Loopcloud is updating seemingly quicker than an iPhone, but as we discover, the latest updates could point to a huge crossover product… 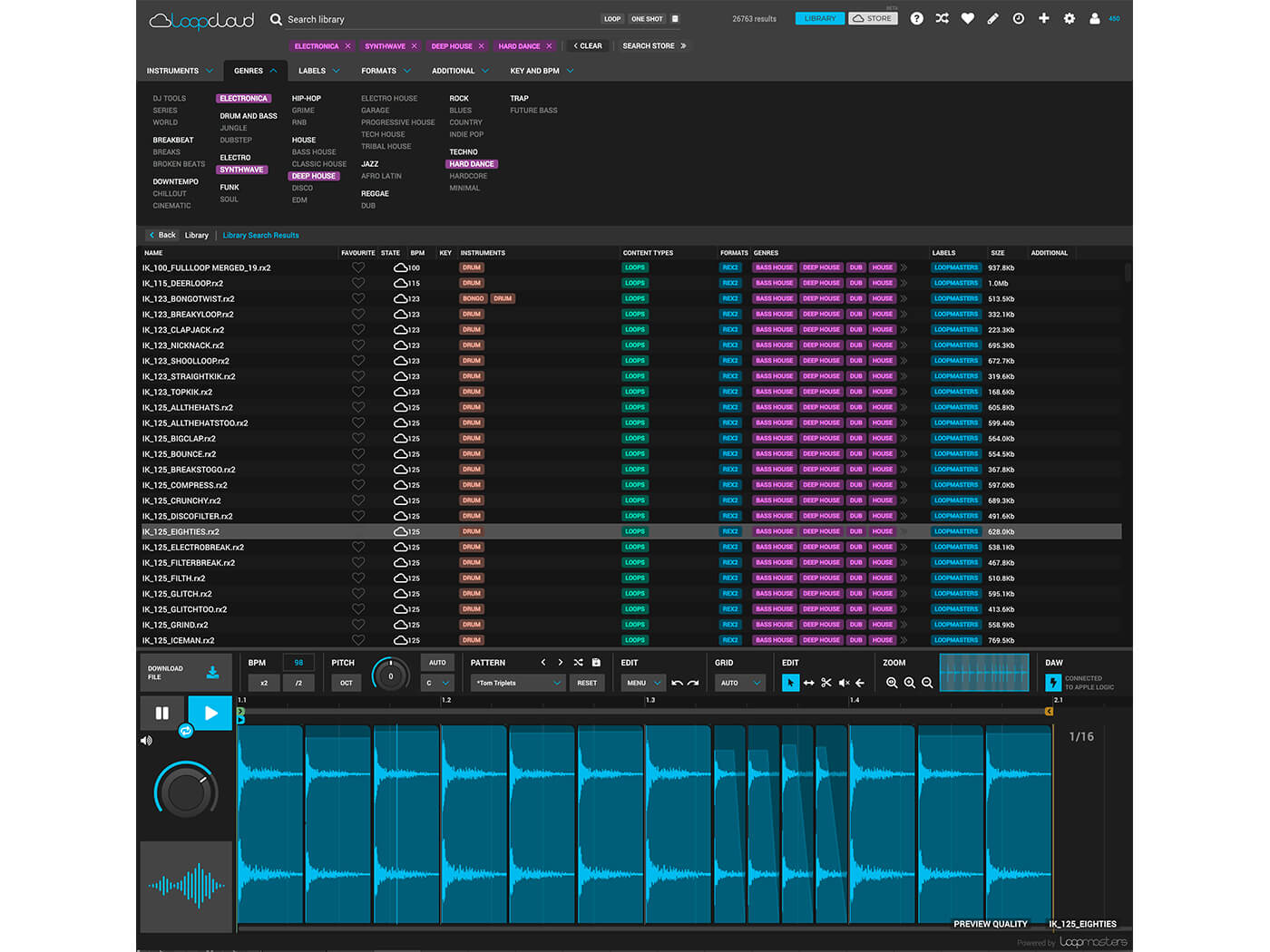 I appear to have used the words “it only seems like xx months since I last reviewed Loopcloud” in at least two of my previous Loopcloud reviews, so rapidly does this sample-management app receive an update. The last version came with the ability to use your own samples in the system – not ‘just’ those from Loopmasters. That was a huge thing, so how can the company top it? We’ll find out soon enough, but here’s a quick recap…

I wish there was a better description, because ‘sample management system’ is just about enough of a phrase to send you to the hills screaming, and really doesn’t do Loopcloud justice. So, essentially, think of it as a colourful Stargate-type system, a portal that sits between your DAW and sample collection – both yours and the entirety of the Loopmasters back catalogue. Say you’re working on a techno track at 140bpm. You open Loopcloud up as a plug-in, then the app, search for techno beats or bass and everything that Loopmasters has ever released comes up in the right key and tempo for you to audition in time with the tune you are working on. Not only that, but everything in your own sample collection that is tagged correctly should come up in the search, too. 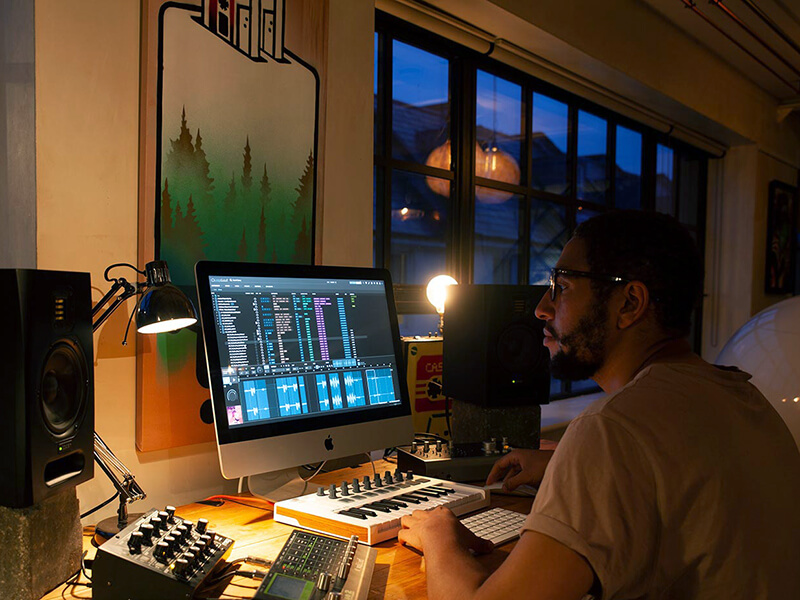 The beauty of Loopcloud is that you can play the search result samples perfectly in real time so you can instantly hear how they work in your mix. Obviously, if you don’t already own the sample, you’ll have to pay for it, but another beautiful aspect is that Loopcloud isn’t like the dark old days where you spend £59 on a collection, only to use the one funk loop you bought it for. Now you just buy the individual funk loop. Yes, you’ll spend more per sample – from around 15p – but you won’t have a mountain of rubbish clogging up your hard drive. So that explains it. I think we’re up to speed. So what’s new? Well…

Four to the floor

I’d advise anyone who either hasn’t used Loopcloud up to this point to read the reviews of versions 1 to 3 on MusicTech.net for the main features of those – using your own samples, auditioning in the correct pitch and time and more – because here, I’m going to focus specifically on v4 and what’s new.

Loopcloud 4 is a free download from its website, some 80MB which somehow expands to taking 200MB of your hard drive. You run it as a plug-in on a track as standard in your DAW and then the Loopcloud application brings all that cloud-based content DAW and it should be in sync. 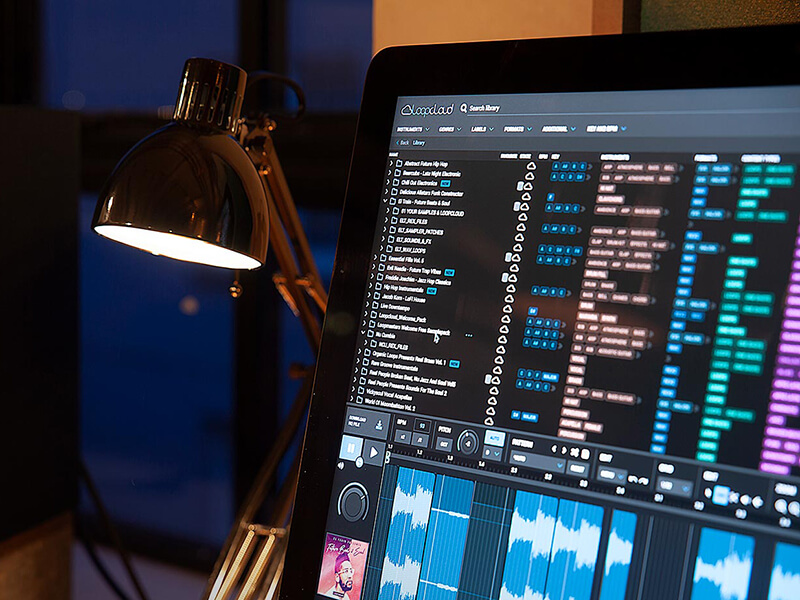 One aspect of Loopcloud I’ve not focused too much on in the past is its pattern-creation abilities, where you can arrange different samples within greater loops as MIDI events. Create patterns or use preset patterns to make loops out of single hits, for example, and then save it out as an audio loop to your DAW when you’re done.

I mention this because it’s essentially this process that has been expanded upon with the all-new Loop Editor. Here, you can now get right inside the audio events, so very quickly adjust volumes by clicking and dragging the tops up or down, adjust fade ins and fade outs (by dragging corners) and, of course, Repeat, Delete, Reorder, Reverse and Slip (nudge left and right).

The quite amazing thing about this is that once you have created a pattern with the same audio hit, all edited and looping around, you can then change the core sample and simply step through different ones to see how they sound. To clarify: you’ve just edited a pattern of the same hits with a speed unheard of, and now you can change the core ingredient to anything else. I shouldn’t be surprised how fast this is, given how slick the Loopcloud philosophy is, but I am.

So far I’ve only touched on a single hit being edited here, but taking that further, you can do all of the above to a complete loop. Split it, edit each component, reorder it… and once again, try whatever edits you make with other loops. It’s easy, and all incredibly creative, especially if you then start loading in loops and hits from genres not in any search. It can be a bit random, but also – like so much about Loopcloud – take you on journeys you might not have considered (which can be a good thing). I should also add is that all of the above is done before you have bought anything from Loopmasters, or even downloaded it! 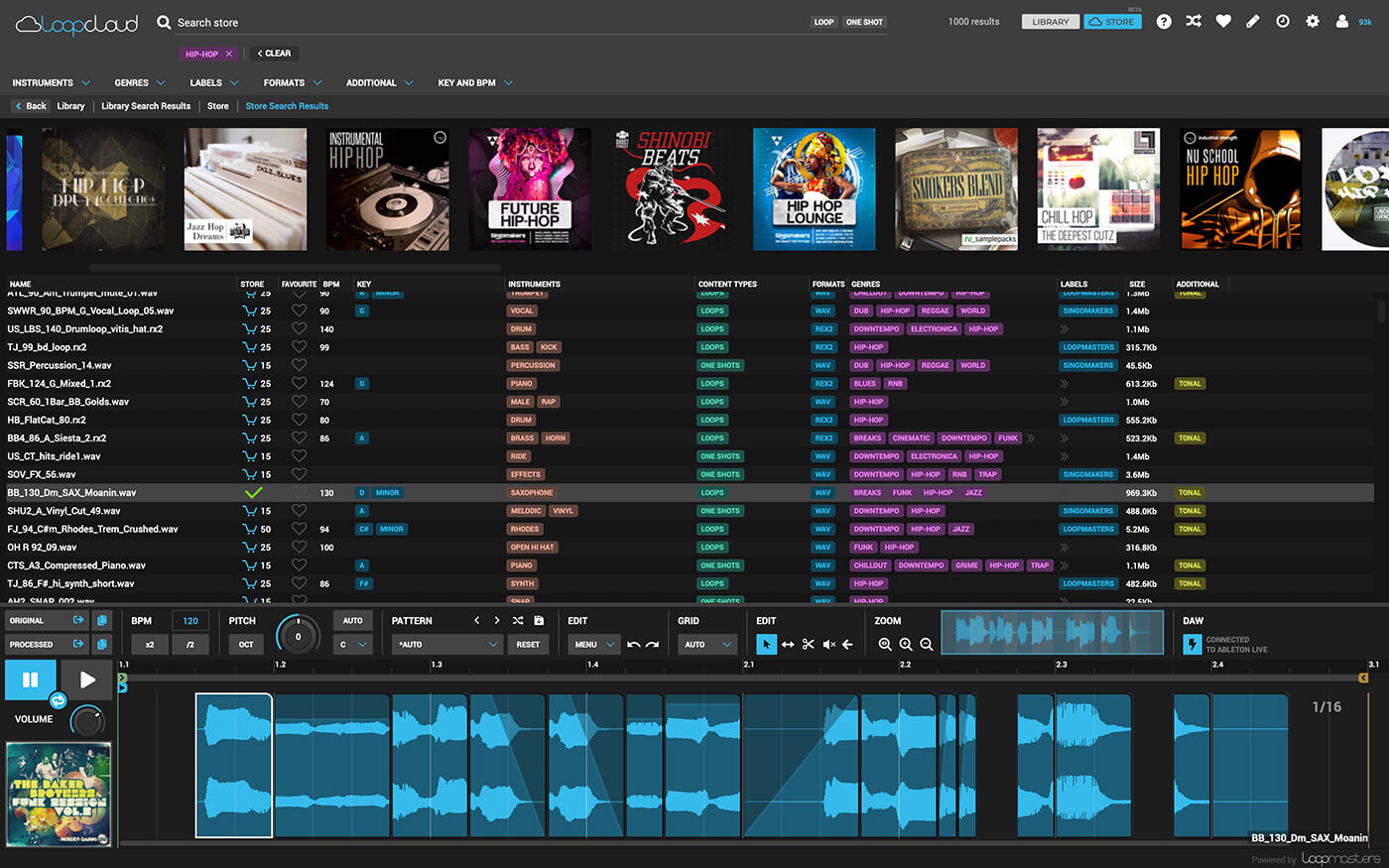 The whole Sample Editor is brilliant in operation. You might find, as I did, you just load in one of the now more abundant patterns to try them out on different loops and hits, rather than edit your own, but either way, it’s enormous fun. There are other features included within version 4, the main one of which is that the plug-in can now accept MIDI inputs. This means that individual hits within loops can, for example, be triggered by way of a keyboard, giving the whole thing more the feel of a sampler.

Other additions include improved tagging to increase search speed, key commands for many of the functions within the new Sample Editor and an improved network performance – and I have to say, with my terrible connection speed I wasn’t feeling I was having any problems this time around. As good as some of these additions are, overall, it’s that Sample Editor that is the big news, and it really is a smashing addition.

No matter how many times Loopmasters adds bits and pieces, it is the initial idea of organising and searching through samples and playing them in real time that will always shine through. It is such a slick process that you’ll wonder how you ever got by without it. Although, as I’ve flagged up before, it might just take any musical ideas you have off in completely wild directions. (Just be prepared to have several different genre-based mixes of the one track you are working on saved!).

And yes, there’s no denying that the slickness of the service also enables slick transactions to be made for Loopmasters samples, but as they give you loads of these when you sign up, plus at least 150 per week, you might never need to do this (if this is your plan, however, be careful where you click and you will be tempted – it’s that easy). 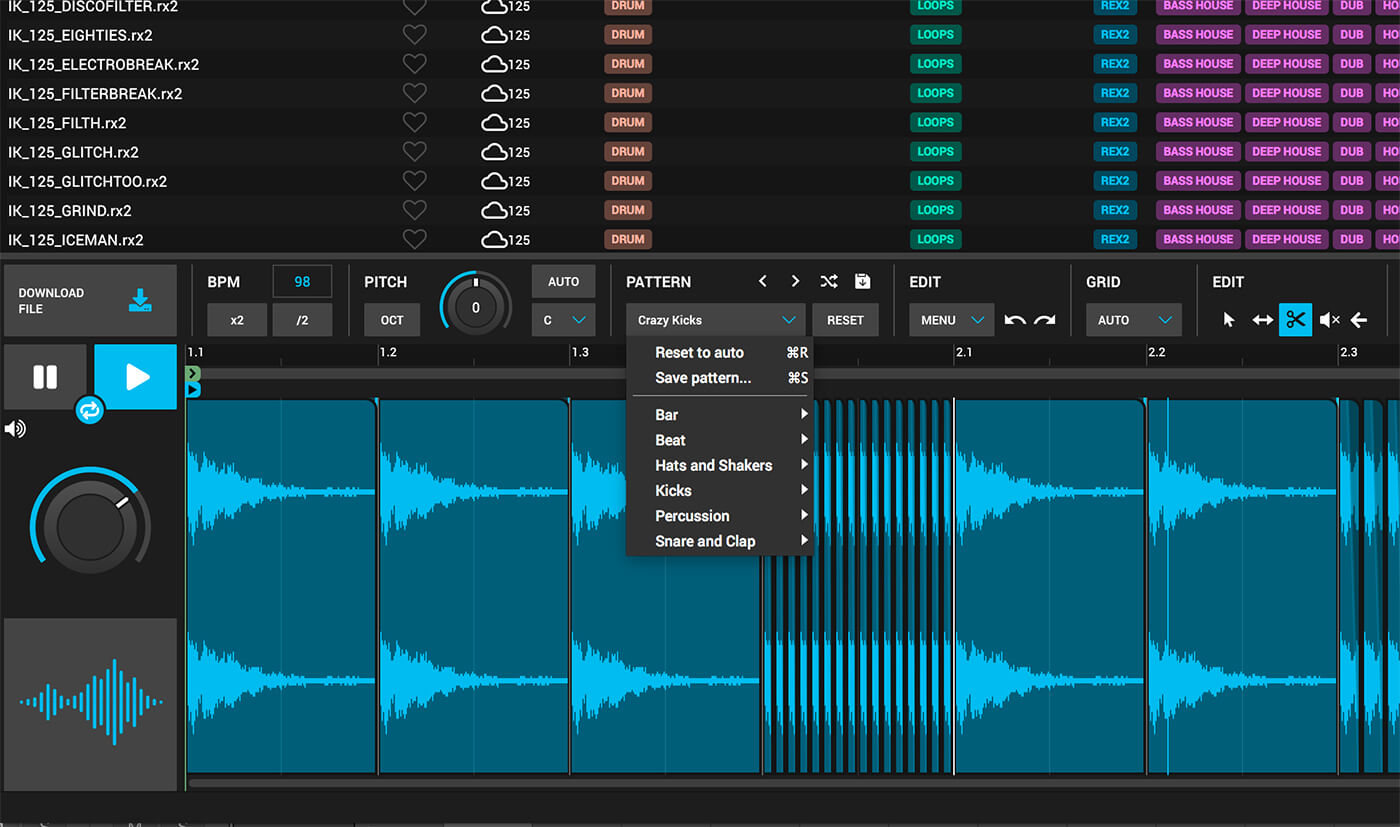 Perhaps it’s where Loopcloud is going that could be the real tempter, though and that’s where the specific new features of v4 come in. You have to wonder: now there is such slick sample editing included and that Loopcloud works so well with your DAW at present, how long will it be before it actually replaces it?

That conjecture aside, it’s hard to fault Loopcloud (that ‘sample management system’ description aside). It’s obviously moving fast and furiously and the Sample Editor does bring a completely new layer of creativity to the app. It’s well worth experiencing if you’ve never been tempted into this particular cloud, and obviously an essential (free) upgrade to you if you have. Being able to change samples so quickly and create different loops and patterns from them has never been so quick, and then going to the core and changing that… I’m only knocking a mark off this time as the latest additions hint at so much more to come and I’ll need headroom back for when the inevitable v5 come our way (probably next week). Otherwise, download it now.

If you’re not a sample user, then obviously not – but you are a rare breed. Most modern producers will have folder upon folder of samples on their hard drives and Loopcloud represents the mallet to the head they need to get these samples in order. Version 4 is also a great way to get in and mess with audio in as slick and quick a way as you’ll have seen. Not ‘essential’, then… until you’ve tried it.

We looked more closely at Splice around a year ago and it’s a rapidly growing business that is more about plug-ins, remixing other artists and a communal feel, although there are sounds to be had and friends to be made. 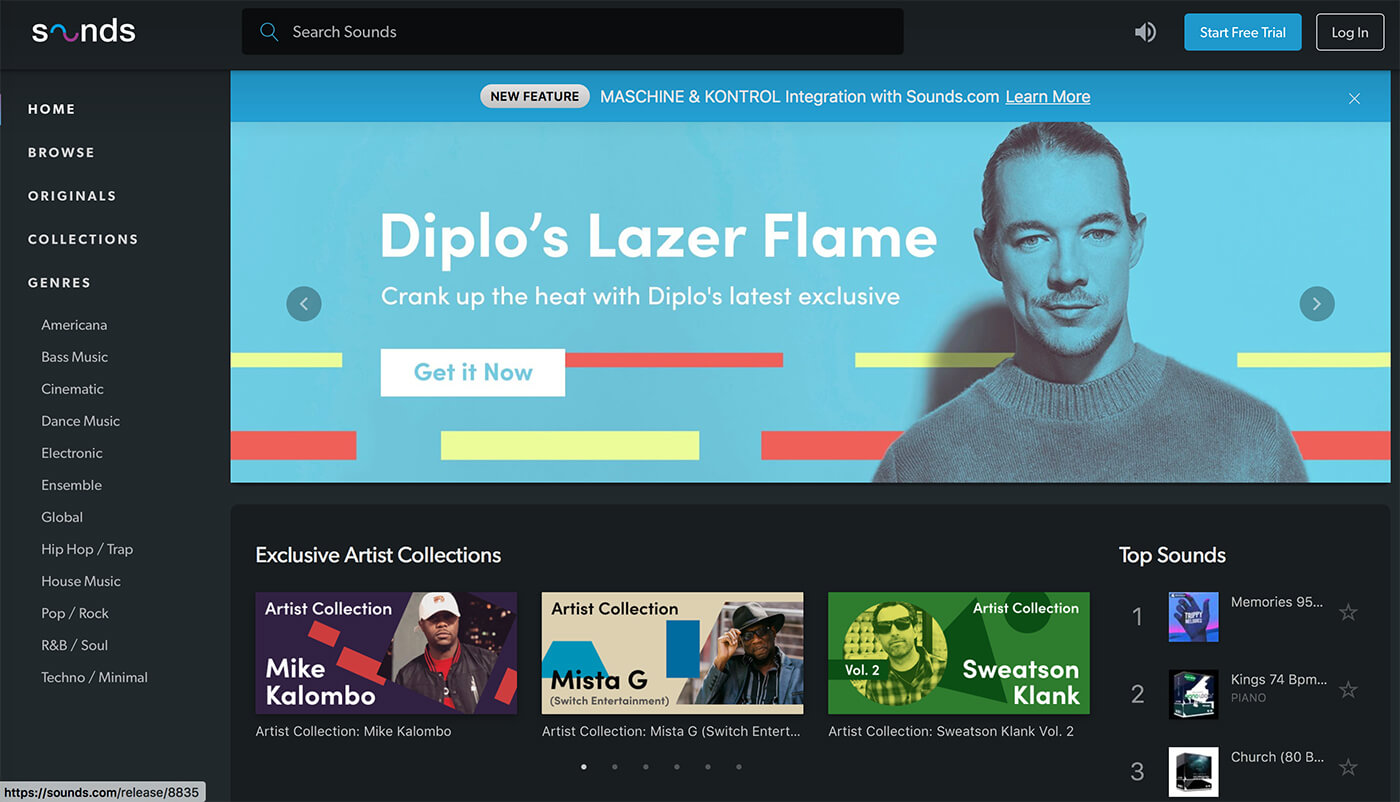 “We’d say this is one to watch,” is what we said last time around and NI has certainly populated its site with more samples and say they are working on better DAW integration, so… we’ll keep watching.

Watch how to edit and audition samples in your DAW with Loopcloud 4.0 here.