Loopcloud is a great way for your DAW to meet audio. V2 means even faster creativity. Is it now too easy to make music? Who cares, says Andy Jones… 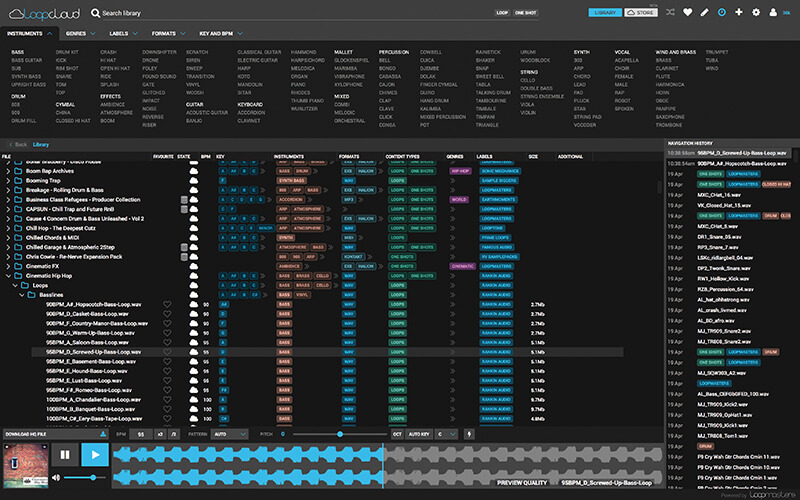 Loopcloud is an impressive system that allows you to interact with your Loopmasters sample collection in ways that can add a lot of positives to your music creation process. You can quickly home in on samples by multiple tag types – instrument, genre, label, format, key or BPM – audition sounds and then load samples with ease.

You can run it standalone or as a plug-in within your DAW and it’s this latter option that most impressed me when I first looked at Loopcloud last April in its v1 format. Essentially you run Loopcloud as a regular plug-in and it syncs the samples to your DAW so you can be playing your tune and matching samples up which play in sync.

For trying out ideas it’s brilliant and you’ll end up taking turns with your music that you may not have considered which can really aid creativity.

With that first version I concluded that ’if you use it properly, as a front-end audio auditioning area for your DAW, it’s a no-brainer, too, as in all likelihood, it will speed up the process. It’s early days, though, so keep an open mind. The future for the plug-in and cloud service could be very exciting.’

Well, that future is here. Version 2 of Loopcloud is out now. It’s still a free download, you get around a gigabyte of free content withmit when you sign up and then 150 samples a week, plus a one-off 500 credits to buy samples in the all-new Loopmasters store.

The store was something I predicted back in v1. The company is giving it away for free plus a bunch of samples each week so the addition of a store to buy new content is no surprise – they have to make the money somewhere.

The 500 credits you get allow you to buy some of these samples (each credit you get is worth 1p) and the big news is that you can buy per sample (from as little as 15p) rather than having to purchase a whole collection of samples, many of which will remain unused (if you are anything like me that is). Folders and packs can still be purchased, of course, and these will work out much cheaper per sample.

Other features that come with v2.0 (or the other big update at v1.4) include better tagging of the samples, an improved GUI, and the very useful ability to audition samples in key with your DAW project. You can then easily drag samples with the right pitch and tempo directly to an audio track in your DAW, all ready to play.

One other big promise – not with v2.0 but I know it is coming – is the ability to load in third-party content into Loopcloud, meaning that it is not just Loopmasters content (and its many and varied sample labels) that sits behind the slick app. You will eventually be able to throw whatever samples you have into the mix. That’s to come though, let’s see how the all-new 2.0 stacks up. 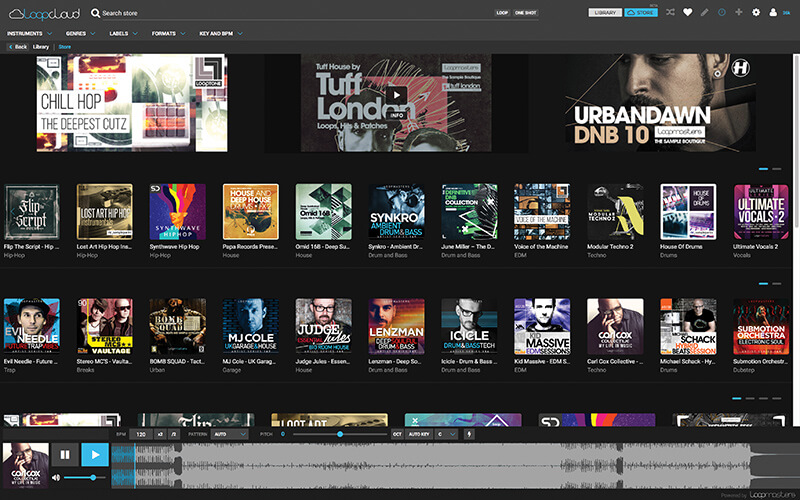 In these days of colossal storage spaces, it’s easier than ever to amass whopping great collections of samples and loops – the hardest part is deciding what to buy, and of course keeping track of what you’ve got. This is where Loopcloud scores best we feel, you’re free to try out a vast range of what Loopmasters have to offer, organised by tag, while making your own music. This allows for speedier music-making.

You’ll need to register at www.loopmasters.com to download Loopcloud for free, and then it’s simply a matter of installing it and running it either standalone or as a plug-in. As I mentioned, this latter way is the way to do it as it runs in sync with your DAW. If you have two screens, you’ll really enjoy using Loopcloud on one while your DAW chugs away on the other as it is best enjoyed full-screen.

All of those main search subjects run across the top with sub categories in drop down areas all nicely colour-coded so, for example, select a sample by Instrument and you’ll home in by choosing from Bass, Drum Cymbal, Effect, Guitar and many more sub categories until you find what you want. Audition playback is in a lower quality for speed, and even with my notoriously bad internet connection I was getting some pretty instantaneous results.

Key auditioning is all-new. You can select the key of your track and then Loopcloud searches for all of the original samples in that key. Better still, Loopcloud’s Auto Key feature autotunes the samples you are auditioning to the key of the tune in your DAW. Simply set it to the key of your tune and whatever you audition should be matched up in that key. And the process does really work and the hit rate was surprisingly high.

Another great feature when auditioning is that you can also process the samples you are listening to with your DAW’s effects in real-time. You can therefore hear exactly how each and every one will sound in the context of your complete mix before committing to loading it.

One word of warning, though. I was testing Loopcloud 2.0 with what started out as an ambient track which I had deliberately stripped back to a minimal number of instruments and tracks.

After working with Loopcloud for an hour, it had three extra piano lines, two pads and a laid-back four-to-the-floor loop courtesy of the rather excellent Berlin Dub Techno collection! The track had turned into something that I’d certainly not intended it to be which might or might not be a good thing (it was good in my case though!).

And, of course, this process could open up many a discussion on the ease of tech like Loopcloud and how it affects our creativity. You could argue that it makes music production too easy, but then you could also argue that about the DAW you are using and just about anything else we discuss in this magazine.

Music production is so often about the choices you make and what you decide to keep or drop in a tune and, while using Loopcloud did sometimes feel a little like I was cheating, it would be churlish to single it out from everything else I use and criticise it. If anything, this is testament to how well Loopcloud has been designed as an application, so I’ll leave any further discussions to the comments section of our online feature!

Loopmasters’ decision to sell per sample is a brave one as people will almost certainly pick and choose a bit more, and I think it’s a good one for us consumers as having fewer samples on your drive (or, in this case, in a cloud) is always a good thing, with fewer options to needlessly trawl through.

I also think more people will buy fewer samples so it should balance out from the company’s point of view too. The store itself is as slick as the sample library and almost identical in operation in terms of searching for what you want and auditioning.

My ambient tune quickly moved on to a thudding and chugging breakbeat extravaganza as my 500 credits started quickly reducing – it really is a very easy process to buy samples. I did have the odd sample not wanting to load into Logic after purchase but it did work eventually. Finally, a quick note on the credits. It’s a pay-as-you-go system – not subscription (hurrah!) – so you simply top them up as you go.

Loopcloud 2.0 is a slick successor to v1.0 with some neat additions. The Auto Key auditioning is my highlight and I’ll probably end up using it to finally finish off some tunes I’ve had festering for a while or turn some old looped ideas into full arrangements.

And that is the real killer result that Loopcloud brings. It’s not just about sample management – even though it does that incredibly well. It’s about nudging – OK, kicking – your creativity in the right direction and Loopcloud does that with some aplomb. 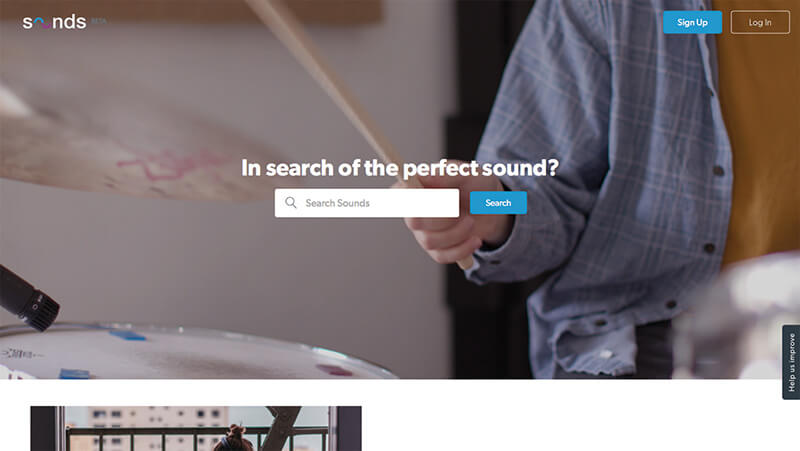 NI’s sounds.com has been described as Spotify for samples. You can search for samples by genre but at the time of writing it was still in beta so we haven’t had the chance to compare. 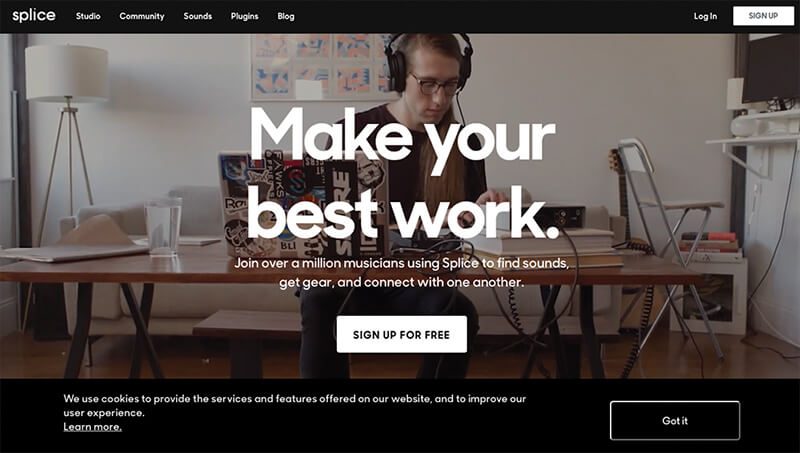 Splice.com does sounds and a toolbox of plug-ins for various subscription fees and there’s a focus on collaboration and top producer advice and content. (And people making cool music on cool tables.)