An ultra-rare synthesizer recreated in software and brought into the 21st century with a surprising price. 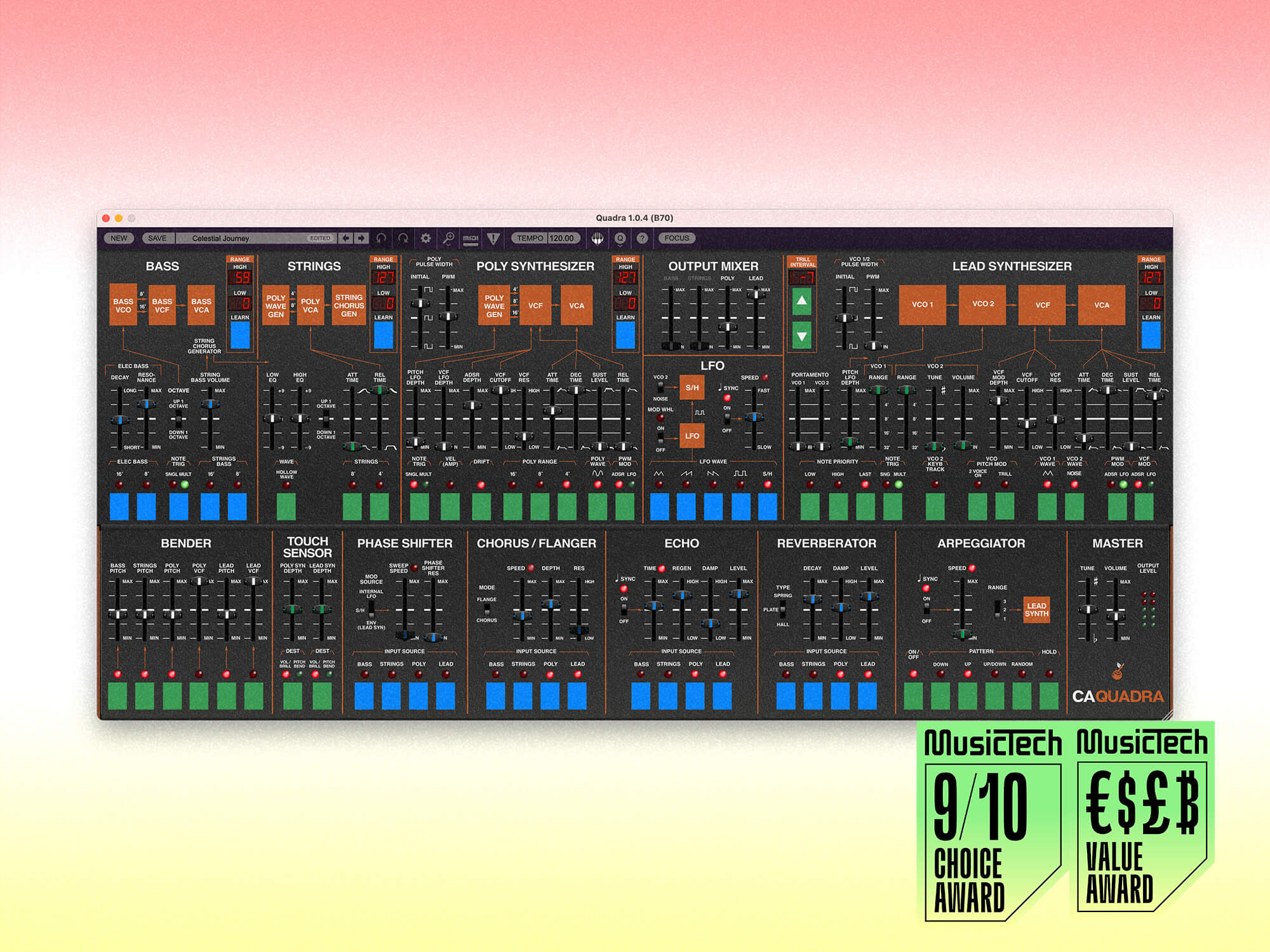 Cherry Audio continues to release software at an impressive rate, and its latest is a recreation of the notoriously rare ARP Quadra. The 1978 titan of a hardware synth is still highly sought-after for its incredible sound. Unlike many vintage synths, the Quadra has never been modelled in software before now, showcasing Cherry’s penchant for tackling more esoteric hardware.

As you’d hope, the developer has expanded on some areas where the original synth had weaknesses, such as its patch storage system. Cherry has also added extra effects and various other performance enhancements. The result is an incredibly affordable and authentic-sounding synth that offers plenty of fun for beginners, while also a joy to those who prefer a deeper dive into sound design.

Coming in all major plug-in formats and as a standalone app, installation is straightforward, with the instrument’s preferences section letting you manage its behaviour. Its window is scalable, and a Focus button lets you zoom in on the controls and scroll around for better access to even the smallest parameters.

As with Cherry’s other soft synths, MIDI Learn is available throughout the instrument, and a pop-out MIDI CC window lets you easily manage MIDI assignments. Master undo and redo buttons allow you to revert settings to an earlier state by multiple steps. When running as a plug-in, two versions are available – one running in mono/stereo and one as stereo or multi-output with up to five stereo channels so that you can process different sections of the synth independently.

Four to the floor

Quadra’s layout comprises four distinct sections that are fully tweakable, covering a different category of sound – bass, strings, polysynth and lead synth. Each section is independently assignable to any keyboard region for endless splitting and layering flexibility using the key range controls with a handy Learn shortcut. So in practice, you can swiftly assign bass sounds across the low keys, strings to the middle keys and blend the two synths across the top range, for example. There is, of course, an output mixer where you can set a level for each section and a master output section with a global tune control.

Each of Quadra’s sections uses a variety of buttons and ARP’s signature sliders to control the sound, with arrows helpfully linking sliders to block diagrams in orange for an easy indication of how the signal path works. While the bass section on the original hardware could only be assigned to the lowest two octaves of the 61-note keyboard, this digital version lets you use the entire keyboard. Although, the bass remains monophonic with a “multi” note trigger option. There are two basses – electric and string – both with two voices and an octave control.

The String section can also use up to two voices for a richer sound and has 8′ and 4′ polyphonic waveform generators and a preset called Hollow Waveform for a more ethereal tone. There is a two-part EQ and octave control, attack and release sliders. It’s a classic 70’s-style string synthesizer with a lush and warm tone.

The Polysynth section steps things up with saw, variable pulse, Spike and Hollow waveforms with expanded range, and a drift button for more organic, analogue-style tones, along with variable polyphony at four, eight or 16 notes. 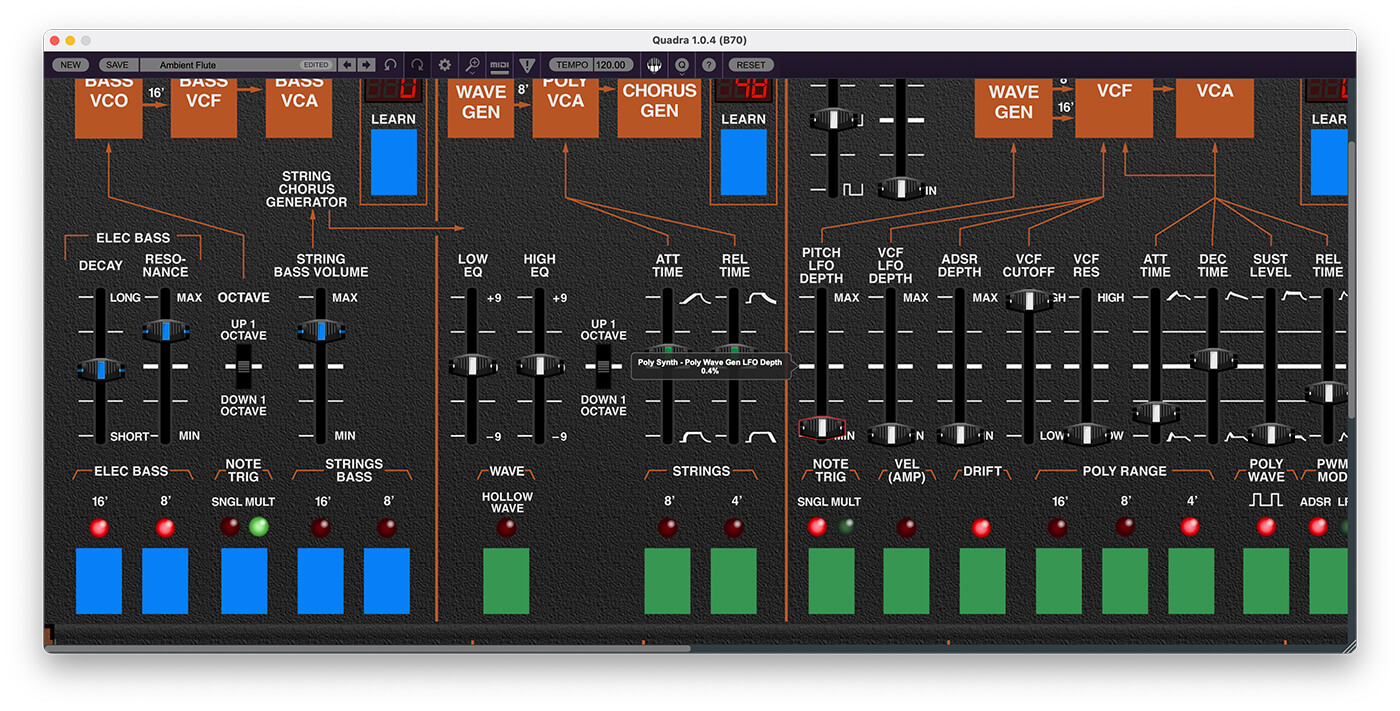 The Lead section is capable of some truly piercing sonics. The dual-oscillator design includes ramp, pulse, sine, triangle, and noise waves. There’s also LFO- or envelope-controlled pulse-width modulation, two-voice split mode and independent oscillator portamento controls. The Lead synth can use the onboard arpeggiator with variable speed and modes to add movement and patterns to your lead parts. It’s straightforward to use and immediately recreates classic prog rock or electro vibes, particularly when synced to your project tempo.

Cherry has recreated the original Quadra’s onboard phaser, and, like the other effects, you can route any or all of the four source sections through it. It adds a distinctly retro sweeping character to your patches, with controls for its various parameters. Cherry has added three more effects, too – a chorus/flanger stage, a studio-quality reverb with plate, hall or spring types, and a tempo-syncable echo unit. Whether you’re going with the 70s stylings of the chorus and phaser or sticking to a cleaner spacious effect with echo and reverb, the effects section really helps bring the instrument to life.

There are a few other interesting controllers in addition to an LFO section with multiple waveforms. The Bender section lets you assign different bend amounts to six parameters: bass and string bend and poly and lead synth bend, and VCF. This means one movement of the pitch wheel works differently across the assigned destinations. It’s a cool effect – bending one sound at twice the rate of the other, for example. However, with mismatched settings, it produces some jarring tonal results. Finally, there’s a section for assigning aftertouch sensitivity’s effect on poly and lead synth volume or pitch bend amount. 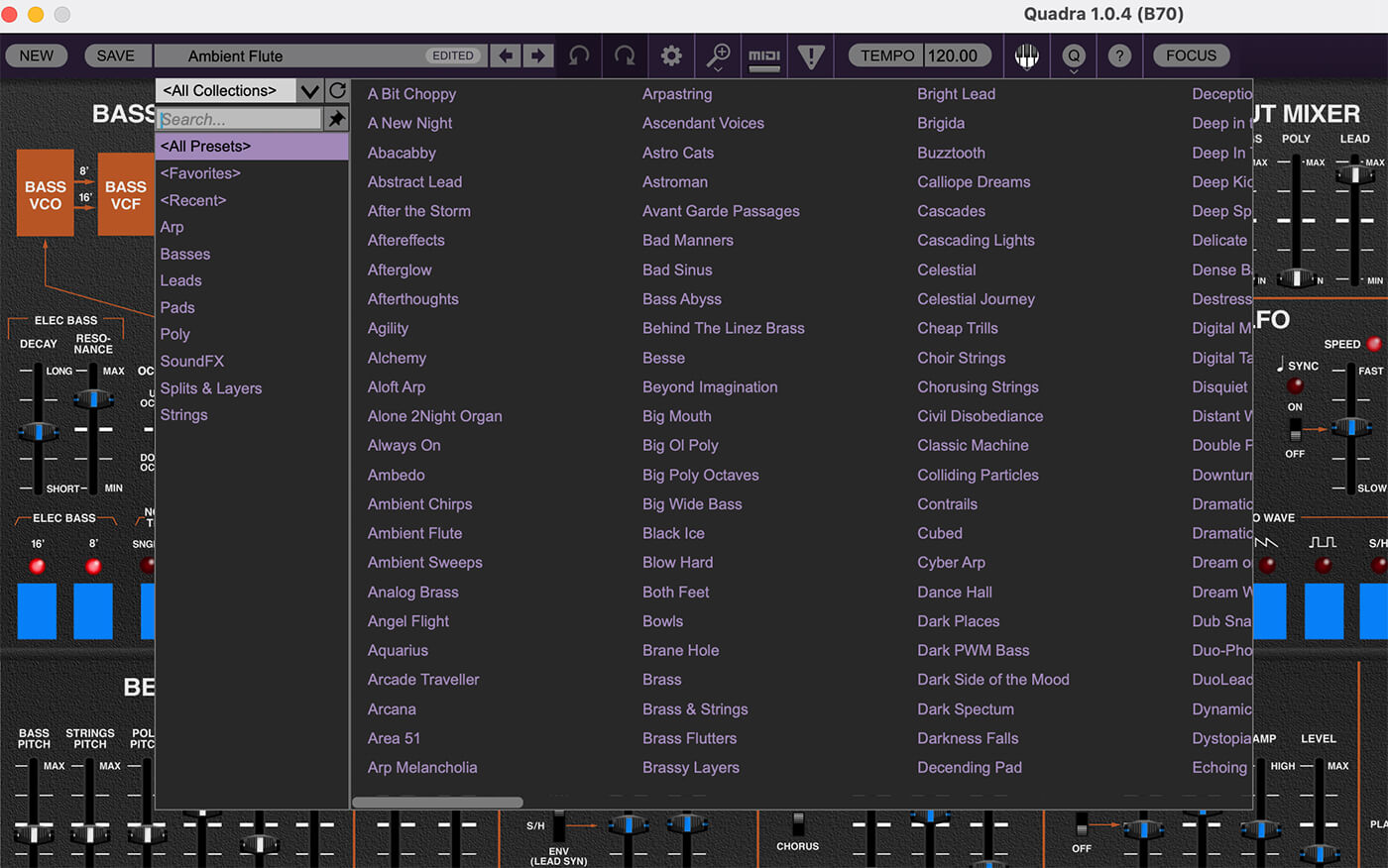 Quadra boasts over 400 presets that cover plenty of ground, thanks to the distinct four-section design of the synth. Amongst some fairly generic presets are deep, powerful basses, rich phased strings, lush polysynths and screaming lead parts to enjoy. These can be layered and blended together for some seriously interesting sounds.

It’s rare for a polysynth to have each of its voices dedicated to a particular type of sound. The results you can get with Quadra are varied and impressive, whether you’re an electronic producer, sound designer, alt-rock lover, or anything beyond. Despite looking complicated, Quadra is actually pretty easy to wrap your head around. Once you start thinking of it as four sections, it rewards experimentation and is highly usable in just a few clicks.

As is standard with Cherry Audio’s catalogue, Quadra is competitively priced at just $59 (on offer for $39 at the time of writing) and is probably the only way you’ll ever get the authentic Quadra sound in your setup.