Panasonic SoundSlayer SC-HTB01 review: A compact soundbar that fits both small spaces and your audio needs

This small, gamer-centric soundbar packs a punch at a very nice price tag. 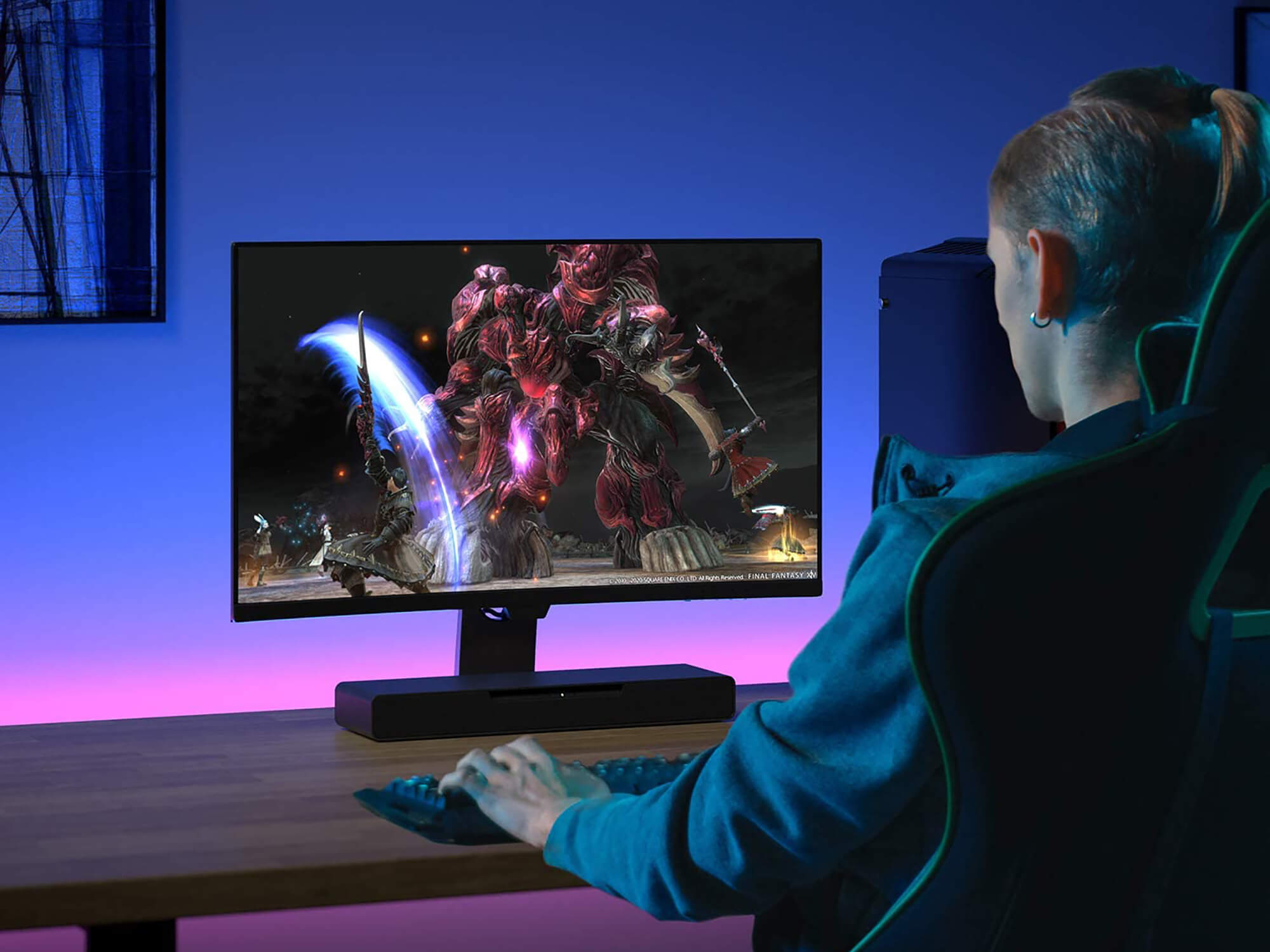 
The Panasonic SoundSlayer SC-HTB01 is a mini soundbar aimed at buyers who want to give both TV viewing and gaming a boost in the audio department. Nicely priced and very compact, it’s also ideal for buyers on a budget who don’t have a lot of space or a massive 65-inch TV dominating their living room.

The SoundSlayer cuts across a lot of demographics, and Panasonic is hoping that people who’ll want to quickly pivot from Fortnite to Fargo will pick this as their sonic weapon of choice.

Featuring five drivers arranged in a so-called ‘2.1’ format – that’s two tweeters, two full-range drivers, and one upward-firing woofer – the SoundSlayer promises to be a small but powerful package that’s capable of supporting 3D sound standards, including Dolby Atmos. Alongside these drivers, Panasonic has included a passive radiator to push bass frequencies further than a soundbar of this size could otherwise manage.

And all for a very agreeable price too – even if you’re not too bothered about gaming, you might be tempted by the price alone.

The SoundSlayer SC-HTB01 is really tiny, measuring just over 5cm high. This means it’s small enough to fit most TV stands or underneath most TV sets and gaming monitors. However, the fact that the upward-firing bass speaker and passive radiator is set in the centre of the soundbar means you won’t want to have it directly under anything.

Unlike a lot of soundbars which place a premium on style and design, the SoundSlayer SC-HTB01 is decidedly un-flashy. Given the gaming angle, you might expect there to be gaudy rainbow RGB striplights along the side; but in reality, it’s a simple dark grey box.

A cloth cover on the front hides the tweeters and mid-range drivers and a central bank of LEDs which flash orange and green whenever you activate any of the different sound modes or adjust the volume. Controls for volume, Bluetooth pairing, and the power key are tucked away on the right-hand side, as for the most part you’ll use the supplied remote to control the SoundSlayer.

The remote control Panasonic includes with the SoundSlayer SC-HTB01 is also pretty spartan, and we wish that a bit more attention to detail had been paid here. Not only is the remote small and cheap-looking – it feels cheap as well. Thankfully, the control layout is sensible, and easy to get used to. It gives you everything you need in terms of adjusting volume and playing with the presets, or pairing the SC-HTB01 with other devices via Bluetooth.

In terms of connections, you get two HDMI ports, for input and output, with the output socket supporting ARC (audio return channel), which lets you connect it to your TV and adjust the volume using your TV’s usual remote. There’s also a USB port for system updates and an optical audio port for buyers with older TV sets, but using this means you won’t be able to enjoy content with 3D sound standards like Dolby Atmos or DTS:X.

As the SoundSlayer SC-HTB01 doesn’t feature any Internet connectivity or a mobile app to play with, there’s very little to do in terms of setting it up beside connecting it to the mains and then your TV or monitor via HDMI.

It’s very much a plug-and-play operation – once you’re powered on and connected, that’s pretty much it. The only tinkering you might have to do is to ensure that your TV has detected the SC-HTB01 and you’ve got ‘HDMI Receiver’ selected as the audio output source.

While you can’t manually adjust with specific frequencies as there’s no equaliser, you can at least raise and lower the volume of the low-end speaker using the slightly misleadingly labelled ‘Subwoofer’ button on the remote.

You can also pick from a number of presets. The first three, Standard, Music, and Cinema, are designed for TV viewing.

For the most part, you’ll want to stay with Standard, which offers a well-balanced mix. Music mode gives bass frequencies a push, while Cinema places an emphasis on background music and ambient detail.

Whichever of these presets you’ve got selected, you’ll always have the option of actioning Clear Dialogue, which raises both the volume of speech and places it higher in the soundstage. It’s pretty effective, and works much like the speech enhancement modes present on bigger, more expensive soundbars, so it’s great to see it included here.

Sadly, there is no equivalent of a ‘night mode’ setting, which sees bass frequencies reduced for the benefit of not keeping other housemates awake. It’s a small omission, but one that’s a common feature on most soundbars. Another snag is that there is a delay of about a second when switching between presets where all audio cuts out – not great if you’re listening to music.

Sound quality is generally very good, and the soundstage feels a lot broader than you might expect considering the size, with plenty of detail and depth.

Dialogue on streaming content and broadcast TV shows always sounds clear and sharp in whichever of the preset modes we engaged, and the Clear Dialogue mode works very well in every situation we tested.

It’s not without its limitations though – rarely, if ever, does sound from Dolby Atmos content actually feel like it’s coming from above or behind you, as it has done on titles on other, more Atmos-supporting soundbars.

While no games I had on hand featured Dolby Atmos sound, the SoundSlayer was generally good at pushing atmospheric noises in The Legend of Zelda: Breath Of The Wild and The Elder Scrolls V:Skyrim to the sides of the soundstage, and going from quiet to loud quickly during fight scenes, making things more immersive and dramatic.

Music streamed via Bluetooth 2.1 is also generally great, provided you don’t crank things up too loud, as limitations in the bass department become apparent. Separation is fantastic, with vocals placed low in the mix, as they are on Billie Eilish’s I Didn’t Change My Number; along with the verses of Peter Gabriel’s Intruder sounding clear and distinct at all volume levels.

There’s plenty of detail present on acoustic guitar tracks like Doc Watson’s Dill Pickle Rag, and Steve Howe’s Mood For A Day, and you can easily pick out the reverb tails of drum hits on tracks like Bauhaus’s She’s In Parties, Peter Gabriel’s Intruder, and of the vocals on Dead Prez’s Hip-Hop.

The prominent bassline of Hip-Hop sounds mighty through the SoundSlayer at moderate volume levels, but push it too high and you can hear that it start to lose definition and merge with the kick drum sound.

Likewise, the treble and mid-range on Dave Brubeck’s Take Five generally sound superb, provided you don’t push it. The clattering drums sound magnificent at reasonable volume levels, but when pushed all the way up, things get messy.

On the whole, sound quality is really quite incredible when you consider both the size and the cost of the SoundSlayer, $249.99/£249.99, or roughly half the cost of a Sonos Beam (Gen 2).