BLEASS’ popular iOS synth has landed for Windows and Mac, but how will a synth designed for a tablet’s performance fare in the desktop arena? 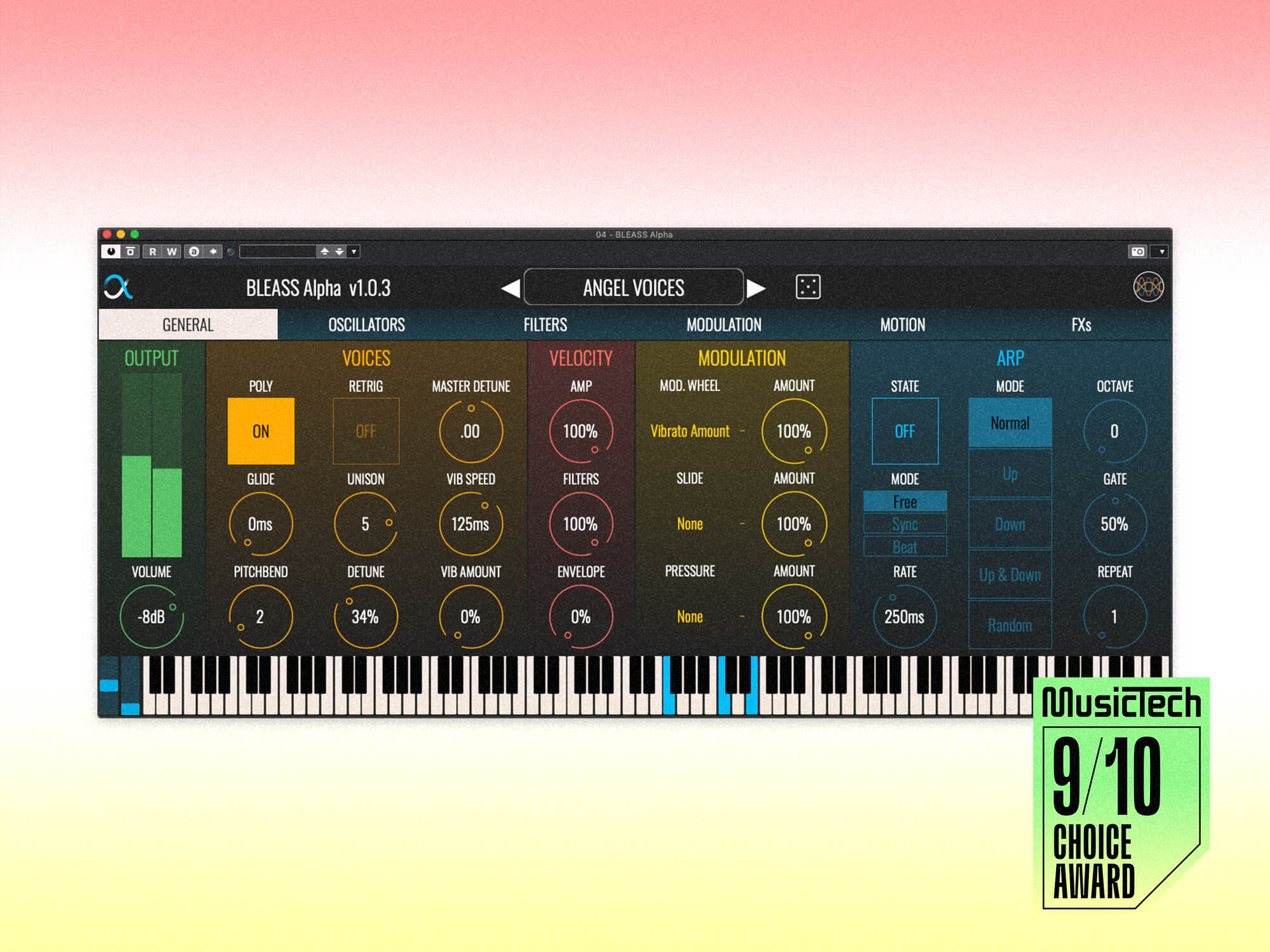 This stylish synth is great fun to use, and shows that you can sound like a beast without being a lumbering behemoth.


Launching back in 2018 with the popular Groovebox app, French plug-in developer BLEASS has steadily built up an impressive catalogue of audio tools and processors.

Initially, the company focussed its efforts on apps and AUv3 plug-ins for iOS, but 2021 has seen BLEASS spread its wings into new territory. It has since ported its extensive library to run on desktop-based AU and VST3 hosts, with the latter being compatible with both macOS and Windows.

The latest plug-in to get the desktop treatment is the Alpha Synthesizer. Inspired by classic analogue synths, the rich, characterful tones pumped out by Alpha, coupled with BLEASS’ signature stylish interface, have made it a hit amongst iPad-based music makers.

But how will it fare against the CPU-munching heavyweight synths of desktop land? Turns out, remarkably well.

At the core of Alpha are three analogue-style oscillators that, rather than provide a fixed choice of basic waveforms, are able to morph between them. The morphing is super-smooth, with no audible stepping or quantising, and takes in some familiar stops along the way, from sine, through triangle and saw, to pulse. This isn’t a unique feature, but it certainly imbues Alpha with a very wide and varied sonic palette from the outset.

The three oscillators all have slightly different options available to them. Oscillator 3 is simple, with only octave and pulse width control, but oscillators 1 and 2 add coarse and fine pitch control, along with a rather natty Stereo parameter that offsets the phase of the waveform’s right channel.

In basic use, this makes for a wider, less centralised sound, but it can also create fascinating results when used in conjunction with oscillator 2’s ring modulation, frequency modulation and/or hard sync options, all of which are driven from oscillator 1.

The mixer also allows a noise signal to be blended into the sound, with the overall output level under the control of a dedicated amp envelope. This, like Alpha’s other envelopes, is a straightforward ADSR affair that offers up to a massive 16 seconds of attack, decay, or release time. A helpful graphical representation of the envelope overlays the fader-style controls.

Alpha’s filter section provides two identical multimode filters wired in series, each offering a choice of low-pass, high-pass, band-pass or band-reject filtering. Each filter features a large graphic panel showing its current filter curve, and in which one clicks-and-drags to modify the filter’s settings – left to right for the cutoff frequency, up and down for the resonance. A dedicated filter envelope is hardwired to filter cutoff frequency, with each filter having an independent envelope strength dial.

Key tracking, however, is notably absent, and so there is no way to have the filter open (or close) for notes played higher up (or lower down) the keyboard. Similarly, playing velocity can’t be mapped directly to filter cutoff either, although it can modulate the filter envelope strength – which is an acceptable workaround.

Further modulation sources are provided in the form of an auxiliary ADSR envelope generator, a pair of LFOs, and the rather fun Motion Sequencer. The LFOs offer a standard choice of waveforms – sine, triangle, saw up, saw down, square and sample & hold – and can run freely with or without note-on re-triggering, or synced to your DAW.

The LFO visualisation – a rising and falling coloured bar – is simple, but proves to be a very intuitive way of understanding what the LFOs are doing and how they may interact with one another.

Alpha’s Motion Sequencer is a step sequencer designed to pump out modulation values. A sequence can be up to 16 steps long, and can be driven by note-on triggers or synced to your DAW for more rhythmic results. Like the other modulation sources, the Motion Sequencer can be routed to any two destinations which, while slightly limiting, is much easier to work with and manage than a complex anything-to-anywhere modulation matrix.

Globally, the synth can operate in monophonic or polyphonic modes, and has a simple arpeggiator built in. There’s also a unison feature that can create up to six copies of the sound, with a controllable amount of detuning between each copy – when cranked to the max, this makes the Alpha sound huge.

The Alpha Synthesizer comes with an included library of over 200 patches, which are categorised and easily browsed using the built-in preset manager. On top of this, additional patch packages, created by acclaimed producers and sound designers, are available for between €4 and €7 ($5–$8). The entire library of over 500 patches can be unlocked for €30/$35.

Alpha’s iOS origins do show strongly in its interface, which is clearly designed with touchscreens in mind, but this is not a bad thing – in fact, it’s brilliant.

The synth looks modern, stylish and colourful; its settings and parameters are easy to read; and it manages to retain the tactility of a touchscreen interface despite having to use a mouse pointer to interact with it.

Another clear advantage that carries over from the iOS version is the impressive efficiency of the plug-in – not that there’s anything lightweight about Alpha’s sound. In fact, when we heard Alpha’s full-bodied, rich, characterful tones, it left us wondering what so many other synths actually do with all of the CPU cycles they gobble up.

The flip side to this efficiency can be seen in the modulation routing restrictions and the relative simplicity of the synth engine. But these aren’t negatives as much as part of the Alpha’s charm, as they can make it all the easier to generate great-sounding, original synth patches.