Much has changed since Roland’s first incarnation of the SP-404 back in 2005, but this updated model repositions the brand as a leader in hardware sampling once again. 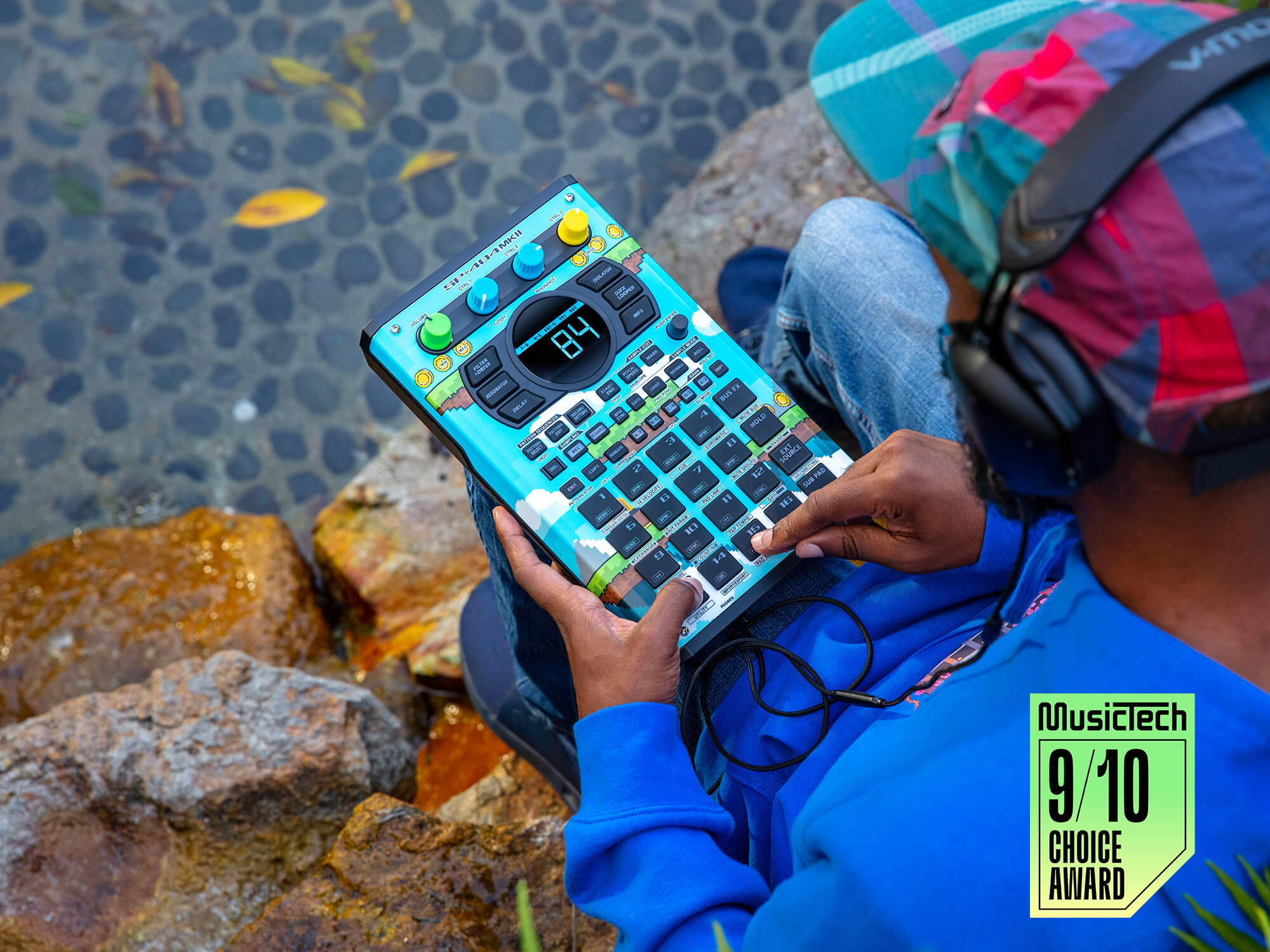 
It’s something of a statement for Roland to call its hotly-anticipated SP-404 update the ‘MKII’, considering there have been two revisions of the SP-404 since its original release in 2005 – the SP-404 SX and SP-404A. Much has changed in the hardware sequencer-sampler landscape since then. Akai, for instance, has flexed its muscles with a formidably updated MPC range, while Elektron’s Model:Samples and incarnations of its Octatrack have established themselves as leading lights. Can Roland keep up?

The MKII features new software, modes, effects, inputs and outputs. Roland packed heaps of functionality on the original SP-404 range’s compact interface, and the MKII takes this even further. Most conspicuous is the inclusion of an extra row of sample pads and a detailed OLED screen, complete with rotary encoder, that replaces the occasionally-cryptic seven-segment display found on previous models.

It looks impressive, feels premium and boasts some nice coloured LEDs to boot. 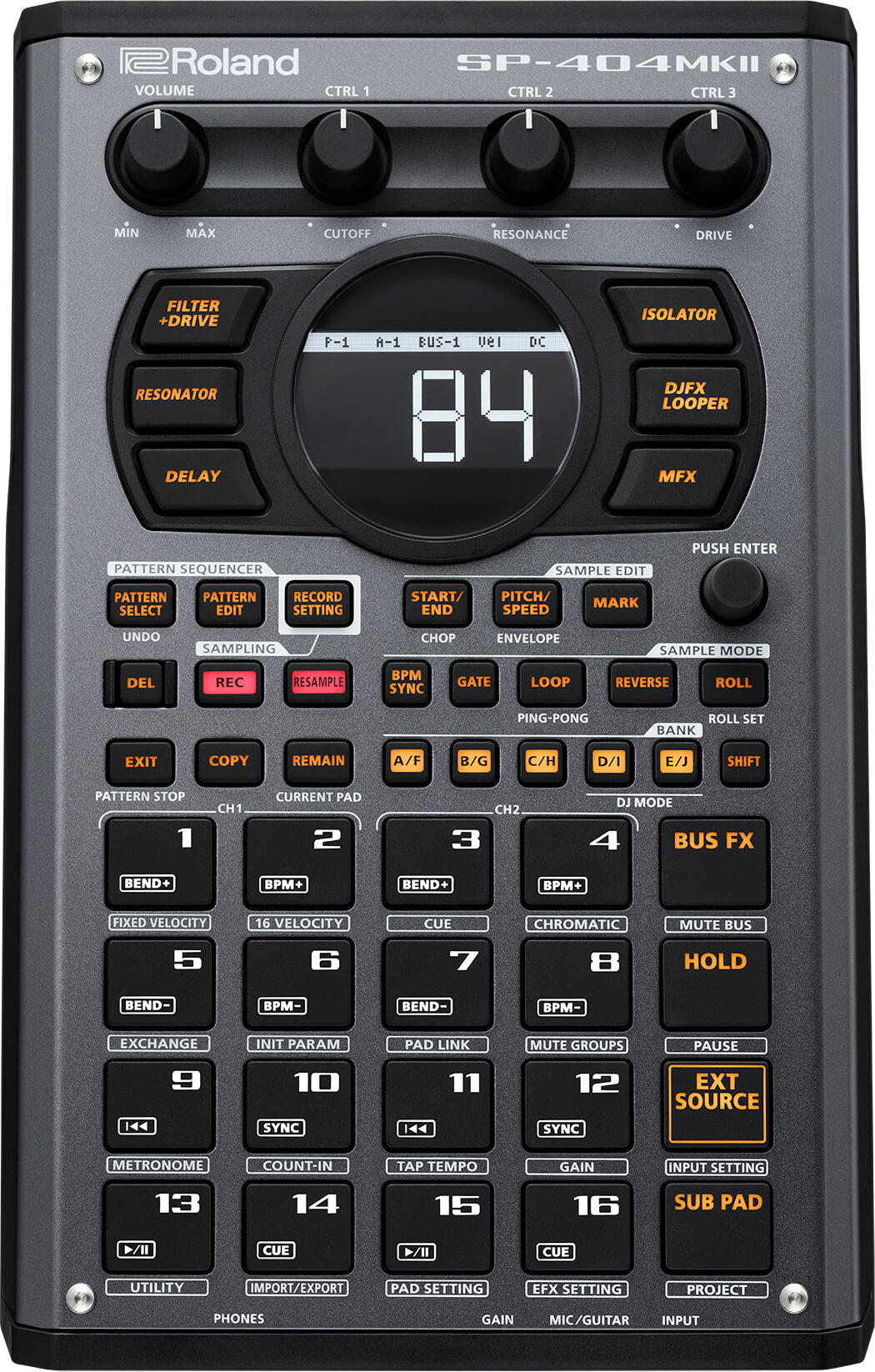 After the SP-404A’s eyebrow-raising black and neon-green finish, which was intended to pair visually with the AIRA TR-8, Roland has thankfully reverted to a classic style for the MKII, opting for a sleek grey and black finish. The MKII is noticeably bigger than previous models, and packs a massive 16GB of internal memory under the hood and the capacity for up to 32 voices of polyphony for sample stacking.

If you’re a visually-minded person, the OLED screen is a gift from heaven.The screen is white-on-black, which not only looks smart but also suits a low-light live setting well.

Roland has done well to maintain the quick two-button shortcuts that constituted the workflow of previous SP-404s and avoided too much menu-diving. Screen menus are in place to edit things like pad sensitivity and LED brightness, check firmware versions, back up data and so on.

It’s clear that Roland wants the SP-404MKII to be your musical best friend, and in this respect, they’ve succeeded. The brand has beefed up the sampler’s connectivity options for the modern producer, particularly in the computer and tablet department, and it’s also ideally shaped to slide into your backpack. Plus, with the capacity to run on battery power, it need never leave your side. Campfire sample jam, anyone?

Roland has always marketed the SP-404 range toward hip-hop producers and those making sat-back, lo-fi beats. But there’s truly no limit to what’s possible in any kind of music with the MKII’s sampling potential and flexibility at your fingertips.

Pressing a pad and then the Start/End button reveals a glorious visual read-out of a sound’s waveform – enough to light up the eyes of anyone used to the sample editing interface of previous SP-404s.

There’s a supremely handy three-stage envelope editor that makes optimal use of the MKII’s screen to display a real-time envelope graph above a chosen sample’s waveform. Ease back the attack on a sound to create a side chain effect, for instance, or give it a sharp attack and quick release time to create more percussive sounds out of almost any raw material. 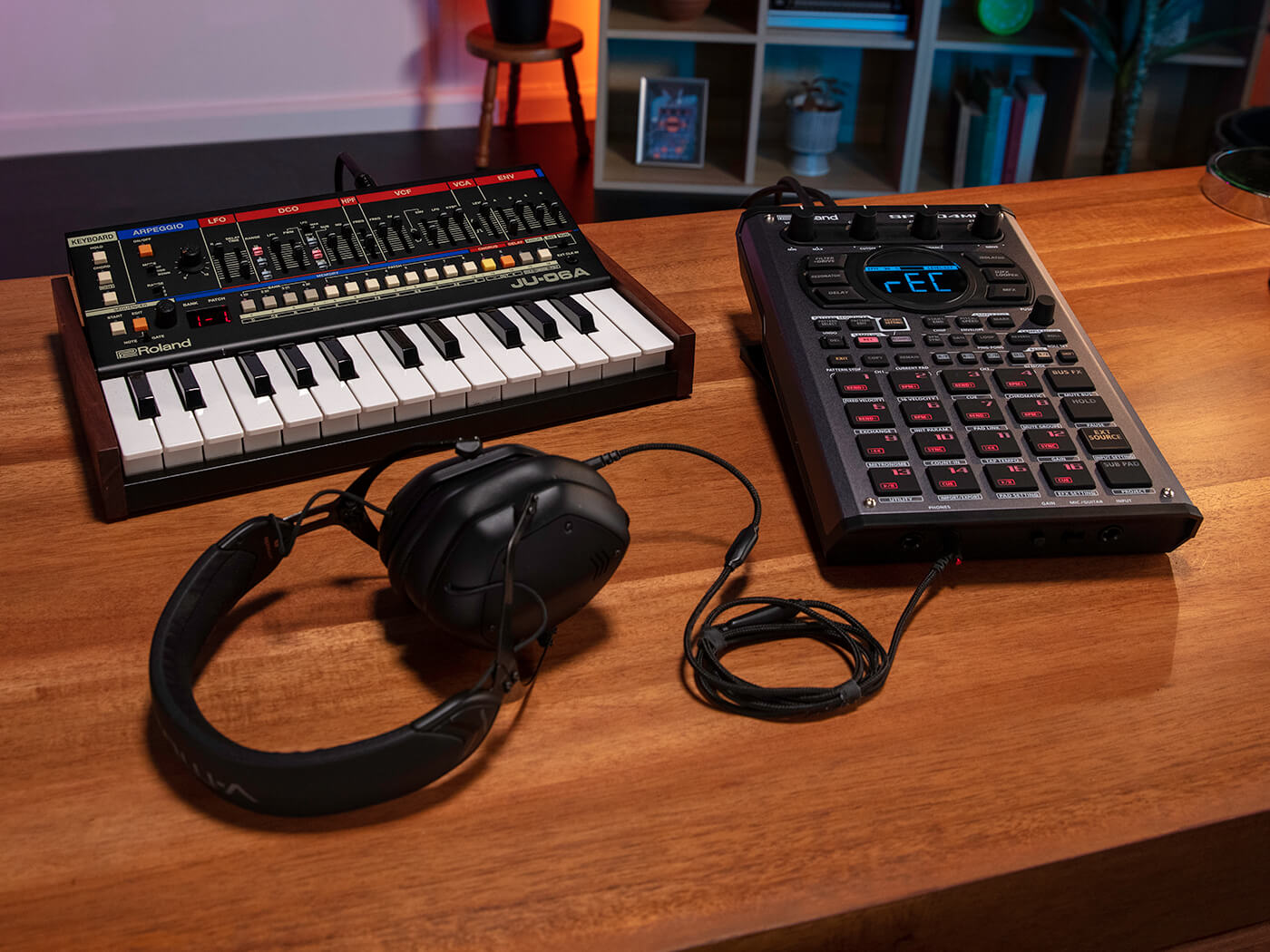 One new feature of the MKII is real-time sample chopping. With this activated, you simply hit a pad to begin playback of a sample, complete with a waveform and moving playhead on the OLED screen. Hit subsequent pads to insert Chop markers into it. These can then be triggered as start points within the original sample, opening up great potential for dynamic, hands-on performances of longer sounds.

You can zoom in on the wave up to 11x and manually adjust the markers if any of your chops aren’t quite on the button. It’s also possible to apply an Auto-Chop mode that subdivides a sample based on various criteria, such as amplitude or time division.

Despite the MKII’s enhanced computer compatibility and vastly updated software, Roland has done well to negate the need for a computer in many scenarios, which offers the best of both worlds. Chopping and preparing samples is a prime example of this: it’s straightforward to create a whole bank of carefully edited material from raw source material from the sampler itself without a single connection to any computer.

There’s even a Skip Back Sampling function, which essentially keeps a rolling recording of the last 25 seconds of the sampler’s output and allows you to skip back and resample any unique sounds you were making. If, on the other hand, you are of the computing persuasion, you can use the MKII’s software and new app for detailed editing, sample assignment and more. The onboard USB-C allows for driverless compatibility with smartphones and tablets. 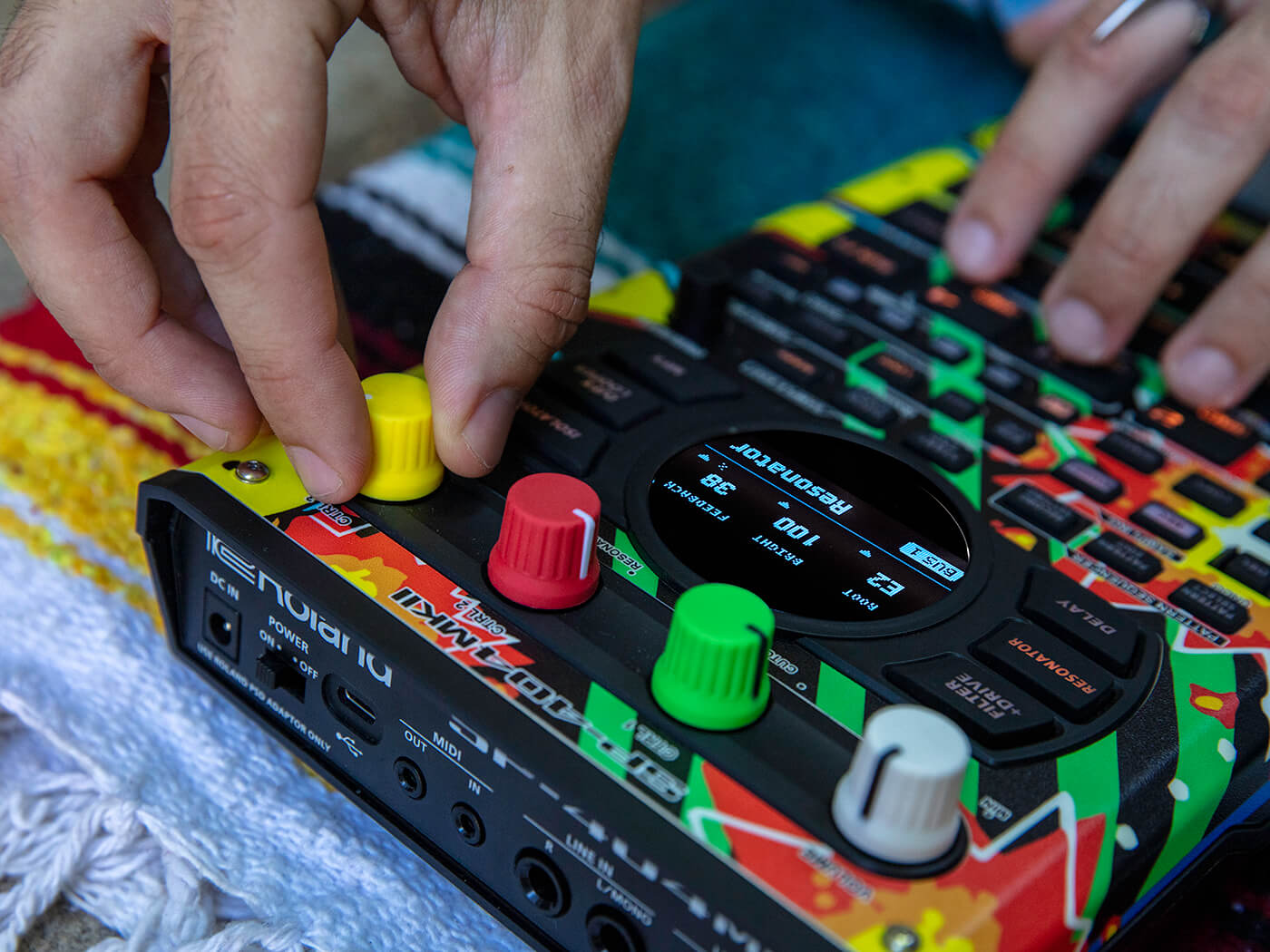 Users of previous SP-404s will likely remember the slightly awkward list of effects written down the chassis itself. This is now gone thanks to the MKII’s OLED screen, which presents a litany of new effect options. The dedicated buttons for delay, filter and drive and isolator remain, but Roland has decided to replace the original SP-404s’ Voice Trans button with a tunable ring-mod-style resonator.

We’re pleased to see an option to assign the five quick-access effect buttons to other effects, especially now that the MKII allows you to bus up to four effects at once. One-button access to custom combinations of effects also makes the sampler more adaptable to different music applications and styles, such as the many genres that don’t require an isolator effect constantly on hand.

We would have liked to see Roland take this idea further by ditching the suggested effects and just label the buttons FX1 and FX2, and so forth. Someone trying to add a cassette simulation to their field recording of birdsong is not going to find it particularly intuitive hitting a button labelled DJFX Looper. Similarly, the three multi-function knobs at the top of the panel simply don’t need their respective Filter, Cutoff, and Drive labels. These represent just one of their myriad functions and are displayed on-screen when active anyway. 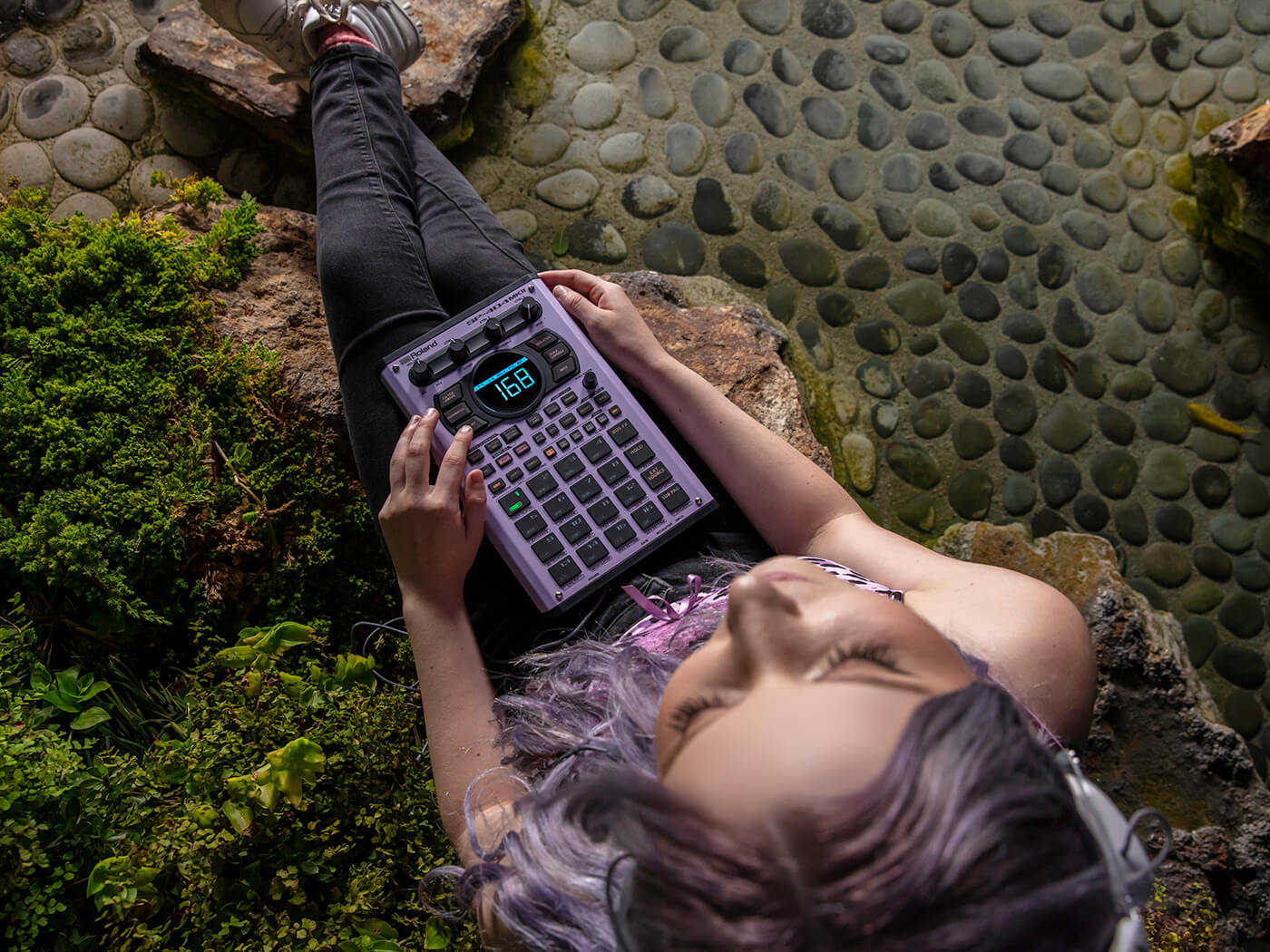 The MKII offers two different effects buses which you can arrange in series or parallel via an editor screen that also presents a further two master effects buses. You can send various samples to one or both buses while others remain dry or affected differently, opening up lots of flexibility in performance.

There’s even the handy option of creating effect group Favourites for easy access to go-to sounds. It took us a short while to come to terms with the routing of the buses, particularly as buses 1 and 2, and buses 3 and 4, don’t share the same adjustability or accessibility. Most of the time, though, two chainable effects are plenty. Overall, the effects section is just what one would hope for: highly functional, sounds brilliant and leaves room for plenty of creative knob-turning.

The SP404 MKII’s pattern sequencer is quick and intuitive. Choose your BPM and pattern length, hit record and hit your pads. An improved variable quantise parameter makes for smarter and more natural dialogue between a sequence’s tighter and looser elements, and a smart Undo function allows you to easily rectify mistakes on the fly.

As you might have come to expect by now, editing patterns after the fact is much easier than on previous models, thanks to the OLED screen and menu encoder. The ‘pattern chain’ function is also useful, allowing you to line up disparate patterns stored anywhere in the MKII to play back successively. 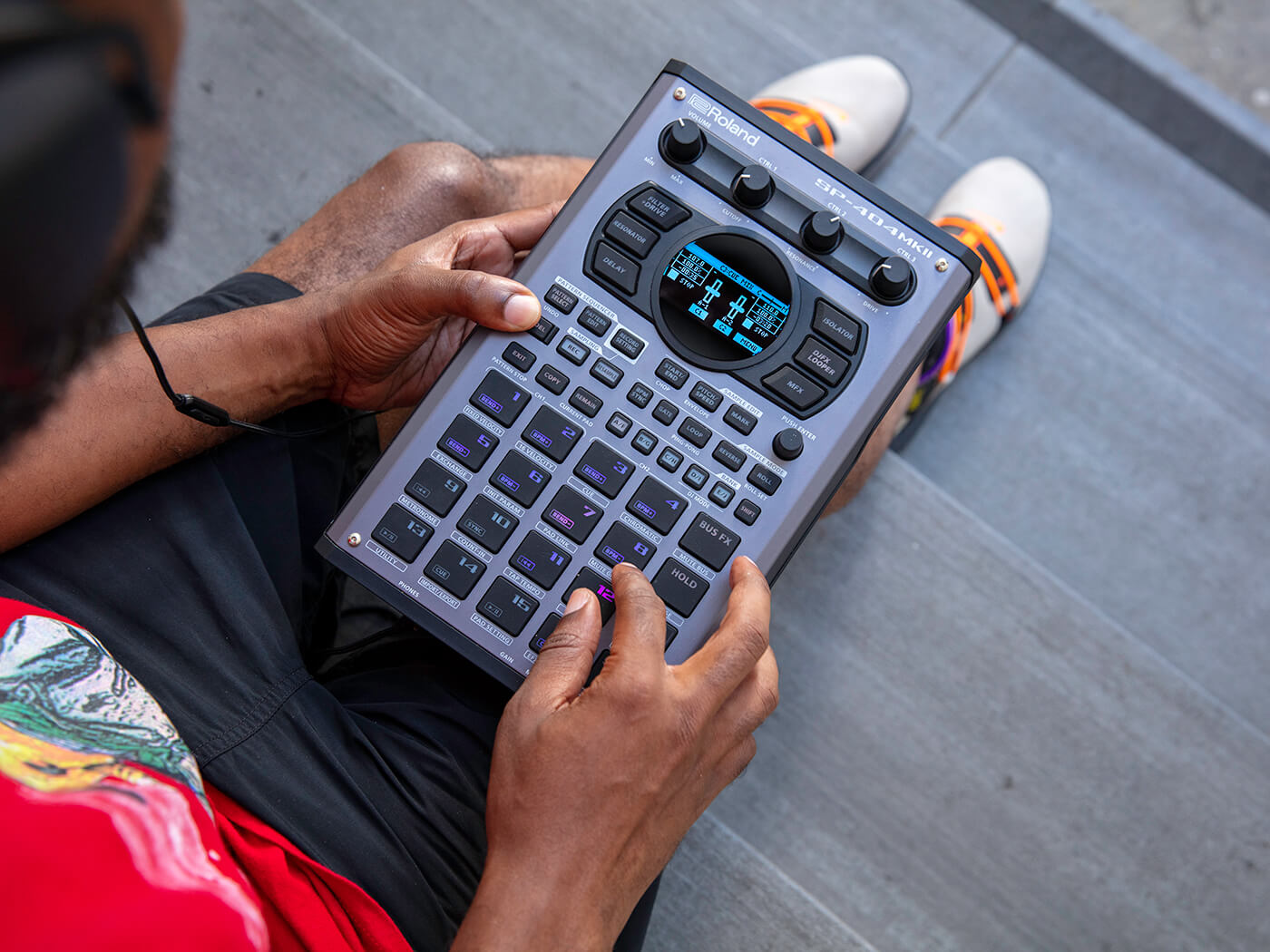 You can access the new DJ Mode by pressing the Bank D and Bank J buttons simultaneously. This turns the knobs at the top of the interface into faders and makes inventive use of the sampler’s colour-lit pads, separating the grid into two halves and assigning each pad with an alternative function to bend, nudge and sync sounds on two different channels.

We found DJ Mode surprisingly intuitive despite it being quite convoluted in theory. DJ Mode is best thought of as completely separate from the rest of the MKII’s functionality, as we struggled to integrate it with the rest of its workflow and playback. Still, we can think of plenty of instances where using it exclusively would be a wholly different, exciting application of the sampler.

The MKII’s workflow, however, does take some getting used to. It’s not always immediately clear which button or knob does what when it comes to menu navigating and parameter adjustment, but we can see this becoming easier with familiarity. This particularly applies to features such as DJ mode and effects buses but, then again, these are perfect examples of things Roland has included seemingly for the sake of sheer flexibility and fun.

Additional bells and whistles can be frustrating when fundamental functions become needlessly complicated or fall short of the mark, but with those things so well taken care of with the MKII, there’s very little to complain about here. Roland has brought its A-game to the SP-404MKII and re-established itself as an undisputed leader in the world of hardware sampling. 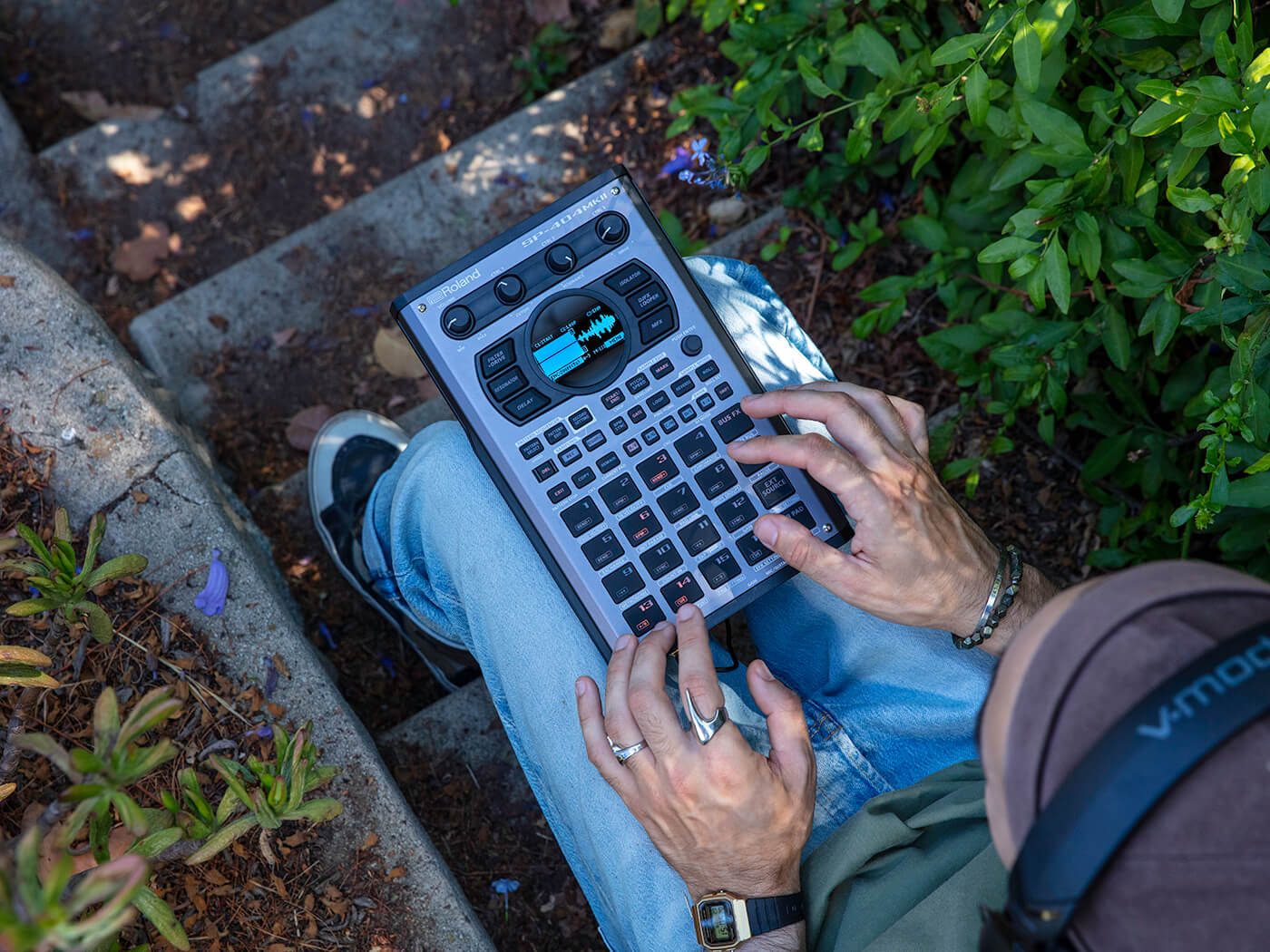