It’s a romp through the Dark Ages with Vikings that only Eduardo Tarilonte could make. We plunder the master sound designer’s latest release. 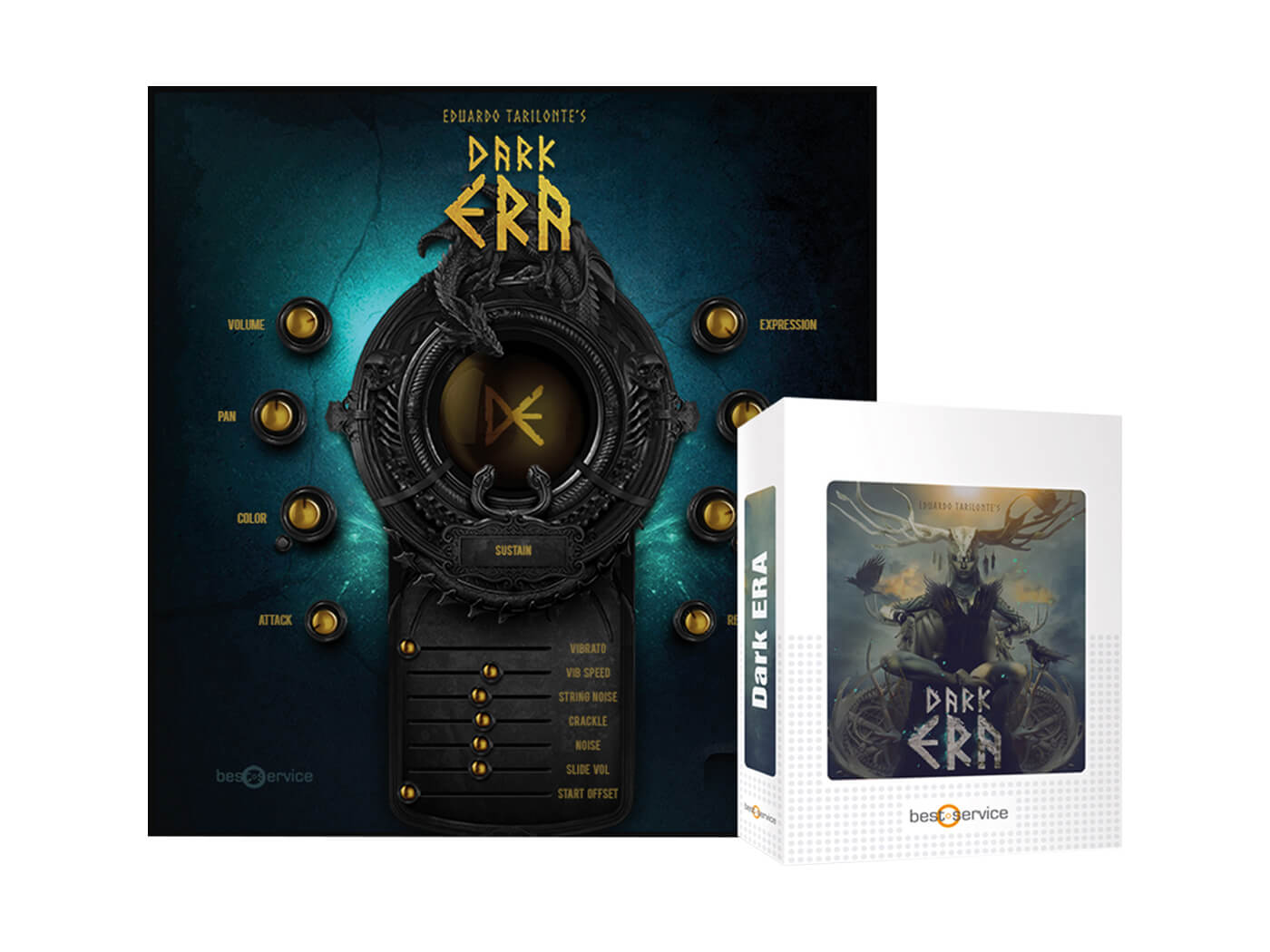 Over the last decade, Eduardo Tarilonte has pretty much defined a completely new category in music technology: that of the historical or fantastical sound library. Whereas the likes of Spitfire Audio, Orchestral Tools and Sonokinetic successfully focus on all things classical, here is a sound designer who plunders history or, when he feels like it, he plunders history that hasn’t really existed. I still cite his Shevannai: The Voices Of Elves (yes, that’s elves, not Elvis) as my Tarilonte eureka moment, an incredible collection of ethereal soundscapes and vocals.

Like me, you may have thought these historical and fantastical libraries have no place in your music, but Tarilonte’s genius is that, while they are aimed at very specific moments in time (or fiction), each beautiful instrument recording or incredibly rich atmosphere can find a home in whatever genre of music you’re working in.

Indeed, they can completely transform whatever you are working on… You need something different to lift a tune? Tarilonte has recorded it for posterity. At the very least, he’s producing a digital catalogue of every real and fantasy instrument ever created (or not created, as it were). At most, he’s producing the ingredients for sonic worlds no one else can touch and tools to inspire your music-making into areas you probably won’t even have dreamed of. I’m leaning towards the latter.

The last Tarilonte collection I reviewed was Celtic Era, a large library focused on ancient instruments including keyed, percussion, soundscapes, strings and winds. I noted that it was perfect to “transport you and your music to everywhere from the plains of Mordor to the lower, third-class decks of the Titanic”. Clever stuff, eh?

Dark Era takes us back to, not surprisingly, the dark ages, where the worlds of history and fantasy overlap – we’re talking Norse mythology, Vikings, pagan music and “forgotten cultures and tribes celebrating and singing their myths”. It’s not surprising, then, that Tarilonte is most excited about this collection, as it crosses both of his real and imaginary worlds.

You’ll need to download five data .rar files (mostly 2GB each), plus the latest version of the Best Service player (free), which is like Kontakt, a shell in which you load the data files to make up the Dark Era instruments. Unpacking the .rar files will probably involve downloading a special unpacker (for Mac, I used the freeware Keka tool) which unloads the data to a single Dark Era folder, a shade over 15GB in size (then you delete the original .rar files). 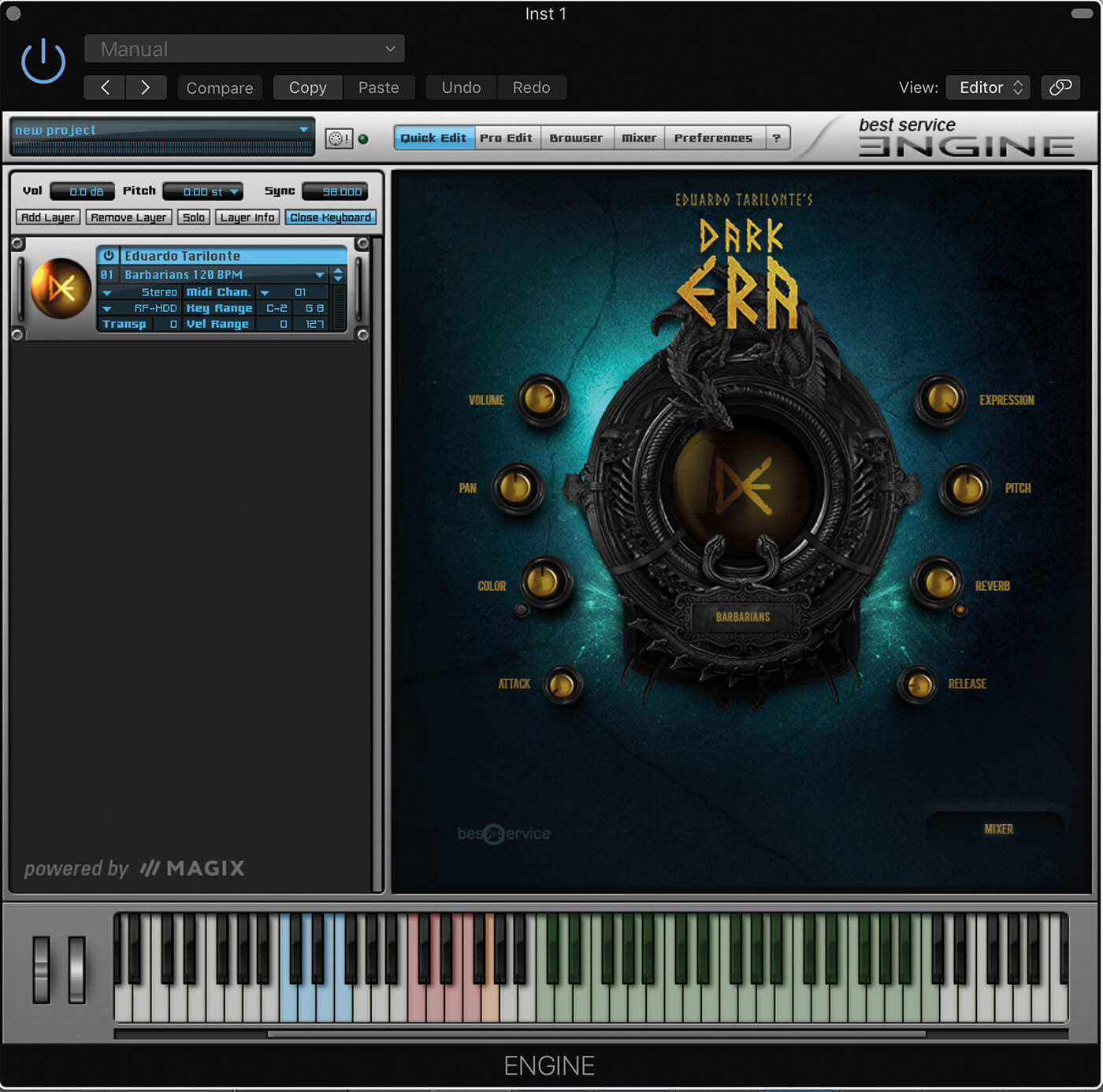 You then need to load Dark Era into the Best Service engine (easy), load an instrument to trigger the E-Licence software which generates a product code for you to input at your Best Service login area. From this, you get a response code which you paste in to activate Dark Era and you’re sorted. Yes, it is a bit of a faff, but not as bad as some installations.

The Best Service Engine works standalone or within your DAW like a plug-in instrument and I tested both without any issues. You get three main sections in Dark Era’s library: Instruments, Sound Design and Voices. Instruments is broken down into Percussion, Strings and Wind. Starting with Percussion, you get everything from Anvil to Viking Mouth Harp – three words I never thought I’d type together.

The presets can be as simple as half-a-dozen samples across notes, or different variations spread over different key ranges. All are beautifully recorded and there are extra controls on screen to adjust Envelope, Reverb, Pitch and other parameters. Some sounds might be a little short and to-the-point for you, but the better ones, such as the Skin Snares and Square Frame Drums, have phrases on green keys to get you inspired.

Others, such as Tympanum Romano Tuned, have brown keys with variations or different lengths of the same tuned note – meticulous stuff and typical of Tarilonte’s attention to detail.

In the Strings section, the Bowed Strings are a definite plus, especially where the aforementioned brown, blue and now orange keys offer variations and phrases. These are where the collection really starts hotting up. This is maintained in the Plucked Strings folder, where three different types of Lyre and a Lute give you all of that Nordic tavern vibe you didn’t think you wanted but, after hearing it, will become an essential inclusion on your next deep-house tune.

Finally, in the Instruments section, the Winds folder offers some of the best flutes, horns and pipes ever to grace a piece of software and, although I don’t recall too many Vikings playing didgeridoo in my history lessons, they probably would have done, had they sounded this good.

Back to the three main folders and we enter Sound Design, and this is where Eduardo lets his hair down. The Epic Loops are just that: instant trailer soundtracks with menacing melodic loops backed by huge percussive rolls. You’ll linger here and create your own tense battle scores – of that I have no doubt.

The Rhythmic Loops are a real surprise, demonstrating an almost electronic fervour, and while the variation between types is perhaps not that pronounced, they’re all inspiring starting points. I found myself drawn to underpinning each with arpeggiated synths. But that’s what I meant earlier about the way Eduardo constructs these libraries; these sounds might be aimed at the Dark Ages, but they’ll fit any genre.

Tarilonte’s Soundscapes folder exists in pretty much all of his collections, and is a personal favourite. It’s basically where he throws everything at a preset to come up with some of the most incredible pads and atmospheres you could wish for. My only criticism has been that there are usually too few, but in Dark Era, there are loads. They can be variations on wind atmosphere from caves or whispering voices that build. If you get a chance, try Dark Winds III, a stunningly atmospheric backdrop to any genre. In fact, the whole folder is stuffed full of atmosphere – if Bethesda doesn’t make use of it in the next Elder Scrolls game, then it’ll be missing a fantastical trick.

Finally, we have the main Voices folder. In Cantus, Altus and Mystica, three previous collections that I reviewed, Tarilonte demonstrated a huge flair for capturing ageless vocals – and there was a huge variety of them, from Gregorian chanting to witch-like atmosphere. Here, we’re talking the same recording quality, but more chants, effects, growling and throat effects, rather than the melodic phrases found in previous libraries. It’s a shame, although the Vikings weren’t perhaps renowned for their sing-songs as they cruised into battle.

With so many companies covering the soundtracking world, it seems that we need Tarilonte to shine a beacon for the more obscure, but no less usable soundcapes. In Dark Era, he has found yet another niche to plunder and come up with sounds that needn’t be used just within that specific area.

The instruments, the recordings, the research and the attention to detail will have you scratching your head in wonder, but the loops, the atmospheres and that Soundscapes folder will have you reaching for your keyboard with many an inspired thought. Dark Era is another astonishing journey – 15GB of some of the best recordings you will ever hear. It might not be an Era you thought you’d need, but is one you will surely grow to love.

If you’ve read the rest of this review, you’ll understand that, like the rest of Eduardo’s collections, this is about capturing specific sounds, instruments and phrases beautifully. You might not absolutely need these, but when you hear what can be done with them, in the Soundscapes, Loops and Pads folder, then you will be inspired to greater heights, no matter what music you make. Simple as that. 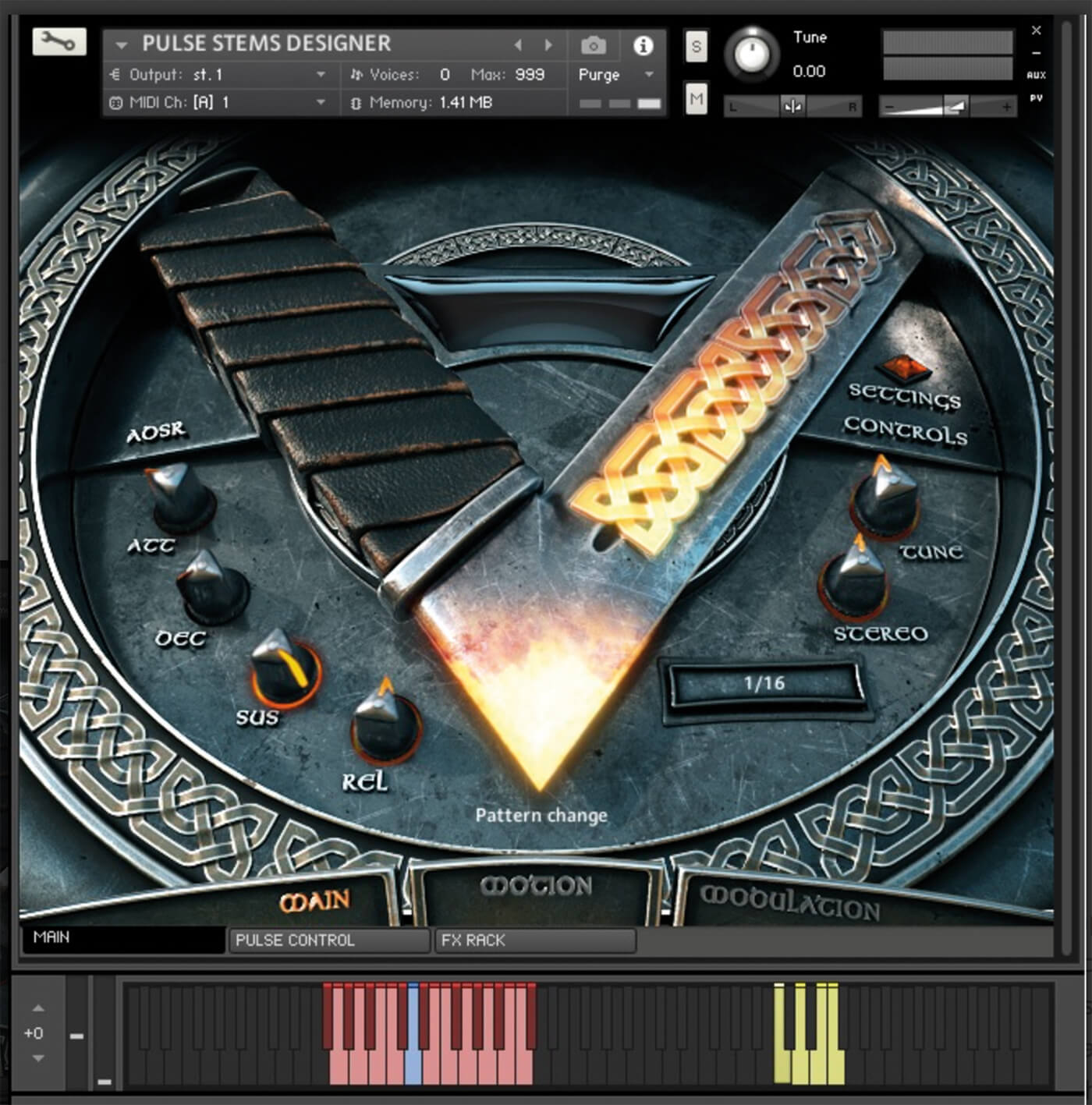 Not expecting anyone else to have thought of delivering Viking sounds, I typed ‘viking sample CD’ into Google only for this to be the top hit. There are more instruments than atmospheres, but it is a complete library tool. 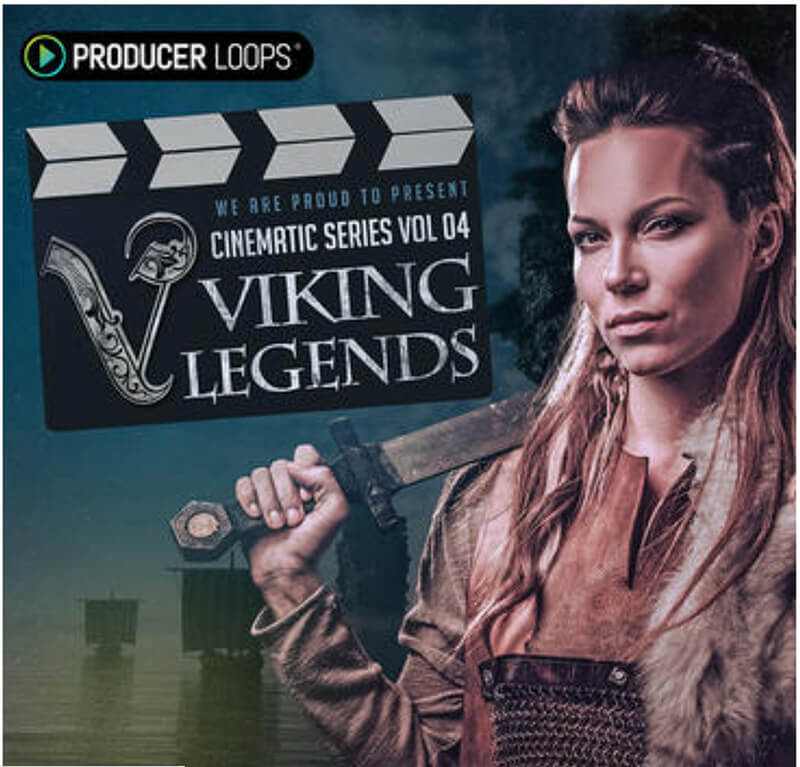 Blame Game Of Thrones, but here’s another one. This is a straightforward sample collection rather than instrument, but claims to be ‘capable of summoning the Norse gods themselves’. Of course it does.