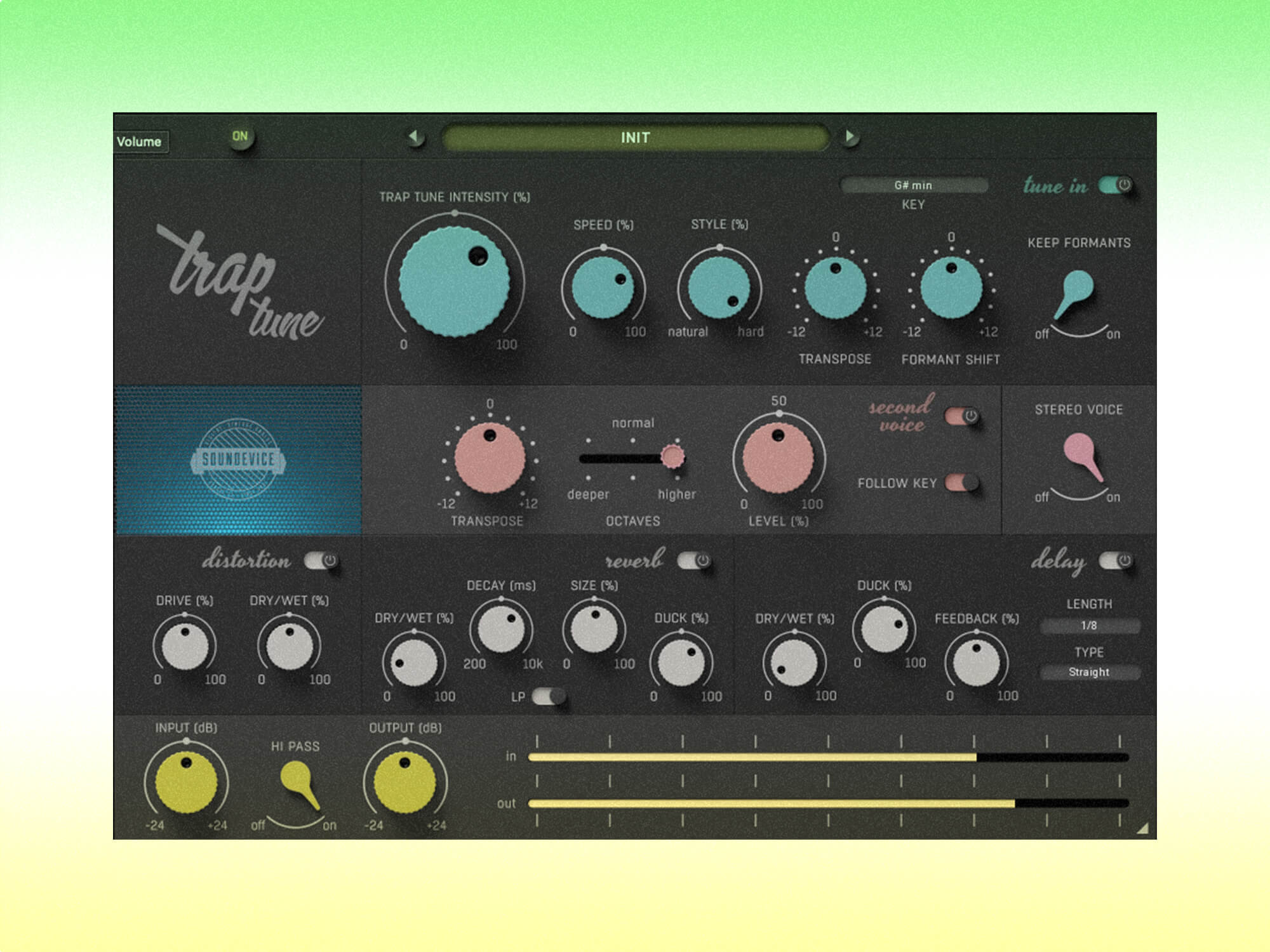 Vocals are often the focal point of a track, so it’s important to get them to sound impeccable. We’ve seen various vocal channel strips over the years, with fine-tuned controls and presets for getting pro-sounding results quickly. United Plugins‘ TrapTune features natural tuning, hard tuning and several other vocal effects in a single plug-in, making it especially suited to genres that favour the hard-tuned sound such as hip hop, trap, RnB and contemporary pop. Some features could benefit from some refinement but it’s a surprisingly versatile processor that provides characterful results quickly.

The main section is the Tune In module. You have controls for intensity, speed and style (from natural to hard), plus a drop-down that lets you select the key. As with any processor of this nature, you need to experiment a bit to get the best results, and although it won’t be replacing our better quality vocal tuning plug-ins, it’s effective for dialling in the hard pop tuning sound. We found the Natural Style setting less effective though. Elsewhere in this section, you get controls for transposing the entire vocal and affecting the formant plus or minus 12, plus a switch to automatically keep the formants intact as you transpose. The pitch shift here has a slightly grainy quality, but this results in the formant sounding a little less nasal than some other alternatives, which may help it sit better in the mix. It would be useful if there was a numeric value for the transpose though, as it’s hard to see exactly what pitch you have set.

On top of this, you can switch on and layer a second voice, which can be set to unison, or an octave up or down. You can then fine-tune the semitones to create harmonies, and there’s a volume control to blend it in with the original vocal. It’s a simple effect, but a quick way to add some extra depth to any vocal. There was an update since the initial release that lets this follow the key set in the Tune In module, which helps make it more useful. To the right is a Stereo Voice switch, which sounds massive, and adds an instant, super wide effect. Unfortunately, it’s at the expense of phase cohesion, and it destroys the signal when you fold to mono, so use it with caution or consider using it on a duplicated track.

Further down is the effects section, which includes distortion, reverb and delay. Despite the limited controls, these can be called upon to make quite dramatic changes to your track. The distortion has a single Drive dial and a dry/wet control, but it also rolls off the tops and gives a broad bump around 2k, which makes it great for characterful, lo-fi sounds.

Next up is the plate reverb, which has Dry/Wet, Decay, Size and Duck dials. Given these limited controls, it’s a pleasant surprise how many different sounds can be dialled in, and it sounds smooth and works well as a vocal reverb. There’s also a low-pass filter switch that can be used to give a darker sound. Alongside this, there’s a simple modelled tape delay with various tempo synced timings, Dry/Wet, Feedback and Duck controls that do an effective job at adding some depth. Finally, there are input and output controls and meters at the bottom, plus a Hi Pass switch that rolls off below 100Hz.

Despite a few misgivings, TrapTune is an intuitive and versatile vocal FX strip that can quickly make your vocals sound more exciting and radio-ready. It won’t replace the need to do EQ and compression work, or will it potentially replace other pitch and effects plug-ins in your toolbox, but it’s a good choice if you’re looking for something quick and creative. It’s especially good for things like more characterful backing vocals where you can let rip with the pitch, distortion and reverb effects.