iZotope’s mastering suite is back with new modules and a more comprehensive AI assistant but it’s not yet time to let the machines do all of the work. 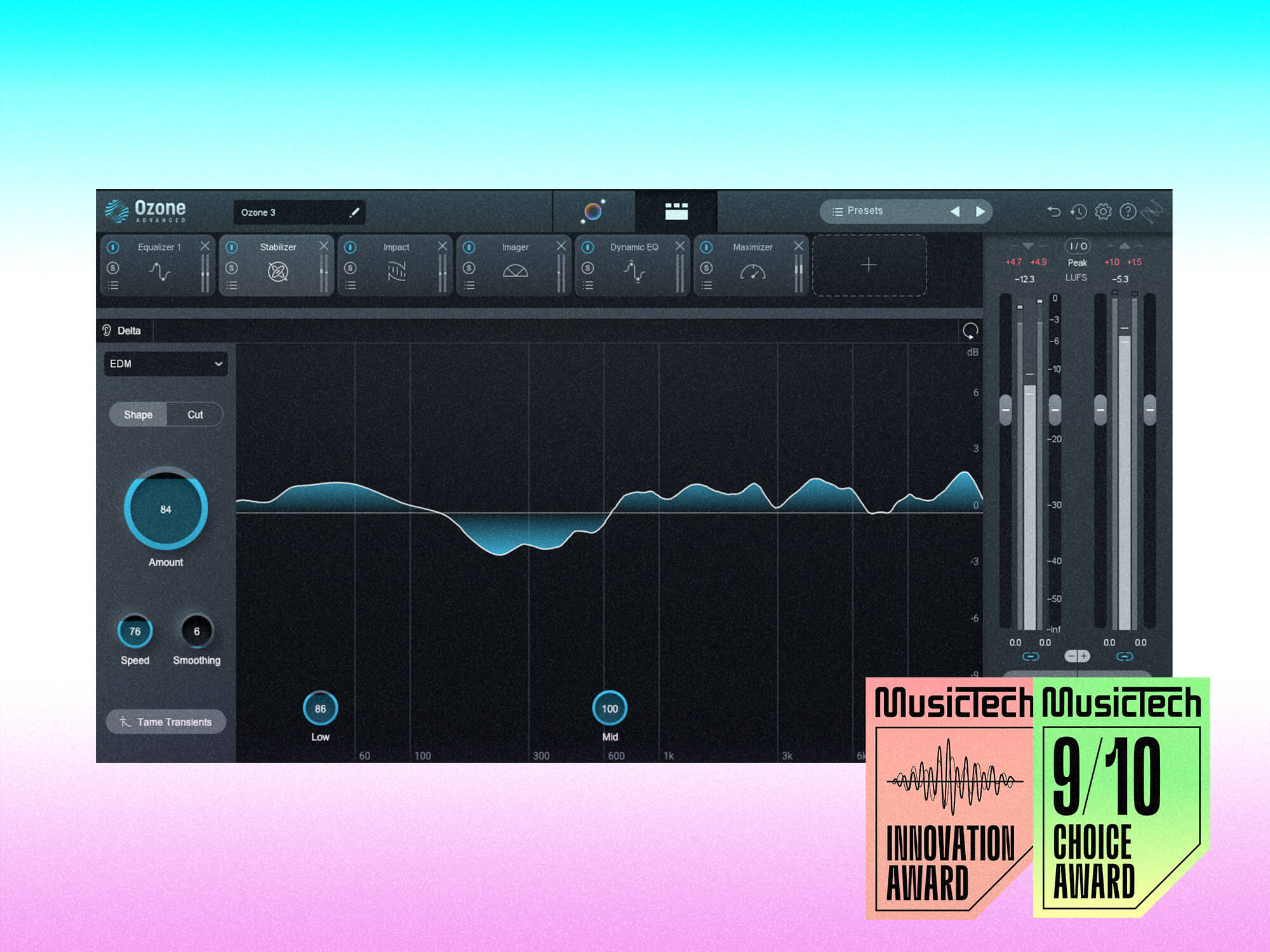 With two new cutting-edge modules, upgrades to several others, and a completely re-designed AI Master Assistant, Ozone 10 is a tremendous update to iZotope’s mastering software. Despite the odd AI hiccup, this new version is a powerhouse of modern processing tools and refined workflow that gives you more control over your audio than ever before.

There’s plenty to get through so we’re focusing on the new details in this review. But if you want a refresher, you can read our reviews of Ozone 8 and Ozone 9.

Ozone 10 comes in Standard and Advanced versions. You get the mothership plugin that can load all 17 modules, plus separate component plugins for each. Interestingly, iZotope has chosen not to include a standalone version for this release. Suffice to say, it’s a weighty package, with a broad array of EQs, dynamics processors, exciters, vintage modules and several clever DSP tools. The layout isn’t drastically different, but there are a few cute tweaks such as more curved edges, and several controls being replaced with graphical dials. Let’s cut to the chase and check out the new features.

First, we have the Stabilizer module. This shares some similarities with Neutron’s Sculptor, but is fine-tuned for working on masters. A Shape mode will gently massage your audio in real-time to smooth the spectral spread and bring it closer to a target curve, and you can use Cut mode to gently notch out unwanted resonances. In a nutshell, the Shape mode is like a slightly less transparent Soundtheory Gullfoss, and the Cut mode is similar to Oeksound Soothe 2, albeit with broader strokes.

For the spectral profile, you can choose from 10 genre presets, plus an All-Purpose preset. It seems like a missed opportunity not to allow user import here though. It’s also a shame you can’t use both modes to smooth your spread and tame resonance at the same time, although you can add an extra instance of the individual plugin. There are additional controls for the Amount, Speed, Smoothing and Sensitivity, plus separate amounts for the Low, Mid and High, which lets you hone in on processing different parts of the spectrum. There’s also a Tame Transients button that will shave off the aggressive front end of any hits, although it would have been more flexible if this was a slider rather than just ‘on’ or ‘off’.

Another major new module is Impact, and it sounds similar to the Punch mode that was recently added to iZotope Neutron’s compressor module. It’s essentially four one-knob compressors spread across the spectrum, which have been refined for working with mastering and controlling micro-dynamics. You get four sliders that can be raised to increase the punch and dynamic range of each band, or lowered to reduce and glue it. In place of attack and release times, you get an overall envelope slider that can be set to milliseconds or cleverly synced to timing divisions. This can give effective, emphasised pump when set to 16th notes on an upbeat track. There are also useful auto-gain, Band Link and Stereo Link functions, plus a gain trace meter in the middle that shows all four bands as different colours.

Impact is a unique processor that allows you to get inside the track and quickly manipulate the dynamic range of different frequency spreads. So, you cangive the kick more space to punch through while compressing down some overly loud hi-hats. Obviously, these things are best done in the mixing process, but if you’ve only got a stereo master to work with then Impact could be an invaluable tool.

Both the Stabilizer and Impact modules have Delta buttons that allow you to listen to the difference between the input and output, which is especially useful for hearing exactly what’s happening.

Another new feature is the Soft Clip. This adds a high-fidelity loudness boost to the Maximizer module, with 4x oversampling to prevent aliasing distortion. It’s placed ahead of the mastering limite and can be used to round off transient peaks and add a touch of saturation, which will make the track sound louder and also means the limiter isn’t having to work as hard to suppress the transients. There are Light, Moderate and Heavy buttons that begins saturation at 3dB, 9dB or 30dB below the Limiter threshold, respectively, plus a wet/dry control to blend in the processed signal. It’s a welcome addition to the Maximizer that not only helps you get more volume when pushing the Limiter, but also adds an extra flavour of saturation.

The Imager module has also had a little spruce, with several controls moved around and a new Recover Sides function added. Normally when you narrow a signal, you lose the stereo information and will only be listening to the centre. But with Recover Sides, it’s scrunching all the information into the centre space so it sounds the same in mono. It’s not necessarily a function that you would use that often, but if you’re working on a mix that’s too wide and needs narrowing down, then you can confidently use this tool in the knowledge that you aren’t losing any information.

Finally, we have the vastly improved AI Mastering Assistant. Using the Assistant on previous versions of Ozone would set a static EQ, basic dynamics if needed, a dynamic EQ to reduce problematic frequencies going into the limiter, and the Maximizer settings.

In Ozone 10, the Assistant adds the Stabilizer, Impact and Imager modules to make changes to tone, width and dynamics, making it feel like a much more comprehensive adjustment to the unmastered audio. In place of the previous pre-analysis menu, you now simply press a button while listening to the loudest part of the track and the AI will do the rest, choosing from the 10 genre categories and then building a bespoke channel strip. For these targets, iZotope has taken an average of the top 10 hits in each genre and, for the cinematic setting, the top 10 box-office hits. We found it was fairly hit and miss at selecting the right genre, but you can easily switch between the settings once the initial analysis has been done.

Although it’s a promising start, it feels like the genre list could be much more substantial. After all, the mix requirements of a deep house track will be vastly different to drum and bass, but both unfortunately fall under the setting for EDM. Thankfully, you can load in your own reference tracks to use as targets, which is where the Assistant really comes into its own. Obviously, your choice of the right reference track is absolutely critical for the success of the outcome but it’s quite remarkable to hear your track with the matched tone, width and dynamics of a reference. Even if it’s not the perfect result, it gives you plenty of information to take back into the mix (assuming you’re mastering your own tracks).

Where previous versions of Ozone were a little safe in their Assistant results, iZotope has let the shackles off in version 10. EQ moves are bolder and Maximizer settings can be louder. It’s your responsibility to truly use your ears and make further tweaks to get the best results.

On some tracks, we find the Maximizer teeters close to distortion, so ideally you need to be able to hear the results of over-processing to make sure you still get a polished master. To make things easier for newcomers, you get an Assistant View that features global macro controls for the EQ, Stabilizer, Width match, and Dynamics Match (with controls for both Impact and Maximizer). This lets you make quick adjustments along with a gain-matched bypass, before delving into editing individual modules should you see fit.

Overall, we’re very impressed with the ease and quality of the results of Ozone 10. With the new modules, masters sound more balanced and more spacious, both in dynamic range and width than before. Ozone has grown into a phenomenal suite of cutting-edge processors, and it somehow manages to offer levels of control that are both understandable to novices but with enough nuance to make it a worthy tool for the pros.