This updated vintage tape delay plug-in pushes even further beyond the capabilities of its IRL forebears to produce a comprehensive time-warping effects engine. 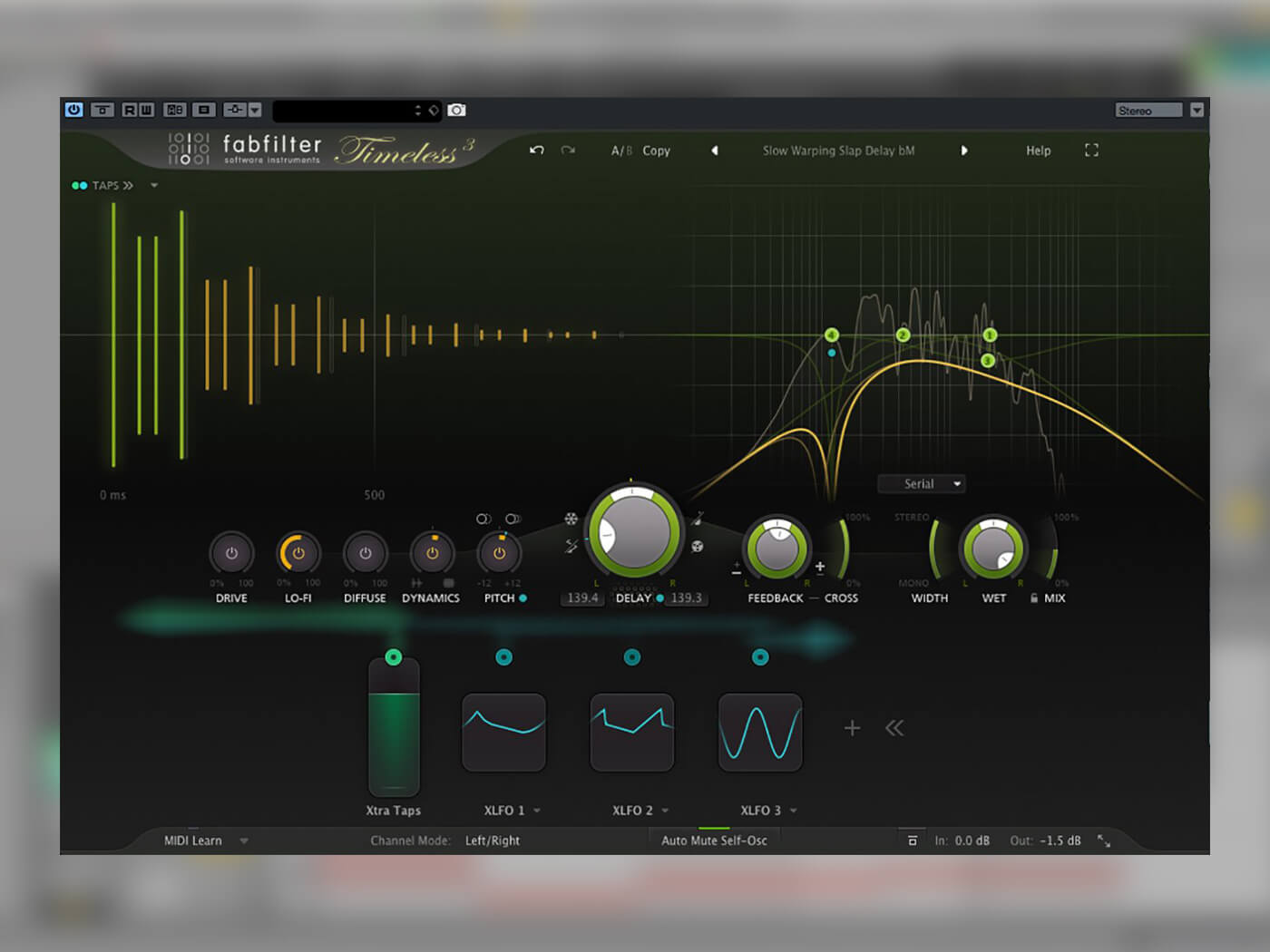 FabFilter has successfully blended sonic quality with a comprehensive set of delay and modulation tools, all within an easy to use and peruse interface. Truly awesome.

Timeless 3 is billed as a vintage tape delay, but this categorisation is more a jumping-off point than raison d’etre.

While it challenges the best analogue delay emulations, Timeless 3 also packs in parameters and modulations that allow careful sculpting and deep, often wild excursions from the original sound.

The redesigned Timeless 3 interface presents a lot of information, but it’s so clearly laid out that coaxing pleasing tape echo sounds is immediate and intuitive. The upper portion displays the delay taps to the left and the feedback filtering to the right, both of which are as animated as they are editable. The lower portion of the UI splits vertically, with the upper half housing the controls, such as delay time, feedback, effects and mixing, while the lower half is devoted to modulation. Dark and spacious, Timeless 3 is gentle on the eyes, which is vital as it can easily grab your attention for long periods of experimentation.

There are plenty of visual aids to link what you see to what you’re hearing, such as pulsating delay tap lines, the filter section spectrograph, and any filter modulations. The modulators, once connected to their control destinations, create a glowing, hazy colour-coded trail. These are a subtle guide rather than hard data presentation. Still, considering the detail available within the modulation parameter edit boxes that you can summon over any control, this is a good UI design choice. 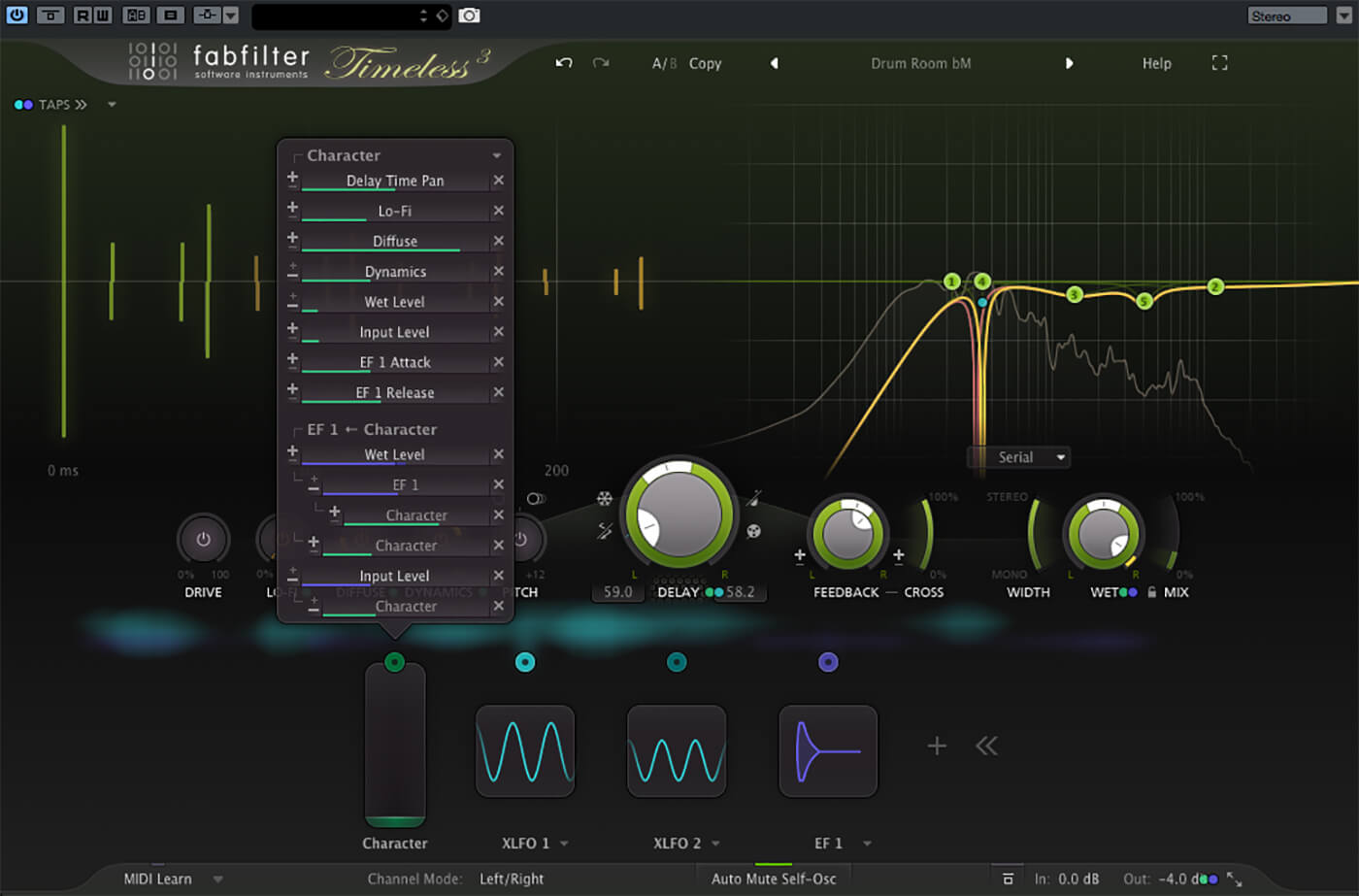 Heart of the delay

The three main controls, Delay, Feedback and Wet, come in dual-concentric rotary form with the centre setting offset, percentage and level, respectively, while the outer rings adjust panning balance. As you alter these parameters, the displayed delay tap lines change position and length to reflect the effect of the changes. This visual guide is far more intuitive than the numerical data shown at the knobs. Once modulation is involved, these lines provide an invaluable representation of how Timeless 3 is working.

Clustered around the central Delay knob are four icons that access delay freeze, ping-pong, tempo sync and Read Mode. The last of these toggles between a tape-style pitch change as the delay time changes and the digital stretch mode where pitch remains constant. Similarly, the Feedback and Wet controls are flanked by related parameters, with cross mix and L/R channel phase inverters for the former and stereo width and mix for the latter. Like the controls they are nested with, nearly all these parameters are possible destinations for the modulators below. 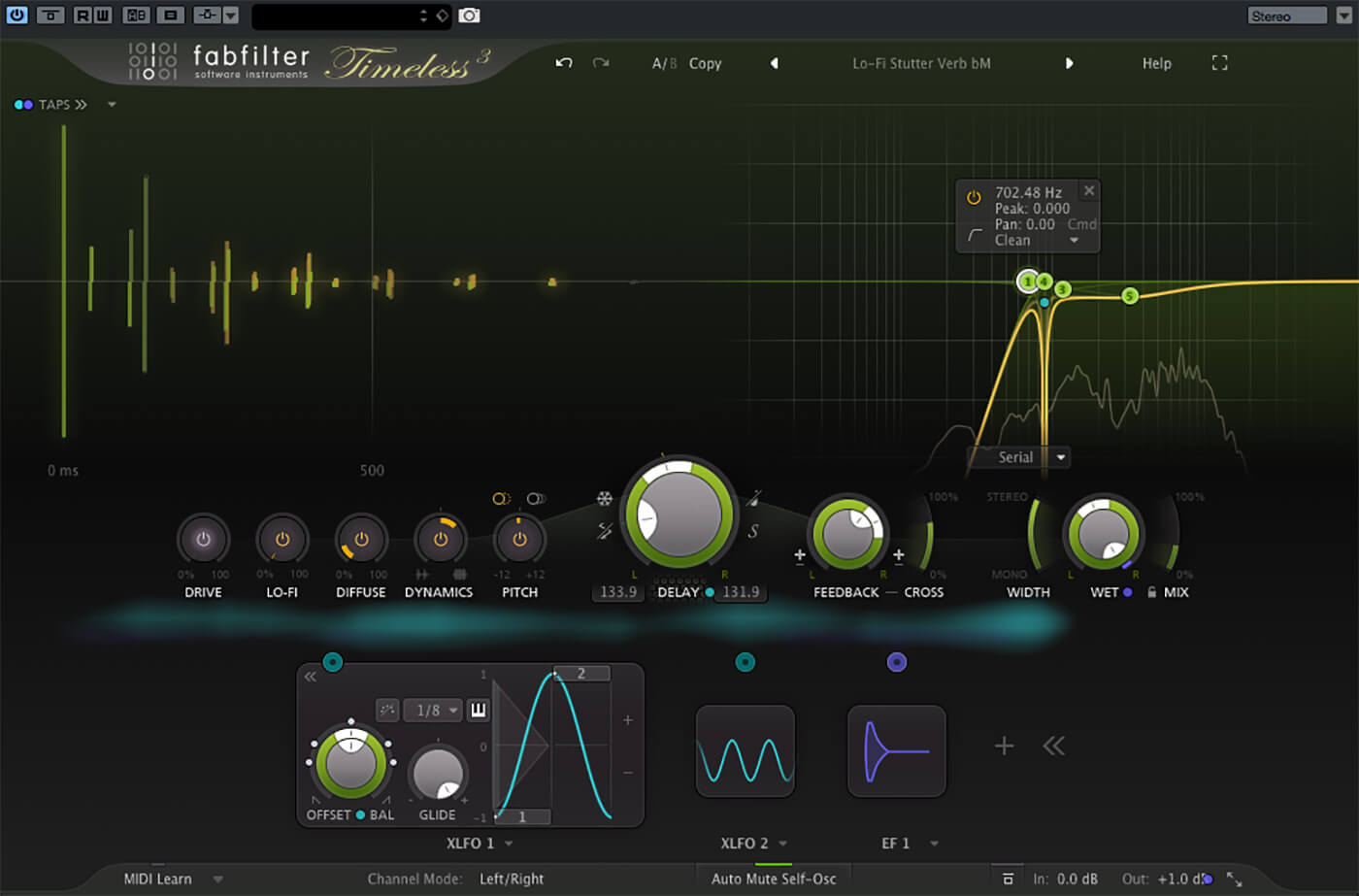 Part of the appeal of Timeless 3 is the playability afforded by the tap and filter grids, and with the full-screen mode engaged, there is no need to squint as you sculpt and tweak the delays. There are two tap display modes: the default shows the two delay lines (left/right or mid/side) over multiple repeats, and a second allows tap editing within the time division, be it tempo sync or milliseconds. You can also place taps, set levels and pan to your heart’s content, but if that’s all a bit hands-on, there is also a menu of tap patterns, factory and user. Back in default mode, you can drag the tap bars horizontally to adjust delay offset (50% to 200%) and vertically to alter feedback. There is plenty of scope for creative manual effects in the tape-style pitch mode, ripe for capture as DAW automation. 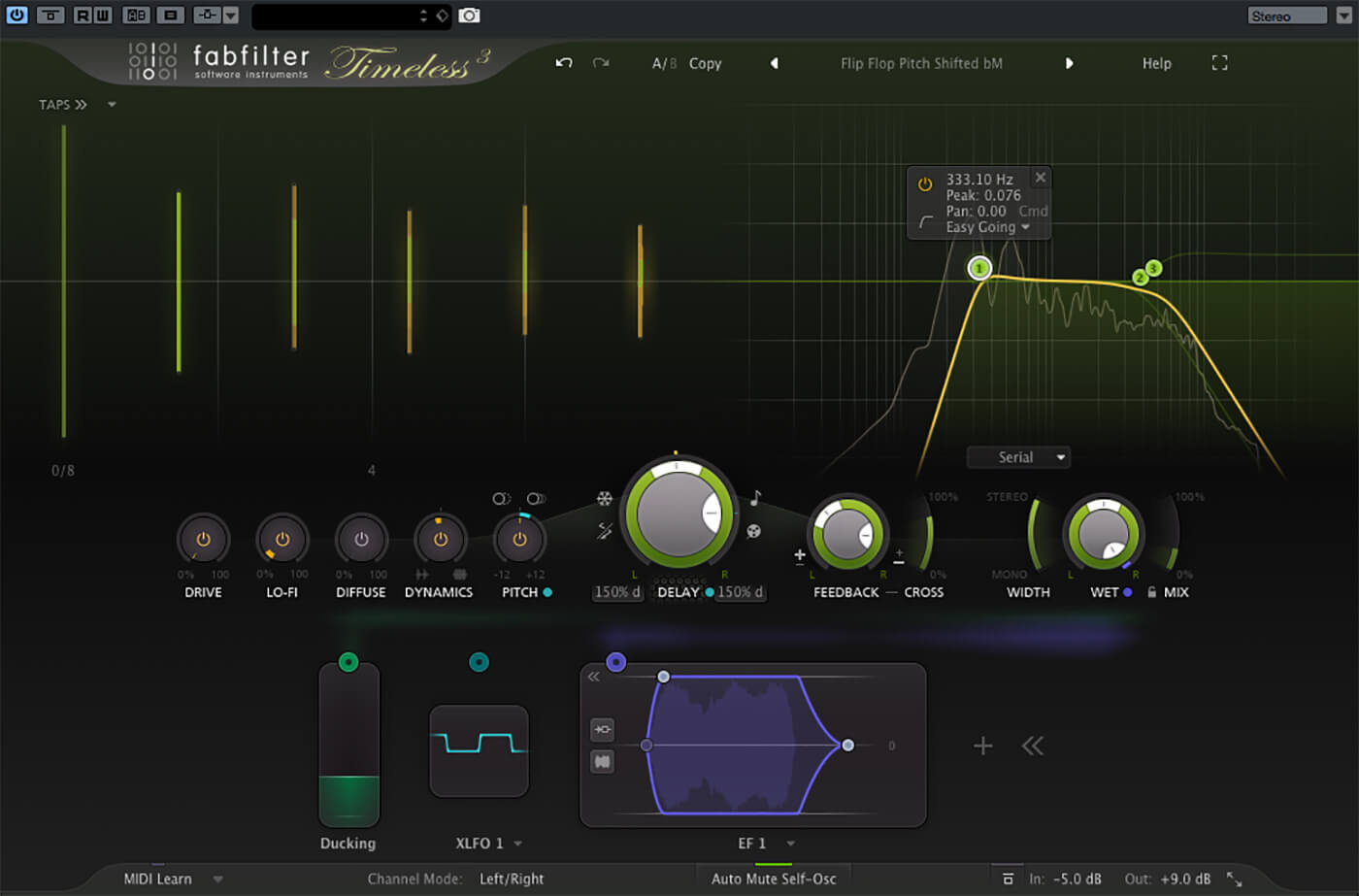 Moving to the right, the overlaid filter curve(s) and spectrograph provide both exacting tone shaping and a source of playable feedback manipulation. As with the taps, you’re free to get as deep as you want, but there’s no necessity because there are plenty of quality presets. There is little you can’t do with the six available filter points, each of which can render all major EQ shapes with bandwidth, resonance behaviour and pan position parameters.

As with the modulators, the filter section warrants browsing the manual to grasp what’s possible. The excellent preset menu can also help you get a feel for the filters. In combination with modulated delay times, this section is where the vintage tape characteristics can be summoned, with excellent results a breeze to achieve. Still, of course, the available power allows creativity far beyond mimicking old echo machines. 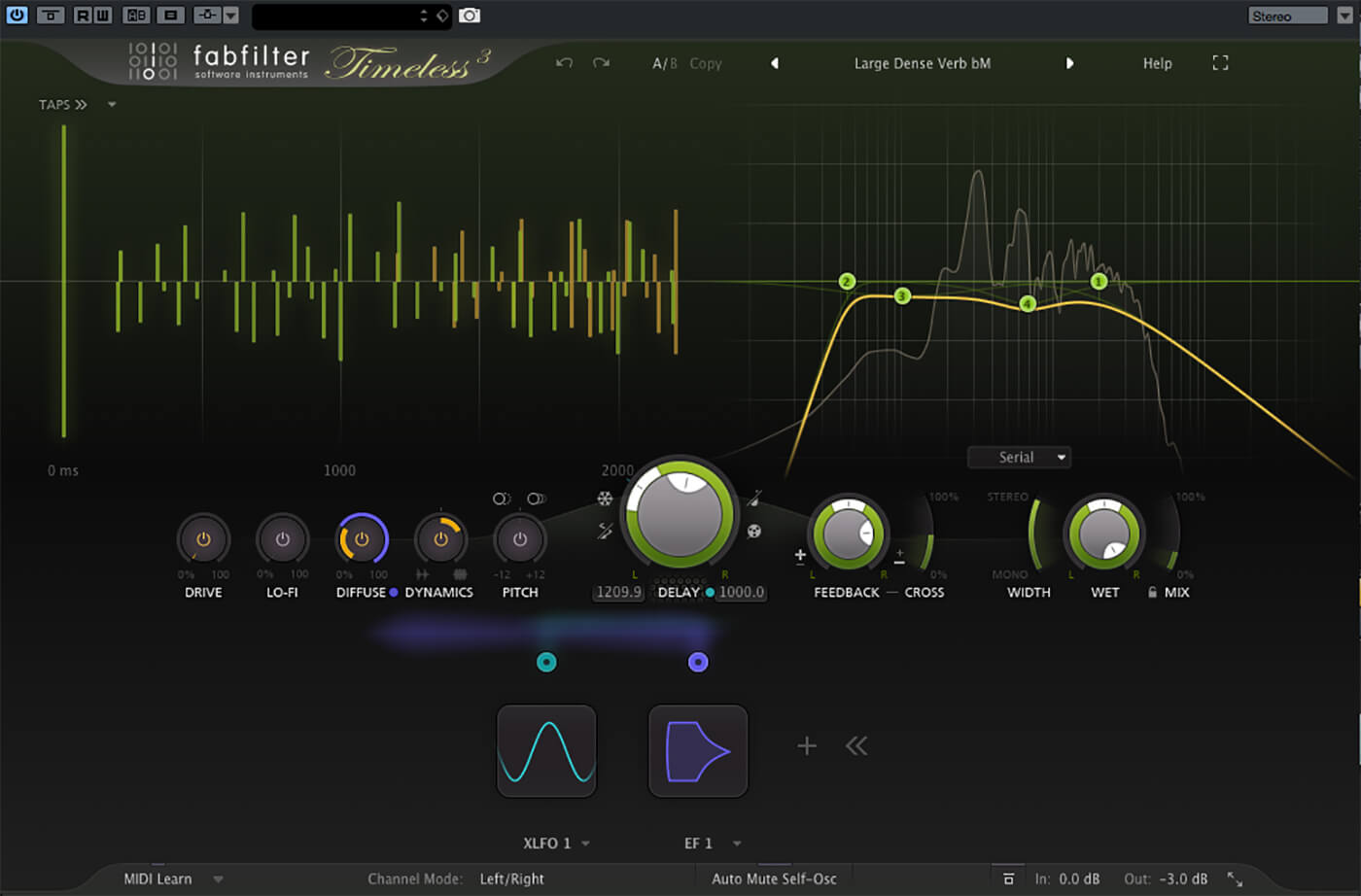 There is nothing you can’t do with the modulation section of Timeless 3. You can set up as many as 50 modulators, if that’s your bag. Modulation sources include LFO, slider and XY controls, envelope follower, envelope generator and MIDI. These can be manually wired to their destination(s) and their effect range set. They can also modulate each other or, in the case of the slider and XY controls, act as overall manual controls for various effects, e.g. the amount of ducking the wet signal receives in relation to the input, which is a regular across presets. Subtle tape wow and flutter can be teased out as easily as dramatic glitches and stutters, further decoupling Timeless 3 from its vintage delay subtitle.

There is so much range within a few clicks it could seem overwhelming, but the interface keeps things tidy, leaving the presets and manual to ease you into familiarity. The undo/redo and A/B comparison options can also help prevent things from getting out of control. The only downside is that there is so much fun to be had that self-discipline is often necessary to stay focussed. 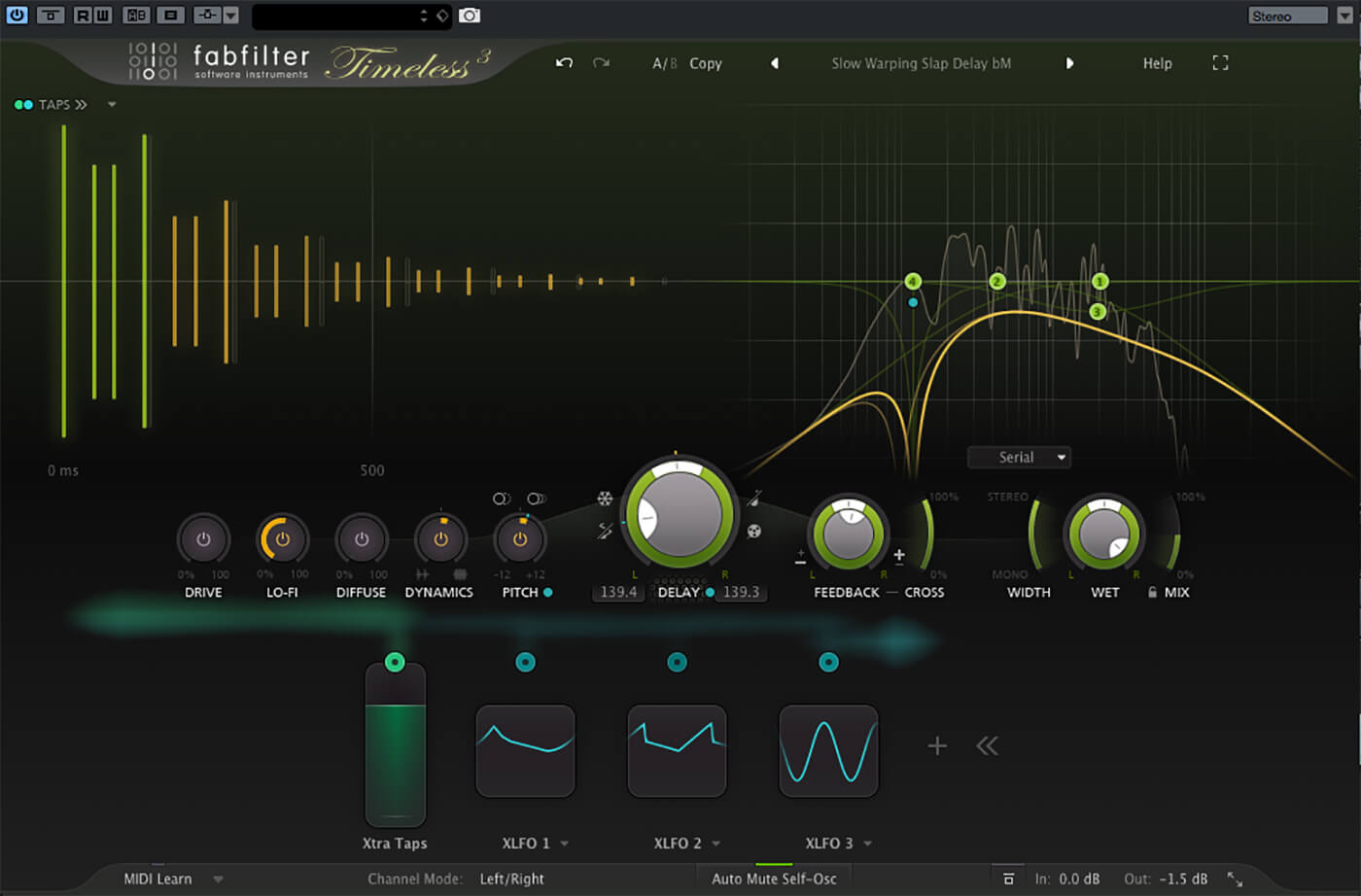 Though Timeless 3 is fully capable of creating lush (or wonky) vintage style tape echo, it can also produce everything from clean digital delays to warped modulations and feedback trash. This is also helped by five new effects, which can all also be modulated. Affecting the feedback signal path are two distinct distortions, Drive and Lo-Fi. Reverb-esque washes are on offer via Diffuse and an octave shift each way with Pitch. The Dynamics effect can compress or gate the input signal, and though only a single knob, it works well without the need to alter the dry signal. Timeless 3 has excellent sonics without these effects, but with just a dash here and there, they can give the sound that extra push, as well as radically mangling it when needed.

If this were the only delay plug-in available, I would not complain; it has it all without drowning the user in attention hogging options. Sure, it has huge potential for complexity, but it can also be deployed quickly and effectively without eating into production time. This is a well-refined, elegantly presented delay that lives up to its name and comes at a very respectable price. 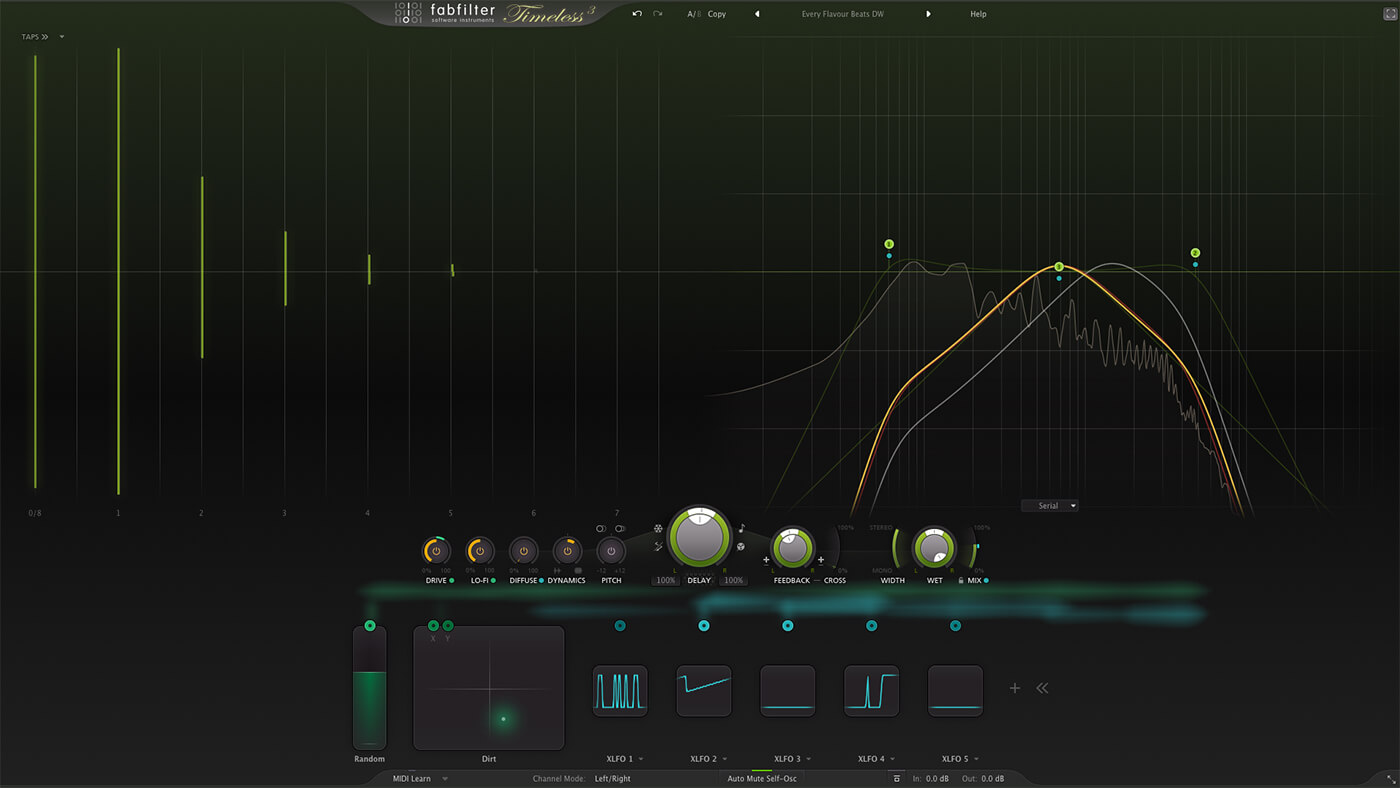