If you had the chance to work on one of the best consoles ever, wouldn’t you take it? 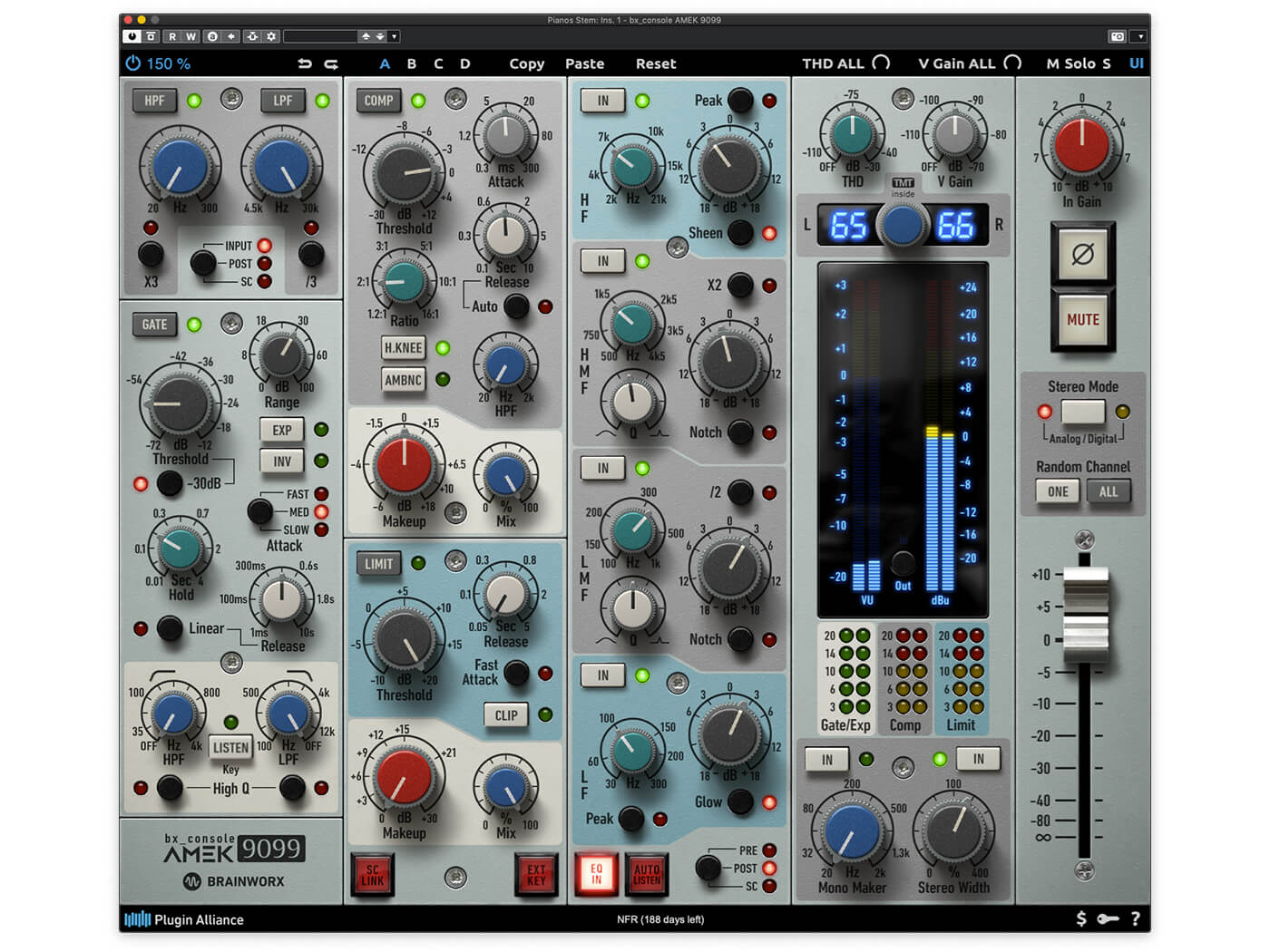 The latest TMT-enabled channel strip is a near-perfect recreation of a peerless, Neve-designed analogue console. It will breathe life and character into your mixes and still has the modern functions we’ve come to expect.

Amek Systems and Controls Ltd. aren’t the most widely known of pro-audio electronics companies, but for a spell in the 90s and early noughties its large-format mixing consoles became a regular sight in pro studios. This popularity was partly thanks to the company’s collaboration with British audio circuit design legend Rupert Neve. That collaboration reached its zenith with the 2001 release of the highly acclaimed Amek 9098i.

This stunning console has now been resurrected by circuit modelling experts Brainworx, who have taken it as the basis and inspiration for their new bx_console AMEK 9099 channel strip plug-in. Although not officially licensed or endorsed, nor in any other way connected to Amek, Brainworx have used their technology to model the original circuitry at the component level before then adding in a few entirely new features to bring things up to date.

AMEK 9099 starts with a model of the 9098i’s input preamp which includes an input gain control and high- and low-pass filters. The filters’ default operating ranges can be modified so that they are more focussed on very low or very high frequencies (respectively). They can also be switched to different positions in the signal chain: directly following the input gain; after the gate and compressor; or operating only on the dynamics sidechain signal path.

The original console had dynamics processing on every channel, with a choice of 11 different processors, all of which would be controlled from the desk’s master section or from a computer running Amek automation software. To simplify things, Brainworx has condensed this down into three stages within AMEK 9099.

The first of these is the Gate module, which despite the name can also be switched to expander mode. What’s slightly unusual with this module (and was a feature of the original console) is the inverse button, which flips things so that the gate/expander is open when the signal is below the threshold and closed when above it – ideal for ducking and pumping effects. Brainworx has also added dedicated high- and low-pass filters to the gate’s sidechain path, which certainly come in handy and save you from having to dedicate the main input filters to the task.

Next up is a model of the 9098i’s compressor. This has a familiar VCA design, with threshold, ratio, attack and release controls. It also has a switchable hard/soft knee response. Brainworx has also included Amek’s clever Ambience button, which switches the output so that you only hear the gain-reduced part of the signal, helping you to dial in perfect compression settings. New additions here take the form of a compressor wet/dry mix control and a high-pass filter in the compressor’s sidechain.

The dynamics section is rounded off with a Limiter for a final round of peak-catching protection. Like the Amek original, this has a switchable Fast Attack mode, but Brainworx have also added a Clip feature which engages an ultra fast attack time and bypasses the release stage, ideal for catching very fast transients such as drums. Brainworx have also added to the limiter a makeup gain control and wet/dry mix control.

The plug-in’s dynamics modules are very simple to use, but that simplicity doesn’t impact on the effectiveness and silky-sounding results that the processors deliver. Where things start sounding seriously impressive, though, is in the plug-in’s EQ section. This four-band has the classic console configuration of two fully parametric bands alongside high and low shelving bands. The shelving bands can be switched into peak mode, and you can choose from two different curves/bandwidths, referred to as Sheen and Glow. This adds another level of flexibility to help you get the sound you’re after more quickly.

As with the input filters, you can place the EQ section at different points in the signal path – pre gate, post compressor, or sidechain – and the individual bands can be switched in and out, as can the entire EQ module. There’s also an Auto Listen feature that solos the band you’re working on whenever you’re interacting with its frequency or Q controls, which is surprisingly handy when fine tuning your EQ bands.

People often talk about the musicality of an EQ, by which they mean how sympathetically it handles musical content. This has a lot to do with the width and smoothness of the EQ’s frequency curve, but it’s also about how that band shape changes as different amounts of cut or boost are applied. This is a balance that Rupert Neve honed to near-perfection in his EQ circuits, and those found on the 9098i were no exception. Brainworx have done such a fantastic job of modelling those Neve-designed circuits that the plug-in’s EQ sounds like a genuine high-end British analogue EQ. Moreover, it feels like one too; and it benefits from forcing you to make EQ decisions entirely by ear, with no distracting graphical curves or graphs. This is how EQ should be.

The plug-in’s master section has both VU and PPM meters which can be switched between input and output metering, and that mimic the headroom normally used in analogue consoles. This can take a moment of reorientation when you’re used to DAW-style 0dBFS metering, but it does encourage you to mix with a bit more headroom. If that’s not for you, you can adjust the calibration manually if you prefer.

Stereo channels sport both a mono maker and a width adjustment. The former has a frequency threshold control so that lower frequencies can be tightened up without losing the width and space of the higher frequencies, while the latter uses standard mid-side processing to do its thing. All channels are finished off with phase reverse and mute buttons, and a nice chunky output fader.

The master section also houses controls for Brainworx’ signature Tolerance Modelling Technology (TMT) that models the tiny differences that are found between different analogue electronic components. This has been configured to give 72 different circuit variations, with each instance of the plug-in being able to use any of the variations, thus modelling the subtle differences heard between channel strips in an analogue console. It’s a clever and easy-to-use system that gives each instance a unique character.

With its clean, crisp super-analogue signal paths, its silky dynamics and buttery-smooth EQ, the Amek 9098i is widely regarded as the pinnacle of pre digital era analogue technology. What Brainworx has created with the AMEK 9099 is a near-perfect homage to that classic console, and one that will breathe astonishing life and character into your recordings and mixes. 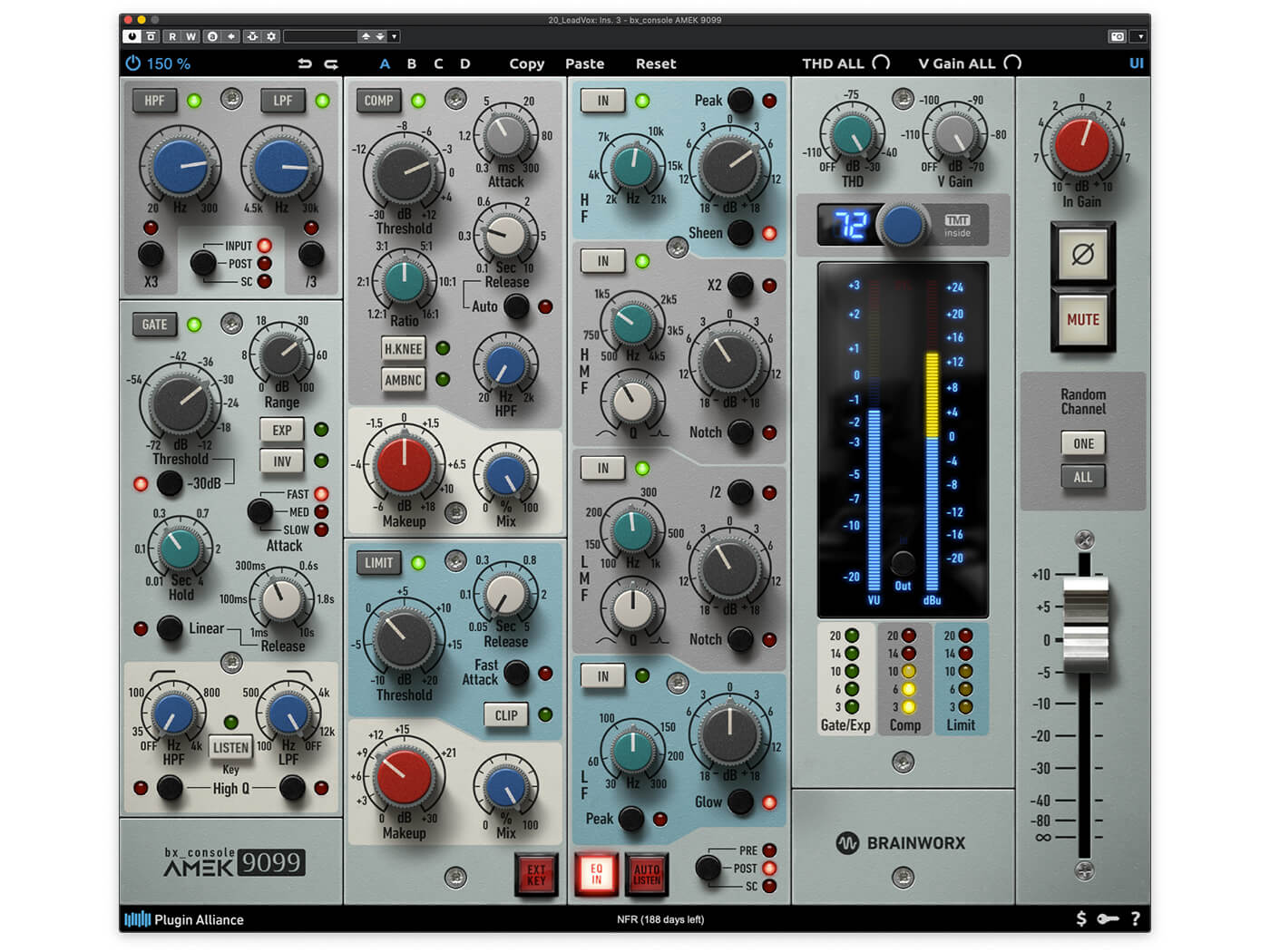