It’s been over a decade since popular sampler app SampleWiz hit our iPads and iPhones. Here are some new tech and tricks in this upgraded version. 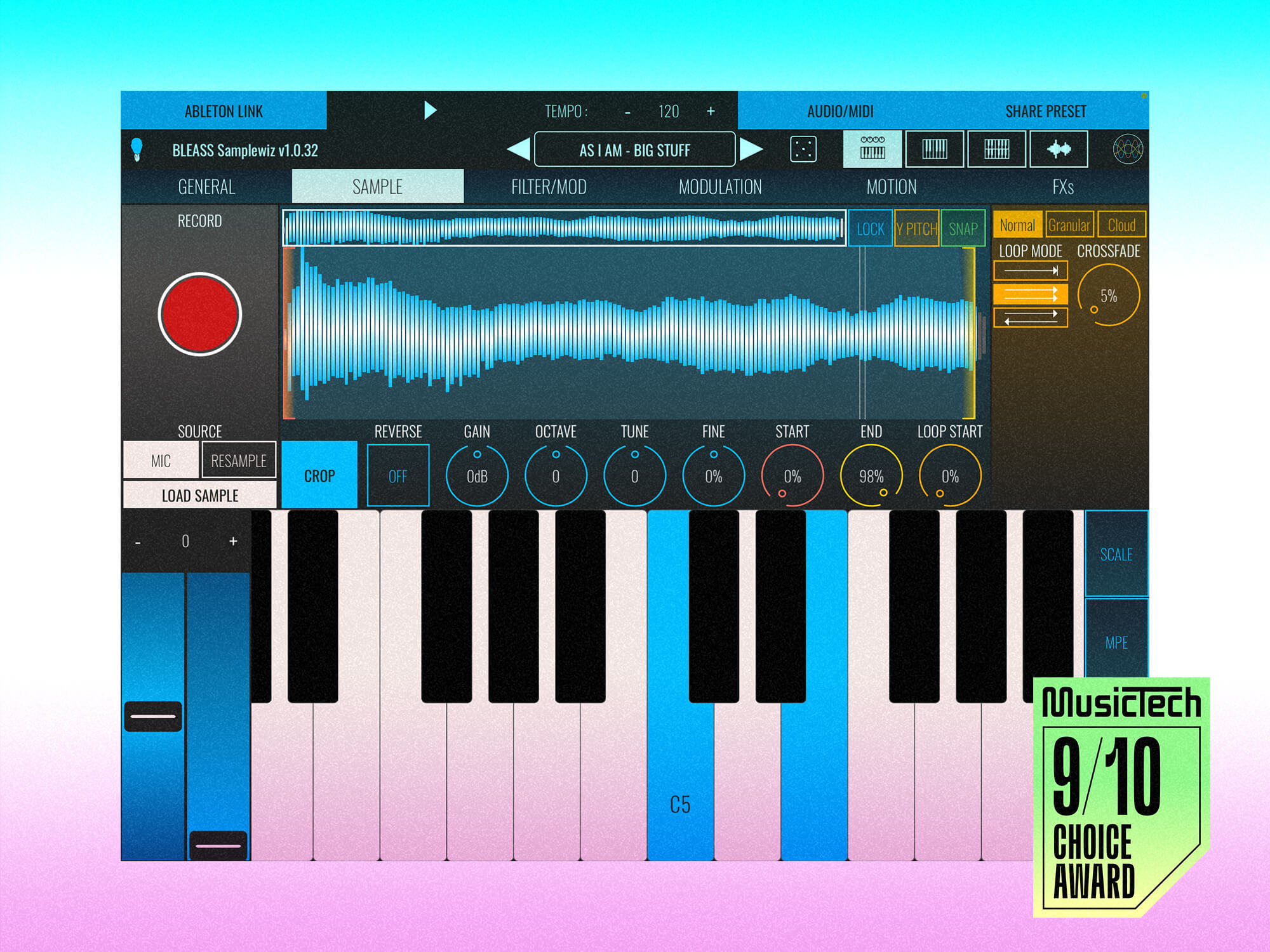 With the satisfying immediacy of classic samplers and the advanced sample-wrangling capabilities of modern software and processors, SampleWiz 2 is both fun and powerful.


The SampleWiz 2 is a new collaboration between French plug-in developers BLEASS and virtuoso keyboardist Jordan Rudess. It cleverly brings together the best bits of Rudess’ original SampleWiz app with BLEASS’ intuitive, tactile interface design and processing.

Available as an app for iPhone or iPad, the sampler instrument can run standalone, with inter-app MIDI linking to other apps, or natively within host apps that support AUv3 plug-ins. SampleWiz 2 also supports the network-based Ableton Link technology.

SampleWiz 2’s flexible sample playback engine lets it operate in one of three ways: a standard sampler, a granular sampler or, more unusually, a cloud sampler. Cloud is similar in many ways to granular sample playback, where small grains of the source sample are looped while the grain-sampling position moves through the sample. Where cloud differs is its ability to create a window around a defined point in the sample, through which a grain-sampling position sweeps through. 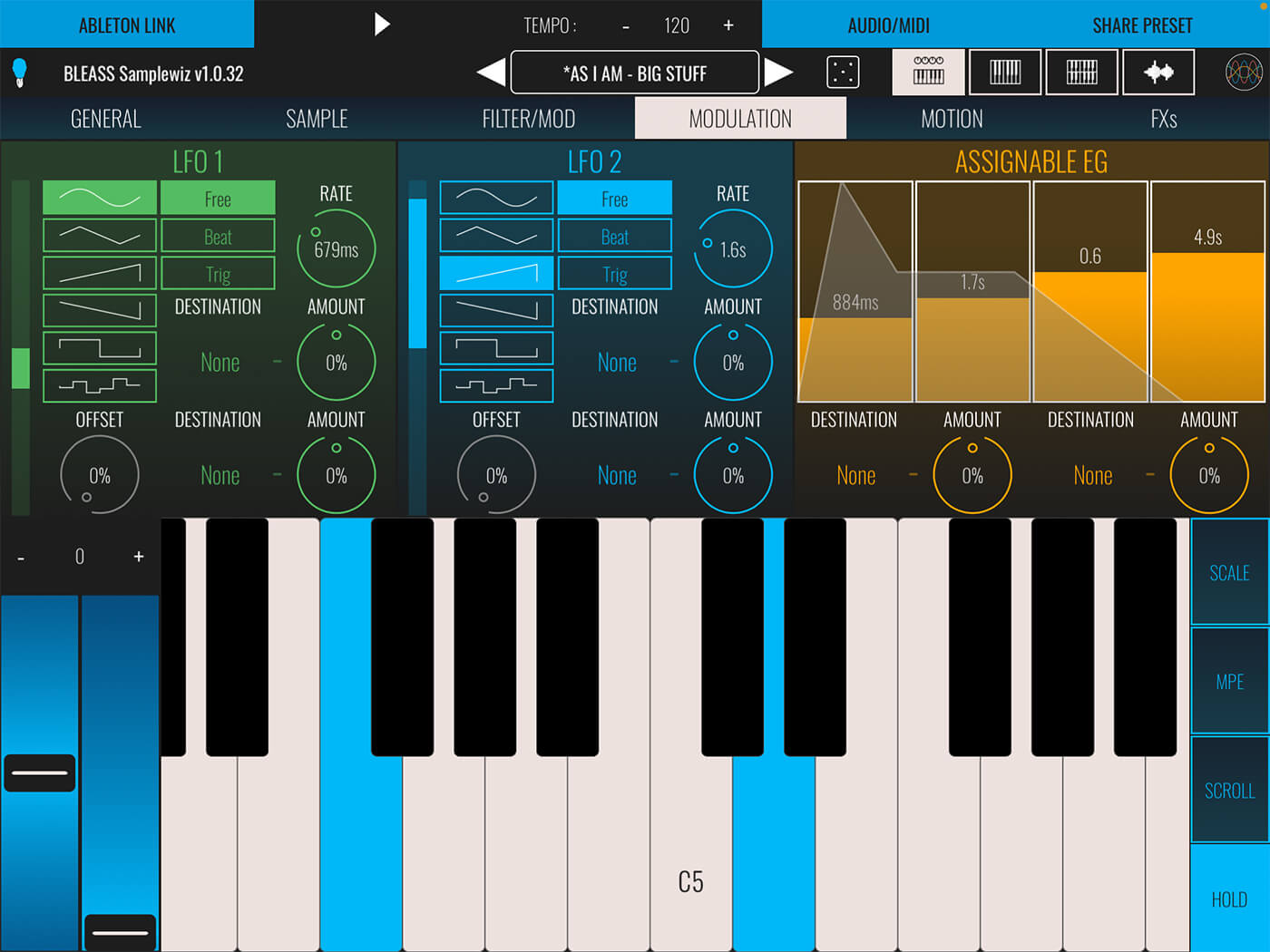 With easy control over all of the sound generation parameters no matter which mode you’re in, the SampleWiz 2 makes for a very versatile and multi-faceted sample engine. It comes loaded with a categorised library of over 150 presets, each with a sample hard-coded within it. So while you can’t directly import the bundled samples into another patch, you can repurpose a preset and its sample, and save or export the resulting patch to share with other devices or users.

Creating your own samples with SampleWiz 2 is a breeze, and it has the satisfying immediacy of old-school hardware samplers. Simply hit the record button to start capturing a sample from your device’s mic or audio input, or from the SampleWiz 2 program itself to resample a sound that you’re currently playing. When hosted in an AUv3 compatible DAW, the SampleWiz 2 plug-in can operate as an effect as well as an instrument. This is fantastic for real-time resampling or sampling other instruments and tracks.

Once captured, you can easily set sample start and end points, granular settings, and so on within the app’s synthesis engine. This starts with an overdrive processor that adds a multi-mode filter, and some grit and bite.

BLEASS has implemented the luscious filter found in its other synths, with tactile control and a choice of low-pass, high-pass, band-pass and band-reject filtering. A pair of ADSR envelopes control the amp and filter cutoff, and you can map a third auxiliary envelope to any two modulation destinations, as with the pair of LFOs.

Also included is BLEASS’ clever Motion Sequencer (see our review of BLEASS Alpha Synthesizer for more on this), and an effects section featuring delay and reverb. The Shimmer feature is also brilliant for adding a pitch-shifted delay to the sound – perfect for ambient textures. 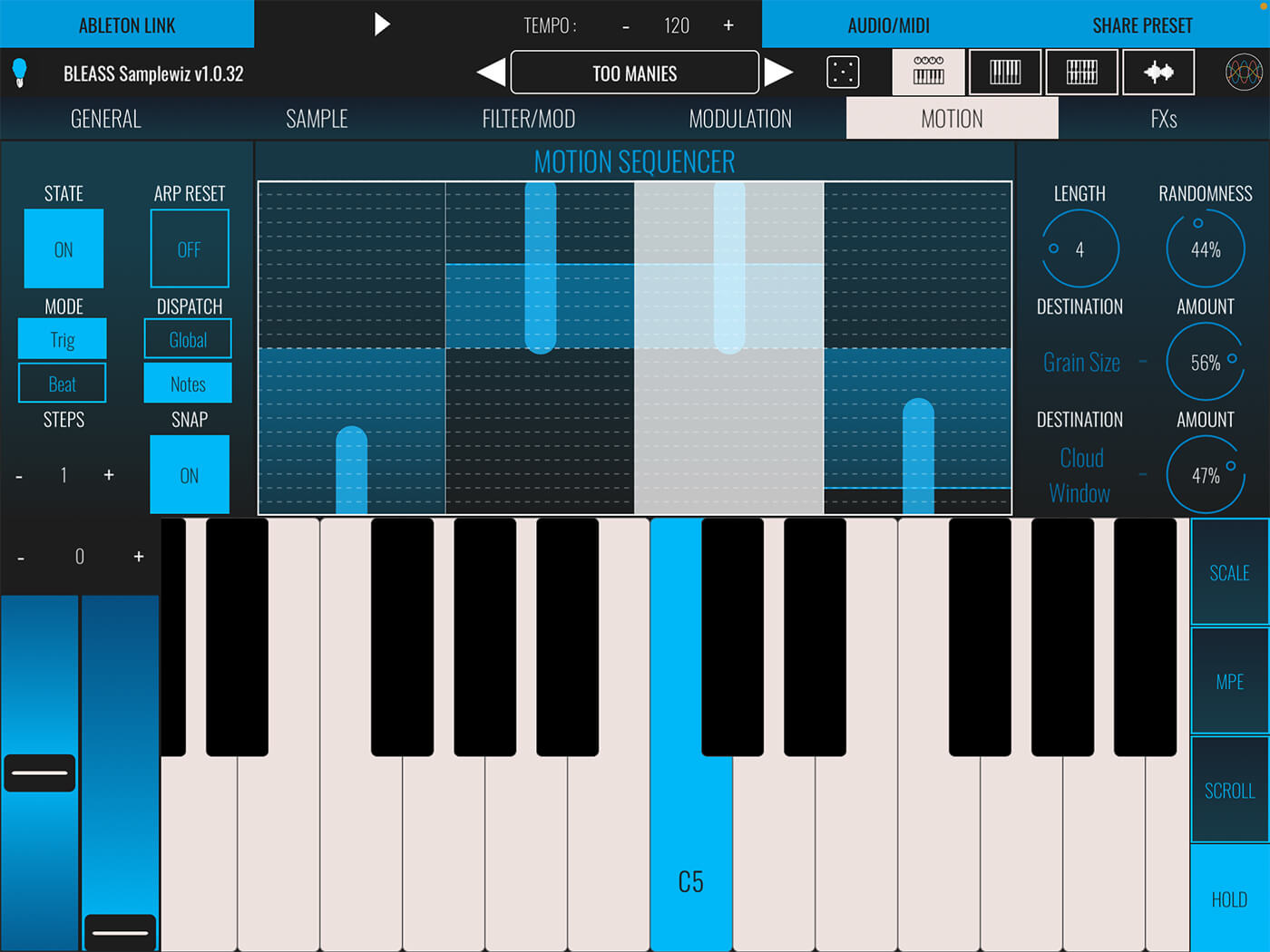 The built-in keyboard has multiple views, including an MPE view in which a note’s pitch changes smoothly as you drag your finger left and right over the keys, while an up-down movement adjusts pressure control.

This gives you some fascinating and expressive ways to play the instrument. Furthermore, SampleWiz 2 can be played with by interacting with the on-screen waveform. This is useful enough for trimming, editing and triggering your samples, with an additional pitch control – either snapped to notes or free-ranging – enabled by the “Y PITCH” button.

SampleWiz 2 can create pretty much any type of sound you want it to – if you can sample it, the plug-in can make an instrument from it. The included presets cover a huge amount out of the box, but it’s the gorgeous simplicity of the sampling process that really stands out.

There’s no messing around with zones or groups or scenes or any of the rest of it – just grab a sound, tweak its start and end points with a finger, and you’re ready to go. At just $20, SampleWiz 2 is almost too good to miss … and at the special intro price of just $9.99 it is too good to miss. 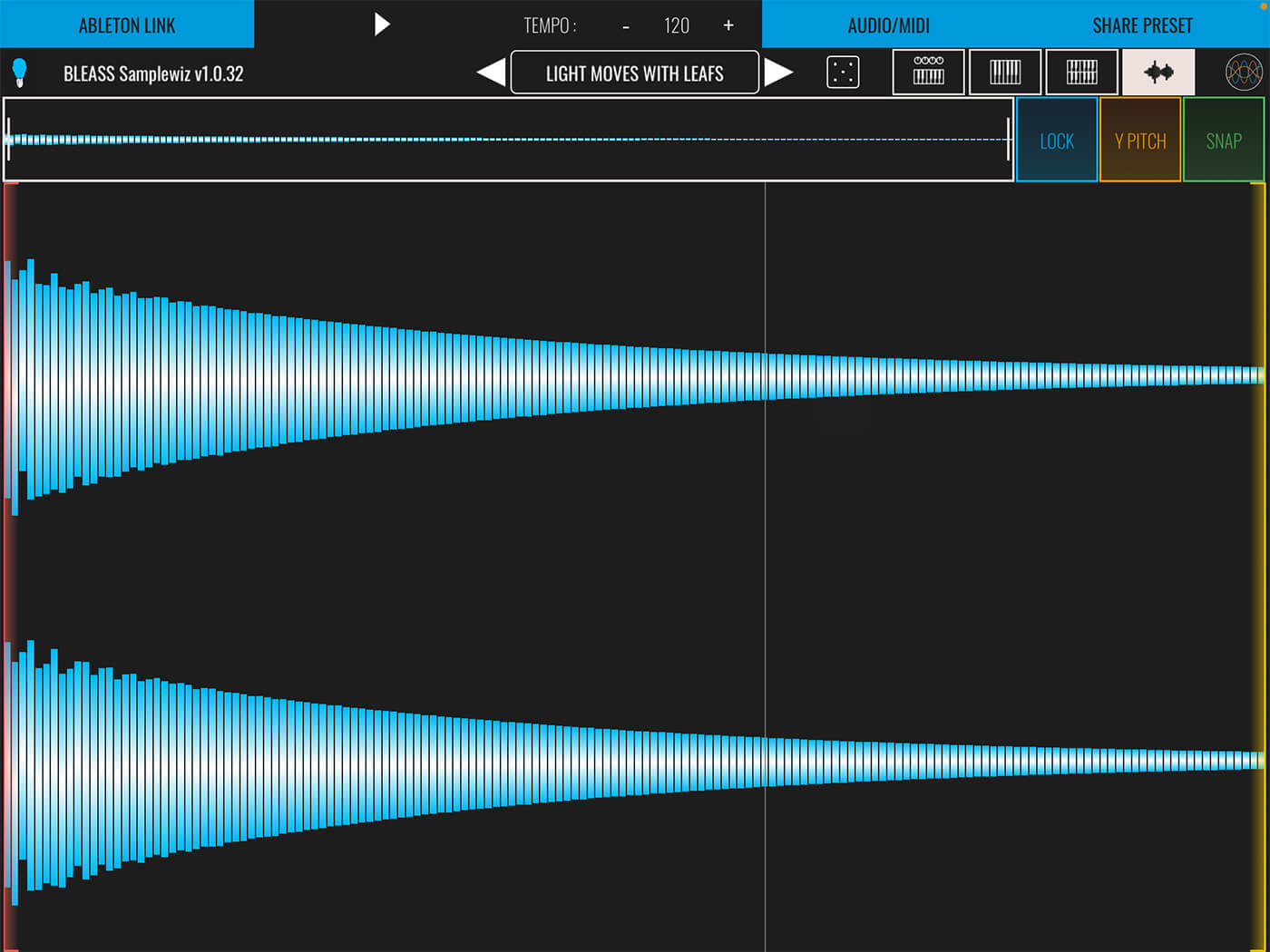