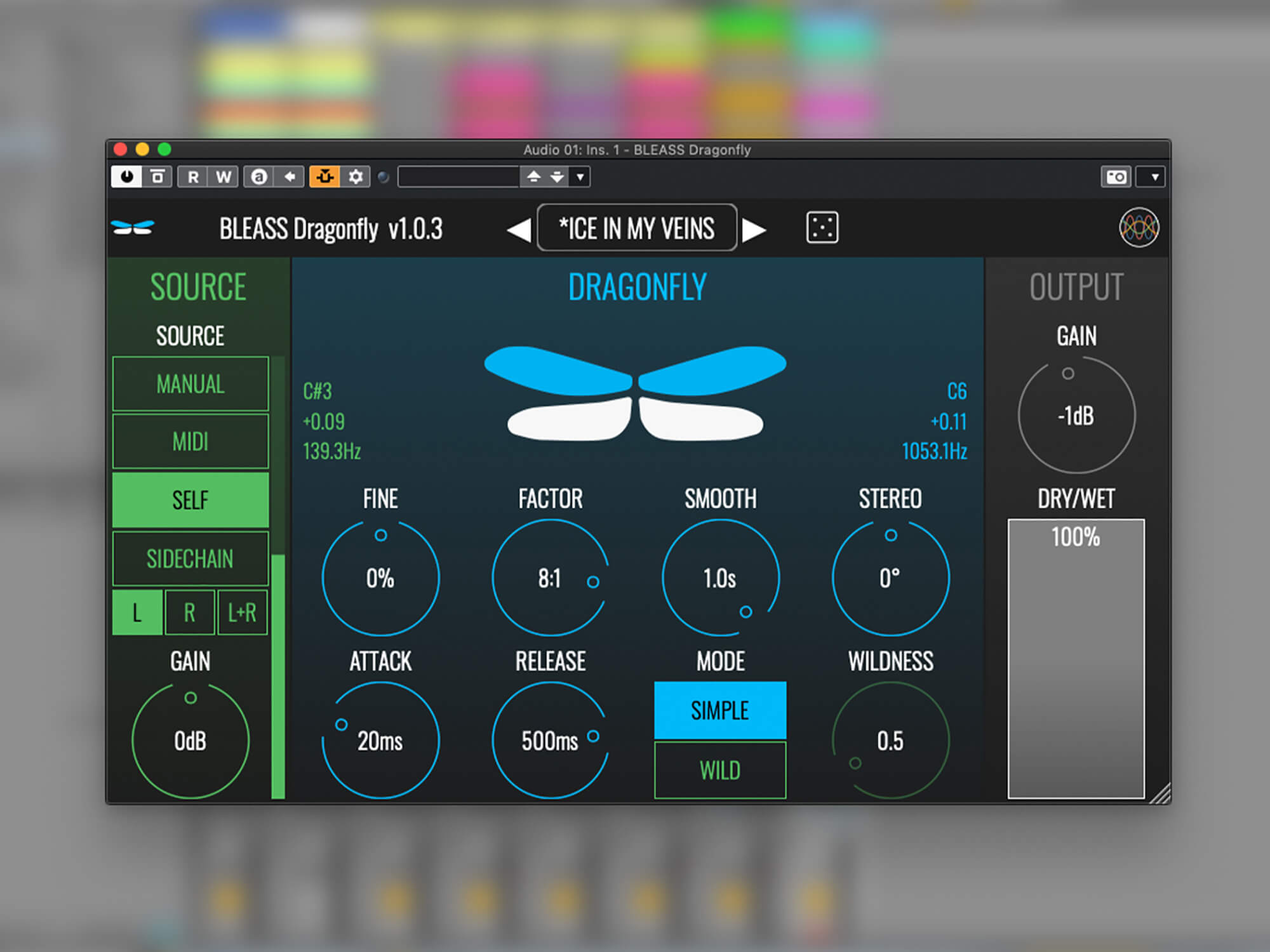 ⊖ Volume jump when switching to Wild mode can be startling
⊖ Animated dragonfly graphic is pretty, but pointless at higher rates

Amplitude modulation, aka tremolo, is regularly used in synthesis. At LFO-rates it creates an often boring “wow-wow-wow” effect, but when driven by an audio-rate oscillator the waveform distortions caused by the rapidly fluctuating amplitude lead to all sorts of interesting overtones and timbral changes. If you wish to create a similar effect on an audio signal then you could reach for a sampler, but BLEASS’ new Dragonfly is much more convenient.

Dragonfly bases its modulation effect on one of four possible sources, the most basic being “Manual”. In this mode, the modulation frequency can be dialled in directly as a rate in Hz multiplied by a factor value. With a rate range of 1Hz to 100kHz, and a factor range of 1/128 to 32, this gives a vast breadth of theoretical modulation frequencies, from one cycle per 128 seconds (1/128Hz) all the way up to a so-huge-it’s-hilarious 3,200,000 cycles per second (3.2MHz)! In reality, though, Dragonfly maxes out at 120,000Hz.

This is because while audible distortions are created by tremolo frequencies that are well above the 20kHz-or-so limit of human hearing, you’d need a bat’s ears to notice those signal distortions once the frequency starts heading north of 100kHz.

Switching to MIDI source mode allows Dragonfly’s tremolo rate to be driven by MIDI notes. The factor multiplier remains, with the rate control replaced by a Fine parameter that detunes the specified MIDI pitch by ± 50 cents. With no incoming MIDI note, audio passes through Dragonfly unaffected; when a note is played Dragonfly uses Attack and Release parameters to determine how quickly full modulation is reached, and how quickly it dissipates when the note is released. If MIDI notes are played legato, the rate at which Dragonfly’s modulation frequency changes can be controlled too using the Smooth dial. In essence, this means you can create and play overtones as though they were notes on a synth – very cool! 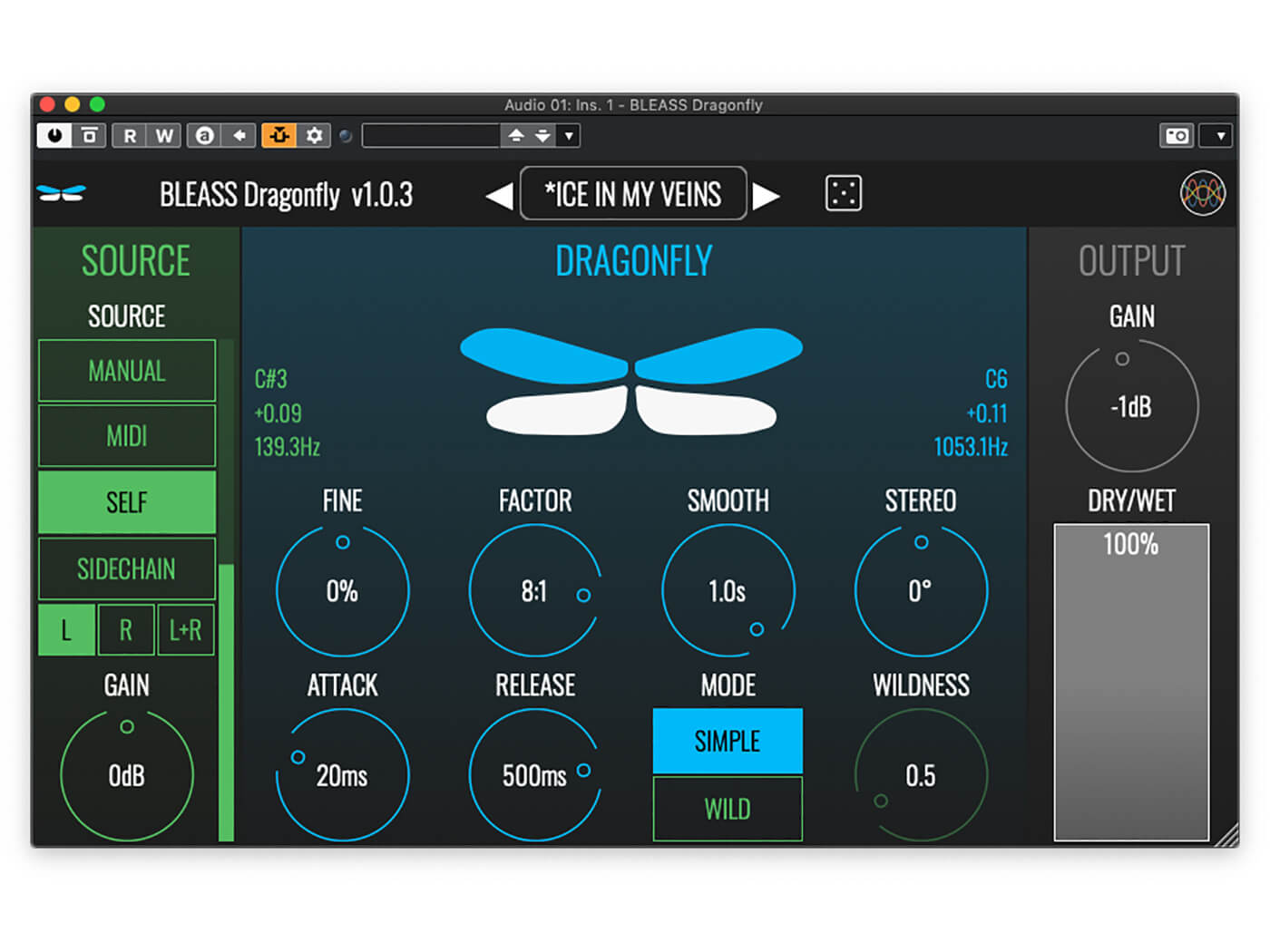 The remaining pair of source modes, Self and Sidechain, base Dragonfly’s modulation rate on the frequency of either the signal being processed or an external sidechain signal. As with MIDI mode, the base frequency can be detuned, is passed through the factor multiplier, and can be shaped with attack, release and smooth controls. Both modes can create some astonishing and unexpected sounds.

However, perhaps the most versatile – even crazy – mode is Sidechain. Imagine making a sweet, breathy vocal growl and snarl in sympathy to a bassline… can’t imagine it? Check out the hook in Billie Eilish’s Xanny and you’ll get the idea!

Whatever the source mode, the modulation frequency is visualised by a graphic that looks like a set of dragonfly wings. The upper pair stretches and contracts in time with the left channel’s modulation, the lower pair sync to the right channel, resulting in the wings beating in time with the modulation. As well as creating a much wider-sounding effect, offsetting the left and right modulations using the Stereo dial causes the upper and lower wings to beat out of sync with each other. It’s all quite mesmerising at lower speeds but quickly becomes imperceptible as you crank up the modulation rate. 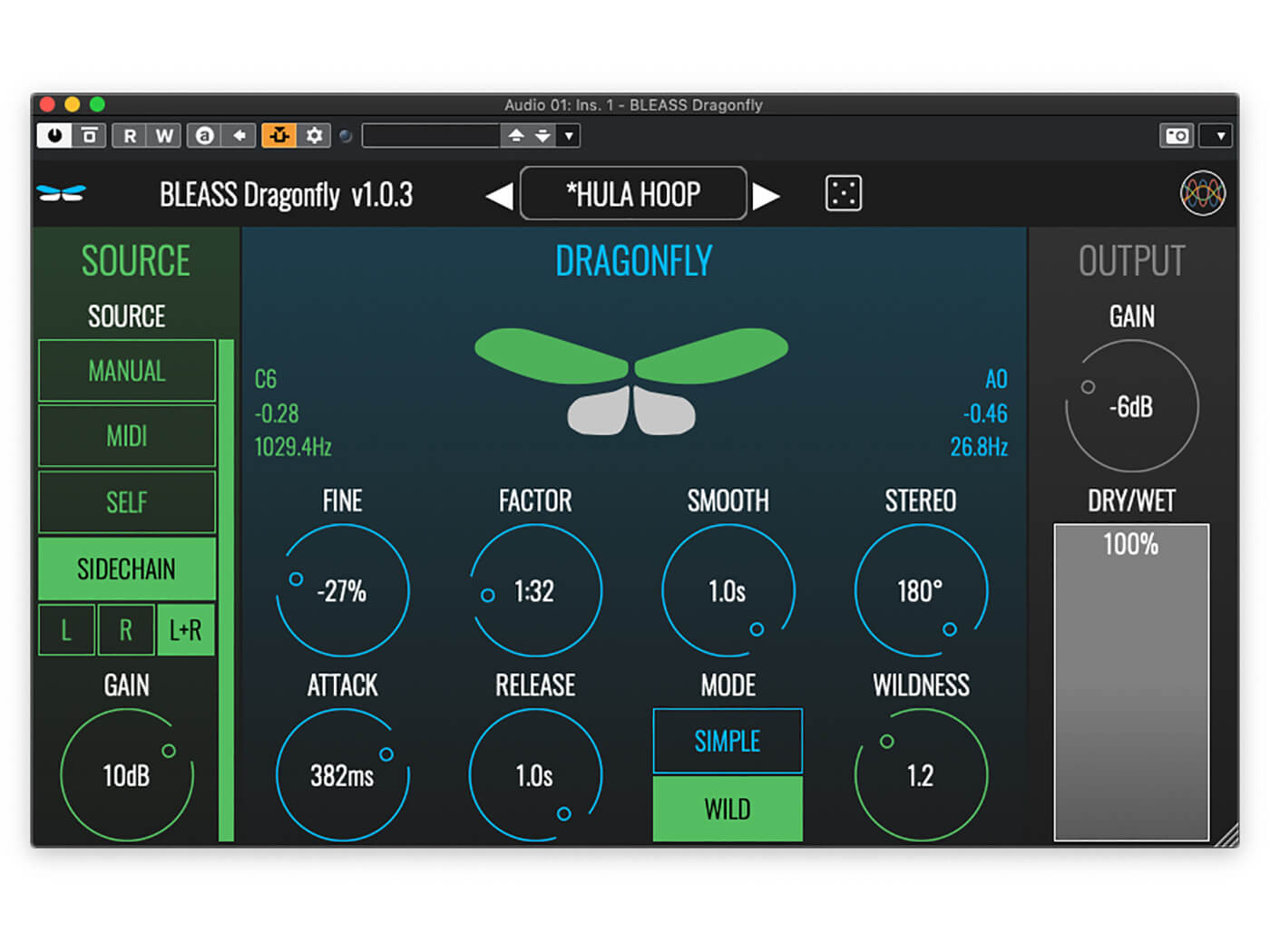 As a final twist in Dragonfly’s tail, switching its main process from Simple mode into Wild mode enables a waveshaping algorithm that adds a big heap of saturation to the plug-in’s sound. This makes things much fatter and dirtier, and can make Dragonfly’s distortions and sidebands much more prominent. Wild does give a hefty volume boost though, so needs to be balanced by the output level control, especially because there’s no built-in limiter for protecting your monitors and ears. A built-in limiter or some king of gain compensation might have been a useful inclusion.

With Dragonfly, BLEASS have taken a classic and often overlooked effect and brought it bang up to date. It’s great for adding character and interest to synths and other bedding parts, it can create fascinating pulses and rhythms if driven from a rhythmic part, and gives you loads of options for forging exciting and original-sounding vocal effects. And, in keeping with all BLEASS plug-ins, it’s fantastic value, looks slick and modern, and is a heap of fun to use.