The German mic and headphone expert aims its latest mics at creators, but they’re studio workhorses, too. 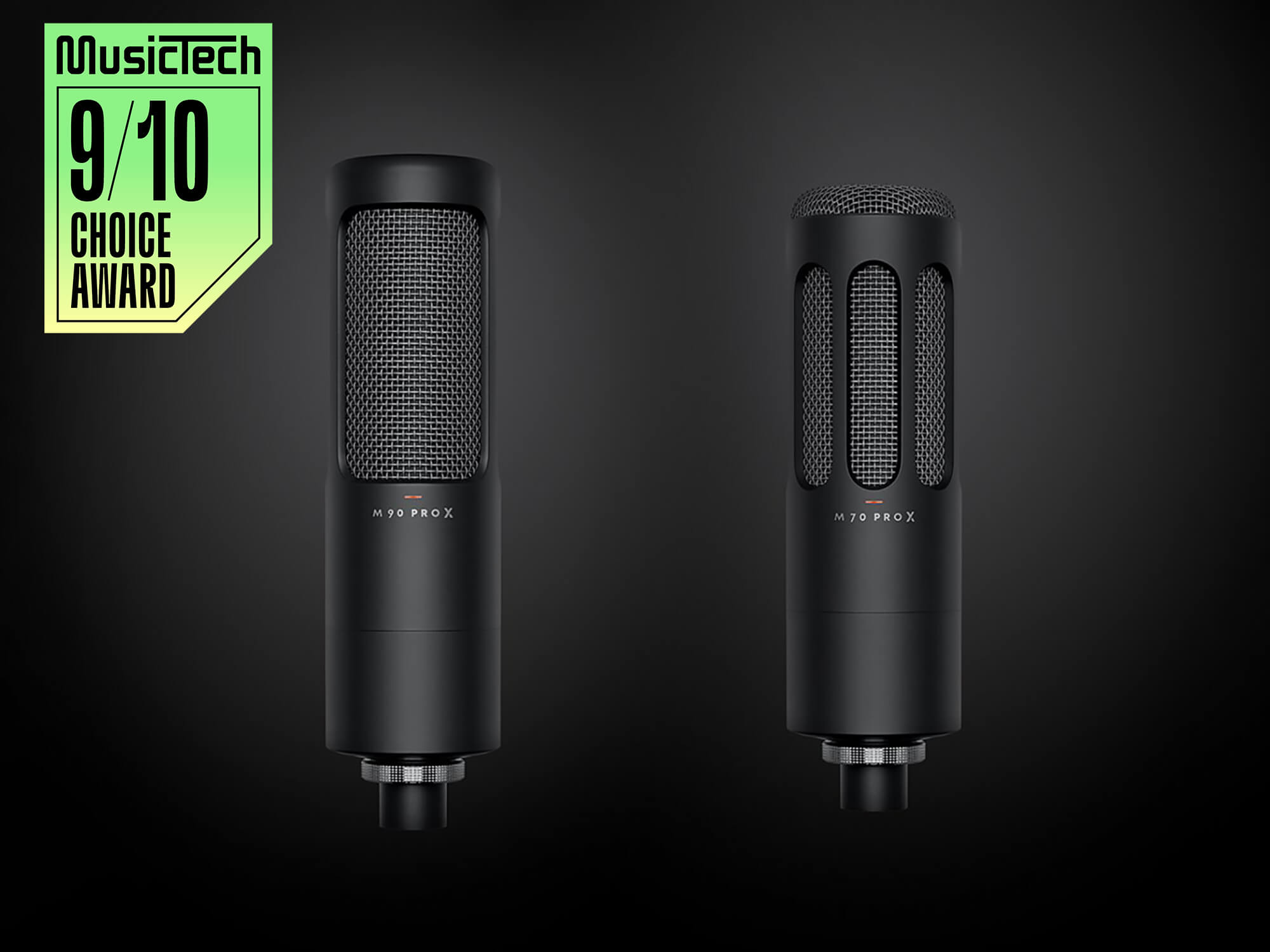 Think of long-established transducer specialists Beyerdynamic, and there’s a 50/50 chance that the first product that springs to mind is a microphone or a set of headphones. It’s fitting then that the German company’s latest Pro X range comprises two of each. We set up the M 70 Pro X and M 90 Pro X and get up close and personal with the new mics.

Although visually similar, the two new mics are distinctly different. The M 70 Pro X is a dynamic mic with a speech-optimised sound aimed at content creators. Meanwhile, the M 90 Pro X is a true condenser microphone designed for critical recording and broadcasting applications. Common to both mics is the inclusion of a thoughtfully engineered shock mount, and a pop filter – a proper one, not a foam sock.

The dynamic fixed cardioid M 70 Pro X resembles a cross between the classic Electro-Voice RE20 and Shure SM7B. Like those well-known mics, the M 70 is a top-address (or front-address) microphone, and it’s a good deal lighter in weight than an RE20, so isn’t prone to drooping at inconvenient moments. Lightweight doesn’t mean flimsy here, though, as the high-quality aluminium housing is built with a “break-proof” steel mesh to protect the delicate capsule.

All essential components such as capsules, circuit boards, plugs, and casing can be repaired or replaced should a fault develop; there’s no throwaway culture here. This commitment to environmental issues extends to the packaging, too, which omits plastic by using completely recyclable paper and cardboard.

As the M 70 is primarily a broadcast microphone, it has been voiced to produce a rich, upfront radio studio sound. And while you get a beautifully deep and chesty tone when working in close proximity to the mic, it doesn’t fall victim to the proximity effect, so when you back off from the mic, the firm bottom-end remains intact.

Sharp focus and excellent room-rejection characteristics are two more attributes that will win the M 70 Pro X many fans. Not everyone has the luxury of an acoustically treated studio, so as long as you’re not broadcasting from an echo-drenched bathroom or kitchen, your voice should remain crisp and dry.

As well as being an extremely clear and articulate performer for speech, we’d also recommend the M 70 Pro X for lead vocals – especially for singers who like to scream and shout directly into a mic, as it can ably handle high SPLs. And as a close-mic on drums, its full-bodied tone is particularly suited on floor-toms

Moving on to the M 90, we are in more familiar recording studio territory. A true condenser design, the microphone features a 34mm capsule and employs newly developed electronics that dovetail with the capsule. Beyerdynamic remains tight-lipped about the materials used to produce the capsule, so we’re unable to tempt you with talk of gold-sputtered diaphragms and other exotic components. A low-noise op-amp and a precision voltage controller are used for the mic’s amplifier circuit and, in practice, the mic’s inherent self-noise is vanishingly low. An integrated elastic suspension system is incorporated to protect against mechanical vibration, which works well in isolating the mic from floor-bound vibrations.

Interestingly, Beyerdynamic says it drew inspiration for this new shockmount from the Japanese maple, which, despite its comparatively thin branches, can bear an enormous weight and endure great strain.

Like its dynamic stablemate, the M 90 has a fixed cardioid polar pattern. However, while the M 70 is optimised for speech, the M 90 is a versatile large-diaphragm studio microphone, suitable for vocals and all manner of instruments.

As both of these mics have been designed to excel with voices, we pressed the M 90 into action to record some vocals. It’s immediately evident that the microphone has an unhyped response with no hint of excessive brightness. The uppermost frequencies have a glossy sheen rather than the air and sparkle associated with many modern mics. We prefer this type of top-end response for lead vocals as it permits you to dial in some super-top air of your choosing; a 16kHz boost from a Pultec EQP-1a is our first choice for this type of EQ.

Elsewhere, the midrange is clear and accurate, with good detailing and natural presence. There is a touch of warmth in the lower mids, which could prove helpful when recording singers with thin or nasal sounding voices, but thankfully this warmth does not translate into wooliness.

On acoustic guitar, the full-bodied nature of the M 90 is apparent, lending the instrument a creamy character. In contrast, our vintage Neumann U 67 makes the same guitar sound darker around the edges. The only obvious omission is an onboard high-pass filter, which would be useful in this scenario. It’s no great loss; it just becomes a job for the preamp or DAW channel strip.

Placed around two feet in front of a Fender Bassman cab, the M 90 comes into its own, capturing all the weight and power produced by the speaker. In this application, the mic performed brilliantly, and we can imagine many engineers choosing it for bass recording.

Swapping out the M 90 for the M 70 on the Bassman reveals the uniform voicing characteristics of these Pro X microphones. A similar low-end weight is evident, while the upper bass has a punchier tone with more thump. With this in mind, we tried both mics on a kick drum tuned and damped for rock music. You can capture a tremendously solid kick drum sound by placing the M 70 inside the drum, pointing towards the beater with the M 90 around eight inches from the front head. This coupling sounds easily as good as the classic AKG D112 and Neumann U 47 FET pairing.

So then, here we have two excellent multi-purpose microphones, each expressing rich and full tonal characteristics. Although you don’t get built-in features such as HPFs and attenuation pads, they remain highly versatile mics able to capture all manner of sound sources.

Beyerdynamic must have its reasons for marketing the M 70 as a broadcast mic; however it’s sure to become a firm favourite in recording studios as a brilliant workhorse dynamic microphone.

At 249 Euros, the M 70 Pro X is less expensive than a Shure SM7B, which is probably its closest competitor, while the M 90 Pro X is a steal at just 299 euros, considering the quality of this condenser mic. Both represent superb value for money and should be high up on the audition list of content creators, broadcasters, home producers and studio professionals alike. They both offer outstanding bang for one’s buck.

Gear Of The Year: Best hardware synth of 2021

Gear Of The Year: Best audio interface of 2021