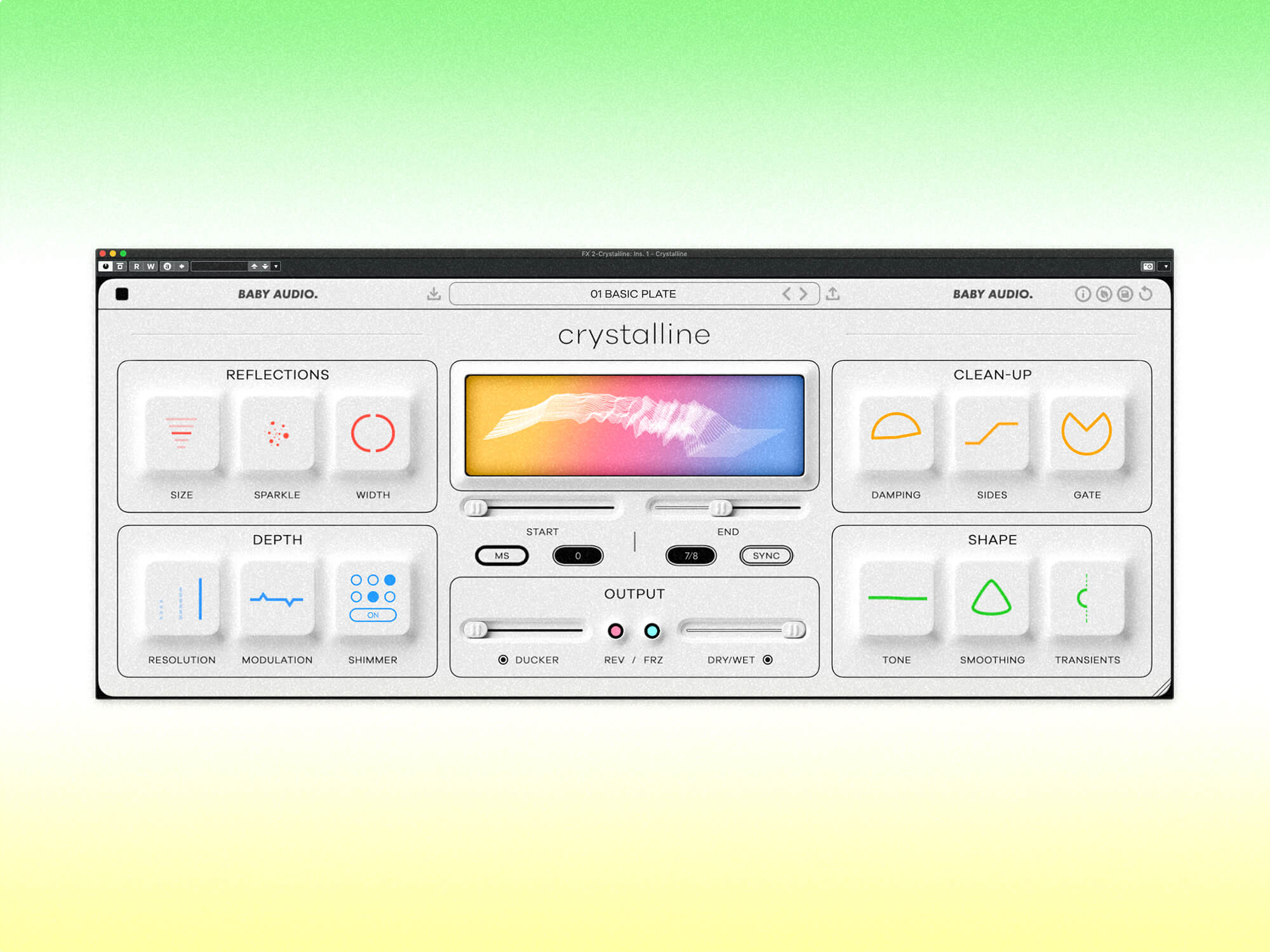 Would prefer Freeze on/off switch to be momentary

The results that the early pioneers of algorithmic reverb achieved using the processing hardware of the day is quite remarkable, with vintage classics by the likes of EMT, Lexicon and AMS still highly revered. Consequently, many modern reverb plug-ins base their algorithms on those classics, perhaps adding some density here and an extra filter-or-two there.

No more echoes of the past

It is common for an algorithmic reverb processor to include a number of different reverb types – the eponymous algorithms themselves – each geared towards mimicking different types and shapes of room, plate or spring. Crystalline’s workflow is slightly different, exposing parameters that allow you to change the underlying reverb characteristics in a more direct manner. So, for example, rather than selecting between a small room or large hall algorithm, Crystalline lets you control the size and reflection characteristics independently of each other.

This may sound like an extra layer of complication but, thanks to Baby Audio’s clever interface design, it really isn’t. The most important parameters are arranged into four groups that represent the different reverb processing stages – Reflections, Depth, Clean-up and Shape – each containing just three (largely) self-explanatory parameters. This is all presented within a clean, tactile, modern-looking interface in which traditional knobs and dials are eschewed in favour of interactive widgets that use icon-like graphics to illustrate both the parameter they control and the current parameter value. It’s all very natty and intuitive.

The basic reflection characteristics of the imaginary space Crystalline creates are configured within the (you guessed it!) Reflections section. The room size can be set in five steps ranging from “tiny” to “spacey”, whilst the brightness of the reflections – their ‘sparkle’, as Baby Audio refers to it – is freely adjustable. The stereo spread of reflections is also controlled here, and can run from mono, through a natural stereo image, all the way to an artificial super-wide spread.

The Depth section provides access to further details of how Crystalline generates its reflections. The density of reflections can be set in three steps, and a slow modulation can be added. This modulation can enhance the overall density of the reverb sound, but also creates a shifting pitch focus within the reverb that can sound a bit incongruous when it stands out too far. It’s good in busy mixes, though, and useful as something of a special effect.

Of particular note here is the Shimmer setting, which increases the decay time of higher frequencies. This can create a lot of space in the sound, as well as allowing a lot of variety. The threshold frequency where this effect kicks-in can be set to 2kHz, 4kHz or 8kHz, with the decay times increased by 2x, 4x or 6x.

The remaining two groups of controls provide tools that sculpt the generated reflections. Tonal characteristics can be modified with a damping control that’s a combo of LPF and HPF. There’s also a high-pass filter that only affects the stereo side signal, allowing you to remove weight from the width of the reverb whilst keeping it intact in the centre of the stereo image. A tilt EQ makes it easy to shift the tonal emphasis of the reverb, whilst a Smoothing control increases the strength of a preset EQ curve designed to reduce common problem frequencies.

In addition to these frequency-centric modifiers, there’s also a built-in gate for those classic gated reverb effects, and a transient processor that allows either the attack or sustain portions of the reverb sound to be accentuated.

Rather than using concepts of pre-delay and reverb time, Crystalline provides simple start and end sliders for controlling the overall reverb timing – start is analogous to pre-delay; end is analogous to reverb time. These can be set in familiar milliseconds, but what’s particularly interesting is that they can also be flipped to a DAW-synced mode, allowing the start and end times to be expressed as note lengths. This makes it easy to create rhythmic and timed reverb effects, but can cause problems if your project contains tempo changes because the resulting change in the pre-delay time can create weird pitch-shift artefacts (much like when adjusting a delay plug-in whilst the sound is playing).

Pre-delay is of course a good way to help the direct signal stand out from its associated reverb, but Crystalline’s built-in ducker can be similarly helpful, reducing the level of the reverb signal when the direct signal is present.

The reverb controls are topped off by a reverse switch and a rather fun freeze effect that, when enabled, takes a snapshot of the current reverb sound and loops it. This can be used to create some really nice effects, but we felt it would benefit from being a momentary switch rather than an on/off toggle switch.

Finishing things off is a nice visualisation in the form of a 3D graph showing a spectrum analysis of the reverb over a short period of time. It’s quite a small readout so isn’t useful for accurately identifying specific problem frequencies, but it does provide a rough guide, and it helps you to understand how the reverb’s frequency make-up is changing over time. It’s kinda pretty too!

With a traditional algorithmic reverb, the first step to creating an ambience is to choose the type of reverb you want to use – room, auditorium, plate, etc. By breaking away from this traditional approach Baby Audio has created a processor that is both flexible and very intuitive to use, and which is therefore much easier to tailor to fit the task at hand (whatever that task may be).

The reverb quality is outstanding too, whether creating huge, bright and sparkling washes, warm, dark and tight resonances, or anything in between. This quality does come at the cost of eating up a chunky slice of RAM and CPU cycles, but this is true of all good-quality algorithmic ‘verbs (and Crystalline does have an eco mode that trades some reverb complexity for a lighter footprint).

So, all in all, there’s an awful lot to like about this thoroughly modern take on algorithmic reverb, and very little to dislike – grab the demo and see for yourself!