The characteristic sound and expressiveness of frequency modulation has made it a mainstay of the synthesis world, so how will it fare when used as an effect? 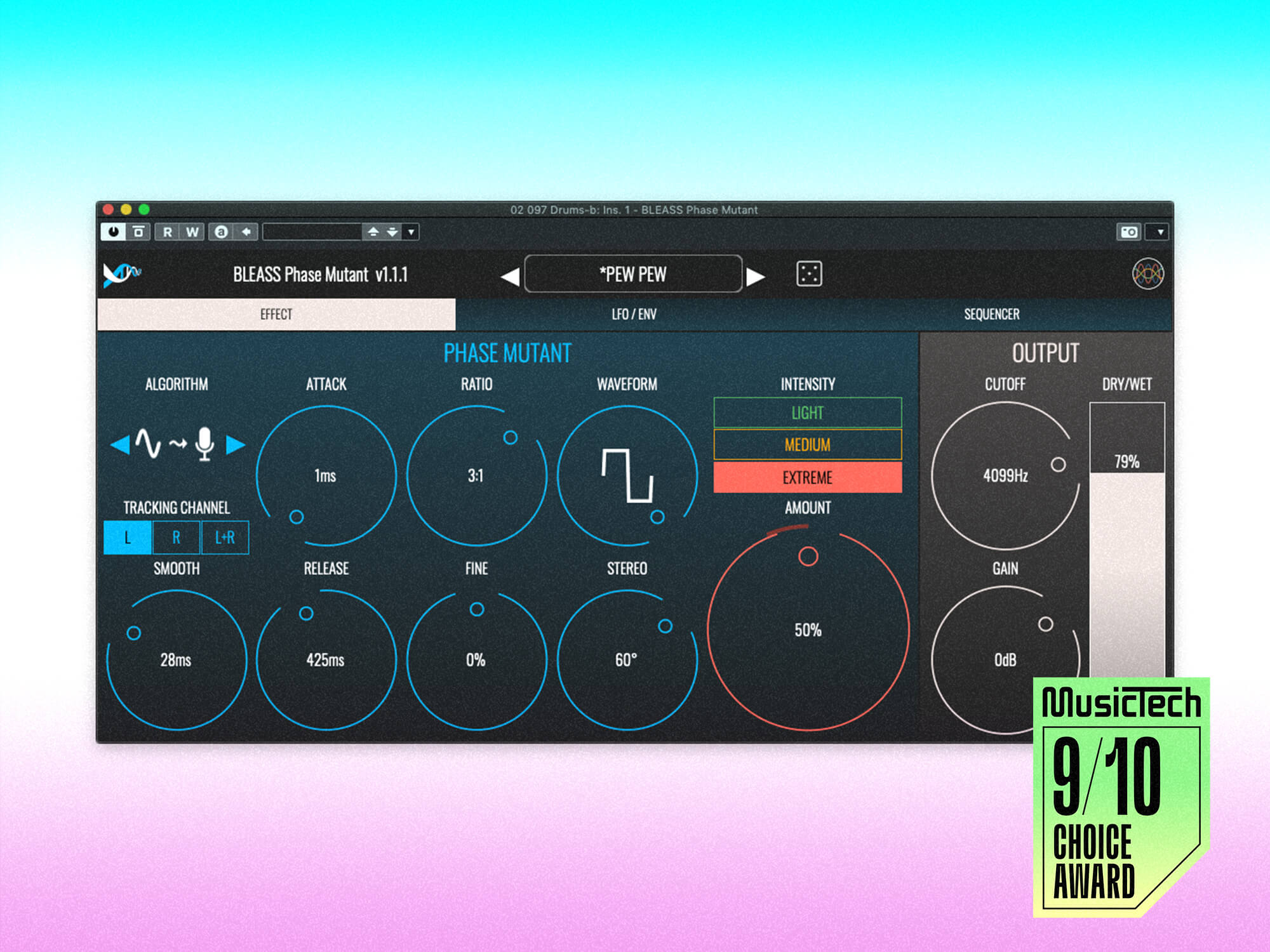 During the development of its recently released FM synth, Omega, French plug-in developer BLEASS had something of a brain wave: Why not take the FM processing modules it developed for Omega and repackage them as an effects processor?

The result, Phase Mutant, is essentially a distortion generator (FM is, after all, a form of distortion), but one that creates a range of textures and colours unlike anything else.

Phase Mutant isn’t the first plug-in to harness FM as an effect: KiloHearts offer a Phase Distortion plug-in and there’s one in Logic Pro, both of which allow the input signal to modulate itself. The difference with Phase Mutant is that, alongside this self-modulation ability, the input can also modulate a built-in oscillator or be modulated by that oscillator.

The base frequency of Phase Mutant’s oscillator is tracked from the input signal so that it always maintains a pitch relationship to that signal. And, in good ol’ FM style, this base frequency is then multiplied by a pitch ratio, with different ratios resulting in different harmonics being introduced into the effected signal.

An additional +/- 50 cent tweak of fine-tuning can be dialled-in to the oscillator’s pitch, too. Although this does create useful changes in the resulting sound, especially when the parameter is being modulated or automated, it’s a shame it isn’t possible to dial in a bigger pitch offset too.

The pitch detector can affect the left, the right, or the summed left and right channels of the input signal. The tracking response time can be adjusted too, which at low settings helps to smooth out small pitch fluctuations, and at higher settings causes the oscillator’s pitch to lag behind the input pitch, to fascinating effect. The speed at which the oscillator’s frequency changes can be further controlled with attack and release controls.

More tonal changes can be created by changing the oscillator’s waveform, which can morph from a sine wave, through triangle and sawtooth waves, to a square wave. The plug-in can also shift the phase of the left and right channels in order to create stereo widening effects.

Phase Mutant’s three different routing options – input modulates oscillator, oscillator modulates input, and input modulates input – are treated as FM algorithms. In essence, the first item in each pairing is the modulator and the second is the carrier. And, as in FM, the overall sonic impact is determined by how strongly the modulator is modulating the carrier. In Phase Mutant, that modulation strength is determined by an intensity setting – light, medium or extreme – coupled with an Amount dial that gives finer control within the chosen intensity setting.

Borrowing from BLEASS’ stable of instruments, Phase Mutant includes two LFOs, an envelope generator, and a step sequencer, all of which act as modulation sources (parameter modulation, that is, not frequency modulation!). Each can be mapped to any two of Phase Mutant’s parameters.

The LFOs offer a range of six waveforms and can run freely or be synced to your DAW. The envelope generator is of a simple attack-release variety and is triggered by transients in the input signal. There is no threshold level for this trigger; instead, a gain control is used to adjust the sensitivity.

The step sequencer is an advancement of the Motion Sequencer found on BLEASS’ Alpha, Omega and SampleWiz 2 synths, allowing you to add differently-shaped curves to each step of the sequence rather than just static values. This allows you to create highly complex, constantly changing modulations that are nonetheless rhythmic and looped. The step sequencer always syncs to your host DAW, but unfortunately does not also have a freewheeling mode.

If you’ve ever programmed an FM synth, you’ll be familiar with how, when increasing the level of an FM modulator, you hit a threshold beyond which the onset of dirt and distortion is rapid. Phase Mutant has a similar characteristic in that, at low strength settings, the effect can be quite harmonious and musical, but as the intensity and amount are increased a point is reached where things flip quickly into dirtiness and mayhem. Getting the effect amount perfectly balanced around this point can create some hugely dynamic effects, as small changes in the input signal lead to big timbral changes in the plug-in’s output. This can work particularly well with rhythmic parts and loops.

At all strengths, the sound is heavily influenced by the algorithm being used. The plainest option is input-modulates-input, which goes from a phased-type sound at low intensities to a crunchy, gritty distortion as the intensity is increased. Whilst being very dynamic, this distortion is also quite hard-edged, even harsh, but this can be alleviated with the basic non-resonant low-pass filter present in the plug-in’s output section.

Using one of the oscillator-based algorithms produces far more colourful results that ooze with FM character. Pitched parts respond particularly well here, with Phase Mutant able to add a layer of authentic ‘FM-ness’– woody tones, deep resonances, metallic dissonances, and all the rest of it – to anything you throw at it. This can introduce so much variation and movement to a part, from subtle to extreme, and we found it particularly fun to use as an effect on subtractive synths. Doing so creates an awesome hybrid of analogue and digital sonic sensibilities, all of which can be tweaked and controlled as you play.

With Phase Mutant, BLEASS has created a rather unique effect that can complement a wide range of different sound sources and is a lot of fun to play around with to boot. It’s available at a fair price too, so if you want to nab yourself a bargain be sure to head over to BLEASS’ website to check it out.