Arturia FX Collection 3 review: The last effects plug-in collection you will ever buy?

This bundle of impressive software aims to supercharge your mixes with its haul of top-flight vintage and contemporary effects processors. 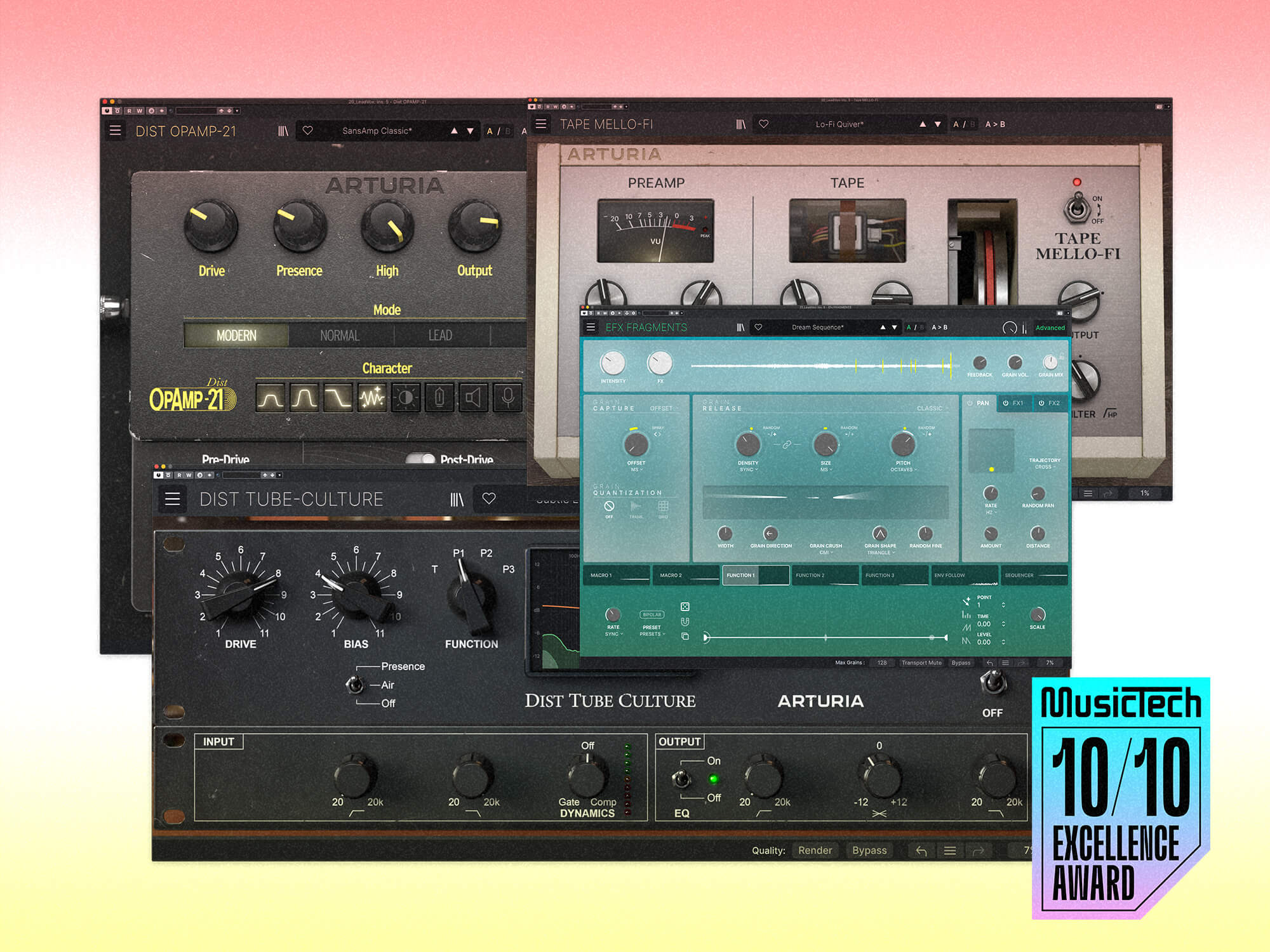 ⊖ Where’s the kitchen sink? Because it’s got everything else!

The third iteration of the FX Collection features all the plug-ins found in the previous version – now updated for improved efficiency and performance – plus four all-new processors. We reviewed FX Collection 2 in 2021, so this time around we’re focusing solely on the new additions.

FX Collection has always contained a superb choice of preamps, all capable of injecting a soupçon of analogue-style warmth and dirt into your sounds. But plug-ins whose only purpose is to saturate and distort have always been absent from the lineup. The updated collection sees Arturia address this deficit, with all the new plug-ins intent on wrangling your audio in some way or another.

The Dist TUBE-CULTURE plug-in is based on Thermionic’s 1998 classic Culture Vulture, and is a valve distortion tour de force, as happy wrapping your audio in a warm fuzzy blanket as pummelling it into a thunderous mass of pure rage.

As with the original hardware, Dist TUBE-CULTURE can switch between distortion types. T emulates a triode valve that introduces even-numbered harmonics for very musically sympathetic warming and harmonics. In P1 mode, the (virtual) valve operates as a pentode, bringing much harsher-sounding odd-numbered harmonics that add a more aggressive edge to your sound. P2 mode takes things up another notch, subjecting your audio to a no-holds-barred beating when cranked hard.

While this is as far as things go with the original Culture Vulture, Arturia has added a further super-aggressive P3 mode for those who really want to show their audio some hatred. So intense is this distortion that it strays into pure rectifier territory, with all of the associated dynamic crushing and compression. A further Arturia enhancement can be seen in the two filter curves – the original had only one – which can be used to boost the presence or air of the sound.

In addition – and in keeping with the majority of plug-ins in the collection – Arturia has included an Advanced mode that enables modern features not found on the original hardware. In the case of TUBE-CULTURE, this adds high- and low-pass filters and a gate on the input, and a three-band EQ on the output. It also changes the traditional needle-style meter into a modern graphical one that provides a clearer visualisation of what’s going on. 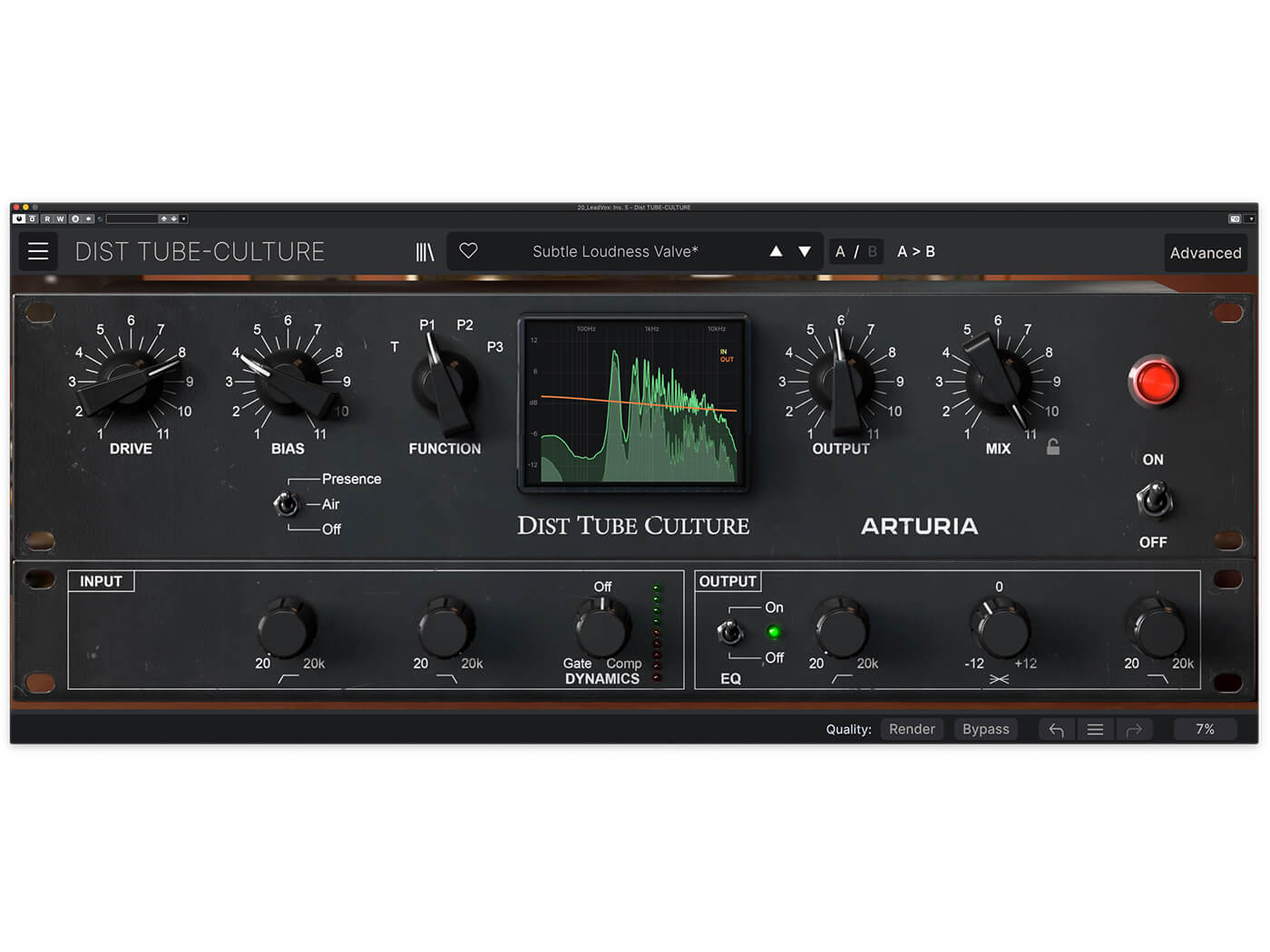 The next newbie in the collection is Dist OPAMP-21, based on the Tech-21 NYC SansAmp. The flexibility and sonic character of the SansAmp, the original amp- and speaker-simulator stompbox, has long ensured that its popularity extends beyond the cohort of six-string plank-spankers for whom it was designed.

Arturia’s take on this 1990s classic allows you to choose from four flavours of the hardware. There are original and modern versions, plus editions released especially for bass and lead sounds. And in place of SansAmp’s awkward little DIP-switches, OPAMP-21 boasts chunky push buttons to switch its various filters and modes (mid boosts, clean/distorted, low-end drive, etc). Enabling the plug-in’s Advanced mode adds pre-drive high- and low-pass filters and a three-band post-drive EQ.

Both distortion generators sound rich, dirty and authentic – you’d be hard-pressed to tell that you’re listening to digitally emulated analogue distortion. This realism comes courtesy of Arturia’s oversampling technology on both plug-ins. The resulting hit on CPU can be managed thanks to a choice between an efficient Studio mode and a high-quality Render mode. 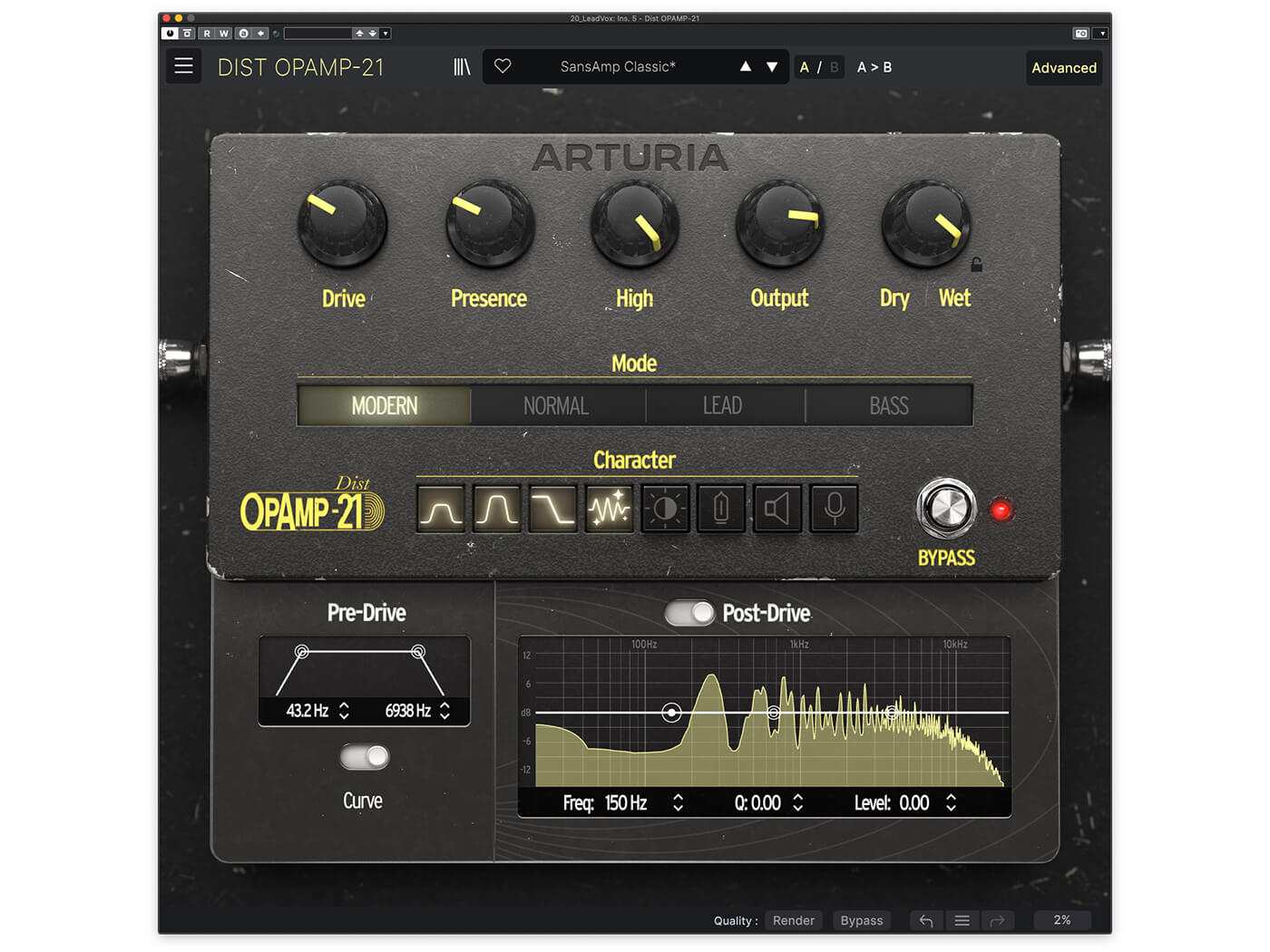 Tape MELLO-FI is a tape emulator based on the circuit models Arturia developed for its Mellotron V synth, and can bring all the lo-fi imperfection and instant nostalgia of tape to even the most modern-sounding music.

A variable amount of preamp drive can be used to dial in classic tape saturation effects – especially useful on drums and basses – and there’s a tone control that interacts subtly with the saturation to create a convincingly tape-like high-end roll-off through to upper-mid boost.

The stability of the (virtual) mechanical elements of the tape machine can be meddled with too, from a so-subtle-it’s-barely-there wow and flutter to a sound-mangling mess of irregular motors, dirty and worn heads, and even mechanical noises from the machine itself.

Perhaps the most fun part of MELLO-FI is the exposed tape motor flywheel. Clicking this causes the motor to slow to a halt over a determinable time period. You can then choose whether playback resumes instantly when the flywheel is released or whether it fast-forwards to catch back up with the play position. 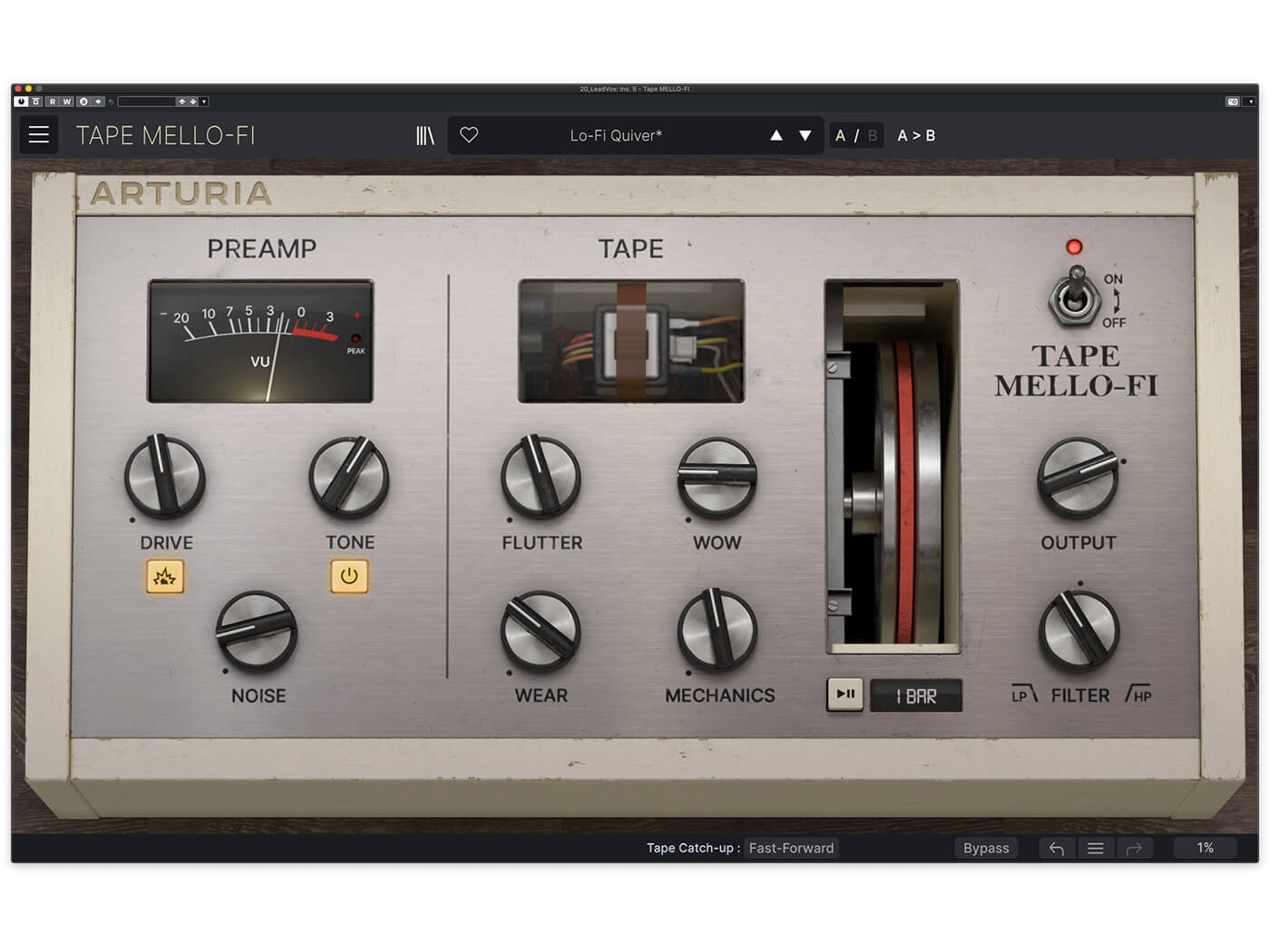 The final addition to the FX Collection is an Arturia original: the mind-bending Efx FRAGMENTS. Using granular processing techniques, FRAGMENTS samples grains from the incoming audio and then re-emits these to create all manner of rhythmic, otherworldly effects.

The bulk of the processor is geared towards modulating and messing with the grains in some way – controlling their timing and length, shifting their pitch, and altering their position. None of these adjustments need be static either, as the plug-in includes modulation sources that sync to your DAW’s timeline: two macro controllers, three repeating curves, an envelope follower, and a step sequencer. This means there’s a huge depth of sonic possibilities to explore, from ethereal, sparkling delays and mad modulations to infectious rhythmic effects and unhinged distortions. 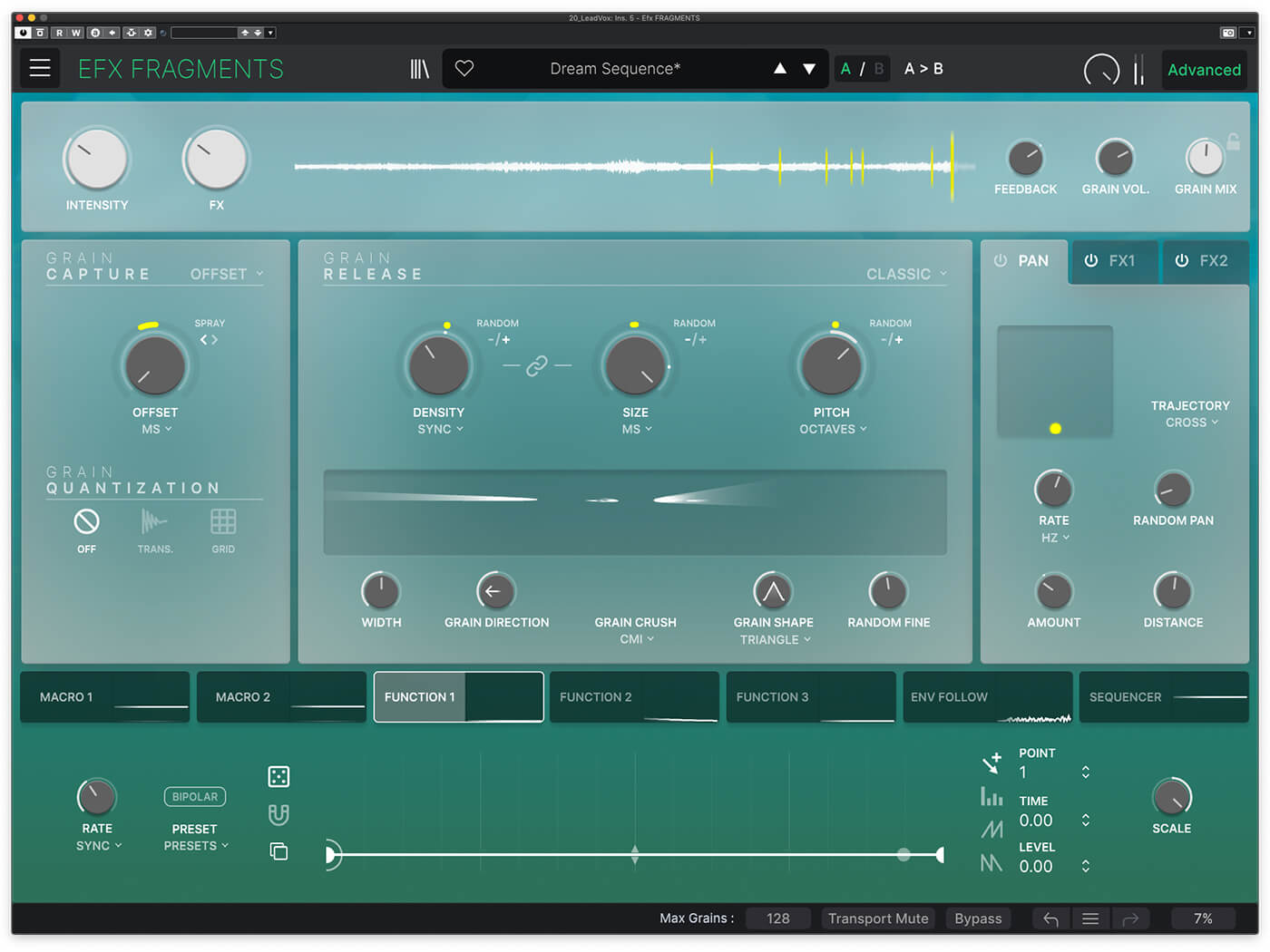 The new additions to the Arturia FX Collection are well judged, and fill the small gaps in the bundle’s past functionality. As such, they enhance what was already an impressive and wide-ranging suite of plug-ins, and add that much more value to an exceptionally attractive asking price. Best of all, the FX Collection covers so many bases and eras that it could provide all the plug-ins you’ll ever need.