Like a swan gliding across a choppy lake, Sculpt works hard under the surface to make sure your feathers aren’t ruffled by even the biggest dynamic ripples. 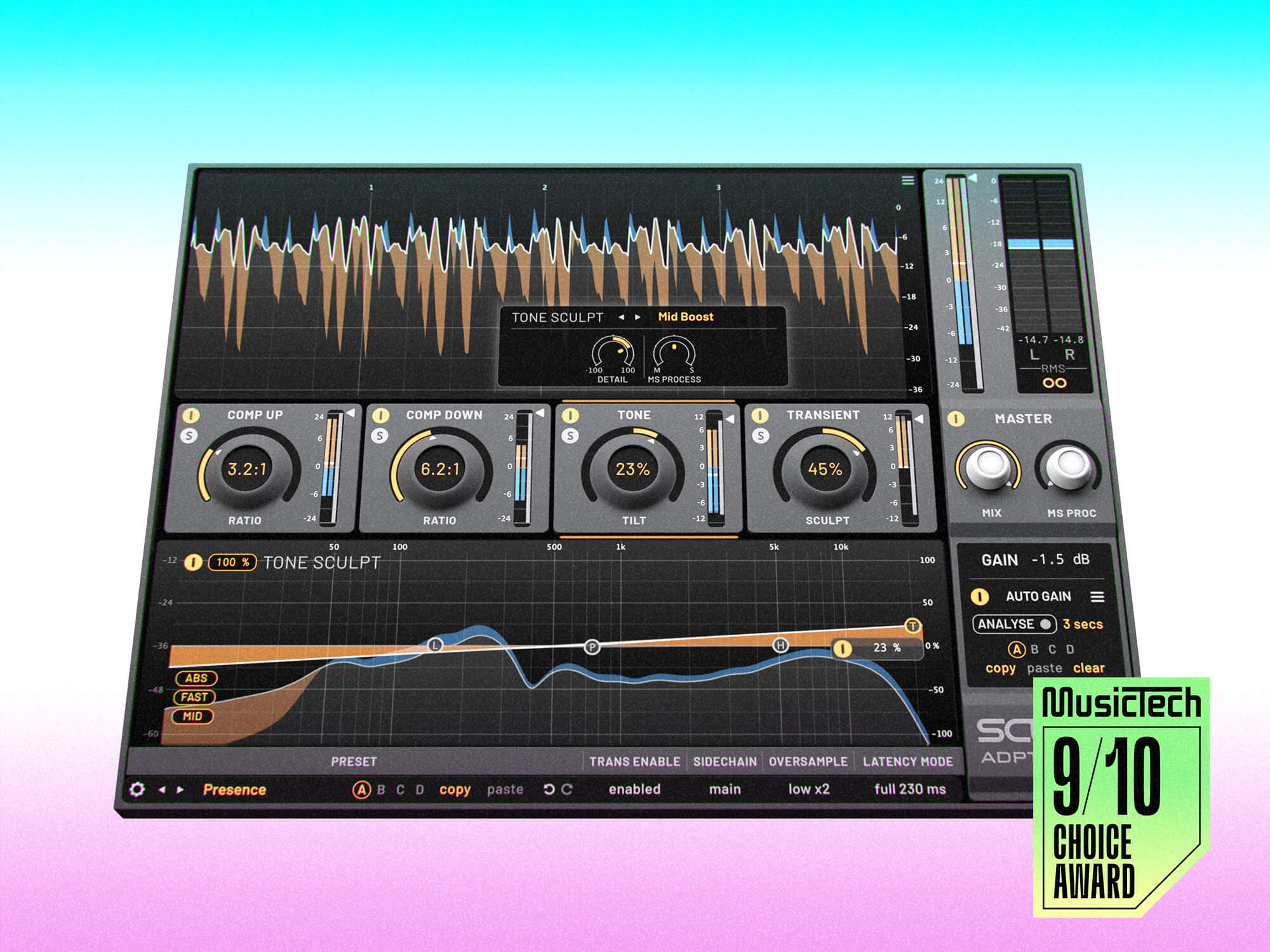 Sculpt, the new plug-in from ADPTR Audio, combines a set of four versatile processors into a plug-in that delivers exceptional control over your audio’s dynamics. The effect can be used on individual parts and tracks but this isn’t its forte: it’s a resource-intensive plug-in, so running numerous instances will be difficult, and its need for a relatively long look-ahead means it’s no good on live inputs. However, Sculpt is superb when used in its intended role as a stem, mix and mastering processor.

The situation is reversed in the second compressor/expander. In compressor mode, the module acts as a conventional downward compressor, but in expansion mode it operates as an upward expander – in other words, it increases the gain of signals that rise above the threshold.

This pairing of processors – compression and expansion, upwards and downwards – provides a phenomenal depth of control over your audio’s dynamics and makes Sculpt exceptionally versatile.

The compressor/expanders feature a few uncommon parameters aimed at creating more natural-sounding compression. The most notable, Bound, allows the ratio to be reduced further beyond the threshold the signal goes. This means you can create an amplitude band where full-ratio compression or expansion is applied, yet reduce that ratio for particularly loud (or quiet) passages, thereby retaining some natural dynamic variance.

Each compressor/expander sports its own independent sidechain EQ, allowing you to tune the processor’s response at different frequencies. The EQ has low- and high-shelf bands, a peak band and a tilt band that pivots at 500Hz.

Unlike a conventional EQ, which applies a blanket cut or boost irrespective of the signal, Sculpt monitors the input for the presence of frequencies that fall within an EQ band’s range of influence, and then pushes these frequencies towards the EQ curve that you have defined. This makes it much easier to get a consistent frequency response from the modules when using the same Sculpt settings to process different audio sources.

Sculpt’s third processing stage, Tone, uses this EQ system and allows you to make broad-brushed tonal changes to your audio before it’s fed into Sculpt’s final module, a transient-shaper. With this, you can make transients in the audio more or less prominent, and use Sculpt’s EQ system to modify the shaper’s sensitivity to frequencies.

So, for example, you could take the edge off an over-hot hi-hat without impacting the punch of the snare, or add aggression to a lacklustre low end without creating harshness further up the spectrum.

Finally, all modules include an MS Process parameter that biases the module’s effect between the mid and side components of the audio. In its central position, both mid and side will receive 100 per cent of the effect. Turning towards mid will reduce the percentage applied to the side component, and vice versa. It’s a slightly confusing arrangement but it allows you to modify Sculpt’s stereo response in interesting and useful ways.

ADPTR has done an excellent job with Sculpt’s interface design and usability. The processing modules are laid out as blocks across the middle of the window, with each exposing their most important parameter for control with a large, quick-access knob on the panel.

Above this is an amplitude graph that displays the signal level in real time with gain increase and reduction shown as shaded fills in the peaks and troughs of the graph – brown for increase, blue for reduction.

When a compressor/expander module is selected for editing, a dynamic response curve graph is added to the upper view. A brilliant visualisation of the module’s settings and how it’s operating, it aligns perfectly with the amplitude graph; there’s even a line that rides on the dynamic response graph’s curve to indicate the current dynamic range.

Running below the row of processing modules is a real-time spectrum analyser. As with the amplitude graph, gain changes are indicated on the spectrum readout. But here we’re given a frequency-specific view of what Sculpt is doing. The curves of the sidechain EQs and Tone processor and the Transient module’s frequency-response curve are shown and edited as overlays on this spectrum view.

These graphic visualisations make it easy to see exactly what Sculpt is doing. But there’s an issue: each module has additional controls that appear on an overlay when the module is selected. That overlay is drawn above the row of modules, and so partially obscures the amplitude and compression graphs. ADPTR is aware of the issue and is considering solutions.

Each module has a gain change meter. There’s a master gain change meter, and the main output level meter also incorporates gain change indicators. Furthermore, the module and master meters have a vertical marker running alongside them that, when dragged, scales the amount of gain change applied by the module or by Sculpt as a whole.

Sculpt also boasts a clever Autogain feature, which analyses a portion of your audio, from which it calculates the ideal input and output gain. This pays dividends when using presets because the gain data is included with a preset; when recalled for use on different material, Sculpt will attempt to match the gain of that new audio to the profile stored in the preset, so that Sculpt’s modules respond similarly to the new material as they did to the material used when the preset was created. This makes presets more useful than they normally are with dynamics processors.

Sculpt is one of the most flexible dynamics processors we’ve seen. Its ability to create complex dynamic responses and to hone them to specific frequency and amplitude ranges make it a must-have for mastering engineers, and it’s exceptionally useful during mixing too.