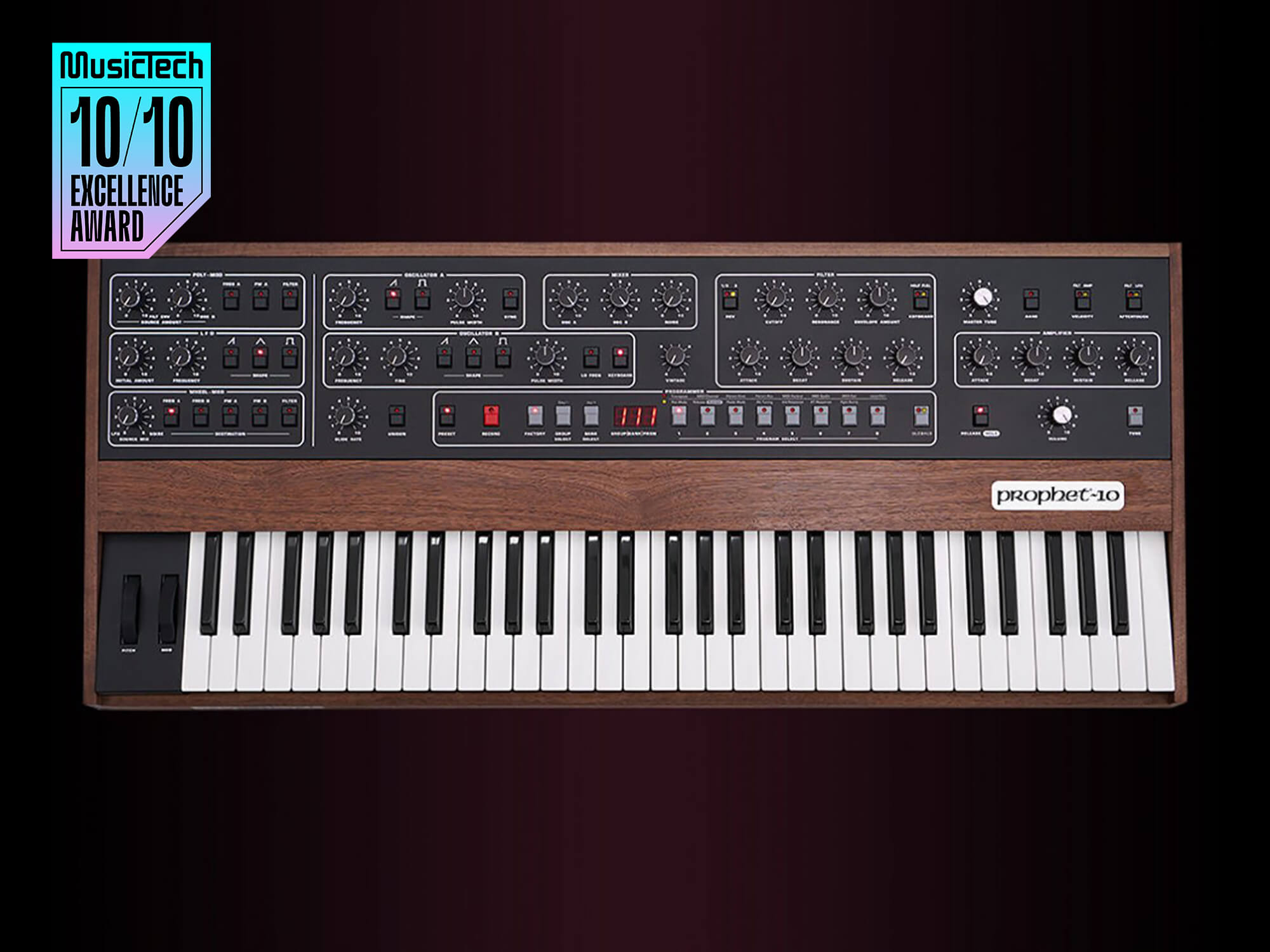 ⊖ Class like this doesn’t come cheap
⊖ It’s mono, which makes sense when you look at the features

As a reviewer, it’s all too easy to use words like ‘legendary’ or ‘classic’ when it comes to some synthesizers. Both terms are overused, so what criteria warrant such labels? First, they need to have been pioneering at the time of release, with a radical, inspiring and musical feature set. They need to have demonstrated this in theory and practice, shaping the sound of countless records across multiple musical genres.

More than anything else, a ‘legendary’ synth needs to have a sound so iconic that if its creator deems it time to issue a new version as an upgrade to the original, this doesn’t seek to reinvent the wheel but rather to stick to the original blueprint. If it ain’t broke, don’t fix it. Enter the new Prophet-5 and 10, the fourth revision of Sequential’s legendary polysynth, first released over 40 years ago. Are all criteria met? 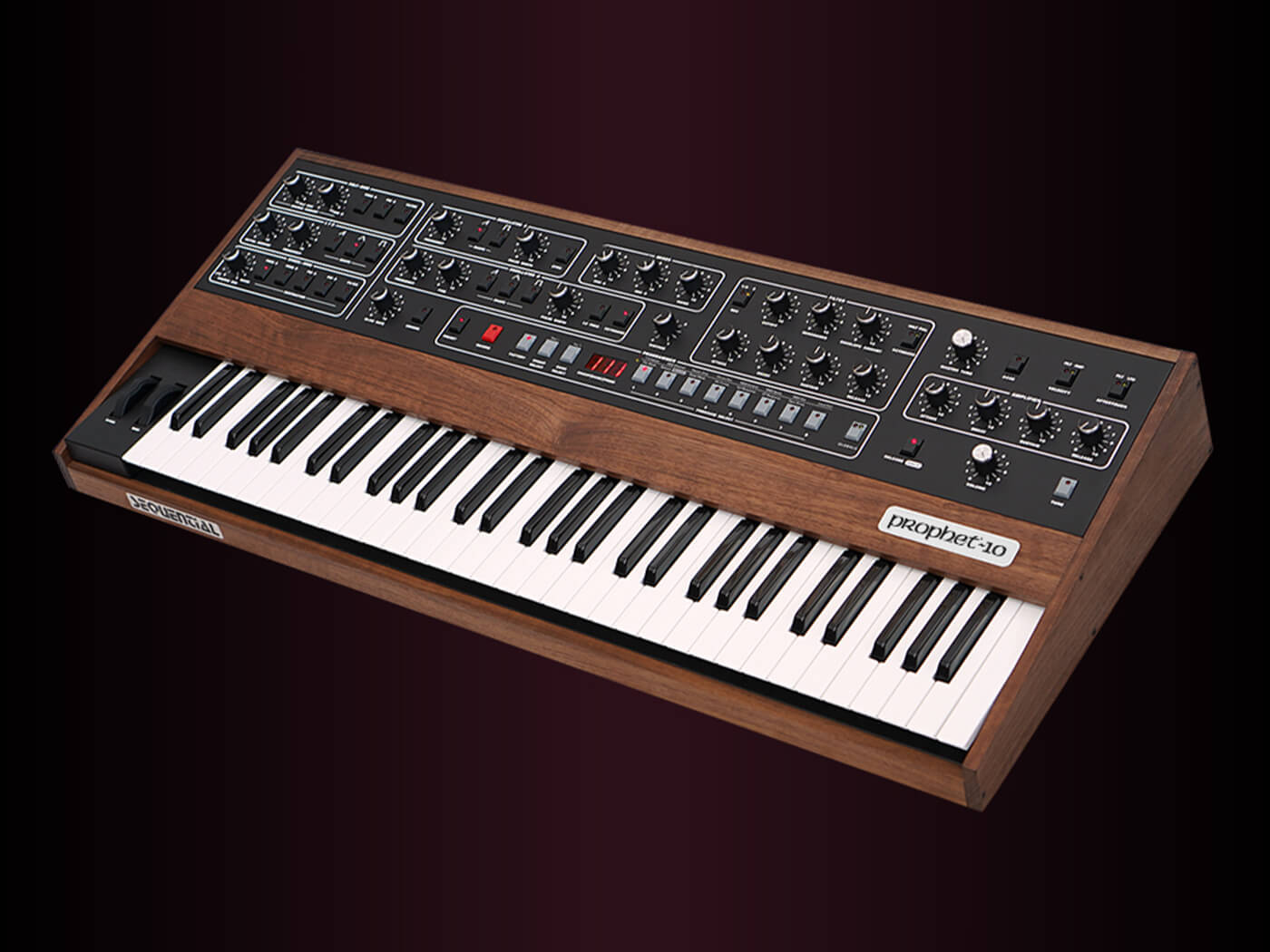 The Prophet-10 on test is the fourth revision of the instrument. Sequential Circuits released the original Rev1 Prophet-5 in 1978, designed by Dave Smith and John Bowen. It was the first commercially available synthesizer to use microprocessors and to offer full programmability. After a small initial run of instruments, the Rev2 appeared, the first to be mass-produced. A third revision followed, which replaced the original’s Solid State Music (SSM) chipset, relying on Curtis Electromusic Specialties (CEM) chips as a replacement. This changed the character of the Prophet-5, producing a more stable synth but, some argue, a slightly less inviting, warm tone.

The Prophet-10 arrived in 1981 and boasted 20 oscillators and a double-manual keyboard. A glance at the new Rev4 Prophet-5 and 10 shows that the classic Prophet-5 design is now being adopted by both new instruments (no more dual manuals), with a familiar styling and parameter layout.

There are two oscillators per voice, with Oscillators A and B both offering sawtooth and variable-width pulse waves, and Oscillator B also providing a triangle wave. Oscillator A can be hard-synced to Oscillator B. At the same time, you can switch oscillator B to become a low-frequency modulation source if you prefer, with an option to decouple it from pitch input variation from the Keyboard, for use as a fixed-frequency modulator, for instance.

The Mixer section blends the volume of the oscillators and a separate white noise generator before the summed signal passes to the Filter section. The Rev4 offers its first new trick here, providing a toggle switch to move between the Filter behaviour of Rev1/2 or Rev 3 versions of the Prophet. This pairs nicely with another new feature, a Vintage dial, which progressively moves between the super-stable tuning of the Rev4’s oscillators to the increasingly unpredictable pitch-tracking of Revs 3, 2 and 1. The design masterstroke is that the Vintage function is a dial rather than a switch, allowing you to find sweet spots between revisions.

Filter and Amp Envelope functions are familiar, but new Velocity and Aftertouch buttons route between Filter/Amp (Velocity) and Filter/LFO (Aftertouch). These buttons can affect both options simultaneously, just one, or neither and their inclusion – a first for the Prophet 5/10 – significantly increase playability.

The most 21st-century additions appear on the rear panel, with USB connectivity for software updates and MIDI I/O as an alternative to the 5-pin MIDI ports (also provided). CV and Gate In and Out make the Prophet a perfect front end to a modular synth system.

The only eyebrow-raiser comes at the output stage; the main audio output – faithful to the original – is mono only. As the Prophet signal path remains free from internal effects, this is not nearly as radical as it seems at first, but it’s a bit of a surprise given the number of voices.

Modulation and an eye on the future

The Prophet 5’s modulation options were powerful back in 1978, and they remain so now. For example, you can blend LFO and noise generators as modulation sources and apply them to a sound.

Potential modulation targets include the frequency and pulse width of Oscillators A and B and filter cutoff frequency. The result can range from subtle vibrato to sonic mayhem, and things get even more interesting when you introduce Poly(phonic) Mod(ulation). 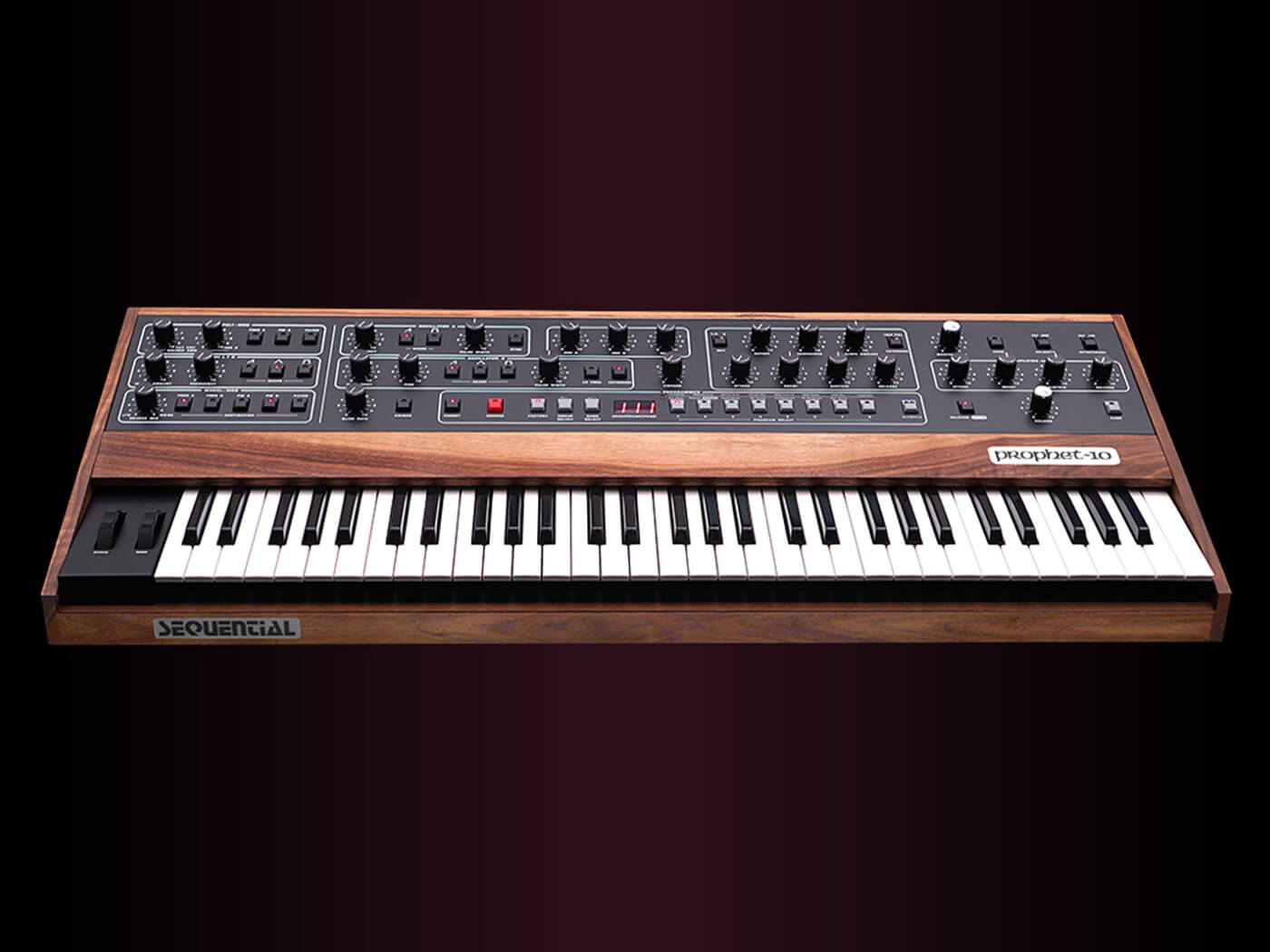 The manual explains it best; switch Oscillator B into ‘Low Frequency’ mode and you effectively create five voices to act as independent LFOs to be applied to the notes you play. If keyboard tracking is then set to Half or Full, each of these LFO modulation sources will feature its own, different frequency. Of course, you can use the power of Oscillator B in all kinds of ways and, again, as the dial to choose between this and Filter Envelope as the modulation source is a rotary dial, all kinds of interplay can be created. All of this would be powerful enough but it’s clear that Sequential has no intention to rest on the laurels of what is already a powerful feature set.

On September 7, Sequential updated the synth’s architecture to add Stack and Split modes, and released an optional voice expansion card for the Prophet 5. Stack and Split bring bi-timbral operation, allowing you to either layer two sound programs, or split the keyboard between them instead. The Prophet-10 then allocates five voices to each sound, making it an even more powerful performance instrument, allowing for bass and pad sounds to be played together, for example.

In Stack mode, the opportunities to create richer, blended sounds at source is irresistible. The optional voice expansion card for the Prophet-5 ($899) is user-installable and expands polyphony to 10 voices, allowing a Prophet-5 to benefit from the new operating system. 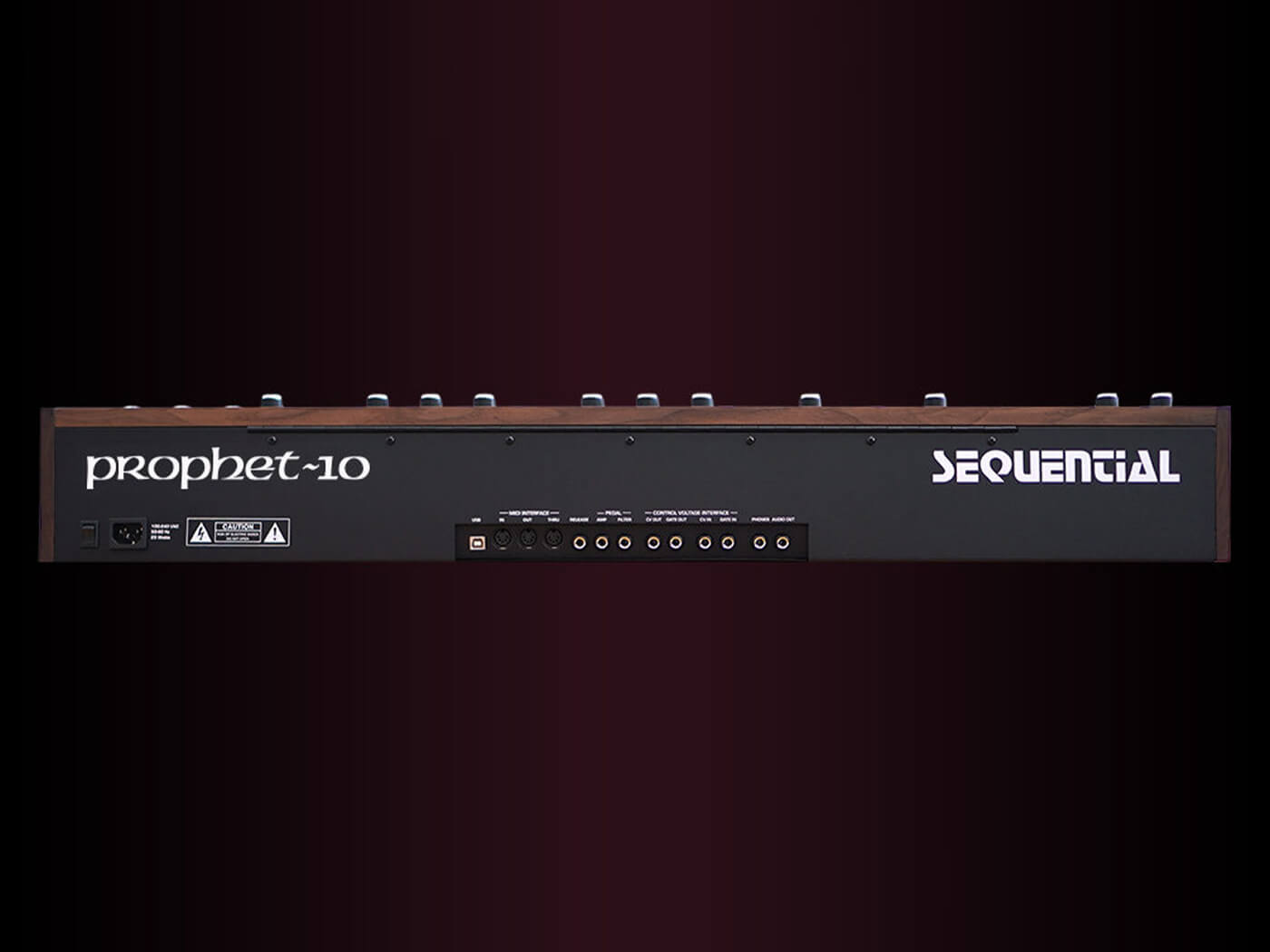 The Prophet-10 is an absolute joy. It sounds warm, fat, lush but, above all, effortlessly fantastic. Think about so many of the tricks synths rely on to capture your interest, whether it’s a slew of onboard effects or multiple synthesis personality types. The Rev4 Prophet is the opposite; it’s like climbing into a classic car which has made a couple of small concessions to the modern nature of driving. As a result, the Prophet-10 fits effortlessly into a modern music workflow without compromising the essence of what it is: a true classic. To play one is to want one.