Korg now has an analogue synth for every occasion. It’s time to meet the Minilogue XD, with even more sound design appeal, but still at a very keen price point. 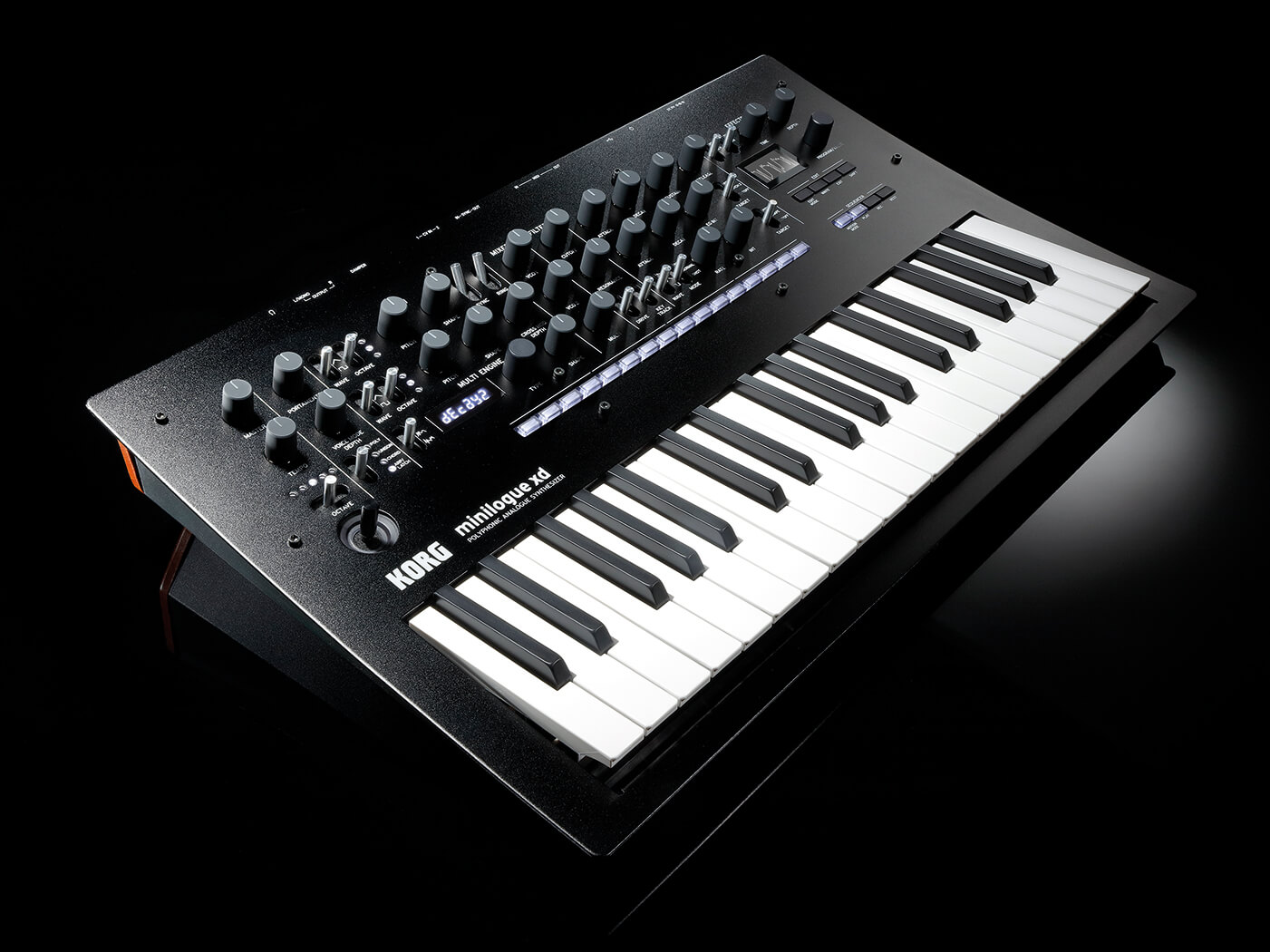 Anyone with any passing interest in the synthesizer will have noticed not one, but three trends over the last decade. The first is a return to analogue, the second a return to modular synthesis, and the third is an often dramatic lowering of price.

You can now get a phenomenal number of astounding synths – many of them ‘proper’ analogues – for an easy three digits. If you are as old as me, you’ll remember a time before when this was unthinkable. In fact, the whole idea of a return to analogue was unthinkable. “It would simply cost too much to (re) manufacture all of those analogue components,” they used to say, “and because everyone uses software, why would anyone be interested?”

Well, it turned out that analogue components could be cheap, and not everyone was interested in software (and if they were, they were also interested in hardware). So here we are in 2019, using a whole bunch of synths we never thought we’d ever see the like of again.

Which is brilliant, of course, especially given the price, and Korg was right at the heart of things when this revival started. And well into that revival, the original Minilogue was and is a true gem, lighting up the poly-synth world with its big sound and small price tag. “A pretty wonderful product, full of great analogue character, and nothing short of a joy to use,” we said.

So now we have a new Minilogue, the XD, so what has Korg added to this analogue poly synth, this jewel in the revival of analogue? Well, some digital stuff, actually…

Minilogue XD is a souped-up Minilogue, as that synth remains at its core – hence the name – although it should also be considered as a cut-down Korg Prologue, too, as it features many of that synth’s extras and flavours. In fact, you could easily call it a Prologue-lite in some regards, with its four voices of polyphony compared to Prologue’s eight or 16. Either way, it’s clearly designed as a stepping stone between the mini and pro.

The beating heart is very much a couple of analogue VCOs per voice – each with shapable sawtooth, triangle and square waveforms – but XD also has the digital Multi Engine also found on Prologue, and that acts like a third oscillator. With that come three more types of sound generator – noise, VPM (Variable Phase Modulation) and a user oscillator slot which lets you add your own oscillator type in one of 16 available slots.

These new elements obviously bring some very different sounds to the party. Noise features (pretty obviously) four different types of noise, invaluable to percussive sounds and livening up other audio with subtle sweeping or thickening. The VPM oscillator brings FM oscillation to Minilogue, so expect some more edgy metallic and fast attack sounds, and there are 16 different oscillators to choose from.

The user section is perhaps the most interesting in that it is very much what you make it, or rather, perhaps, what other people make it. It’s an open-source area for people to create their own oscillator types to fill the 16 slots, although you get a morphing Wavetable oscillator thrown in as a starter.

Used alongside Minilogue’s analogue engine, Korg sees this Multi Engine appealing to sound designers who want to mix, match and create between various sonic worlds, all in one compact hybrid-like machine. And on the face of it, it’s a tempting proposition, especially to anyone who was attracted to Prologue in this regard but couldn’t stretch to its four-figure asking price. But before we get too carried away, let’s have a quick recap on the original Minilogue and see how else it differs from the new XD. It’s not just the engine, as there’s been some other tinkering around the rest of the chassis.

Compare the analogue specs of Minilogue XD and Minilogue side by side and they
are pretty similar. The VCOs are identical, so the big sound of the original has its core components and the rest of the features are either there or slightly tweaked to allow the extra feature integration. So the original had a noise source and also a sub oscillator, but both of these features can be introduced via that new Multi Engine.

Taking a look around the new effects and you get 27 presets based around four modulation effects (Chorus, Ensemble, Phaser and Flanger) plus eight user; there are 20 delays and 18 reverb effects (including eight user each). Connections-wise, there are additional CV ins on the XD. You also get additional presets (500 in total including 300 user). There’s also an extra 7 segment x 6 digit LED display on Minilogue XD to cater for the new Multi Engine, plus a spring-loaded joystick that, as well as being used for pitch-bend, can also morph between assignable parameters – very welcome and not found on either the original Mini- or Prologue.

Size and weight-wise, the two Minilogues are identical; plus, you may well find they’re slightly deeper than you might expect and perhaps lighter. With its wooden back panel and angled metal top, XD is certainly as beautiful as the original, and a very inviting synth – you just want to get in there and tweak.

Without wishing to over-compare, I should also bring in the Prologue at this point. As well as the extra polyphony options, it too has the extra screen and one or two extras, including a full-sized pro keyboard. The three-octave mini keys on Minilogue XD are the same as those on Minilogue and so might split opinion. Personally, and as someone who has
been reviewing perhaps too many touch keyboards recently, they’re very welcome. Anyway, enough comparisons, time to hear XD on its own merits.

Perhaps the best way to assess the impact of the additional effects and Multi Engine is to simply take a stroll through the sounds. First up, it’s important to stress that even though I’ve included a very hybrid-like synth Roland synth as an alternative, Minilogue XD isn’t the kind of synth that is full-fat analogue one minute and then playing prancing digital FM bells the next. The mixture of its Multi Engine with those fat oscillators is very much more subtle, yet still actually incredibly powerful on a sonic level.

First impressions are that XD sounds as analogue as ever, with huge bass cone-rattling swells and drones and sharp and precise leads. I love the way everything is so easily implemented – the Multi Engine screen displays what engine is being used and you can easily flick between the three options, as you can the three analogue waves. I often found the Mixer section was my first port of call to actually boost the Multi Engine to hear its effects on more subtle sounds – ah yes, a touch of noise here, a slight metallic overtone there, but nothing jarring, and all expertly blended.

Here’s a couple of great fun things to try as you step through the sounds in your local dealer: for instant sound design, go through as many of the waveforms in the VPM mode as possible and adjust the Shape dial. (Note the effect particularly of FAT2 – just make sure you use headphones at a low level!)

Also, that little joystick is a revelation. Use it for pitch and modulation, but so often just tweaking it up- or downwards brings in real sonic drama – a filter sweep being the most common and obvious. I’d have liked it to be linked to the ‘oscilloscope screen’, that popular main screen of Minilogue and Prologue that shows the sound wave change as you alter parameters in real time. This screen reveals parameters like effect types, bpm and tuning, and it would have been cool to show whatever parameter the joystick was linked to as you tweak it.

The aforementioned effects section is well implemented, too. Just select from the Modulation, Reverb or Delay options and then use two levers to select your type and the dials to the right define its impact.

Yes, I realise I’ve been distracted from talking about the sounds – a great synth will always takes you off away from your chosen course into all sorts of other distracting areas and Minilogue XD is so hands on and inviting, you just can’t help it. In summary, it’s analogue Jim, but with a lovely edge and attitude.

My attention span is quickly judged (and fails again) with the sequencer. With a different sequence programmed per preset, this has you leaving the synth to play on its own while you explore the hands-on options again. All of those options in Multi Engine get the ‘twice over’, and you find yourself flicking between the options in the Envelope and LFO sections to really begin to learn how the core ingredients of every section shape the sound.

One final mention should go to the Voice Mode options here, as stepping through the Poly, Unison, Chord and Arp options as a sequence flows really lets you get your head around what each means – go Unison! The sequencer is also easy to program – step recording enters a selected note into a desired step while real-time recording lets you play away. Hit the Motion button here to record up to four other parameters.

It’s all-too-easy (as I’ve shown here) to get carried away with comparing and contrasting XD with its siblings, rather than appreciating it alone. Of course, it has some excellent features that are shared with these, but do try and enjoy it on its own, as it stands out in a competitive area as a synth which is both big in sound and flexible. As I hope I have also shown, this is best demoed when getting hands-on with it in full-flight and in this regard, there are few other synths – expensive, cheap, big or small – that offer as much instant fun, drama, education and attitude.

If you weren’t tempted to get a Minilogue first time around, I’d be surprised if XD doesn’t tip you over the edge – it now has a wider sonic brief with more potential. You might prefer the pure analogue sound of the original, in which case it can now be picked up for around £430. But paying the extra for XD increases your sonic options and adds other bits, so is well worth it. 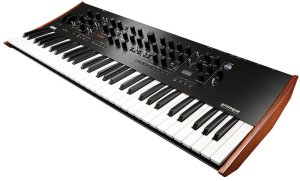 You have to compare XD to its family, although not perhaps as much as I have. Here, it’s a case of choosing your polyphony and asking yourself whether you need the extras afforded by the Multi Engine found on XD and Pro.

The JDXi boasts digital and analogue sensibilities for much less cash than before. You get proper digital here, with Roland’s SuperNATURAL sounds, and you can also pick the synth up with one finger!