A six-voice analogue synthesiser with a distinct design, modulation options aplenty and the promise of the sonic spirit of mythical creatures rising from magical waters. And all for under £500. 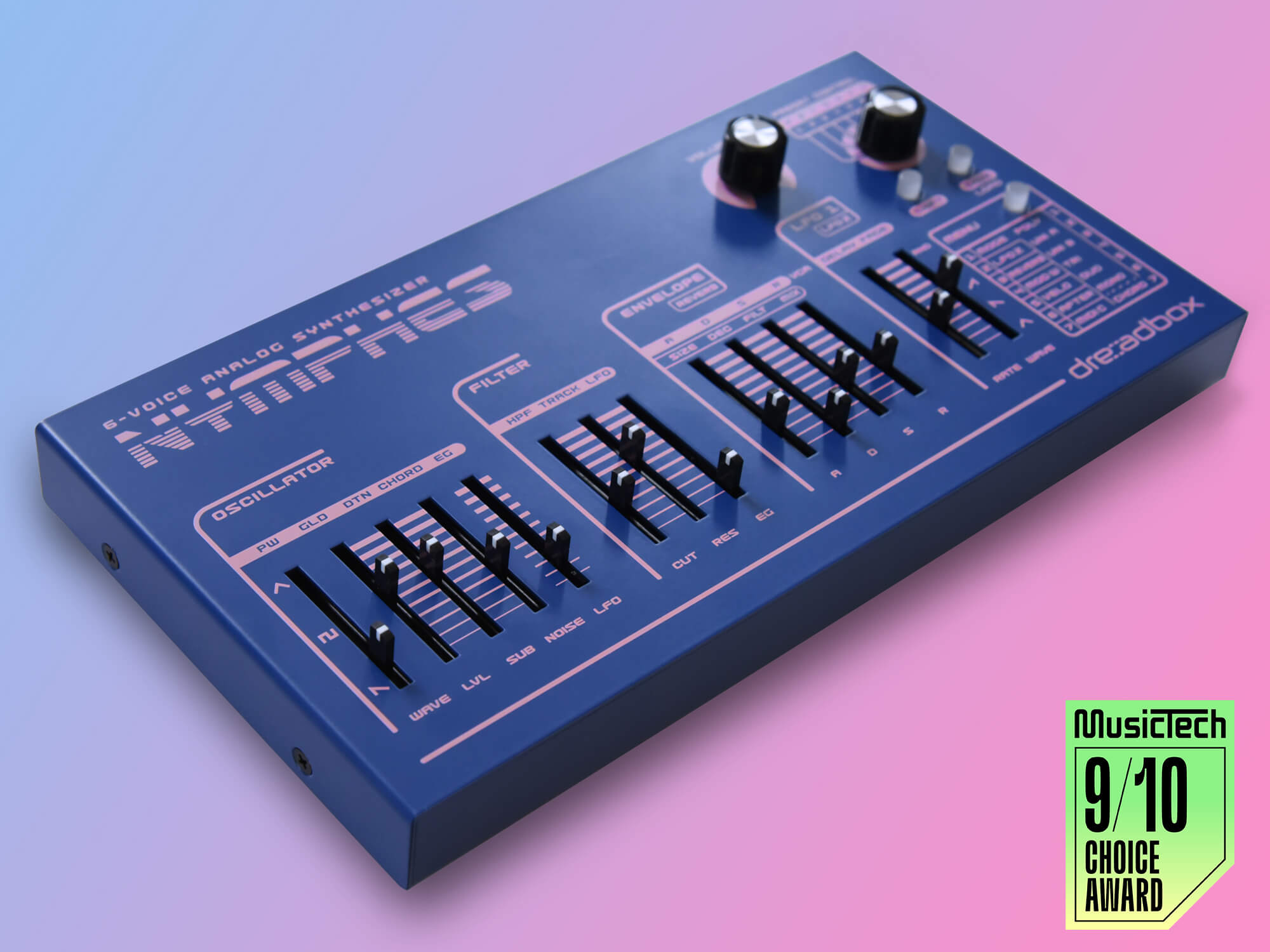 ⊖ Menu system is fiddly and will require time to fully understand
⊖ Some features, like envelope assignments, might seem curiously prioritised


Dreadbox is gaining a reputation for its unique appetite for the leftfield. Its stomp boxes, Hypnosis effects processor and modular components are unashamedly zany, and its latest synth comes in a box that reads: “They come from the springs, they come from groves, they come from the sacred rivers flowing seawards.” Never has Homer’s Odyssey been quoted on a synth to have arrived in our studio before but Nymphes, the six-voice, all-analogue desktop module isn’t like any other synth we’ve played before either.

The core structure of Nymphes can be easily understood by anyone familiar with subtractive synths – with a few caveats. Nymphes offers at least two functions per slider, with the parameters listed across the bottom being the main functions and the secondary set accessed via the Shift button. It’s odd that Dreadbox labelled it this way, as the names of each of the synth’s modules is above. So you’ll have to teach your brain to read from the bottom up, rather than the other way around.

On the left hand side is the oscillator section, featuring saw, square and triangle waves with intermediate positions available via the slider. Next to this is an overall level control for the main waveform, and a sub slider that introduces a lower octave to thicken and fatten sounds. A separate noise generator, which can be used on its own, comes before an LFO section into the oscillator stage. 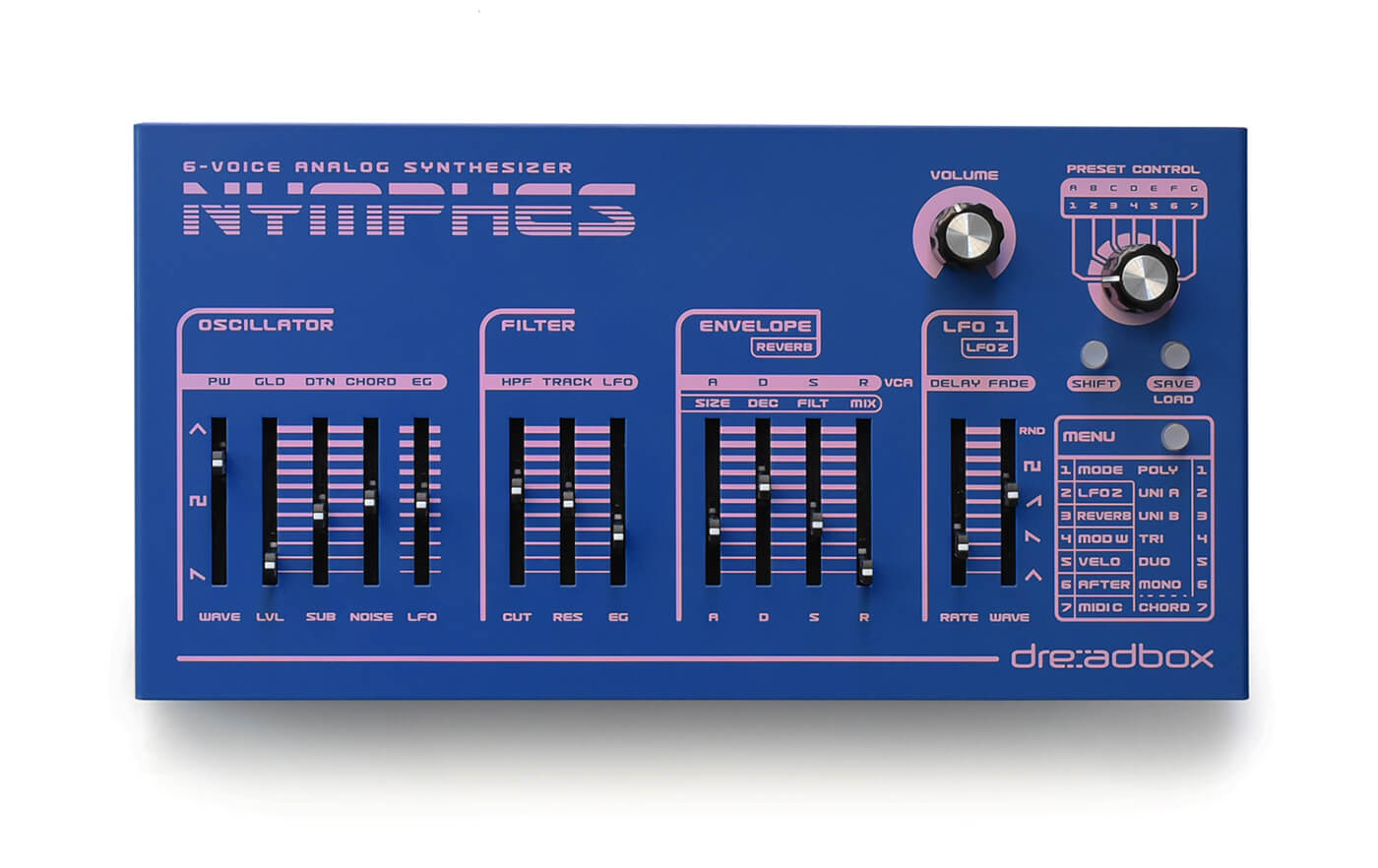 The main filter is a resonant low-pass design, with these two sliders joined by an envelope generator amount controller. This section highlights the most Marmite design decision that Dreadbox has made within Nymphes: the ADSR sliders across the bottom control the filter section’s envelope, rather than that for the amplifier. The latter requires that you use the Shift button to control volume over time. You’ll either love it or hate it but we’d rather reach for an envelope to control volume shape rather than tone, so this feels less intuitive.

LFO1’s controls lie to the right. Its two sliders control rate (speed) and wave shape, with triangle, ramp (up and down), square and random shapes available. Then come the options afforded by the Shift button. You can either click and hold this to temporarily access the second lane of commands or double click it to remain in Shift mode for longer, leaving both hands free to adjust these secondary parameters.

Shift turns the oscillator wave dial into a pulse width control, and provides glide, detune, chord and envelope generator controls for the remaining sliders in this category. The upper pane of options in the filter section offer a Roland Juno-style highpass filter, keyboard tracking and introduction of the LFO to the filter stage.

As previously discussed, Shift controls the amp envelope’s shape, but manipulation of the onboard reverb is achieved via the Menu. The second LFO can be introduced by these secondary commands as well, with delay and fade amounts mapped to the sliders, though implementation of this second LFO also requires the Menu options. 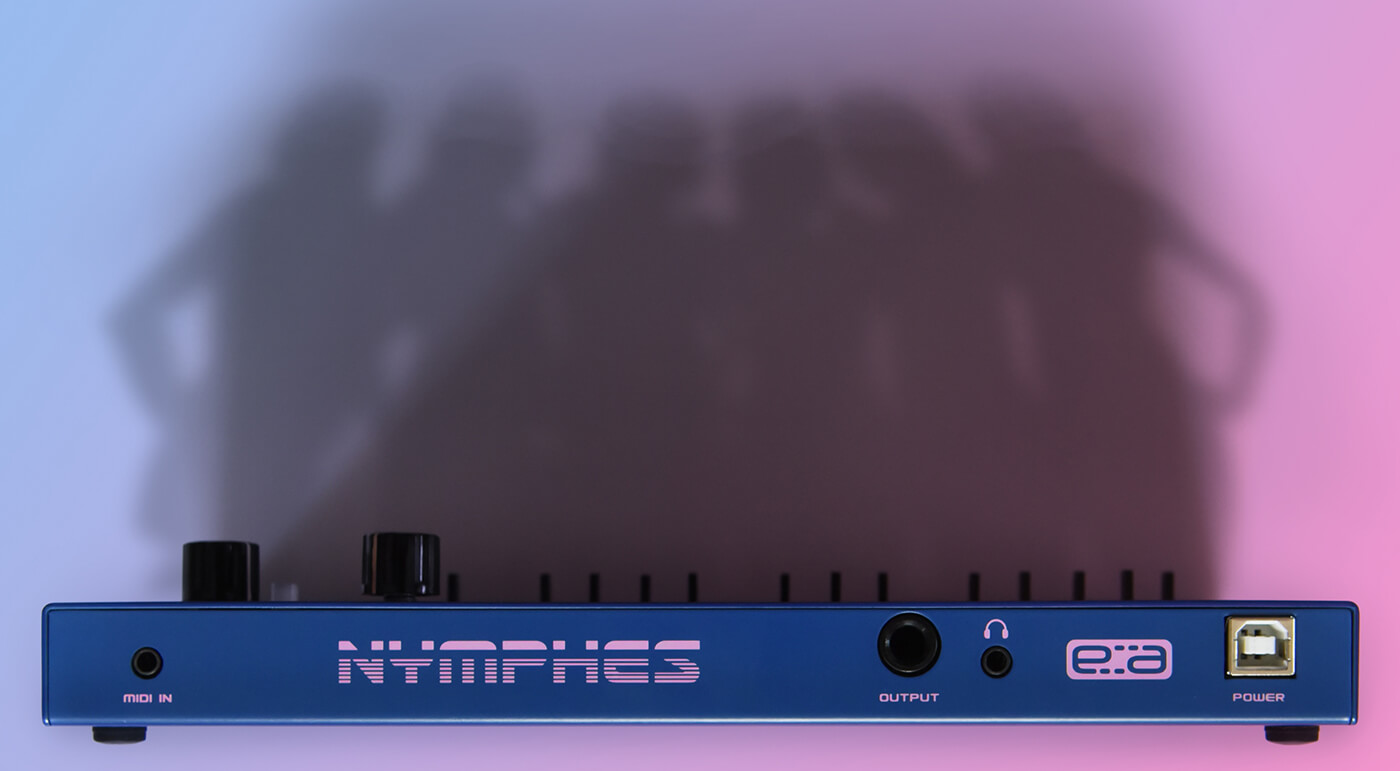 What’s on the menu?

So far, so straightforward – albeit with a couple of eyebrow-raising design decisions. Now come the parts that are unique to Nymphes and which will perhaps take the most getting used to.

In the top right-hand corner is a rotary dial, labelled Preset Control – but this feature does more than select presets. To choose one, first you need to press the Load button, below the rotary. Remember, this is the lower label of this button, with the upper option, Save, the secondary command. By pressing Load, the light flashes and then, by pressing Shift, you can rotate the dial to select a bank from A-G. Then, if you let go of Shift, you can use the same rotary to select one of the seven sounds within that bank.

Now you need to be careful. To select a User sound that you’ve made and saved previously, press the Load button quickly and one of those 49 locations will be recalled. To select one of the factory presets, hold the Load button for longer instead. Got it? No? Well, it took us a while too. Once you’ve learned the system, it works fine. But it won’t be committed to muscle-memory overnight.

The rotary in the top right hand corner is also how you can access the extensive Menu options. Here’s an example: If you want to change the reverb controls, you press Menu and rotate the dial to ‘3’, as per the reverb printed label in the bottom right-hand corner. Now, the four controls in the envelope section – size, decay, filter and mix – control the reverb parameters.

To assign LFO 2, you’d press Menu, turn the dial to ‘2’ and then use the sliders to select destinations and amounts, where appropriate. Mode ‘1’ is Play Mode, where you get to choose whether you overwrite the six-voice polysynth nature of Nymphes in favour of two flavours of Unison, Duo, Mono or Chord modes, the latter of which lets you access the Chord editor, which you can introduce using the slider in the ocillator section. 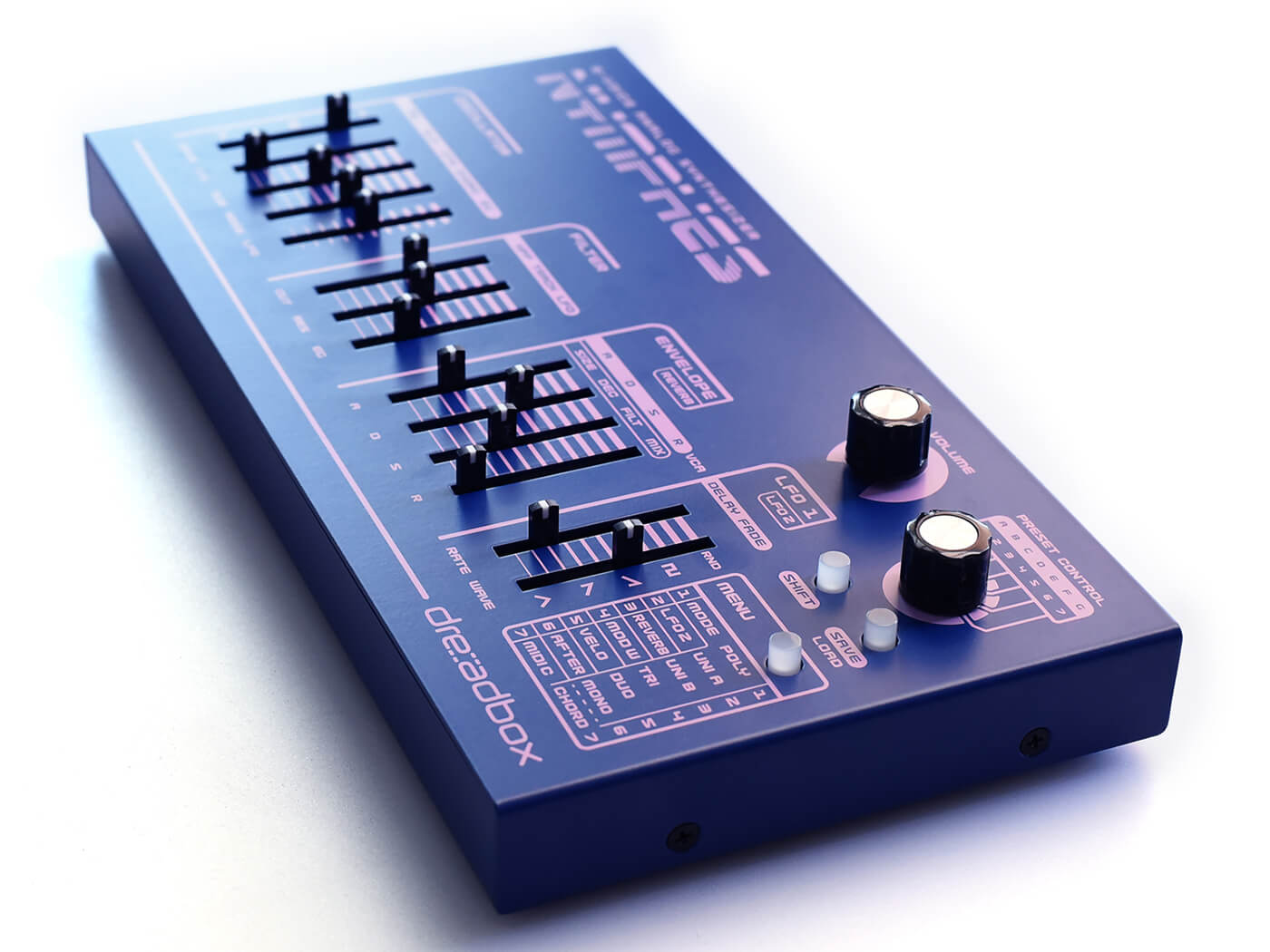 If all of that sounds over-complicated, rest assured that Nymphes’ quirks are overcome in time and, far more importantly, are worth getting past because the sound of this instrument justifies the price of entry.

Nymphes offers multiple sonic personalities, with rasping basses, ethereal pads, spiky, wonky melodies, blunt sounds perfect for sequencing and a host of options for electronic percussion. Its sound is deep, broad and versatile but, just as significantly, it’s not awash with flashy gimmicks trying to impress you.

The digital reverb is brilliantly weird; more like a spring reverb than anything else, with a curiously bloated vibe all of its own. We love it; it’s a unique flavour and if you don’t like it, you’re doubtless going to switch it off and add your hardware or software reverb of choice anyway.

A full MIDI CC map of parameters can be founud in the manual, meaning you could program a control surface to drive Nymphes entirely remotely if you wanted. Either way, this is a six-voice, all-analogue polysynth for under £500.

Take Nymphes’ name and Homer quote with as much of a pinch of salt as you like but be in no doubt that if you’re looking for a compact, self-contained hardware synth with a spirit of its own, Nymphes has plenty to get excited about.