Novation’s latest controller is one of the most compact keyboard and pad controllers designed to work with Ableton Live (and more). Ready for lift off? 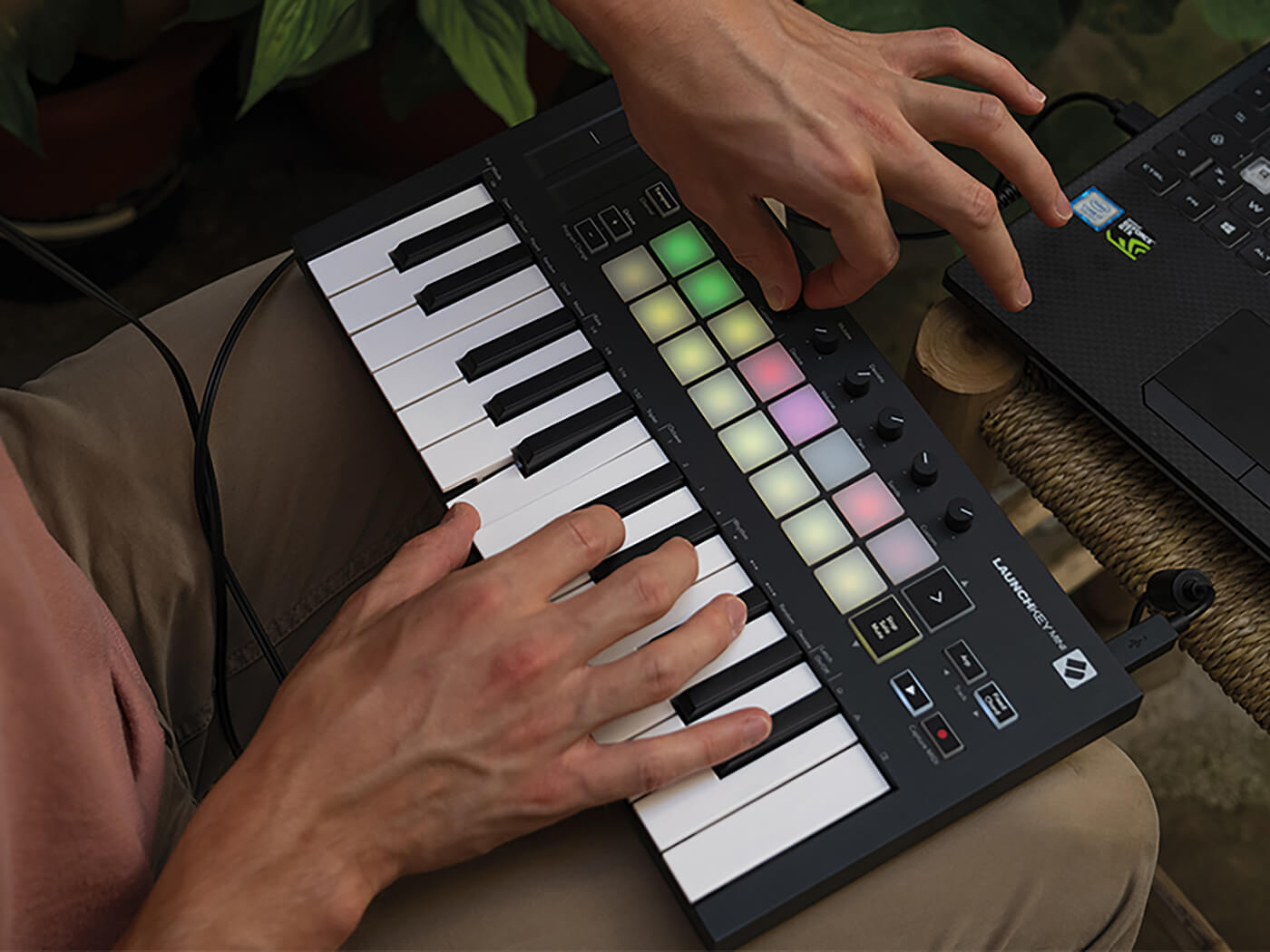 You might think that Novation’s Launch range is all about the Launchpad, a range of four controllers – including the recently-announced Launchpad X and Launchpad Mini – that offers a completely different experience to traditional keyboard controllers. However, the range also includes the Launch Control XL – a lovely compact fader and rotary controller – plus the Launchkey Mini controller, of which the unit on test here is the latest Mark 3 incarnation.

From iOS to Live

The original Launchkey Mini came with a bundle of both desktop and iOS software, although we thought it well suited to the latter format. The new Launchkey Mini is out-and-out aimed at Ableton Live users, but will also control any HUI compatible DAW, and also mobile devices.

Like the original, you get 16 multi-coloured pads, buttons (including Octave and Transport controls) and eight rotaries, but now you also get touch pitch-bend and modulations strips. The mini keyboard is just that, a little spongy but perfectly playable, especially compared to the slew of cheap plastic synths and other products that I am getting that now all seem to feature touch strips. Hardware with proper keys seems to be going out of fashion so I’m glad to get something with moving parts here!

The rest of the unit fits in with Novation’s latest sleek aesthetic – black and cool, rather than the dark grey of the original – and the unit is light in weight but feels pretty durable. It’s therefore easy to carry around and a nice little controller to partner with Laptop Livers, of which there are a great many.

There’s little else in the box – just a USB cable – but you do get an impressive software bundle, including packs from Softube (Time and Tone), and AAS (Session Bundle) plus Spitfire’s Audio LABS, Ableton Live Lite, XLN Audio Addictive Keys and membership to Novation’s Sound Collective. You don’t, however – as is usual these days, I guess – get an instruction manual. You’ll have to wrestle a little with a drop down menu setup on the Novation website (just select All Downloads and you’ll get it).

Having said that, you might not need instructions to get Launchkey up and running. Back in the day, I used to hate testing controllers as they would inevitably involve some kind of download or update, some wrestling with preferences and knobs producing notes and keys producing nothing. Happily, we are approaching 2020 so it is simply a matter of plugging Lunchkey Mini in, it powering by USB, loading Live up and off you go.

Launchkey enters Session mode and displays the arrangement of clips of whatever tune loads up across its pads, and the Play button plays them. Select whatever track you want with the lower key, and hit the lit upper pad to launch a clip. There’s also a Stop/ Solo/ Mute button to toggle between those options per track. Press this once and the row of eight pads lights red; hit one and it will dim, indicating that the track will stop (or is stopped). Hit the button again and the row of pads will light up blue allowing you to solo each; and finally, hit it again and they will light yellow, allowing you to mute each track.

There are a variety of ways to navigate around Live using the controller. Hitting the Shift key will select the secondary arrow function of four buttons to the right of the main 16 pads, which let you navigate around the rest of your session. Using Shift again and either the big Play button – which is also used to launch Scenes or rows of clips – or Stop/Solo/Mute button will move the 2×8 grid representing what clips Launchkey controls up or down. 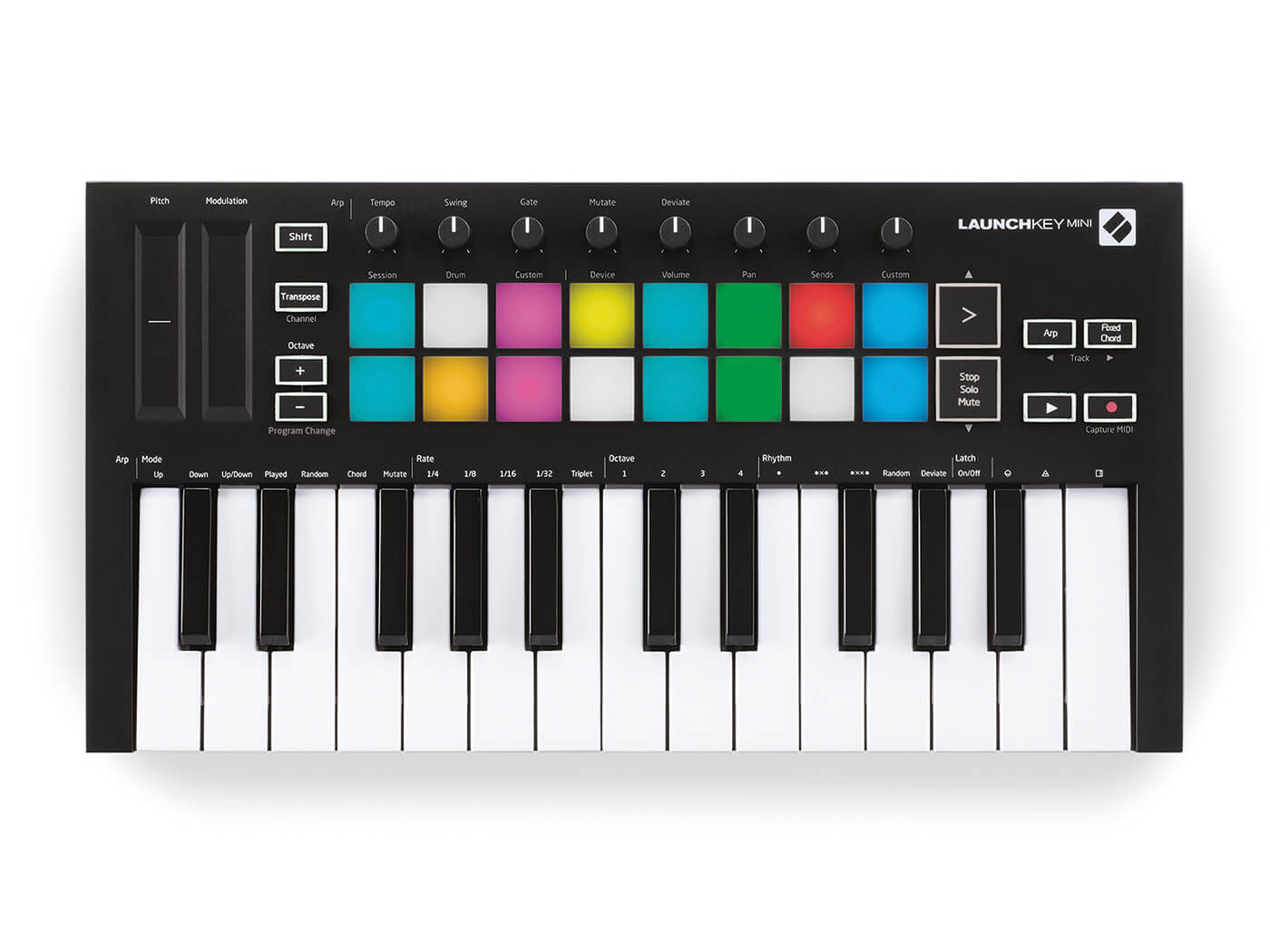 Recording is as simple as hitting the red Record button and playing notes to record into a clip while a Capture MIDI function lets you record any recently played MIDI notes in the record-armed track into a track, even if Record wasn’t armed.

Holding the Shift button allows you to leave Session mode and enter Drum mode – by simultaneously pressing the third pad along from the top left – which then allows you to use the velocity-sensitive pads to play whatever kit you have loaded onto a Live track. The pads light up in the colour of the drum rack track you have selected and go green when you play them, or turn red once recorded.

Another great feature on Launckey Mini is the Device option. Like Drum Mode you use the Shift key (now arguably becoming the most important key on the unit) and then select it via the fourth pad. This then assigns the eight rotaries to the primary controls on whatever Ableton or third party instruments or effect plug-ins you have assigned to each Live track. You will have to open the plug-in up manually to see what you are controlling, but it does seem to automatically assign the eight keys to the most important parameters, certainly of the Live devices I tried.

The final use of the much-pressed Shift button allows you to access Live’s mixer and use the rotaries to directly control functions within it. Holding Shift and the fifth, sixth and seventh Pads will let you control volume, pan and effect send options, respectively. All in all, once you get your head around the Shift options, you will not only be quickly navigating around your sessions, but controlling a lot of detail and parameters within them.

As well as all of that control, Launchkey has a few other nice features. There is a very well spec’d arpeggiator (selected with the Arp button) that has several patterns, selected by the keyboard keys and also uses the main dials to adjust Tempo, Gate and Swing as well as Deviate and Mutate, which add rhythmic and random variations to your arpeggios.

The final mode in Launchkey is Fixed Chord, which allows you to set a chord, defined by the bottom root note, and then play related chords with a single key press. Both of these modes are very creative once you get into them, offering quick variations on what you are playing to extend your ideas with a single note press.

Finally, there are other control options – this keyboard doesn’t just do Live. You’ll need Lightning and USB OTG to USB adapters to control both iOS and Android devices, while the 3.5mm MIDI output on Launchkey can control external hardware, but you’ll need to buy a PSU if you want this – USB won’t cut it apparently. I also tried the controller out with Logic without any problems – it even goes down to device level. With the aesthetic of Launchkey pointing to the Live Clip launch function, you can’t help but think that it works with Live best, but there is a lot to enjoy partnered with Logic and other HUI DAWs. 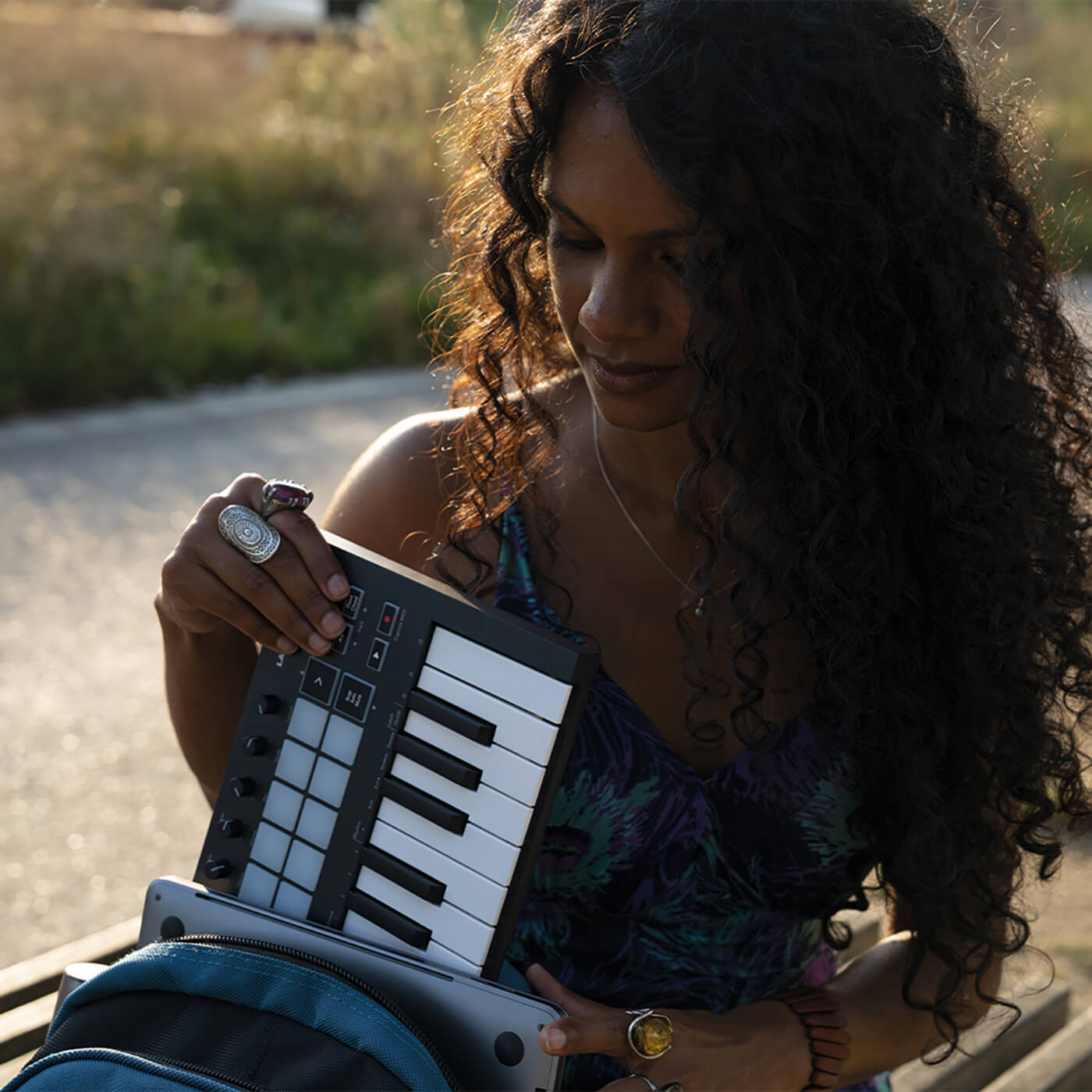 That’s a longer review than I thought I’d be writing as there is a lot more to Launchkey than meets the eye. It’s a fantastic little key, rotary and pad controller that does Live brilliantly and a lot more besides.

Use Live a lot but limited in space? Use Live out and about? If the answer is ‘yes’ to either of these then ‘need’ could well be a word you could use because Launchkey Mini certainly delivers a great control experience for either scenario. We found that after a short time with the (online) manual, we were scooting around Live with some aplomb, accessing functions and parameters without having to access our damn computer mouse.

However, what was more surprising was the level of functionality you can get to with Logic. It looks like it’s out and out Live but this goes quite far with other HUI DAWs too. There are the hardware and phone options that we didn’t get a chance to explore too, so you can see that this Launchkey can do a lot, in a small footprint, and for the price it is pretty amazing. 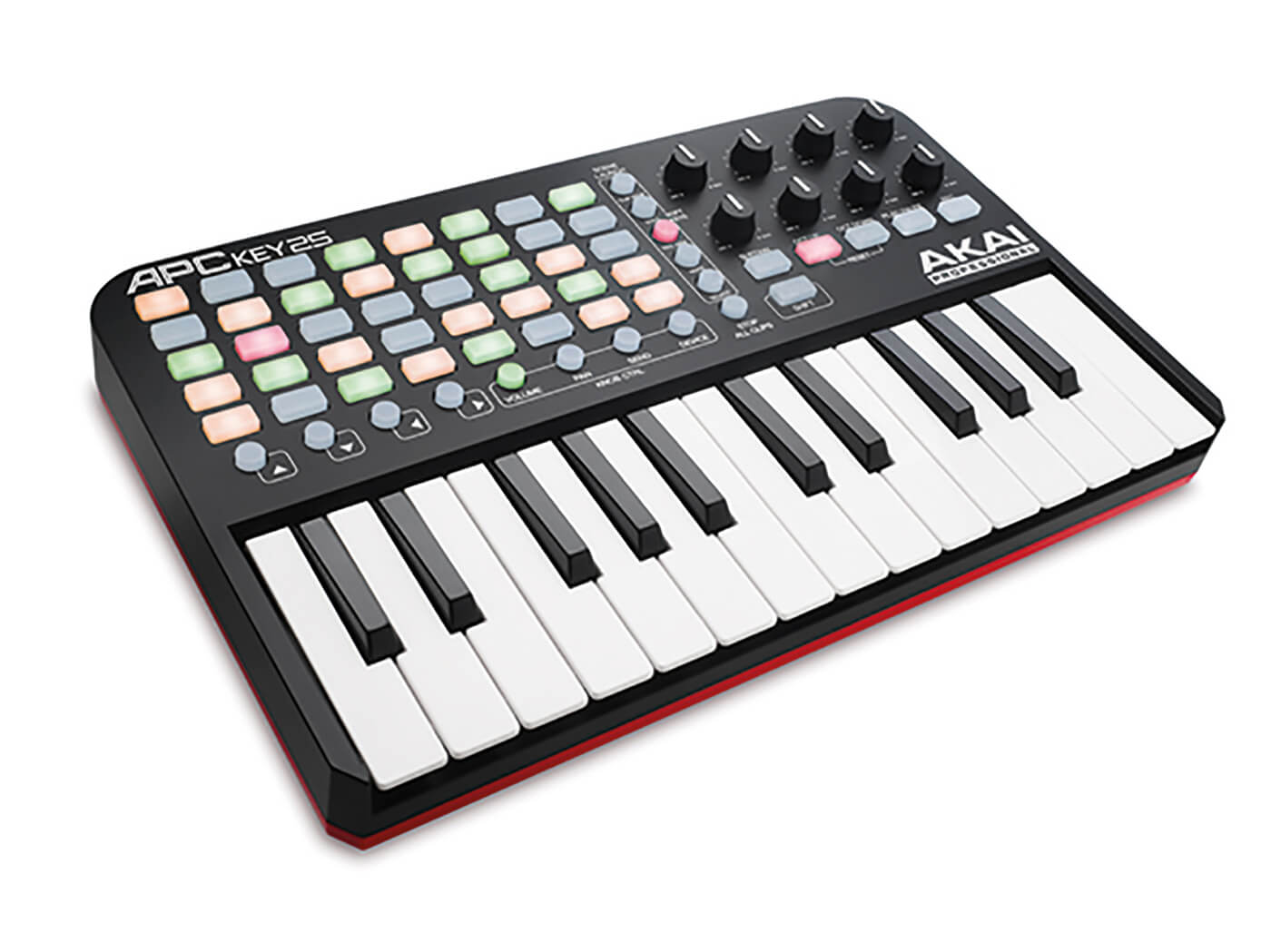 Featuring mini keys, a good software bundle (but not quite up there with Novation’s) and plenty of clip buttons, this remains one of the best USB powered controllers for Live and has also come down in price by some way. 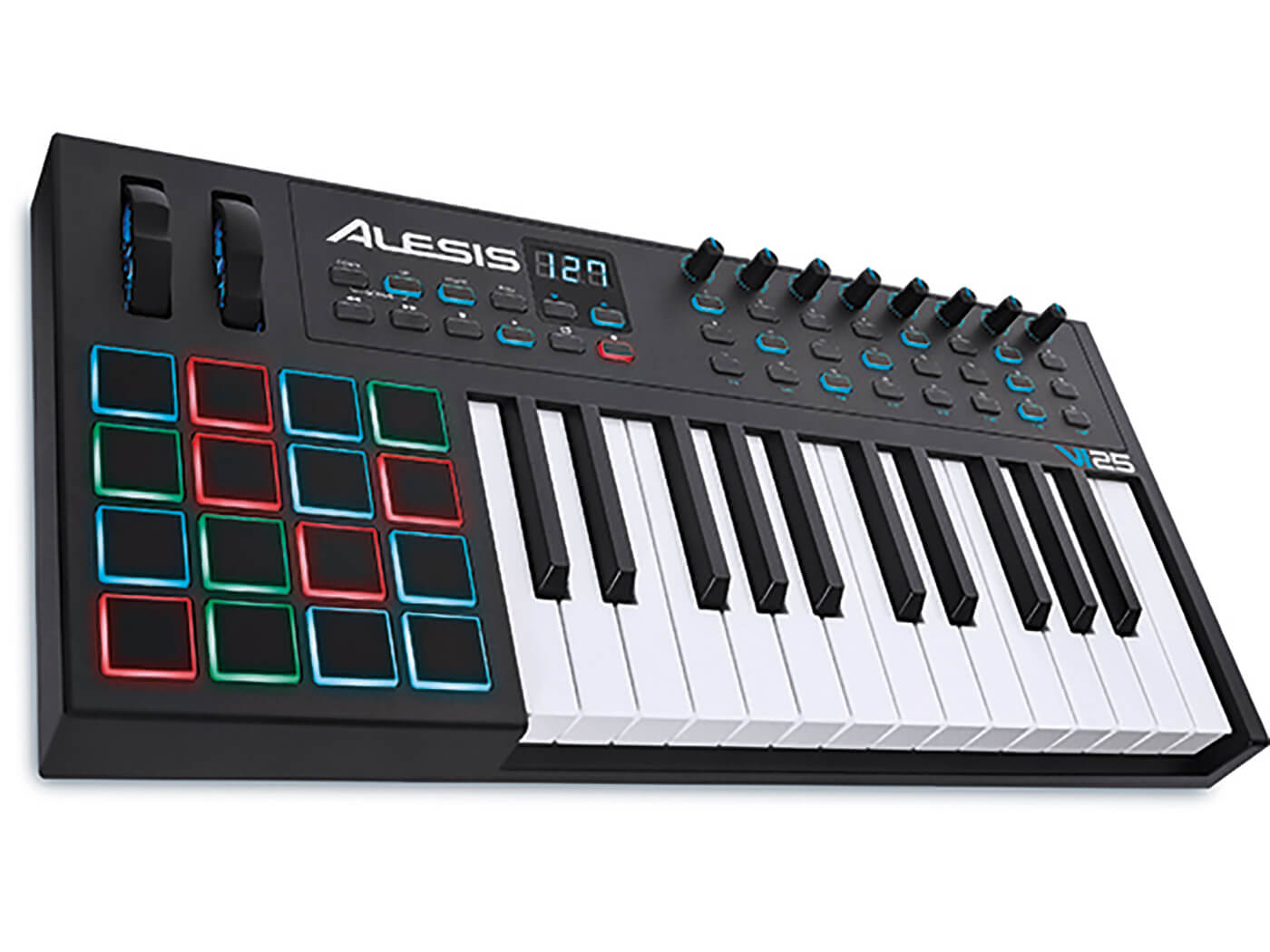 I reviewed the VI range of Alesis keyboards a while back but it’s still a strong contender, featuring pads, good keys and a decent software bundle, including Ableton Live Lite and Xpand!2 by AIR Music Tech.