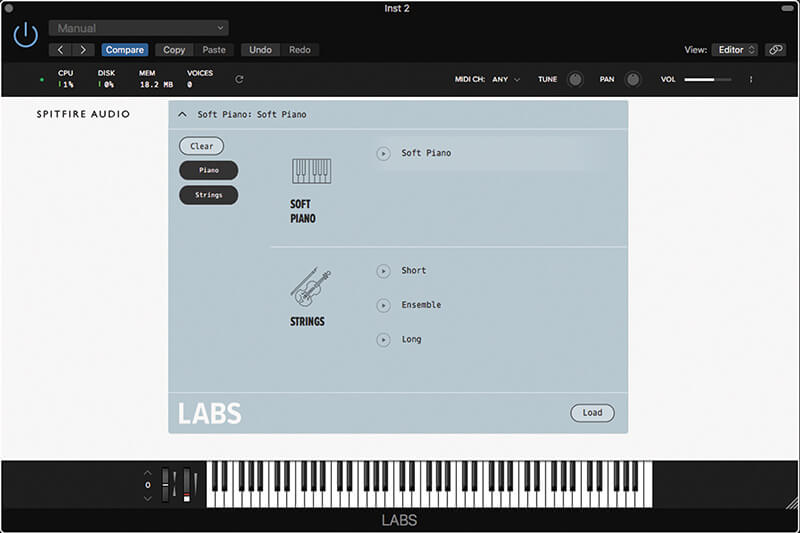 Since 2008, those extremely generous folks at Spitfire Audio – in addition to their more epic-sized collections – have offered a series of small but perfectly formed sample libraries, which have been produced under the banner of their LABS series.

Apart from being a veritable feast of different and highly useable sample nuggets, the LABS libraries were also focussed on raising money for charities, with each purchase costing just a couple of quid. Now LABS is back in a newly refreshed form, using Spitfire’s own player plug-in, and in something of a coup, it’s now completely free!

The first instrument is the ubiquitous Soft Piano, which has become something of a stalwart for many soundtrack composers. This upright, felted piano offers a softer tone and was recorded back in 2008 by Nick Taylor, at Air Edel.

Apart from the intensely personal timbre, you can hear all the elements of the ringing sustain pedal, when deployed, along with the creaking of the piano frame. Just add good reverberation for absolute soundtrack gold dust!

The second installment of this new LABS series is a small ensemble of 14 string players, recorded by Harry Wilson at Spitfire HQ. There’s a choice of either short or sustained articulations, with control of dynamic timbre and vibrato, directly from the clutter-free interface on the new player.

In common with the soft piano, the timbre is pretty up close and personal, but with the ability to increase reverberation and tightness levels – on the fly. Just because it’s free, don’t think you’re going to be short-changed on the round-robins; I counted six samples on the short articulation, so you won’t get any machine gun fire effects here, in fact it’s very useable and extraordinarily versatile!

I believe the only possible conclusion to draw is that Spitfire are doing a good thing, as Lab’s focus is on inspiring creativity for all, and you can’t not applaud their efforts. These piano and strings samples are really useable, holding their head up high among bigger libraries which could cost considerably more.