Keyboards, keyboards everywhere, but you never have one when you’re on the move. Arturia hopes to change that with its latest portable and rugged MIDI controller solution. 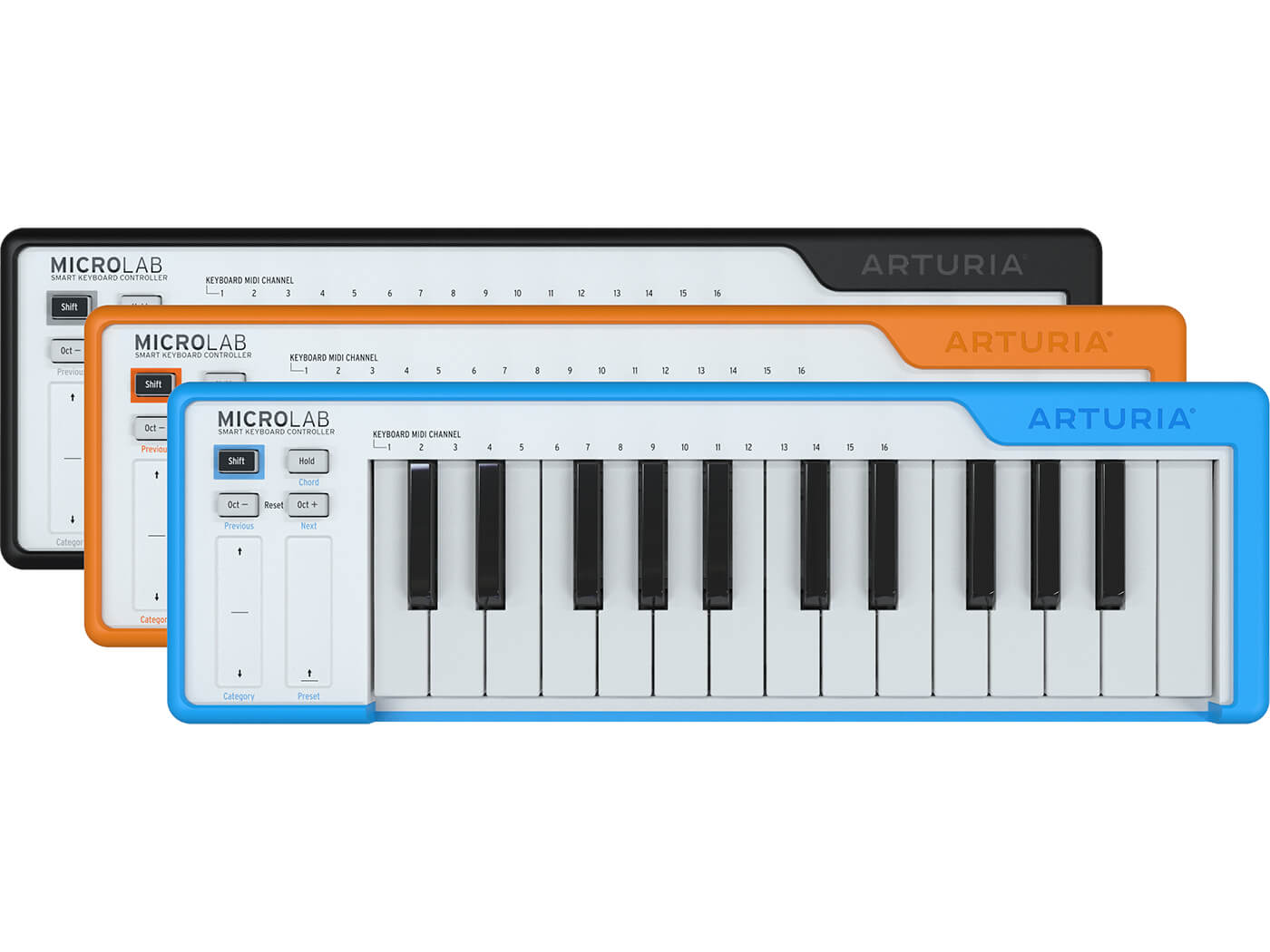 If you were handing out prizes for versatility, Arturia would have to be one of the big contenders for the main prize. It designs and manufacture synths, in both hardware and software, with connectivity to conventional MIDI, USB and even CV/Gate, and offers modern kit that plays nicely with both vintage and Eurorack modular. Whereas many of its products offer a number of assets, the credentials for the MicroLab are more simplistic, being a MIDI controller designed specifically to be connected to a computer or tablet.

When you first remove the MicroLab from its cardboard sleeve, it offers a very similar look to Arturia’s Keylab, although MicroLab only offers two octaves of keyboard, with the prerequisite octave switching, which is found to the left of the panel. Unlike its predecessor, MicroLab also offers a far more rugged look and feel, thanks to a rubberised outer shell, which wraps around the unit rather like a mobile phone case. This offers two elements of functionality; it clearly makes the keyboard more robust, offering a degree of protection, while also offering a truly convenient location to store the included USB cable. 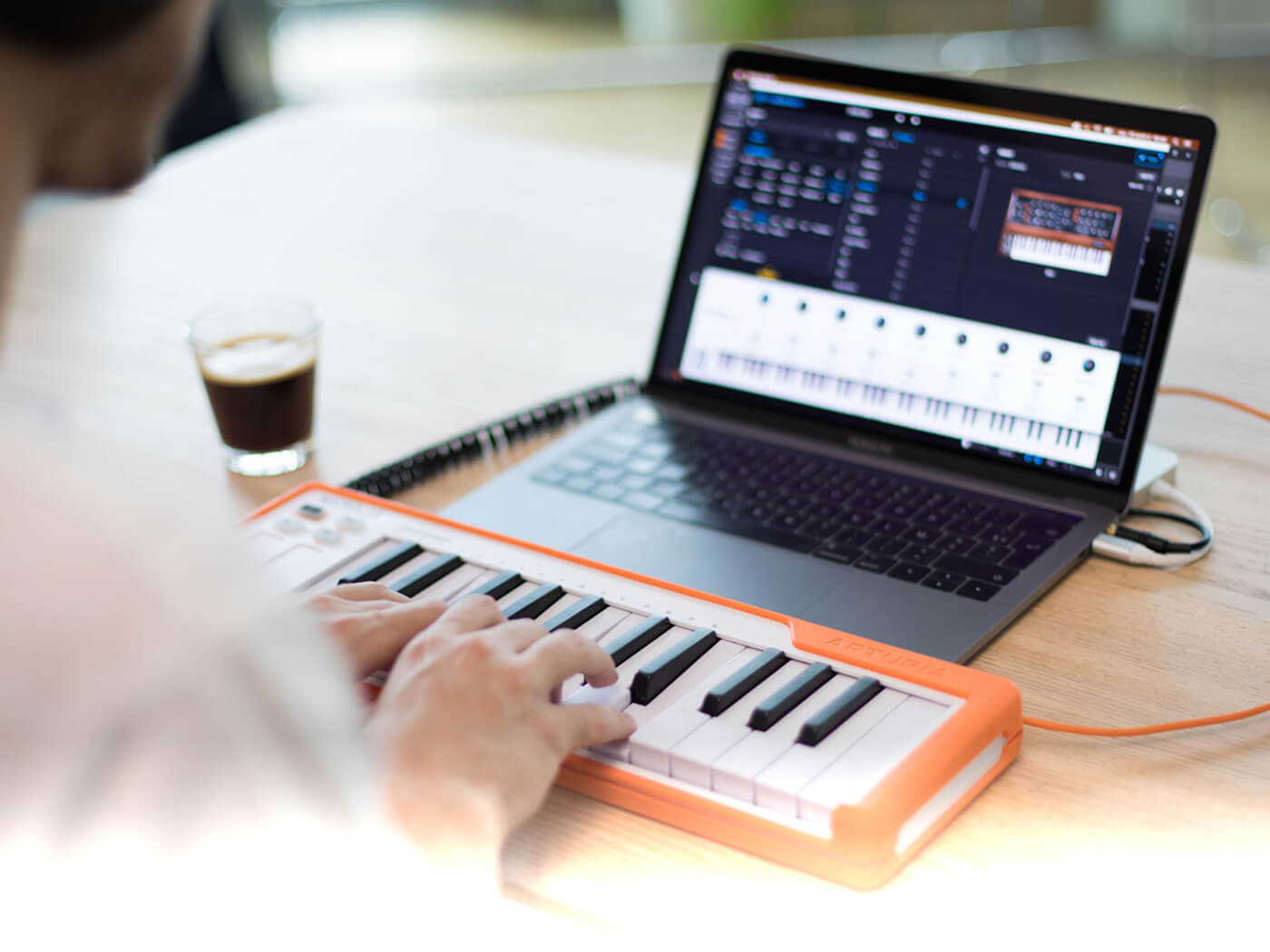 This cable has a 90-degree angle at one end, meaning that the cable is entirely flush with the case, while the connectivity end offers a standard USB A-type connector. The cable itself wraps snugly and beautifully around the rubberised case, meaning that if you do decide to take this on the move, which is surely its greatest cache in design, you’ll not be scrabbling around the bottom of your laptop bag, in order to find a cable, or will you?

This promotes a question; what kind of connector do you really need for your computer? I regularly find myself needing to work on the move, not literally while walking down the street, but I’ll often be shacked up in a shop purveying fine blends of coffee, looking to use a spare hour in between meetings. This makes the MicroLab very tempting indeed, however as I am equipped with a reasonably up-to-date MacBook Pro, the standard USB A connector will not fit, at least not without a different cable or an adapter. You could switch cables, but finding one that would fit as snuggly as the included incarnation might be a challenge, usurping the cool element of the cable tidy. 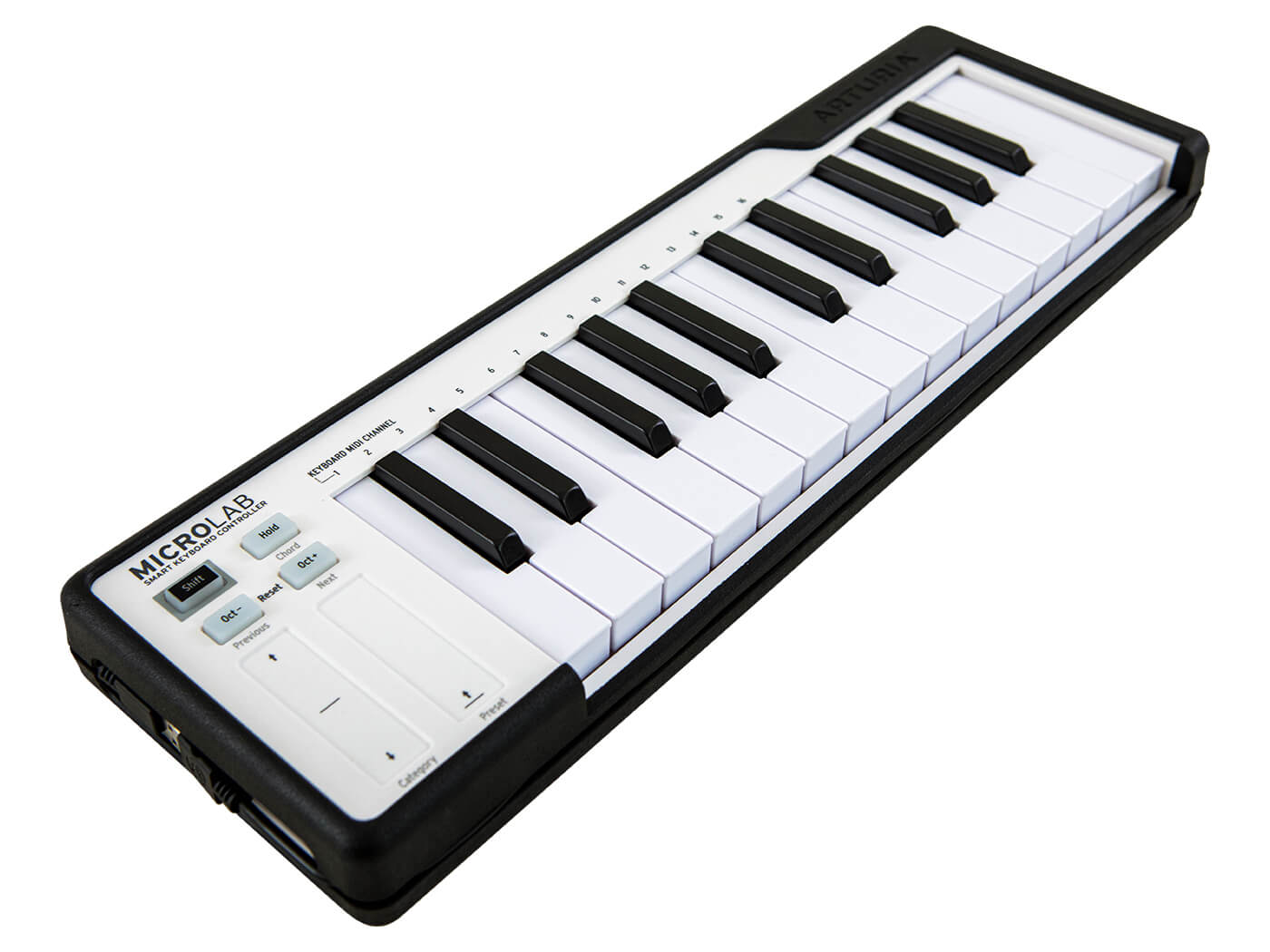 Not withstanding, I imagine that for many the standard USB connection will suffice, although you may well need an adapter to connect to an Android or iOS device, which in the case of the latter will require the use of Apple’s iPad Camera Connection kit adapter.

The keyboard itself is described as slim, and feels very nice to play. Apart from two octave buttons, which allow for shifting by a couple of octaves in each direction, there’s also a hold button for performing sustain functions, and a shift key for utility style duties, such as adjusting MIDI transmission channels.

In addition to its more usual keyboard operation, it is also possible to program a chord into the MicroLab, by pressing the utility buttons located to the left. The chord can contain between two and ten notes, dependent on any limitation of your chosen timbral source. Immediate playback of the chord will then ensue, using just a single finger to play.

There’s also integration with Arturia’s Analog Lab Lite software, again using the utility buttons. This allows for incremental patch selection using the octave select switches, as well as rapid scrolling of both sound category type and patch number, by employing the pitch and modulation strips. Given the vast number of excellent patches on offer, this can assist access hugely.

This is a sharp little keyboard which fulfills its singular credential well. It’s designed to be small, being just over 400mm wide, and lightweight at just 770g, although I did find that it was a very tight squeeze to get into my own 15” based laptop rucksack, being just a tad too long. 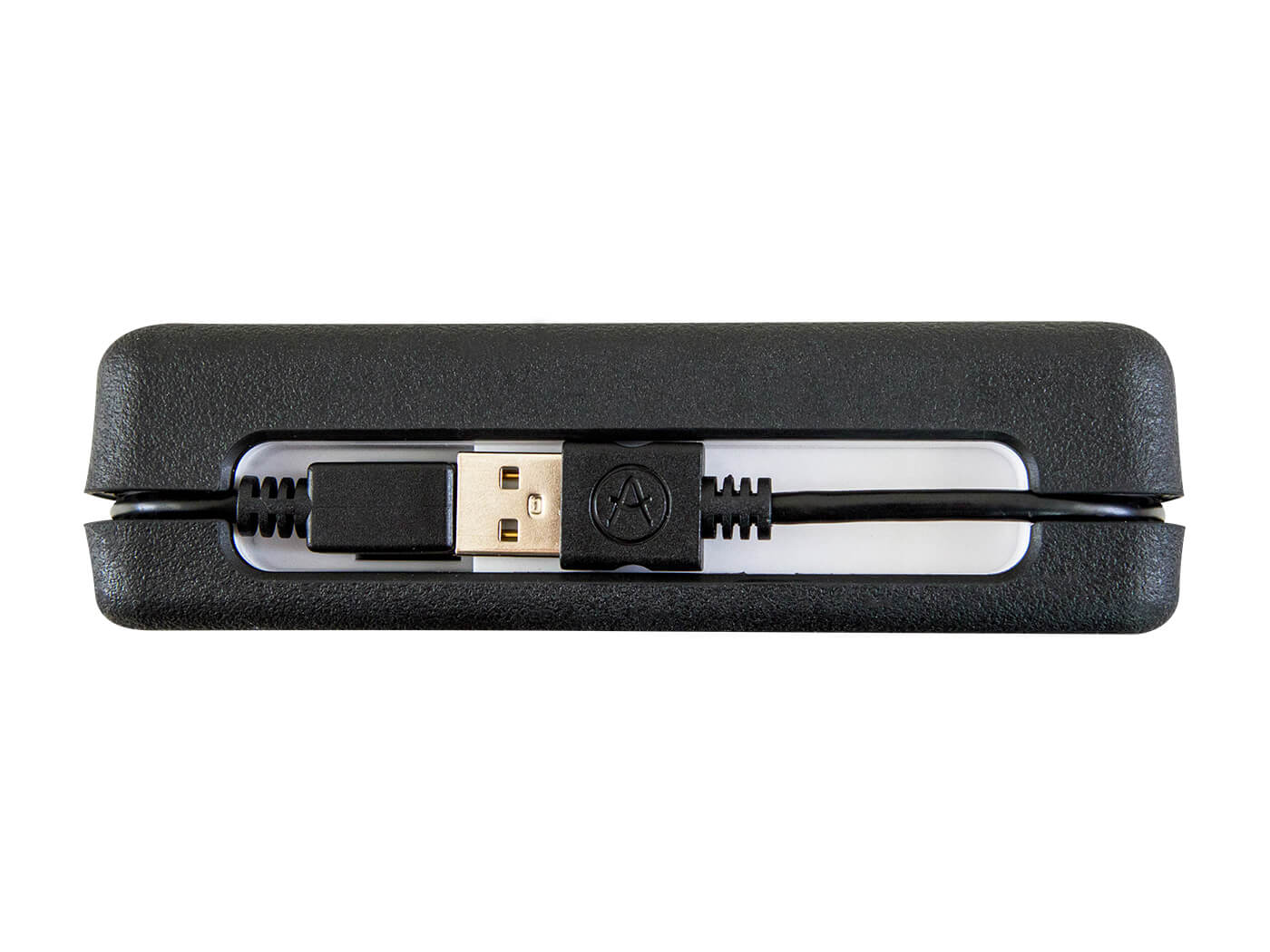 However, it’s got a great feel when in use and ships with some very useable additions, in the shape of a Lite version of Arturia’s excellent Analog Lab software, UVI’s Steinway Piano model and a stripped back version of Bitwig. It does lack the extras found on the Keylab, in the shape of MIDI, CV/Gate and a Sequencer/Arpeggiator, but arguably, you’ll be using this with a DAW or app, which may well cater for some of these facets. If you need a simple plug and play USB-based controller, and you’re often on the move, this could be a great fit.

To use the old advertising strap line, the MicroLab does exactly what it says on the tin. It’s a portable and rugged mini-keyboard controller, which you plug in to your computer or tablet, and it just works. It lacks MIDI connectors, but that’s just fine, because it’s designed to be used and powered by a computer. The USB cable-tidy is elegant, only scuppered by the modern age of different styles of cable connectivity, which is a slight drag for modern Mac-based laptops, but the keyboard itself offers a reasonable playing experience, albeit one that has to be centred around slim keys. 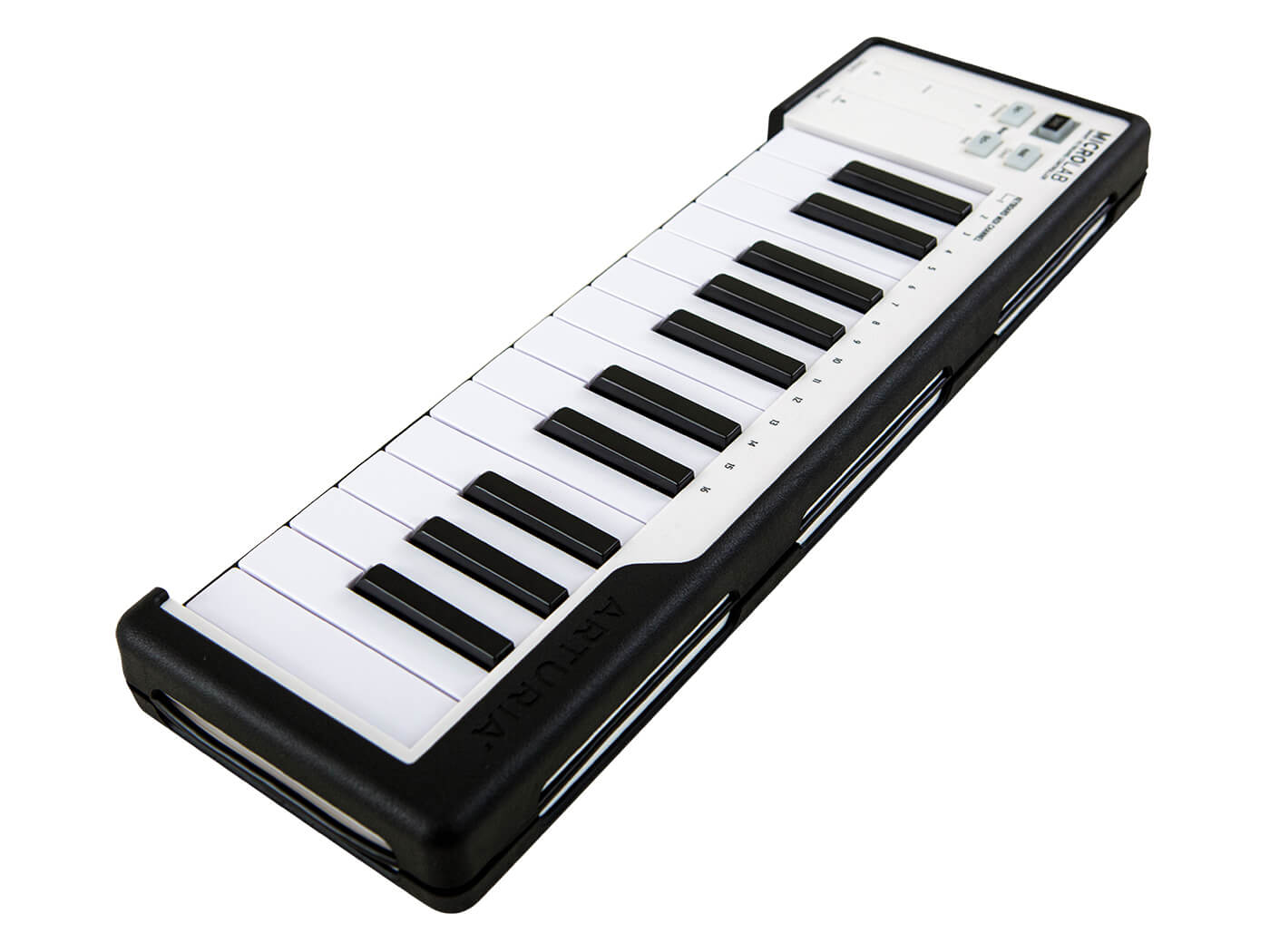 Above all, you plug it in and just play, and the included software will also make it very appealing to anyone on a tight budget. If you want to use it on the move, check it fits in your laptop bag before you commit to buy. 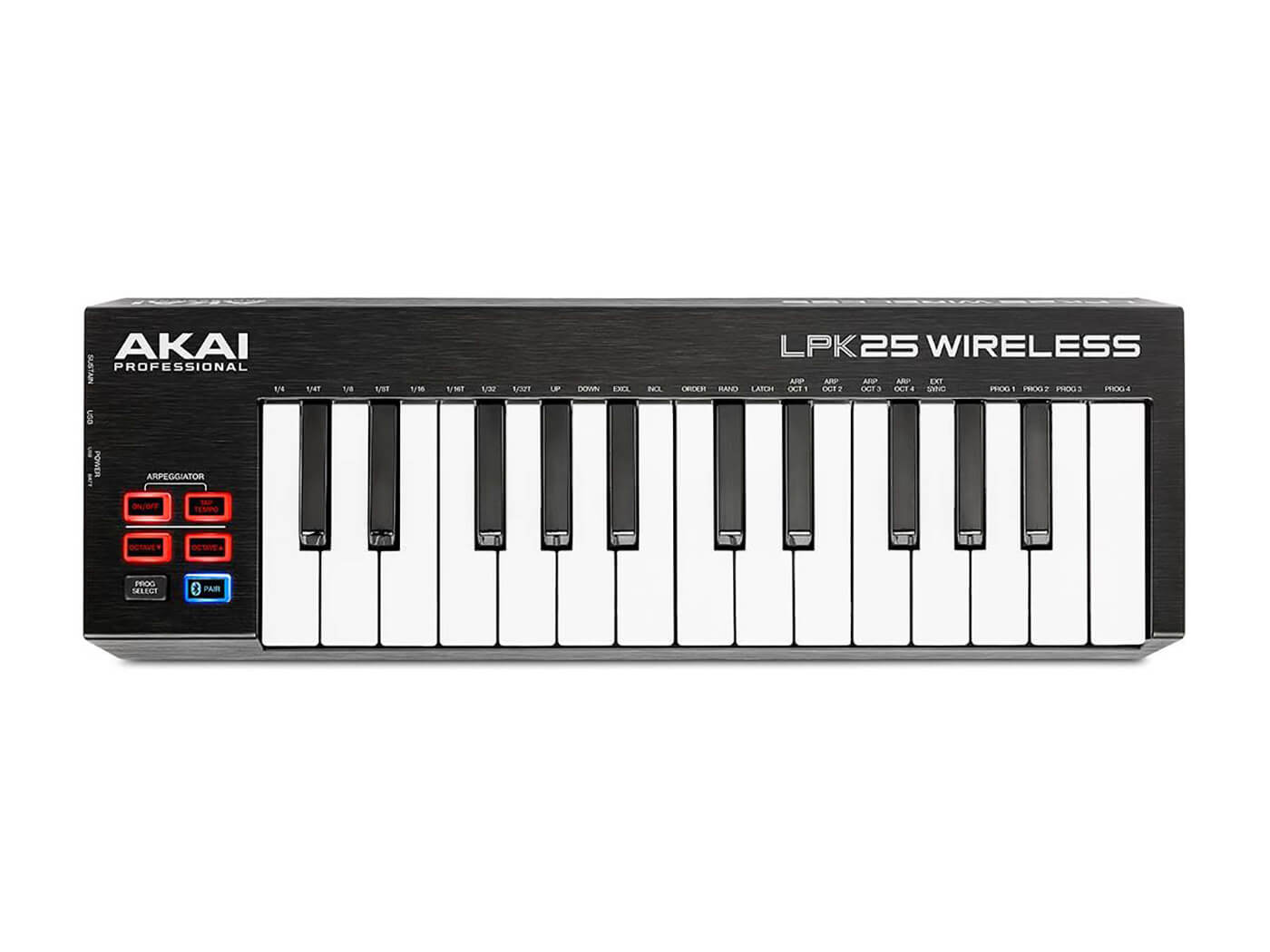 Even smaller than the Microlab, Akai’s MIDI controller can be powered via batteries or USB, while also being Bluetooth. It’s small and light sizing make it a perfect portable solution. 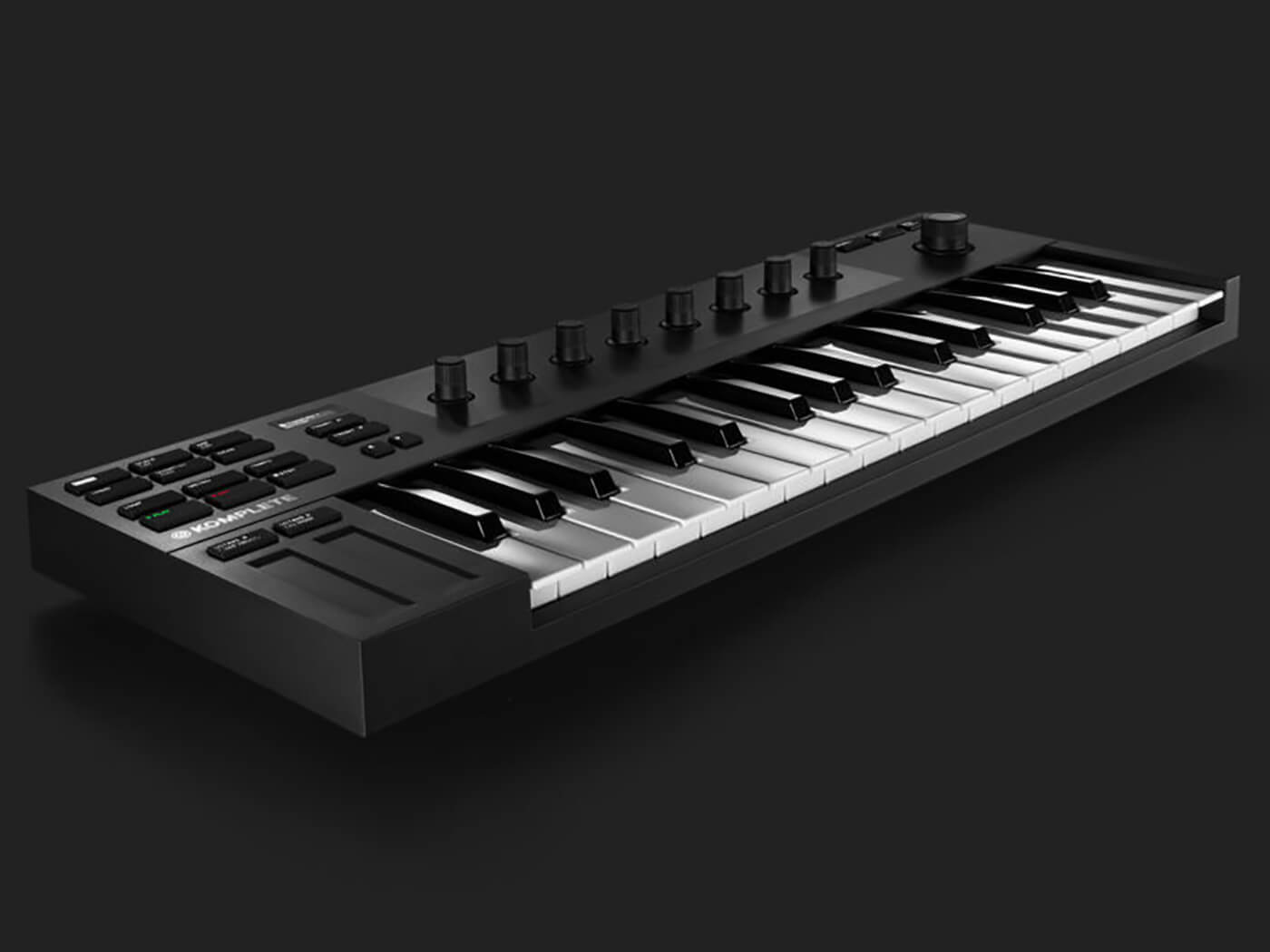 This slightly bigger and heavier offering will resonate with anyone working with NI software on the move. It ships with useful and excellent sequencing and sound creation/playback tools.