A stylish all-in-one soundbar that sounds as good as it looks. 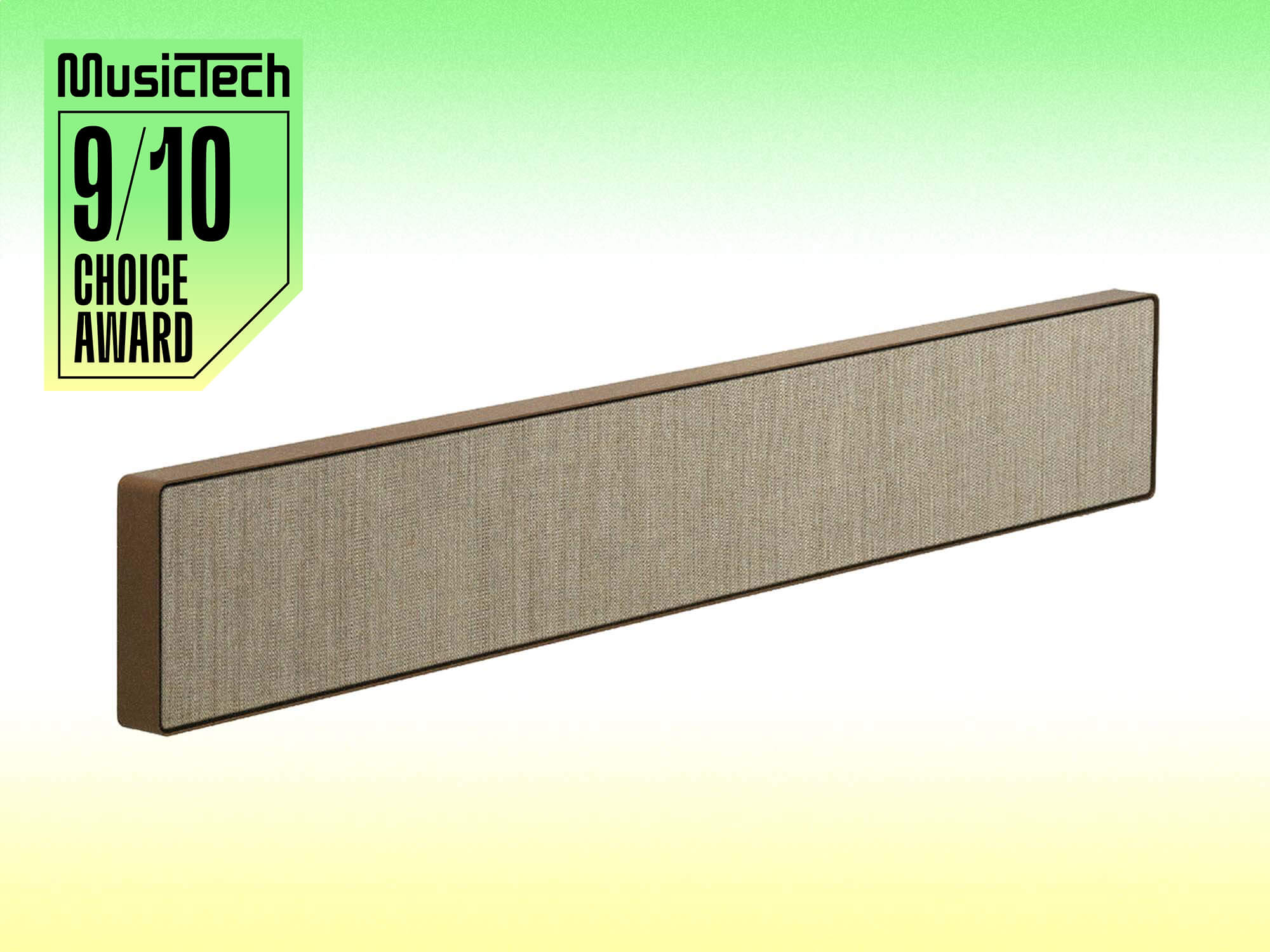 The Bang & Olufsen Beosound Stage is an all-in-one soundbar which supports the Dolby Atmos 3D sound standard and features active DSP speakers. All of this promises an immersive high-end home cinema experience without the need to have multiple speakers set up around your living room.

Packing three speakers and 11 drivers spanning a frequency range of 32Hz to 22,000Hz, the B&O soundbar packs enough sonic firepower here for you to dispense with having a standalone subwoofer.

Not content to exist as a mere soundbar, the Beosound Stage can also moonlight as a music centre. Apple AirPlay 2 and Google Chromecast are supported, along with B&O’s own BeoLink platform, which lets you stream music to other B&O BeoLink speakers dotted around your home.

But if it sounds as good as it looks, then that’s money well spent, right?

The Beosound Stage, designed in collaboration with Copenhagen-based artisans NORM Architects, is an exemplar of minimalism. Intended to sit upright on a TV stand, or be wall-mounted, the Beosound Stage is a large cuboid framed by a single piece of aluminium or oak sitting on top of a smaller cuboid.

Touch-sensitive controls for Bluetooth pairing, source, skip forward/back and volume are built into the frame. That means there are no cutaways or indentations for the controls – just a smooth uninterrupted surface which loops around the main section. Small status LEDs are built into the lower deck.

A recessed area for cables sits on the underside, in between grooves for the wall mounts, so however you’ve got the Beosound Stage set up, everything can be tucked away. Everything looks very neat and tidy indeed.

While it looks compact, the Beosound Stage is fairly heavy, and requires a bit of space – it’s very much a soundbar that’s designed for larger living rooms.

The Beosound Stage measures 110cm wide, 7.7cm high and 17cm deep, if you’re having it facing upwards. If you’re wall-mounting it, you’ll need enough space to accommodate 17cm under your TV. The Beosound Stage also weighs around 8kg, so make sure whatever wall you’re fixing it to can support that.

Due to uneven weight distribution, the Beosound Stage is not easy to prop upright on its own. Our review sample didn’t come with any feet or kickstands to slot in the cross-shaped grooves in the back. There was nowhere convenient to wall-mount it, and so finding a place for it to rest so that it was perpendicular to the surface it was resting on was precarious.

There’s an official stand for the Beosound Stage, but this is optimised specifically for LG OLED C TVs, so it won’t be a solution for everyone.

In terms of connections, there are two HDMI 2.0 ports (one with eARC), a 3.5mm line-in, and two Ethernet ports: one for general internet access, the other for a connecting the Beosound Stage to a compatible LG TV for integrated control with the Beoremote One.

This is a high-end infra-red and Bluetooth remote that’s designed to work with other B&O audio devices and TVs. That said, as this remote costs somewhere in the region of $350, it’s perhaps for hardcore B&O enthusiasts only.

Sadly, as B&O hasn’t bunged a Beoremote One in the box with the Beosound Stage, you’ll have to make do with your existing TV remote control and your phone.

Once you’ve plugged the soundbar into your TV’s HDMI-ARC connection, you can turn the device on and off and adjust the volume using your TV’s normal remote.

If you want to do things like tinker with EQ or stream music to the soundbar, you’ll need to download the B&O apps (iOS, Android) to complete the setup process. These use Google Home, which means you’ll need to have a Google Account to hand in order to complete this. If you don’t have or don’t want one, there is a workaround for that published here.

As well as being required to complete the setup process, the B&O apps also let you flit between presets, set the default volume level and toggle a ‘loudness’ mode, which boosts bass and treble at low volumes. You can also use the app to set alarms, if you’ve ever wanted a soundbar which also doubles as an extremely loud alarm clock.

While you’re able to stream music to other B&O speakers via the BeoLink multiroom platform, it is not currently possible to have these speakers working as wireless subwoofers and side speakers in tandem with the Beosound Stage.

Given the arrangement of the speakers, you might think that you’ll lose something if you’ve got the Beosound Stage lying flat, with the speakers pointing upwards rather than towards you. The truth is, there isn’t really much difference.

With the Beosound Stage lying flat on a stand, I found that the bass response was a little better, but I imagine that this would be the same if I was able to mount the soundbar on a wall. However you position it, unless you’ve got perfect hearing, I doubt that in a blind test you’d be able to tell which way it was set up.

Each of the 11 drivers have their own 50-watt amplifier, and everything sits within a sealed cabinet. The rule of thumb is that sealed enclosures aren’t quite as bassy as ported cabinets. The casual observer may be forgiven for thinking that bass tones here aren’t loud or prominent – this is not the case here, as low end noises are delivered with a pleasing wallop.

Midrange and trebly noises are well-defined, too, as I discovered when playing content with Dolby Atmos sound.

I downloaded Zack Snyder’s Justice League on Sky Q, and I re-watched key scenes from Jumanji: The Next Level and The Secret Garden to see how the Beosound Stage compared with the Sennheiser Ambeo Soundbar.

The big fight scenes in Justice League sounded appropriately ridiculous through the Beosound Stage. The sounds of Superman punching giant slabs of marble to atoms at around the 2 hours 38 minutes mark was particularly pleasing. Elsewhere, the rush of displaced air caused by Cyborg and the flying Parademons zipping along at high speeds travelled very well across the soundstage.

It’s not just about accentuating the big explosions. Tiny details, like the rustling of leaves and flicking of light switches, were pin-sharp and clearly defined through the Beosound Stage. Dialogue was also matched relative to where characters appear in the frame, making things even more immersive.

The DSP speakers did a great job of creating the impression of 3D space even if technically it’s not ‘true’ surround sound. As with the Sennheiser soundbar, the sense of immersion was very convincing, so much so that at times it really did feel like noises were coming in at you from all angles.

Likewise, the Beosound Stage doesn’t fully support 5.1 audio by virtue of it being a three-channel speaker. But having said that, streamed content with 5.1 audio like Netflix’s Katla and Mank still sounded fabulous. The rumbling volcanic activity and thunderclaps in the former as well as the flapping of script papers in the latter were frighteningly realistic.

There’s no support for Dolby Atmos competitors DTS:X or MPEG-H Audio here. Frankly, this is less of a big deal as most content currently uses the Dolby standard. But if adoption rates of these rival standards were to increase, the Beosound Stage’s lack of compatibility could become an issue in the future.

Like many high-end soundbars, there are several preset modes to play with here: TV, Music, Movie, News, Night Listening and a neutral mode called simply None.

The TV mode is very good at making sure that dialogue is pushed to the front, and this works very well when watching news. How useful the other modes are is largely subjective.

Night Listening, as the name implies, is for those times when you don’t want to wake up neighbours and housemates – lower frequencies which might travel through walls are pushed down, but not entirely muted.

I personally wasn’t too impressed by the Music mode, which generally gives bass and the midrange a slight boost, when actually listening to music. And so for the most part I actually stuck with the neutral None mode and fiddled with the bass and treble levels myself.

That said and with the Music mode aside, the Beosound Stage really shines when playing music. There was plenty of separation on Peter Gabriel’s Intruder, a track with very loud snares upfront and centre throughout, and a whispered vocal on the verses. Likewise, the low vocal from Billie Eilish’s I Didn’t Change My Number isn’t buried in the mix, and everything sounds clear and distinct.

Cranking the bass up, I played Dead Prez’s Hip-Hop. This track is good for testing out how well a speaker can handle distorted bass tones, and also, as there are a couple of dropouts where the bassline pauses for a few beats, it’s a useful way to test dynamics.

At full volume, I couldn’t make out any distortion at all, and those dropouts sounded clean and definite, though I don’t think I was very popular with the neighbours when doing so – the Beosound Stage can be pretty mighty when the volume is pushed all the way up.

Luckily, you won’t have to have the volume turned up too much. The drumming on Dave Brubeck’s Take Five from the 2:30 mark onwards sounded cavernous even with the volume turned up halfway. Steve Howe’s acoustic guitar piece Mood For A Day sounded fantastic here too, with little details like fingers sweeping strings at 0:43 and again at 0:56, and a sharp intake of breath at 1:23 noticeable at half volume.

In summary, the B&O Beosound Stage is a highly accomplished all-in-one device that looks and sounds fantastic. It’s not quite as powerful as the Sennheiser Ambeo Soundbar, but then again, that costs almost twice as much as the Beosound Stage, weighs over twice as much, and requires more living room space.

The Beosound Stage is not without its limitations. Chiefly these are the relative lack of ports and the current lack of expansion options. The fact that no remote is included in the box feels a bit cheeky given the price, but it’s something that you can easily find workarounds for.

As this is the first soundbar from Bang & Olufsen, the high-end brand may well expand the range at a later date. But to be honest, the Beosound Stage’s bass response is already pretty good, and only bigger living rooms would really benefit from that. In the meantime, if you want a high-end soundbar with extra speakers, consider the Samsung HW-Q950T ($1,799.99/£1,199), which costs a bit less and even comes with additional speakers and a subwoofer.