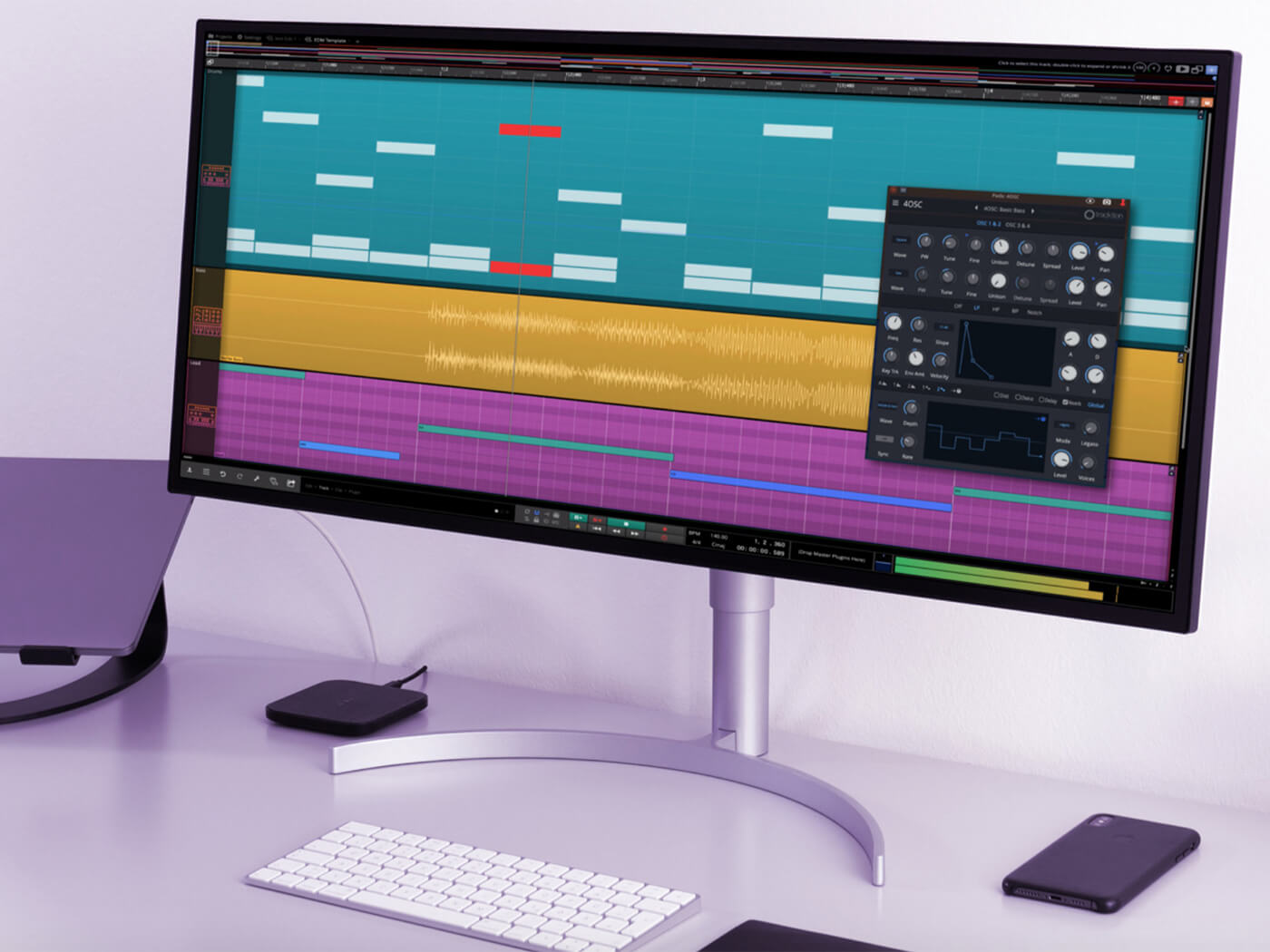 We’ve praised Tracktion’s Waveform on MusicTech before, saying it was “one of the easiest DAWs to use”, and the company appears to stay focused on maintaining that approach. Not just with Waveform Pro 11, but also with Waveform Free, claiming on its website that it’s “the world’s best, fully-featured, completely unlimited free DAW for all music creators”.

“Waveform Free is unlike any other so-called Free DAW”, Tracktion states of its freeware audio workstation. The software offers unlimited amounts of tracks, plug-in support for VST and an arsenal of built-in effects and software instruments.

This includes 4OSC, a subtractive synthesiser with a GUI designed to be friendly, clean and intuitive. It boasts a small CPU footprint while offering four oscillators (hence the name), flexible modulation, MPE compatibility as well as a variety of onboard effects and filters.

A new drum sampler has been added to Waveform Free, allowing you to create your own drum kits and programme them using MIDI. Drag and drop samples in to play with and use MIDI Learn to quickly set up controllers and interactive create beats. The sampler integrates with Waveform’s MIDI Step Clips to seamlessly take your beats into arrangements.

Waveform Free includes a feature to protect plug-ins crashing your system, with plug-in sandboxing. This contains crashes to the plug-in itself and deactivates the VST in question, keeping the host DAW running.

Waveform Pro 11 comes in three versions: Basic, Standard and Extreme. The latter is, naturally, packed with the full amount of features for editing, arranging and sound design.

Waveform Basic will give you everything from Waveform Free, plus the tools you need to add a more professional touch. Bundled into the DAW is Melodyne Essential, Antares Auto-Tune and Imagina Loop library for pro-sounding drum loops and hits. Waveform Basic is priced at $119.

Waveform Standard will give you an extended edition of Imagina Loop for further inspiration, plus everything from Basic. You’ll also have access to BioTek 2, a sampling and synthesis engine that offers “unlimited sound design in a unique and inspirational environment”, Tracktion says. An impressive feature built into Standard is DAW Essentials, an ensemble of 16 plug-ins for use in any DAW, including an EQ, compressor, reverb, delay and everything else you’d need to get creating professional sounding tracks. Waveform Standard costs $259, with Tracktion claiming the ‘Total Pack Value’ at $873.

With Extreme edition you’ll be given the full library of Imagina Loop along with a ton of further editing tools within Waveform, plus direct e-mail tech support if you ever get stuck. MOK Waverazer is included, touted as a “futuristic synth that gives you the power to splice waveforms into aggressive new sounds”, with presets built by revered sound designer, Richard Devine. RetroMod is a collection of virtual instruments designed to pay tribute to classic keyboards and samplers, and Delta-V is a granular synthesiser that was initially based on iOS, but has been brought to desktop after its success. Waveform Extreme will set you back $649, but is said to have a pack value of $1,753.

Find out more at Tracktion.com