Is this how Behringer responds to criticism?

With the ‘KIRN CorkSniffer’, Uli Behringer seems to have launched a bizarre crusade against a veteran journalist. 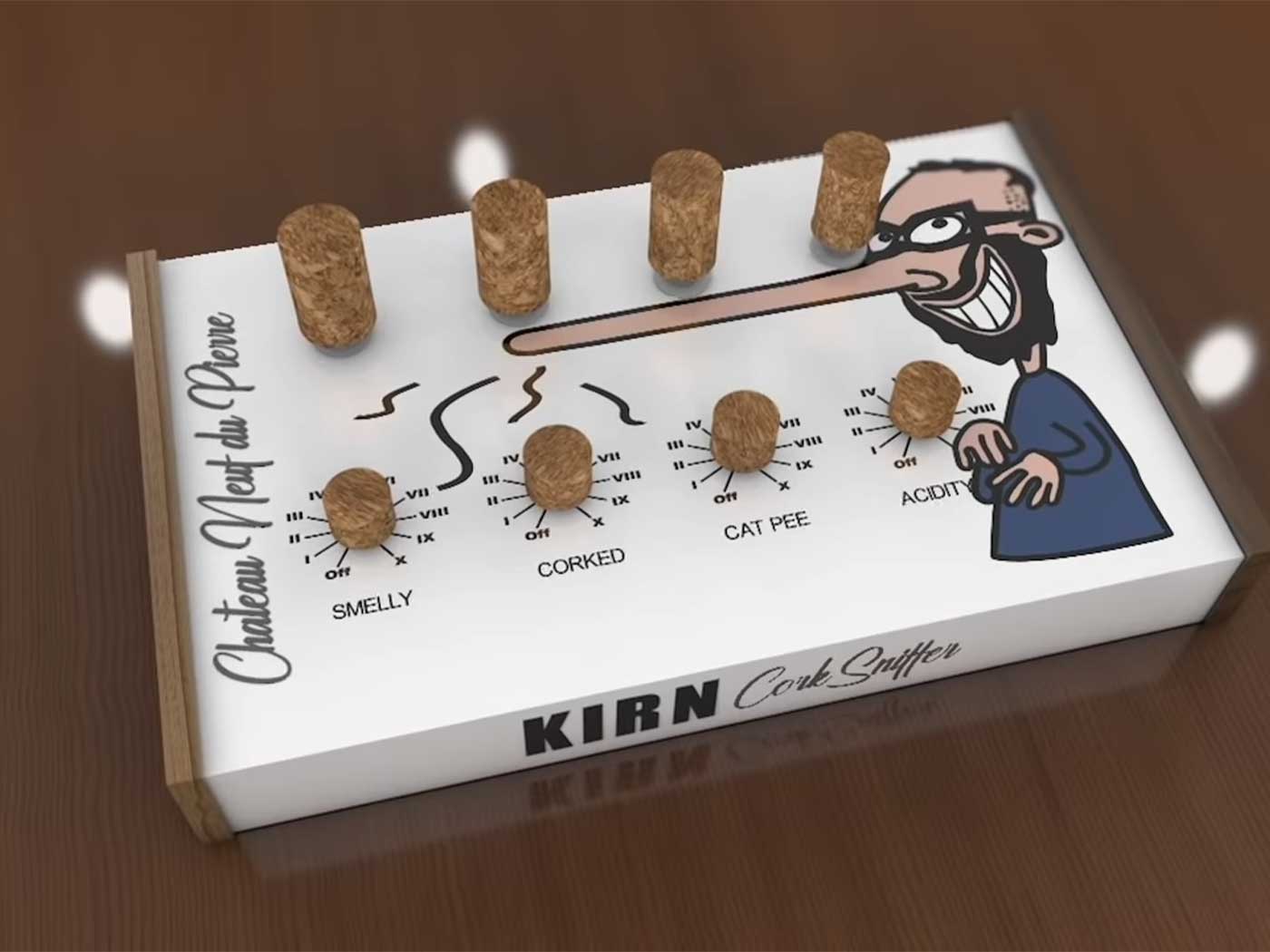 Behringer has seemingly launched a cruel and unusual attack on a widely respected music technology journalist who has previously criticised parent company Music Tribe’s legal practices. In the crosshairs is veteran industry commentator Peter Kirn, founder of CDM and co-creator of MeeBlip synths.

Behringer’s attack comes in the form of a video and social media posts, which showcase a satirical product, that apparently aim to undermine the journalist’s credibility. The company has also trademarked the journo’s name for the purposes of making any products related to electronic music-making. [Editor’s note: Since publishing, Behringer has deleted the video and all social media posts related to the video, and has also said they will cancel the trademark application]

Does this change the nature of the brand’s controversy from claims of litigious cloner to outright bully?

CDM had previously reported on Behringer’s alleged intimidation of Midifan, a Chinese music technology site that accused the company of being “a copycat”. Music Tribe then trademarked the name KIRN in December 2019, prompting people to speculate that it was creating a MeeBlip clone.

Instead, on 2 March 2020, Behringer published the video above that depicts a render of a ‘synth’ called the KIRN CorkSniffer.

We reached out to Peter Kirn for his official statement on the apparent attack, but he declined to comment in the current circumstances.

The term ‘cork sniffer’ originates from the wine tasting community, describing individuals who argue and debate over the subtleties of various factors that contribute to flavour. A more obvious nod toward this from Behringer is the “Chateau Neuf du Pierre” that can be seen across the left side of the front panel.

In other words, the word CorkSniffer here implies overanalysis and snobbery towards synthesisers. A caricature of a man with glasses, beard and an elongated nose takes up most of the front panel design. Comments on this Reddit thread as well as various Facebook commenters on Behringer’s own post suggest possible interpretations with a more sinister edge.

Behringer’s PR seems to be working overtime and appears to have deleted comments by social media users who have expressed disgust or outrage at what they say is the company’s underhanded marketing tactics. 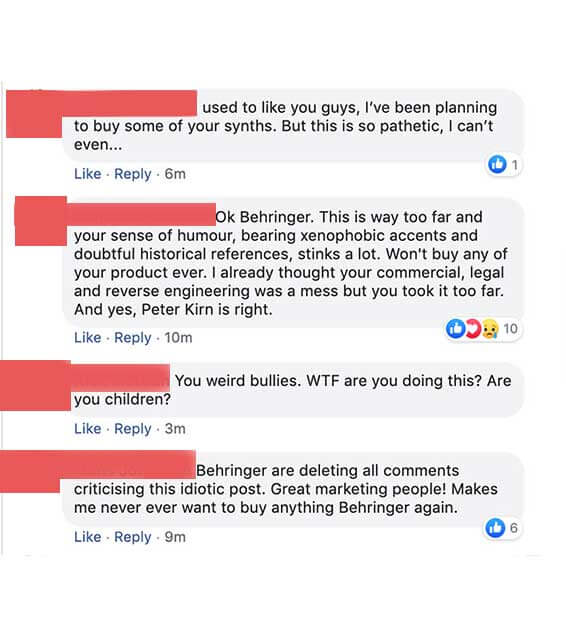 One Twitter user has even pointed out the similarity between the mocked-up synth and an actual product in market, also called The Cork Sniffer. 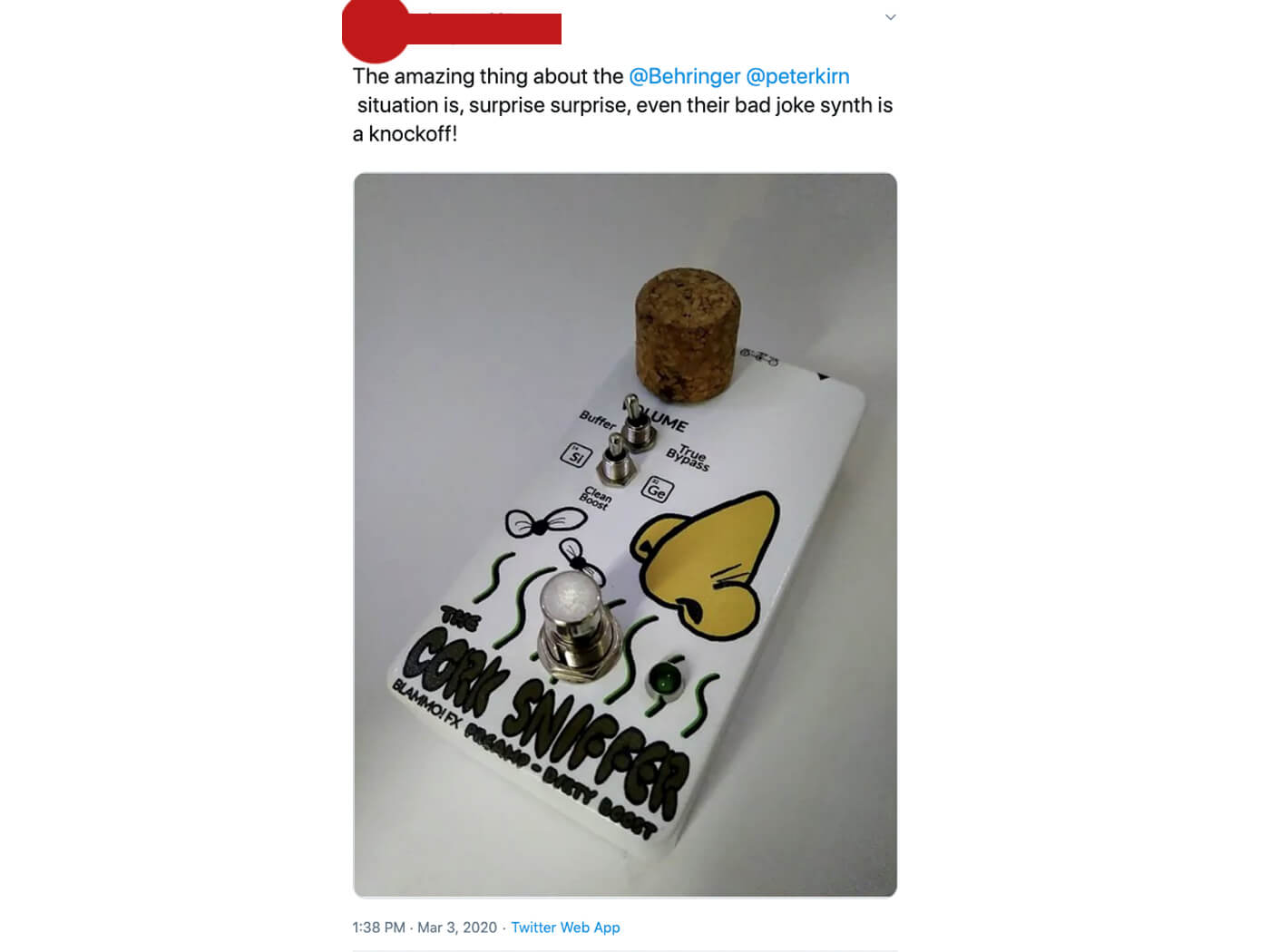 This is not the first time that the company has made not-so-thinly veiled references to Kirn. In the past month, two other Facebook posts seem to take potshots at the journalist.

Last night, the company posted to the social media platform a photo of a children’s toy with the caption “Introducing the new KIRN MeeGroove”. Although these may appear to be lighthearted quips on the surface, the reality is by trademarking the name KIRN, Peter will have to file an opposition to be able to use his own name in a hardware synth industry he’s already a part of. 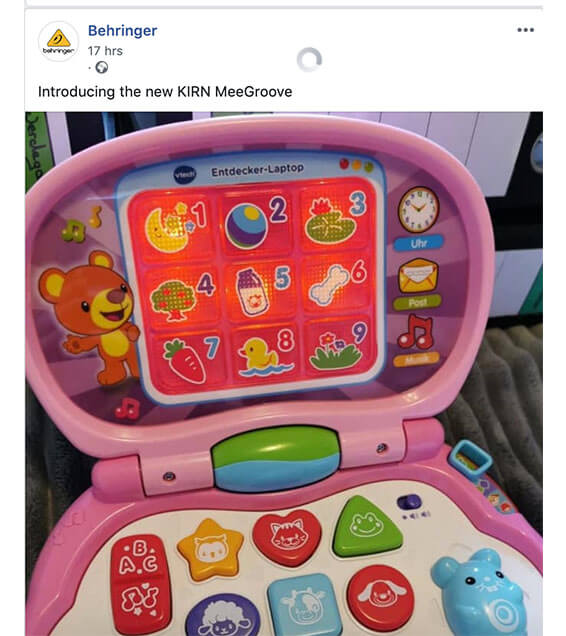 Another Facebook post, on 16 February 2020, appears to mark where the mockery began. The post depicts a cardboard cutout of a piano, captioned, “We’re proud to introduce our first KIRN Synth”. 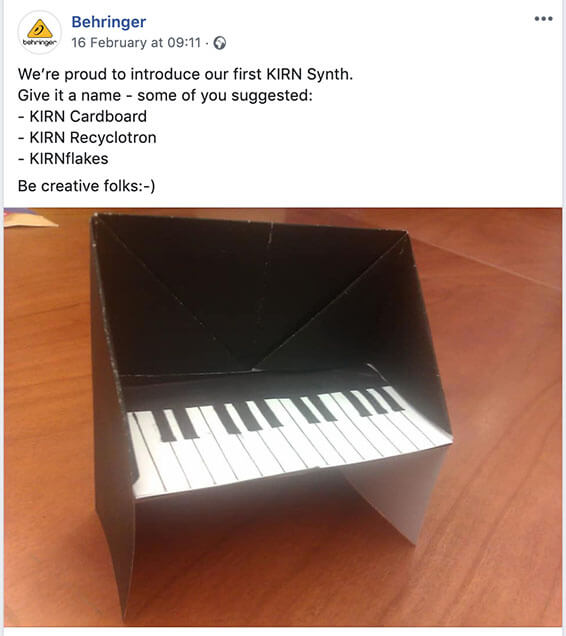 This is not the first time Music Tribe has gone after its critics, though this may be its most unusual attempt to date. The company run by Uli Behringer tried and failed to sue Dave Smith Instruments and a variety of anonymous forum posters for $250,000 in a recent defamation case.

The company’s marketing campaigns have been regarded as bizarre at the best of times. But what kind of precedent does this set for the future of Behringer and, indeed, other music technology journalists?

This page will be updated as more information becomes available.