AirTags, Podcast subscriptions and a new version of Apple TV arrive, too. 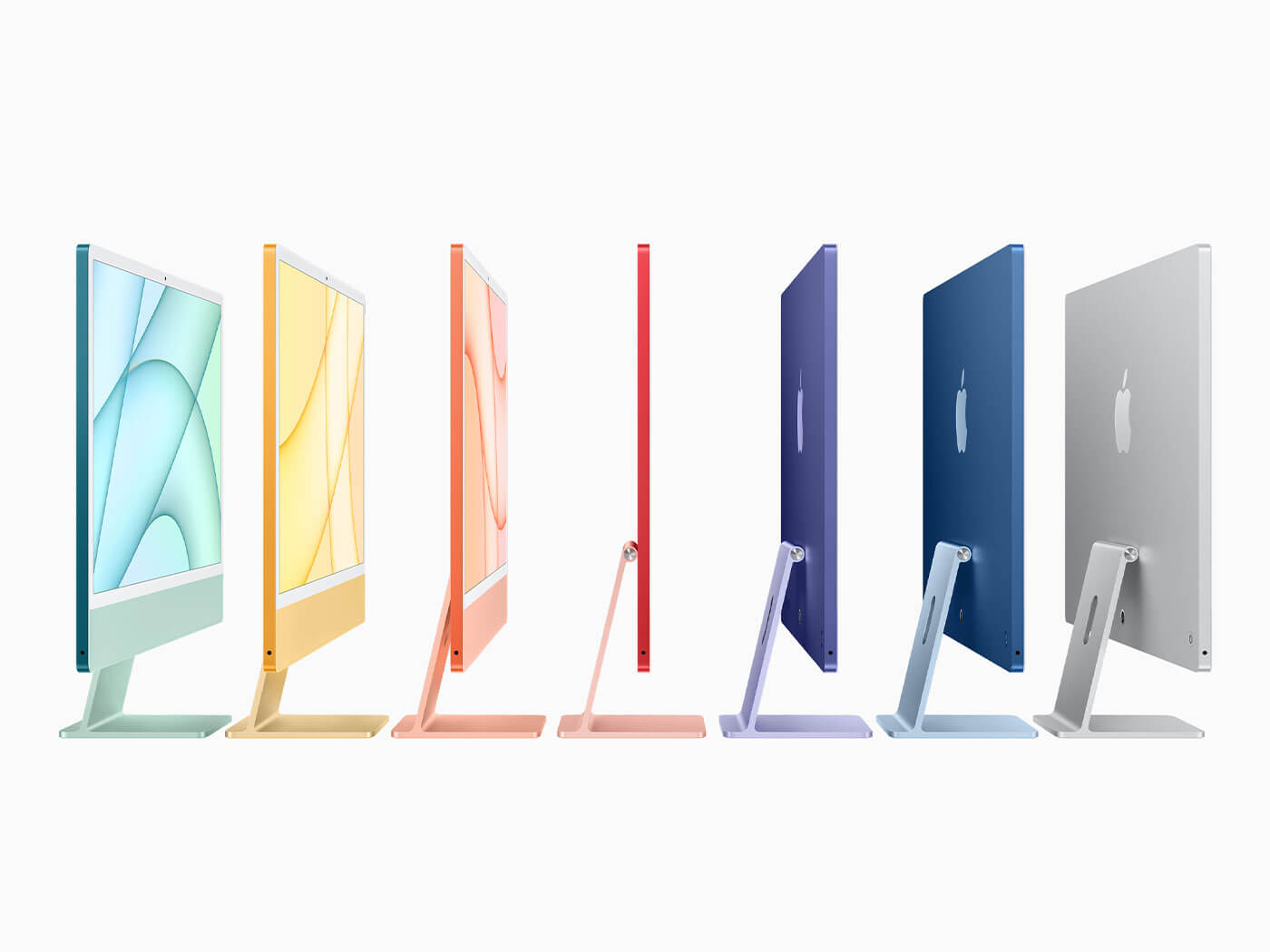 2021’s first Apple event saw the tech giant unveil quite a few new products that could be extremely useful to music producers and listeners. This includes a new M1 iMac and M1 iPad Pro, ramping up the power compared to their predecessors, which may prove vital in the studio. AirTags arrive, and a new Podcasts premium subscription service comes with an improved Podcasts app.

The new 24-inch iMac range may be as powerful as it is colourful. Available in seven different colours, the M1-equipped iMac is touted as having “the best audio ever in a Mac”, thanks to a six-speaker sound system. 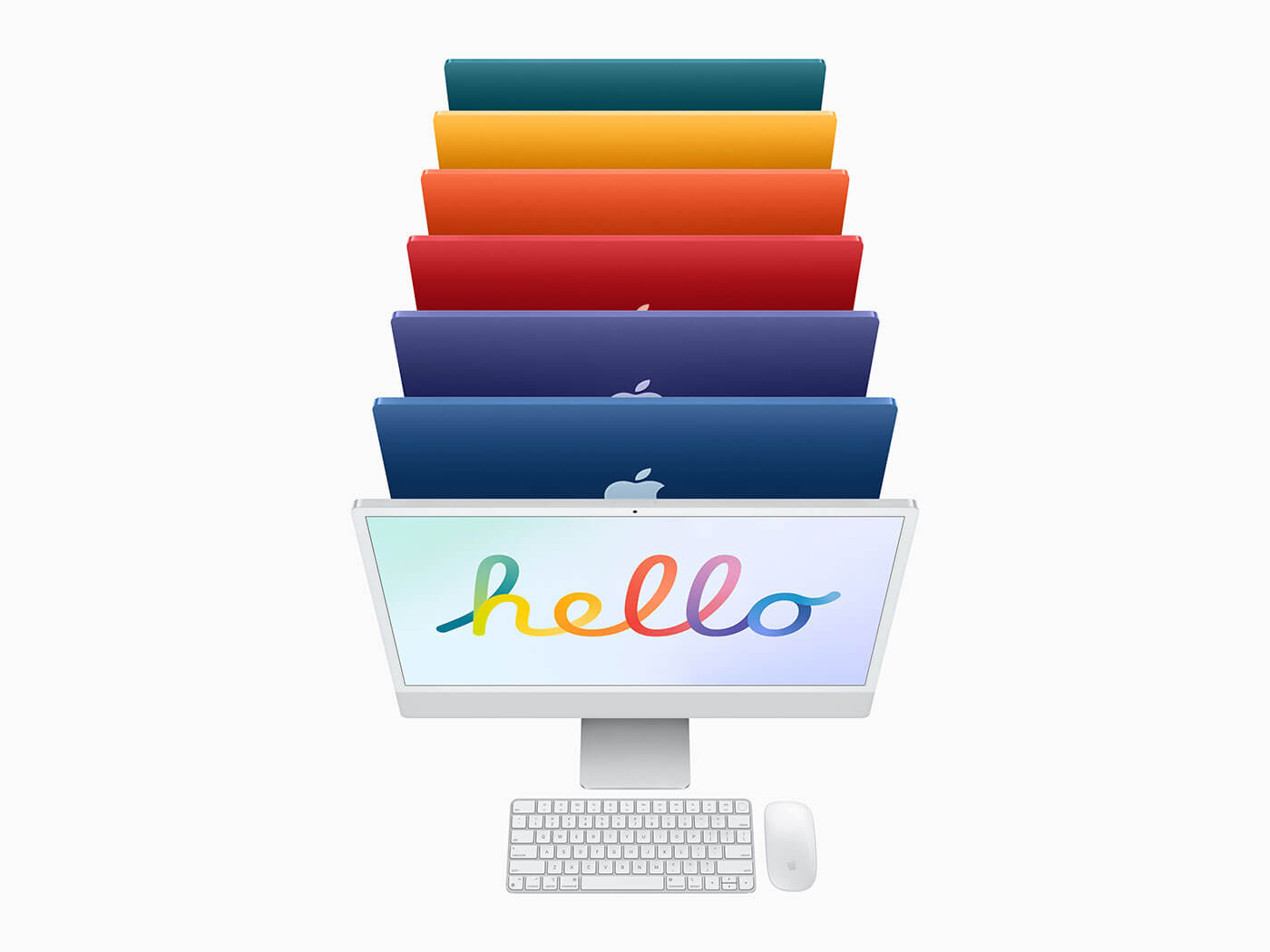 According to Apple, two pairs of force-cancelling woofers reduce unintended vibrations while delivering an “impressive bass response”. A high-performance tweeter complements each pair of woofers, which the brand says results in articulate bass frequencies and pristine mids and highs.

Combine this sound system with Apple’s advanced algorithm, and you’ll get an iMac capable of providing spatial audio when playing video with Dolby Atmos.

A new studio-quality three-mic array is onboard for clear voice calls and recordings. The mics use directional beamforming to hone in on your voice and reduce background noise and are positioned to reduce feedback.

The M1 chip is the main star here. An 8-core CPU features the fastest CPU core in low-power silicon and an impressive 8-core GPU. There’s also a 16-core Apple Neural Engine for machine learning apps. This amounts to an 85 per cent faster CPU performance compared to standard models of the 21.5-inch iMac. 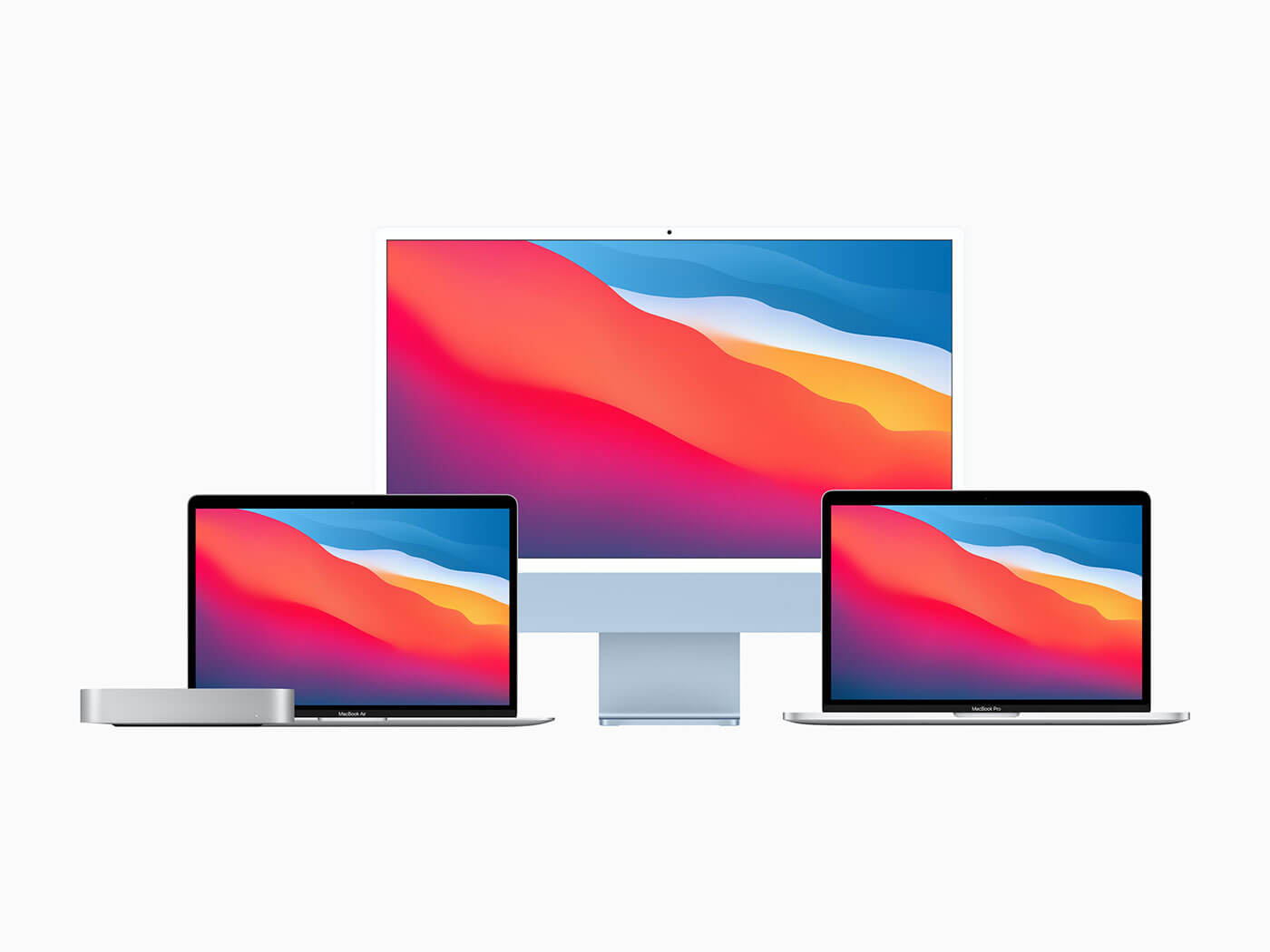 Apple says that the power of the M1 chip helps the iMac provide “the ultimate macOS Big Sur experience”. This includes faster app launching speeds, the ability to cope with demanding workloads and faster performance of everyday tasks. It also makes the most of the 4.5K Retina display, with all its 11.3 million pixels.

Although we didn’t see the true return of the MagSafe port, the power cable does attach magnetically and is a woven two-meter long woven cable. Four USB-C ports are housed on the back, including two Thunderbolt ports for speedy data transfers and support for a 6K display.

Apple’s new M1-equipped iPad Pro is 12.9 inches and is now compatible with 5G. The brand says that this all makes the iPad Pro the fastest device of its kind, pushing the limits of what an iPad can do.

The tablet now supports Thunderbolt and USB 4 connectivity for a bandwidth of up to 40gbps. High-performance accessories, such as audio interfaces and faster external storage, will benefit from this. 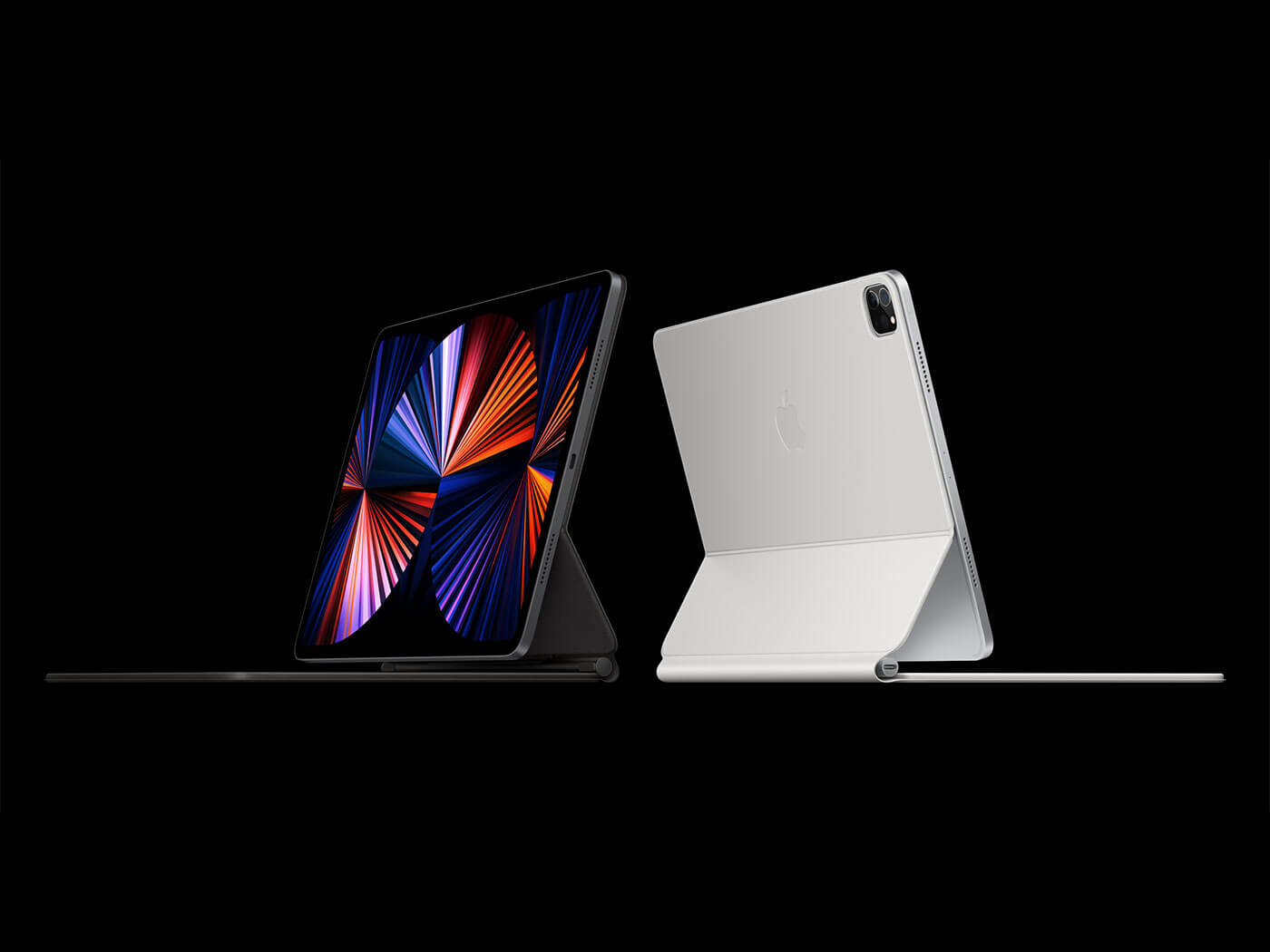 The power of the M1 chip should make music-making a breeze, without any compromises when multiple music apps are running simultaneously. Apple has kept rather quiet about its performance of music production tasks, focusing more on video capturing and editing. We hope to see some tests come through soon so we can realise its power.

We’ve all lost our keys or our bags at some point in our lives. It’s made much worse when that’s the key to a touring van or a bag with a laptop in. Apple seeks to help in these situations with AirTag, a small disc that attaches to an item. You can then use the Find My feature on other Apple devices to locate them.

The Find My app will show you the current or last known location of an AirTag on a map. If an AirTag is within range of Bluetooth, the app can play a sound from the AirTag to help you find it. The Precision Finding for iPhone 11 and iPhone 12 users is made possible with the AirTag’s U1 chip using Ultra Wideband technology. Communication within the Find My network is end-to-end encrypted to ensure privacy and security.

Apple Podcasts is getting a revamp, with a premium subscription tier that offers new experiences from their favourite creators.

Listeners are not required to subscribe to the service to continue listening to podcasts for free. The premium tier unlocks ad-free listening, additional content and exclusive access to new series, among other benefits. 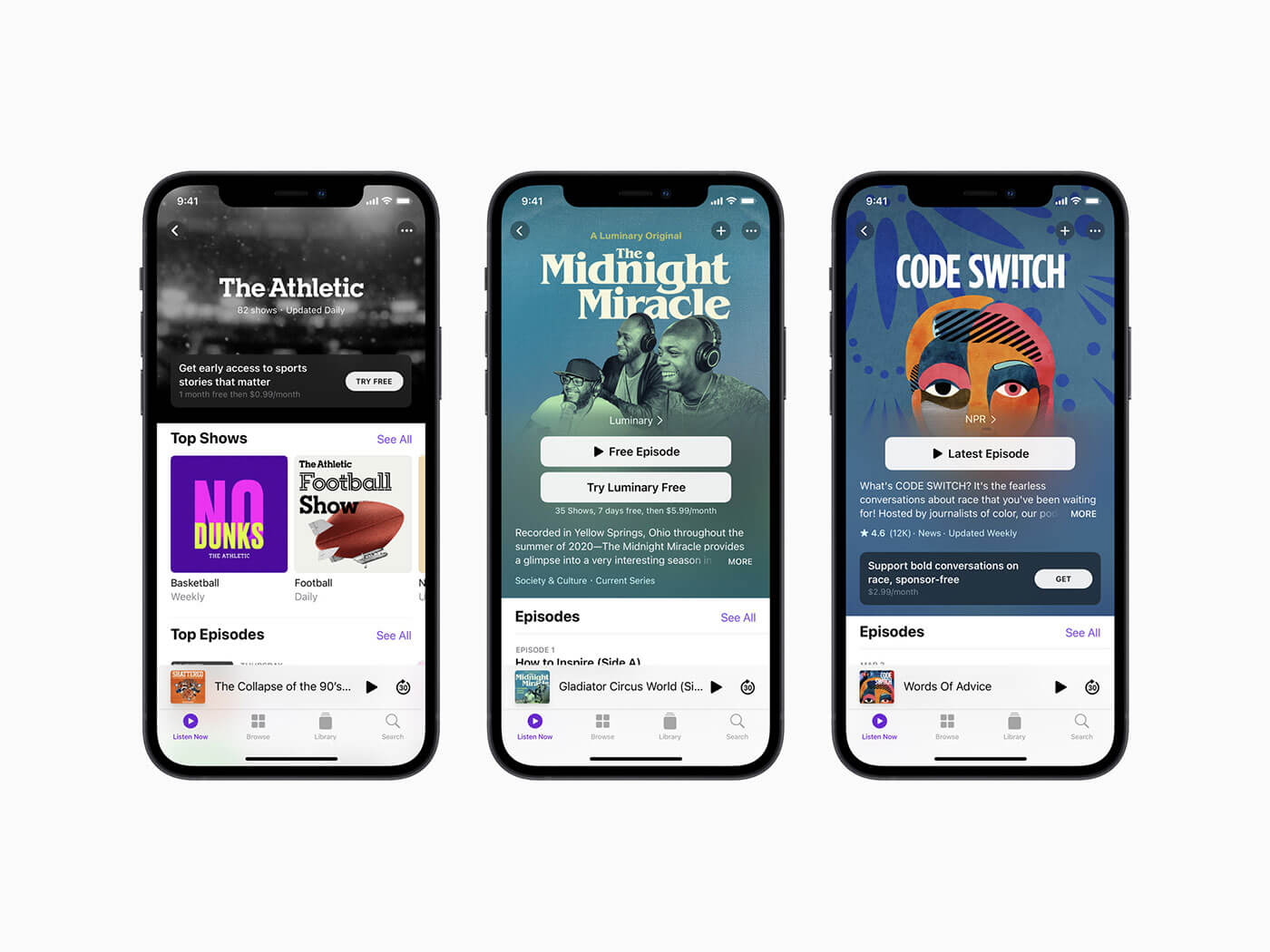 A redesigned Apple Podcasts app will come with iOS 14.5, with enhanced search options and new channels. Channels will be groups of shows curated by creators where users can explore new podcasts and content.