Review: Apple M1 MacBook Pro – The production workhorse you need to get

Could the first laptop using Apple Silicon be your next production machine, or does it just offer a glimpse of something better beyond the horizon? 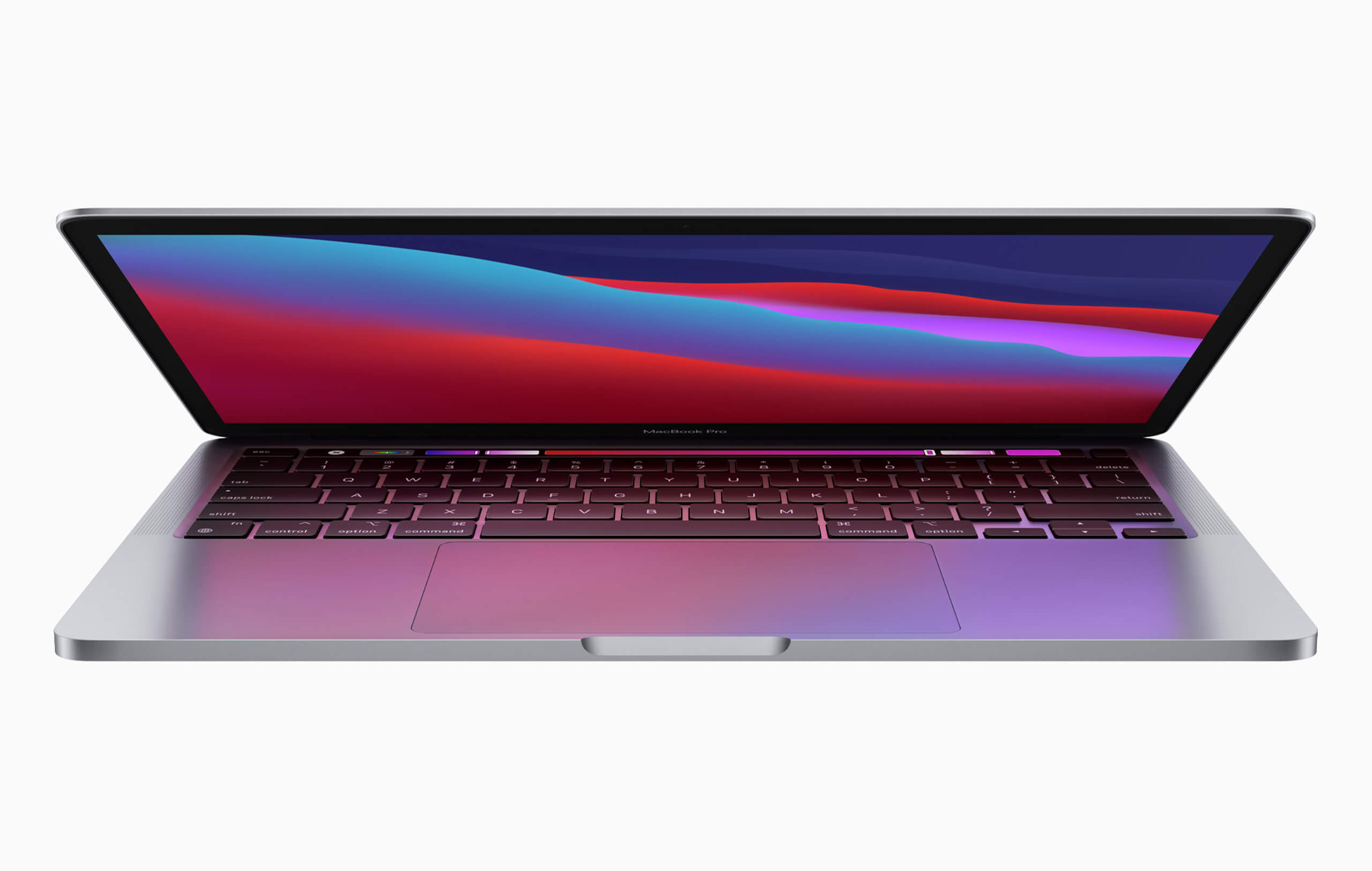 There’s always a buzz of excitement and anticipation around Apple product launches. Consumers and commentators are quick to question the legitimacy of the Cupertino tech titan’s latest claims. ‘Is it really that much better than the last one?’ But, with the introduction of the Apple Silicon M1 chip in the latest generation of MacBook Pros and Mac Minis, more heads have turned than usual. Rather than a mere upgrade, Apple has called its new CPU a breakthrough. It’s a bold statement. We got our hands on a 13-inch M1 MacBook Pro with 16GB RAM and 1TB storage and, as music-makers, we might be convinced.

We’re comparing the performance of the M1 MacBook Pro to two other Mac laptops. The first is a 2019 MacBook Air with 8GB RAM, 1.6GHz Dual-Core Intel Core i5 and 250GB memory. The second is a MacBook Pro 2018, with 16GB RAM, 2.6 GHz 6-Core i7, and a 500GB SSD. The Air is suitable for everyday use and the handling of smaller musical projects; the Pro geared towards more strenuous applications. These comparisons show how mighty the M1 MacBook Pro is.

The inner workings of the M1 MacBook might be new, but its aesthetics are very familiar. It sports the Touch Bar, a divisive feature that is reportedly being discontinued in upcoming models. Coming from a laptop without a Touch Bar, this is slightly jarring. But the Bar’s integration with Logic Pro 10.6 gives you quick access to parameters. Even if the tactility is minimal, it’s a relief not to have to click and drag faders if you’re working without hardware.

Its speakers are fine for general media playback. They go as loud as laptop speakers should go and have the expected low-end-lacking response. As a producer, you’ll likely be plugged into an interface or headphones anyway, which is achieved via the two Thunderbolt 3 ports on the left and a headphone output on the right.

There are no two ways about this: two ports are not enough for pro users, especially since Thunderbolt ports double as charging ports. This design choice makes a USB hub a necessity. However, there are rumours that a new line of 2021 MacBooks will revive the MagSafe charger connector and expand on USB ports, which we’d wholeheartedly welcome.

You’d expect that opting for a MacBook Pro over a MacBook Air would give you more power and connectivity. However, the differences between the two models are slim. The M1 MacBook Air comes without a fan and Touch Bar, and has a slightly lower-spec screen and a shorter battery life. The battery life of the Pro is remarkable and lives up to Apple’s 17-hour claim. We are regularly surprised to open it up and see how little battery has drained.

The fan in the MacBook Pro is important, of course. Though the laptop boasts rapid performance, it needs a boost for big tasks such as rendering large audio and video projects. That’s when the fan kicks in, cooling the MacBook Pro to allow it to feed power-hungry tasks for longer periods. Most of the time, though, it performs perfectly well without the fan.

In general, the M1 MacBook is lightning-quick. Apps and websites load in a flash and Logic Pro 10.6, optimised for Apple Silicon, runs like a dream. Projects and stock plug-ins open almost instantly, and audio-editing functions execute promptly.

Apple promised that, with the M1 chip, Logic Pro could run a boatload of plug-ins. Using the Logic Benchmark Test created by music-prod.com, we have Logic playing back 104 instances of Sculpture with a signal chain of Channel EQ, Multiplier, Chorus, AutoFilter and PlatinumVerb. The 2019 MacBook Air can play back only 13 channels in this configuration, while the 2018 MacBook Pro plays back 66. It’s clear, then, that native Logic Pro effects are much more at home on the M1.

Arturia’s OB-Xa V, a particularly CPU-hungry soft-synth, can be loaded onto 30 channels playing eight-note chords on the ACD-3 Slower Strings preset. Meanwhile, the MacBook Air can play just two instances of the same patch, with the MacBook Pro 2018 managing 22. We load in Arturia’s Piano V 2, a powerful physical-modelling instrument, of which the M1 can load nine concurrent instances. The MacBook Air manages three and the 2018 MacBook does 12.

We didn’t expect the 2018 MacBook Pro to outperform the M1 in any environment, so it’s fascinating to see it do so well with Piano V 2 and Ableton Live 10. Arturia says that its software is yet to be tested and configured for Apple Silicon, which proves that Rosetta 2 is capable of running unsupported plug-ins and apps. And, once developers port over to the new architecture, we should expect greater performance improvements.

We want to try Kontakt-based instruments on the M1 but, at the time of writing, Native Instruments is yet to catch up with Apple. Any big orchestral instrument libraries using Kontakt as a host, then, are a no-go right now. For the most part, Rosetta 2 is convincing in its hosting of incompatible software. Venerable soft-synths such as U-He Diva and Sylenth1 run with almost no issues. Interestingly, some VST3 plug-ins would crash Ableton Live and Logic Pro X but run fine as AU plug-ins. Early adopters should opt for the latter format wherever possible.

Multi-tasking is a breeze on the M1. When working in an Ableton Live project, apps such as Adobe Photoshop are running smoothly in the background without us even noticing.

Finally, iPhone and iPad app integration is a cool feature, but few desirable apps are available. Reason compact doesn’t work, and there are no apps from Korg, such as Kaossilator or Korg Gadget. Fortunately, Moog has recently made the Model 15 app available on Big Sur. We should see more enter the fray soon, which could give rise to more affordable desktop software.

Should you buy an M1 MacBook Pro?

Despite it being a blisteringly fast machine, we’re not convinced that the M1 MacBook Pro is exactly tailored for music professionals. An M1 MacBook Air has similar specs, the only noticeable difference to music producers is the fan’s omission. We’ve heard that the MacBook Air is a powerful laptop, with many glad they went with it over the Pro. If you often render big projects, the Pro might give you a helping hand here. Still, two connection ports – one if you’re charging without a special adaptor – seems feeble given how many peripherals we regularly hook up to our laptops.

If you need a new laptop right now and are considering an M1 MacBook for its performance, go for it. Just be aware that some significant plug-ins are not yet compatible. You won’t be disappointed by its speed and battery life. If you can hold out for a little longer, we advise waiting for the next release of MacBooks. By that time, brands such as Native Instruments and DAW developers will have hopefully caught up with the tech, and the next line of M1 (or M2) products will likely be even more impressive. Rumour has it that a 14-inch and 16-inch are on the horizon, with the aforementioned MagSafe charger and a 12-core CPU.

Apple’s M1 MacBook Pro is a sign of things to come. By ramping up efficiency with the SoC technology, the package performs far better than the RAM or CPU specs would suggest. The 16GB RAM in the M1 means more than it does in Apple’s predecessors, thanks to Apple’s Unified Memory Architecture. Considering how maxed-out Mac Pro tower computers perform these days, it’s exciting to think about their potential performance when equipped with SoC tech, too. But the best news for new customers? Apple hasn’t hiked up the price in light of these new developments.