How to make hip-hop and R&B beats like Timbaland 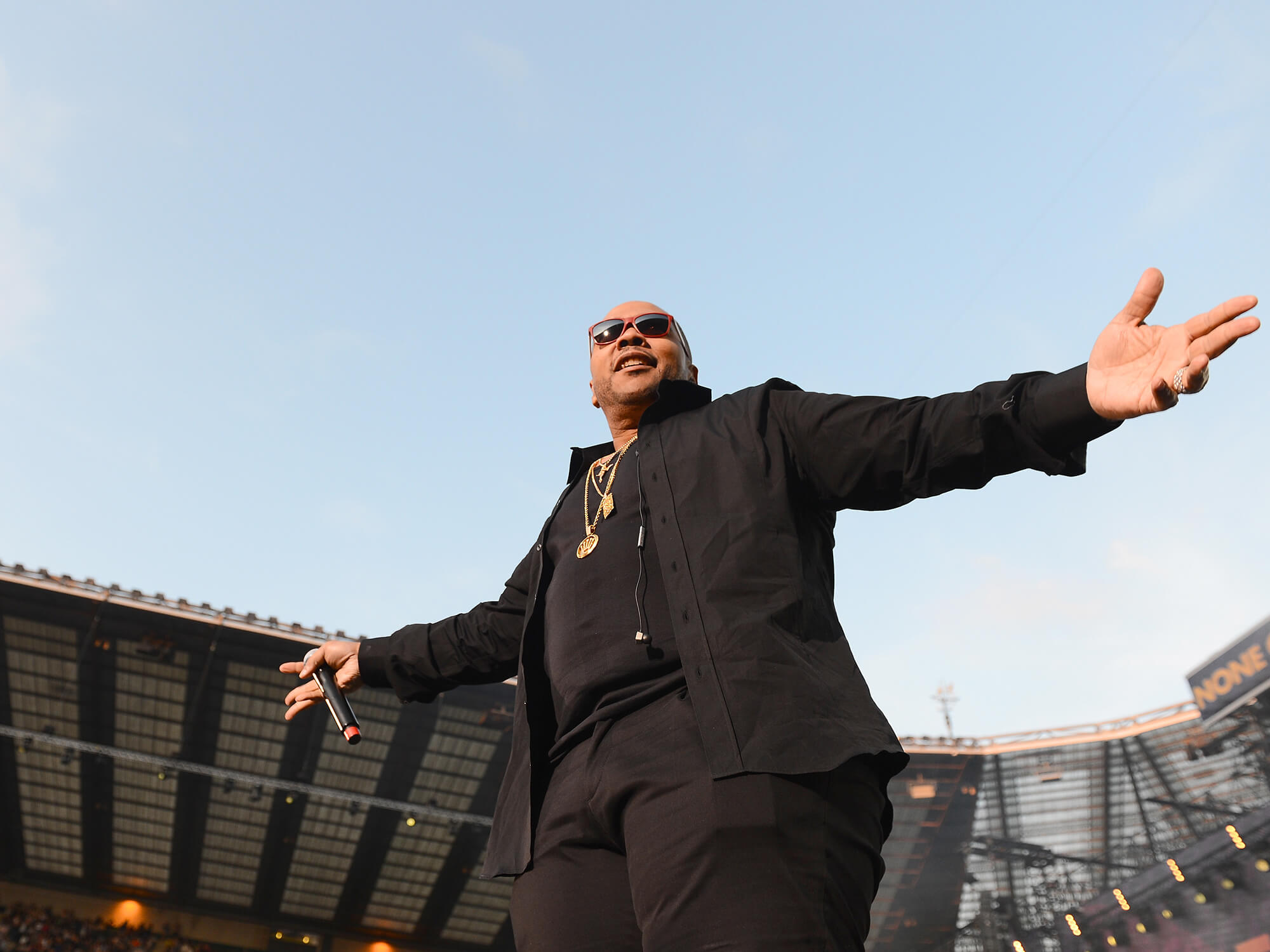 Widely considered as one of the greatest beatmakers and producers in the game today, Timbaland is the Grammy award-winning mastermind behind some of the biggest-selling hip-hop, R&B and pop music records of all time. Having worked with a who’s who of A-list artists including Beyoncé, Nelly Furtado, Aaliyah, Missy Elliott, Madonna, Jay-Z and Justin Timberlake, it’s a certainty that you’ve heard at least some of Tim’s work on the buttons, even if you’ve not dipped into any of his three solo albums.

Timbaland’s trademark style is heavily based upon the slicing, sequencing and manipulation of samples to create a unique groove and feel that has been influential not only in the world of hip-hop, but within other genres. Originally an Akai MPC user, Timbaland now uses Ableton Live with a Push 2 controller to create his music.

In this feature, we’ll be breaking down how Timbaland makes various components of his beats, including his drums and musical loops, so that you can follow along from the comfort of your own studio. We’re using Ableton Live for this, but you can achieve the same results with any other DAW.

Part of what gives Timbaland’s beats their own unique bounce is the fact that he plays all of the parts live to a metronome using a drum pad controller, before making any edits that are required to tighten up the recordings afterwards. So, after setting the BPM to 90, we lay down a basic hi-hat groove using a MIDI controller to trigger a factory 808 hat in Ableton.

After making any necessary edits, turn your attention to the kick drum. After calling up a heavy kick from Live’s Datai drum kit, we record a kick pattern over four bars with some subtle variations to keep things sounding interesting. The kick pattern is particularly important, as this will dictate how the bass works later on.

We then record a clap part to compliment the hat and kick, with two extra bits of percussion taken from the Percussion Core Kit to give a sense of depth and detail to the drum track.

An important point to remember when making beats this way is to not over edit or tighten up the recordings you’ve made. If you go too far with this, you’ll end up making the finished beat sound too rigid. This applies equally whether you’re looking to make Timbaland-style drums or any other kind of hip-hop/R&B beats. As long as it doesn’t sound too wonky or obviously out of time, you’re on the right path.

Timbaland typically uses samples as the backbone of the musical elements in his tracks. While Tim typically lifts his sounds from sources like old records, material from his previous sessions, or loops made for him specifically by sound designers, we choose instead to dip into the Bandlab Sounds archive to grab some top-tier source material.

We take two electric piano loops from The Phronetic’s hip-hop pack as a starting point, then sliced the HopefulKeys loop into a drum rack using the transients as a guide. This slices each hit of the loop onto a separate pad, allowing me to replay it in a pattern of our choice. To make things more interesting, we reverse slice 14 in the drum rack, giving us a long reverse chord to add into the mix.

Next, we load up the second loop (LullabyKeys), change the warp mode to complex and pitch it up one octave. After this is consolidated into a new loop, we slice it up into a drum rack. This gives me a contrasting set of keys that can be played over the first musical part to add extra detail to the piece as a whole.

Once we’ve recorded in a suitable loop, the final step to glue both parts together is to add a splash of effects processing. We add an amp simulator preset from XLN Audio’s RC-20 Retro Color to the second key loop to shift the tone away from the first loop, then group both channels together with a Valhalla Plate reverb to give the musical parts a dreamier, lusher sound.

The venerable Roland TR-808 bass is a staple for many hip-hop beatmakers, including Timbaland. You can sample an 808 bass drum hit, but it’s simple to make your own using pretty much any synth, so let’s run through how it’s done using Native Instruments’ Massive.

First, we set the oscillator wavetable to Sin-Square, with the mix set to mostly sine waves. This gives the bass raw weight and power, while adding a few harmonics for a more driven tone. Then, pitch the oscillator down by two octaves, and use envelope 1 to modulate the oscillator pitch up by three octaves. Setting a fast attack time with slightly slower decay gives me that trademark 808 style attack.

A sampled TR-808 bass drum has a tail that decays into silence after the initial attack. This is part of the sound’s character, but if you synthesize your own 808 bass, you can make the tail fatter and louder than the original sound. This creates a great combination of the 808 chest-thumping attack with the sustained weight of a sub-bass. We do this by pushing the amp envelope decay time and level up to their maximum.

There are a few things you can do to make the sound behave more like a triggered sample. First, enable the oscillator phase restart, which makes the oscillator start from the beginning of the waveform every time a note is played. After this, set the voicing to monorotate to stop bass notes from overlapping and to eliminate unpleasant clicks. Finally, set the trigger mode to legato, with the oscillator glide time at around 1 o’clock, allowing you to glide between notes in a similar vein to the basslines in many hip-hop, trap and drill beats.

Besides using his DAW’s built-in drum rack and sampler, Timbaland is also a known Serato Sample user. We use Sample to lay down some trademark vocal chops in a similar style to those used by the man himself in tracks such as Oops (Oh My) by Tweet.

To kick off, we grab a pre-made vocal chop loop (Night Drive) from Bandlab Sounds, then drop it into Sample. Upon auditioning the loop, we found three identical chops, and so placed a cue point on each one. The first and third are the same pitch, while the second one is pitched down by two semitones. As all three chops are quite short, we timestretch them to -75 per cent which not only makes the vocal chops longer, but also adds some pleasant-sounding artefacts. After this, we pitch the third sample down by -7 semitones, giving us a run of notes that we can play a simple melody with.

We play a simple vocal chop line using the three samples, taking care to make sure that it complemented what we’ve already laid down in the track without it sounding too busy or cluttered.

To finish this sound off, we first add Soundtoys Effect Rack’s Color Vocal Chain preset to give the vocals a washed-out, spacious feel, before using EQ to roll some of the high and low frequencies off, making the chops fit into the mix more effectively.

Now that we’ve laid down the parts of the beat, we can look at how processing gets us closer to the Timbaland sound. He’s known to drive his channels hard in Ableton Live to add an amount of soft clipping, then pulls the master fader down to avoid any overs on the main output. A similar effect can be achieved with more conventional gain structuring by using a clipping plugin instead, and so we call up Voxengo’s OVC-128 on the kick and clap.

On the kick, we add 10dB of input gain, before setting the output gain to -6dB to keep the volume levels balanced. In the video, you’ll hear the difference this makes to the tone of the kick, which now has an additional crunchy feel.

Meanwhile, we use the same input gain amount for the clap, with the output level at -7dB to keep the levels in check. After this, a smaller amount of clipping courtesy of SIR Audio Tools’ StandardCLIP on the main drums bus helps to blunt the attacks of the hats and percussion, without crushing the drums excessively.

The final result has a very similar vibe to a Timbaland beat, with the crunchy kick and snare punching through the mix. The low bass underpins the track without detracting from the chopped keys and vocal slices. This goes to show that anyone can create high-grade hip-hop or R&B beats using just their DAW, a killer selection of samples and the right skills.