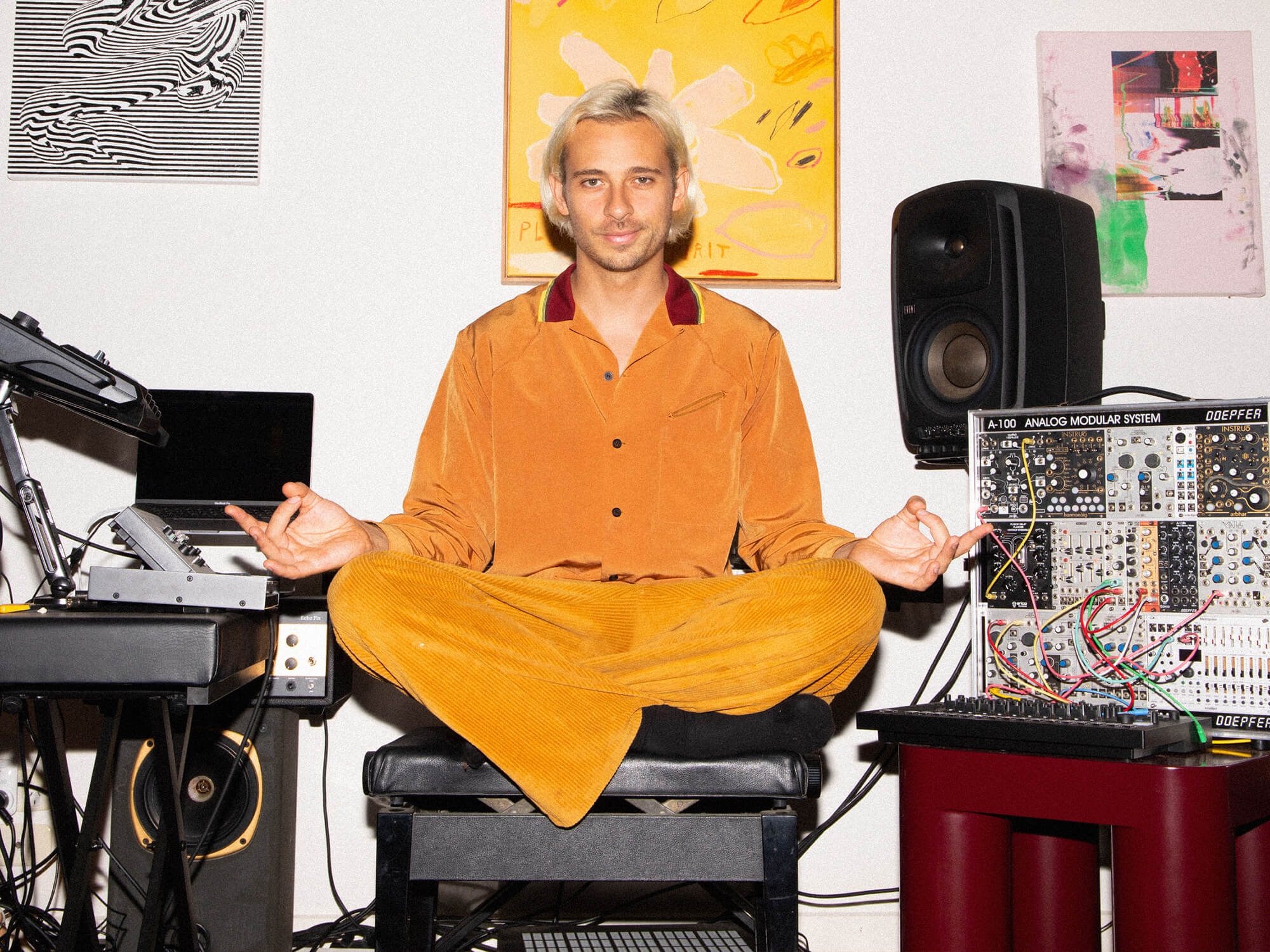 How to create heavy beats and gritty synths like Flume

We dissect the sound design techniques the Aussie producer used on his euphoric third album, Palaces.

Leftfield producer Flume is widely considered one of Australia’s finest musical exports. Real name Harley Streten, Flume has been active in the electronic music scene for about 10 years, having released three albums and a mixtape, plus a slew of high-profile remixes for artists such as Lorde, Disclosure and Sam Smith.

While Flume’s self-titled debut album thrust him into the spotlight in 2012, he learnt the basics of music technology in a similarly humble way to prominent UK grime artists Skepta and Wiley. His first forays into music came courtesy of the classic PlayStation production game Music 2000, and the PC-based software Ejay, which he used to sculpt his earliest beats.

More recently, Flume flexed his substantial skills across his most recent record. Palaces features a rich palette of textures drawn from his growing modular hardware collection, as well as field recordings of his surroundings, which provide the album’s sonic narrative.

In this tutorial, we deconstruct some of the techniques used on Palaces to help you get under the skin of what makes the Grammy-winner’s sound so distinctive, before teaching you how to apply those same methods in your own studio.

Let’s kick off by constructing drums similar to those on the track Sirens. The contrast between the distorted kick and clean, bright rimshot is typical of Flume’s production style, and something you can achieve easily in-the-box. Start by setting your DAW’s BPM to 70 and reach for a 909-sounding kick drum.

After arranging the kick over four bars into a simple two-step style pattern, add some distortion. We’ve opted for Vertigo’s VSM-3 here. You want to make the kick drum sound distorted and squashed without completely decimating it, so increase the input gain to about 7dB, while boosting the drive to 50 per cent until your kick has the right amount of crunch.

The kick in Sirens is layered with a clean-sounding cymbal – we grabbed one from the United Pop Neo Soul kit in XLN Audio’s Addictive Drums 2 but you can use any cymbal sample that feels appropriate. Arrange and layer your cymbals over the kick drum.

Next, grab a rimshot sample and place it on beats two and four of every bar. In Flume’s drum track, there’s a heavily squashed live-sounding snare layer underneath the rimshot. Create your own take on that by calling up a live snare with a fat smash of parallel compression, alongside saturation from a plug-in such as Soundtoys’ Decapitator, rounding off the transient and bringing up the tail.

Now, let’s look at how to craft your own take on the Sirens’ percussive lead synth.

We’ve used Xfer’s Serum here, a stellar choice for making sounds of this type thanks to its built-in FM synthesis and wide choice of wavetables. You could also use a free wavetable and FM synth such as Vital. The key to making synth sounds such as this is to adjust the amp envelope’s decay, sustain and release to make things short and tight. Try a decay time of about 400ms, no sustain and a short, 15ms release.

We’ve gone with the Debussy waveform for Oscillator A. It has a slightly metallic tone ideal for the sound we’re making. Set the wavetable position to 80, then dial in about 40 per cent FM from Oscillator B. After increasing the unison voices to 2, turn Oscillator B’s level to 0 and pick the Prime wavetable, pitched up by 2 octaves. This frequency modulation should provide the tone you’re after.

To give the patch a sense of space, add a dash of short plate reverb from Serum’s FX panel or another reverb plug-in. Use an auto-panning effect – we’ve gone for Soundtoys’ PanMan – to make the lead line move around the stereo spread in a similar way to Flume’s sound.

Finally, mimic the irregular timing of the original sound by automating your DAW’s MIDI arpeggiator rate. By setting the rate to milliseconds rather than syncing it to the grid, you’re able to make the arpeggiator play a suitably unusual rhythm.

Let’s make a pad that echoes that in Flume’s track Get U. We’ve plumped for u-He’s Diva for this sound, as it boasts a warm, rounded analogue tone well suited to replicating the Get U pad, but any virtual analogue synthesizer should do the trick here.

After dropping a suitable chord progression onto the MIDI channel, open your virtual analogue synth and set Oscillators 1 and 2 to a square wave, with oscillator 2’s volume at 75 per cent. Add a bit of detuning to Oscillator 2 (we went for 0.3) to thicken the sound without making it overly dissonant.

Next, drop the filter cutoff down to about 80 per cent to make the pad warmer. Increasing the resonance (labelled here as ‘emphasis’) to about 80 will give the pad a more focused tone. You can also add a touch of chorus and plate reverb to make your patch more luscious.

The pad in Get U features occasional dreamy, high-pitched notes that can be recreated with Valhalla DSP’s Shimmer on a send. After adding Shimmer – or any alternative – to a new effects channel, set the mix to fully wet, the pitch shift to 12 (one octave) and the feedback to 0.7.

Select the bigStereo reverb mode with dual-pitch and any sound routed through the effect will be pitched up by one octave. Now, set up send automation from the pad channel to send selected notes to the effect; setting Shimmer’s low cut to 300Hz will remove any low-frequency mud from the effect.

Check out our recent cover feature with Flume and you might spot the classic upright piano that takes pride of place in his studio. Sure, it’d be amazing if we one too but, until then, we can use some simple techniques to make any VST piano sound like we’ve recorded it at home – and with a similar tone to that in Jasper’s Song.

Load a suitable chord progression onto a MIDI track. For the upright piano sound, we’ve chosen Native Instruments’ The Gentleman. Turn off the piano’s reverb so that you can craft your own sense of space – try layering ambient room noise under the piano (you can use your phone to record this) so that it sounds more like it’s in your cosy living room.

To give the piano more character, add some heavy tape saturation with a little automation of the tape speed, to mimic Jasper’s Song’ wobbly modulation. Now deploy an effect like XLN Audio’s RC-20 Retro Color for more of just that: colour.

Group the piano and noise channels so that you can process them together. Use EQ filters to roll off the bass at 300Hz and highs at 9kHz, to make it sound more like an audio recording. Now use Xfer’s free OTT plug-in to apply some hard multiband compression to the entire sound, pulling up the noise in a similar way to a noisy home recording.

With these techniques, you should be able to get your synths and drums sounding just like Flume’s. However, there are other interesting facets of his studio technique that might prove useful too.

Like most producers of electronica, Flume makes heavy use of sidechain compression to give his music a sense of movement. In the video below, you’ll see that grouping some of the synths you made earlier and then sidechaining them to the kick drum will see them dramatically duck in volume. You can hear Flume do this on Sirens.

Listen carefully to Palaces and you’ll notice the many field recordings that Flume used to effectively glue the album’s tracks together. This not only lends the music a common thread but is also easy to do. Try grabbing some field recordings at home using any microphone, a Zoom recording, or even your phone.

Another Flume trick is to record long jams on his modular synth equipment before slicing them up and sampling them in his records. While not all of us have a modular rig handy, there are many software options available, including Native Instruments’ Reaktor Blocks and Cherry Audio’s Voltage Modular, which are fantastic for making unusual sounds that’ll add character to your productions.

Additionally, try making some processing chains on an effects send to run your modular chops through – this can be superb for creating distinctive sound design that makes for statement sounds.