Best freeware plug-ins: Five of the best free software and apps for DJs

You can kickstart your DJ career without splashing out on high-end software. Here’s our round-up of the best freeware DJ tools. 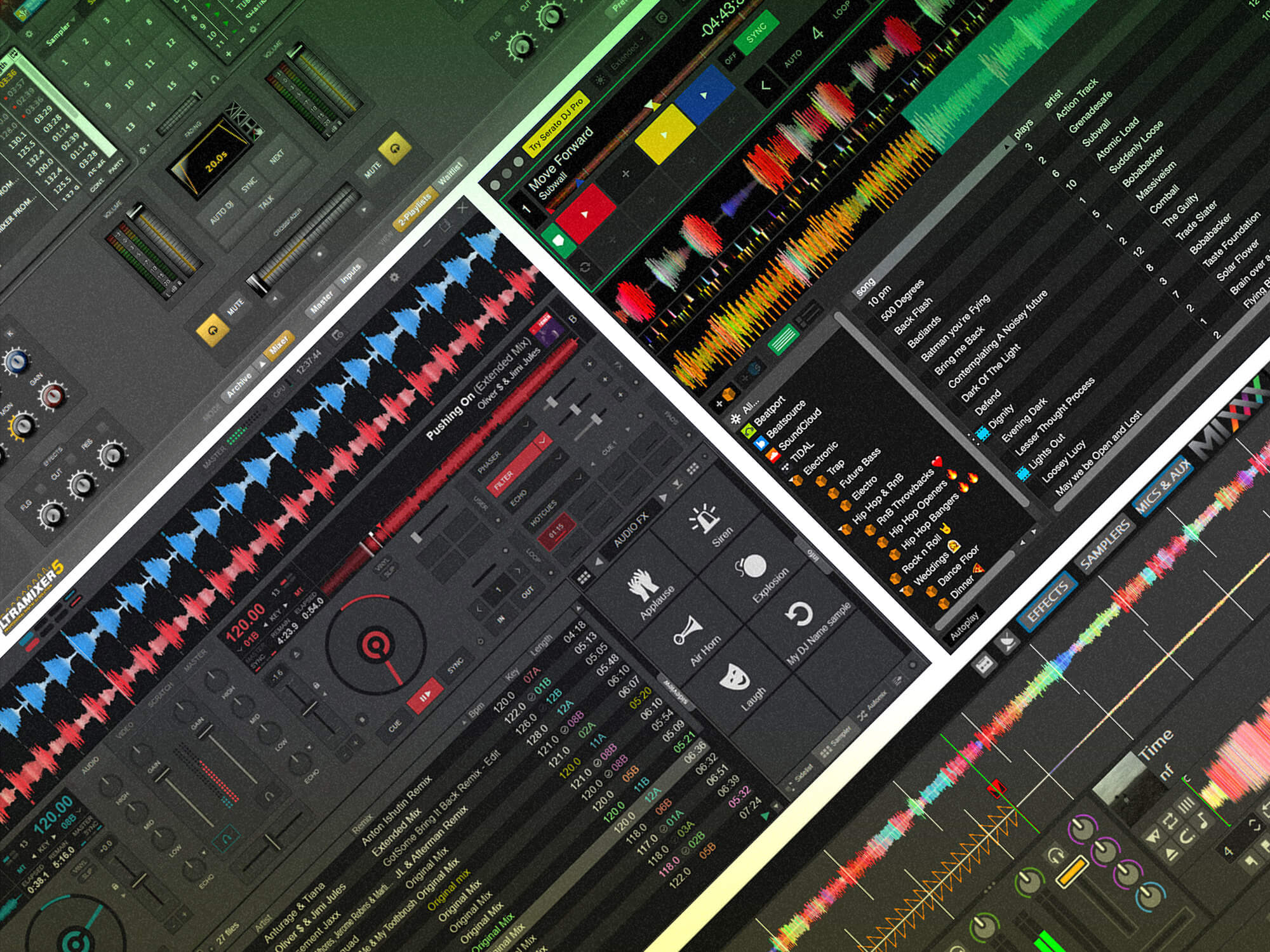 DJing has never been as accessible as it is in 2021. Instead of saving up for a pair of turntables and a mixer, you can blend tracks on your laptop for free. There’s plenty of free software available that equips you with professional features, whether you’re planning on testing out a few tracks to mix before a big gig or need an app to use with your new DJ controller. Some software is even capable of connecting streaming services, isolating stems in a track and video mixing.

We’ve rounded up some of the best free software for DJing on both Windows and macOS that will have you mixing in no time.

The best free software for DJs at a glance: 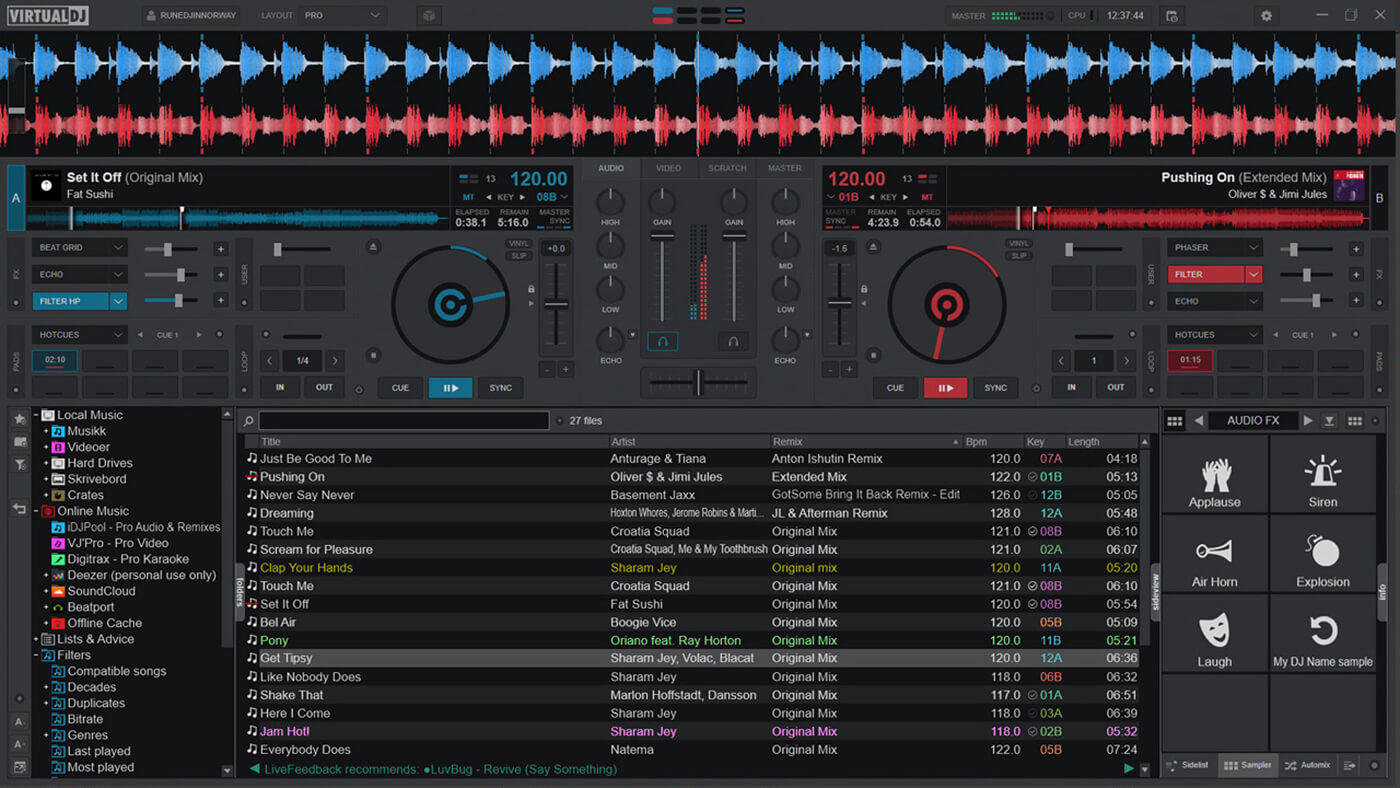 With over 100 million downloads, VirtualDJ is a fantastic choice for beginners and experienced DJs alike. The free software boasts state-of-the-art track separation, streaming platform integration, customisation and all the essentials mixing tools. You’ll have access to a bank of effects, a sampler and a library management system that offers quick searching, smart folders, playlists and more.

The real hook for Virtual DJ is the real-time stem separation technology and ModernEQ. You’re able to isolate the vocals, drums, and other instrumentation effortlessly to create on-the-fly mashups and unique transitions. Even if you prefer using a different DJ app, you need to try VirtualDJ’s stem separation and see how this technology can change the way you mix. The main downside, unfortunately, is that you’ll need to pay for a VirtualDJ License if you intend to connect a DJ controller.

– No controller support with a free license 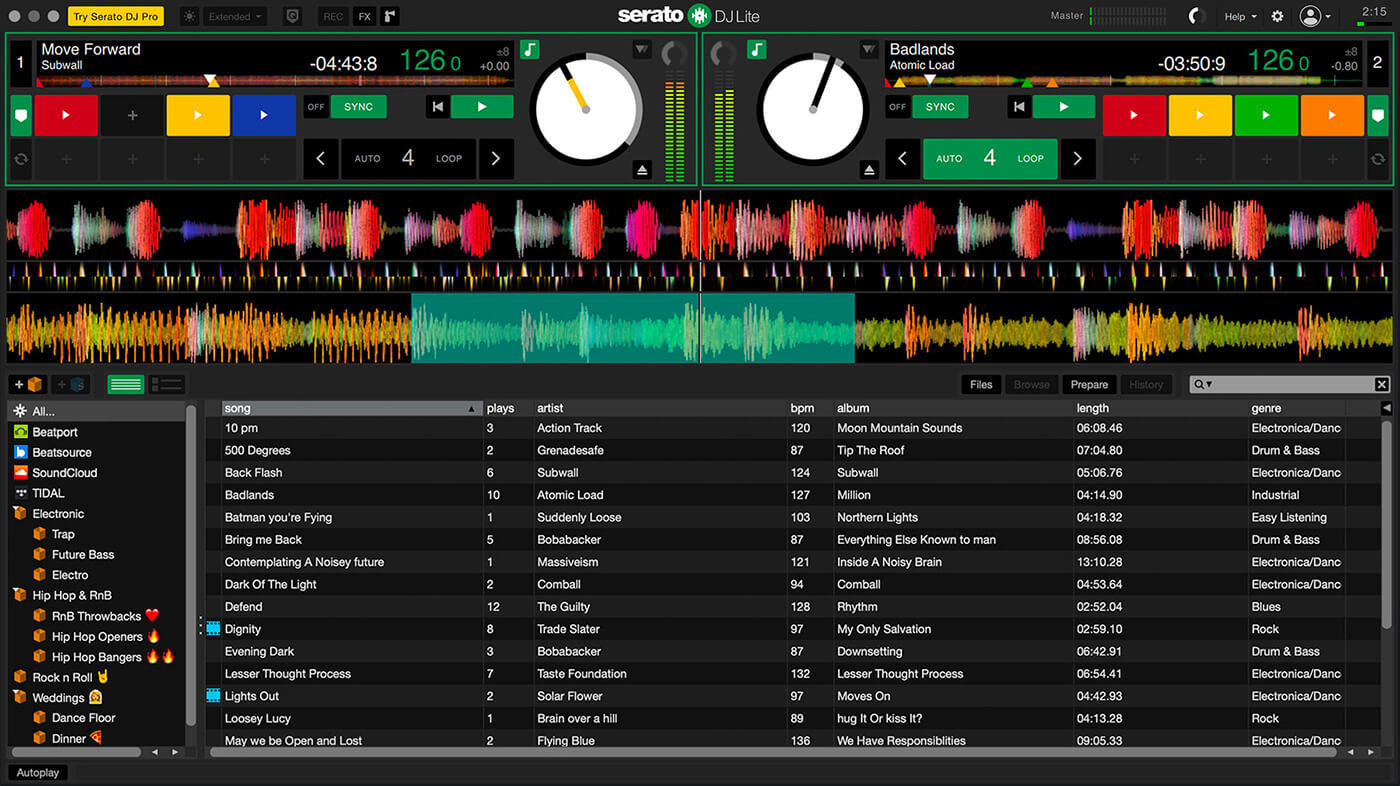 Serato DJ Lite is the stripped-back version of the brand’s leading DJ software, used by some of the best DJs in the world. Even with a slightly limited spectrum of tools, there are plenty of features included to get stuck into whether you’ve just picked up a new controller or figuring out how to mix tracks using your mouse and keyboard. You can stream and mix music from SoundCloud, Tidal, Beatport and Beatsource, and can even livestream your mixes for the world to enjoy.

If you’re just using a mouse and keyboard to mix, you’ll be able to use Serato DJ Lite in Practice Mode. This will help you learn the fundamentals of mixing and allows you to have a bit of fun with your music. To access Performance Mode, and therefore the expanded feature set, you’ll need to purchase a DJ controller that comes with a Serato DJ Lite unlock. Once you’ve got the hardware, though, the software remains free for you to use at gigs and at home.

+ Fair amount of features to get started with DJing, including cue and loop points to jump and sample slots.
+ Streaming from Beatport, SoundCloud, Tidal and Beatsource
+ Livestreaming capabilities

– You’ll need supported hardware to access filters, EQ, and effects
– Can be difficult to navigate without Performance Mode

Mixxx comes with features you might expect to be restricted to paid software. The free software gives you four decks to mix with sync, looping, pitch and key controls, and quantisation to make loops and samples in time with other songs. You can also use up to 64 sampler decks to pepper sounds over your mixes. Plus, Mixxx’s effects chains allow you to link up to three effects such as reverb, phaser and bitcrusher for creative on-the-fly sound design.

You can connect a range of DJ controllers to Mixxx, and even use timecode vinyls and CDs without having to pay the price of high-end DJ software. The software can be customised, and you can record your mixes to your computer and broadcast them using the mic input for talking to your audience.

Although the BPM detection is mostly accurate, some users have reported issues with certain tracks, which may cause complications for beginners. There are also some simple features missing, such as moving a track from one deck to the other.

– Missing some basic features
– BPM detection is not always on point 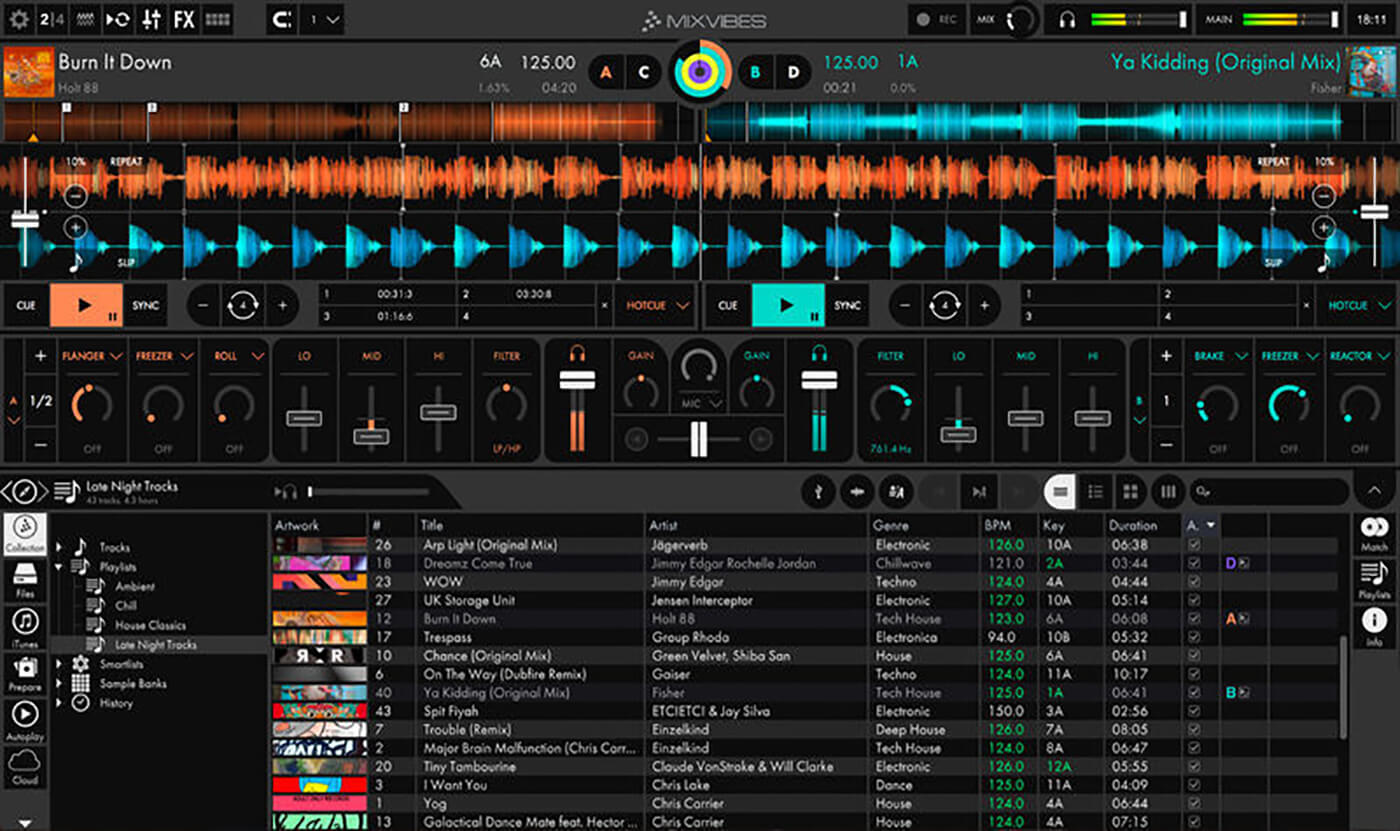 Mixvibes’ CrossDJ comes in three versions, but the free edition is surprisingly capable. It gives you two decks and three effects (echo, flanger and Chopper), two fully-featured video decks with 35 video transitions, camera integration and a titler, plus three video effects. You can record video output, though it will be watermarked in the free version

There are over 80 controllers mapped to Cross DJ, including models by Pioneer DJ, Numark, Denon DJ, and Native Instruments. You can also connect to SoundCloud for streaming tracks to the decks, and access smart playlists based on BPM, most played, recently played and more. A Match section lets you make a note of what tracks go well together, and shows a history of what tracks you’ve previously played together.

Mixvibes also makes CrossDJ Free for iOS and Android, which is a great way of getting into mixing with your mobile phone. 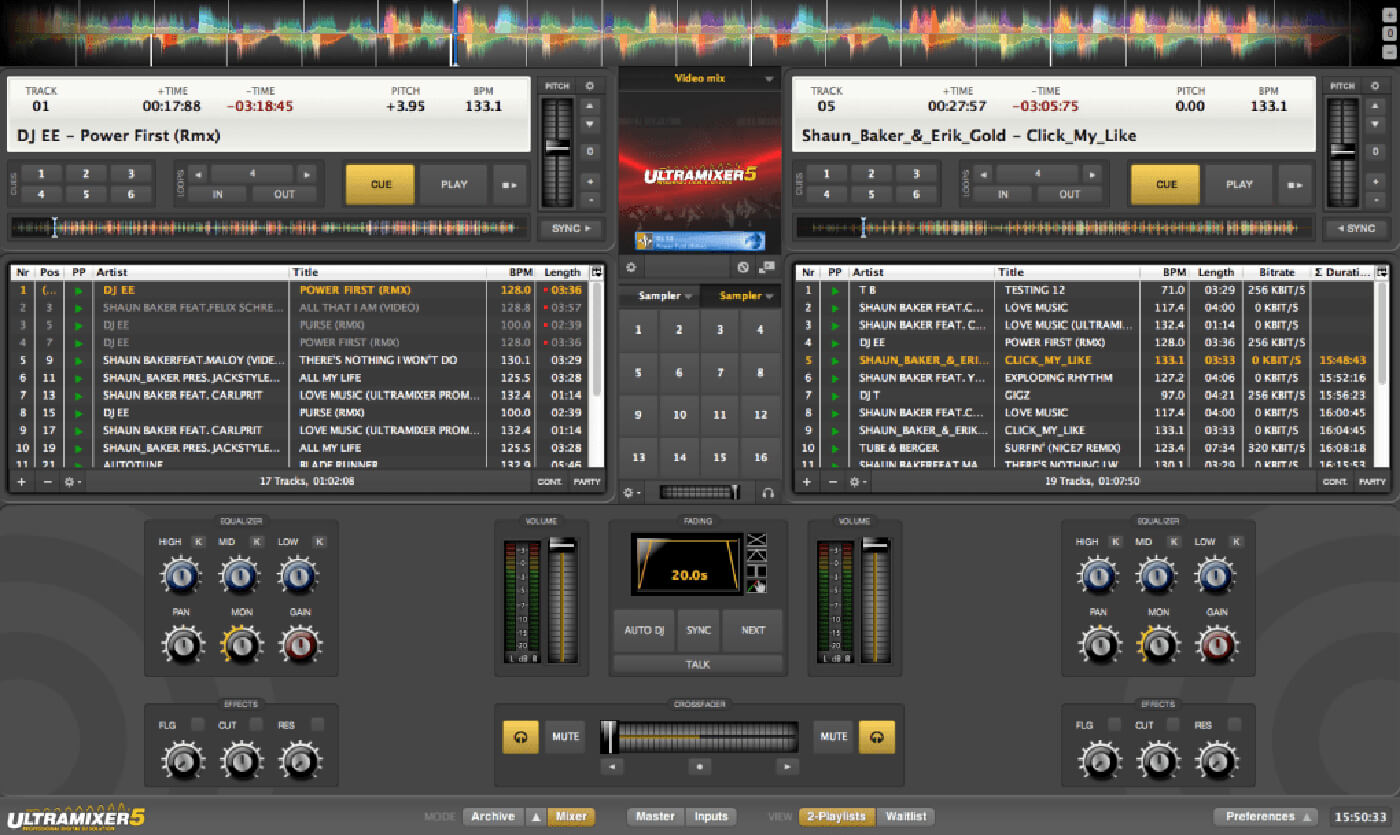 UltraMixer has a customisable layout that pushes the mixing section to the bottom of the screen rather than in the middle by default, and puts a browser underneath each of its two decks. The middle section can instead feature two AudioSamplers to trigger samples, show video samples, add notes and more. Both decks include the essential DJ tools, such as cue, hot cue, loop, play, pitch slider and more. You can create folders and playlists with the fiel management section below each deck, too, and import playlists from iTunes, Apple Music and M3U files.

The main caveat is that the free demo version of UltraMixer Pro Entertain only allows you to try the software for a maximum of 60 minutes before needing to start it up again. It also only has three different effects, even in the paid version, which doesn’t give you much flexibility in creative mixing.

Still, UltraMixer supports over 80 DJ controllers, making it a viable option for getting to grips with a new DJ controller before paying for more comprehensive software.