The Dutch producer walks through his new album’s title track via self-sampling, fake brass and a low-rent 80s keyboard that brought it all together. 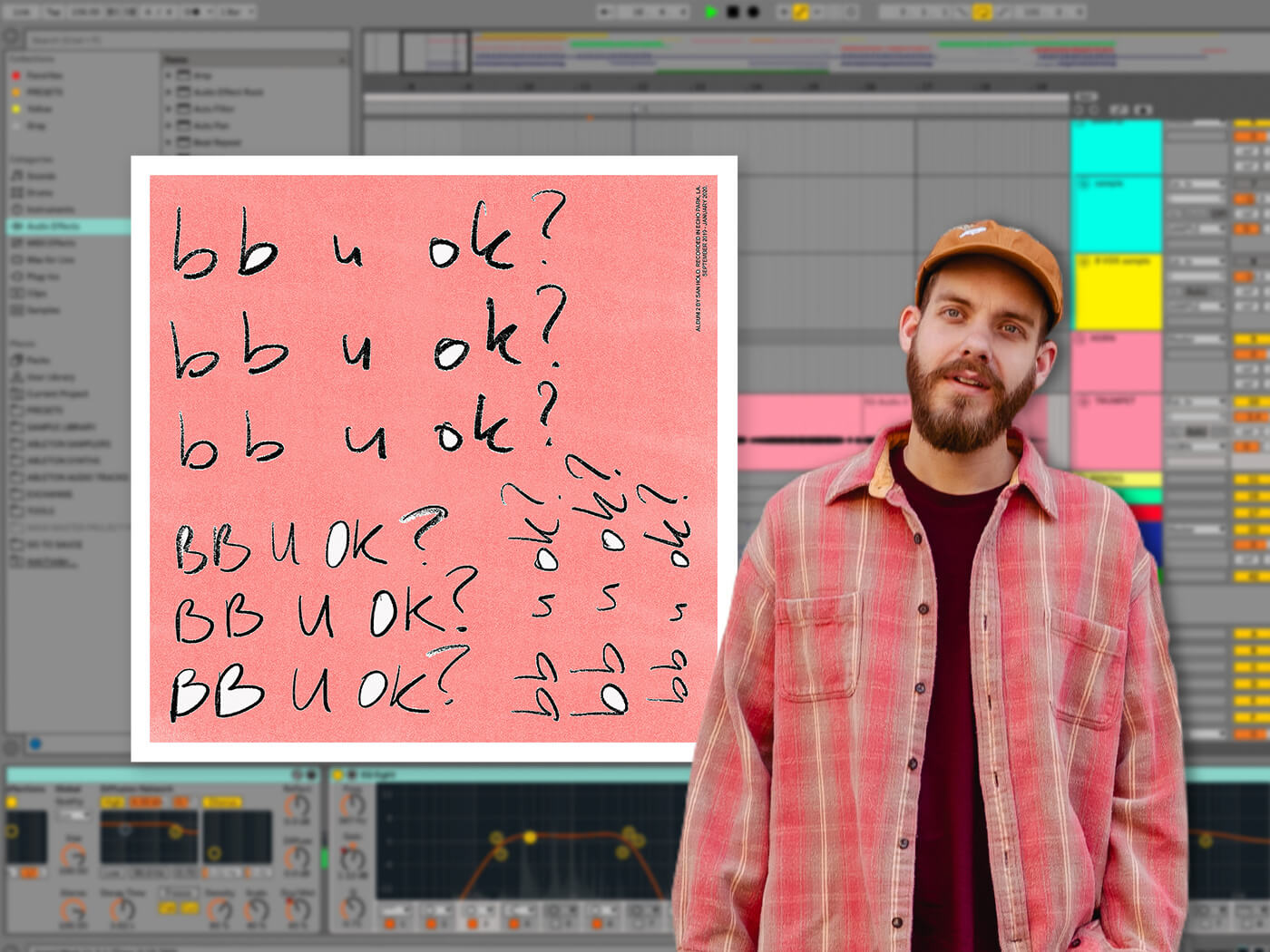 It can sometimes be challenging to pinpoint the exact moment a track is born, but Sander remembers exactly where he was when he began bb u ok?

“I made a very rough version of this beat on a flight to LA. Sometimes when I’m stressed, and my mind is all over the place, I make little beats to focus my mind on one thing. This beat was born when I was unable to fall asleep on the plane.”

The themes of San Holo’s second record bb u ok? may be personal, but they feel universally applicable, given global themes of mental health and isolation. The title track balances personal concern for the listener with a tight, upbeat production and festival-friendly, sample-chopped sound.

San Holo, aka Dutch producer Sander van Dijck, takes us through some of the single’s production highlights, including sampling with a vintage Yamaha Portastudio keyboard, re-sampling his existing work and using Ableton’s stock effects to his best advantage.

The song’s hook immediately grabs you with its crunchy, frequency-limited quality – a byproduct of how the producer sampled it.

Sander: “Me and my friend, The Nicholas, were messing around with one of our beloved sample keyboards, the Yamaha VSS-30. You can sample sound with the onboard mic. The mic sounds so lo-fi; it’s magical!”

Long-time collaborator The Nicholas, who appears on album tracks such as i just wanna fucking cry, sang single syllables into the VSS-30. The Yamaha Portastudio VSS-30, a low-rent sampling keyboard from 1987, has enjoyed a renaissance in recent years for the immediacy and sound of its 8-bit, 16.7kHz digital sampler. Part of the reason to sample this way is the keyboard’s extremely short sample memory.

“I had my friend, The Nicholas, sing ‘Ba-By-U-O-Kayyy’ into the onboard VSS-30 mic, and we pitched everything up on there, resulting in the bb u ok? sample. Most of the processing was done on the actual sample keyboard. There’s this really cool fuzz effect that completely transforms the sound.”

Amazingly, the vocal hook that appears in the final track, glitches and all, is virtually unedited in the DAW from its original state – there was no drastic EQ-ing required to make it fit.

“I only added some slight compression and reverb! Most of the sound comes from the Yamaha VSS-30,” says Sander, “The funny thing is that it really made sense from the start. The phrase ‘bb u ok?’, the sounds, the vibe, it was a very special moment when we created it.”

The arpeggiated guitar parts come from an instrument that’s close to Sander’s heart.

“I found this very special guitar in a shop one day during a road trip with my friends. It’s a Fender Coronado and sounds so magical. It sounds very transparent and clean. I recorded this guitar through a vibrato pedal into the Apogee Quartet. I like to double my guitar and pan them hard left and right.”

The post-production essentially comes down to some gentle compression with a fast, sub-1ms attack and release to emphasise the sustain over the picking.

“After that, I did some very precise EQ-ing to tame the harsh frequencies and make it shine a little more,” explains Sander. That entails guitar group processing where the low frequencies are rolled off around 60Hz, with a 5dB boost at 2.5kHz, and more gentle, 2:1 ratio compression to glue the parts together.

Around the 1:30 mark in the track, we hear the entrance of a distant horn. However, no real brass instrument or sample was co-opted for the performance.

“Surprise! It’s actually just The Nicholas mimicking the sound of a trumpet with his mouth! I don’t know how he does it, but he can produce this trumpet-like sound with his lips, and when you add some reverb, it sounds just like real horns!”

To emphasise the brassiness of the part, Sander added Waves Tune to tighten up the tuning, then Ableton Live’s stock algorithmic reverb with a 3.6 second decay time. He makes the part sound even more like a sampled horn from an old radio broadcast by essentially creating a band-pass filter after the reverb insert. By filtering the low-end below 200Hz, and the high end above 3.5kHz, he’s made an appropriately nostalgic sound.

When the main track sample kicks in at 0:28, it has a sample-chopped sound that feels like a Daft Punk or Justice reference, cutting back and forth between familiar existing tracks. However, Sander is not crate-diving for material.

“I just dragged them into my DAW and consolidated all these different samples into one file.”

According to Sander, there’s no huge behind-the-curtain secret to making these parts fit – ”it’s proper EQ-ing, sidechaining and instrumentation!”

“My drum beats are always a combination of different samples I’ve found throughout the years.
A big part of this beat is the tambourine loop; this sample definitely contributed to the groove of this song,” says Sander.

To make sure the drums cut through the mix, Sander’s sidechain compression technique was critical.

“I sidechain the entire mix to my kicks and snares. I started doing this some years ago, and I think it’s really part of my sound now. It makes the kick and snare stand out, and it allows me to get my tracks loud and energetic without it getting muddy!”

Sander is drawn to the synth he knows best for bass and pairs it later in the track with some other widely-used production staples.

“I use Native Instruments Massive for a lot of my synths, including my bass sounds. I just know the plug-in very well, and I can create any sound I want with it. Other than that, in the drop, I’m just using one of my favourite 808 samples.”

For extra impact and energy, Sander doesn’t stop at Massive and tuned 808s, though.
“In the second and third drop, I doubled my 808s with an actual bass guitar. We found this bass guitar on Craigslist, and I’ve used this bass on many songs on this album. It’s a 70s Musicmaster bass with an Aero pickup. I use a lot of saturation on my bass and, together with the 808, it creates this really powerful bass sound. I used this approach a lot on my album,” states Sander.

As far as processing, Sander is happy to stick broadly with Ableton Live’s stock plug-ins for bass.

“I saturated [the bass] in Ableton and for the rest, it’s mainly EQ and compression with heavy sidechaining to the kick,” he says.

Then, to keep the character of the bass guitar part without having it compete with Massive or the 808s for low-frequencies, he high-passes it at 400Hz.

To make the synth leads that ethereally appear at 0:52, Sander pressed his go-to synth into action again.

“The first saw wave melody comes from a patch I made in Massive. The second melody that glides up comes from the Yamaha VSS-30. And I added the pitch bend with Ableton pitching.”

The first Massive melody carries the subtle note-by-note panning of a synth cycling through voices panned to different positions. However, to create a repeatable effect, Sander created three tracks, panned left, right and centre and spread the MIDI across the three tracks.

The Dutch producer is keen to emphasise that arrangement is the foundational tool at his disposal, rather than specific production tricks. For instance, how does he use reverb to make those lead synths sound huge without swamping the rest of the track?

“It’s all about instrumentation,” he maintains, “There’s not a lot going on in the track at that point other than some synth pads and drums. There’s room for a big washed out melody!”

Without a lead vocal developing throughout the track, how does Sander maintain excitement?

“I make sure to introduce different elements and sounds throughout the track. Every drop in the song goes up in energy, which keeps it exciting,” he says. “During the writing process, I try and record a lot of things. For example, I realised I still had an acoustic guitar take from a few days ago and it really worked well in a part later in the track. Changing the instruments also keeps a track like this interesting to listen to.”

He’s also a master of transitions and energy management, heavily signposting new sections with slick production decisions. But how does he come to these decisions?

“I think this is something I like to do sometimes cause it really works well when I play tracks like this live. Playing live has definitely influenced the production decisions I make. Things like build-ups and breakdowns are important when you play live, and I imagined this track to be a banger for live use.

In particular, at 2:48, going into the final chorus, there’s an extended and transition that stands out. Sander explains what was going on during production: “At this point, I’m just splashing the entire mix with lots of reverb while increasing the rate of an autopanner,” he tells us.

One of the most difficult parts of music production for many is knowing when to let go and declare your track finished. But how does Sander know he’s finished with a track?

“This is something I can’t describe with words. It’s a feeling of peace in my head that I get at some point. It’s really not something tangible. I just feel it when the track feels right.”

San Holo’s new album bb u ok? is out now via bitbird/Counter Records. You can buy or stream it here.