We break down beat making, sampling and low-end mixing techniques to build a track with a similar vibe to the smash hit, Streets. 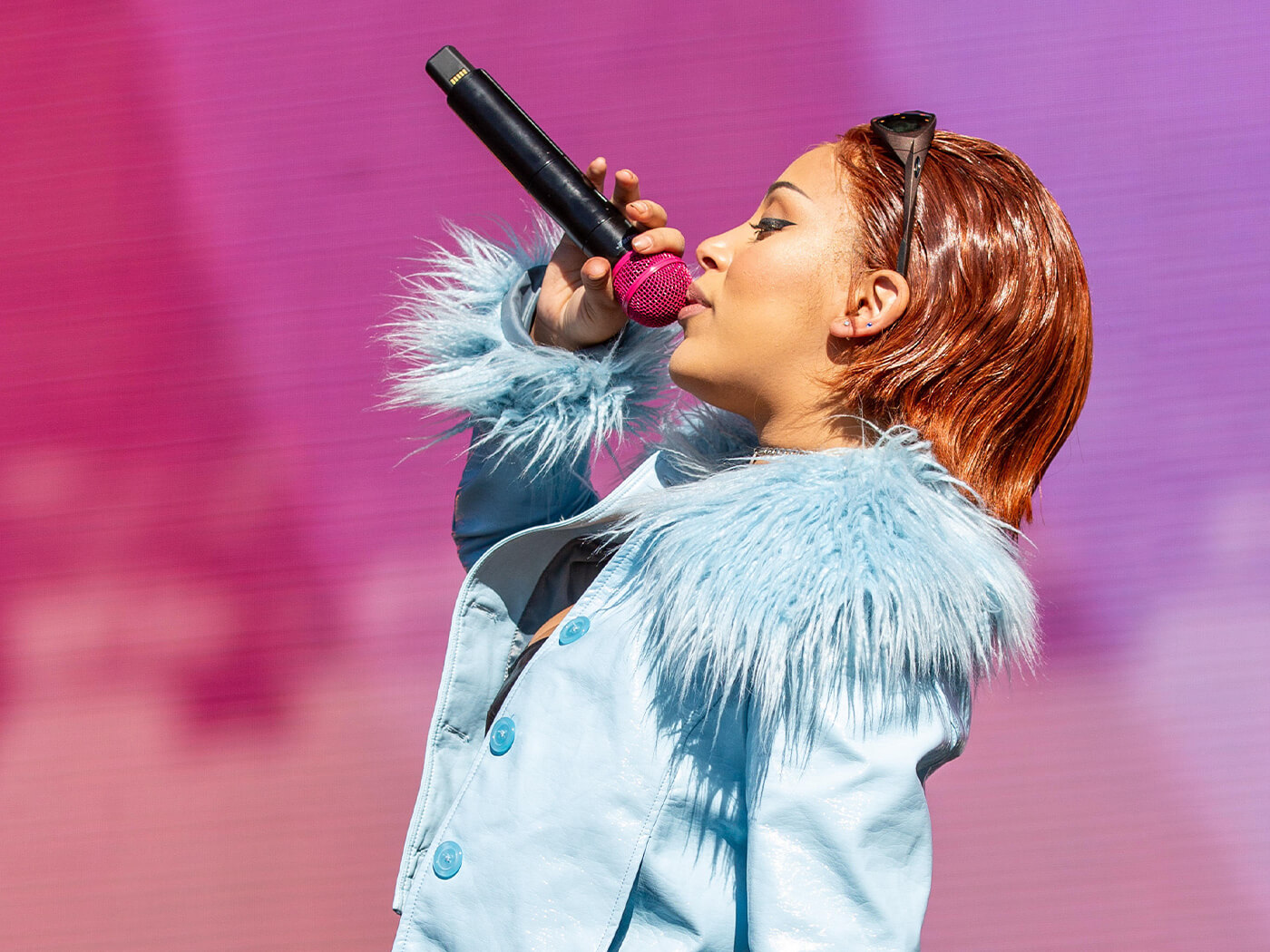 For this instalment of How To Sound Like…, we’re looking at US songstress Doja Cat and some of the techniques used in the creation of Streets, produced by Blaq Tuxedo and taken from her 2019 hit album Hot Pink. Fusing elements of hip-hop, RnB and pop music into a glossy, expensive-sounding record, Hot Pink was a top 10 hit on the US Billboard chart. It also spawned the platinum-certified hit single Say So, which became massive after Nicki Minaj was drafted in to feature on the remix.

Doja Cat has been active since 2012 and began rapping, singing and producing using GarageBand from her home. Her first SoundCloud upload So High came to the attention of RCA Records, who snapped her up and repackaged the song as her first major single in 2014. Since then, Doja has released two albums, becoming a household name in the process.

To give you some insight into how this top-tier record was created, we’re going to break down some of the beat making, sampling and mixing techniques. In this tutorial, you will learn how this kind of record is produced and how you can use similar techniques in your productions.

Let’s kick off by focusing on making drums in a similar style to those used in Streets. We’ve loaded up a blank DAW session at 90bpm, with the RnB kit from Native Instruments’ Battery providing the drum samples for the all-important kick/snare groove.

We’ve plumped for Snare RnB 3, which is a snare with a similar tone and feel to the original track, then pitched it down by one semitone. The trick to convincingly recreating the drum pattern is placing the snare hits on beat 3 in every bar; this creates a half-speed groove, giving the trademark lazy feel that Streets has in spades.

We place a kick on beat 1 of every bar, with two kicks on the fourth beat and the following offbeat. Try alternating where they fall to create some movement in the part – this gives us a comparable pattern to the original.

Also, slightly reducing the velocity of the kicks that don’t fall on beat 1 gives a more human feel. You can make the groove feel even less rigid by applying an Akai MPC-derived groove template which nudges some of the hits to be slightly ahead of the beat.

The hi-hat used in Streets is a classic 808 sample, so we’ve pulled up our DAW’s built-in 808 kit and used the closed hat sample. We’ve programmed in a simple 8th note pattern. To add some rhythmic interest, we’ve added some sped-up, trap-esque fills at the end of bars two and four. This entails programming 16th triplet and 32nd notes, though you can go faster for a more extreme machine-gun hi-hat sound. Again, a slight swing, courtesy of the MPC groove template, reduces the static feel of the drums.

The bass used in Streets is a deep, chunky Reese that makes the speakers rumble on a big sound system and carries nicely on lesser playback systems. Recreating this sound is pretty straightforward using any synth with sawtooth waves and detuning abilities. Here’s a tutorial on making a Reese bass sound with Ableton Live’s Operator, but we’re using Xfer Records’ Serum in this instance.

First off, we’ve loaded up a sawtooth wave on oscillator 1, with three unison voices. If your soft synth doesn’t already have unison voices detuned, tune the second up a small amount and the third down by the same amount. In Serum, our sound is already heavily detuned, and we need to tame it by reducing the detune amount to around 0.1 semitones. Next up, we turn on the sub oscillator, tune it down by one octave then select the sawtooth wave. This adds low-end thickness to the sound similar to the original, with the main oscillator adding harmonics that will cut through on smaller speakers.

Next, select the low-pass 24db/octave filter, and route both oscillator 1 and the sub oscillator through it. Reducing the cutoff to around 200Hz removes most of the high frequencies, turning our D’n’B-friendly Reese bass into a more menacing, low-end bass tone. Pushing the ‘Fat’ dial up to 50% in Serum adds emphasis and depth to the sound.

To make the Reese more impressive in stereo, duplicate the Serum channel and increase the filter cutoff to around 400Hz to allow more harmonics to pass through. Roll off the low-end using a high pass filter at 150Hz, then add Soundtoys’ Microshift. This plug-in adds a slightly different pitch shift to the left and right channels for a widening effect. Setting the mix to 50%, with the detune and delay controls also at 50% creates a wide layer that you can mix in subtly for stereo width.

Listen to the example below for four bars of low Reese only, followed by four bars with the stereo layer mixed in.

As with many other contemporary records, Streets uses a snippet of Doja Cat’s vocal played back through a sampler to create a riff that runs through the track. We can make our own take on this sound using a vocal line loaded into any sampler, with some added effects. Start off by grabbing a raw vocal line from BandLab’s Vocal Chop Redux sample pack, then load the vocal line into your DAW’s sampler.

Next, move the start point through the vocal clip until you find a section that suits the track. Here, we’ve changed the root note to G3, adjusting the vocal clip’s tuning so that the riff is in key with the track. You can also use the sampler’s output level control to make the vocal line loud enough to be heard without dominating the track. In this instance, we’ve increased the level to -3dB.

To make our vocal line sound more similar to the one used in Streets, use the sampler’s low-pass filter to remove some higher frequencies above 3kHz, giving the vocal riff a smoother sound. This will also help the sampled vocal riff stay out the way of your lead vocal.

Finally, add some much-needed reverb. This will push the riff further back into the music bed, leaving a lead vocal more space. We’re using Valhalla’s Vintage Verb, but you can use your DAW’s stock reverb if you prefer. On the vocal riff track, we load up the Randall Hall preset, which has a naturally dark tone, then reduce the wet/dry mix to 40%. Setting the pre-delay to 15ms makes the reverb sit more tightly with the dry vocal sample, and setting the low-cut filter to 800Hz stops the reverb’s low frequencies swamping the mix.

As with any A-list production nowadays, a considerable part of the sound of Doja Cat’s music comes from the mixing techniques used. To this end, we wanted to make the kick and bass complement each other more effectively. In the clip above, you can hear some crunching when the kick hits simultaneously with certain bass notes. We want to fix that.

Many producers and mix engineers will use a compressor, triggered by the kick, via a sidechain. This ducks the bass level when the kick hits, creating space for the two sounds to coexist more effectively. However, a less obvious way of achieving our goal is to use a sidechain-enabled EQ instead to carve a notch out of the bass when the kick plays. The result should be a fuller sound in the low end and minimal reduction of higher frequencies, making for a more transparent effect.

After separating the kick and snare onto individual channels, load a sidechain-enabled EQ. We’re using Fabfilter Pro-Q 3 on the bass channel with the sidechain input set to the kick channel. Add a bell curve band to match the fundamental frequency of the kick – 65Hz in this instance. Next, select Make Dynamic from the drop-down menu on that frequency band, so the band responds dynamically rather than as a static EQ curve.

Enabling the external sidechain trigger for the EQ band makes it respond to the sidechain input. Then, setting the Q value to 3 makes our EQ cut tighter, giving the processing a more focused sound. We don’t want to cut the bass completely when the kick hits, so set the band’s dynamic range to -3dB. This creates more clarity in the low end and reduces the unwanted frequency clash.

After creating our own take on the drums, bass and vocal riff from Streets, a little mix bus processing helps give the finished loop a more polished feel. In a recent interview, Clint Gibbs (lead mixer for Hot Pink) recalled how he’d used some saturation on an effects send to fill out the low mids of the mix, giving increased presence on the kind of smaller speakers that many Doja Cat fans use to listen to her music.

You can do this by creating a send and adding Soundtoys Decapitator. Send only the kick and the two bass parts to it. Increase the drive to around 7, with the low-pass filter set to 1kHz and the high-pass filter at 100Hz. This gives us some extra low-mid power.

Next, to glue the drums together, group the drums and then add a little compression to the group using the UAD Fairchild or similar bus compressor. A touch of short reverb on the hi-hat and snare will fill the space without swamping the drums or the overall mix. Play with the send level to find a suitable amount.

The result is a convincing take on Streets, with a similar tone and feel to the original track, particularly with the Reese bass underpinning things. The loop sounds full and weighty, but at the same time, there’s plenty of room in the mix for a dense, highly produced lead vocal. As many commercial tracks in this style are made chiefly, or wholly, in the box, it shows that you don’t need a vast studio brimming with kit to create a premier league product.