Show Off Your Studio: Never Not Nothing’s sonic science lab

The future punk duo let us into their newly-built London laboratory to show us how they break the rules of production. 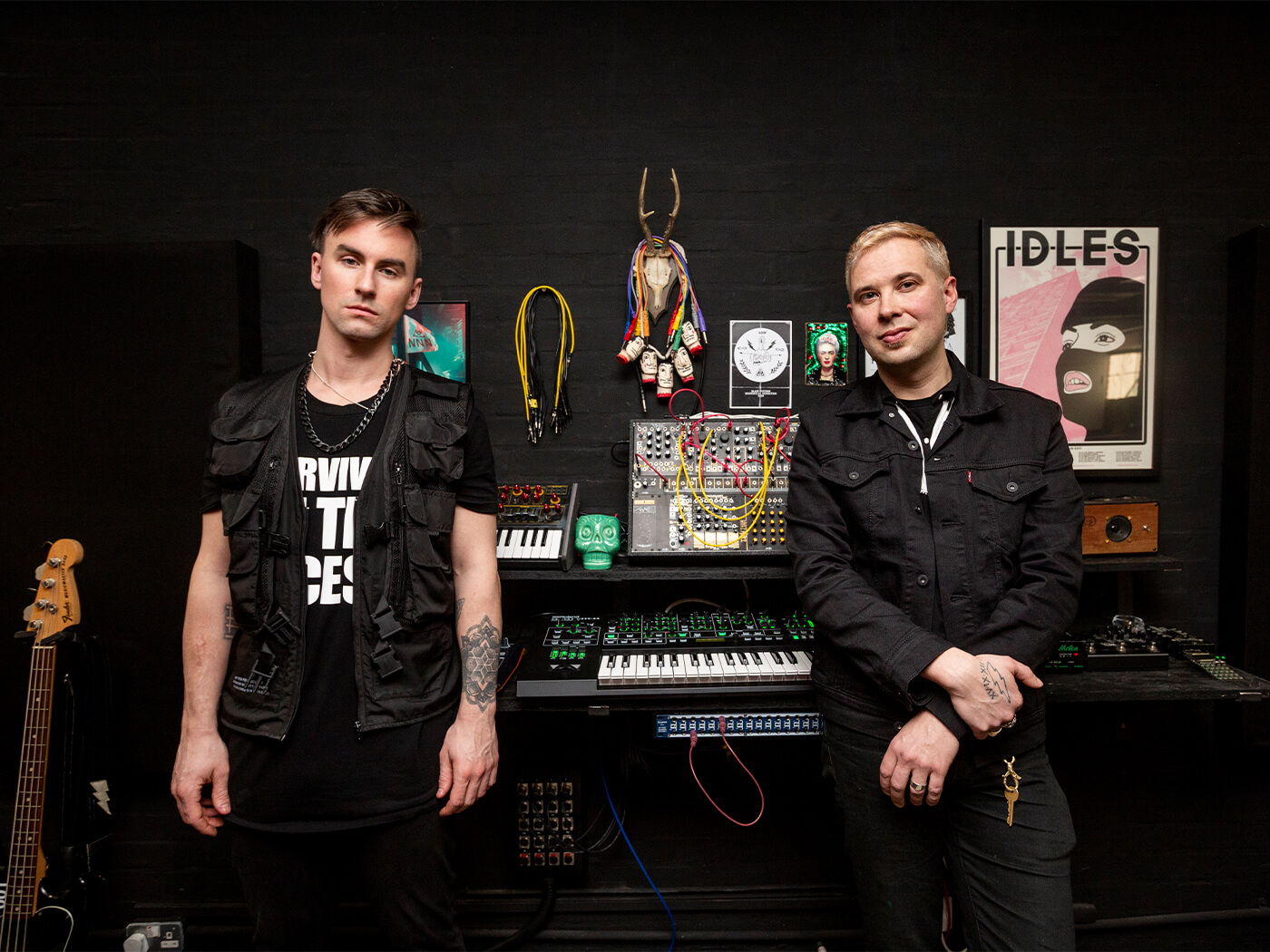 Formerly known as Black Futures, Never Not Nothing is the moniker for future punks Space and Vibes. The duo found their feet by producing and writing for IDLES and The Prodigy, before releasing their highly acclaimed self-titled debut album in 2019. The Independent said the band “could do for British rock music what Daft Punk did for French EDM in the Nineties”.

After the release of their heavy-hitting Maximum single, the duo are gearing up for the release of their next project, Art Ritual, later this Spring. We head to their newly-built studio in London to speak with Space. We learn why the Moog Sub 37 was imperative for this project, how they use their Make Noise modular system and why it’s essential to capture the energy of a performance before bending the rules in the production phase. 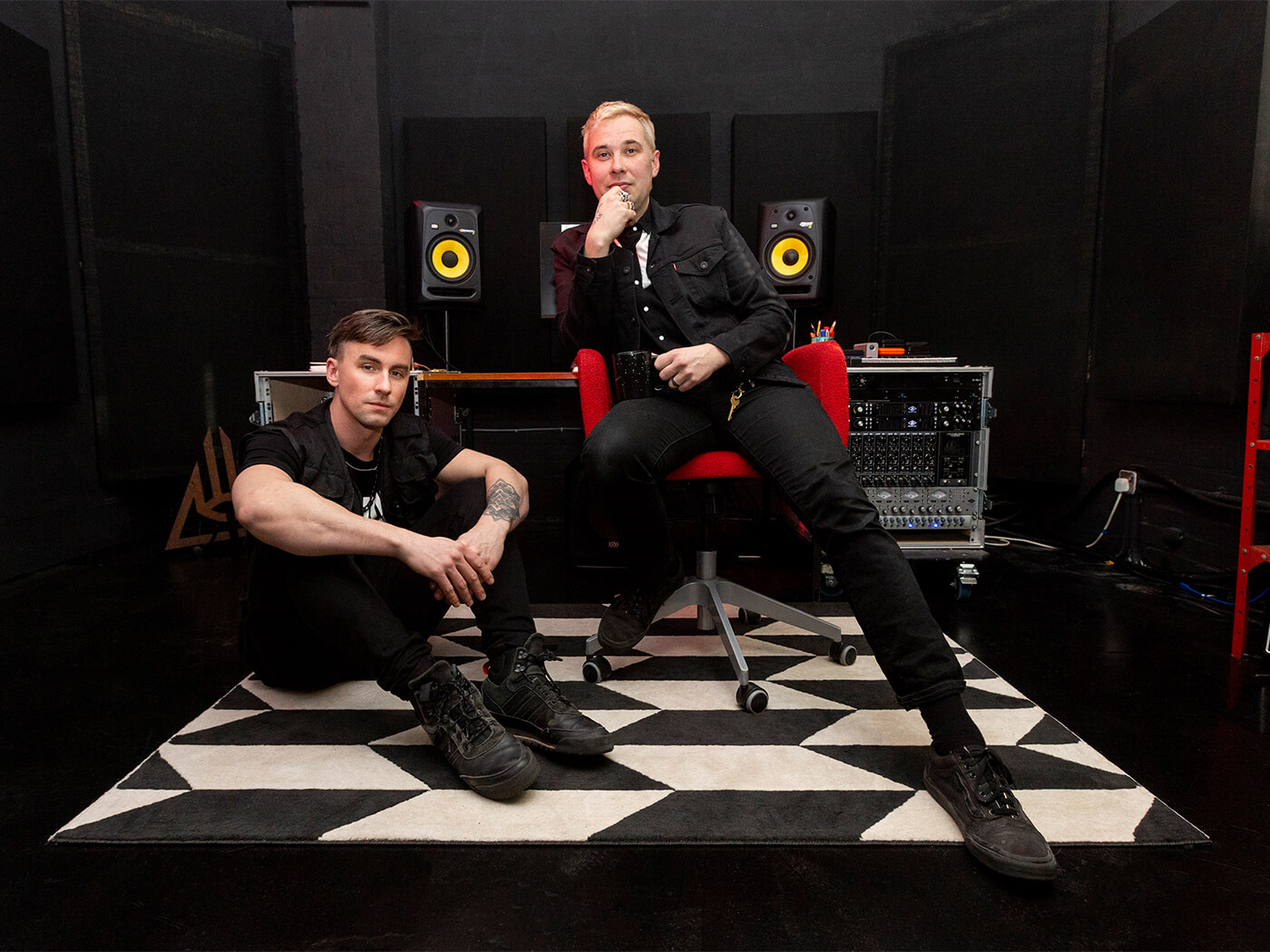 Tell us a bit about the studio, Never Not Nothing.

Space: We’ve pretty much just finished the build and moved into this space. It’s called the Infinity Factory and is located in Wandsworth, South London. It was time to get a place where we could write, compose and produce records from start to finish. I had spent too much time moving around to different studios and altering my workflow to suit that environment. It is absolutely amazing to build a space of your own.

The studio is the creative hub for Never Not Nothing. We can go from writing and recording our own tracks to producing and co-writing for other artists and working on a score pretty seamlessly, which saves a lot of time. We have a large isolation booth for loud cabs and a great sounding open-plan workspace which allows us to use the studio as an instrument and easily communicate with performers while tracking bands.

We have Ableton Live, Logic Pro and Pro Tools but I’m a big fan of Logic’s workflow. It’s the DAW that limits me the least when writing and producing, probably because I’ve spent the most time on it. We use Ableton for sequencing and clocking when playing live. It’s amazing for keeping arrangements free when performing with synths and samples.

My Gretsch Black Falcon guitar. It has sentimental value but it also sounds incredible and feeds back musically in a way that I can play into it.

Can you tell us a bit about your modular setup?

At the moment, it’s based around a Make Noise Shared System, but we’ve just started building another rack to sit alongside it. We use an Arturia Beatstep to clock from the computer and as an additional sequencer for creating polyrhythmic patches. All of the synths, noisemakers and pedals are on their own patch bay, which is awesome for trying signal flows out with ease.

We have tried to create an atmosphere that is immersive and playful. A place where you feel comfortable to stretch out and let your creativity take over. One that is not centred around sitting at a computer. Everything is always patched ready to make noise and record a unique performance.

What synth or effect can be heard the most on your upcoming EP, Art Ritual?

The Moog Sub37 features heavily on a lot of our songs. Although, the Gamechanger Audio Plasma pedal got heavy use on this EP. It’s such a unique distortion. I’m always intrigued to see how it reacts to different sources. 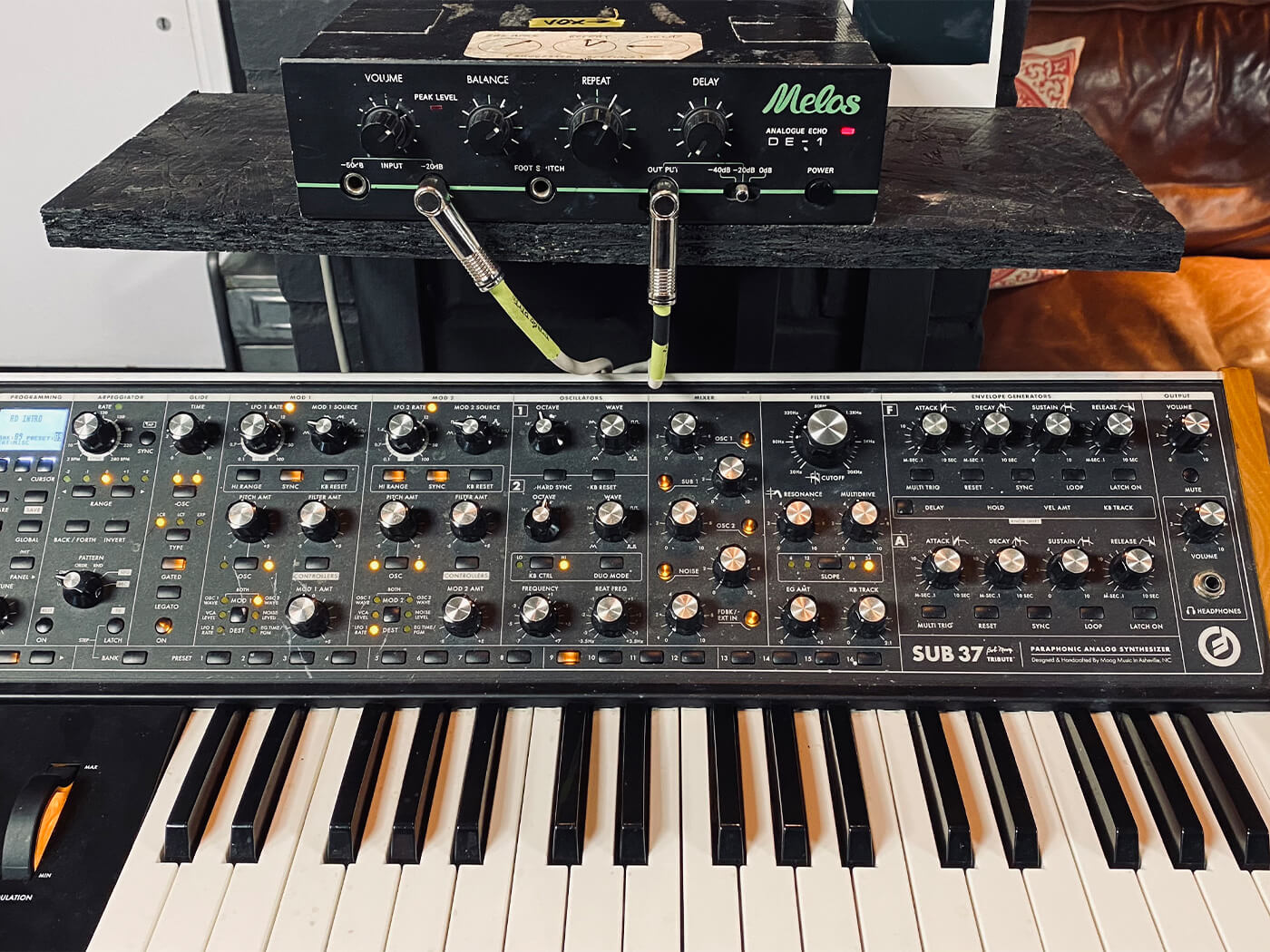 How did your production process differ when writing and producing for IDLES and The Prodigy?

With IDLES, it was about spending a lot of time in pre-production crafting the songs and arrangements. Then, capturing their energy, anger and vitality live in the studio, leaving us plenty of time to experiment with backing vocal’s, noise and percussion. It was a matter of distilling their chaos.

When we did some co-writing and co-production with The Prodigy, we were sending tracks and parts back and forth on email remotely, which was an equally interesting way to work. It was focused on crafting massive beats and sonic landscapes. We are massive Prodigy fans, they are legends and pioneers so it was massive for us to work with them.

Once I’ve bought the gear I tend to forget how much it cost straightaway and get busy using it. I have never regretted a purchase, that is for sure. If it makes or records transcendental noise it’s always worth it! 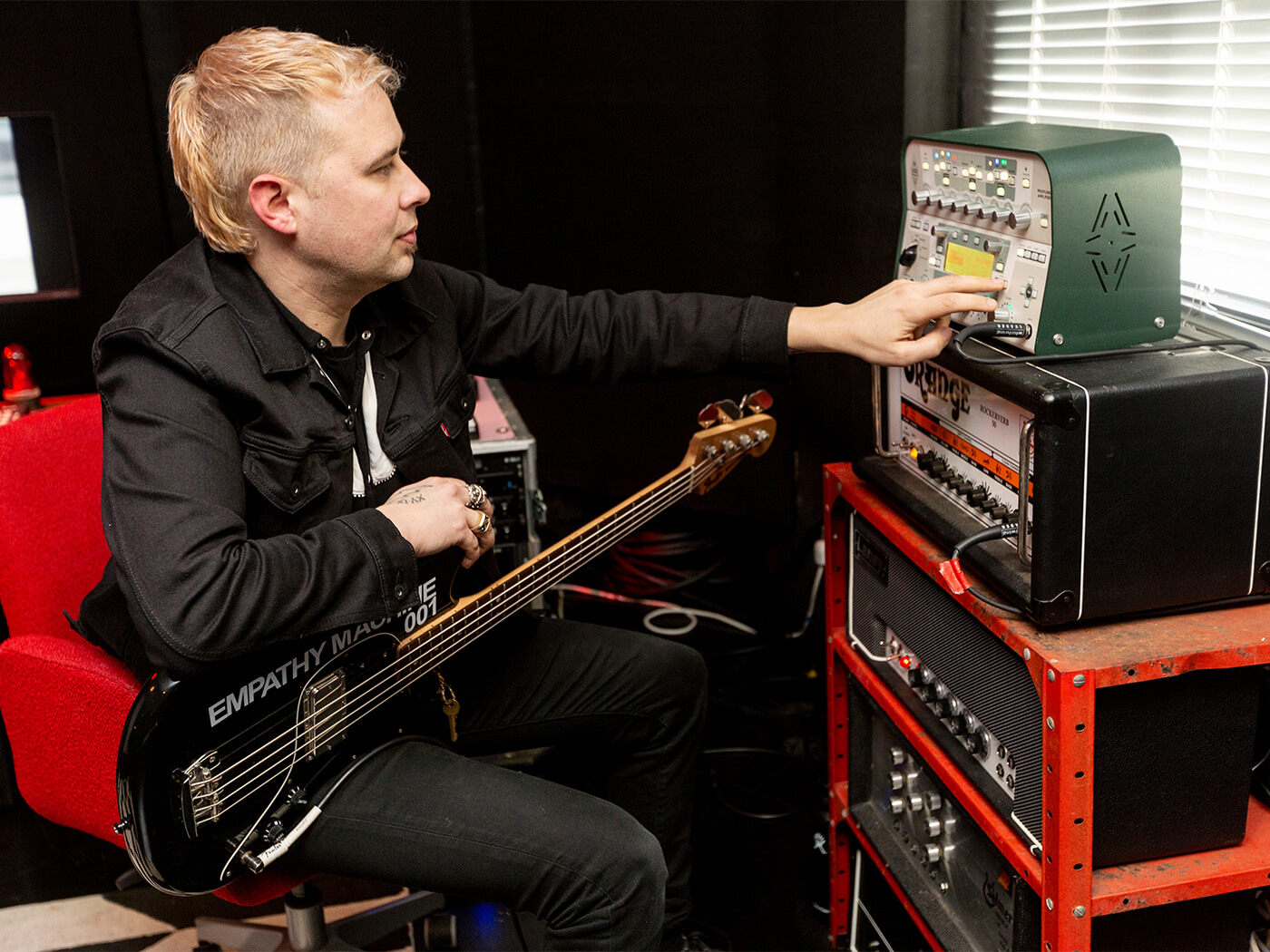 I would take a toolbox so I can craft an array of weird Island instruments to jam on. Tuned coconut husks, and so on.

As we wanted an open-plan workspace for the main studio, we worked hard on getting one end of the room treated for critical listening with broadband absorbers and bass traps. The rest of the room is treated with more broadband absorbers to take some of the energy out of the room and focus the sound. We also built rolling baffles to surround the kit. This way we can add or takeaway treatment depending on how lively we would like the recording to be. 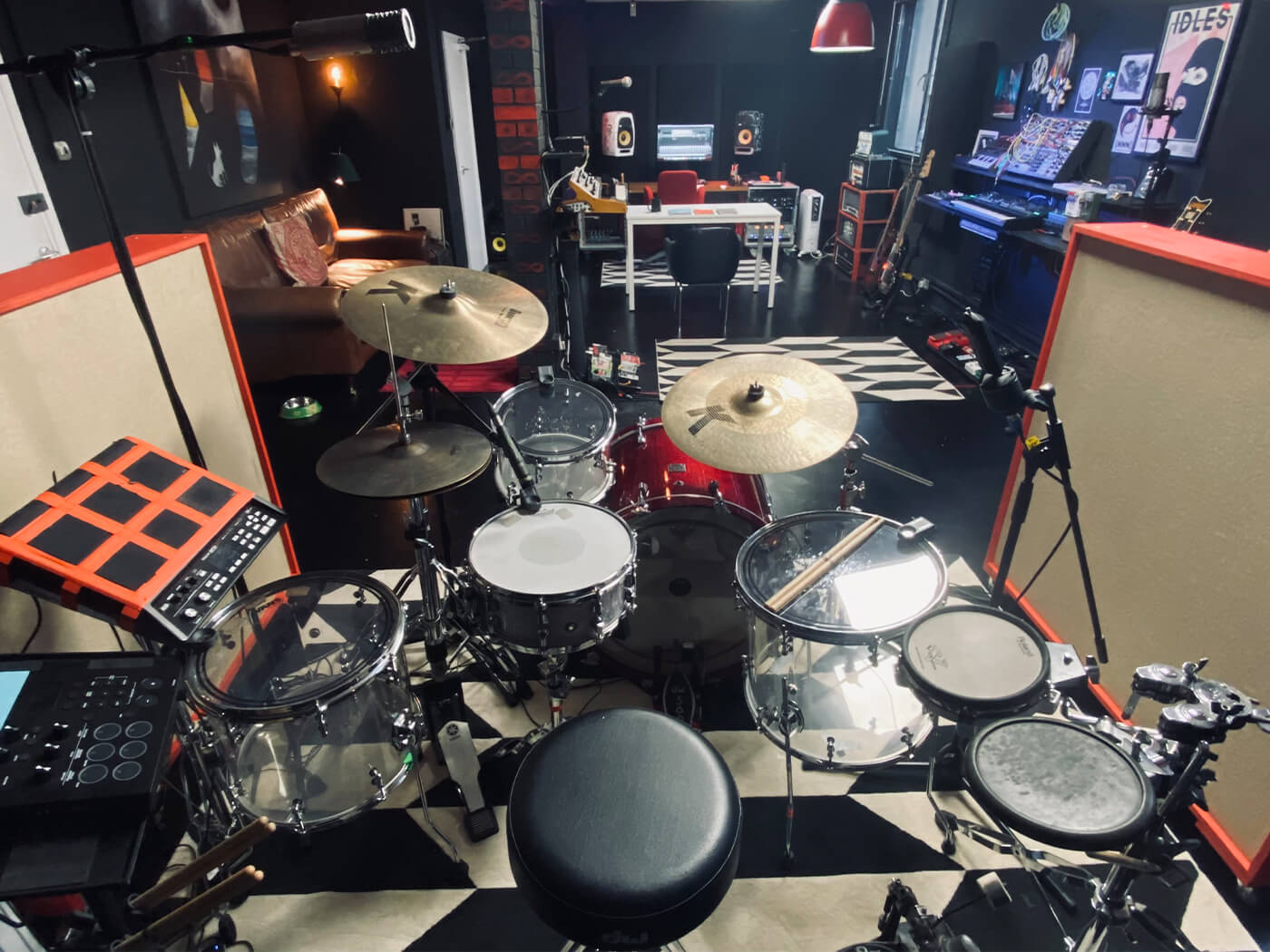 A piano is the next big purchase. It is such a great writing and composing tool. It’s sonically useful for all sorts of records too. We love doing prepared piano stuff and resampling it into a beat. We are also slowly building our outboard and mic collection.

Nothing specific. It’s normally an instrument that inspires us to write a song. Some synths or instruments just give you that sound that makes you hit record and disappear into another world. I have always wanted a vintage Wurli for that reason. 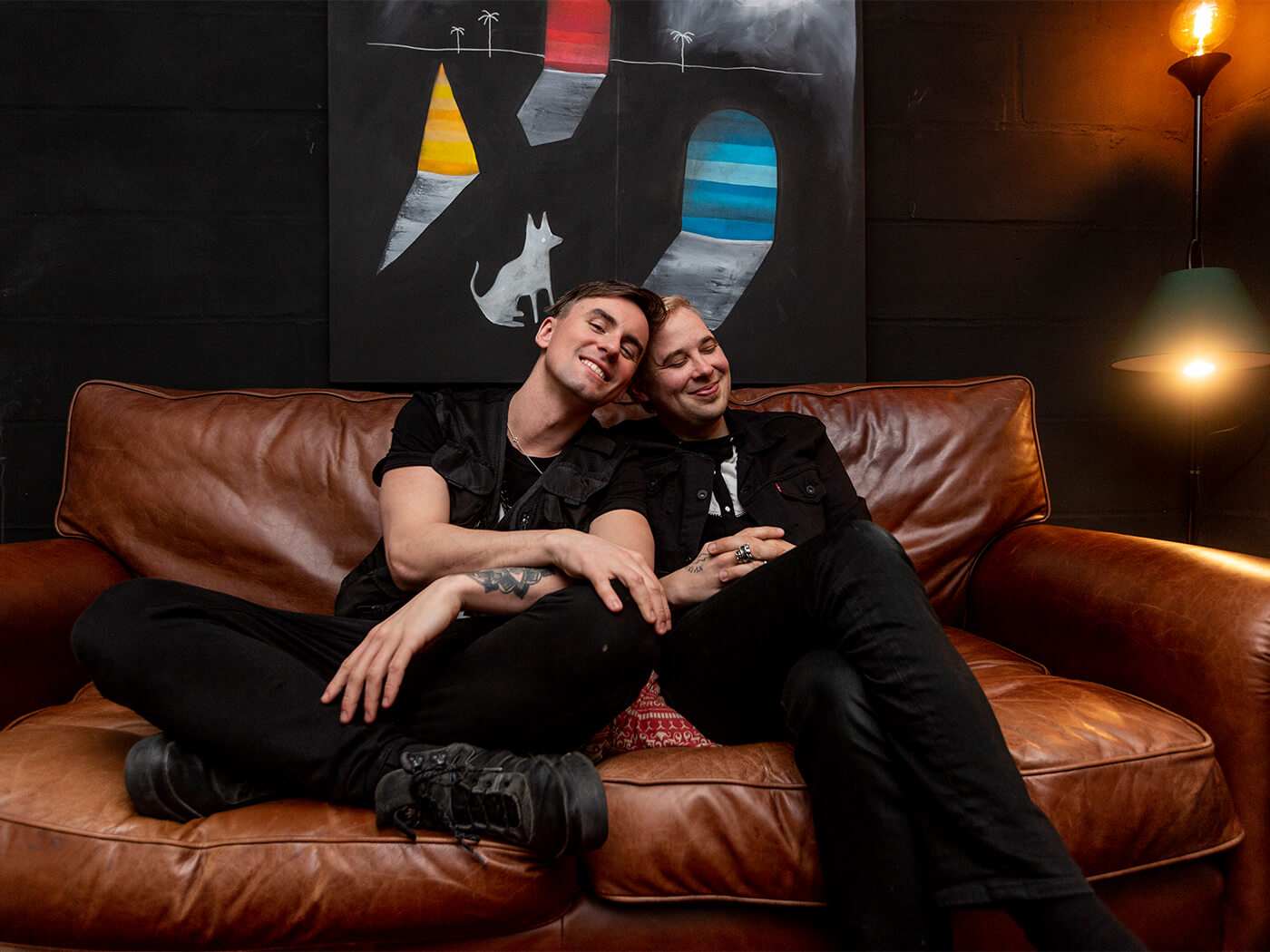 Focus on the music, songs, intent, energy and performance first. Then have fun breaking the rules.

Think about your workflow and the function of each space right from the start. Work smarter not harder.

Learn more about Never Not Nothing’s upcoming releases at nevernotnothing.com.