You could see this synth as a Sub Phatty on steroids, but it tidies up a few of its predecessor’s rough edges. Is there anything not to like about the Sub 37? 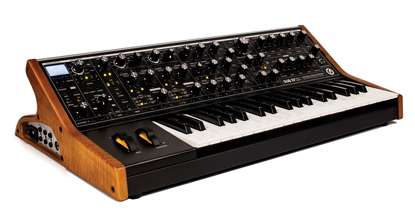 The Moog Sub 37 was the surprise announcement of last year’s NAMM show and as we gear up for this year’s show, such was the stir created back then we’ve only just managed to get our hands on one.

I recall the unbridled enthusiasm of Moog’s Amos Gaynes – and bow down to that man’s synth knowledge – as he talked me through the features of a synth that had literally been thrown together for the show. But even then – and with just a couple of presets – it sounded incredible. So nearly a year on I finally have one…

Sub, Sub and More
You can’t help but compare and contrast with the Sub Phatty as they are both based on the same Moog sound engine. The Phatty was a synth which I had the pleasure of reviewing for MusicTech over 18 months ago. It had an amazing sound but the odd critic of it (narrow-minded ones, in my book) took it to task for its lack of screen and the fact it only had 25 keys and 16 presets, all of which have been remedied with the 37.

So we have a small LCD screen, a 37-note velocity sensitive keyboard with aftertouch, and a whopping 256 presets (176 filled, the rest empty for your efforts), so Moog has certainlybeen busy since that NAMM encounter.

You can step through these presets and banks either by using a simple cursor system on the screen (one button to select, two buttons to go up and down) or, more simply, press the Preset and Bank buttons at the bottom of the front panel and then select one of 16 using the 16 buttons. You can’t just step through banks as you have to select a preset after in order to make the bank change, but either method is easy and it’s nice to have the choice.

Architecture
Layout-wise, you’ll recognise the analogue signal path… up to a point. The 37 sticks very much to the ‘standard’ analogue synth layout but, as we’ll find, many of the sections seem to go that bit deeper – and in some cases a lot deeper.

There are two main oscillators, both with variable waveshapes; a sub oscillator (fixed with a square waveform); a noise generator; plus you can also take external signals in. That’s your sources taken care of, but like I said, the 37 takes what could be a standard set-up and gives it a twist.

In the case of the oscillators, you can operate the synth in Monophonic mode or Duo-Paraphonic mode.

Now you could simply summise from this that the 37 is like a duophonic synth, so you can play two notes at once, but it’s a little more involved than that. What it really means is that you can effectively play two different notes at once, both sharing the same filter and VCA. The different notes are represented by the oscillators but in true duophonic (polyphonic) synths each voice gets their own dedicated filter and VCA.

Basically, the bottom line is that Duo Mode is a great way to squeeze more out of less. You end up with some incredibly rich ‘polyphonic like’ sounds. And combined with the arpeggiator and sequencer (see the box over the page for more on those), these incredible sounds have some incredible movement, as we’ll see later…

More, More, More…
So we already have a twist on the normal, but there’s more. First, though, there’s a fairly standard Mixer and Filter section, although the latter does boast that Multidrive circuit (also on the Sub Phatty) that is placed between filter and amp for more dirt.

The envelopes (amp and filter) provide lots of note character and filter editing – how each operate over time, basically. A couple of little twists here include extended functions such as Delay and Loop switches (the latter of which effectively turns it into an LFO), all part of close to a dozen buttons split between each of the envelopes.

Modulation Madness
But it’s the double modulation section where we find even more drama, and possibly the Sub 37’s greatest sonic weapons. Modulation sources and rates are present and correct – use one of the five waveforms or filter envelope of each Mod – and the destinations include some of the more common ones you’ll find (Osc 1 Pitch, Osc 2 Wave, Filter, VCA Level, and more). All of these are easily switchable with six buttons for each destination.

The real beauty, however, is that you can program more sources (Amp Env, Constant ON, Sine LFO, Noise LFO, Osc 1 Pitch, Osc 2 Pitch, Seq Note, Seq Vel, and Seq Mod) and a lot more destinations – too many to list here but think ‘every function on the synth’ and you won’t be too far off. Want to have an LFO modulate the arpeggio rate for wonky results? No problem. You can pretty much modulate what you want, taking this synth way beyond the norm.

Best of all, the process is easy – just hit the Controllers button which opens up a (small) menu of sources and destinations on screen and then scroll through the options in alphabetical order. OK, a bigger screen would have been great here but there’s often a couple of ways of doing things. We’ve mentioned the two preset management methods, and here you also get a fine-tune dial to more easily navigate through modulation parameters. 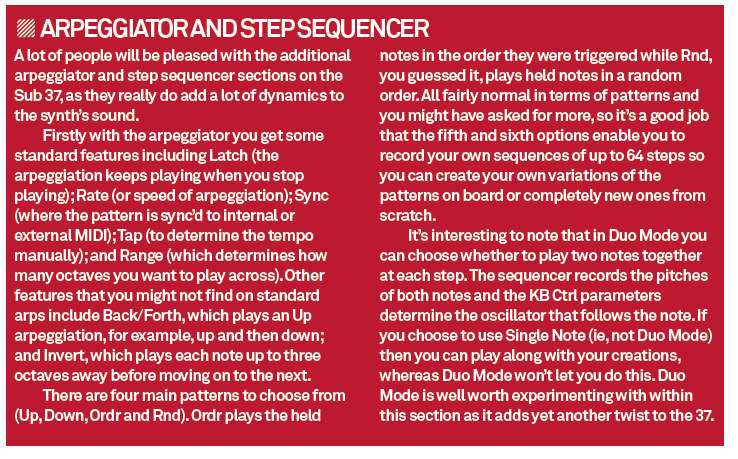 And to have this modulation flexibility in your sonic cannon is amazing and possibly a little overwhelming for some. My advice is to just play: modulate the obvious first and then lift the lid on the options and explore the potential at your own pace.

These added extras – in each section of the synth – obviously give the 37 a great deal of sonic flexibility, and while some of these functions were available on the Sub Phatty they were effectively hidden a layer down, so to have them in front of you like this is a blessing. So what does this all mean sonically. Time to find out… 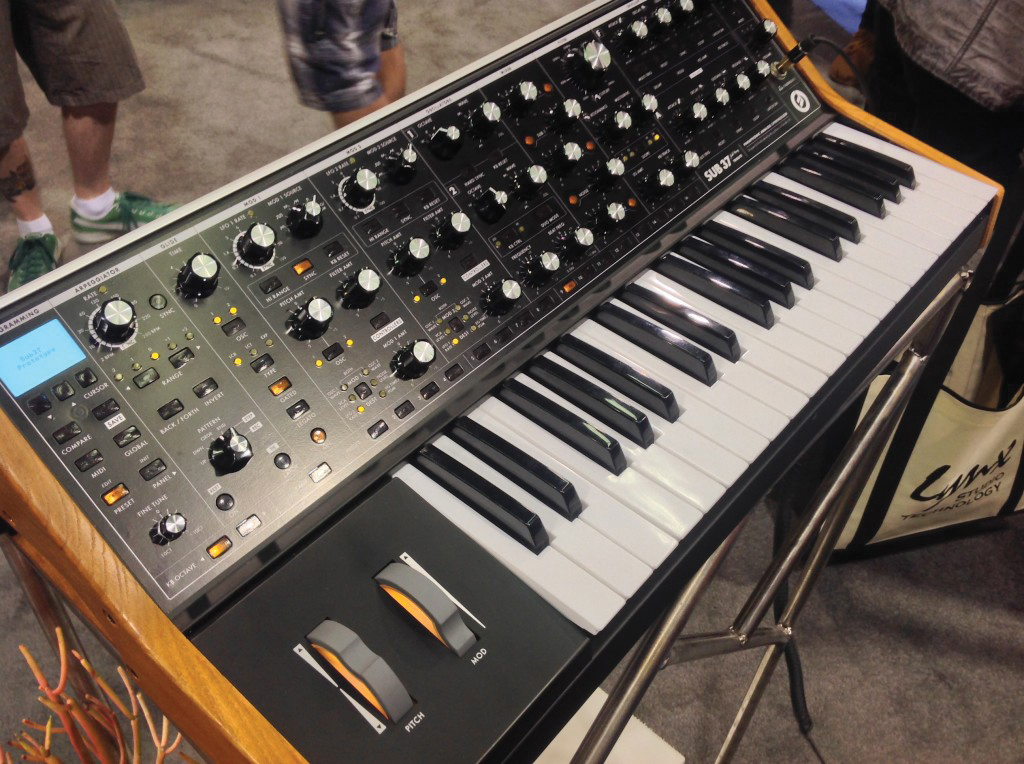 Tone on the Range
The first thing that is very evident when you step through the sounds is how well the programmers have utilised Duo-Paraphonic mode. Often, playing one single note gives massive results – like a polyphonic chord on many other synths – and when using the arp, one part of the note suddenly veers off and leaves the other one behind.

Fans of Moog’s more standard sounds won’t be disappointed here: I’d say there’s a fairly even split between lovely classics, including lots of throbbing basses and Kraftwerk-ian wonder, and modern or off-the-wall stuff that utilises the Duo mode very well. As always with synths and presets, my method of rating them is simple: do they inspire you to go off and make music? The answer here is nearly one out of every two did just that, which is about as good as it gets.

Some of the other highlights include bass sounds with a load of sweeping movement, and other bass sounds with melody provided by the sequencer where you think ‘just add some beats and you’re there’ – especially in the case of the Just Add Kick Drums preset!

Indeed, my only problem was trying to tear myself away from inspirational note sequences I was playing and could quite easily have turned into full tunes were it not for the fact that I had to write this wretched review!

Genres that Sub 37 is aimed at? Well there’s a fair amount of aggression as you might expect, so darker forms of techno, deeper forms of house and dubstep; big bass for drum ’n’ bass.

I dare say the same people who moaned about the lack of screen on the Sub Phatty will moan about the size of screen on the 37. Personally I think producers spend too much time looking at all sorts of screens these days rather than actually listening to what they are creating and how their interaction with an instrument affects the results.

With a machine like the 37 you interact to your heart’s content, screen or not, just dialling, connecting unusual sources and destinations and, more importantly than anything, learning. OK, the sound is more important but luckily this beast oozes quality at every turn, following solid analogue formulae at one instance and then bizarre twisting snake sonics the next.

Beware, you will lose a day or two of your life just playing. And make sure you record everything as you will come up with wonderful music.

There’s only one slight problem. It’s called the ‘Tribute Edition’ as it’s a tribute to Moog Music’s founder, Dr. Bob Moog. It is also a limited edition. Now, Moog would be foolish not to keep offering some version of the 37 in the future, but stocks are dry for a couple of months and this could mean you will have trouble buying one. 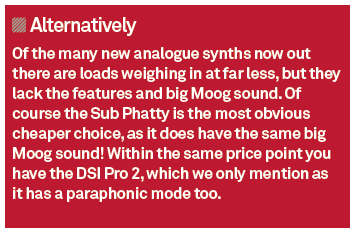 If you manage, however, you will be the proud owner of one of the best synths in Moog’s prestigious history. It’s one that takes the best bits of the Phatty range and the Sub Phatty itself, irons out any issues and also treads an individual path with far more options.

And that last conclusion, which as I write (just) in the 50th anniversary year of the founding of the company, has to be the best tribute to the forefather of synthesizers.

And I almost forgot: not important to some, but it looks stunning too.