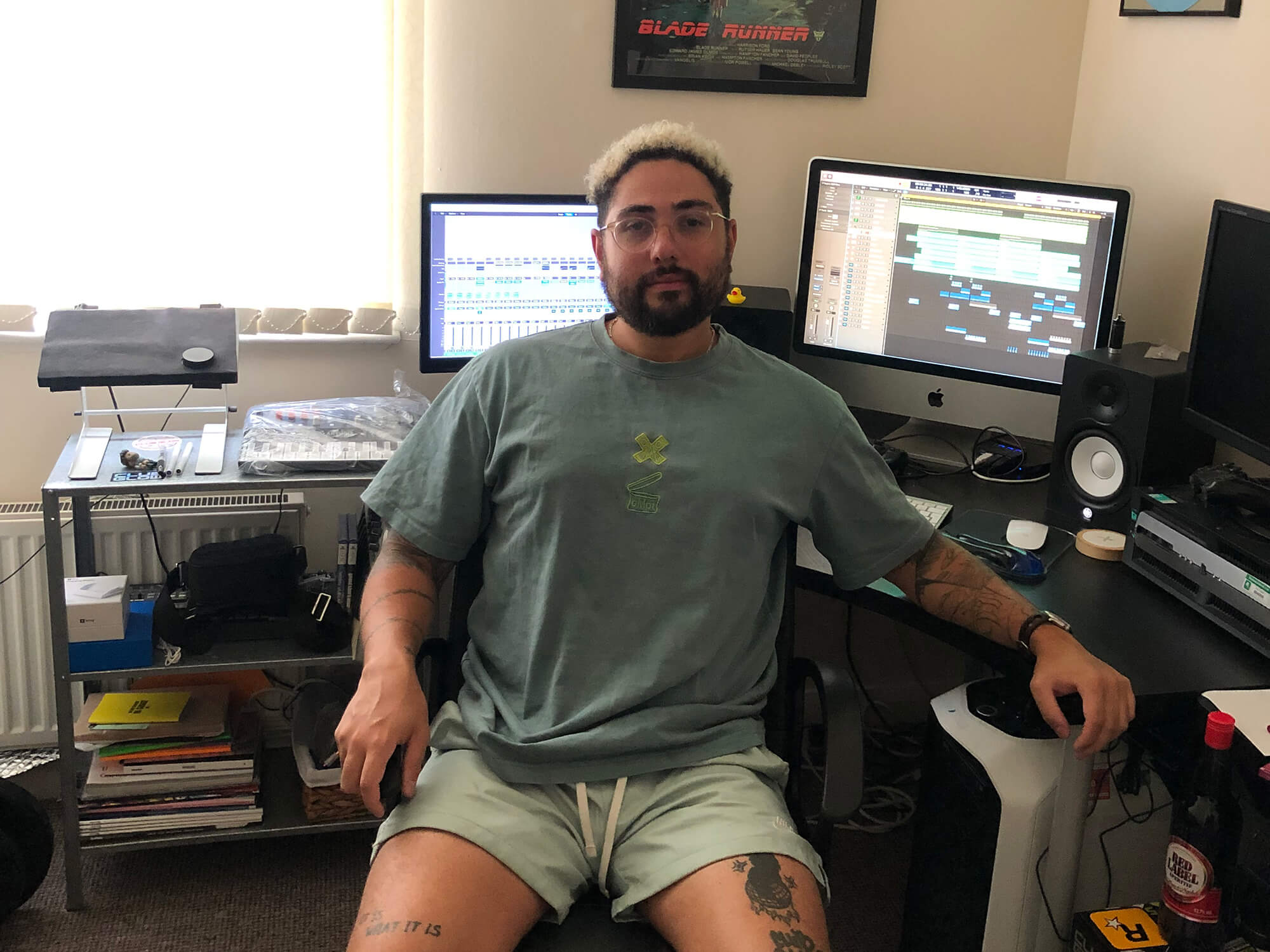 Denham Audio was raised in London, and found inspiration through grime music. Later, he moved to Sheffield – the home of steelworks and raving – where he, Mani Festo, LMajor and Borai formed record label and club night Club Glow. The label is all about breaks-centric rave music, echoing the days of M25 illegal warehouse raves, pirate radio and smiley faces. Denham Audio and his fellow label artists take reference from those hedonistic days but push the genre forward to a modern-day crowd.

MusicTech drops by Denham Audio’s Sheffield-based home studio, to get some insight into how he samples breaks using his Polyend Tracker, what it was like working with MC Trim and how he puts a unique spin on classic rave production techniques to create a unique, fresh sound.

Denham Audio! Glad to have you on Show Off Your Studio. This is the first release on your own record label, Club Glow. That’s a big deal. Were you waiting for the right tracks to put out?

Thanks for having me on the series! Yeah, a mixture of reasons really. We started doing the vinyl series in lockdown and Mani Festo was the first to put a 12” out, followed by Borai then LMajor. [It] was a tough trio of releases to follow so I knew I had to come correct.

You’re all about ravey breaks in your tunes. How do you source breaks? How has your approach changed to sampling and chopping up breaks over the years?

Anywhere I can, really. Sample packs are the main source for high-quality break samples but I spend a lot of time on YouTube going further into the rabbit hole of old 90’s tunes and I’ll stumble across all sorts of inspiration doing that.

My approach is the same in terms of sourcing samples. I still spend hours digging for stuff on YouTube, but I am a bit more conscious of where the samples come from. I try and find hidden gems in genres outside of rave and breaks. 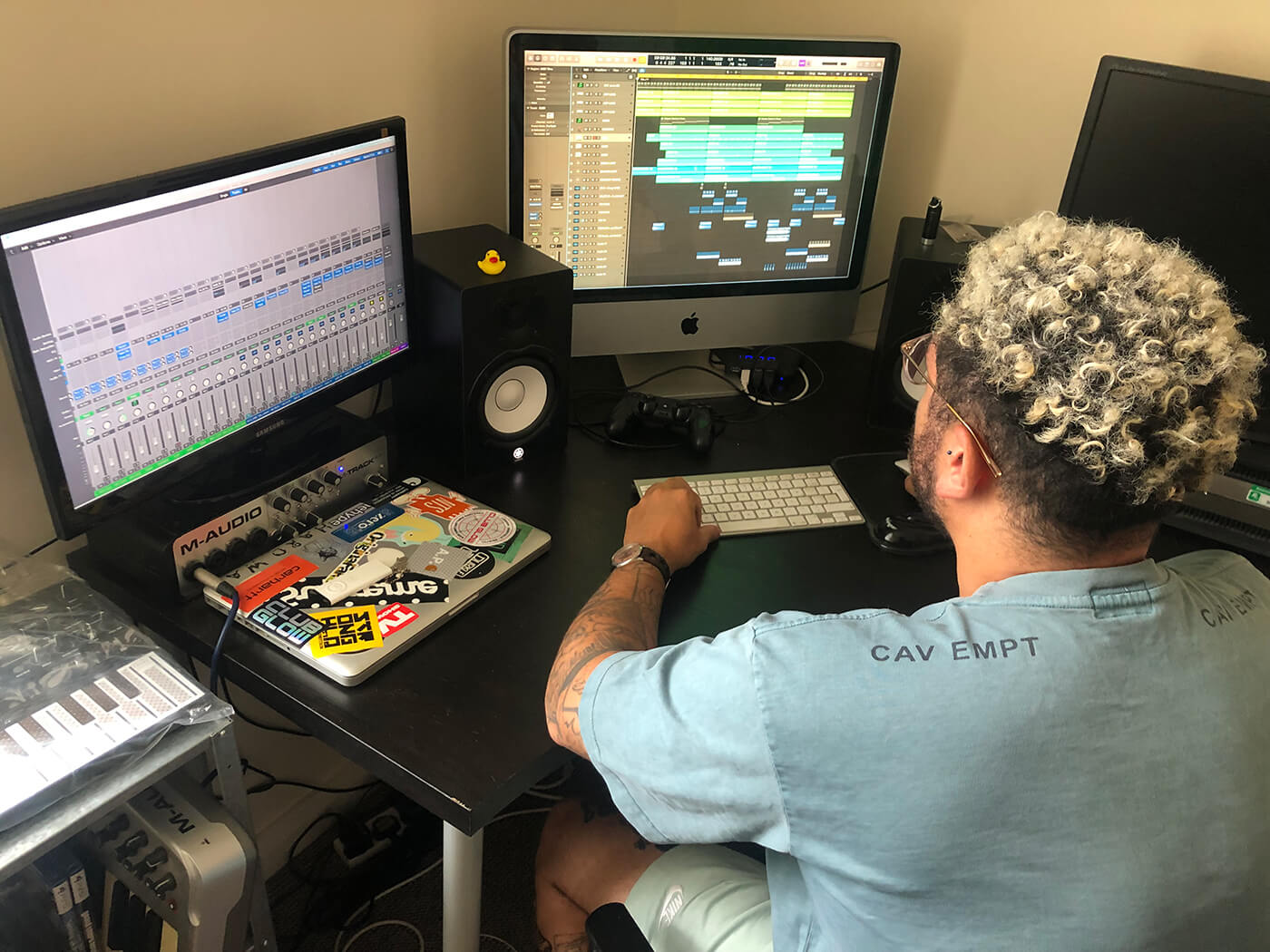 I’m currently based in Sheffield and have been here for around 10 years or so after I came here for university and never left. I’m rocking a simple home studio setup, but it’s been my place of inspiration for years so I know I can just sit down, plug in and get to work relatively easy.

Pretty much everything I make is made in this room. My desk has my old beaten iMac with my monitors and interface on, then to the left I have a metal plant shelf (shout out Interplanetary Criminal for the recommendation) from IKEA that houses my Polyend Tracker and Arturia Microfreak at a good height for just jamming and playing around. 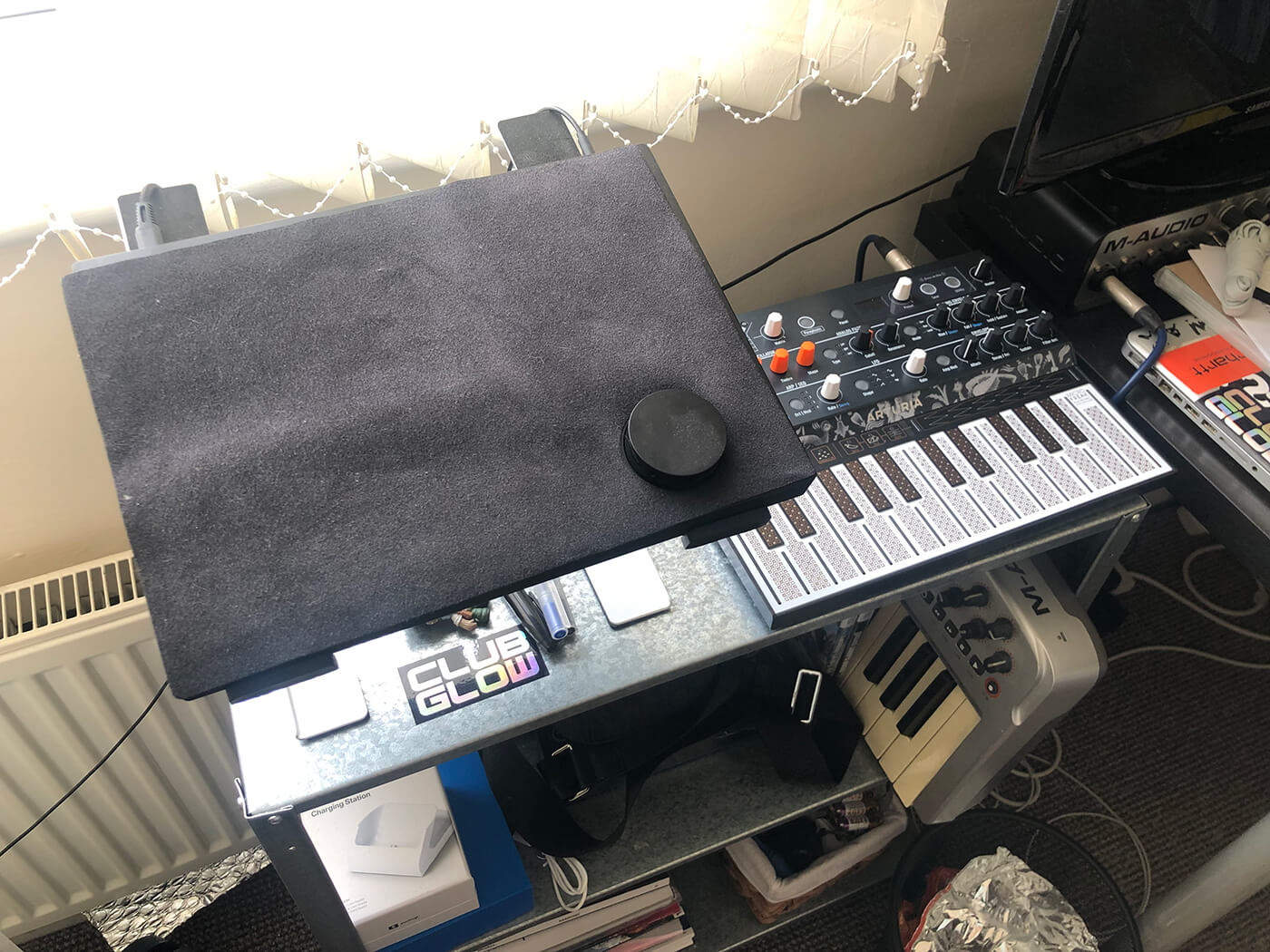 My studio is currently my office as I work from home too, so there’s a no-pressure environment. Sometimes, after I’ve sat at my desk for eight hours, it’s daunting to feel like I have to stay for another eight hours.

I tend to just open up an empty project and mess around with sounds. I’ll chuck [in] a handful of samples I like the sound of and see what works together, start to refine the idea and take it from there. Very rarely do I have a preconceived idea of what I want to make before I make stuff but, as I mentioned above, I could be listening to something on Youtube and that inspires a whole song out of the blue

I currently use Apple Logic Pro X – I’ve been using it since the beginning! I’ve tried Ableton Live but just can’t wrap my head around it visually. 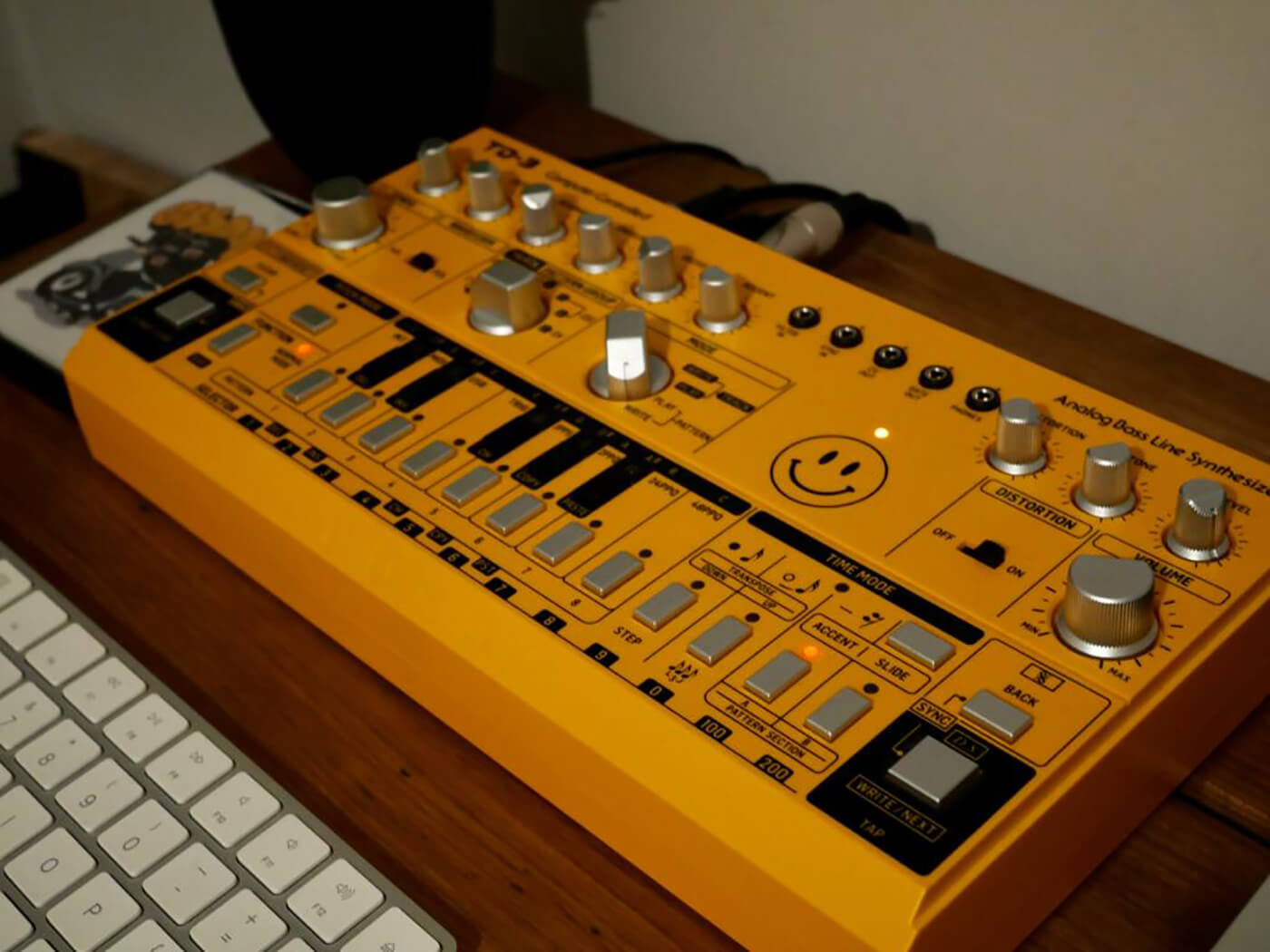 Probably the Polyend Tracker (shout out Pete Cannon). I’ve struggled with the intricacies of programming breakbeats so that was the bit of hardware that I found that allowed me to achieve what I wanted to do in quite a quick and easy manner.

I’m going to give a special mention to the Behringer TD-3. It is probably my least favourite as it’s quite the pain in the arse to get what I want out of it but when I do – my god, is it satisfying!

What synth or effect can be heard the most on the Thirty Eight Snub EP?

There are a few elements going on – I’ve got the nice pad sample at the start with stock Tape Delay and Platinum Verb on, then on breakdowns, there’s a Hoover stab sample with Platinum Verb again. 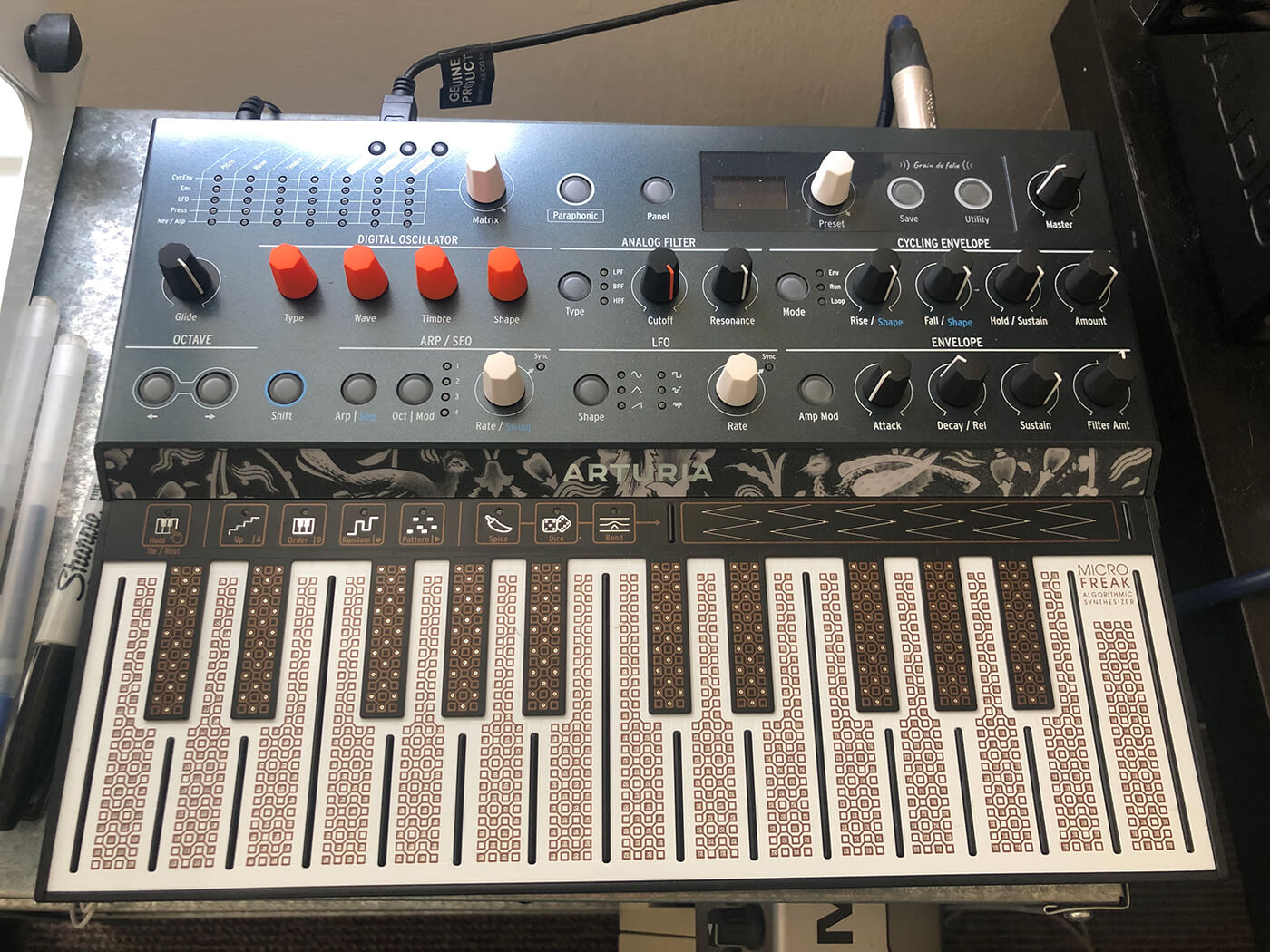 What was it like working with Trim for the lead track on this? How did you work together?

It was, and is, insane. I grew up in London listening to grime back in the day and Trim is my favourite MC, so when putting this record together I wanted to make something personal to me. I hit him up over email and I think within a day or two I had the rough vocals ready to work with.

It was a smooth process and he’s a super friendly guy, professional and on it with bouncing ideas back and forth.

Look out for some more tracks together in the future…

We’ve heard about the hardware in the studio, but what about software? Which plugins did you use and how did you use them when creating this EP?

This might sound boring but I use mostly the stock plugins within Logic Pro X. I love the Tape Delay with Ultradub setting on for added atmosphere, Space Designer for reverb is really nice too – I tend to flick between that and the Platinum Verb. Then I use the stock Tremolo, Compressor, Flanger and Overdrive Distortions. I have a handful of third-party plugins I use – Native Instruments’ Massive and Xfer Records’ Serum, Rave Generator, and TAL Chorus which is useful for pads and synths. 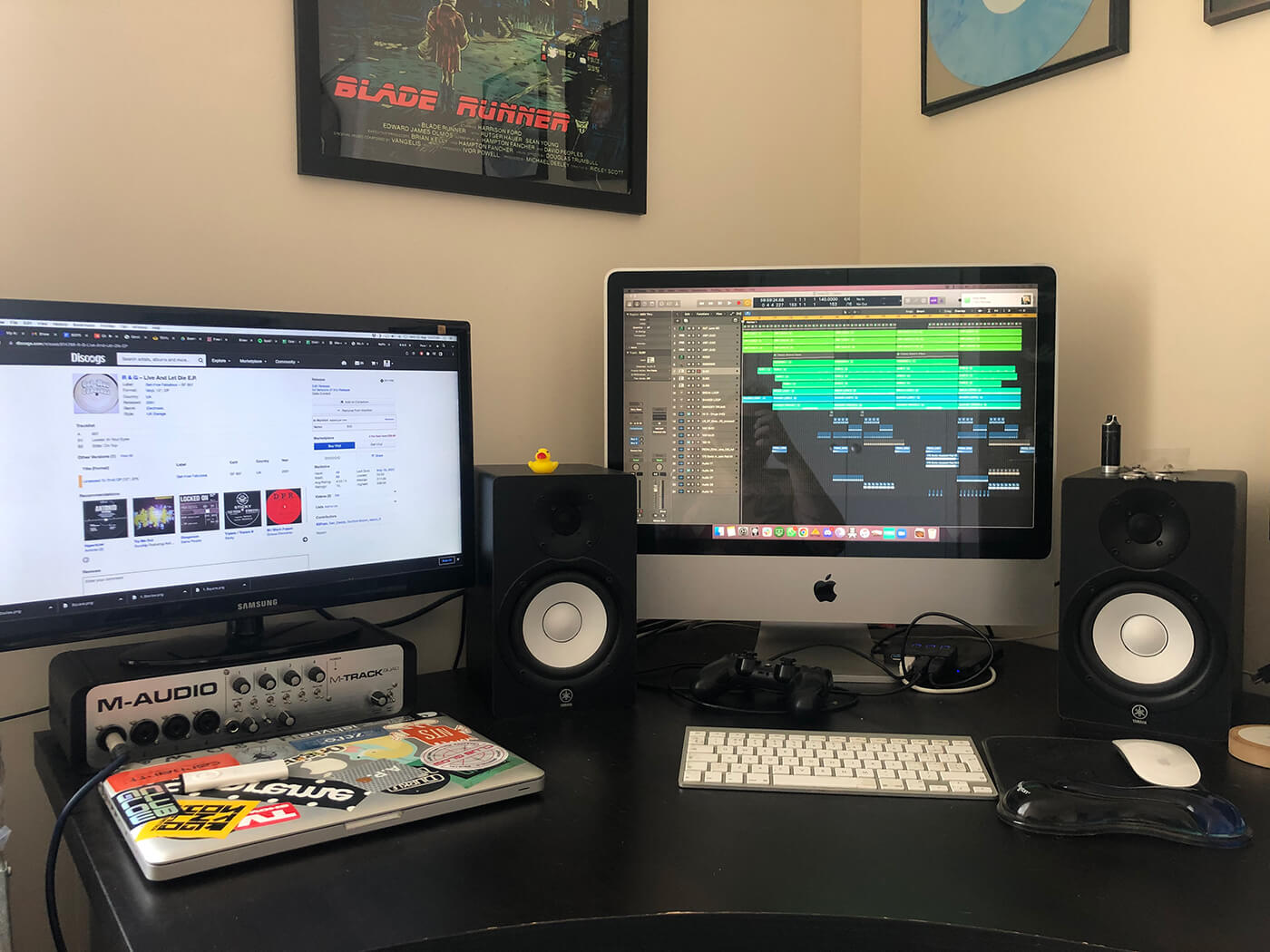 With rave music that’s so embedded in the past, do you find a balance between sounding from the 90’s and the present day?

It’s important to not sound like you’re making 90’s music, to be honest. We can pay tribute and acknowledge the inspiration of course but I think it’s our duty to keep it moving forward as a genre the best we can. I’ve tried to do that by working with Trim for example, or working with influences from other genres. I’m interested in creating something I hope is interpreted as new and fresh.

The Polyend Tracker is the most expensive bit of kit I have at the moment, but it’s 100 per cent worth it. It’s solved a problem I was having with chopping and cutting breaks in more detail and it’s now second nature to my workflow.

Think I might treat myself to some new ADAM Audio monitors. I’ve had these Yamaha’s for a long time so probably due an upgrade. 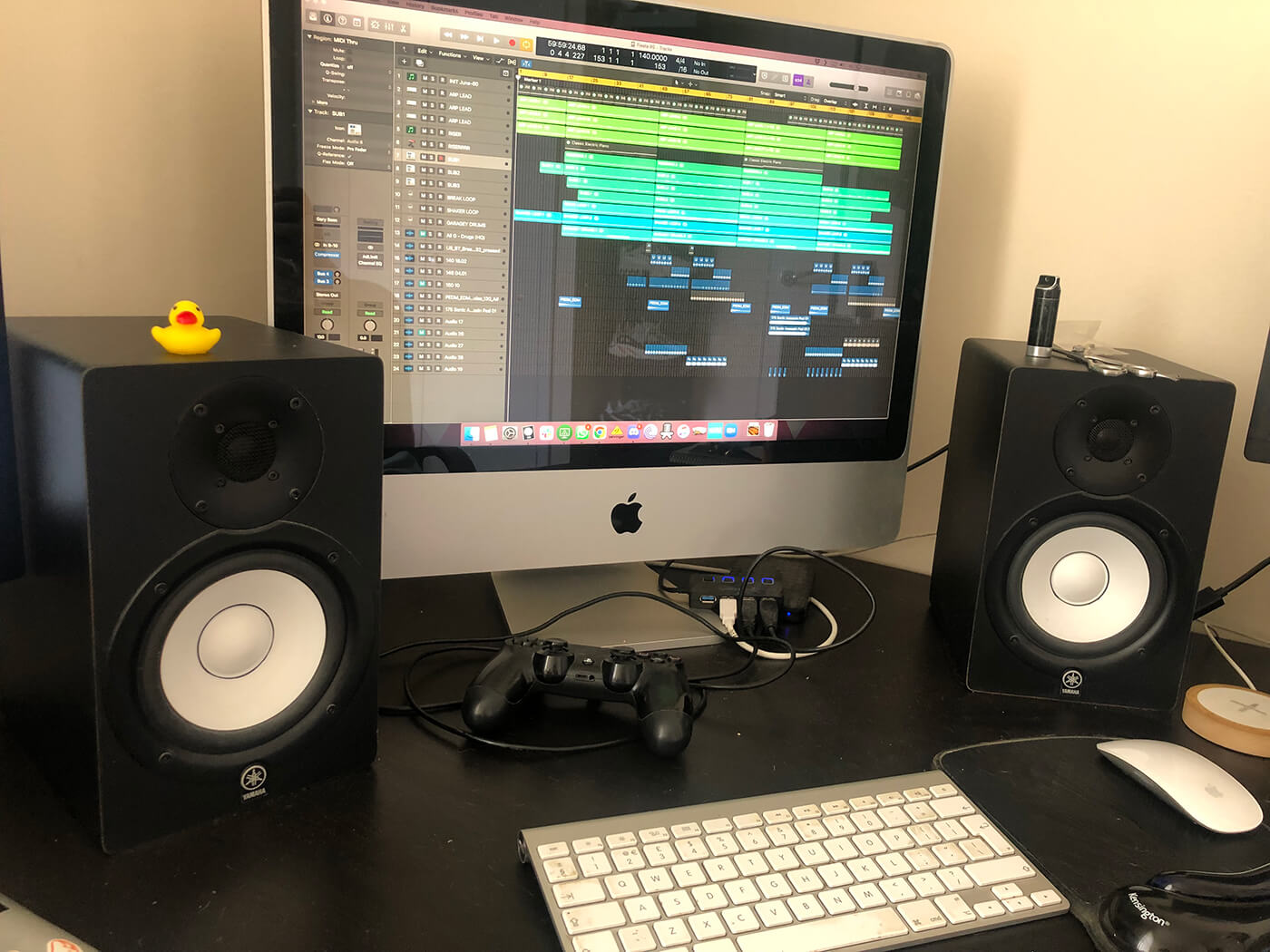 What is your dream piece of gear ?

Something like the original Roland TR-808 would be sick. I like a lot of Chicago, Detroit, and Dance Mania stuff so it would be fun to play around on that and see what I could do. 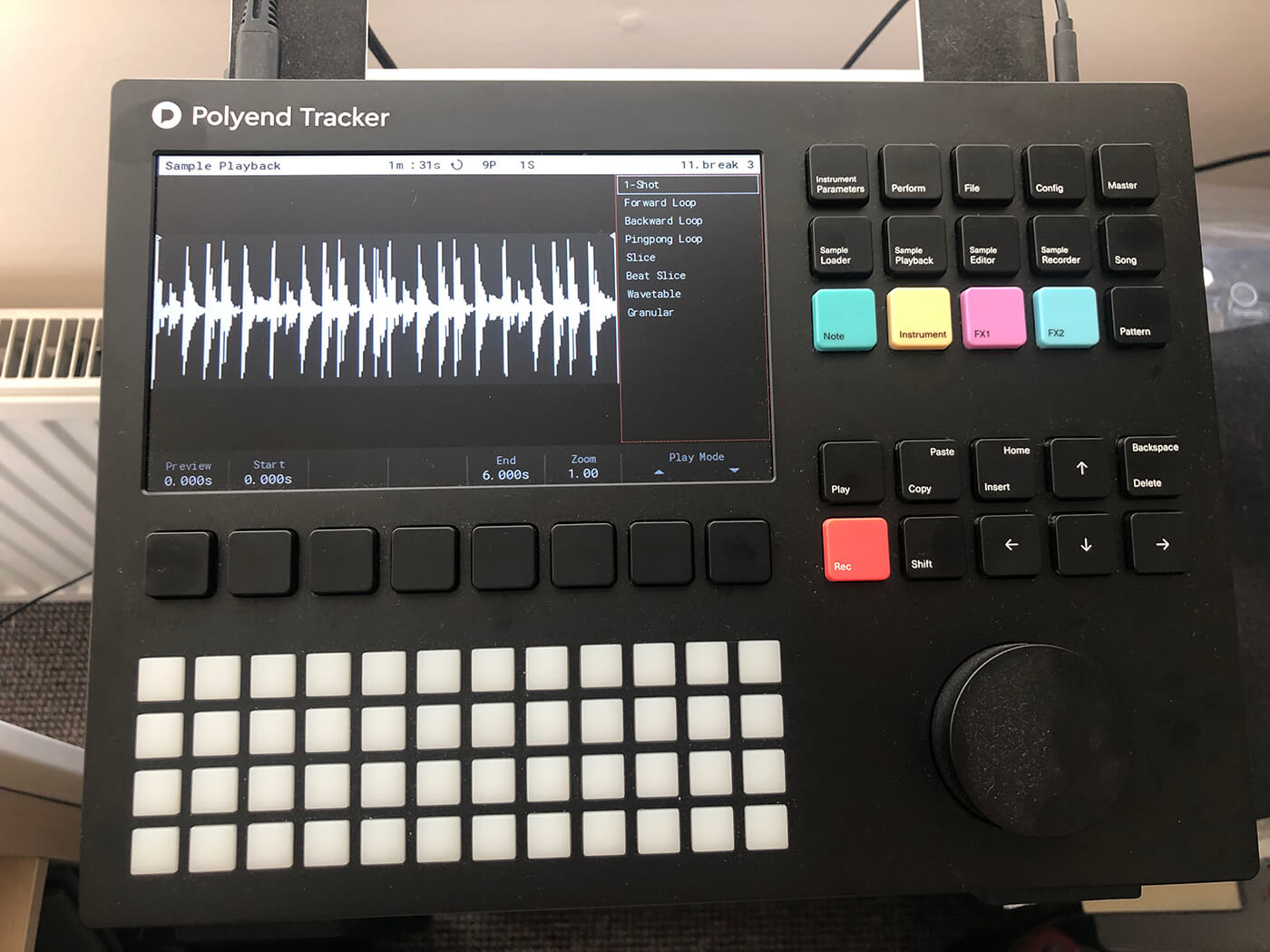 It’s cliché, but make music for you. Don’t try and copy or sound like other producers because they already exist. Everyone tells you this but it took me a long time to actually realise it. The moment you start making music for yourself and don’t worry about what people think or sounding like other people, the more you’ll realise people take notice of what you do.

Ultimately, just have fun with it and don’t put pressure on yourself to smash it straight away.

Watch YouTube tutorials on whatever hardware you think you need first. You can spend fortunes on equipment that you never use or never learn to use properly or even worse, can do in the box. I spent a good month or two doing that with the Tracker before I bought it.

Also, if you can get access to try before you buy, it’s always helpful to be hands-on too.