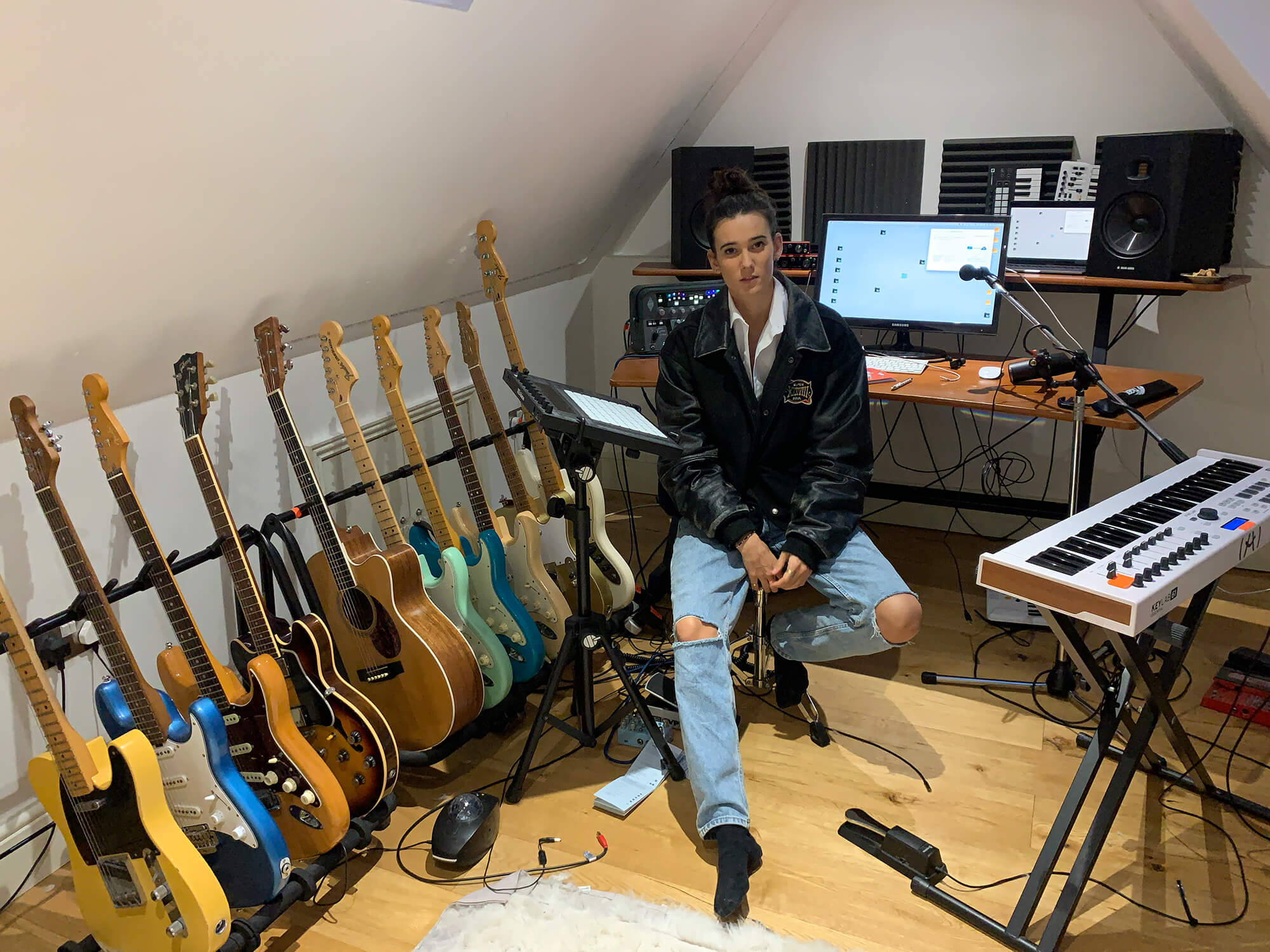 Show Off Your Studio: Behind the scenes at Annie Wagstaff’s attic atelier

“There’s no need to spend thousands and thousands of dollars on gear – you only need a very simple setup to start creating great music.”

Annie Wagstaff, better known online as AnniePlaysGuitar, has found her niche on social media. Her 260k Instagram followers and 45k TikTok followers adore watching her jam out in her room with her guitars, MIDI gear, and pedals. Although Annie never intended to cultivate a following online, her supportive audience has inspired her to keep creating, and she’s now started transforming her performances into an album.

We head upstairs to her attic to learn about her journey as a content creator, and what advice she has for aspiring artists wanting to build a community and get their music out there. She also shares the gear that is essential to her workflow, including mics from Shure, Push by Ableton, and an enviable collection of beautiful guitars.

Hey, Annie! You’ve been posting music on social media for a few years now. How long did it take you to figure out the best way to present your content?

When I started creating these videos, it wasn’t to use them for social media. I’d just film what I was doing so that I could remember what I played and have it to look back on. Much like when I vlog, I make videos because I love editing them and remembering what I got up to.

I put the videos on YouTube to see if anyone was interested in knowing what goes on behind the scenes of what they see on socials. Then I thought, ‘hmm, well, I may as well put these [on social media]’, and it turns out people like seeing these short songs that I make. So I kept recording, filming and uploading.

It was never a thought-out process of ‘how should I present what I’m doing?’ or ‘what content should I be doing?’. I always just do what I want to do. It’s obvious to see when things are natural or not, and I can’t force myself to be creative or film something it doesn’t come off authentically. Though I try to mix things up a bit – maybe do a guitar video, a behind the scenes video or post a few pics just to make sure there’s a variety of content. 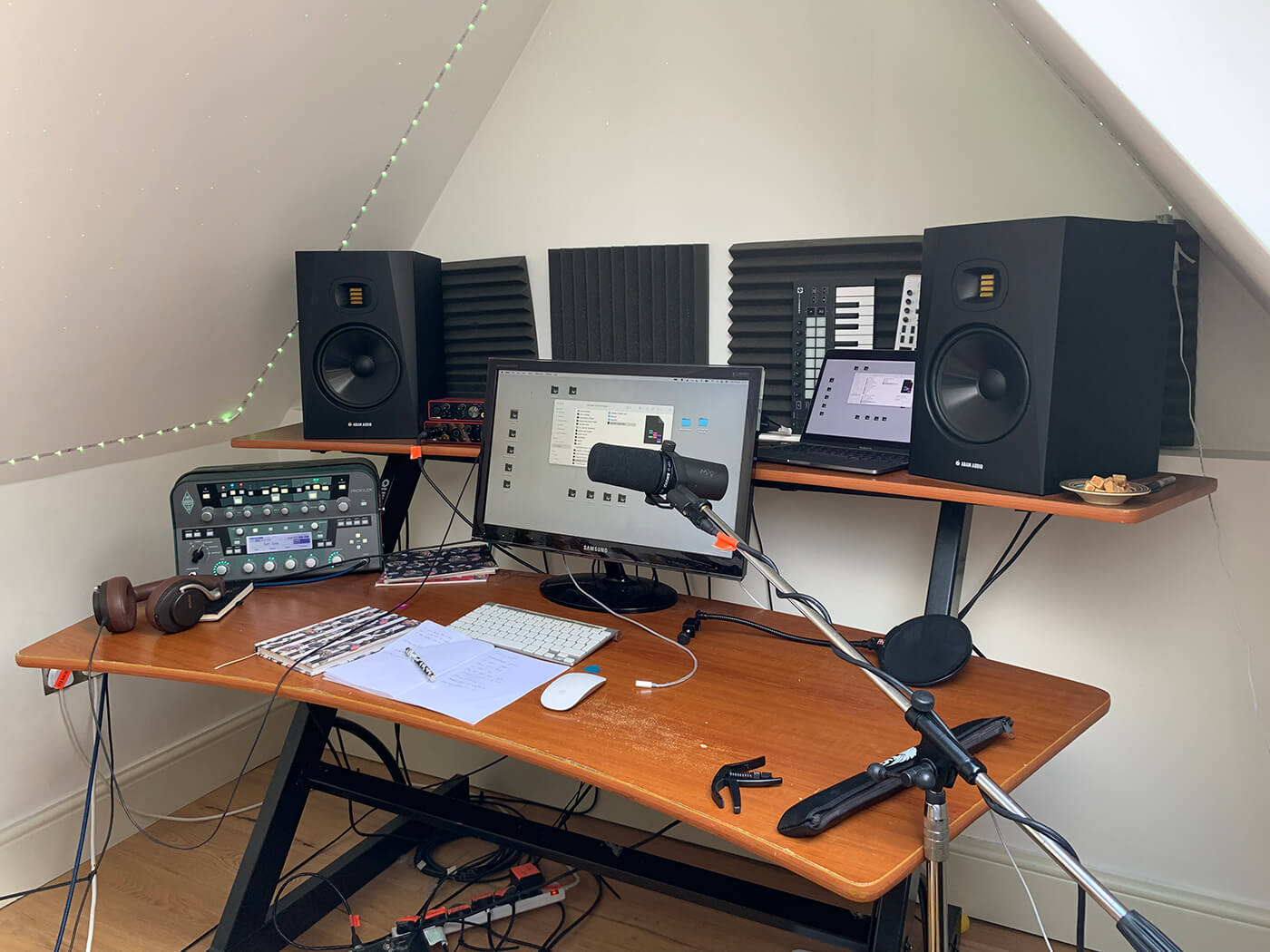 What’s your general process in capturing video and audio for social media?

My process stays pretty much the same each time. I run my guitar through my Kemper, then into the Focusrite Scarlett and Ableton Live. From there, I connect the Shure SM7B into Ableton and the Arturia KeyLab and Push with USB. I control the session with Push and record the audio in arrangement view.

I usually film on my iPhone (which I attach to a mic stand on a gorilla pod and then sync the audio with the video) and ta-da. I’ve found this process works for me, and if things were going to take ages to set up, I would be less motivated to do it. Things need to be quick, easy and ready to go.

You’re in the process of transforming some of those jams into an album, right? How’s that going?

Yeah! I am. The EP is done. I’m just waiting on the artwork to be edited, and then we’re good to go.

I’m ridiculously excited but also terrified to put it out – it’s pretty much been my life for the past year. Music is the only way I can get out what’s in my head, and that’s what this EP is. It’s taken so long since I went through so many versions and deleted projects figuring out the sound and making it coherent. I love the process. When you hear the mastered version comparing it to the demo, it’s a totally different experience.

It seems like you’ve got the home studio setup nailed. Can you tell us a bit about it?

I love my studio. It’s in the roof, so it feels like a den, and it’s got a nice, cosy vibe to it. My setup is relatively simple. I have a few Ableton templates for different styles, so I just click what I’m feeling, and the MIDI and audio channels are ready to go. I can’t imagine anything more frustrating than having a spark of creativity and having to set up a bunch of gear to get it down.

My setup has been the same for a long time – I had a similar setup when I was 14 and learning how to produce. Although, I’ve switched things in and out and upgraded gear, such as different speakers, mics, interfaces, and computers. I recently added the Shure MV88+ Stereo USB microphone, which I can use to record audio at a moment’s notice because it’s so portable.

What is your favourite piece of gear right now?

I just got the Blooper pedal by Chase Bliss Audio, and it’s so cool. It’s a looper with effects and mods. It gets the craziest sounds out of something you just played in, and I find it seriously inspiring and creative. 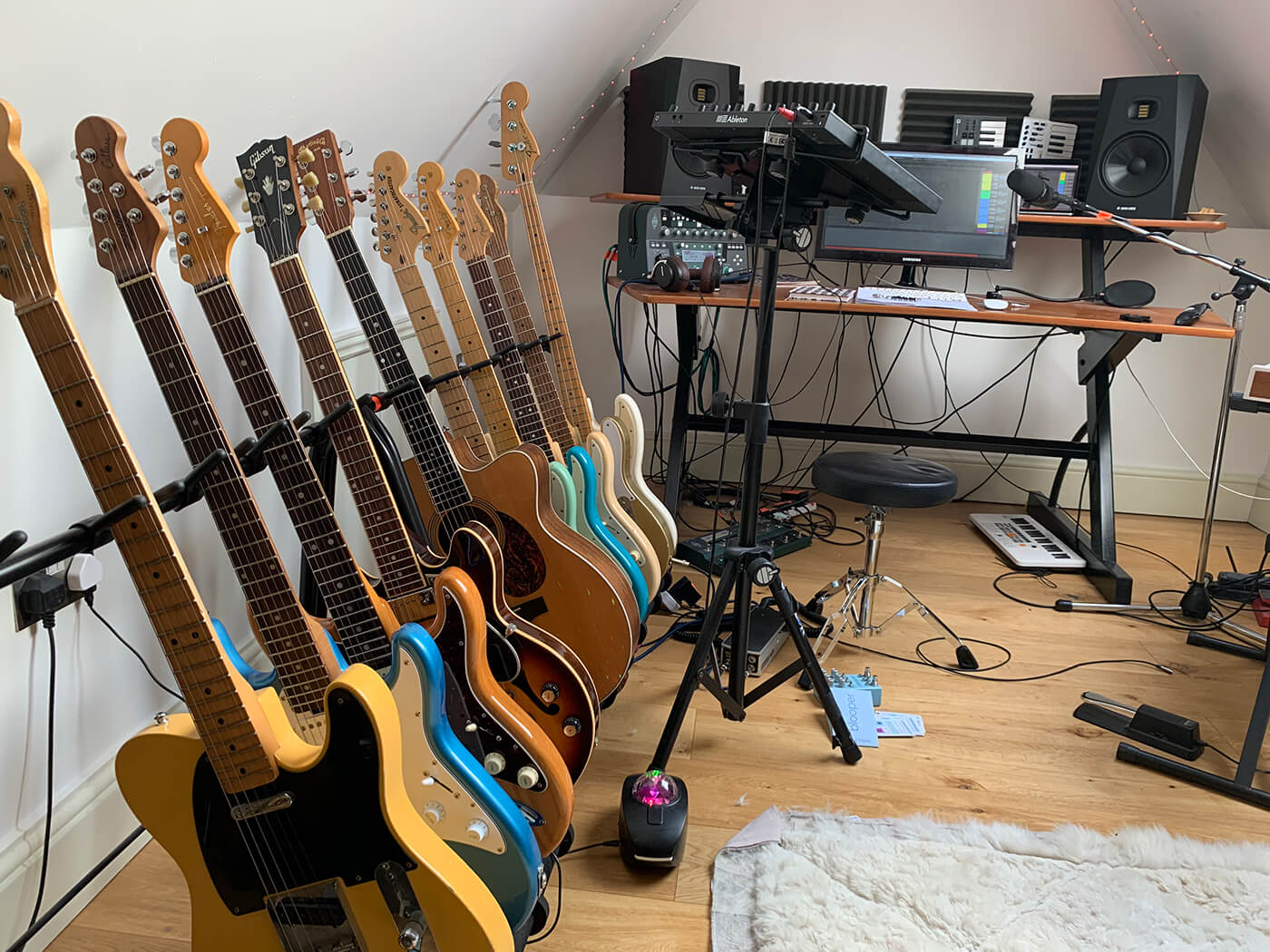 Can you tell us a little bit about your guitar collection?

I’ve never sold a guitar, though a few are at my parents’ for keepsake (the classical ones I started learning on and my first Squier). I love Stratocasters, so I have a few, but my favourite is my Fender American Standard Strat. I’ve had it since I was 13, and it was my first nice guitar – I learnt almost everything I know on it, and it’s such a beautiful guitar that barely ever goes out of tune.

I have a Gibson ES 339 that I bought in Boston when I was at Berklee, and it always reminds me of sitting in the shop playing it for hours before eventually going back to buy it. I have the most beautiful gold Telecaster ever seen, custom-built by LsL guitars. The fretboard is roasted birds-eye maple, and it plays beautifully.

I only have one acoustic, but it’s still the nicest I’ve played. It’s a Martin OMC160-GTE. Martin doesn’t make them anymore, so I’m holding on to it forever. I have a couple of hollow bodies and a MIDI guitar which is fun to play around with. They all have different sounds and feel different to play.

It’s my laptop, and yes, it was 100 per cent worth it. You can often find less expensive instruments or pedals and still get great sounds but I will always go for the spruced-up computer. It’s running everything that is feeding into it, and there is nothing more frustrating than being hindered by a tech. 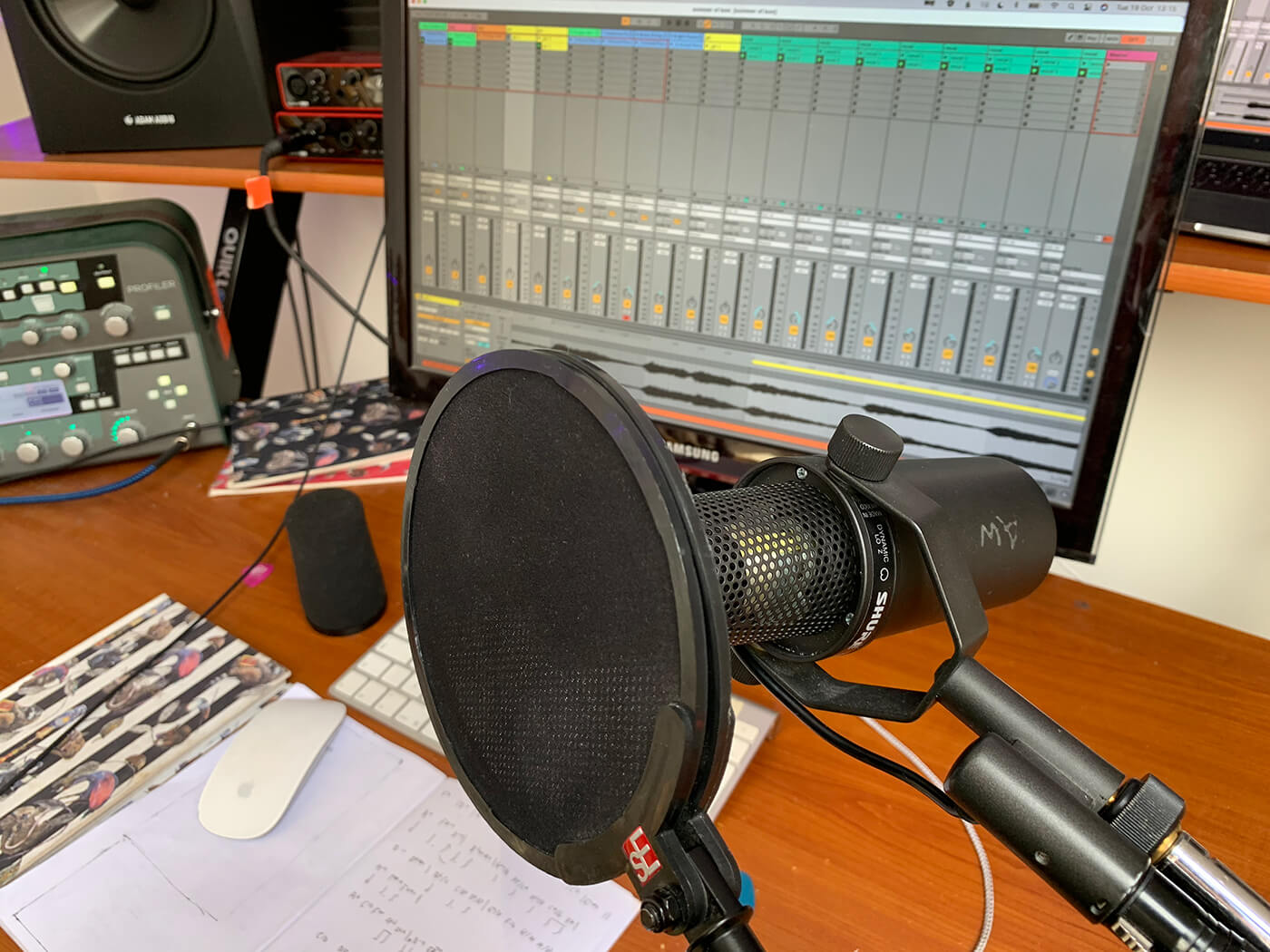 A Sequential Prophet 5 or Roland Jupiter-X. It feels different finding sounds on a physical synth rather than changing parameters in a plug-in.

I’ve wanted a gong for a while. A huge 40-inch gong. I’m not sure why – maybe so I can do gong baths? Maybe a few bowl gongs to go with it.

Oh, okay, well, I just got a recorder, and it’s so much fun – I feel six years old again. That would entertain me for a long time. Or I’d take the Shure MV88+ Stereo USB Microphone because it’s super portable and doesn’t need an interface, so I could record things wherever and whenever. 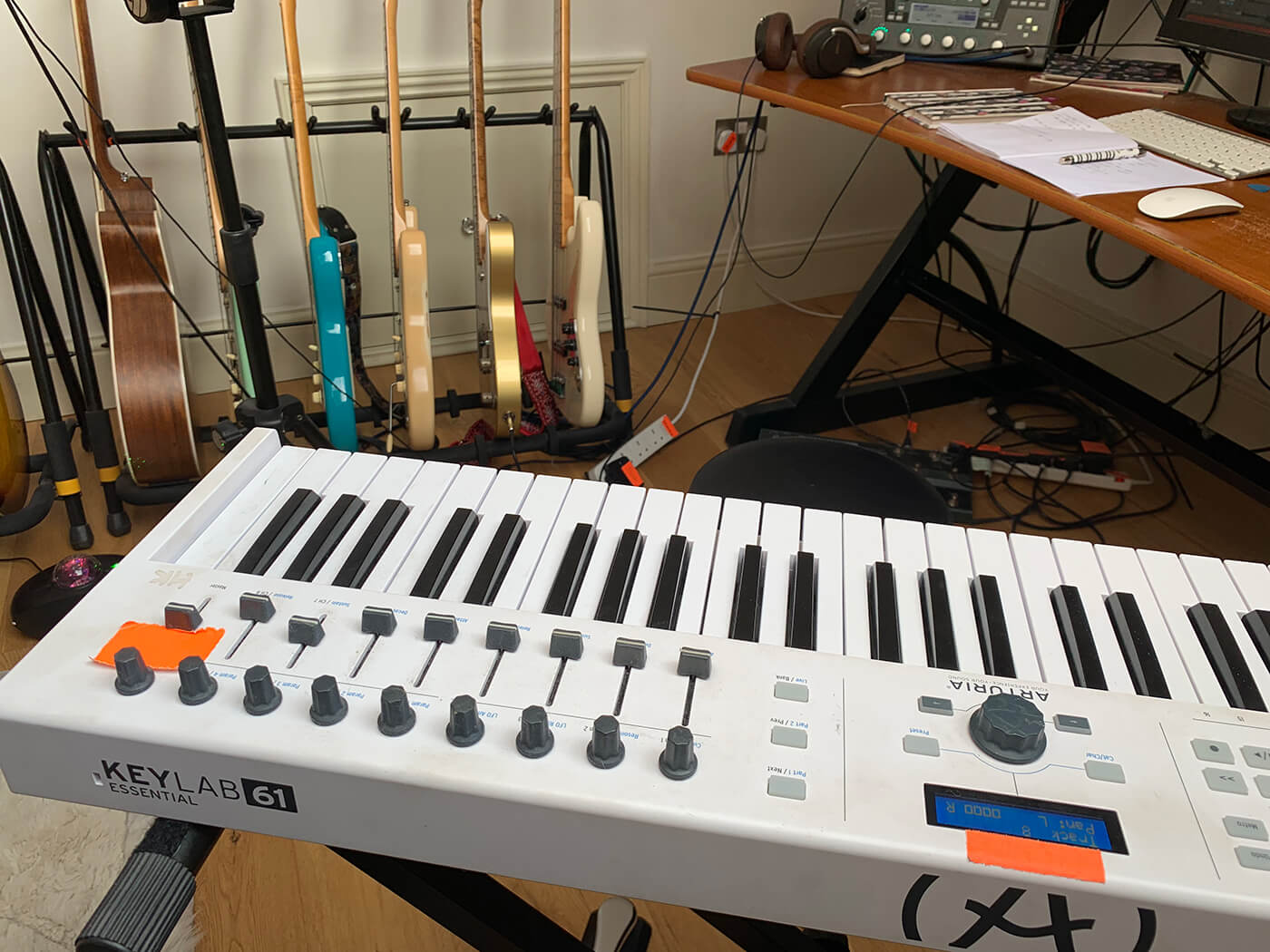 Do as much of it as you can, and always try new things to develop your skills. Watch production rundowns by producers you love. Every time I watch something like that, I learn something new.

You’ve managed to build a community on social media. How has that impacted your creativity and fan engagement?

Yeah, social media is a huge part of the industry now. It allows you to create your own fan base and business around your music. It means you don’t necessarily need a label and can make a living without being Ed Sheeran.

It’s something that is now essential and will only get increasingly important. Sometimes, I feel it inhibits my creativity – I put pressure on myself to keep content coming. I have a love/hate relationship with social media, but interacting with fans and reaching a new audience without funnelling loads of money into marketing is amazing. I believe that’s something worth spending the time on. 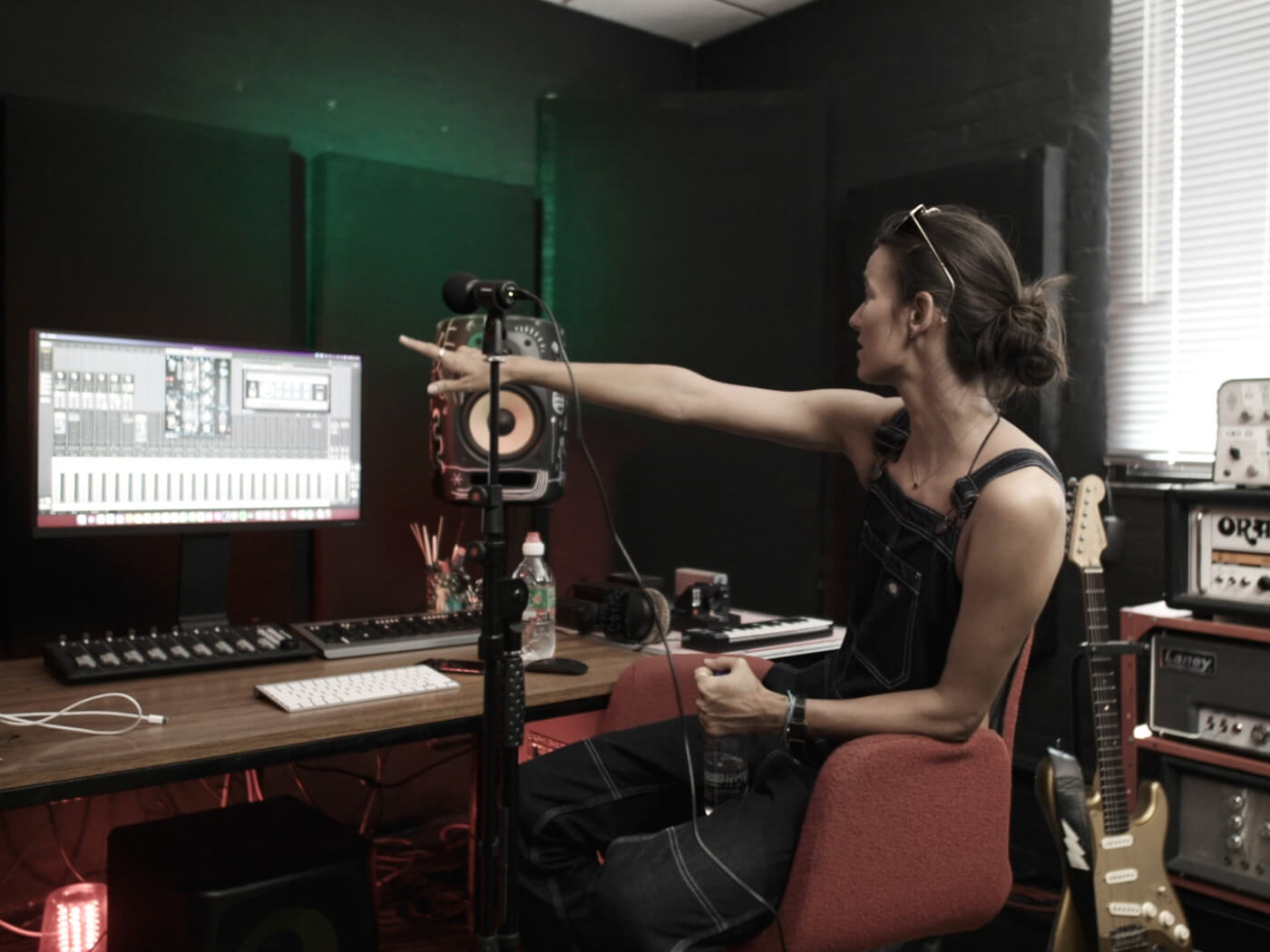 There’s no need to spend thousands and thousands of dollars on gear – you only need a very simple setup to start creating great music. Also, if you go small and portable, you can take your studio wherever you go – on holiday or wherever is inspiring.