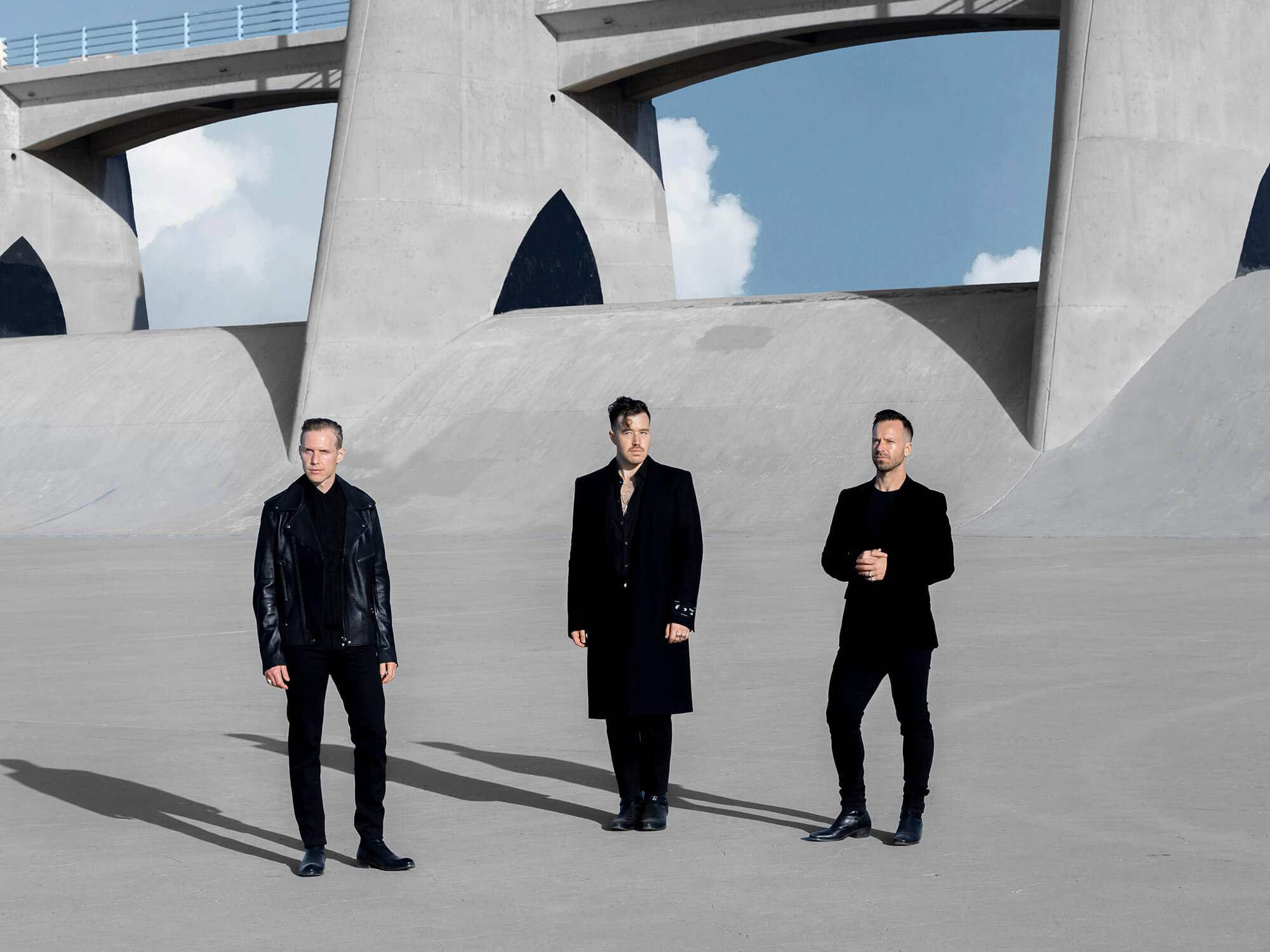 RÜFÜS DU SOL dissect their new album Surrender: “When we write, we aren’t thinking about a specific aesthetic. We’re searching for a feeling“

James Hunt, Tyrone Lindqvist and Jon George talk to us about the new RÜFÜS DU SOL and share their new rituals, techniques and inspiring gear.

RÜFÜS DU SOL, Australia’s introspective electronic music trio, live to explore. Their long, progressive and dramatic songs take listeners on gripping journeys, with multi-layered build-ups and climaxes complemented by emotive vocals and melodies. In the eight years since their first album, the Grammy-nominated trio – comprising James Hunt, Tyrone Lindqvist and Jon George – have made their way from New South Wales to Berlin and LA, capturing the essence of each city in their music. In their fourth album, Surrender, the trio embarked on a journey further into themselves.

Here, James, Tyrone and Jon talk Surrender, tell us about the techniques and instruments that keep them inspired, and discuss their rituals for keeping the studio sacred, plus what advice they’d give to their younger selves.

Congrats on the new album Surrender, RÜFÜS DU SOL. You’ve created a darker sound in this album. How did your approach to music-making change this time around?

James Hunt: “The pandemic gave us a lot of time to explore sonics and to try different things, such as drum programming and experimenting with sound. There were a few tracks on Surrender where we were able to reference Nine Inch Nails and other acts from the 90s that degraded their sounds. We were finding different ways to chalk, manipulate, and stretch sounds so they were destroyed but beautiful.

“We also chopped up Tyrone’s voice on a few tracks, such as Alive – Reprise. The different warp settings in Ableton Live made his voice feel like it was travelling through the time warp in Interstellar. We also sent his voice through a Korg Kaoss Pad in On My Knees, which made it sound claustrophobic and phonetic. Radiohead influenced the Kaoss Pad trick – they are amazing at creating darker feelings sonically and melodically.”

Since your debut, you’ve made music in a variety of cities. How has each place informed your writing and production?

Tyrone Lindqvist: “We wrote our first album, Atlas, on the coast of New South Wales in Australia, our second album, Bloom, in Berlin, and the third album, Solace in Los Angeles. We also made Surrender in LA but, instead of being made in a different location physically, it represented a completely different experience for us in the city.”

Jon George: “We’d just gone through the initial excitement of LA when writing Solace. We were overwhelmed by the glitz and glamour of what the city has to offer, sometimes getting lost in the washing machine of LA. So by the time this record rolled around, we needed a halt, and – even though it was a horrible way for it to happen – we were lucky that the world stopped. We took advantage of LA in this different setting. We set up homes for ourselves, set up new responsibilities and honoured those with our partners.

“We reconnected with ourselves and with the city while creating comfortable lifestyles for ourselves that allowed us to write the record. We now have a bunch of beautiful friends and we feel much more settled in LA. All of those different feelings shine through on the record.”

You recruited Curtis Harding and a children’s choir on Surrender. What motivated you to seek out these vocalists?

Tyrone: “When we write music, we aren’t necessarily thinking about a vocalist or specific aesthetic. We’re searching for a feeling. Once we find a feeling that excites us, we try to stay true to that and explore the different corners of that feeling.

“On a few songs, such as Surrender and Make it Happen, there was youthfulness, innocence and sweetness in the melodies. It felt natural to have a kids choir sing one of the melodies. Specifically, The Beatles-inspired lyric “love can change your life, love can make it happen”. It’s so simple and pure, so having kids sing it brought a level of virtue and wisdom along with it.

“When kids say anything it feels wise, and there’s a lot we can learn from them. I have a two-year-old son that I feel influenced the track.

“With Curtis [Harding], we knew that we wanted to find a unique vocalist that was strong in the soul/gospel world or that felt bluesy and raspy. We went on a deep dive, searching for that voice to match the melody. When we came across him, it was just a resounding ‘yes’. He was at the top of our wishlist and he was willing to give it a try. He sent back the vocals and, as soon as we heard it, we knew it was exactly what we were after. It feels so euphoric, almost like a cry from the heavens, that he nailed it. Surrender ft. Curtis Harding is the first vocalist that has featured on a RÜFÜS DU SOL song title.

“It was a privilege to get to work with both the kids choir and him”.

How do you set the atmosphere in your studio? You’ve previously used a Shaman to create different worlds – what other ways do you ensure the studio is the right vibe for your mindset?

Tyrone: “We decorate the studio with plants and sound-proofing. It’s an apartment in Hollywood that used to be Jon’s. There was a time when we were co-existing there – he was still living there while we had the studio space. When he moved out, we transformed it into a studio with a piano upstairs, a bunch of analogue synths in our room, and the drum kit in the wardrobe.

“We had all the toys and gadgets that we could find at our fingertips. However, the biggest change and influence on the record was how we implemented structure into our daily routine. We would start the day with meditation and exercise. Part of our writing period involved a sauna, using an ice bath afterwards, and then talking through any resentments or ruptures that we had between each other.

“We’ve been in a band together for over ten years and not really talked through a lot of that stuff, so this was a healthy opportunity to do it. Then, we’d leave that behind and walk into the studio with clear minds, which helped keep the studio as a sacred ground for us to create. If we had to have any difficult discussions, we’d go for a walk and take it outside.

“We’d also meet for coffee before going into the studio and outline what we wanted to achieve, which was helpful. We worked from 11 am to 7 pm and that was new to us. On our previous record, we worked around the clock into the early hours of the morning and lived quite an unbalanced life, with art at the forefront and self-care put to one side. Surrender was a real learning experience – being able to create while nurturing our health.”

From Innerbloom to Underwater, and now Alive and See You Again, so much of your music feels like a journey. How do these journeys begin?

James: “We’re not thinking about the end result when we’re creating music. We’re thinking about what inspires us at the time. We share a lot of music with each other, showing each other tracks and albums. We’re pretty good at nerding out about the specific parts that inspire us.

“For the last two records, the accumulation of some amazing analogue synthesizers and drum machines was a big change to our process. For Solace and Surrender, we set up several studio spaces where we could jam with each other on different instruments at the same time. We have the Sequential Prophet-6 and OB-6, and the Minimoog Model D, which were huge proponents of the sound of Solace, and we explored them further on Surrender.

“The sonic capabilities of these machines are so rich. For example, Underwater came from a patch that we found on the Prophet-6. An arpeggiated delayed part starts the entire song and quickly bursts into the entire track. That’s usually how a lot of the best and well-formed songs come to us. The same happened for Innerbloom. It presented itself chronologically as the chords were written, then the bassline, the beat, the lead, and then the breakdown and the overall sonic progression of the song.”

Jon: “We have a lot of fun once we realise what the identity of the track is. With more indulgent tracks, we like to not stick to any rules and hold them as long as possible, introducing new elements and then releasing right towards the end”. 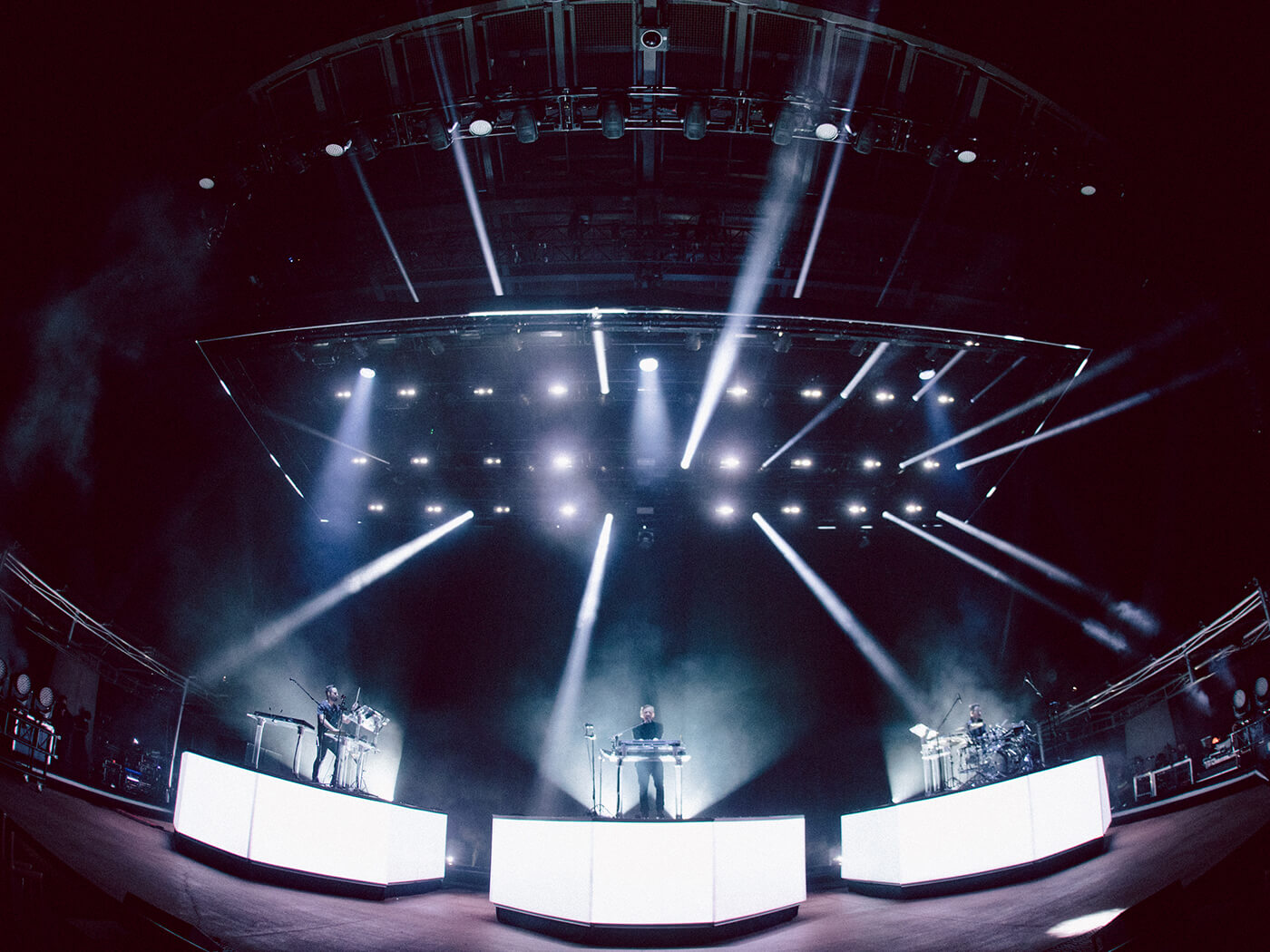 What music tech gear is inspiring you right now? Is there anything you’re eager to get your hands on?

James: “The Moog Grandmother looks sick. It’s a semi-modular synth so you can do some interesting patching without diving into the full-modular wormhole. It seems like a nice self-sufficient system in which to create interesting sounds.

“We’re really keen to get our hands on the UDO Super 6, which our good friend Cassian has. He’s an amazing mix engineer and producer who mixes all our music. It sounds amazing from what he describes. It’s got a pure stereo sound for each of the oscillators and just sounds like a really fat-sounding machine.”

Jon: “We used Output’s Thermal to beef up synths such as the Korg MS-20, the Prophet-6 and Minimoog, so that’s an inspiring way to thicken the sounds for us and bring some grit to the track.  Our go-to’s are the Soundtoys plug-ins, Valhalla reverbs and delays, and the RC-20 tape emulator. We routed a Flea-47 mic into a Neve preamp on Tyrone’s vocals with a Tube-Tech CL1B compressor to give his voice some warmth.”

Tyrone: “All guitar on the record is the Fender Jaguar with Humbucker pickups”

What advice would you give to your younger selves, pre-Atlas era?

Jon: “We’ve learned a lot over the last eleven years now of writing music together and touring. Sometimes you need to just learn things as you go. My biggest advice to myself would be: make sure you give time to yourself, look after yourself along the ride. It’s easy to get swept up in all the excitement and the never-ending opportunities, and never stopping to take stock.”

Do you have any advice for aspiring producers and artists?

Tyrone: “Just to dive in as deep as you can into the thing that you love to do. That would be the advice that I would give to absolutely anyone.”

James: “Look only to yourself as a point of reference for what you’re making. It’s easy to think, “what will other people think of this thing I’m making?” The only true measure of knowing something’s worth is that if it moves you, then it will move someone else. It’s easy to forget that but that is the only true metric you can use to evaluate a song’s value.”