Show Off Your Studio: Levitate’s LA studio is home to futuristic audiovisual endeavours

Learn how the genre-bending artist uses his limitations to his advantage. 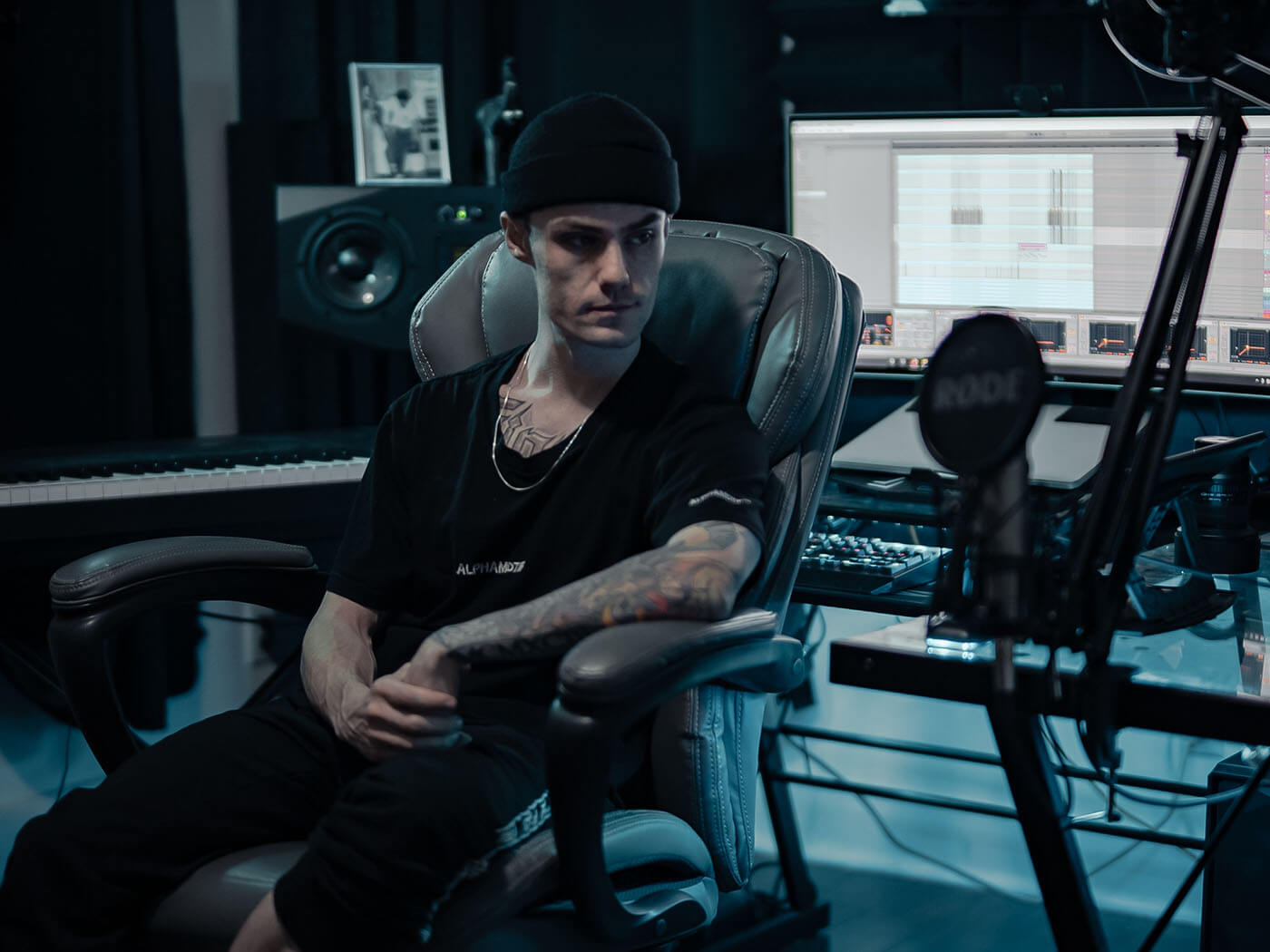 Hailing from Seattle, Levitate has been rising up with his left-field, futuristic productions and audiovisual experiences. He’s released music on Bassnectar’s Amorphous Music, Noisia’s Vision Recordings, Borgore’s Buygore label, and – thanks to a carefully crafted live Ableton Live and AV performance – has found himself supporting artists such as Baauer onstage. With the release of his debut audiovisual album, Legacy, we wanted to find out more about how the limitations of his stylish studio helped him craft the “most important piece of art” he’s ever created.

Tell us a bit about the studio, Levitate.

I’m in a little neighbourhood in LA that’s a bit east of Hollywood. I moved here around two months ago from Seattle. My roommate Andy, AKA Aftermyfall, and I moved out here for some little opportunities that presented themselves a few months prior and have been settling in and getting to work since. My studio is in this compact two-bedroom house in one of the main rooms, and Andy has another studio in here as well. Both have fully treated vocal booths. The idea when we moved out here is to find a small, efficient music base where we can keep our heads down and really just grind for a year, then revisit the idea of expanding. That said, this place has been so cosy and comfortable I have loved working here. 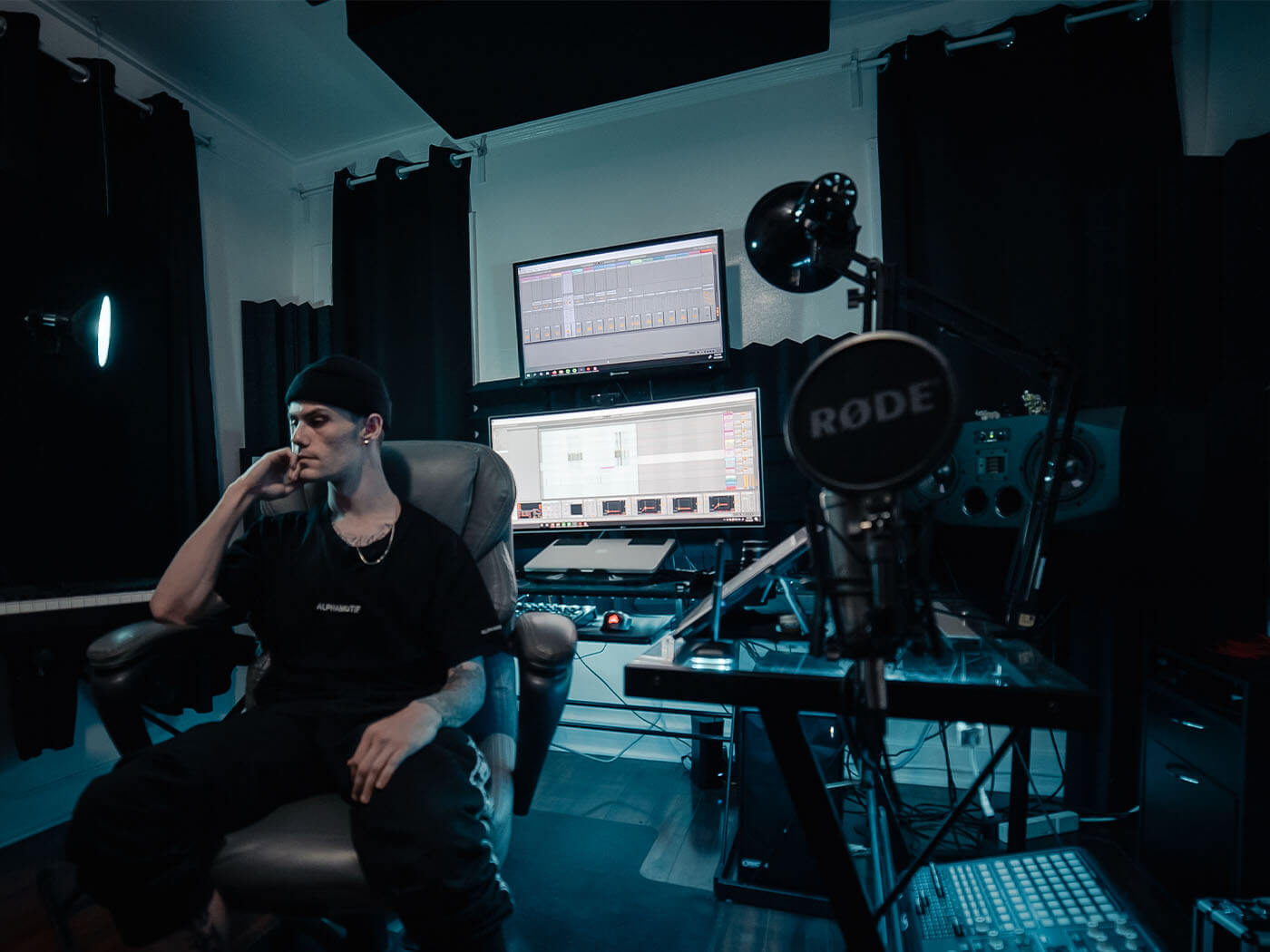 I do everything here. I have been a DIY type of guy for as long as I can remember, especially from around late 2016 when I decided to make Levitate an audiovisual project. Although we rent this place, I decided to dive in and get professional treatment here for engineering. In total, I do songwriting, production, tracking, mixing, mastering and all of the visuals for everything in here. In some cases, for visuals, I go onsite to film but ultimately editing will go down in here. We have tracked a lot of guitar stuff here, and a ton of vocals in our booths, but we haven’t done any drum tracking in here yet. I can see that coming in the near future. 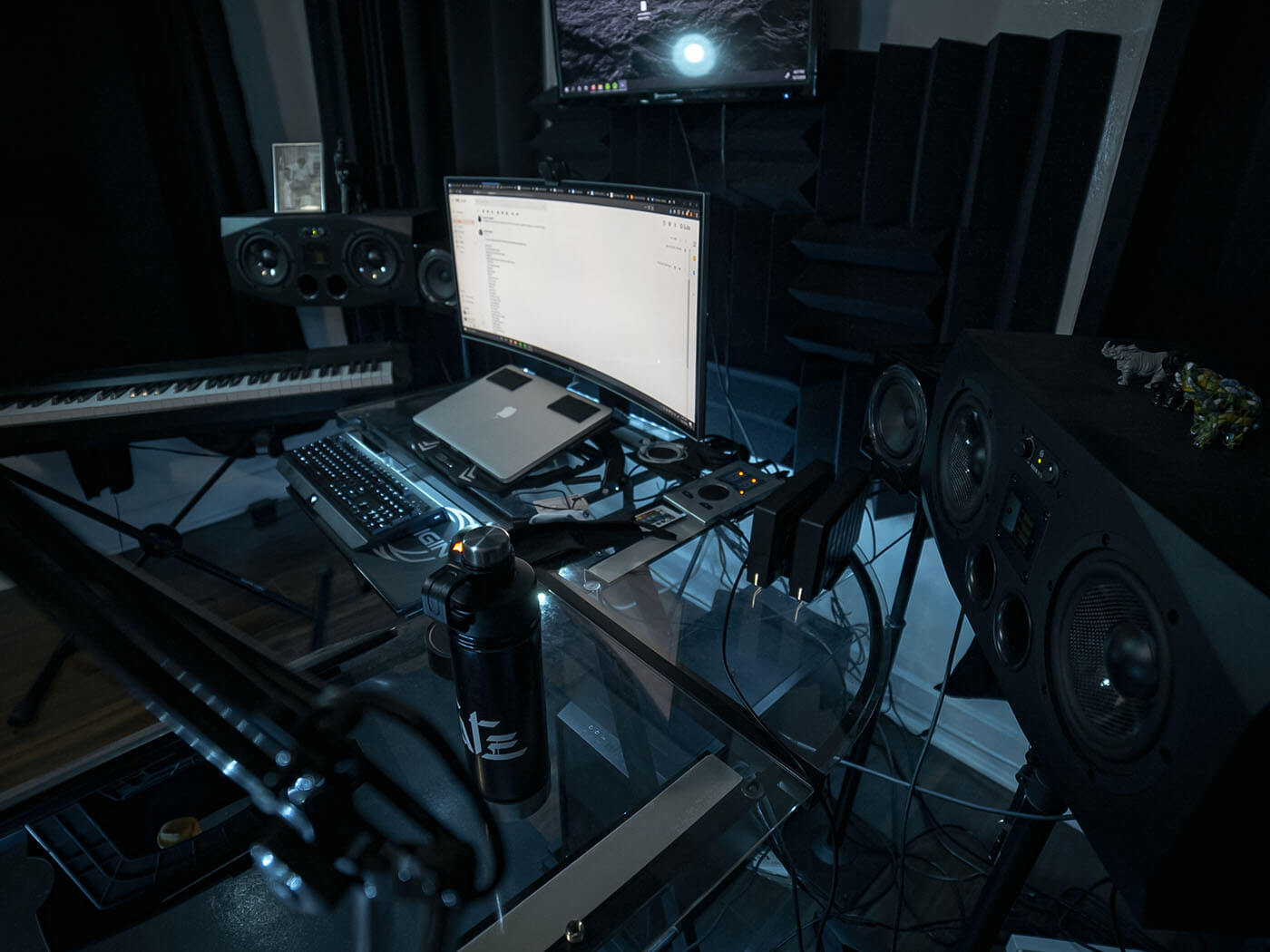 Ableton Live, mainly for my personal convenience. It’s just what I learned first. I have used, or at least played around on, the gamut of well-known DAWs and I personally like how Ableton is equally applicable to engineering as it is to production as it is to live performance. This makes it a one-stop-shop for me.

Something that is important to me is the feeling of purpose. I keep things looking minimal and intentional, because subconsciously I want to wake up, come in here and feel like I am going to tackle everything head-on and do it intelligently, whilst still feeling aesthetically pleasing and not like an office. I’m out of space for any art on the walls because of treatment, but I keep coloured lights on teal while I work because that colour feels modern to me. That being said, the treatment itself looks like art to me. I would almost prefer big flat black panels to paintings, but that’s just because I like that kind of utilitarian simplicity. 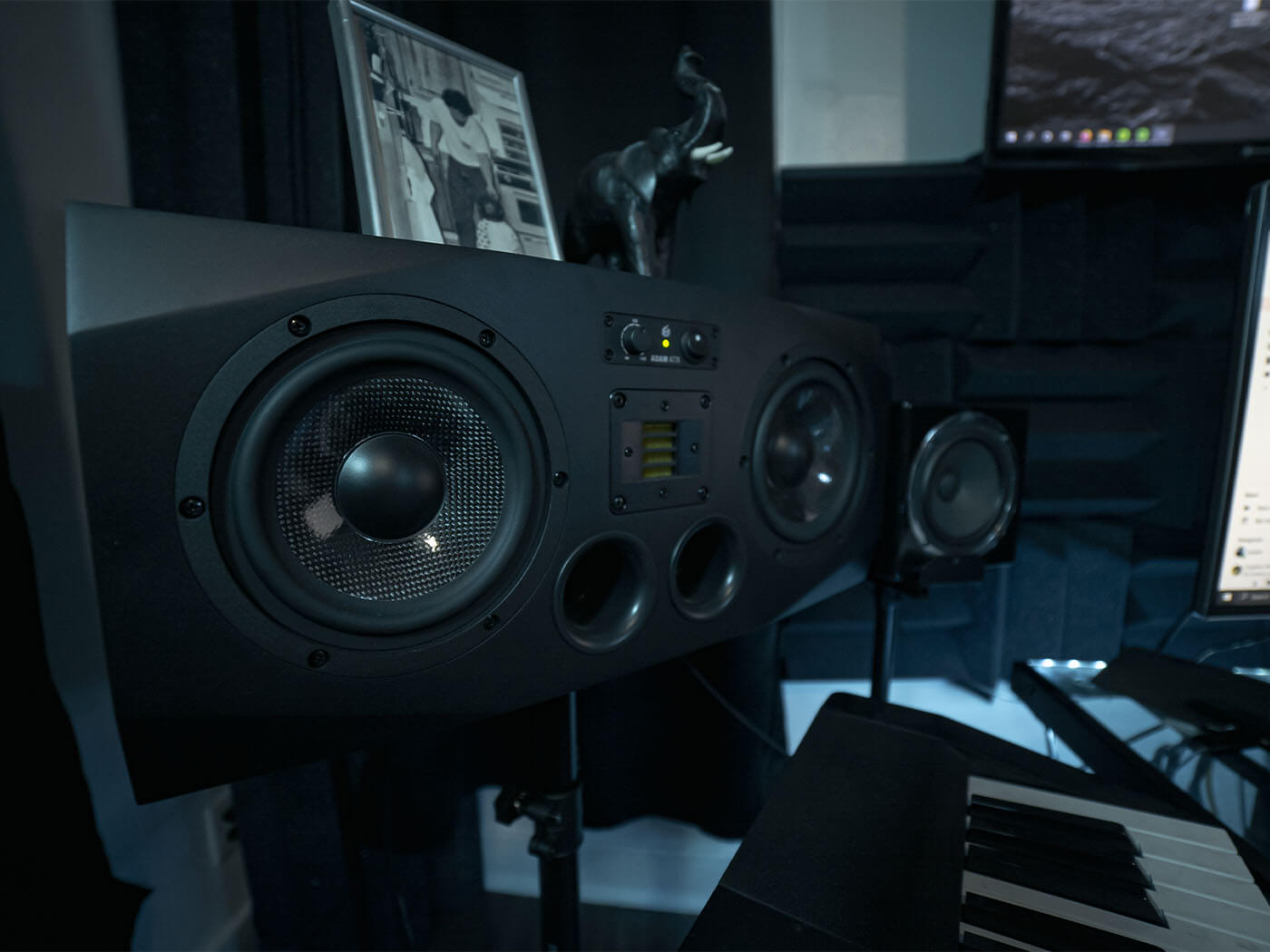 Definitely the Adams A77xs. When I bought these monitors, I felt like I had gotten new ears. I had worked with Yamaha HS-8s for the longest time, which have a solid and flat response, but the lack of dynamic compression and fidelity on the Adams is infinitely more important to me while engineering as well as producing. 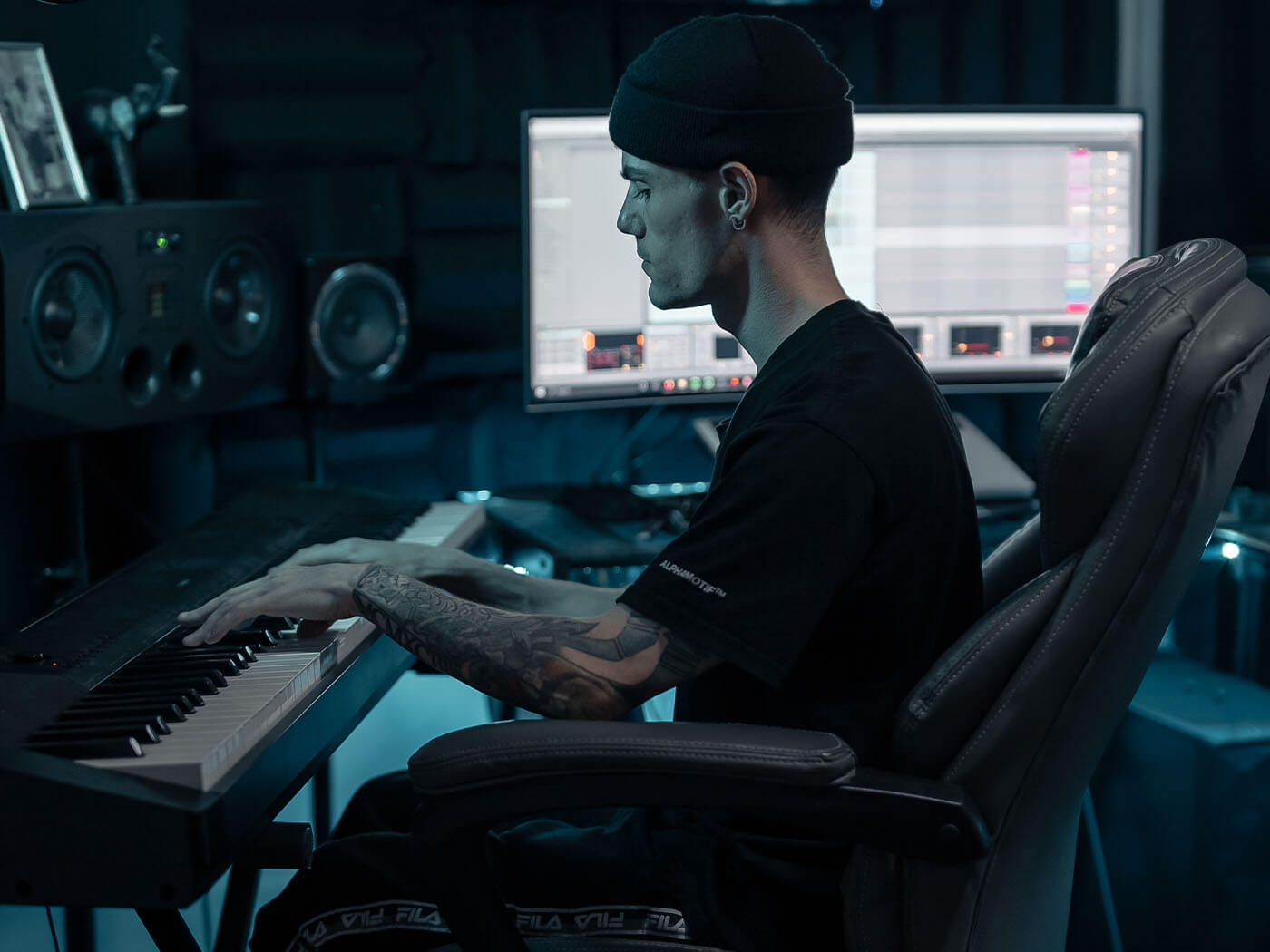 Definitely the weighted keyboard. Having a DAW would be great, but the thing is, if you can play melodies and hear them in real-time, you can write infinite amounts of music. That would probably keep me occupied forever.

What synth or effect can be heard the most on your new release, Legacy?

I use Ableton Live’s Operator quite a lot, but much more common than that would be iZotope Nectar 2 on my voice. There are plenty of vocal effects and formant shifters out there, but there is something about the way that pitch module sounds, that is so digital and retro-futuristic if you want it to be. 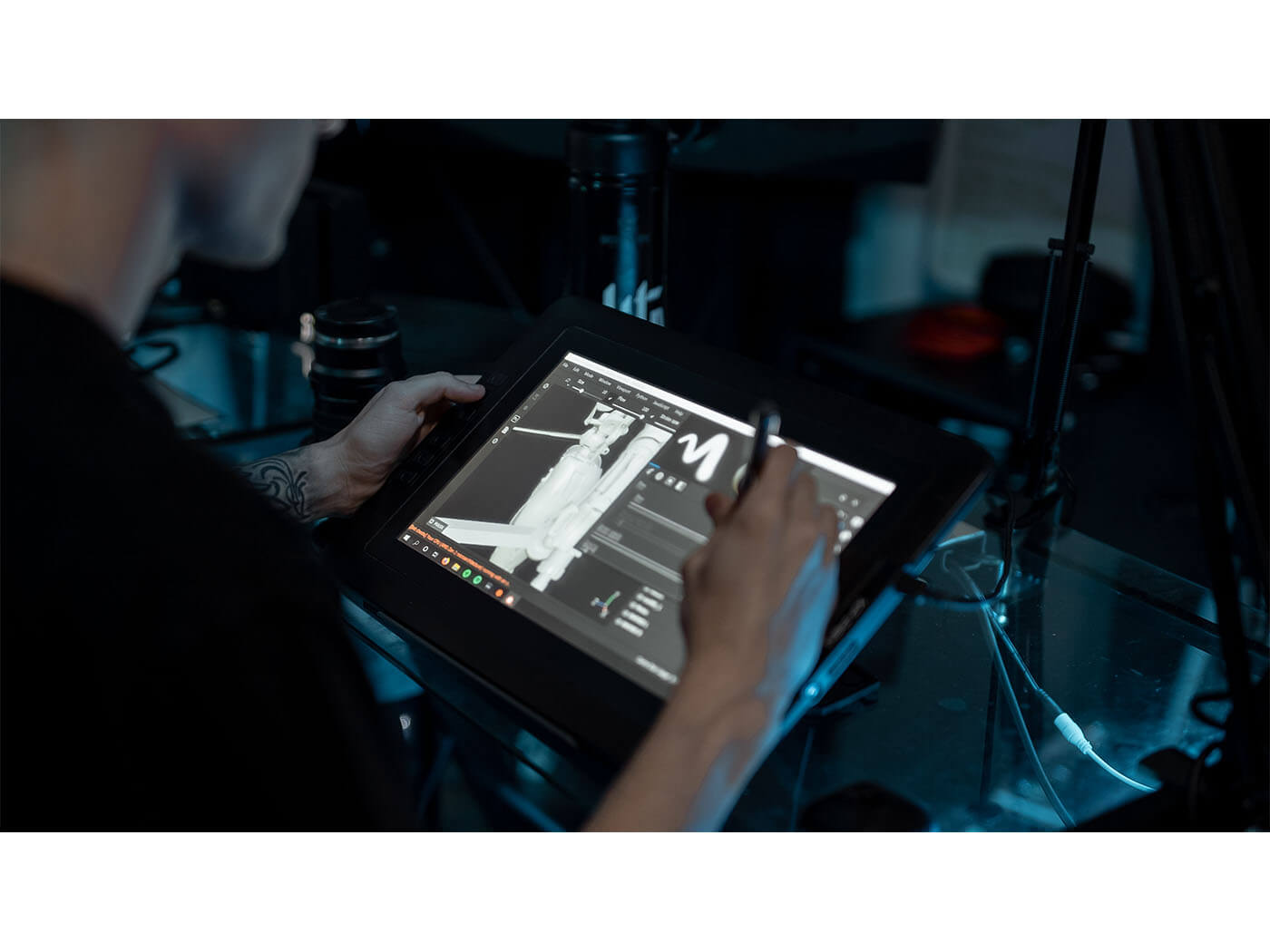 My computer for sure, mainly because I need a lot of graphics and processing power under the hood to do the visuals I do, which can get extremely costly. It was definitely worth it because, without that, this entire album project would likely not have been possible. As far as gear specifically for audio, I think the Adam monitors would be the most expensive things in here. They were also crucial to getting my more recent work to the point it’s at.

I hired John Hunter Acoustics out here in California. John and his team were very professional and respectful. He also commonly worked with square spaces and knew the sweet spots to tackle the first reflections. 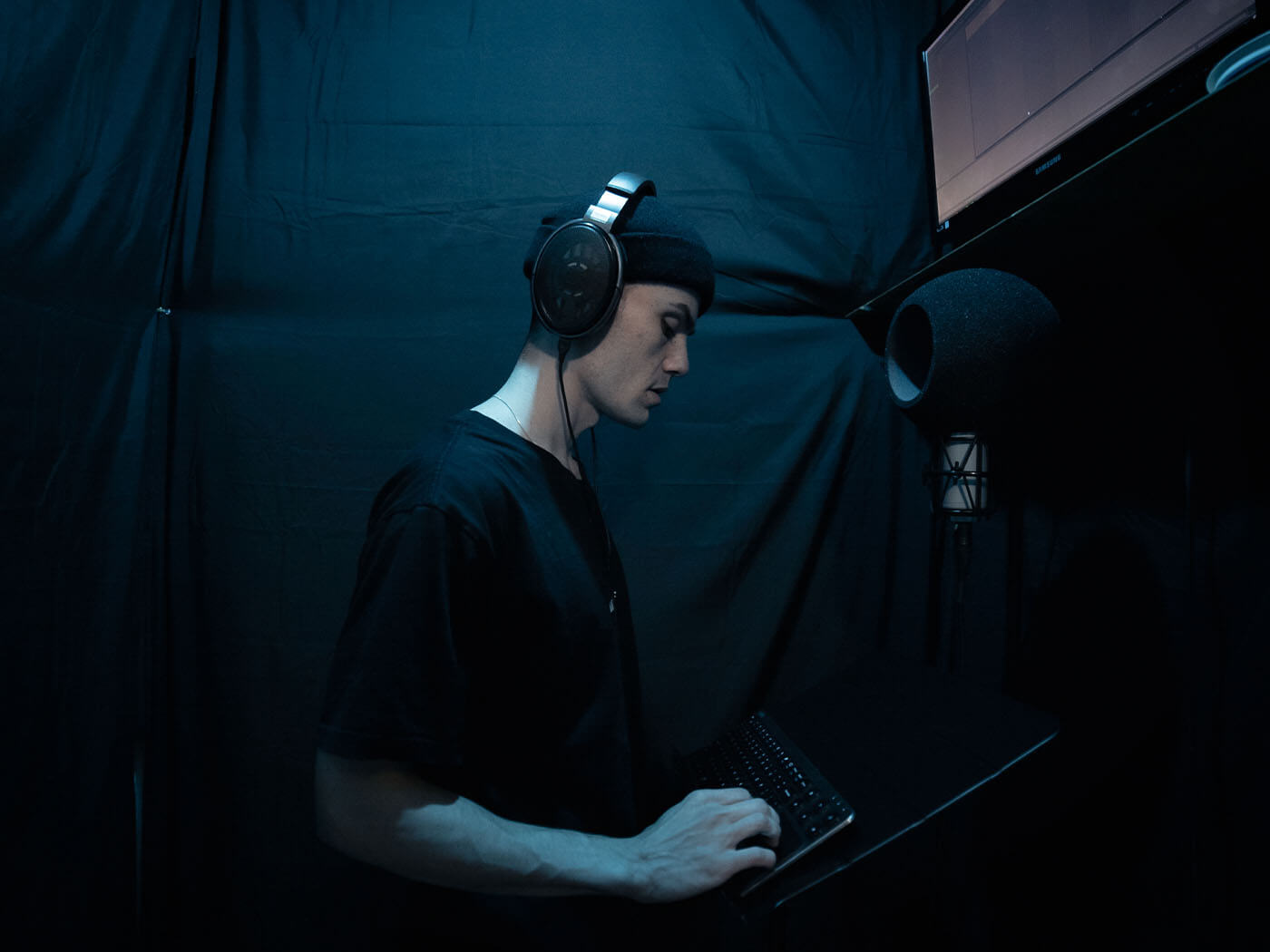 The RME ADI-2 Pro FS. I love the D/A converters RME makes, and from what I have read, that box is perfectly transparent mastering quality. The conversion on the Babyface is definitely hifi enough to get a more than solid master out of, but if I knew that I was getting a perfectly uncoloured conversion, that would be the end of my mastering needs.

Probably a modern SSL console and an Antelope rack or something like that. Anything where I can get more analogue summing than I would need with a fully transparent DAC for like 65 channels and a bit of room for out-of-the-box TLC. 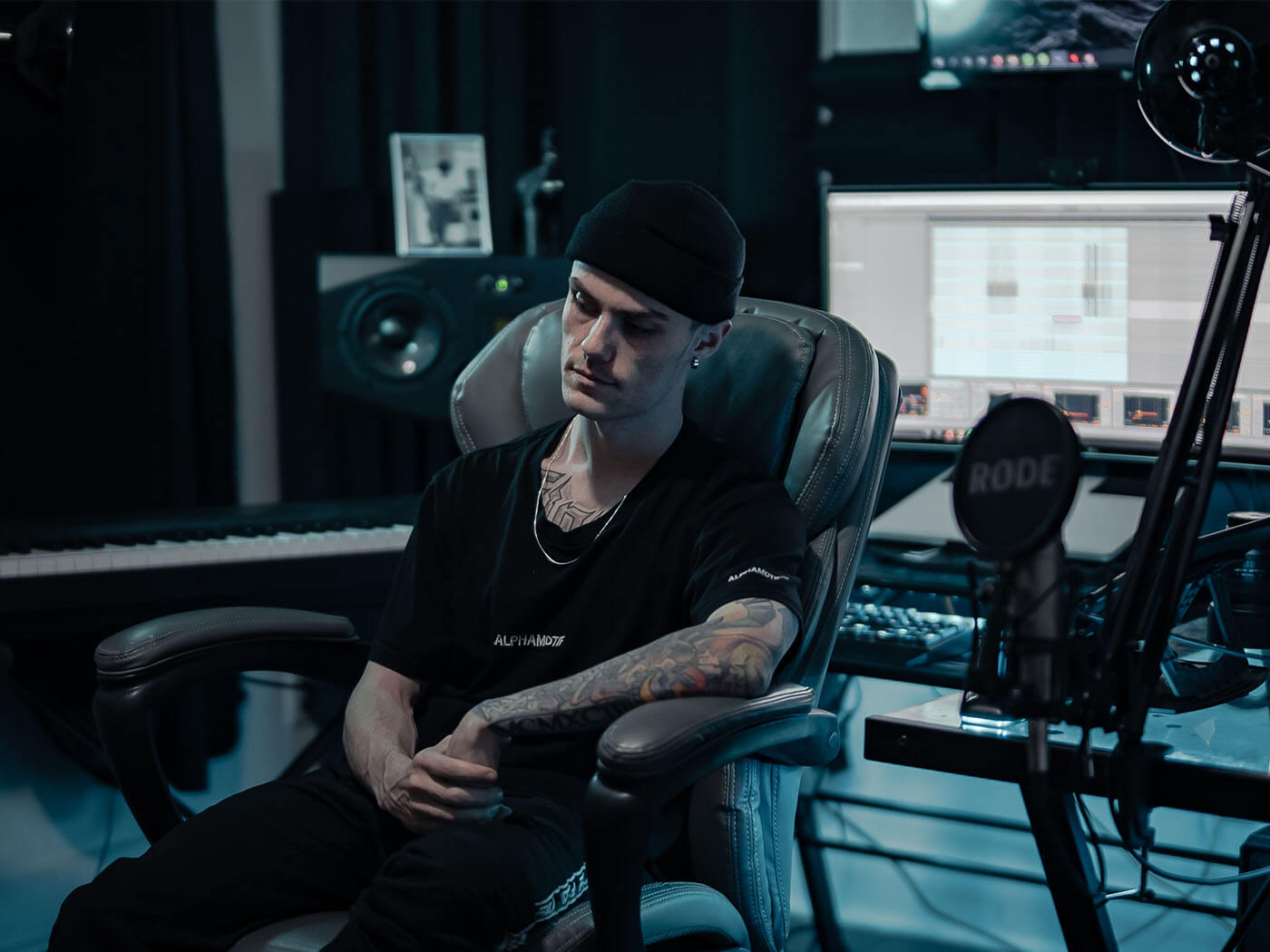 Nothing in particular outside of visual work. Although with the visual stuff, I’m always getting pissed off at my graphics card [laughs]. The only thing I can think of is effectively treating the mid-low resonance in the vocal booth. I have full treatment in there, but it seems almost inescapable to get rid of this strange resonance in the lower frequencies of my voice that always happens in small spaces.

Always do the most with what you have. Subjectively, I think that’s the key to being a good artist in the first place. Inevitably, there will be limitations to creativity at some point but for whatever reason reaching that limitation simultaneously seems to always present a way to move past it and level up. For instance, if all someone has is a pair of Apple earbuds and a starter version of a DAW, by the time they reach a point where they need to level up, the work they did to get to that point will allow them to do so. Maybe they wrote a hit, maybe they sold some beats. Whatever the case, if you’re always pushing your own edge, you will always continue to grow. 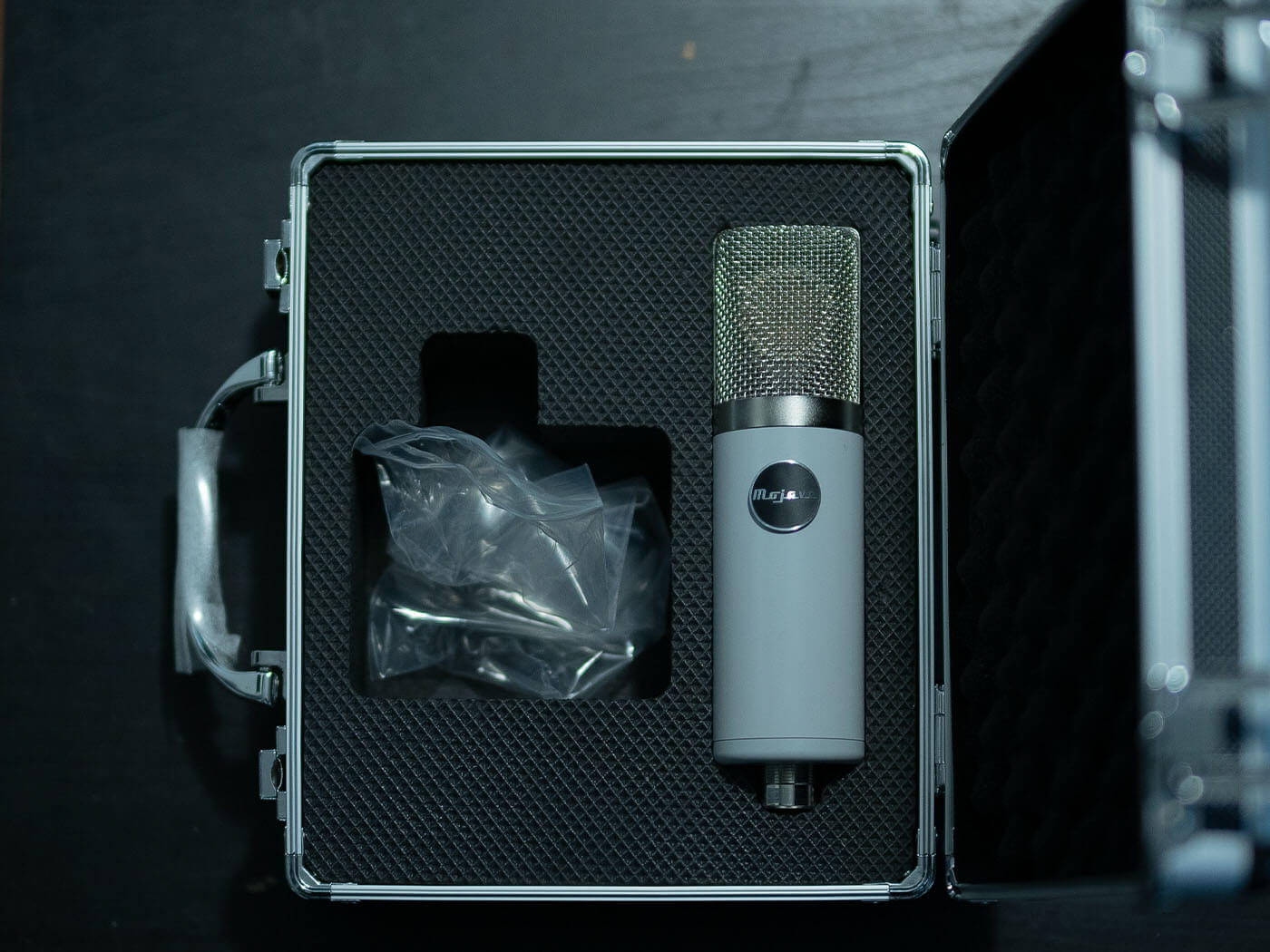 Be mindful of the materials the room itself is made from. If three out of four of your walls has glass windows and your floor is smooth concrete, that will be crazily difficult to treat and stop things like flutter echoes. Look for spaces made of wood and softer composites, then treat them. The key for most people is staying within budget, so if you are starting with a room that is a bit tamer, then working up from there, you can save a lot of money and time on the way to getting an accurate response out of your gear into your ears. 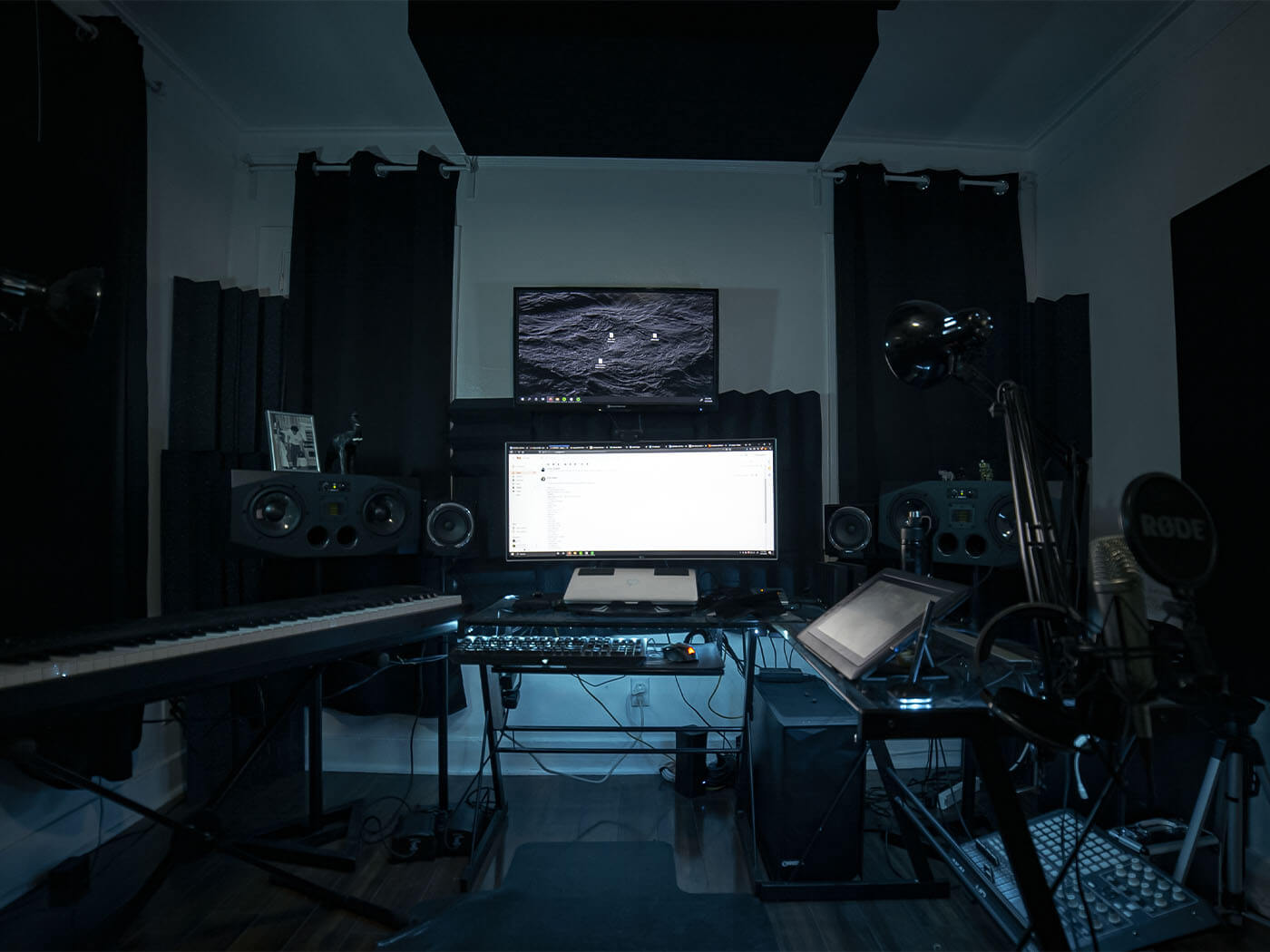