Show Off Your Studio: Macks Faulkron keeps it funky at REX Studios

This week we head down the road to Islington, London, to check out REX Studios, where we find some quirky gear and nuggets of wisdom from Macks Faulkron. 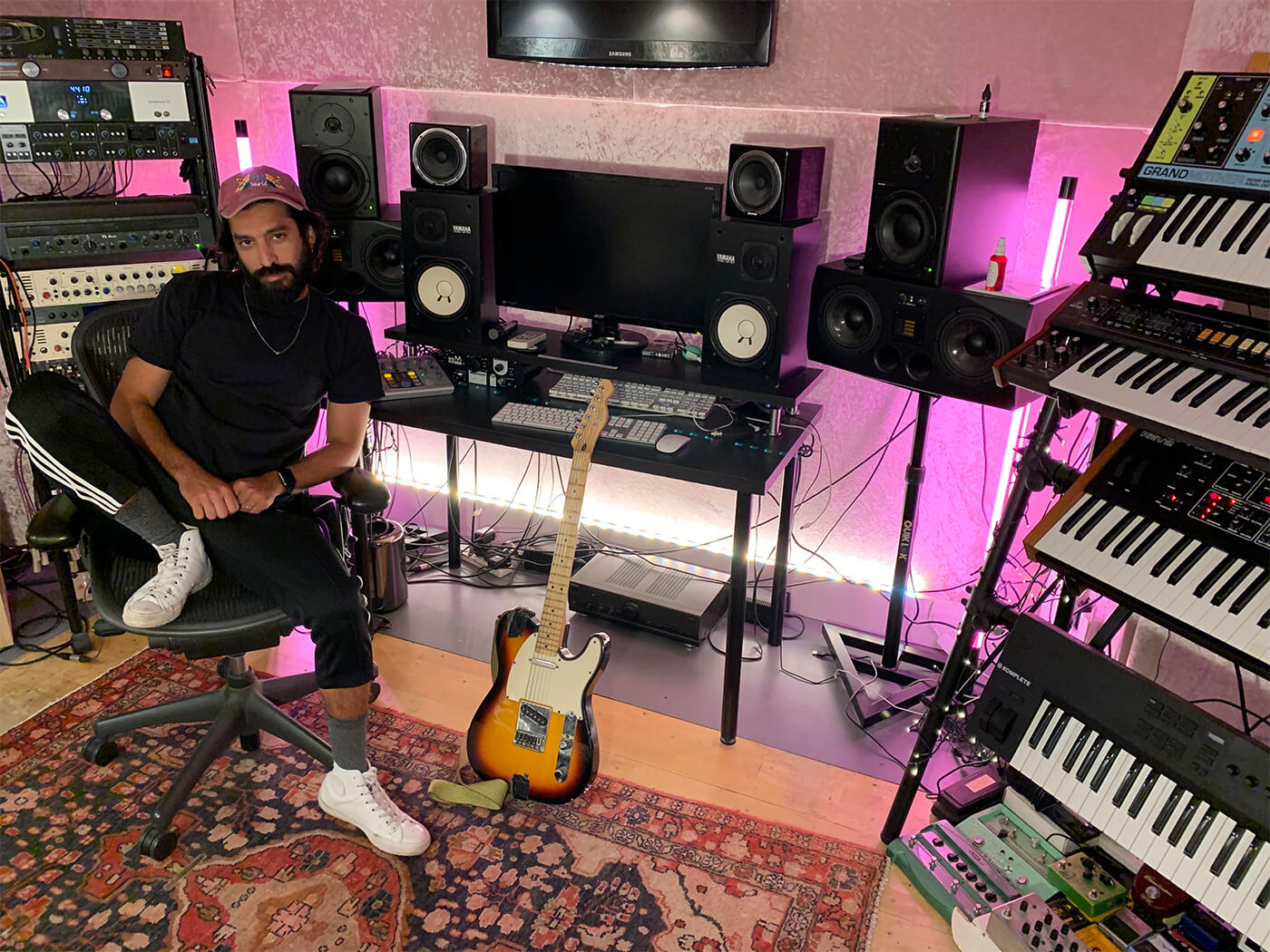 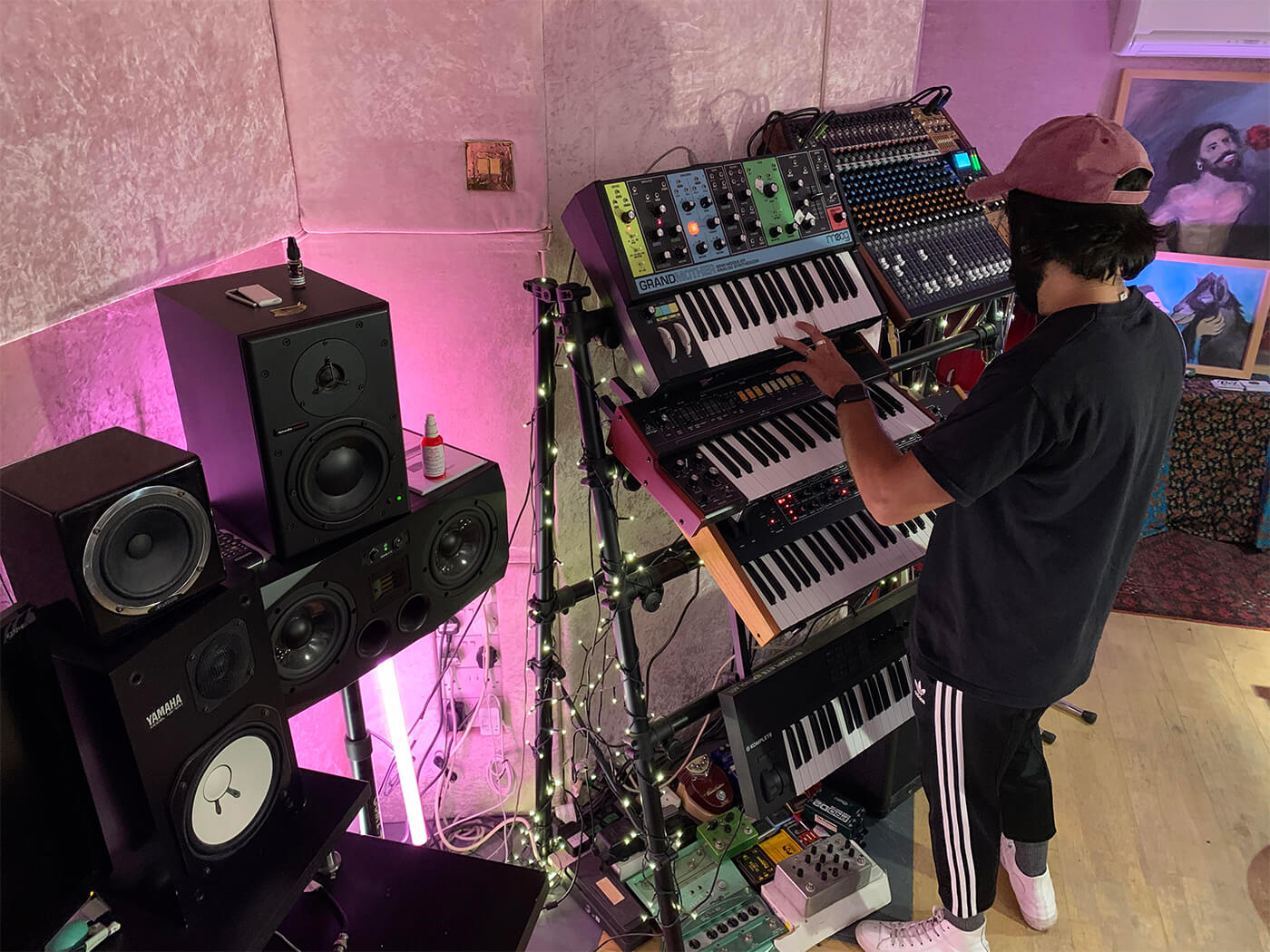 Hey Macks, how do you use REX Studios?

Hi dudes! I work as a producer and engineer at REX. I’m a multi-instrumentalist, so I do a lot of live recording with bands, but equally lots of in-the-box stuff.
I’m also an artist manager. Currently my roster includes PREGOBLIN, who are signed to eOne Music, and CC Honeymoon, a brand new artist in development.

Tell us more about the studio, Macks!

REX is located in Highbury and Islington, right off the high street, and just a few stops from Central London. The location is mad good for a city studio!
I’ve been here for 11 years now. It all started when I left one of my bands on Mute Records in my early twenties and decided to get a space to make music for myself primarily. The more I was doing stuff, the more people were asking me to work with them, and before you know it, two years later I’d moved from the small production studio in the block to the main studio, and I’m still here. I’ve gone a bit grey, put on some weight, lost some hair, and I blame REX for it all. 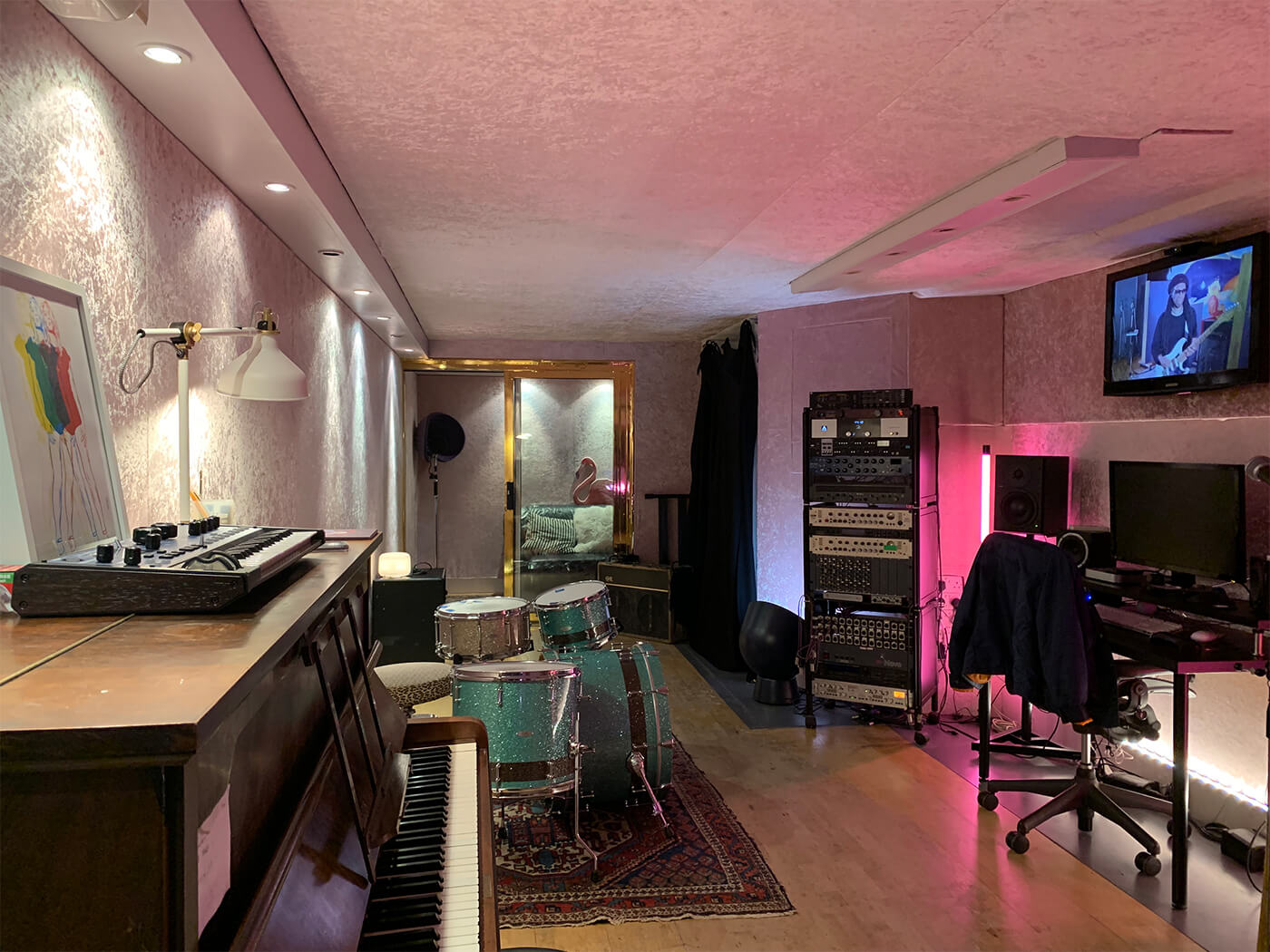 Due to the fact that there’s so much writing going on in the studio, I mainly use Logic Pro X. It’s the best DAW I’ve come across for writing quickly and getting ideas down on the fly. I use a lot of MIDI as well, so to be able to pull a workable sound so quickly during a session and then send it through the analogue synths is just a great process for me, allowing each track to be full of character and ‘out of the box’.

Starting a studio and keeping it going is no easy task. It’s a labour of love, and a lot of people don’t understand why you do it, [laughs].
I guess the first big plunge I took was buying the Apogee Symphony I/O. Upgrading to that from a Saffire was just a touch difference in price, but my god was it worth it! The Tubetech MEC1A is amazing too, and equally, if not more, bank-breaking.

The self-portrait from my degree show when I studied Fine Art at Central Saint Martins. Can’t replicate that thing, mate!

Clients have likened it to being inside of the womb, and my first point of reference during the rebirth of the studio was totally actual rebirth – name something more atmospheric than that! Mood can be adjusted with some Hue lighting, and the pink neons reflect off the walls subtly, which makes for a relaxing and creative environment. If you still require more chill pills, there’s a range of relaxation oils to whack in the diffuser.
When I did the refurb in 2017, I had the atmosphere and mood in mind for sure. For the first seven or eight years, I’d been working with dark blue, very 90s fabric studio walls, which did not inspire much. 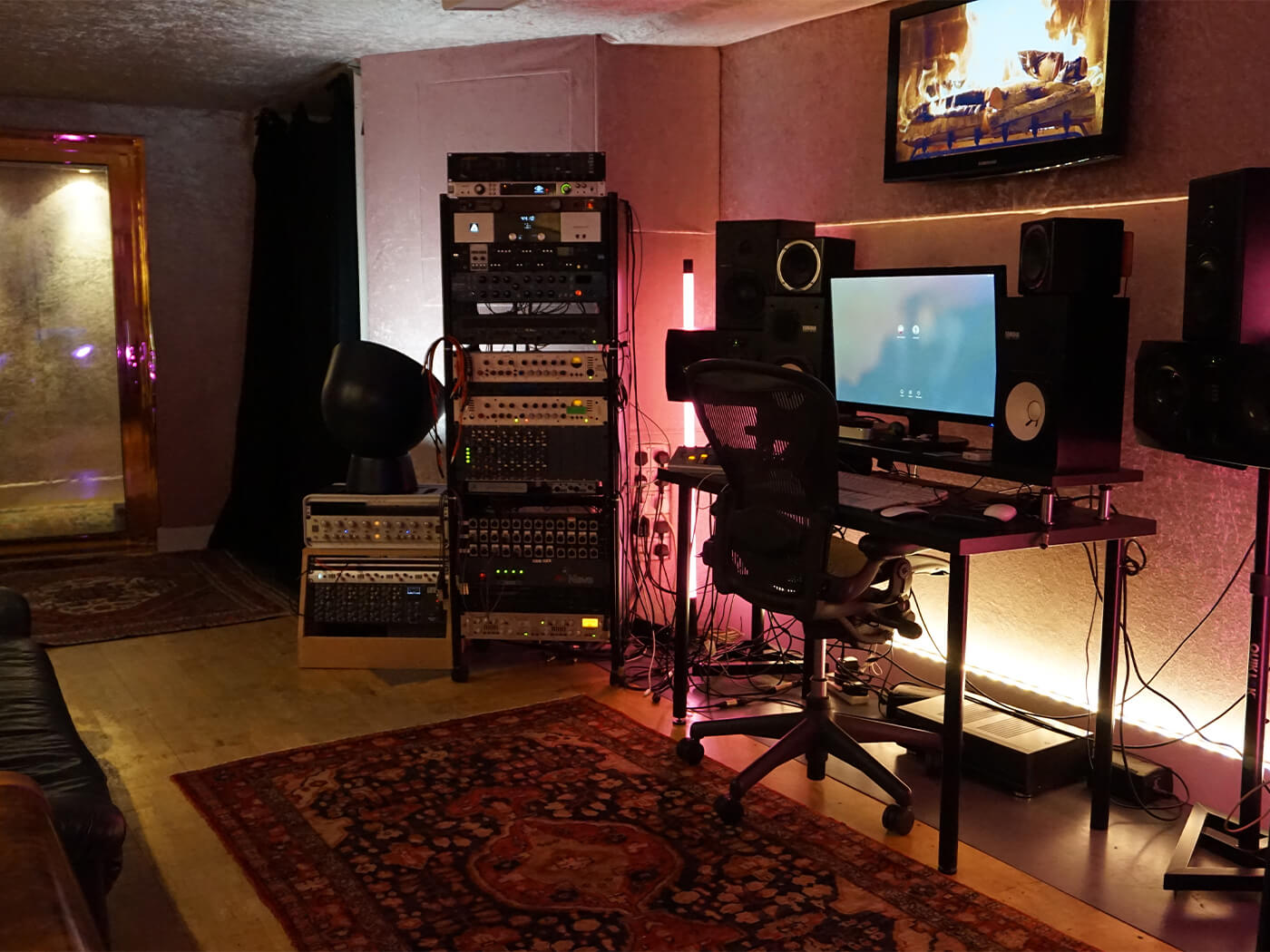 Simplicity. I have a lot of writing sessions taking place here, so keeping it simple is key.
I have a patch bay in my main rack which connects everything and is labelled up to make it easy to use for anyone who happens to be in on the day. The synth rack goes through a Tascam Model 24 which is connected as an aggregate device to the Mac, so sending MIDI and audio is also super quick and simple. Having these things be super straightforward tends to lead to more creativity by avoiding everyone getting bogged down with technical issues.

Luckily, the acoustic design of the studio was already mostly set up when I moved in. It sounds great! It’s dead space for the large part, which for me is perfect. Behind the fancy fabric, there are acoustic panels on the walls and ceiling, and the booth is slightly raised from the control room too. It’s worked out well. 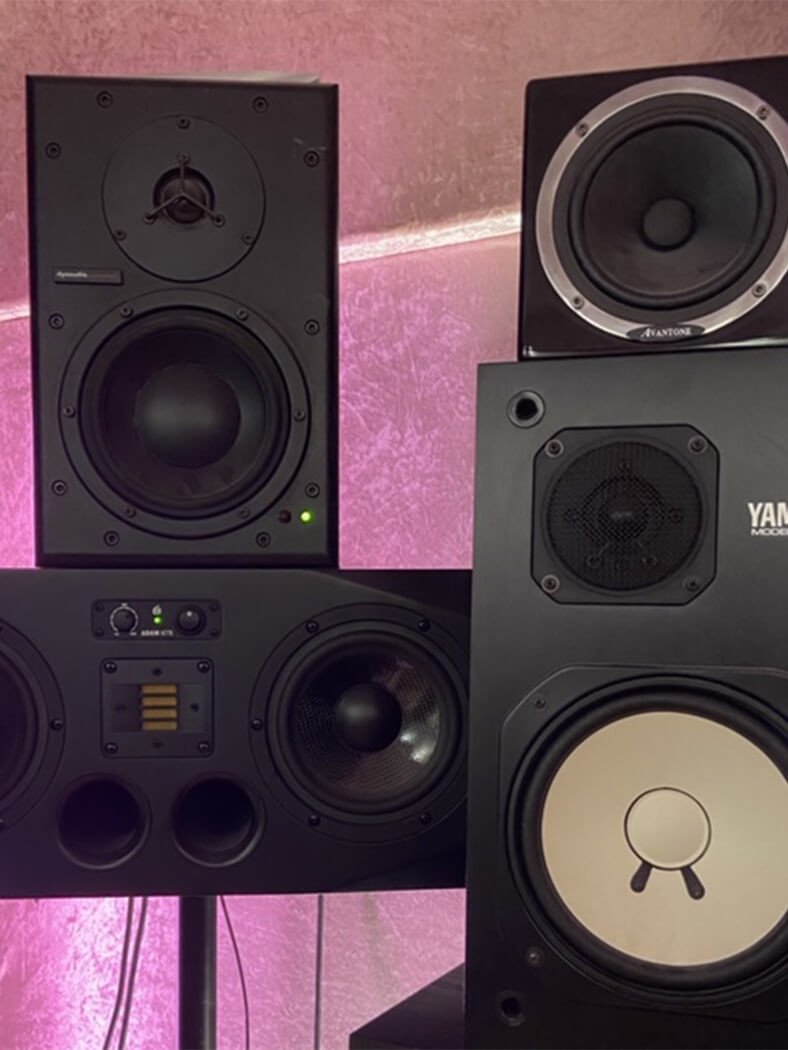 Can you tell us a bit about the monitor setup you have going on here?

I’ve used the Dynaudio BM6A’s since I started professionally, and have just always loved them and learned to get on with them really well. I think you need to work with a set of speakers for so long that you just know what they sound like on other devices, and that comes by just doing it. In addition to those, I’ve always been torn between NS10’s or Avontone mix cubes for the flat-sounding referencing. Oh, and then there’s also a set of Adam Audio A77x in the studio as well, which are my pal Adam’s (really). He’s an excellent mix engineer who uses the studio too. A77x are cool because they are twin-woofers, which gives a little further comparison for referencing and a bit more ‘oomph’.

What about that rugged-looking VOX amp?

That’s my friend Oli’s dad’s. It’s an original VOX AC30 from 1962. It weighs a ton, and the valves are always blowing up but that’s how you get that tone. But it’s a real pain in the butt to get serviced. 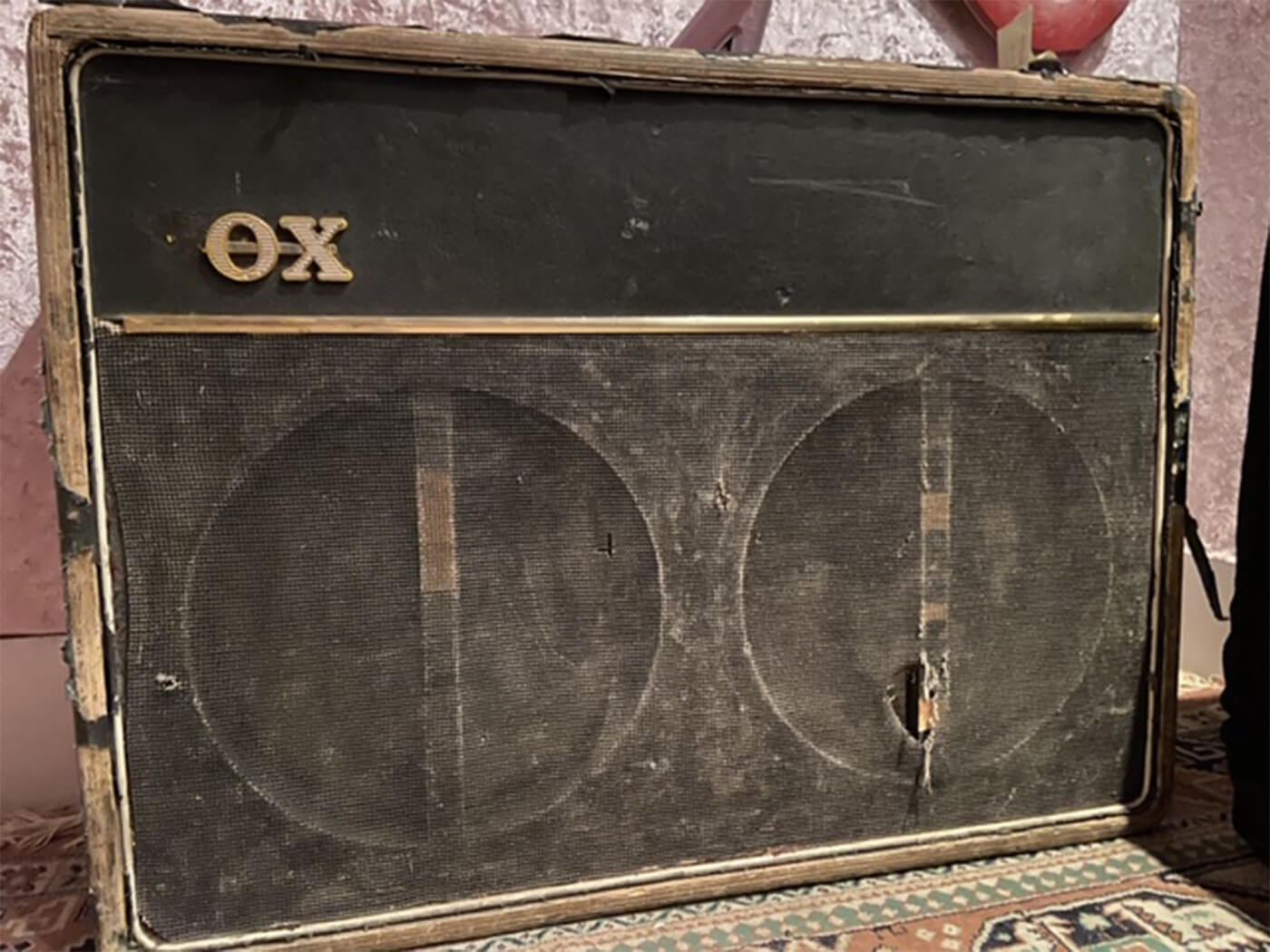 It sounds amazing, and the built-in tremolo you just can’t recreate. It really is a wonderful, wonderful amp. Re-amping anything from guitars, keys, vocals with it just adds so much character and true valve joy. Just be careful that it doesn’t give you an electric shock.

It can change daily or per project. I love the Tubetech – it’s a brilliant mic pre and compressor. I love my mics. The REV2 is indispensable to so many recordings. I love the Moog, and the AC30, and the Fender Bassman 59, and then we haven’t even got on to my guitars, or the C&C custom drum kit, or the Pearl Custom Series my pal Matt Tong who used to be in Bloc Party gave me. You know what, I don’t think I can answer this question.

There’s a Shadow Hills Equinox in the mic cupboard that still needs rigging up, so I’m covered for now. It’s too easy to keep tricking yourself into thinking you need more stuff. But if you were to twist my arm, I must admit I’d like an AKG 414 ULS. I used to have one in the studio, and I threw it on absolutely everything. I’ve been thinking of that mic more and more recently, and I think that would have to be next. Used to love it as a mono drum overhead—it was perfect. Same for vocals, cabs, you name it. It’s a winner for me.

I think the answer to that question is me. I guess I wish I was more tech-savvy so I could make even more out of what I have. The possibilities are endless, and I learn something new every day because there’s so much power in the equipment we already own.

I’m always jealous of those super nerdy producers with all the flamboyant setups – the modular synth folks. That stuff is unreal. 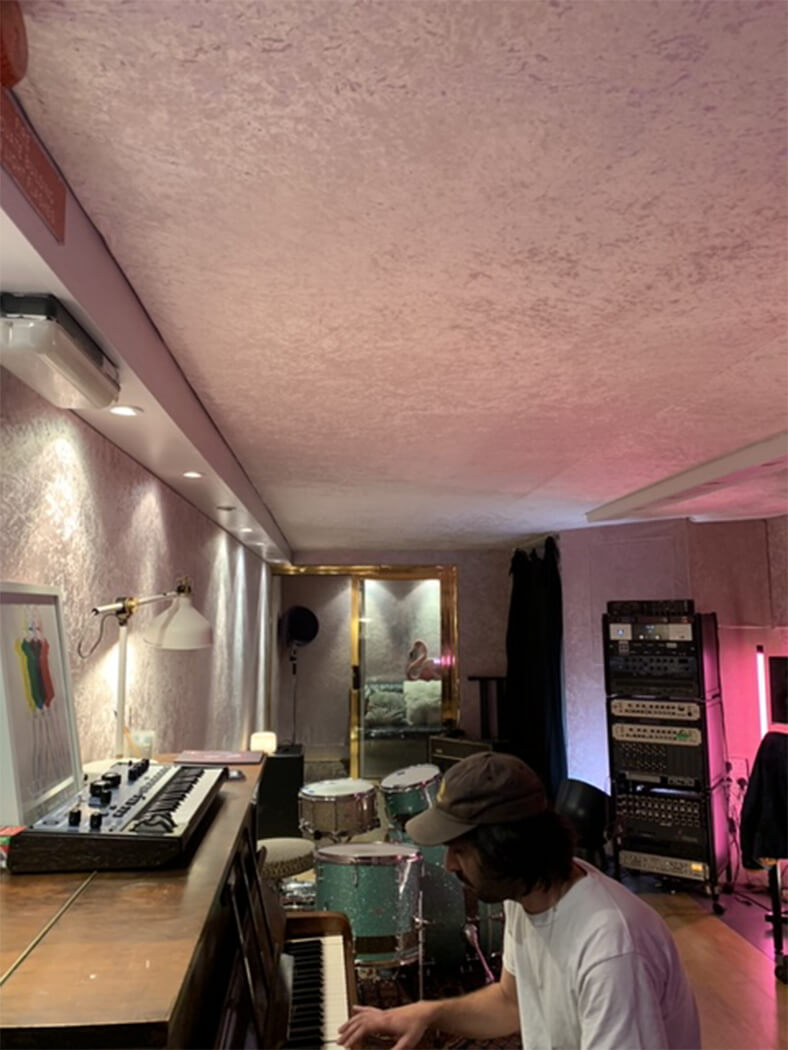 Hmm… Gibson Custom ’64 ES-335 Reissue w/59 Dot Neck, please.
The guitar is where I started around 23 years ago, and I’m fortunate to have a couple of really nice Fenders and a Taylor acoustic in the studio, but I’d love one of these super classic Gibsons with the semi-hollow bodies. I’ve played the 80’s Epiphone before and it was perfect. I can only imagine this would be a guitar for LIFE!!

Keep at it, stay motivated, learn every day and ask lots of questions. Keep working daily, even if it’s just on sketches you’ll never use. You learn so much by making mistakes and being productive. Listen to mixes you like, A/B them with yours on your DAW, keep going until you get close, and realise what it was in that mix that worked for you.
Write it down and move on to your next quest – and there’s always a next quest because you’re never done learning.

Just the other day I watched an interview with Bob Power where he said that only in the last decade has he really got to grips with certain bits of mixing. This is someone in his late 60’s who’s been prolific since the 80s. What does that tell you about this job?

If it’s for a home studio, less is more. Learn what you’ve got and learn it well. I started on tape and reel-to-reel personally, so I had to be able to play all the stuff in. That’s how I became a multi-instrumentalist, so I’m thankful for that, but now you have all the software and midi that can sound pretty decent, so I’d say just choose carefully, get some choice bits and have fun with it. I’d also say learn your DAW really well. Get comfortable so you’re not limited by your own knowledge in your sessions. They say knowledge is power, and my god they are right. Get smart and get creative. 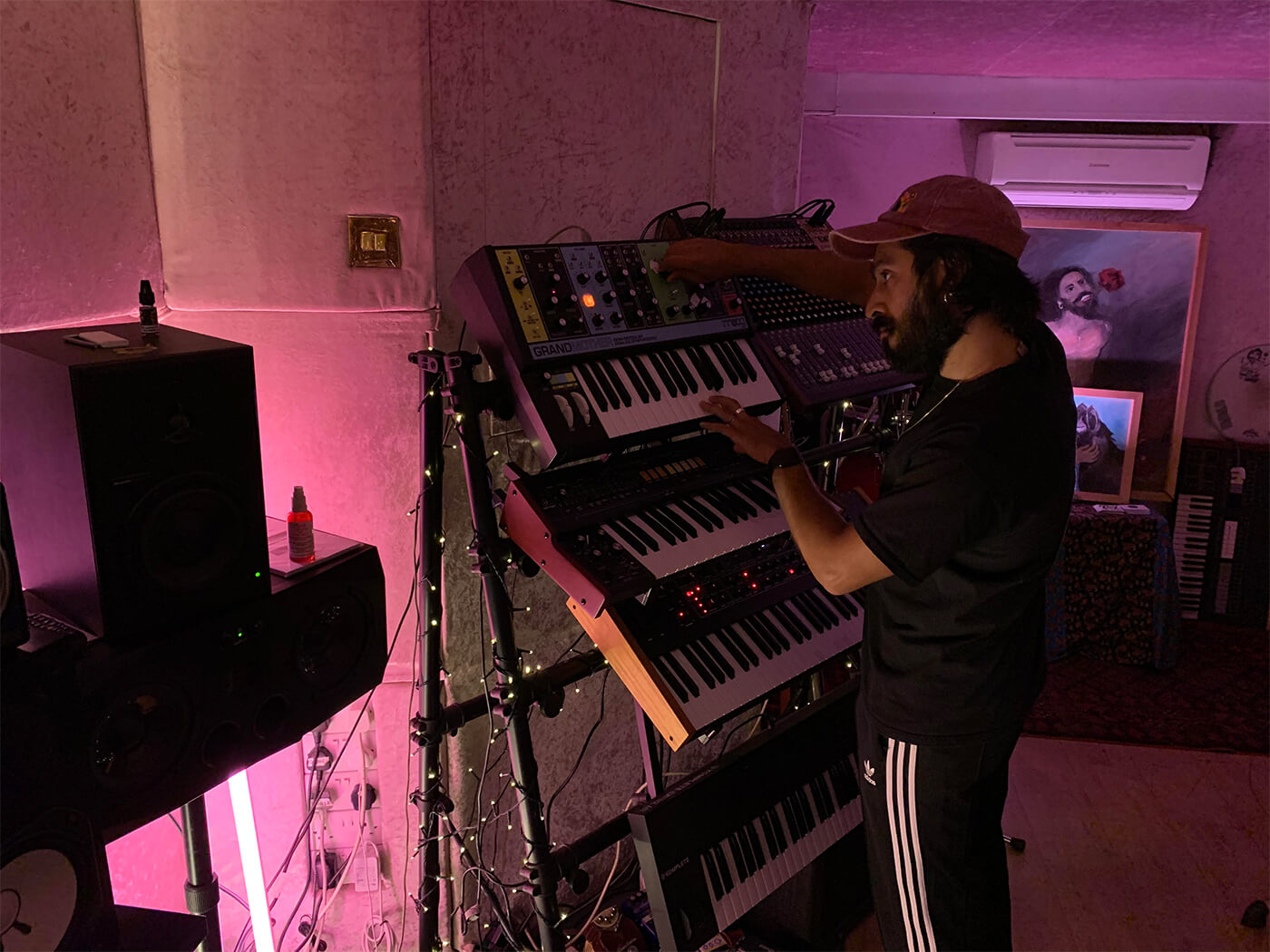