Besides a limited run of U67s back in 1992, Neumann has never done vintage reissues. However, the U47 FET is supposedly vintage-correct in every way. So is it as good as ever? Huw Price welcomes back an old friend… Details Price  £2928 Contact Sennheiser UK 01628 402200 Web www.neumann.com There was a gap of four […] 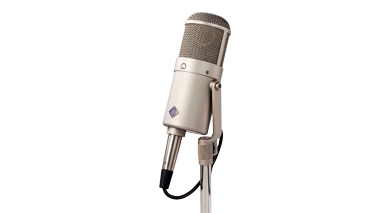 Besides a limited run of U67s back in 1992, Neumann has never done vintage reissues. However, the U47 FET is supposedly vintage-correct in every way. So is it as good as ever? Huw Price welcomes back an old friend…

There was a gap of four years between the discontinuation of the valve U47 and the introduction of U47 FET in 1969. The model designation has always caused some consternation because the two microphones had virtually nothing in common.

The U47 FET was outfitted with a newly designed fixed hypercardioid gold/mylar capsule called the K47. This fed into a field effect transistor (FET) preamp circuit and it no longer needed a separate power supply. Phantom power was fine.

Versions of the Story
The body shape was similar – like a compact version of the short body valve U47. It also had a bass roll-off switch (200 Hz) and two pad switches. Neumann also dispensed with a suspension mount, opting instead for a bracket with an integrated cable clip.

For this reissue, the old specs and new specs are identical – right down to the rats nest of point-to-point wiring that makes up the preamp. There were various versions of the U47 FET but Neumann’s reissue combines the physical circuit layout of version No 2 from 1972, with the circuitry and physical features of version No 6. 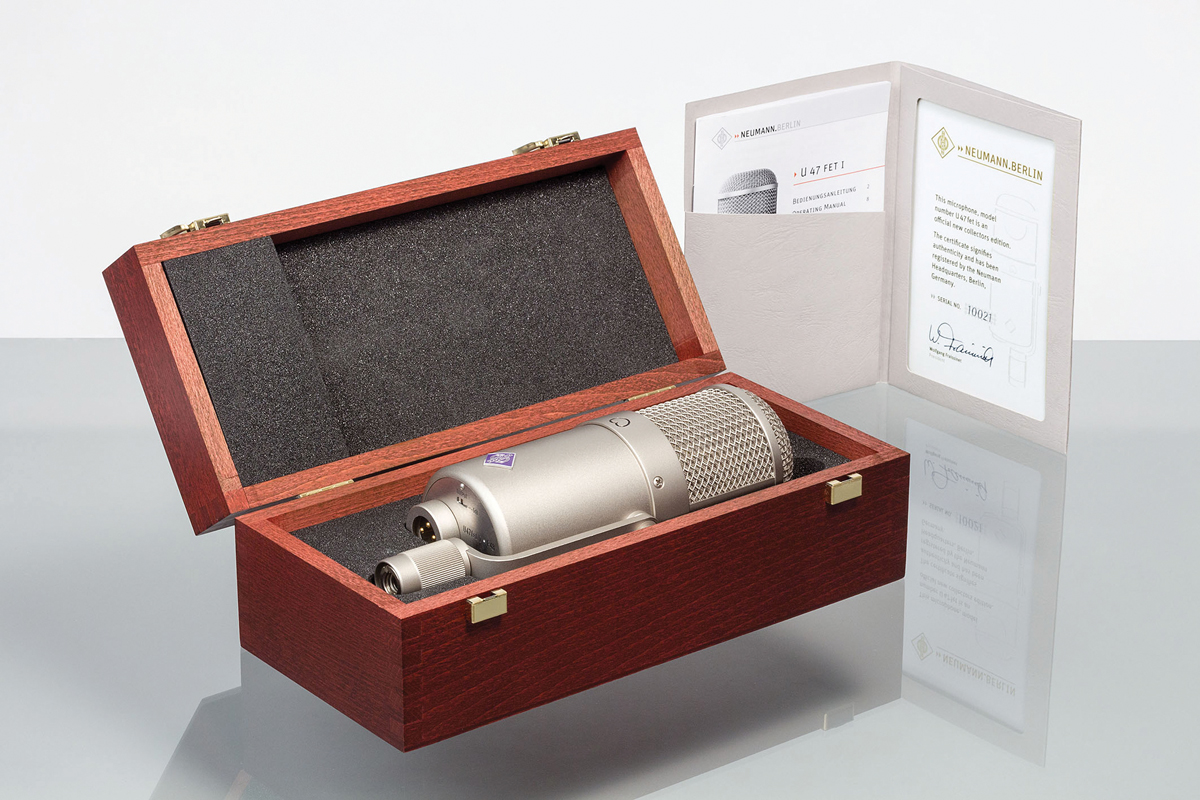 Sounds Familiar
The U47 FET is not the subtlest or most nuanced microphone Neumann has ever produced, yet it does have that sense of enhanced realism that typifies so many of the company’s products. The midrange is fat and up front without sounding woolly or too dominant, and the strong upper midrange and low treble allow the U47 FET to cut through without being edgy or take up too much frequency space.

Many see Audio Technica’s fixed cardioid AT4047 as an alternative to the U47 FET, largely due to its transformer coupled FET preamp and attenuation and HPF switches. To be fair, Audio Technica never marketed it as such, but then again putting ‘47’ in the model designation invites comparison, and we were pleased to have one on hand.

There is some passing resemblance but it’s easy to tell them apart. The Neumann is noticeably clearer in the midrange while the AT4047 has a softer and cloudier quality. But the real difference has to be the transient response: the U47 FET wins because it has real punch and dynamics.

One area where this became obvious was acoustic guitar. Using the Neumann, individual notes in a chord were easy to distinguish, with a clear front end to each and every one. In contrast the notes seemed to blur into one another with the AT4047. The AT4047 is still a very fine quality microphone, but the U47 FET is in a slightly different league.

Vocal tests also proved revealing. The U47 FET’s sound has a very present and up front quality. The mic adds body without adding boom and we sensed a slight softening of the ‘esses’ that will help with sibilant singers. Off axis the sound is fairly consistent, which helps with talent that can’t keep still.

The U47 FET became the go to microphone for electric bass, kick drums and double bass and, for many of us, it still is. Often put up as an afterthought, U47 FETs would frequently win vocal shoot outs, and they could be relied upon for electric and acoustic guitars, brass instruments and voiceover applications too.

It’s not a supremely detailed or airy microphone and its reputation is somewhat overshadowed by its valve namesake, but the U47 FET is an audio classic in its own right. Freelance engineers would always expect to find at least one in any professional studio. Although we didn’t have an original on hand to compare, the reissue sounded exactly how I remembered it.

Alternatively
Many U47 FET fans have been impressed by the Lawson FET47 ($995) and the Bock Audio iFet (£1614). The iFET has two operating modes: ‘I’ for U47 FET style sound and high SPL handling, and ‘V’ with a simplified single FET signal path based on the KM84, for greater sensitivity and a warmer tone.

Alternatively, the Audio Technica AT4047 (£538) will do a similar job for about a sixth of the price. Of course you could track down an original, but that might require some maintenance work and could easily end up costing you more than the reissue. 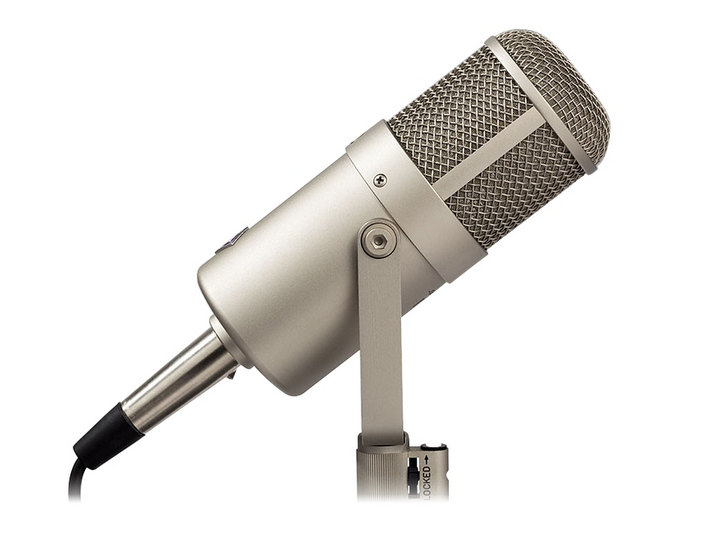 Culture Shocks
Many companies find their current offerings overshadowed by products they discontinued decades ago. Openly acknowledged in the guitar and synthesizer worlds, and by some iconic pro audio brands, product lines often reflect this. However some microphone manufacturers, Neumann included, have resolutely asserted that their current mics are technically superior to their classic models so there is no necessity to resurrect the obsolete.

This thinking is deeply ingrained in the Neumann company. In a 1989 interview, Neumann’s sales manager Dirk Rowehl told Mix Magazine: “we could not make Mr Neumann go into tube microphones again; he wanted to be in the technical forefront.”

Of course the technical metrics for audio quality, such as low distortion and ruler flat frequency response, apply to recording microphones, but only up to a point. Whether it’s soul, funk, pop, rock or folk, recordists use their ears to select mics, and character trumps clinical more often than not. Ultimately it’s about musicality not measurement.

This applies to microphone preamps, compressors and equalisers too. Demand drives the market and it’s no wonder that so much current equipment is based on decades old components, and prices for classic microphones remain buoyant.

Practical Tip
Most condenser microphones with attenuation padding only have the one switch – sometimes with two or more settings. The U47 FET has two attenuation switches that operate on different areas of the microphone.

The 10dB pad is an amplifier feedback switch that prevents overload in the preamp and transformer.  A second switch next to the output connector offers an extra 6dB of attenuation to prevent excessive output levels from overloading microphone preamps.

Past, Present and Future
Neumann’s reluctance to provide vintage-correct reissues has forced customers to splash significant sums on vintage Neumann mics or investigate other options. In addition to the competition it has always faced from its own (vintage) products, the company must now go head-to-head with manufacturers who are happy to cash in on Neumann’s audio heritage.

The U47 FET is no half-baked reissue. Neumann has done a proper job and the results are superb. Although it’s not a technical leap forward, it may signify a softening of its stance.

‘Collectors Edition’ implies that the U47 FET reissue is destined for a limited production run, but it’s now a permanent fixture. We hope this microphone enjoys the success it clearly deserves. And if Neumann’s cutting edge and legacy products can coexist, wouldn’t it be fantastic to see some authentic KM84 and U87 reissues, too? When asked, Neumann responded with a noncommittal, “we’ll see”. Meanwhile, we can only hope… 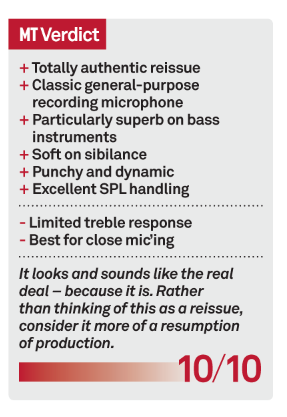