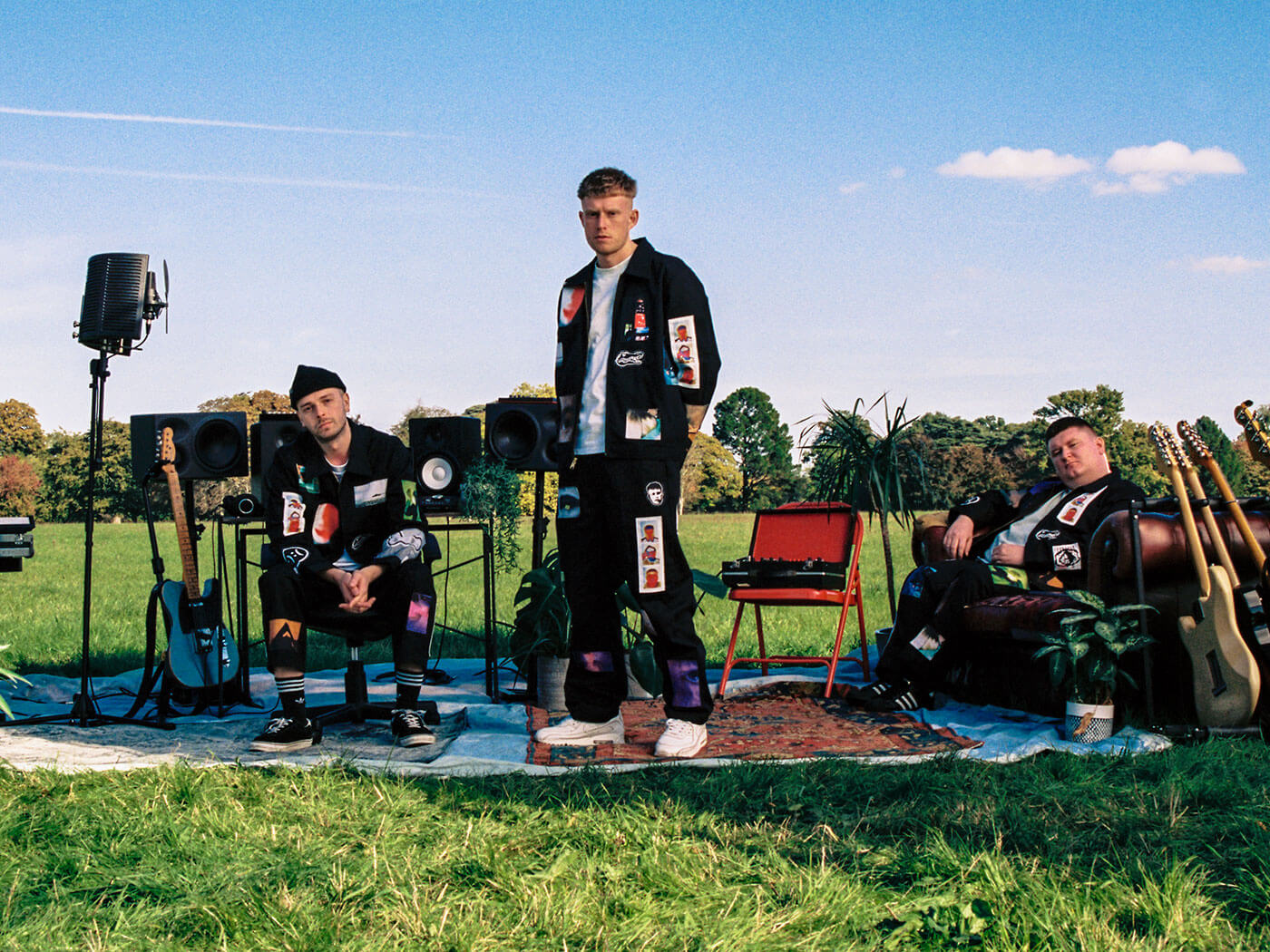 With a DIY approach to production and composition, the UK act is constantly experimenting with styles and sounds – here’s how they do it.

It’s not unusual for NOISY to cause a ruckus when they rock up. The British three-piece recruited a reptilian mascot for their 2022 single Alligator – a high-octane breakbeat track that epitomises the UK sound – and have brought their energetic attitude to a jam-packed touring schedule across huge stages in Europe and the UK. With NOISY’s new track, Rudeboy, the band (comprising singer Cody, guitarist Connor and producer Spencer) merge influences from Justice, Chemical Brothers and Basement Jaxx to create a gnarly synth-heavy anthem that is primed for partying to.

We catch up with them for the first time since 2020 to learn about how they channel such sonic influences into their music and what their DIY approach to production really entails. Spencer also tells us about the relief the trio feels after retrieving a van full of lost gear, and why their live shows revolve around two space stations.

MusicTech: Hey NOISY, congrats on the release of Rudeboy and Alligator. These two tracks are a lot more synth-driven than your previous releases – what inspired you to move in this direction?

Spencer: Thank you! We were searching around for some inspiration when we took a writing trip to Braintree, Essex, and got back into listening to a lot of Justice, Chemical Brothers and The Prodigy. We thought it’d be cool to lean into that kind of tone for a couple of tracks, which is pretty synth-heavy with a lot of electronic presence.

What specifically did you take from Justice and Chemical Brothers’ productions to incorporate into your own?

From Justice, it’s gotta be the hard-hitting compressed bass and drum sound that really gets inside you with the contrast to some of the obscure kid and choir-style vocal samples. There’s a real rawness and attitude to some of the Chemical Brothers stuff which is something we’ve always felt attached to and wanted to push that further with the distorted radio vocals and dance grooves.

Since we last spoke, you’ve been remixed by the likes of High Contrast and Bklava. What’s it like hearing your tracks transformed into new genres, and how does it inspire new music?

It’s amazing. Getting to hear your tracks reworked and interpreted by these guys is so cool. Plus, having some of your favourite artists remix your track is a surreal thing in itself. I’d love to see a behind-the-scenes of them working on it and seeing their process. 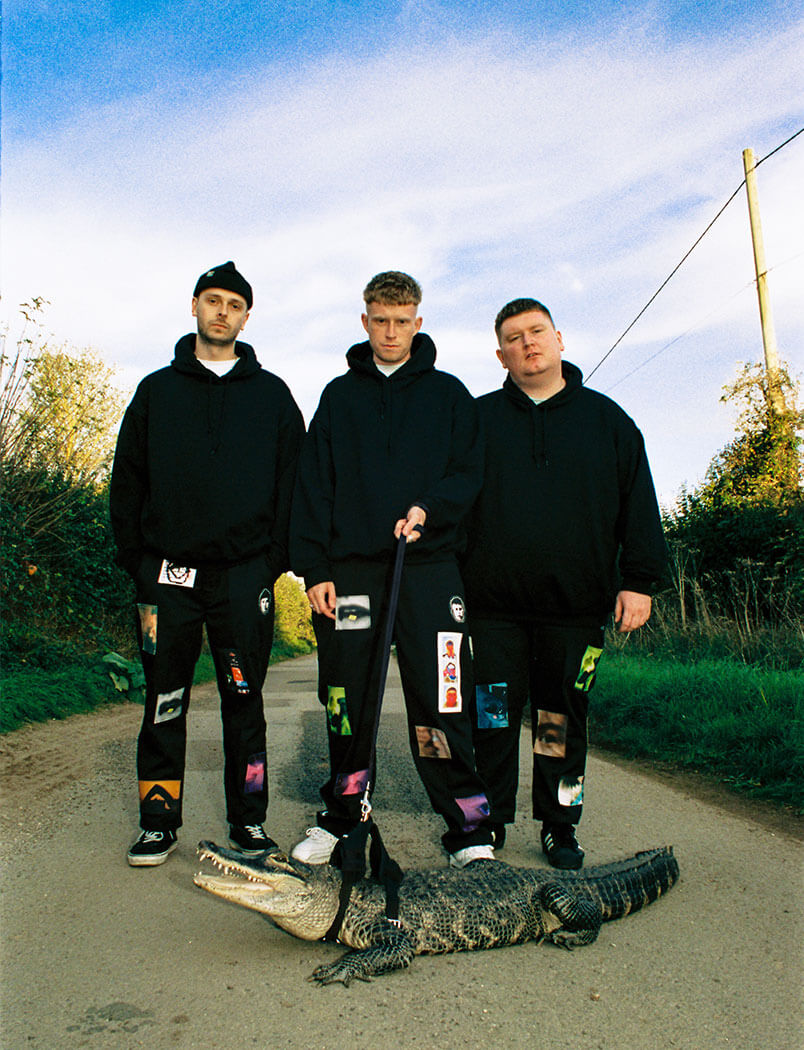 In our last chat, you were all working at a hospital and listening to voice memos of demos you’d made that day. How are things different now?

Fortunately, we don’t have to dance from ward to ward sneaking off to hear demo snippets but we are still as encapsulated in the process as always. For the past couple of years, we just haven’t left our little studio apart from touring. It’s both amazing and draining but, when it works, the reward is as great as ever. From the beginning stages of sussing out the idea, seeing if it has some magic in it to find the vibe that gets us buzzing, sending it into our group chat, playing it a million times and coming back to refine and perfect it for however long it takes.

Your music revolves around a DIY approach, right? How does an idea form between the three of you?

The approach can change from song to song. Sometimes I’ll start an idea with a beat or a sample, chord progression or synth patch and grow it from there seeing how melodies and song topics fit around the initial idea which can then completely change by the time we get the vocal in or vice versa. It’s about adapting and making the puzzle fit.

We have billions of ideas and beats for starting points so sometimes we’ll just work on one of those or a track that we’re like there’s something in this but it’s just not right yet we then may spend a lot of time on it and craft it into to something we think is exciting and gives us that feeling.

How do you all know when a track is finished?

That’s the ultimate question; sometimes you never do know. There are tracks we have that are five or six years old that we are still tweaking now, and we thought they were a done deal back then but we’re still thinking of ways it can be improved. Maybe that’s a bit of OCD tendencies coming through but who doesn’t want that perfection [laughs]?

A lot of people say to stop overthinking it and move on but what if you didn’t give it that extra bit of attention and lost the thing that could have just taken it to the next level? That said, sometimes the track can just feel complete and you don’t need to complicate it – it really does vary from song to song.

Where are you recording music now and how does that space keep you creative?

We’re still at the home studio in Worthing. It’s a very comfortable setup, there’s no pressure and it’s a free environment. We keep creative by working on as much music as we can while also doing all other aspects of the band like making artwork, making videos and content, figuring out aesthetics and branding and planning the future.

This past year, we’ve been doing a lot more writing and production sessions for other artists which is a nice switch-up from solely writing for the band. Sometimes the two sides work great and we end up with some amazing collaborations and features. All of this keeps us inspired and wanting to keep moving forward.

What are some of your key bits of gear that you gravitated toward for Rudeboy?

There wasn’t anything particularly leaned into gear-wise, except for some in-the-box stuff like Splice’s Astra plugin. There are some amazing patches on there so a lot of that is on this one.

A slightly different addition for Rudeboy was the live drums. We recorded our live drummer Benny and blended his take into the samples, which gives a really nice groove and dynamic to the track.

Speaking of which – you had an eye-watering amount of gear get stolen a couple of years ago. How much of it did you claim back and are you still using it now?

It really was an eye-watering period…But we got every single piece of gear back so we are beyond relieved to have it home in our arms. The story of the retrieval will definitely become a movie when we get the chance [laughs]. We’re still using it all now for live and studio.

How are you creating these gritty basslines in Rudeboy and Alligator?

We use a lot of patches on Astra, as well as Output’s Substance and, recently, a lot of pitched-down live guitars. We’re also finding the Faturator by KiloHertz really useful for adding crazy fuzz width to bass. I’m liking the FabFilter Pro-MB a lot when mixing the bass – just controlling the low-end dynamic to smooth it out and keeping it consistent!

You’ve got a lot of electronic sounds and breakbeats in your music – how do you translate these to stage?

For live shows, we have what we call our two ‘Space Stations’ for Connor and myself, which consist of an Alesis MIDI keyboard and Native Instruments Maschine run through Apple MacBooks.

A Live drum kit with kick and snare triggers run through SPD also containing drum samples. Cymatic for track playback and click. Tc Helicon for lead vocal effects and two guitars and for one song a bass guitar. We find layering some of the breaks/electronic drums with our live drummers kit to be really powerful and exciting. We always want to make the live set sound like a push even further than the recording so it’s about finding the balance between synths, samples and live instruments.

Are you intending to follow up Alligator and Rudeboy with a bigger release?

Yeah, we’re planning on releasing as much music as possible this year in the aim of landing at the album era. We’ve also got a really cool project happening simultaneously with the regular releases.

What else does 2023 have in store for NOISY?