Show Off Your Studio: NOISY saturate sounds in their seaside studio

We visit the trio’s workshop in West Sussex to see how it helped create their gritty EP, I Wish I Was A… 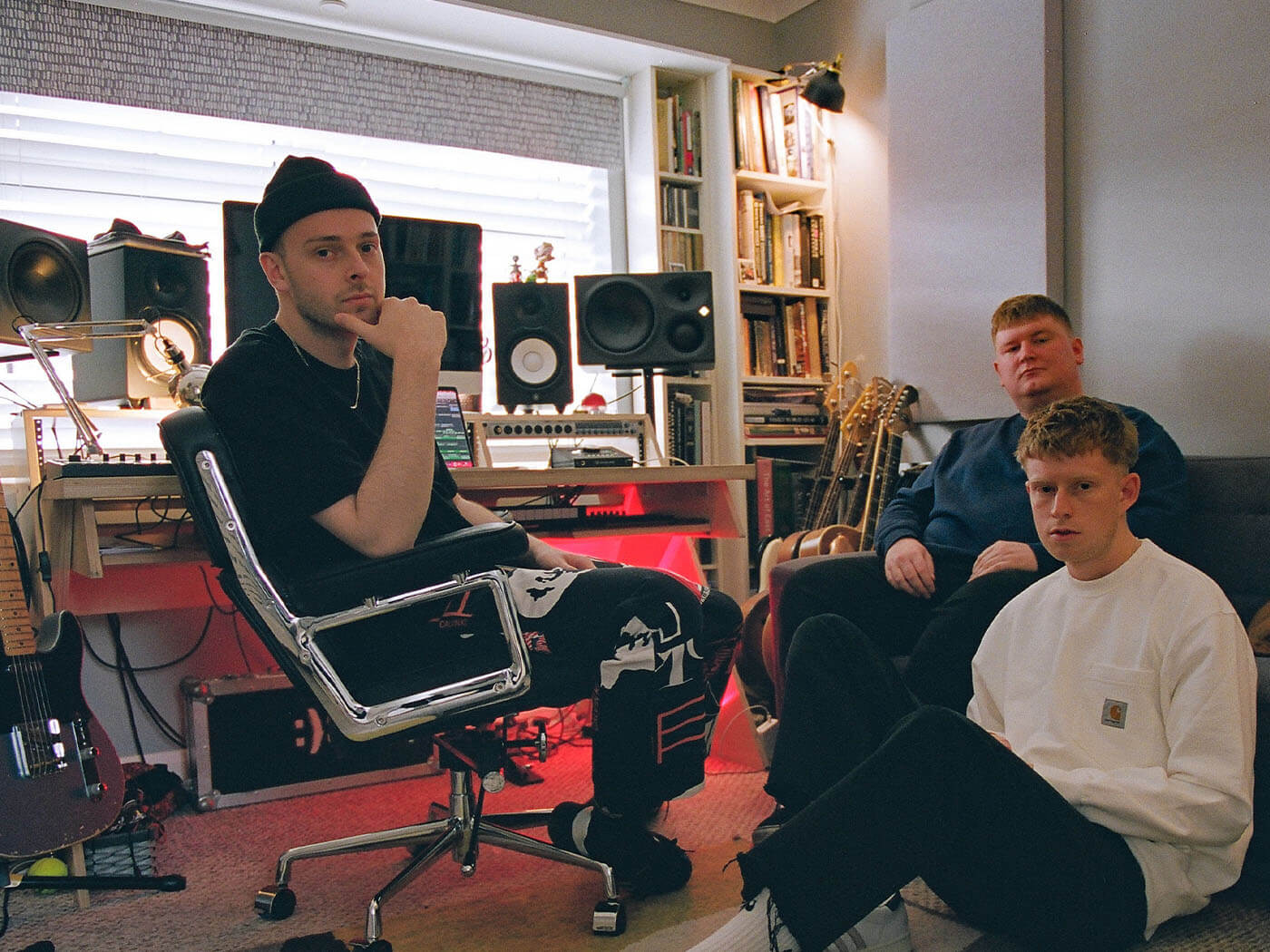 Settled in the seaside town of Worthing, England, NOISY cook up mosh-pit bangers that embody the UK sound, with clear influence from the likes of Chase and Status and The Prodigy. The trio comprises singer Cody, guitarist Connor and producer-guitarist Spencer, whose friendship was borne out of skate park sessions. Despite only 18 months in the game, the lads are signed to Island records and are set to support Yungblud and You Me At Six next year, and are already building a solid following with millions of streams online.

Their new record, I Wish I Was A…, was the result of a daily routine of collectively recording songs by day and cleaning an NHS hospital by night, critiquing the newly recorded tracks as they worked. We check in with Spencer to hear about the process and what gear makes all this possible.

MT: Tell us a bit about the studio, Spencer.

Spencer: The studio is a home setup and we have been working in this environment for about four years now. We used to be in a previous band where we would go to a studio and have a producer take the reigns, but this way we have full creative control and can go in any direction we want. That’s how we found our sound – by stumbling across it. It’s also just a chilled vibe and there’s less pressure because you’re not on the clock 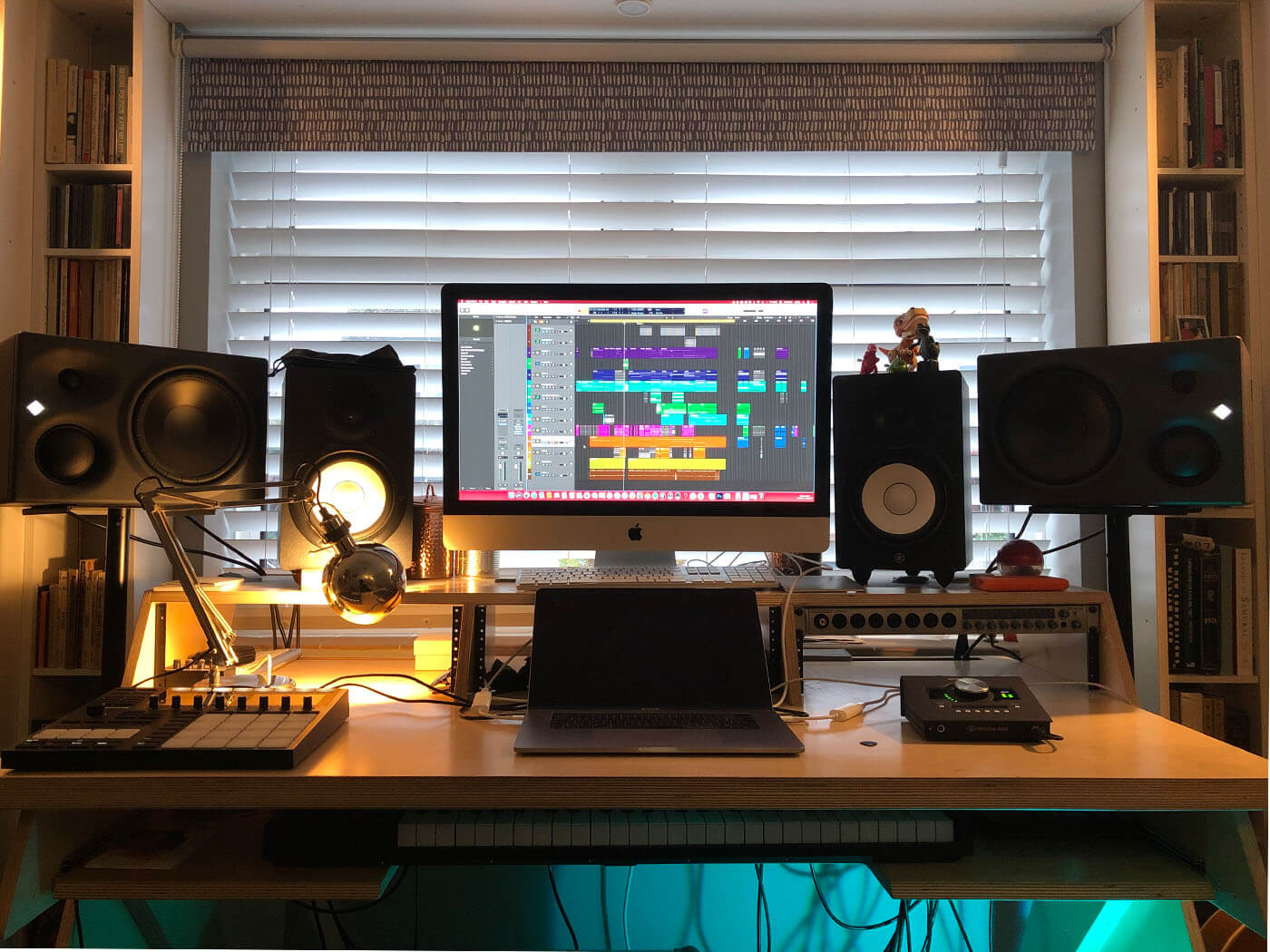 We do everything here. It’s a mix of live recordings and samples. We record guitars, bass, vocals and percussion. Everything else is mainly samples or field recordings when we’re out and about, or, at a rehearsal, we’ll just record jams of our session drummers breakbeats. We have recorded a kid’s choir for a few tracks outside of here though.

Logic Pro X. I’m just very familiar with this DAW as it was the first thing I tried and witnessed being used, so it seemed the easiest to access. For me, it just appears very clear. To move around and manipulate sounds quickly is important – apart from when it overloads(!). I’d like to be able to use something like Pro Tools but I wouldn’t want to jump ship yet. 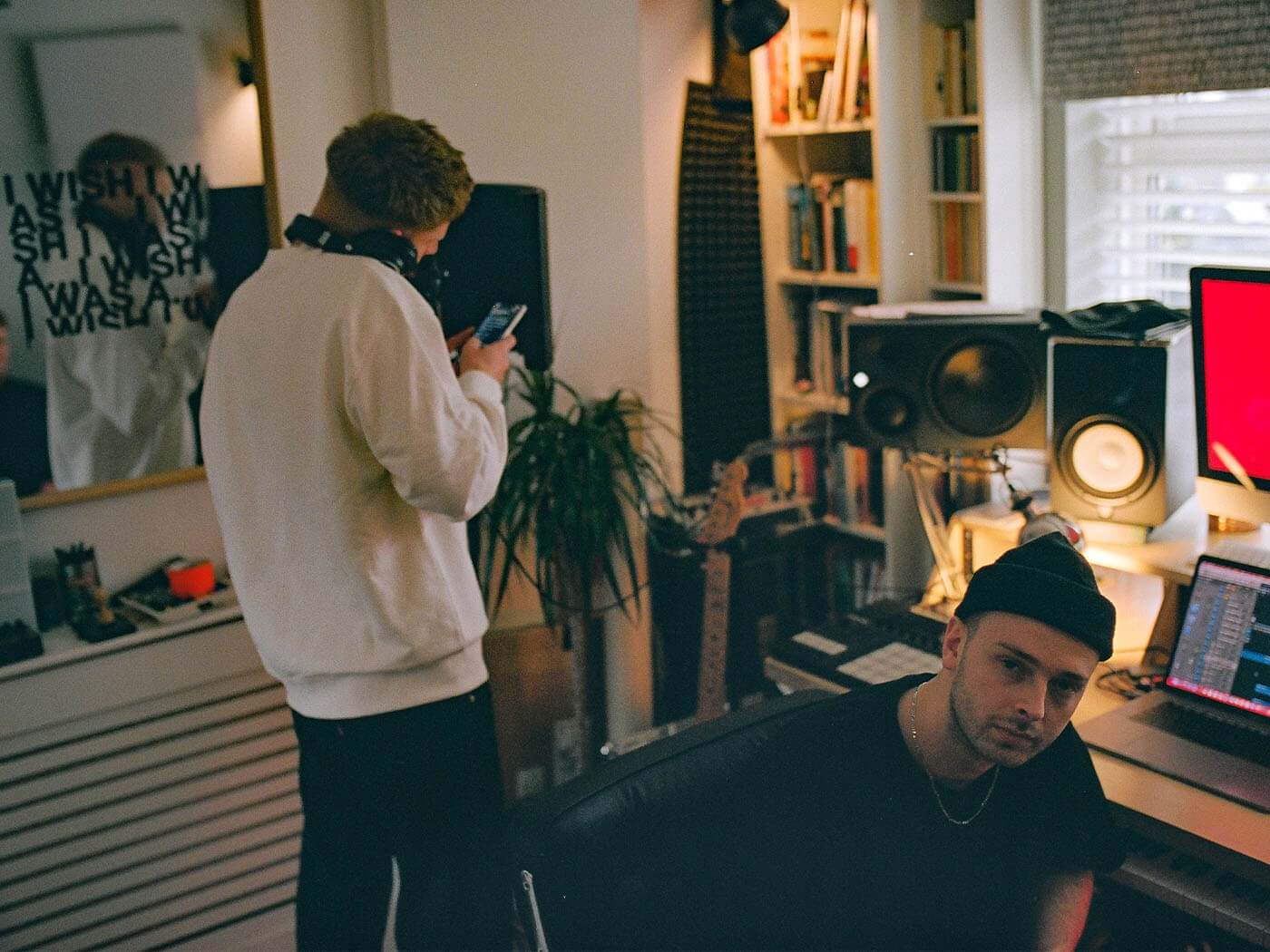 A positive and funny atmosphere is the best type of vibe to have. When everyone’s just messing around cracking each other up, it’s the best. It loosens you up ready to create. Although the laughter can get distracting at times but it’s a balance. I think sometimes the best things you make are when you’re not thinking about it and you can just let it happen without overthinking.

We’re told the three of you listened back to your tracks while pulling night shifts cleaning in a hospital. You also have two sets of studio monitors – what’s the general process for checking your mixes as a trio?

We used to start writing about 10 am, make an idea or sometimes even complete a pretty fleshed out song and then go to the hospital at 5 pm. We would then be listening to a recorded voice memo from the studio – we love the way a voice memo of an unfinished song sounds, it’s pretty weird but it has an energy. We’d be texting each other at work or even get put in the same work zone and just chat about what to do the next day with the song. We might even just go back to the studio after work and finish it till the early hours. We were pretty good cleaners and got the job done…more or less.

With the Yamaha HS7s, I mainly use them to check a final mix or when it gets late and don’t want to blast with the extended low end from the Neumann’s. The HS7s used to be my main monitors and I do think they sound great. The main thing I use to check a mix, though, is Apple earbuds. I think they are the ultimate test to hear if a song sounds great.

Tough question. I’d have to say the computer because it contains all our software and I don’t have the guts to splash out on all the real stuff. Not yet anyway. Maybe ask me again in a couple of years! 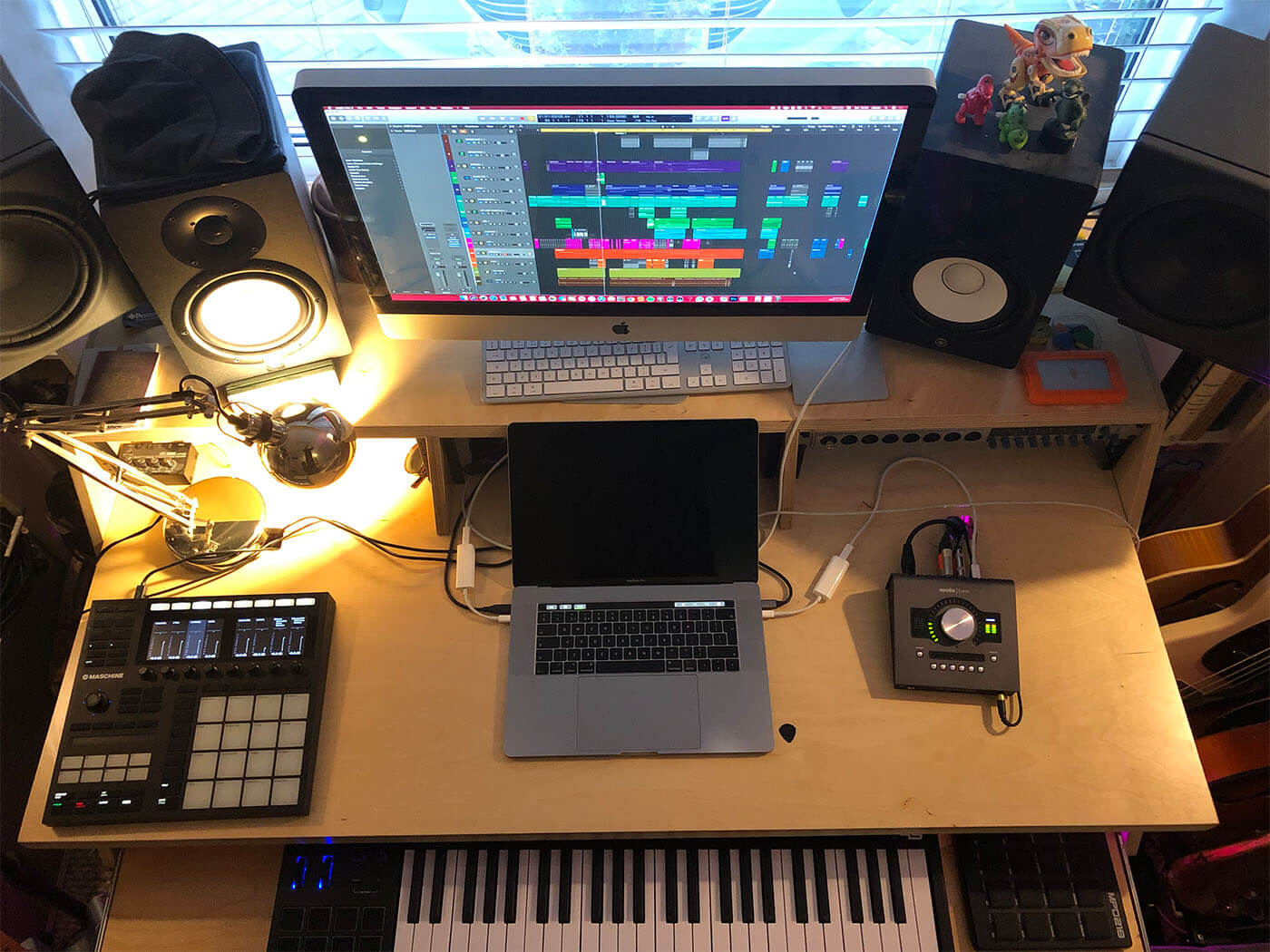 I’d take my Telecaster because it’s my baby and is the nicest guitar that you could play, it just feels good.

What instrument or effect can be heard the most on your new EP I Wish I Was A…?

I’d say one of the most used plug-ins on the EP would be the SoundToys Little Alterboy. I always use that on a parallel vocal send and just put it on the robot setting, make it do a pedal note and maybe create harmonies this way. I’ll also just put it on exotic and weird instruments and experiment with the formant and distortion controls to completely mess it up. Another go-to is Output’s plug-ins. They are all amazing and have some great synths, especially the basses in Substance. Lastly, I can’t not put the Camel Crusher” on things. It’s an amazing distortion and its free.

Love the pedal collection you have. Can you tell us a bit about your favourites and how they got used on the record?

Thank you. One of my favourites is the Caroline Kilobyte. This is a crazy delay, with a switch that you hold down and it oscillates on the dialled repeats but starts to distort and warp over the duration which is great. Another favourite is the EHX Pog for some synth/octave sounds. This was used on the ending guitar lead on I Wish I Was A.

A lot of the drums on the EP sound like sampled breaks. What’s your drum production process?

Yes a lot of them are. There’s a lot that goes into the sample selection. I’ll pull in a ton of sounds and see what combination works best and then mix the ones I like together. If they’re drum breaks, I’ll chop them up and find the right pocket for the song and then from here it’s about effecting it right so it punches. I like to use the Slate VMR for overall drum buss processing and then usually a parallel bus with some slamming compression. My go-to effects are SSL, Decapitator, Devil Loc and VMR.

The MacBook was the biggest and I’d say yes and no [laughs]. It’s great because it lets it all happen and has amazing capabilities, but also very frustrating at times when it overloads and the screen starts to glitch out after three replacements. I can’t complain too much along as it gets the job done.

When we got the Neumann speakers, it was very apparent how much low-end mud was building up at the back of the room. When you changed position in front of the desk, the sound wasn’t consistent so we bought some GIK acoustic panels which helped massively. I’ve got a bass trap at the back of the room and two panels to the side of me with a cloud above, so the listening position generally sounds great now. Cutting a bit of the low frequencies on the speakers helped too. 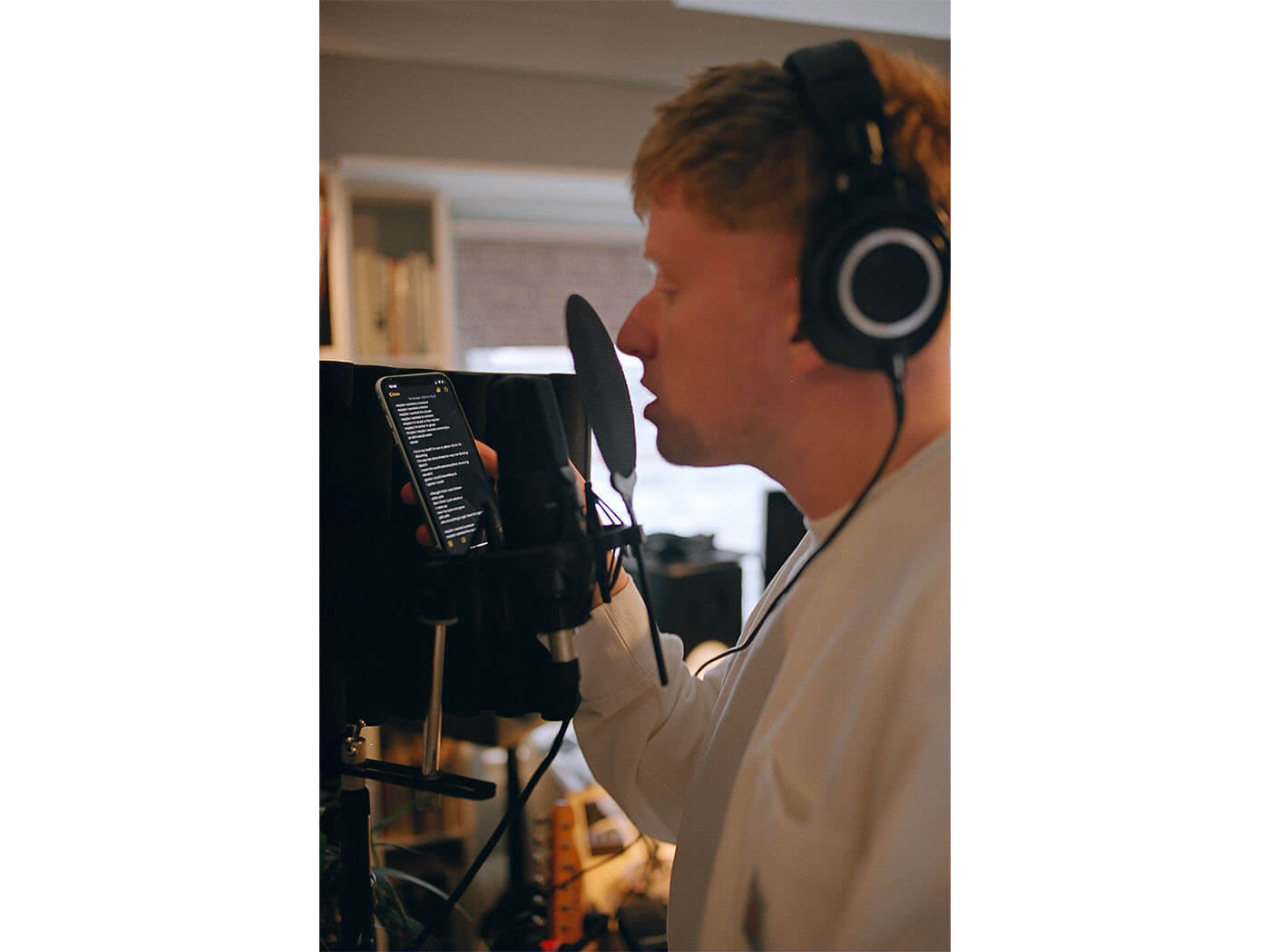 I’m looking at getting some more UAD plug-ins like the SSL selection. I’m using the waves SSL channel strip a lot right now for a filtered radio effect but want to hear if the UAD version has some more depth. Also, I think a new mic is on the horizon as our’s is on its way out. We’ve used this £100 mic on everything for years and years but recently it’s started playing up so it might be time to upgrade.

Dream gear would probably be a Moog so I could get up close personal with the controls. Or a wall of analogue gear because it looks cool (Joking…kinda). 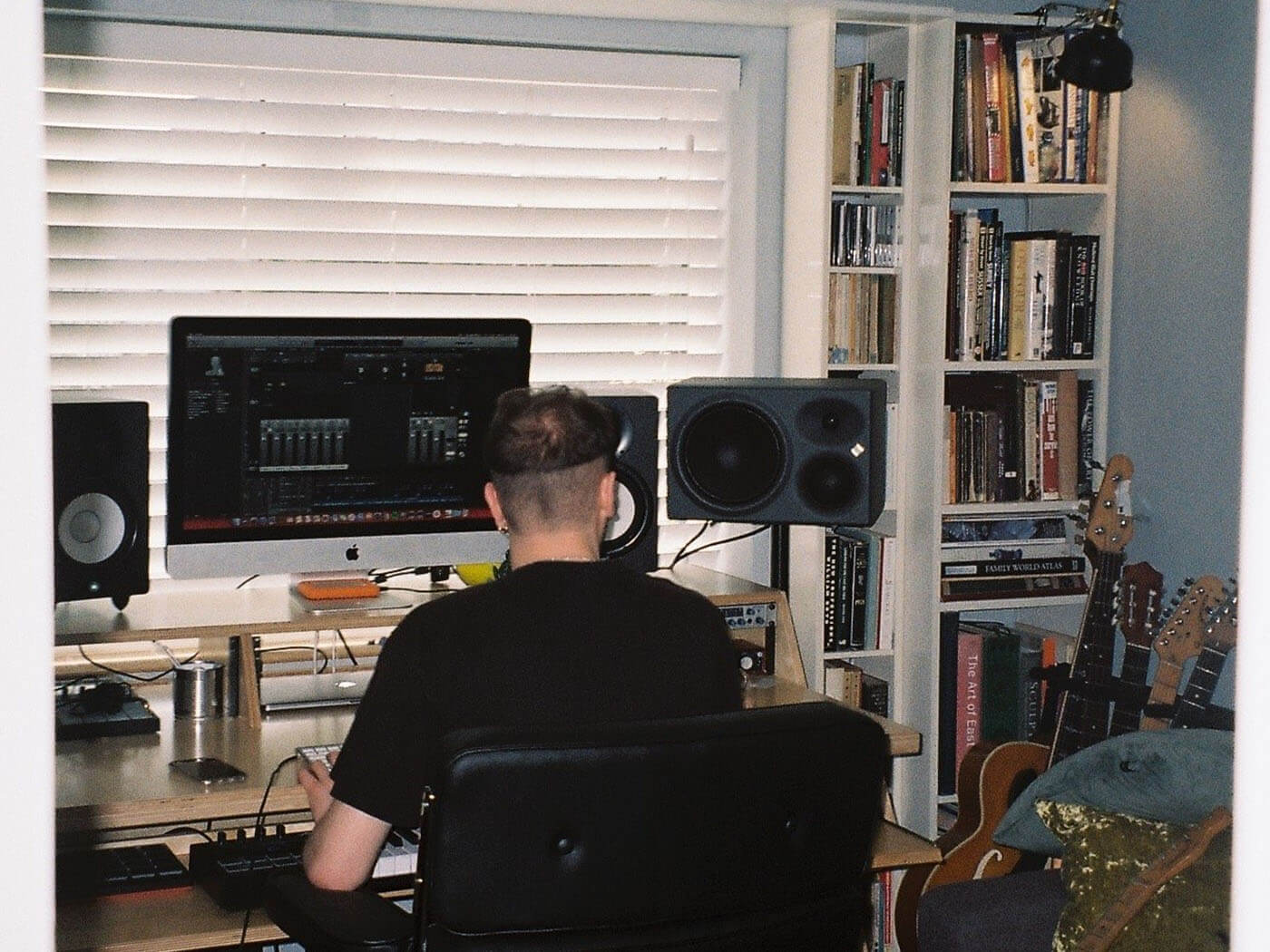 Don’t put any limit on what type of thing you can make. Just try anything and use any instrument or effect, because there are no rules and I feel like that’s the only way to find something new – by doing opposites and step outside the box until you get the eureka moment. Also, YouTube is your best friend. I’ve learned everything from YouTube tutorials so I think that’s a great tool for improving your knowledge and skill. Just don’t let it get in the way of experimenting. Sometimes the wrong way is the right way.

Take your time with building, it doesn’t need to be overnight. The main thing is making great music or making it sound great. You don’t need all the gear to make something pop off, we’ve done everything with very minimal stuff even now it’s still pretty minimal. This way, you can hone your craft and start expanding the equipment progressively with more plug-ins or hardware. It’s about learning certain things well and moving forward, then get all the gear!

Check out the music video for the title track of I Wish I Was A…, NOISY’s new EP.