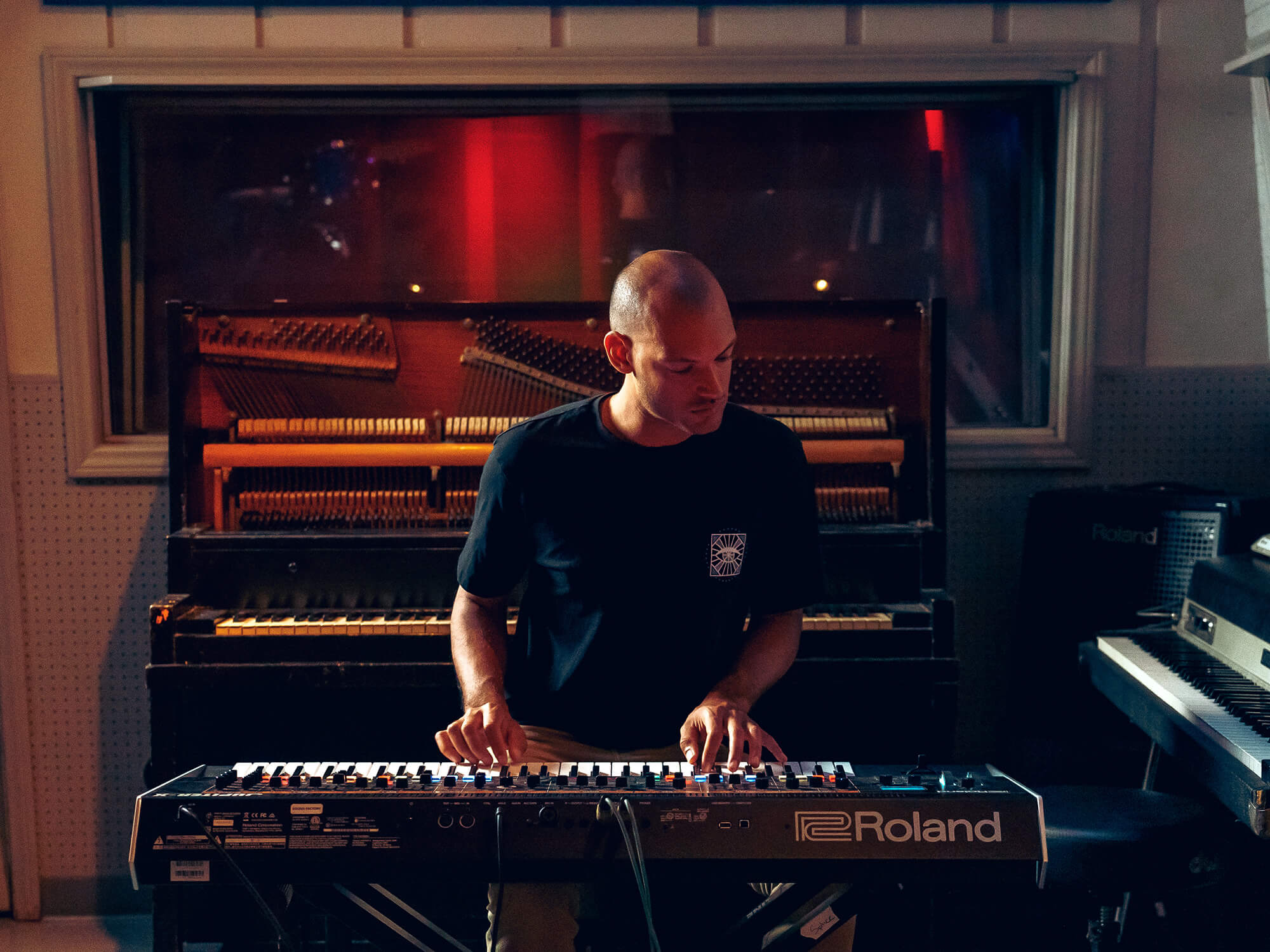 “Many music-makers forget that they’re trying to tell a story”: Austen Jux-Chandler on working with Kali Uchis and Adele

Austen Jux-Chandler has worked on some outrageously successful records. We learn how he left London for LA to conjure up vocal magic in the studio.

“A lot of music-makers forget that what they’re trying to do is tell a story, to transmit an emotion from one person to another,” says Grammy-winning engineer and producer Austen Jux-Chandler from his LA home. “Of course, technology is important, but these original aims can get lost if you’re focusing on finding the best plug-in or DAW.”

The studio innovator is unpacking what’s needed to bring a track to life in the age of TikTok pop, a genre he’s well-versed in. Over the last decade, Austen has forged close relationships with an extensive list of A-list musicians and artists from various worlds.

During his time at London’s famous Dean Street studios, located in the heart of Soho, Austen’s helped everyone from string ensembles to chart-topping artists find their sound. After picking up a Grammy for his contribution to Adele’s 25, he’s now operating out of Hollywood and developed a collaborative relationship with Latin Pop megastar Kali Uchis. Amid the myriad accolades and headline-grabbing names, Austen believes a personal approach has been just as vital in furthering his career as his technical touch.

“It’s all about establishing a level of trust between you and the artist,” he says. “Then, working out how your skills can help them realise their vision. You’ll create better music and develop and improve your abilities.” 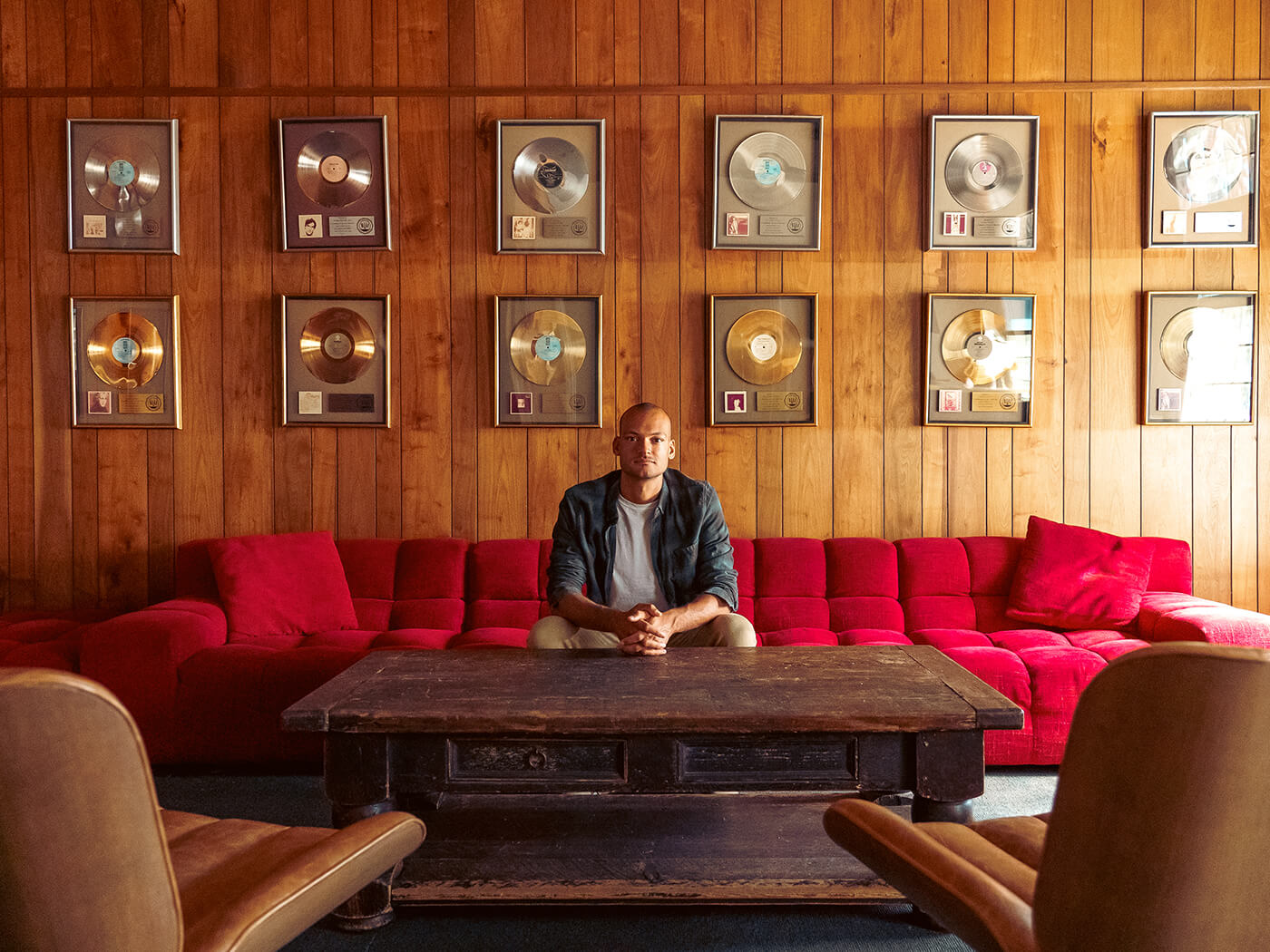 Austen spent his formative years kicking around musical ideas in various bands before delving deeper into the mechanics of record making. His curiosity ramped up to the point that he went to Huddersfield to pursue music technology at university.

“I’d read Tony Visconti’s autobiography and began to understand more about the role of a producer,” he remembers. “I certainly wanted to work in music but wasn’t sure how until I went to university.”

During his studies, the opportunity for a placement year in the industry came up. Fuelled by stories of David Bowie working, writing and partying through Soho with Visconti, Austen headed to Dean Street Studios to start progressing his career. He repeatedly applied to join until they eventually took him on as an intern.

“It’s obviously a challenge to even get an interview when you’re starting out, but I was set on working there,” he states. “I loved the history of that part of London and did what I could to make it happen.”

Austen’s role at Dean Street Studios proved to be a pivotal one. He joined in 2008 and was soon working with indie outfit Reverend and the Makers as an assistant engineer alongside producer Jagz Kooner. Austen soon gained new perspectives on how to run recording sessions and the key roles involved in creating an album.

“Both the band and Jagz made me feel like part of their musical family, and it was a great example of how the different processes and roles work,” he says. “It made me understand the engineer’s contribution to the recording as a whole.”

Alongside Jagz’s restless experimenting, the project also demonstrated a producer’s responsibility in maintaining energy and keeping creativity flowing while recording. 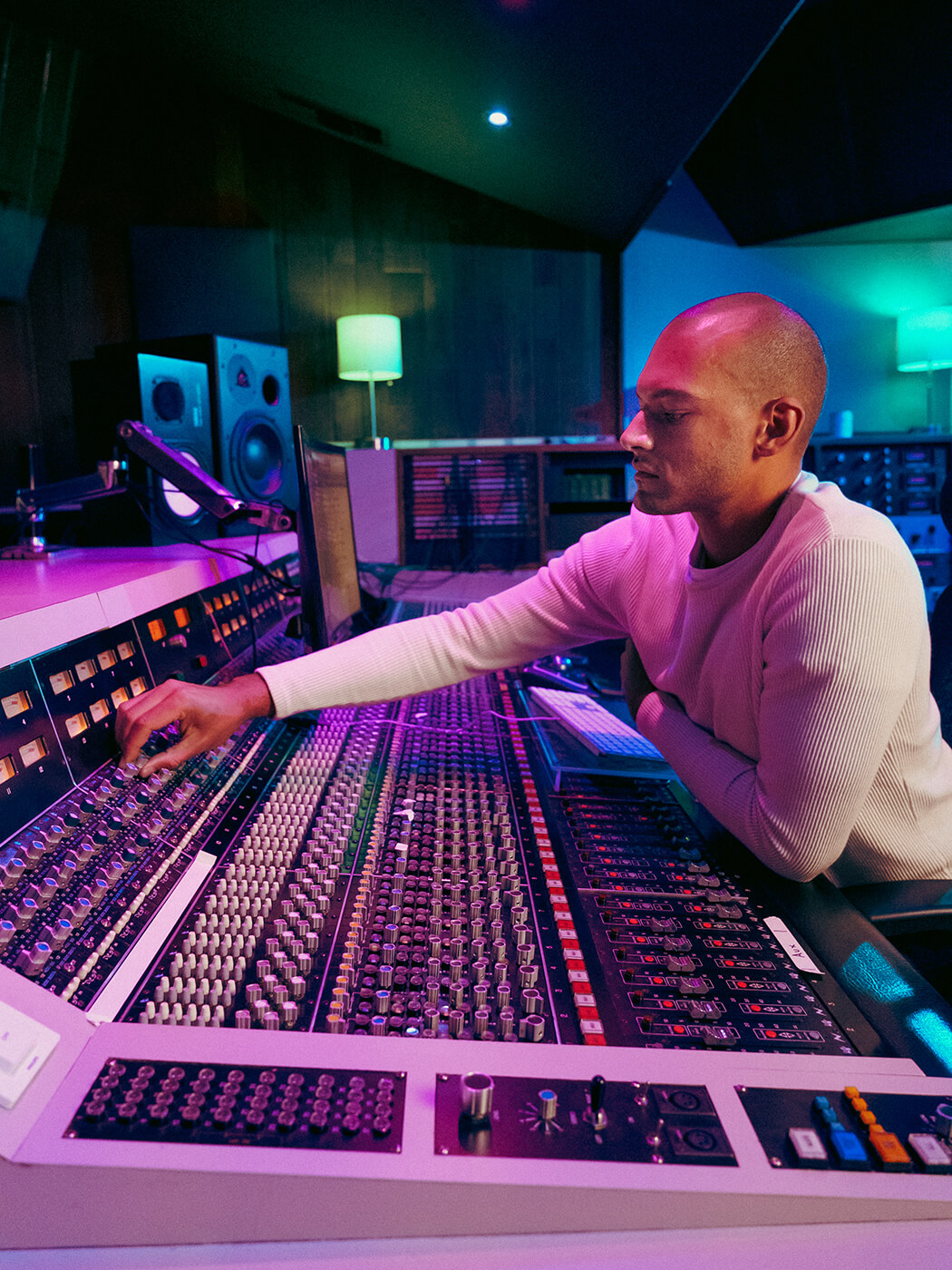 “We’d constantly experiment with mic positions, move the drum kit around, then put samples and vocals through guitar pedals,” says Austen. “It was a fun session to work on, and I learned a huge amount about dealing with the dynamics of a band.”

Austen never looked back from this point and began polishing and developing his skills so he could adapt to whatever sound came through Dean Streets’ ever-revolving doors.

“One day it would be a full band, another a jazz outfit. We’d be working in any genre at any time of day,” he recalls. “Becoming so close to all the gear and being thrust into tricky situations meant I was adaptable in any situation. The technical side of the studio became ingrained in me.”

His knowledge didn’t go unnoticed, leading to sessions with pop royalty such as Marc Almond, Ed Sheeran and Adele as his credit list expanded. He was propelled into an illustrious musical world where he was taking on ever-bigger projects. This included a session in Paris with Lady Gaga after previously impressing her and her team.

“I had been learning how to use Melodyne for vocal tuning on a project with Marc Almond from Soft Cell,” Austen says. “It was a complex, classical work with intricate parts that he wanted to sound as natural as possible. When I was called into work with Gaga, I demonstrated my prowess with vocals again. It gave me the confidence to begin considering my future.” 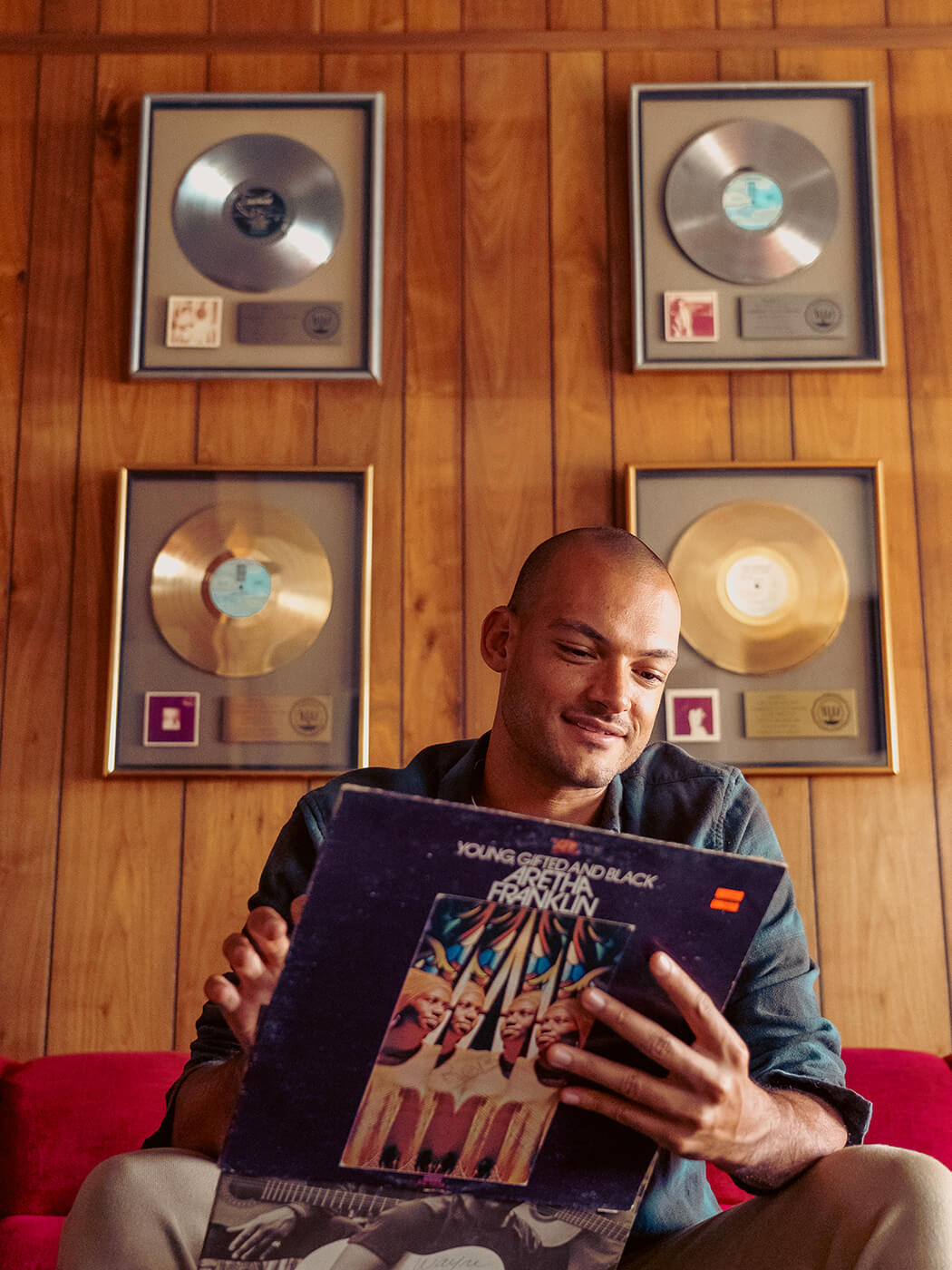 Austen had leapt into freelancing by the time Plan B knocked on his door to enlist him as co-producer and engineer on what would become the 2018 album Heaven Before All Hell Breaks Loose. Around the same time, Austen was named as a Grammy Award winner for his work on Adele’s 25. During the recording of Plan B’s hit album, Austen was putting his efforts into arranging various visas ahead of a move to LA.

“I just thought ‘fuck it’, I didn’t have kids or a mortgage, so I went for it,” he laughs. “When I got to the US, I leaned on my networks and gradually started putting my face and name around. I went for coffees and drinks, then eventually work started coming back. That’s how I landed the gig with Kali.”

Kali Uchis is the American-Colombia star working in a rich vein of sugary pop that has taken the musical world by storm over the last few years. She’s collaborated with everyone from Kaytranada to Jorja Smith, and her latest album with Austen and her team, Sin Miedo, has been a global smash. The lead single, Telepatía, recently surpassed the 500 million streams milestone on Spotify. Even with her global success, her relationship with Austen kicked off auspiciously.

“Interscope got in touch and asked if I wanted to do a trial session with Kali,” says Austen. “Before me, she’d worked with six different engineers in a year, but the adaptability I learned at Dean Street held me in good stead. The A&R gave me the thumbs up and just grown from there.”

Their creative process is an immersive one, with Austen as the protector of Kali’s sonics. He works hard to ensure she can just focus on her writing and performance rather than the technological side of the creative process.

“Kali’s a true artist. She writes music, paints, directs her own videos and has her own fashion line,” says Austen. “My role in the studio is to hold back the rest of the noise around her so she can concentrate on melodies, lyrics and all the other songwriting parts that feed into her music.”

The futuristic pop gems of Sin Miedo were polished over the course of a year with tracks built up through melodies, sketches and a constant back and forth between the pair. Rather than each track taken individually, different aspects of each song are explored simultaneously, which is why Austen believes the album’s sound is so cohesive.

“It’s a real body of work as we’re constantly juggling different songs in the studio. We have vocal levels on one track, then look at the mix of another,” he states.

Austen’s aim is to provide Kali with the freedom to come up with harmonies, hooks and grow the tracks as organically as possible before he steps in.

“It’s not the normal producer role,” he says. “I let her do her thing, then go through it and assemble the pieces – the comps for the lead vocal, creating double tracks from what she’s recorded, or get her to do them as separate takes.”

He manually arranges the track edits to tidy any of the finished product and make sure “everything is tight”. It’s a preferred way of working, opposed to refining material in Vocalign or Autotune.

“In the bigger pop moments where there’s more space to play with, I’ll always add in ear candy bits too,” Austen says. “It might be delay or reverb to one lyric. I might reverse parts, add weird effects, move certain backing vocals to one side, or use pitch delays. These are standard tricks, nothing magic.”

“Ultimately, it’s about representing the emotional content of the song,” he continues. “If there’s anything inhibiting the vocals, then it will detract from that. My role is to look into the finer details to ensure this doesn’t happen.” 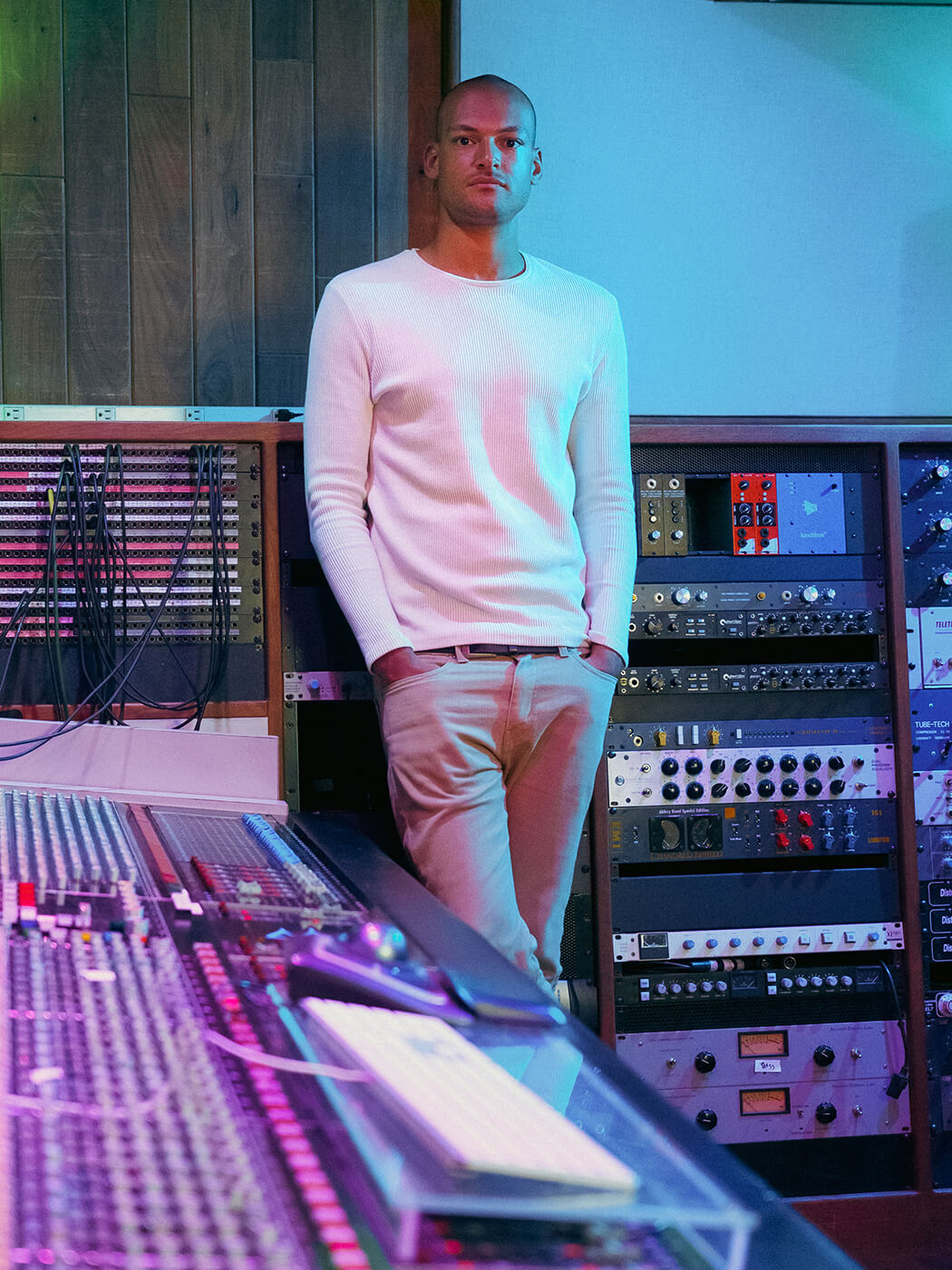 With such eye-watering success, it’s unsurprising that Austen is a busy man, continuing to collaborate as a vocal producer with Kali and other rising artists, including Sofia Reyes, Karina Sofia, Carlos Zaur and Awgust.

His future ambitions, alongside the creative side of the business, includes fighting the corner for engineers, particularly in a musical world where he feels the lines between different studio roles are becoming increasingly blurred.

“Engineers play a huge part in the record-making process, and are involved all the way up until mastering,” he says. “Yet they don’t receive any royalties. I’d like to see this change, as every part of the final sound goes through their hands.”

Although Austen is still considering how these aims can manifest themselves, he says engineers need more support, guidance and infrastructure to help them.

“I’m in it, I’m here and got to a certain stage in my career where I’m well-placed to help others,” he says. “I’ve got my foot in the door so let’s see who I can bring in with me.”