Pro Tools 2018 brings with it a new way of importing your templates, based on a favoured “hack”. Mike Hillier helps you get to grips with the new Track Presets function… The switch from major updates every few years, to a subscription model with rolling updates, has seen a raft of improvements both big and […]

Pro Tools 2018 brings with it a new way of importing your templates, based on a favoured “hack”. Mike Hillier helps you get to grips with the new Track Presets function… 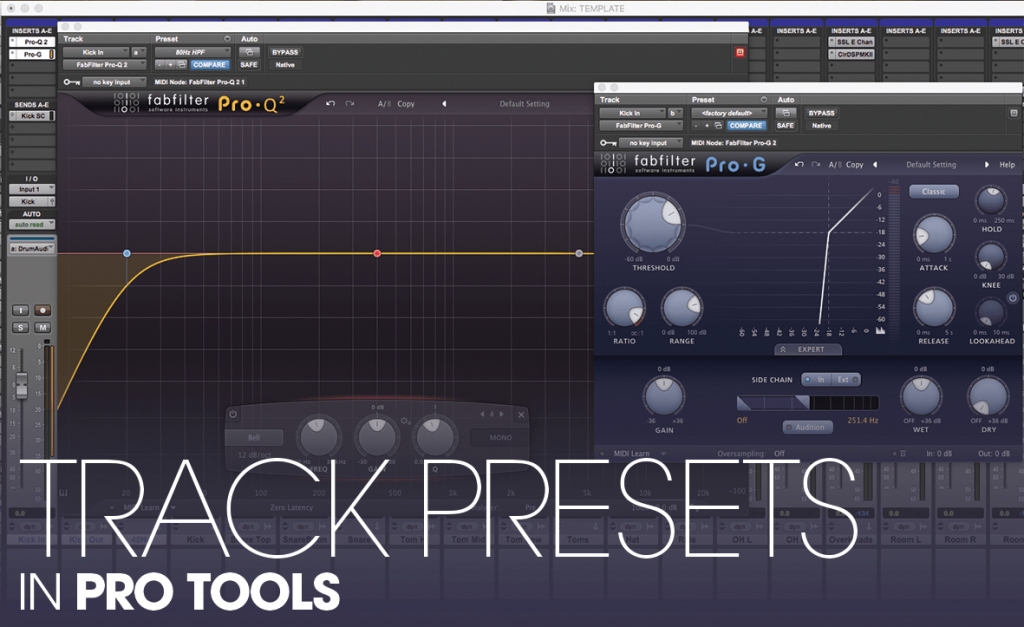 The switch from major updates every few years, to a subscription model with rolling updates, has seen a raft of improvements both big and small come to Pro Tools recently. While some of these have simply been previously HD-only features making their way into the standard native version of Pro Tools, many are completely new features, with Avid listening to users and implementing many of the most requested features.

Listening to the users

The most recent batch of updates – which also saw Pro Tools switch to a year-based naming convention, rather than the previous sequential numbering, which more suitably represents the new rolling upgrades model – includes one of our own most requested features, Track Presets.

Those of you who constantly scan forums and user groups online, will be aware of a previous “hack” which enabled you to create your own track presets. This workaround, which required saving channels as templates, placing them in a very specific folder and then renaming the file, was a fudge. It enabled the creation of basic track presets, but with each new version of Pro Tools, the “hack” had to be re-tooled and because it wasn’t officially supported it was possible that any future update would break it.

The new Track Presets feature not only makes it easier to create presets, but also provides you with more ways to use them, making the feature more powerful. And because it’s now officially supported it is unlikely to be broken by a future update.

Track Presets enable you to quickly create a number of channels in Pro Tools complete with inserts, sends, I/O routing all in place. So if you find that every time you track a vocal you like to use the same channel strip, reverb and headphone send, then you can save this as a track preset, and when recalled it will appear with all the effects, sends and routings in place.

Similarly, this can save a lot of time when tracking large sessions, as similar to using a template session you can have track presets ready for every channel you’re recording. And since a single Track Preset can have a number of channels ready to be used at once, you could, for instance, have presets built-up for various instrument groups – so if you regularly track drums with 12 mics (kick in, kick out, snare top, snare bottom, hi tom, mid tom, low tom, hat, overhead L/R and room L/R) you could have a single preset create all 12 channels, named, panned, bussed to a single stereo drums aux, all with your favourite drum plug-ins already in place.

But why stop there? Why not create different presets for all your most common drum mic-ing techniques, different sized kits, etc. Alternatively you can now create presets for virtual instruments – particularly those with multiple outputs, such as a drum sampler – adding not only the instrument channel, but also all the necessary Aux. channels named and routed to the relevant outputs of the drum machine.

Track Presets can even include audio and MIDI files, which could be useful for quickly importing a regularly used sample, a click track, or even for trying out beats. TV, film and radio editors may want to use this to add a regular audio logo, ident, or sting to the show.

A further advantage of the new Track Presets feature, which wasn’t possible with the previous work-around, is the ability to add effects from a Track Preset to an existing channel in your project. So if you are sent a blank project ready to mix, you can quickly build up a basic mix using presets, adding effects to all channels, creating group busses and sends with only a few clicks.

The basic Pro Tools installation comes with a number of built-in Track Presets, using the built-in plug-ins, and while these can provide a useful starting point, to really get the most out of the new feature you will want to build your own. Especially as you build up your plug-in collection.

1. Adding a Track Preset is done in the same way as adding new Tracks to your Pro Tools project. Use Track > New (Ctr+Shift+N (PC) or Cmd+Shift+N (Mac), then selecting a Track preset folder from the track type drop-down menu. 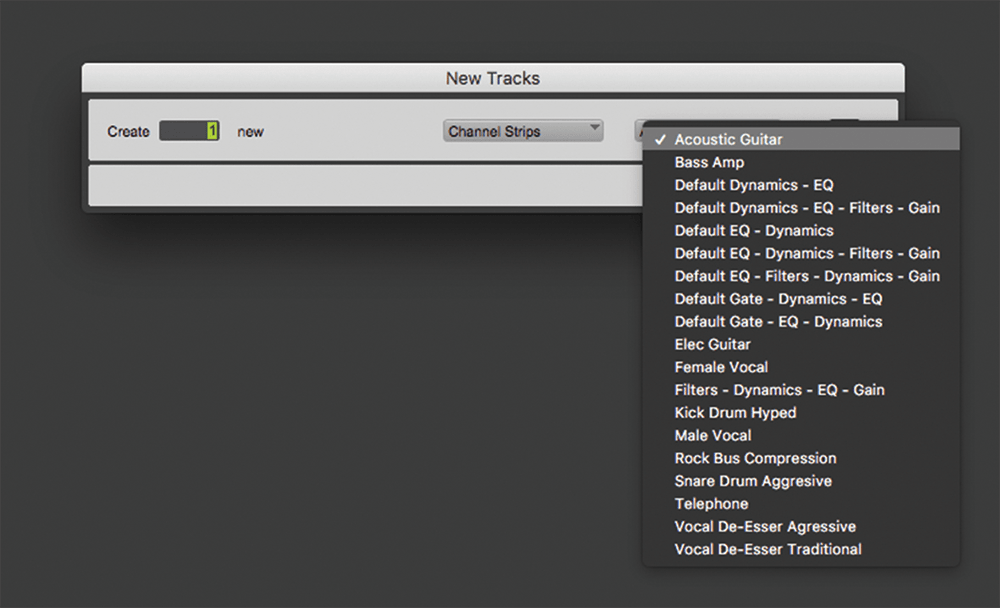 2. Once you’ve chosen a track preset type you must select the specific Track Preset you want to use from the next drop-down. Scroll through this using Shift+Ctrl+Up/Down (PC) or Shift+Cmd+Up/Down (Mac).

3. You can add as many new tracks as you need from this window, by using the + button (Ctrl+[+] (PC) or Cmd+[+] (Mac)). Here we’re adding enough new channels to approximate a basic drum tracking session.

Sound Library We like to build up a library of reference tracks in a single Audio Channel in Pro Tools, using playlists to store each audio file. With Track Presets we can now save our reference track complete with all of the audio files as a preset, ready for bringing in to any session. 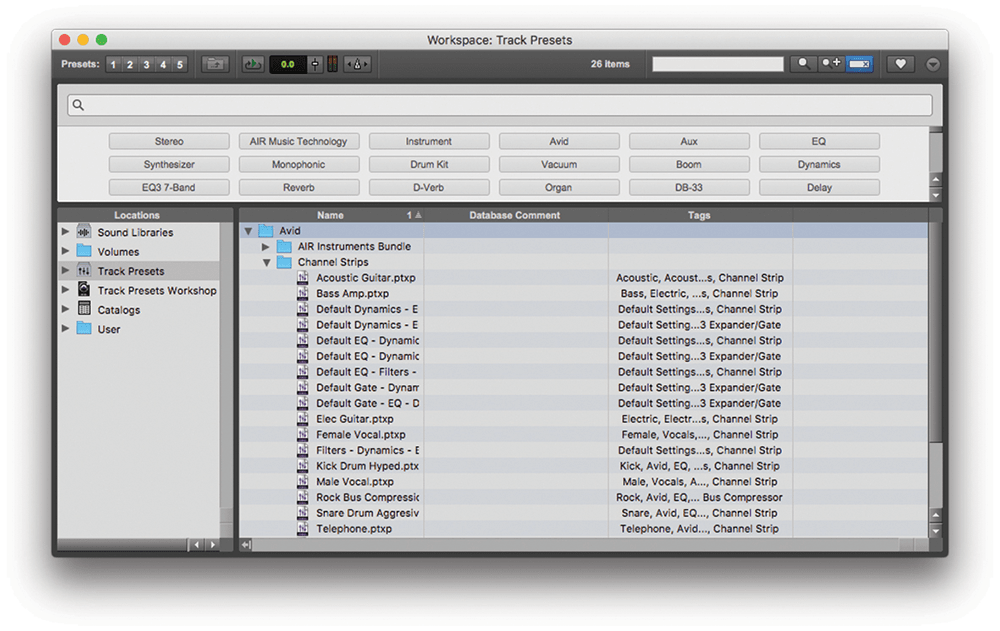 4. An advanced method for importing Track Presets is from the Workshop browser (Alt+I). Browse the folders or search for presets by tags. Our basic kit doesn’t have a hi-hat channel, so let’s import one by searching presets tagged “Hi-Hat”. 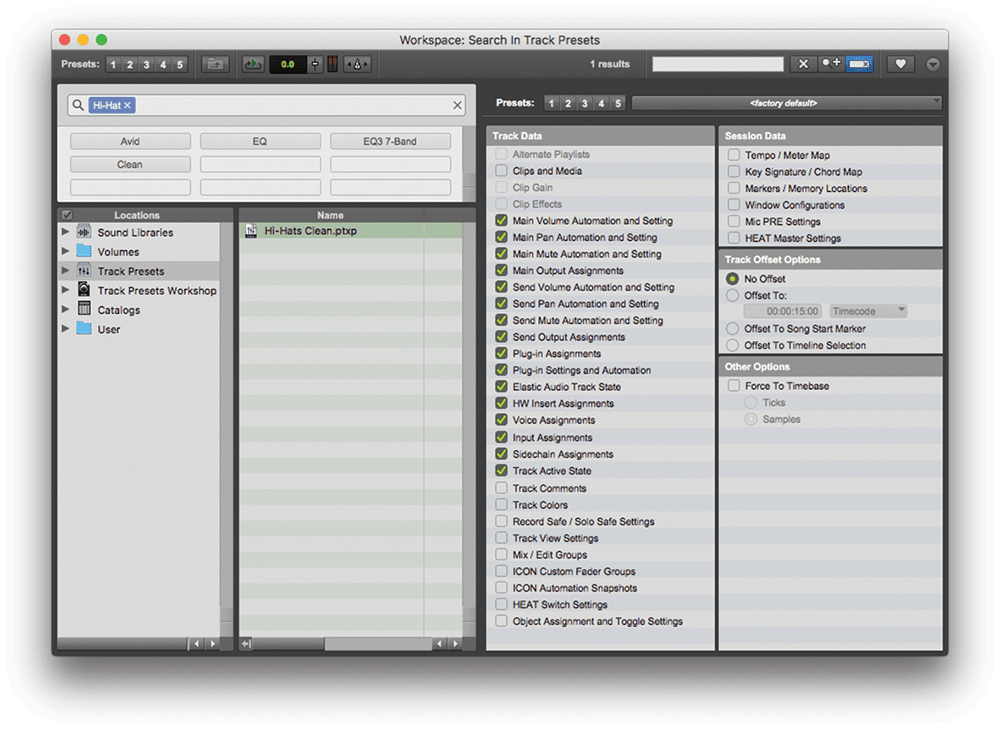 5. Once you’ve selected a Track Preset in the Workshop browser you can fine tune what is imported with the preset. This can include Track Data such as which plug-ins, routing, level and automation and Session Data such as tempo and meter. 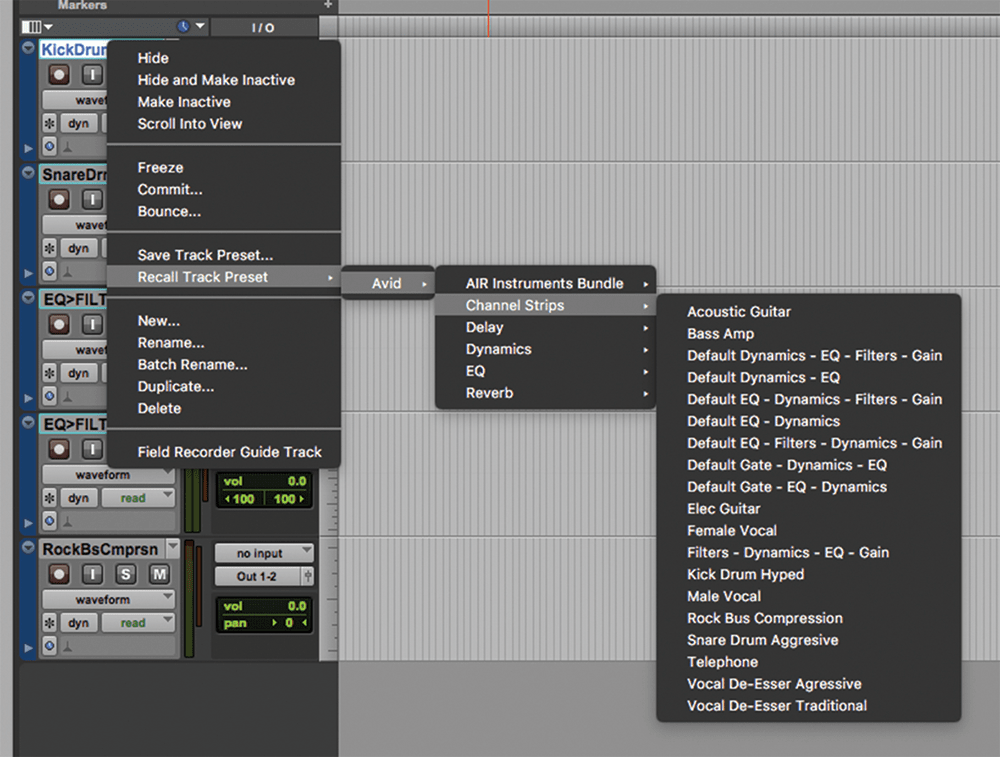 6. In addition to adding Track Presets from the New Track window, you can add them to existing channels in your session. The tracks must match those in the Track Preset both for number of channels (mono/stereo) and type (Audio/Aux/Master, etc).

Learn how to create track presets for live and virtual instruments