The theories and practices behind orchestral recording contrast sharply to the accepted wisdoms of popular music recording. Mark Cousins has the score.  The M 150 is Neumann’s current version of the classic M 50 that was originally used in the 1950s Decca Tree. The art of recording an orchestra is a process that has evolved […] 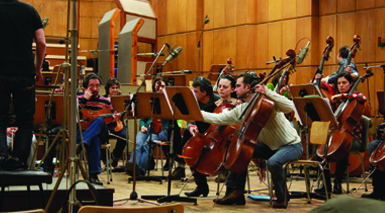 The theories and practices behind orchestral recording contrast sharply to the accepted wisdoms of popular music recording. Mark Cousins has the score. 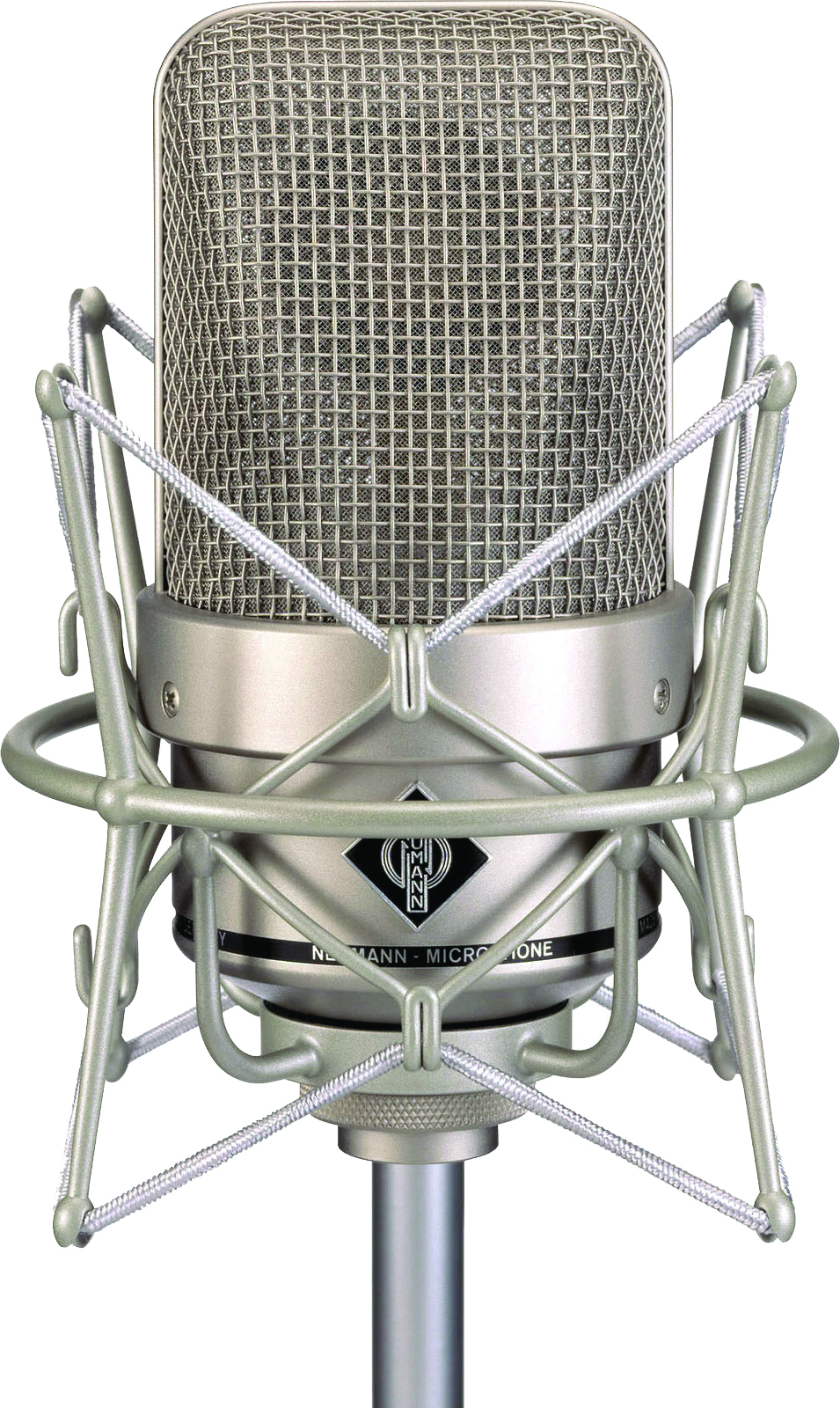 The M 150 is Neumann’s current version of the classic M 50 that was originally used in the 1950s Decca Tree.

The art of recording an orchestra is a process that has evolved throughout the history of recorded music, from the earliest days of cutting music directly to disc through to today’s cutting-edge 5.1 blockbuster soundtracks. Indeed, it’s interesting to note the strong parallels between the film world and that of orchestral recording, with a distinct ‘cross-fertilisation’ between the two disciplines. It’s also an area of recording with a distinct process and methodology all of its own, offering a refreshingly different workflow and set of sonic objectives for those who’ve grown up with endless overdubs and a barrage of close-mic’ing.

Before we delve into the specifics, it’s worth going through the objectives of orchestral recording and why it might differ from that of a traditional ‘band’ recording. First and foremost, it’s interesting to note that most orchestras are a self-balancing phenomena – in other words, each instrumental part can be distinctly heard without the need for additional mic’ing or amplification. Another important entity is the sound of the room, understanding that the reflections and a sense of acoustic space are an integral part of the sound of an orchestra, just as much as the instruments themselves. 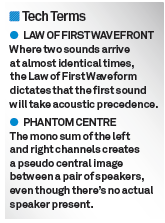 Pairing up
Given the objectives we’ve described, it’s a logical conclusion that a stereo pair, in some shape or form, should define the main body of sound that we hear on record. In the early days of stereo recording, though, there were two distinct camps, each prescribing a different solution to the means of capturing a stereo performance. 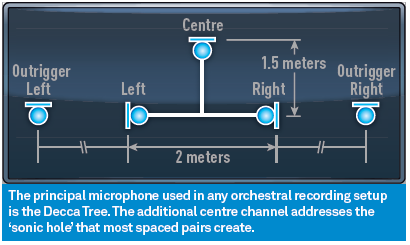 One school of thought – pioneered by engineers such as Alan Blumlein – sought to capture stereo information through intensity (or level) differences between the left and right channels. The use of directional mics in this way articulated an accurate stereo image with good phase integrity, but it somewhat lacked the ‘cinematic’ width that engineers and musicians heard from a real orchestra.

The alternative was a spaced pair arrangement, which did an excellent job of capturing the width of an orchestra but often failed to capture some of the detail inherent in the intensity approach, as well as leaving a distinct hole in the centre of the stereo image. With clear pros and cons to both methods, engineers at Decca Studios in London looked for an alternative solution – a technique that would have the cinematic width of a spaced pair but retain the detail and focus – particularly in respect to the centre image – that two directional mics delivered.

Tree surgeon
The solution was somewhat inspired by the world of film sound, where multi-channel standards had been developed to create a discrete track for left, centre and right components. In theory, the centre channel reinforced the ‘phantom-centre’ that two-channel stereo is designed to create, arguably making the listening experience at either side of the cinema far more cohesive. Following this logic, the Decca engineers developed a system using three Neumann KM 56 omnidirectional mics arranged on a T-shaped stand above the conductor’s head.

The Decca Tree – as it was christened – was a simple but elegant solution. The left and right channels, by being positioned around two metres apart, captured a large part of the width of the orchestra. The centre mic, though, is positioned about 1.5 metres ahead of the L/R mics, and thanks to the ‘Law of the First Wavefront’ (aka the Precedence Effect) it ensures that the centre gains a small psychoacoustic advantage over the L/R mics, adding focus and definition the centre of the soundstage.

The final piece of the puzzle was the subsequent development of the M 50 by Neumann in response to comments by the Decca engineers. The M 50 mounted a small omnidirectional transducer inside a 4cm-diameter acrylic sphere, resulting in an omnidirectional mic that had some directional characteristics, particularly in the frequency range above 10kHz. As part of a Decca Tree the M 50 lifted the detail and focus of the stereo image, arguably working almost like a directional cardioid mic in the upper portion of the frequency spectrum.

Good articulations
For a large number of purist recordings, the Decca Tree proved sufficient, but where a touch more control was needed or a more flattering width, it was common to augment this setup with additional microphones. One potential problem of the Decca Tree is that it sometimes fails to capture the full width of the string section, the largest instrument family in an orchestra. This is largely down to the Decca Tree being positioned above the conductor’s head, which is great for picking up the ‘first desks’ but doesn’t capture all of the string players.

To augment the Decca Tree, therefore, a pair of outriggers or side-fill mics are used, positioned halfway between the centre of the soundstage and the extreme left- or right-hand side. On their own, the outriggers’ width would be too extreme, but when bedded-in with the Decca Tree, they provide the extra articulation and width the string section needs.

Spot on
Although the Decca Tree and outriggers form the majority of the sound, it’s still essential to augment these main stereo arrays with a series of spot mics. The spots provide extra focus and detail to instrument groups, partially as a result of their relative proximity to the instrument providing a different timbral response – a double bass, for example, has a touch more weight and body, while the woodwinds gain a touch more air. Just as importantly, though, the spot mics provide a degree of control if an instrument is used in a solo context. 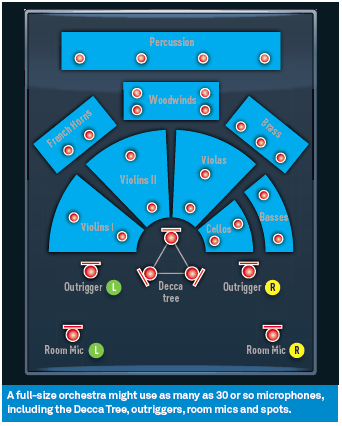 A balance needs to be struck, though, in terms of the number of spot mics used. Using lots of mics potentially introduces the risk of phase issues, especially given the distances involved and the large amounts of bleed between the mics. To reduce the risk of phase, the 3:1 rule is loosely followed, so that the distance between microphones is approximately three times that of the distance between the performer and the capsule. In addition to this, it’s also beneficial to consider a degree of time-alignment, if only to prevent the spot microphones from creating their own form of precedence effect. 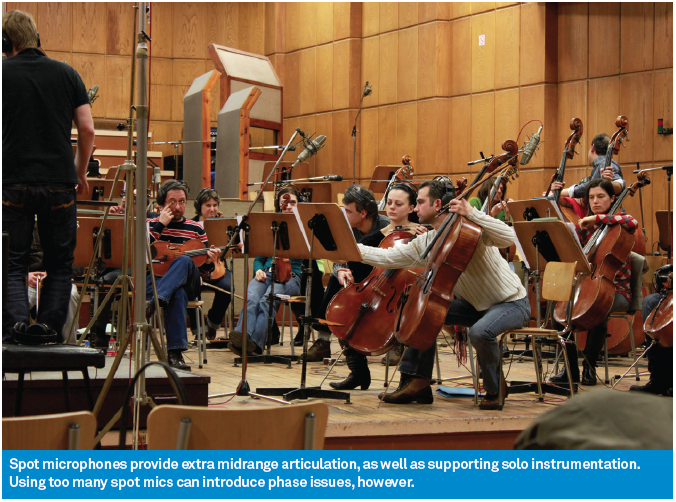 5.1 conversion
Despite the multitude of technical innovations that have followed in the 60 or so years after the Decca Tree was first used, it’s reassuring to note that the techniques developed by Arthur Haddy, Roy Wallace, Kenneth Wilkinson and Stan Goodall remain in daily use in various orchestral soundstages across the world.

Possibly the only minor change in recent years has been in respect to 5.1 surround sound recording, where there’s a distinct ‘neat fit’ with the methodology behind the Decca Tree+spots technique. In the case of 5.1 surround sound, an additional two mics are augmented into the basic setup, usually placed at the rear of the soundstage as part of a spaced pair arrangement. The surround mics capture the acoustic depth of the room – arguably with an exaggerated stereo width, but one that suits the enveloping nature of a true 5.1 experience.

Whether or not you intend to record an orchestra, this method is a fascinating insight into a recording methodology that has carefully evolved over time. Indeed, there’s a lot to be said for applying some of these principles in other genres, especially if you’re after a roomier, more natural sound.