In this digital age, the relative warmth of analogue recording technology seems to have increasing appeal. Mark Cousins turns up the heat. Whether it’s a nostalgic view of times gone by or a genuine musical interest in the sound of valves and magnetic tape, the phenomena of analogue warmth seems to continually fascinate many engineers […] 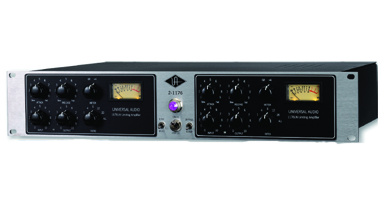 In this digital age, the relative warmth of analogue recording technology seems to have increasing appeal. Mark Cousins turns up the heat. 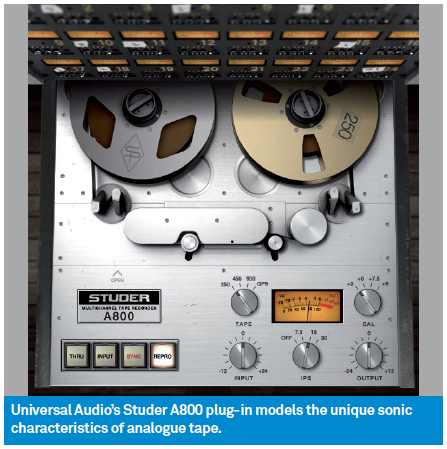 Whether it’s a nostalgic view of times gone by or a genuine musical interest in the sound of valves and magnetic tape, the phenomena of analogue warmth seems to continually fascinate many engineers and musicians. Indeed, with access to high-quality digital multitrack recorders now commonplace, there seems to be an increasing interest in all things analogue – from mixes being ‘stemmed’ through analogue consoles to innovations such as Pro Tools’ new HEAT feature. But what exactly is this elusive ‘analogue warmth’ and, more importantly, are its qualities as beneficial as many engineers make them out to be?

Too hot to handle

To better understand why an analogue device produces ‘warmth’, we first need to consider the fundamental differences between a linear and non-linear response to gain. In theory, a technically perfect audio recorder or signal processor will have a completely linear response – in other words, as the input level is raised by 2dB, so does the output. In many ways, digital recording conforms to this technical ideal, being completely linear as long as you stay within the confines of its dynamic range. Over and above 0dBFS, the response of any digital recorder becomes sharply non-linear, but steer clear of this and you can enjoy a ‘fault-free’ recording and mixing process.

In the analogue domain, however, things aren’t so simple. Despite best intentions, all analogue devices have a degree of non-linearity, with some devices being far more non-linear than others. Unlike digital recording, the onset of non-linearity – or distortion, in other words – is a gradual process, with no clear-cut line between its linear response phase (if, indeed, it has any form of linearity) and the ‘undesirable’ non-linearity. As a result, small amounts of distortion will creep into the equation even at relatively modest levels, although if the input is being driven hard, there’s still a degree of musicality to the output, despite a more audible amount of distortion.

As no two analogue designs are the same, each different signal processor or recorder will have its own unique non-linearity – whether it’s an old valve preamp, a Studer reel-to-reel recorder or the solid-state electronics of an SSL or Neve console. The precise differences will manifest themselves as a unique colour and response to the distortion, although, as we’re talking ‘studio-quality’ here, this distortion shouldn’t result in a notable degradation of the sound, just a change in feel or timbre. The precise shift in timbre is created by the generation of new harmonics, effectively formed as the waveform is re-shaped (or distorted) by the device’s non-linearity.

A sum of parts

With an understanding of non-linearity and harmonic distortion under our belts, we can now start to see how this has shaped current studio practice and, in particular, the inclusion of analogue circuitry and processing into our workflow. Even with an abundance of ‘in-the-box’ processing, many engineers still choose to run one or more signals out to an analogue signal processor (usually a compressor) to provide a touch of analogue magic. For example, in the case of a buss compressor strapped across the main outputs from a DAW, it’s arguably the device’s non-linearity as much as its ability to compress that’s adding a unique flavour and body to the mix.

Going a stage further, there are plenty of engineers still mixing through an analogue console or using an outboard mixer to sum the mix to its two-channel form. The console-led approach illustrates what many people have come to understand about analogue warmth, in that it’s a sum of many different parts – or non-linearities – rather than a single magic bullet. In the case of the console’s electronics, each channel contributes it own non-linearity to the signal, which is summed to a buss that adds yet another layer of non-linearity and distortion.

In theory, therefore, by summing a mix using multiple channels (rather than just a single layer of distortion on the master buss) we can negate a large amount of intermodulate distortion and ensure that the majority of what we add is small amounts of modulate distortion. This also explains why recent plug-ins such as Pro Tools’ HEAT or Universal Audio’s Studer A800 both adopt an approach whereby multiple channels are ‘saturated’ rather than just a few inserts. When solo’ed out, the contribution from a single channel may be negligible, but the combined effect is often far more substantial.

Reel-to-reel recorders, of course, are infinitely more complicated beasts than just analogue electronics, given the additional non-linearity and peculiarities of tape. As well as the aforementioned addition of odd-ordered harmonics, tape is also well-known for its inability to work with sharp transients. From a technical standpoint, these transient issues are undesirable, but from a musical perspective, the ability that tape has to ‘smash transients’ (especially when its input levels are pushed hard) actually offers the engineer a tool with which to shape and refine transient activity, effectively reducing peak levels and increasing overall loudness. As a result, many engineers will often track drums and bass to tape before transferring it to a DAW for further work. 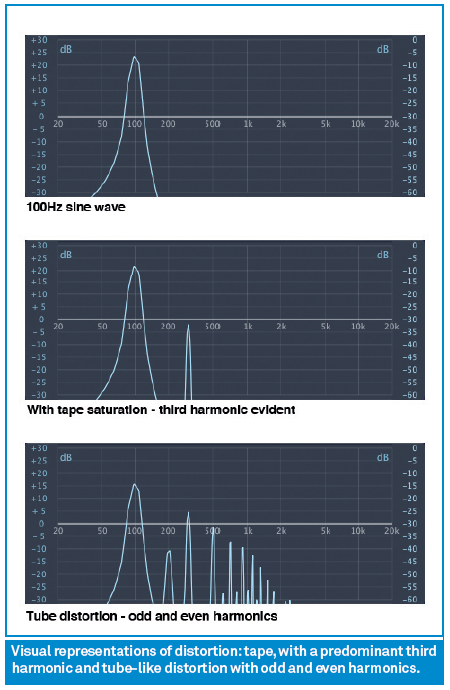 As well as additional saturation and distortion, tape also contains plenty of other sonic traits that have a big effect on the output, including recording and repro equalisation and head bump. Recording and repro equalisation involved equalising a signal to tape and back off again to negate the natural HF loss that occurs when a signal is printed to tape. Likewise, ‘head bump’ is a product of the less-than-flat frequency response of tape combined with the differing affects of tape speed (in others words, whether the machine is running at 7.5IPS, 15IPS or 30IPS). At slower speeds, a subtle bass boost is evident, which many engineers actively use as means of adding low-end weight to kick drums or bass guitars.

Even when using a perfectly aligned and maintained tape machine, it’s unlikely that what comes back from tape is entirely the same as the input. However, technically imperfect qualities like tape saturation and head bump can be actively used to improve our musical appreciation of a piece of music – adding loudness, natural compression and extra harmonic body to create a larger-than-life sound. Equally, a multitrack tape machine also subscribes to the ‘multiple non-linearities’ principle outlined above, so that the sum of 24 tracks of distortion is greater than the individual parts.

Old-school engineers who tirelessly struggled to work around the sonic imperfections of analogue technology will undoubtedly be amused by the current breed of new engineers returning to these tools of yesteryear. Technical advances give us greater control, but it’s important to lend a critical ear to the results. In truth, tape, valves and vintage consoles aren’t universal panaceas for all our sonic woes (in short, not everything benefits from being recorded to tape), but, if used selectively, they can add a musicality that is often impossible to achieve when working solely in the digital domain. 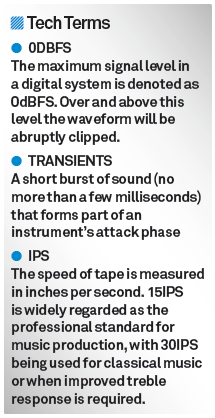