How to record guitar effectively in Studio One

Having gotten to grips with vocal recordings in last month’s Studio One tutorial, here we’re moving onto six-strings and attempting to pin down the many machinations that come with recording guitar. 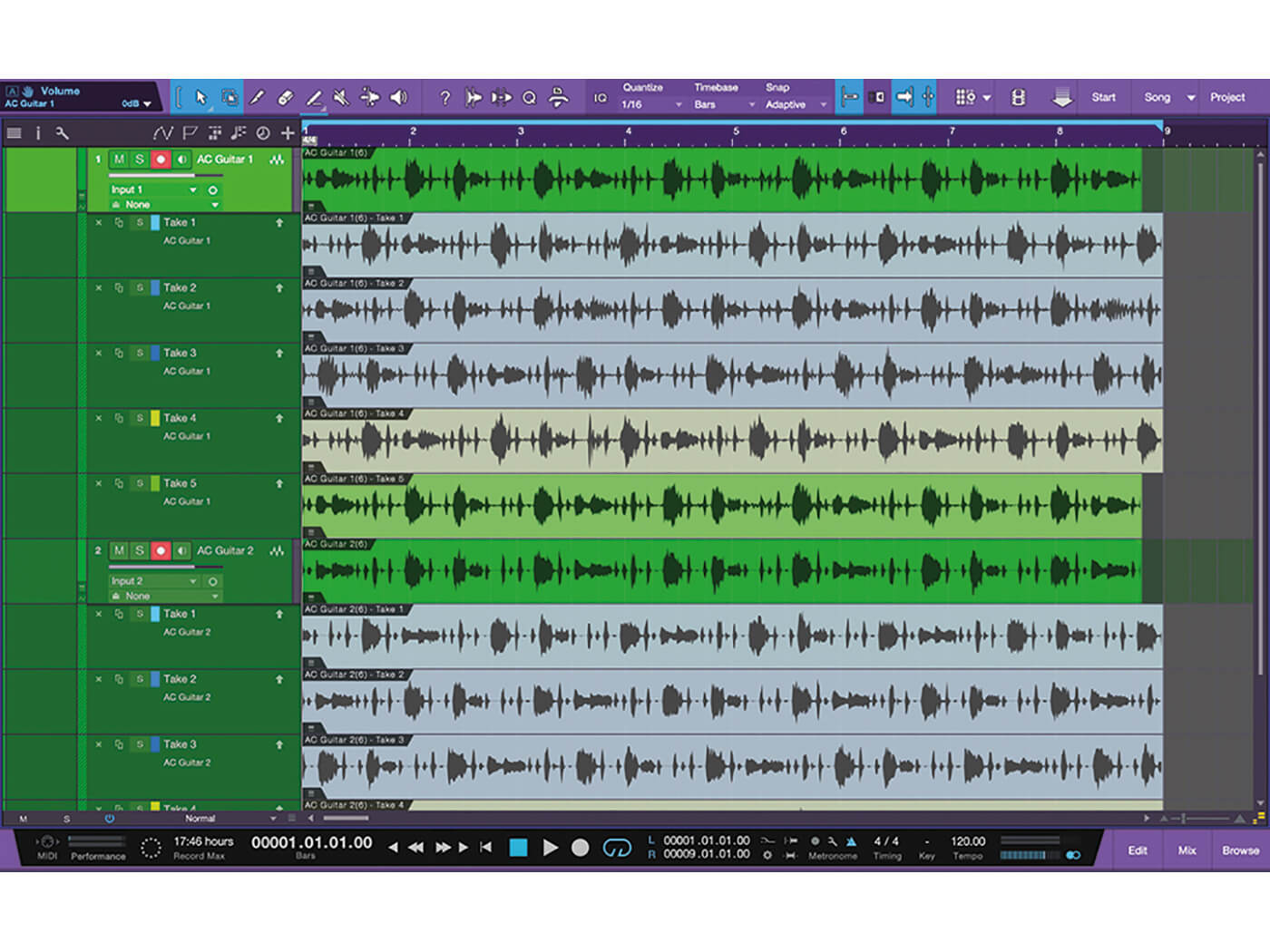 In our last Studio One tutorial, we examined the trials and tribulations involved in recording one of the world’s most notoriously slippery instruments: the human voice. Here, we move onto an instrument that, though easier to capture, brings with it many options and requires perhaps more thought and experimentation to get it just right for your track. We’re speaking, of course, about the humble guitar. There are many types of guitar and many more to capture it. So grab a plectrum, plug into your amp and get ready to strum – unless you want to play picked parts, fingerstyle, with an acoustic guitar. Like we said, there are many options.

The guitar comes in electric, acoustic and even hybrid varieties. Whatever its construction, when it comes to recording the instrument, we’re either capturing sound coming from its sound hole or from its pickups. Either way, there are a few basic guidelines that should help you achieve the best possible results regardless of the guitar you’re recording: use new strings, tune the guitar before recording, and allow the guitar’s temperature to level.

Avoiding worn strings should help you sidestep dull and lifeless sounds that can ruin otherwise excellent performances, so it’s smart to swap strings prior to recording. It may seem like an inconvenience but, trust us, changing strings now takes up a lot less time than trying to fix issues in the mix later on. You’ll thank us later. You may want to bed the new strings in for a few hours before recording, though, to avoid that tinny new-string sound. Spend some time warming up the new strings with some repetitive playing.

After the strings are set, it’s vital to confirm that the guitar is properly in tune using a chromatic tuner. This may sound like a no-brainer but you’d be surprised how many budding recording engineers – especially non-guitarists – record guitars without making sure the instrument has been properly tuned to an accurate source and not just to itself. No amount of post-production tweaking will fix an out-of-tune guitar.

You should also give your guitar a chance to adapt to the recording room’s temperature. Guitars are susceptible to expansions and contractions when their construction materials are exposed to varying temperatures. If it’s 1°C outside and the guitar has been sitting in a car for a while, let it gradually warm up to the temperature of the recording environment before trying to capture it. The same is true if the guitar has been in the sweltering heat and the cooler studio has air conditioning. This should minimise tuning issues during recording and reduce the risk of long-term damage and fretbuzz.

If you’re capturing acoustic guitar, the best preparation (aside from completing the above steps) is to have the guitarist sit or stand where they’ll be during recording. It helps to mark the spot with gaffer tape to ensure the guitarist is always in roughly the same position.

If you’re going for a mono recording, we advise that you set up a large-diaphragm condenser microphone in front of the 12th fret of the guitar, about six to 12 inches from the strings. If the sound this yields is too bright, turn the mic towards the sound hole, which should add a little more low end to the sound. Similarly, if the initial sound is too boom-heavy, turn the mic away from the sound hole. Adjust until you’re satisfied with the tone.

For stereo recordings, try a large-diaphragm mic near the bridge and a small-diaphragm mic closer to the frets. If you only have a pair of large- or small-diaphragm mics, use both and experiment. Again, alter each mic’s position until you get the sound you’re after. Assign each of these mics to its own channel in Studio One and pan them left and right, respectively.

To record electric guitars, you’ll have to get entangled in a broader process. You can get gorgeous sounds through the use of personalised amp tones and effects pedal signal chains, and capture the whole thing with any combination of microphones facing the amplifier. It’s fine to capture dry guitar DI’d through your interface too, and build up the effects and tonal qualities later. Guitarists themselves, however, usually favour the former.

Let’s go down the traditional route. Set up (or have the guitarist set up) their rig – effects pedals and amp, etc – and for the tone they have in mind. Now select a few microphones. A dynamic mic placed three to six inches from the speaker is a sensible option. Position it at about the midway point between the amp’s outer edge and its speaker cone, and move it left or right to adjust the tone.

The closer the mic is to the centre of the speaker, the brighter the sound will be. For more tonal options, set up another mic – either a large-diaphragm condenser or a ribbon – on the opposite side of the speaker. Be careful though. Condenser and ribbon mics are much more sensitive than dynamic microphones and should be placed farther from the speaker.

Most ribbon microphones have a figure-eight pattern, which means they’ll pick up a considerable amount of room sound. If you have other instruments that are likely to bleed into the mic or if you need a tighter, more focused sound, ribbons may not be the best option. The same is true for omnidirectional condenser mics. It can help to listen closely to recordings you admire and use these as a springboard for achieving a similar sound. Remember, recording is subjective. If the end result sounds superb to you and the client, then it’s a job well done. 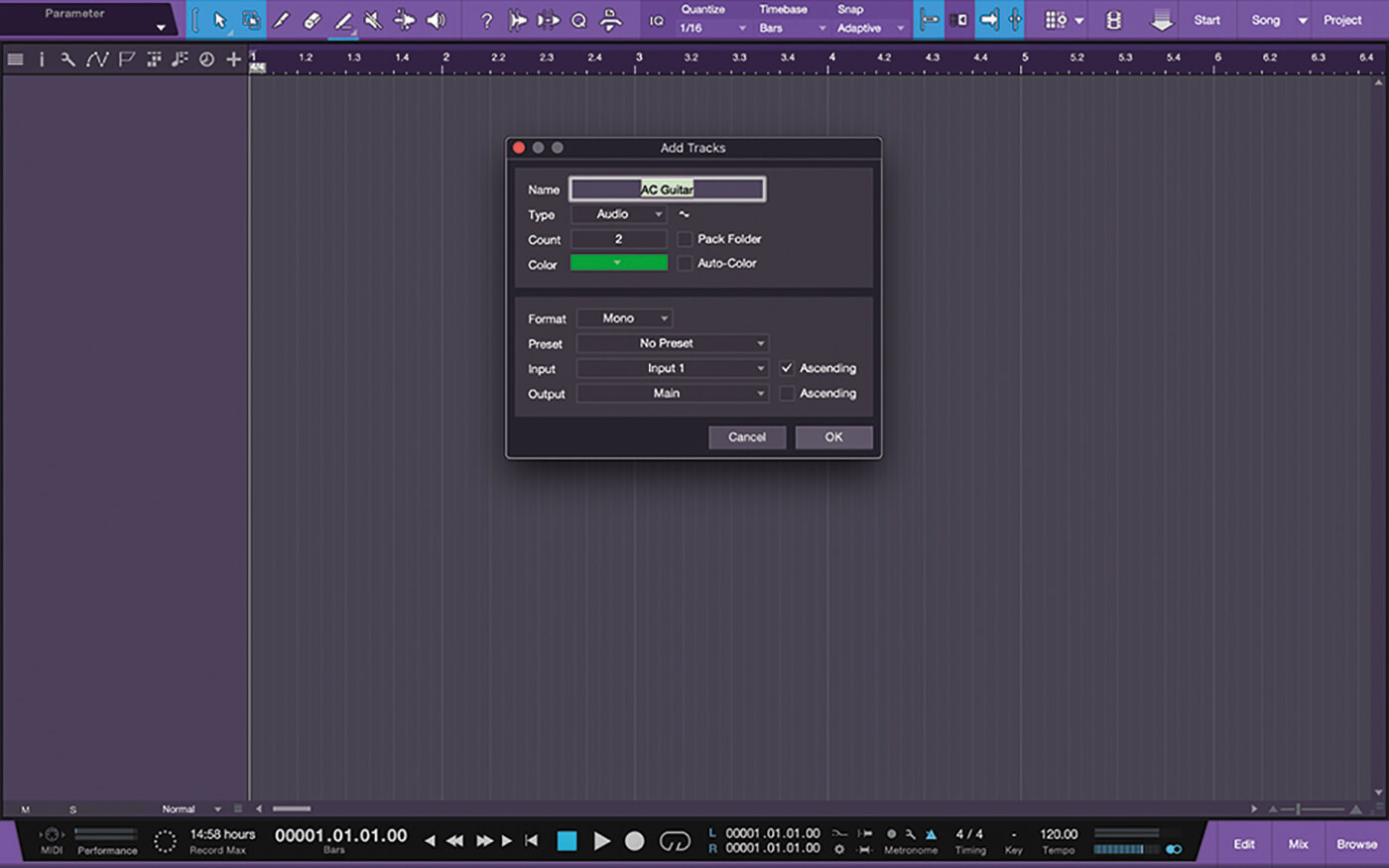 1. Open Studio One and press T to create a new audio track or a pair of audio tracks for stereo recordings. Name the tracks, assign colours, and add presets and inputs here too. 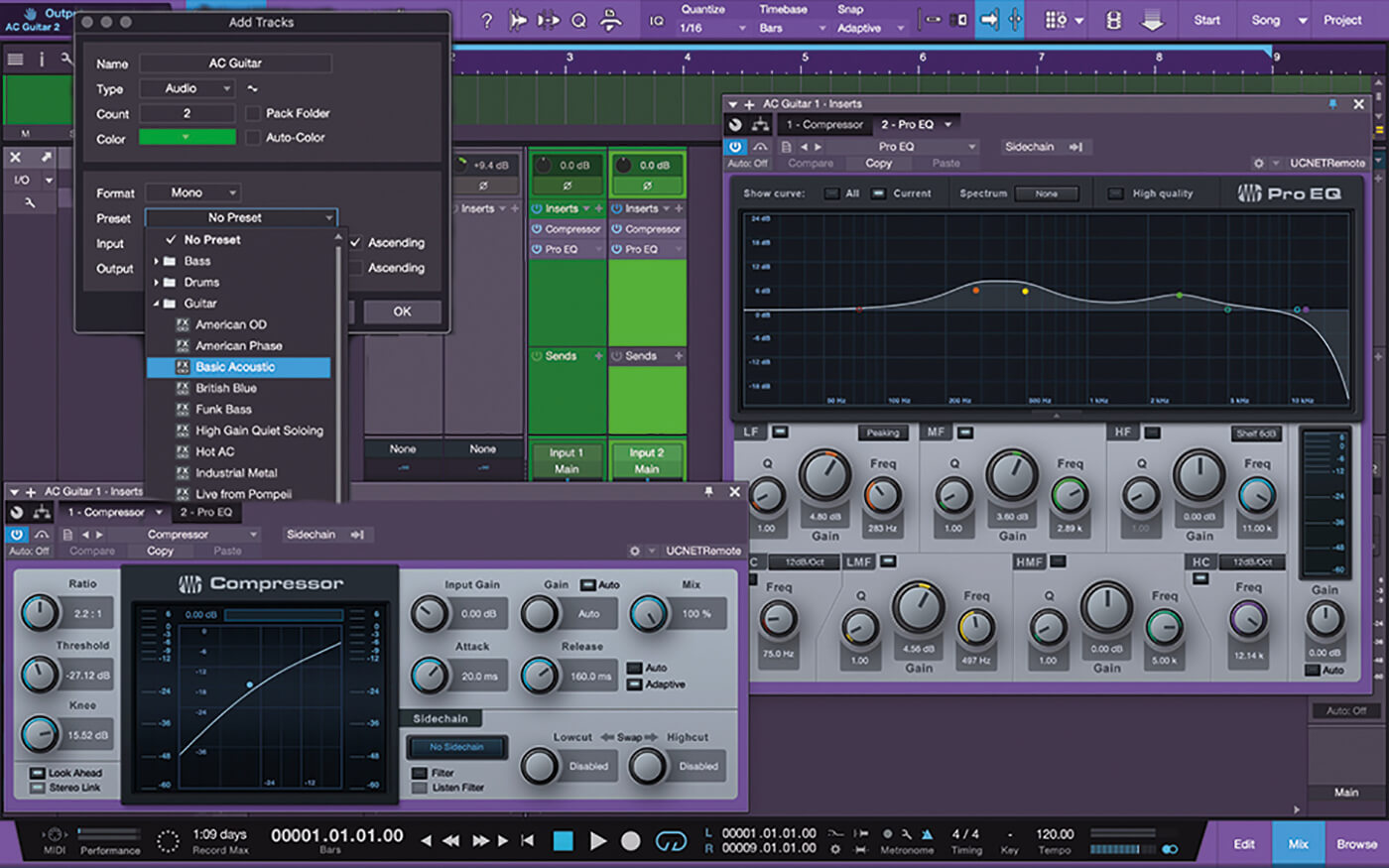 2. Studio One’s presets will go a long way towards helping you achieve your desired sound. Begin with the Acoustic Guitar preset. 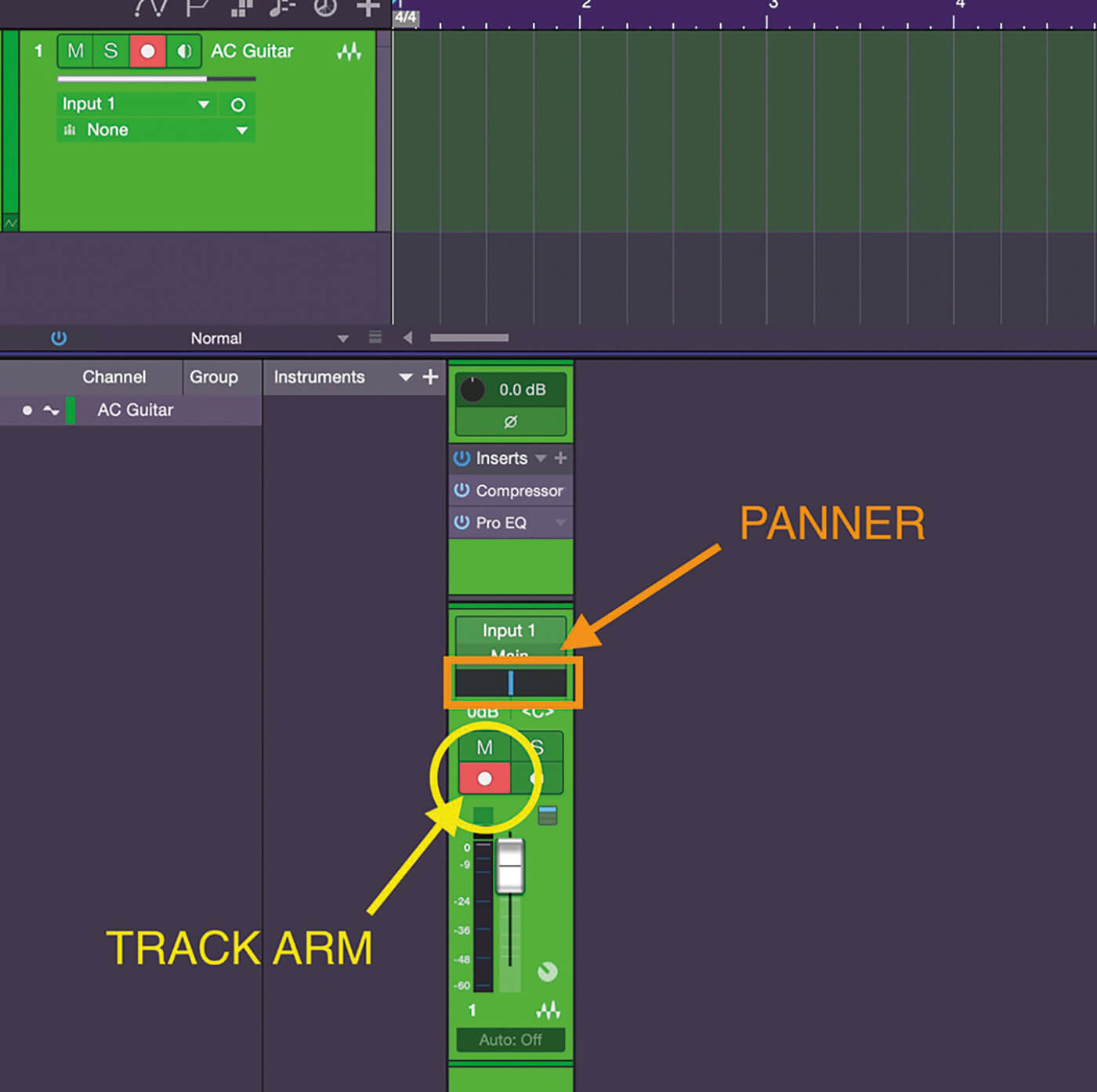 3. If recording using a single microphone, leave the track’s pan control in the centre and click the track-arm button to hear the input assigned to this track. 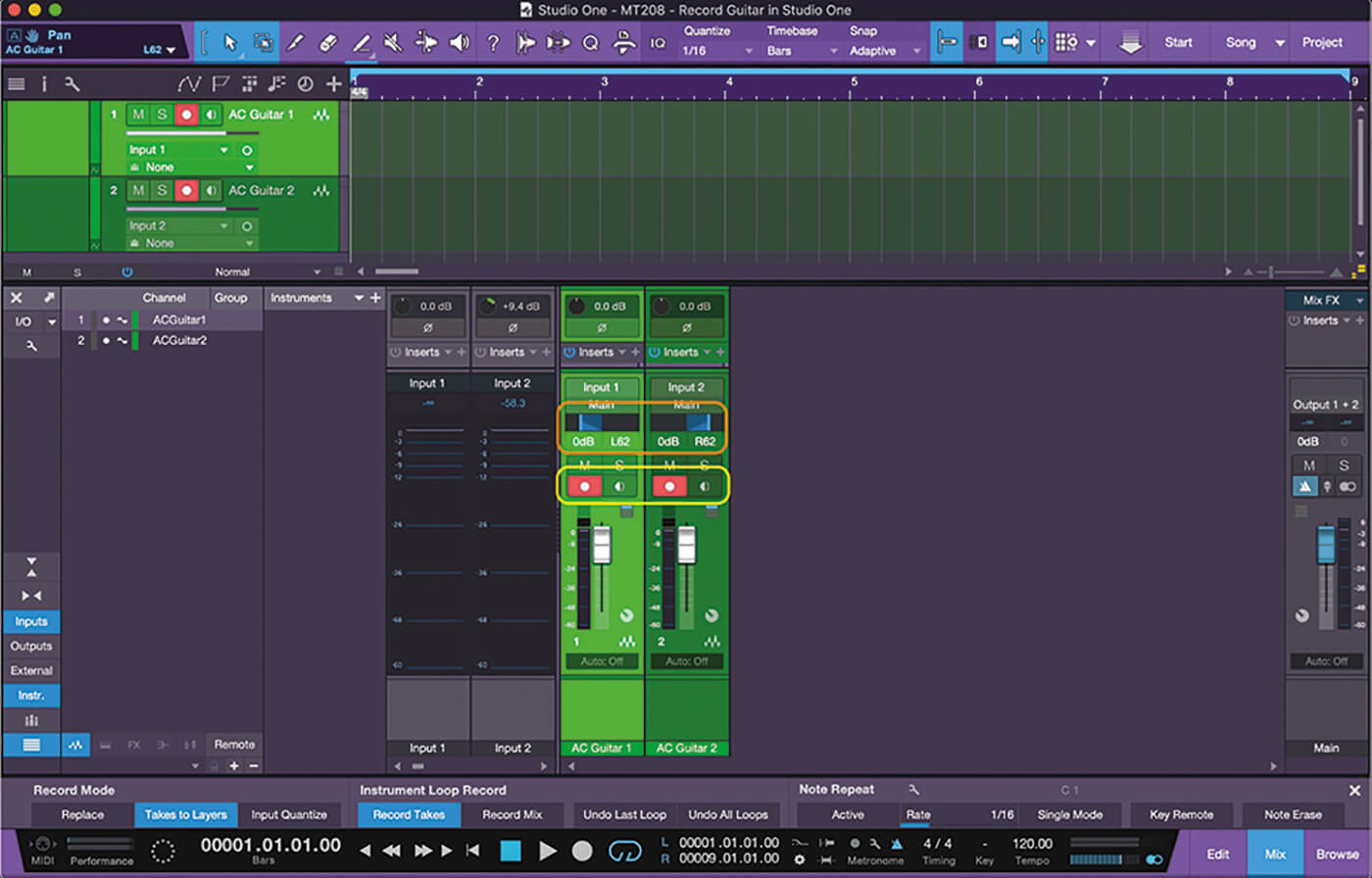 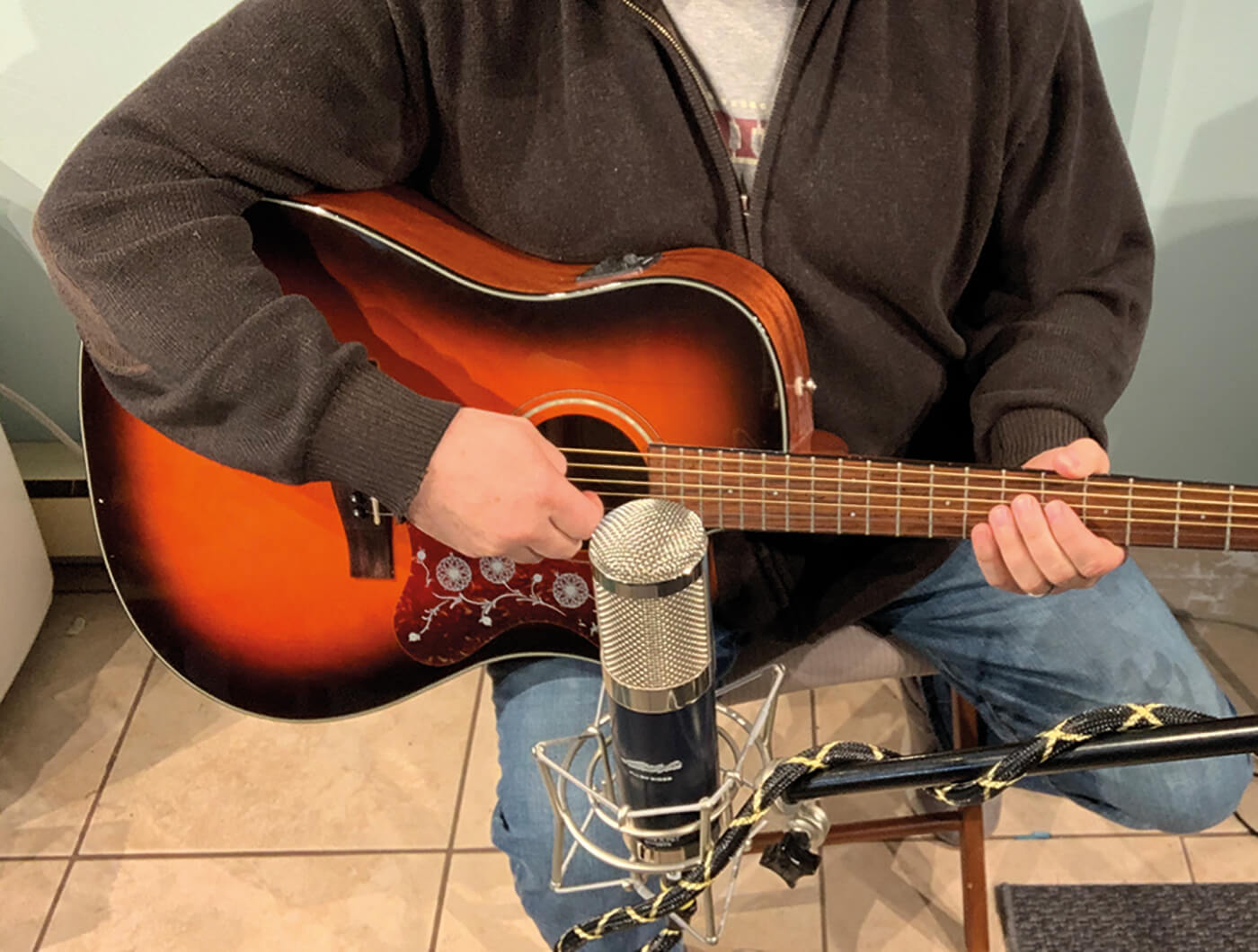 5. For mono recordings, start with a large diaphragm condenser about 6 to 12 inches from the 12th fret. Angle it very slightly toward the sound hole to capture a balanced sound. 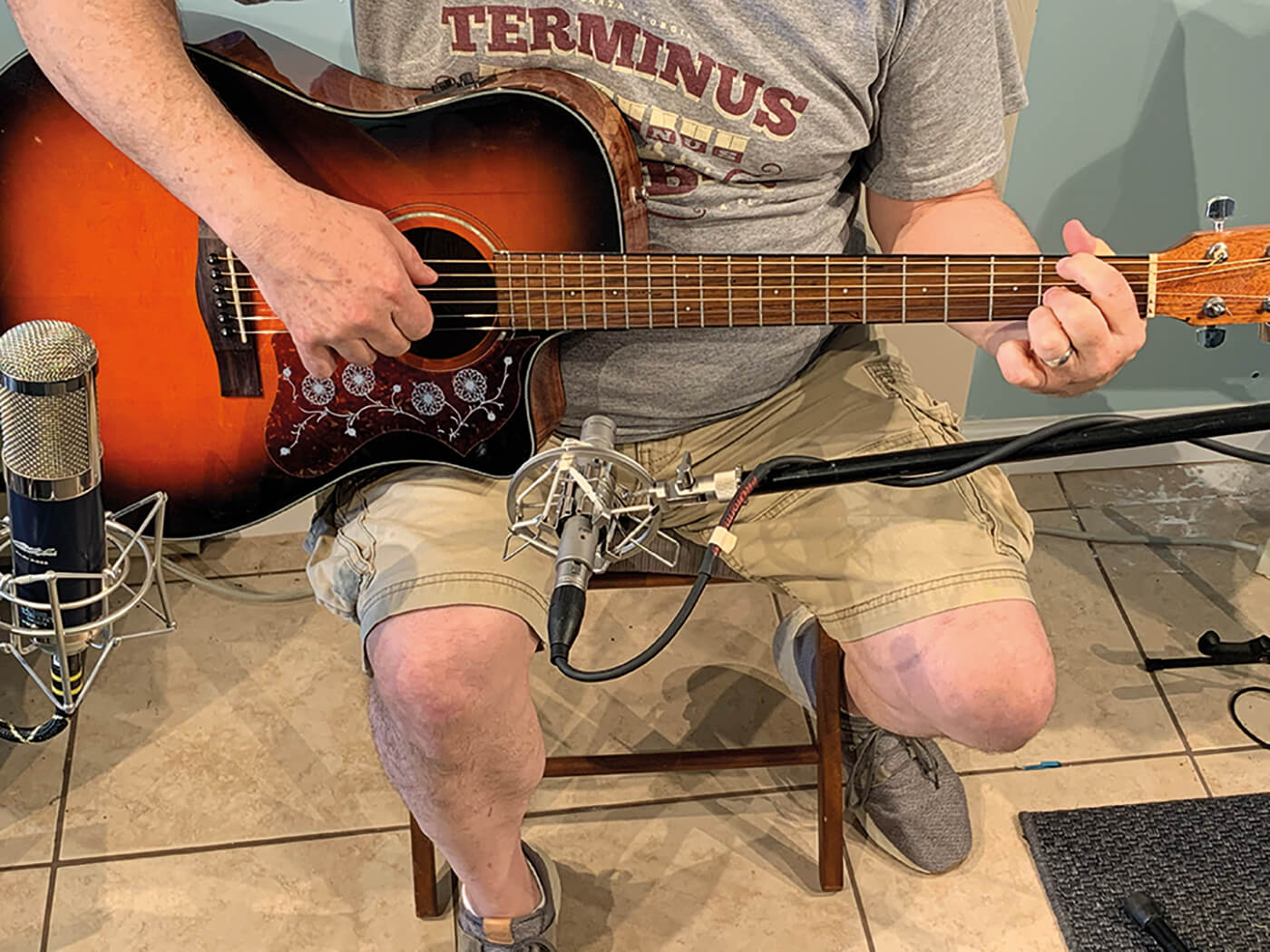 6. Place a small-diaphragm condenser about 6 to 12 inches from the 12th fret of the guitar. Make sure both mics are the same distance from the strings to minimise phase issues.

ACOUSTIC ALCHEMY There are no hard and fast rules when it comes to recording acoustic guitars. Acoustic-electric guitars can be recorded with microphones or directly from the guitar’s output jack. This, in fact, gives you more flexibility when it comes to blending tones. You may even employ different mics and recording techniques for different sections of a song. 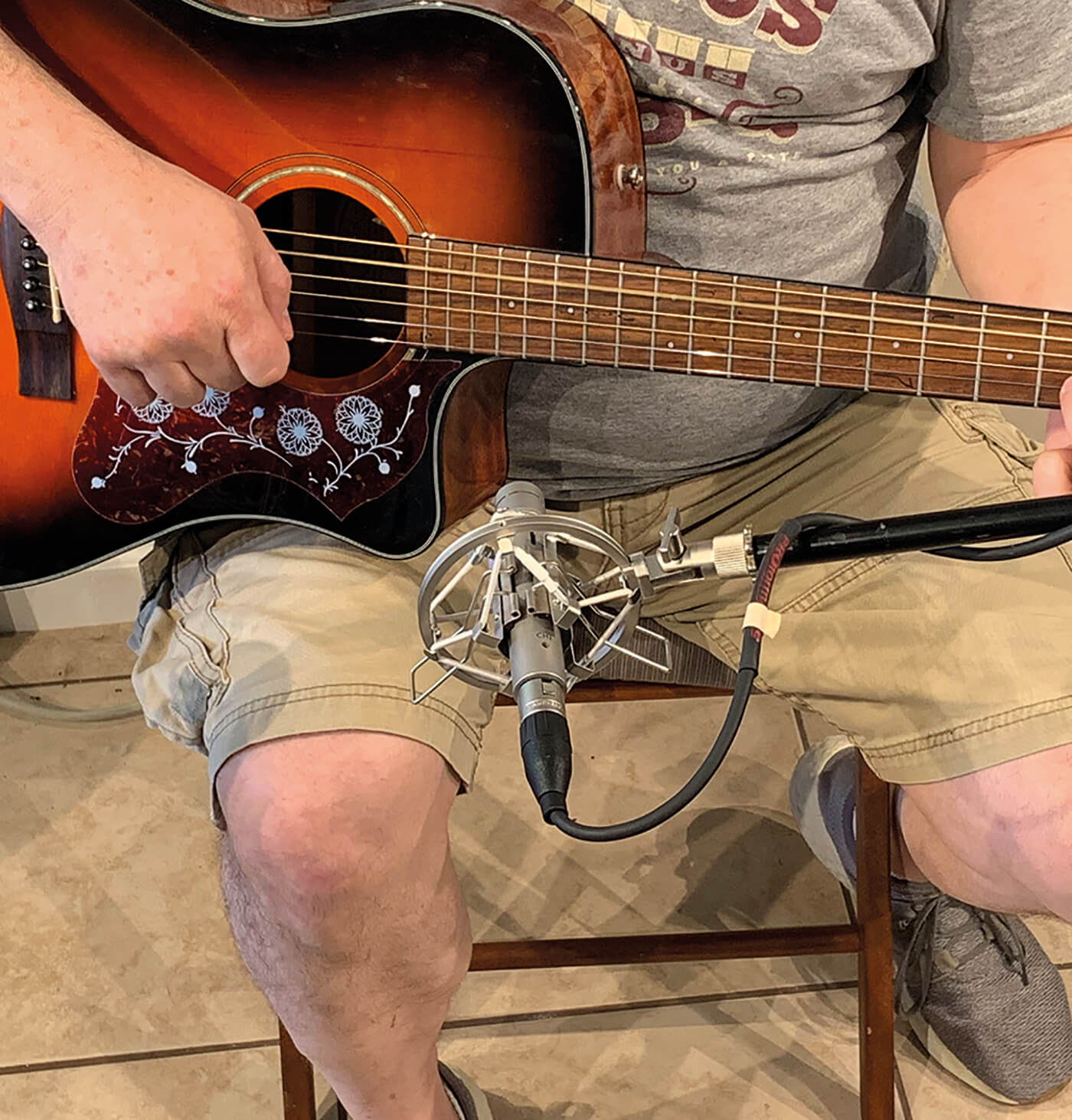 7. For stereo recordings, place a large-diaphragm condenser microphone six to 12 inches from the bridge of the guitar, aimed just below the sound hole. Don’t worry about adjusting until the other mic is up. 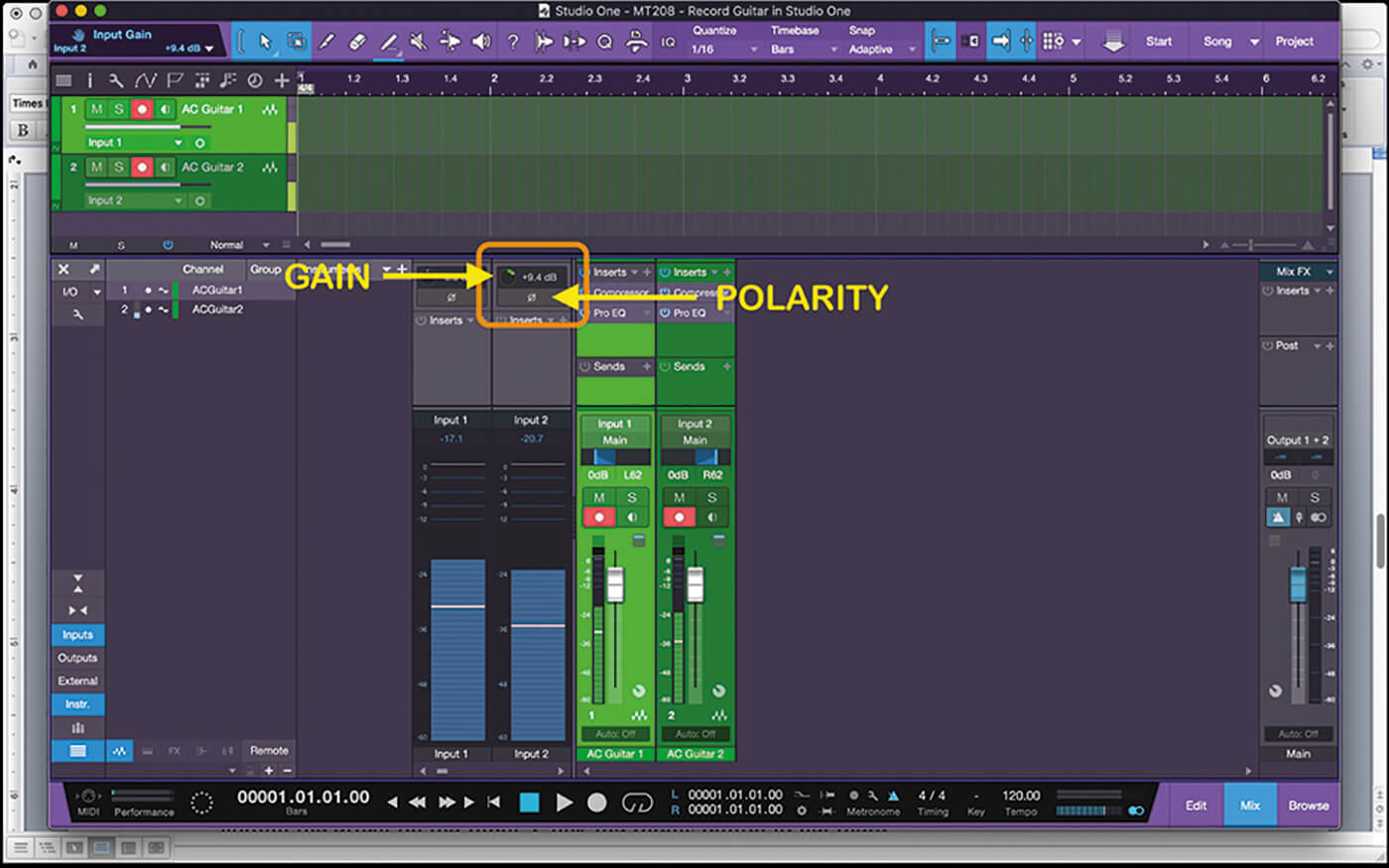 8. Adjust the gain for each track until there’s a nice balance between the left and right microphones. If the sound is thin, click the Polarity on one of the tracks. Better? Worse? 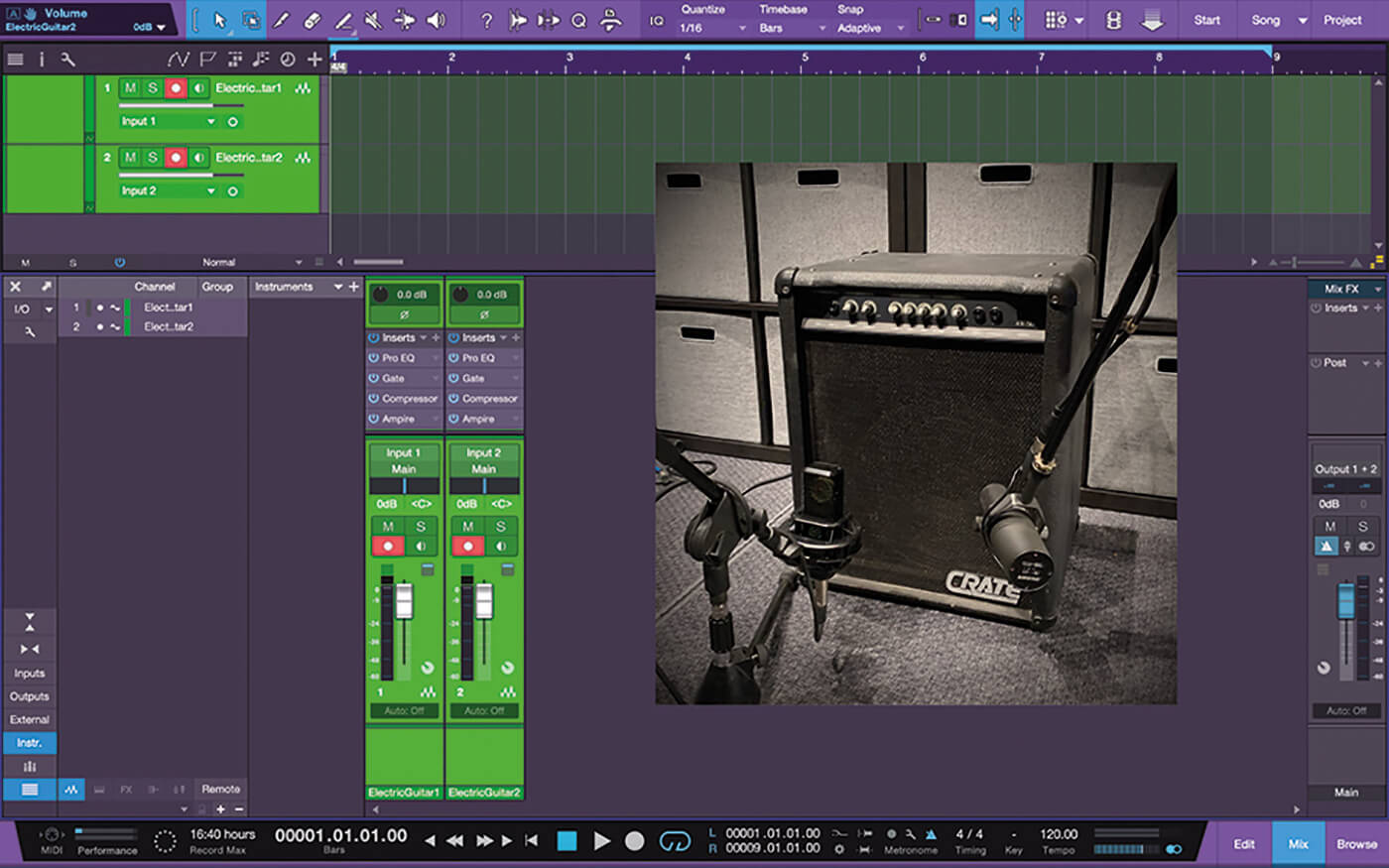 9. If you’re recording an electric guitar, go through the same procedure, except set up the mic or mics to record the amplifier instead of the guitar itself. 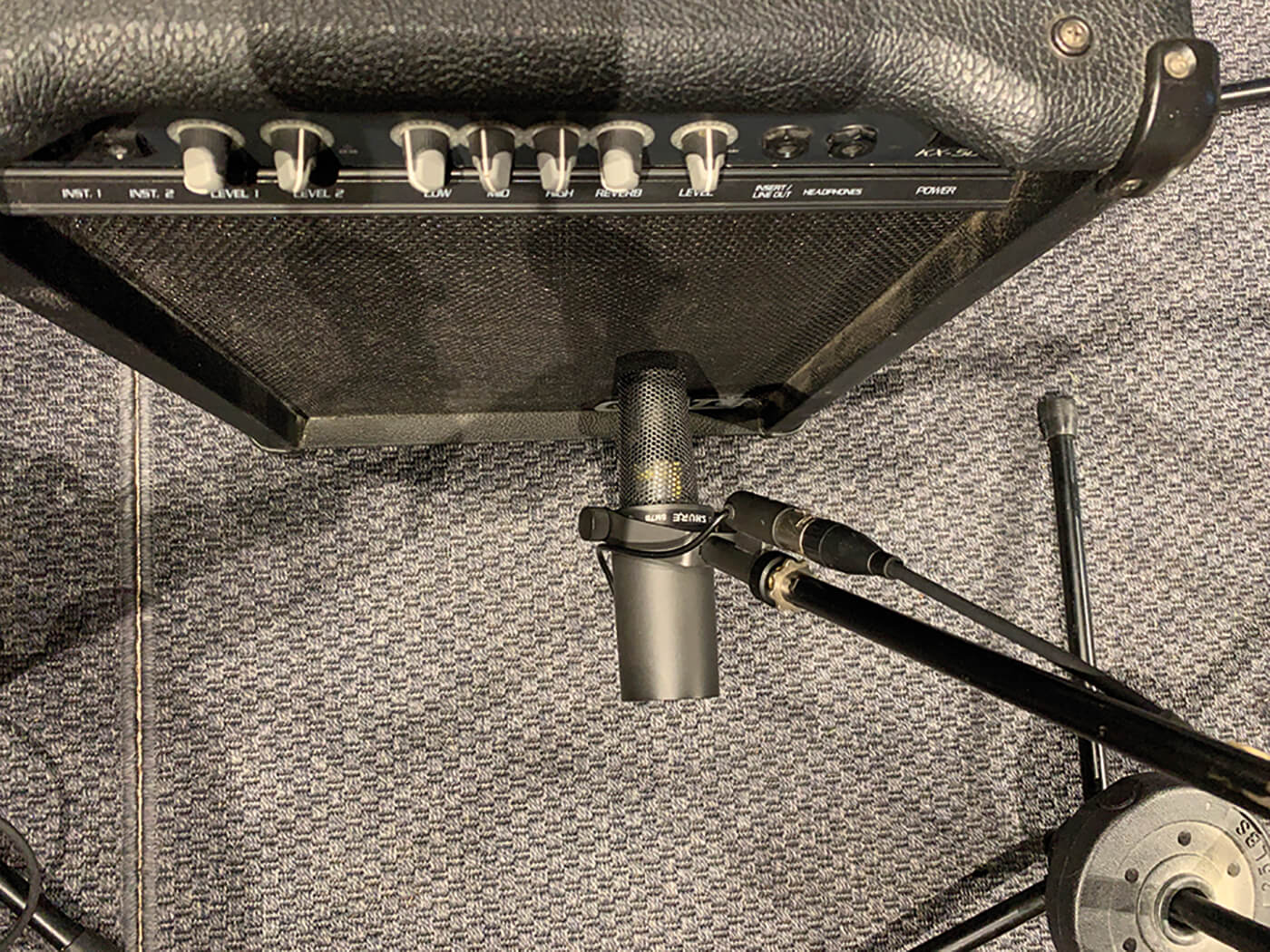 10. Set up the first microphone midway between the cone and the outer edge of the speaker. Click the record button in Studio One to monitor the microphone. 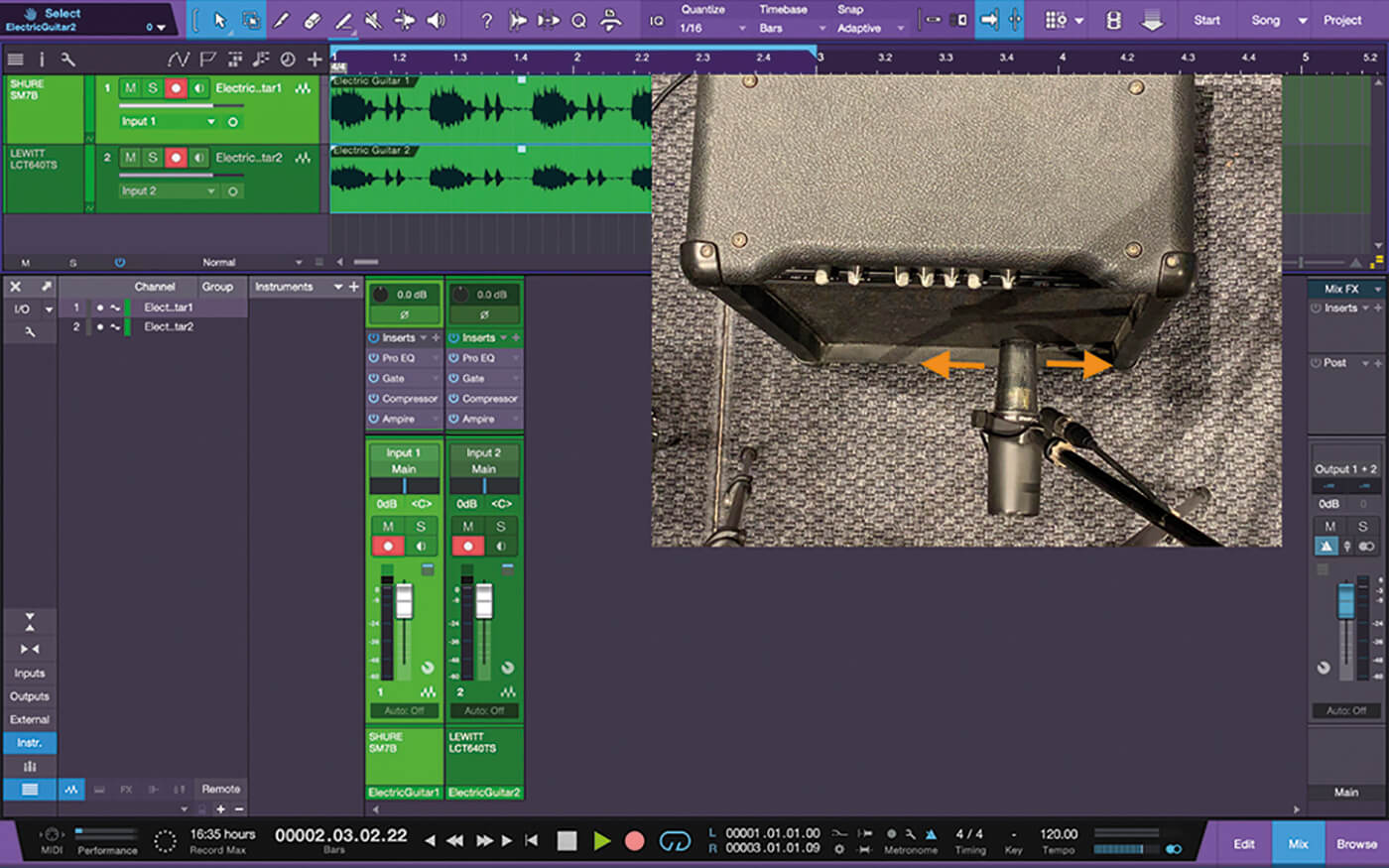 11. Have the guitarist play the parts that are to be recorded. Move the microphone closer to or farther from the cone of the speaker until you’ve got a satisfactory tone. 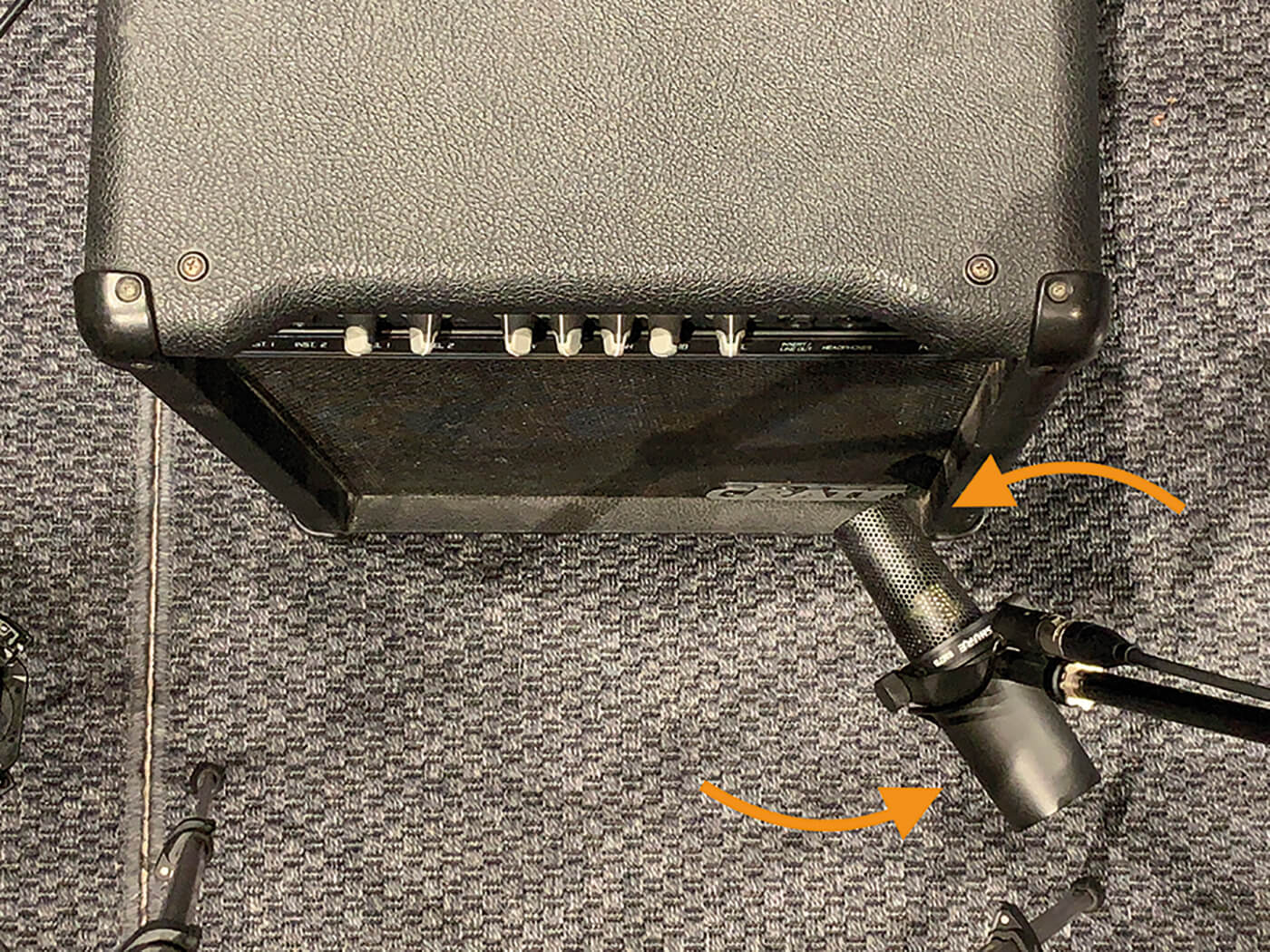 12. Adjusting the axis of the microphone will give you further tonal options when recording the amplifier.

ELECTRIC AVENUE If you have the flexibility of trying different electric guitars, take advantage of it. Different guitars can change the feel of a track. A guitar with dual humbucker pickups will sound very different to the same guitar with a single-coil pickup. Solidbodies don’t sound the same as semi-hollow instruments either. Listen and see what works best for the song. 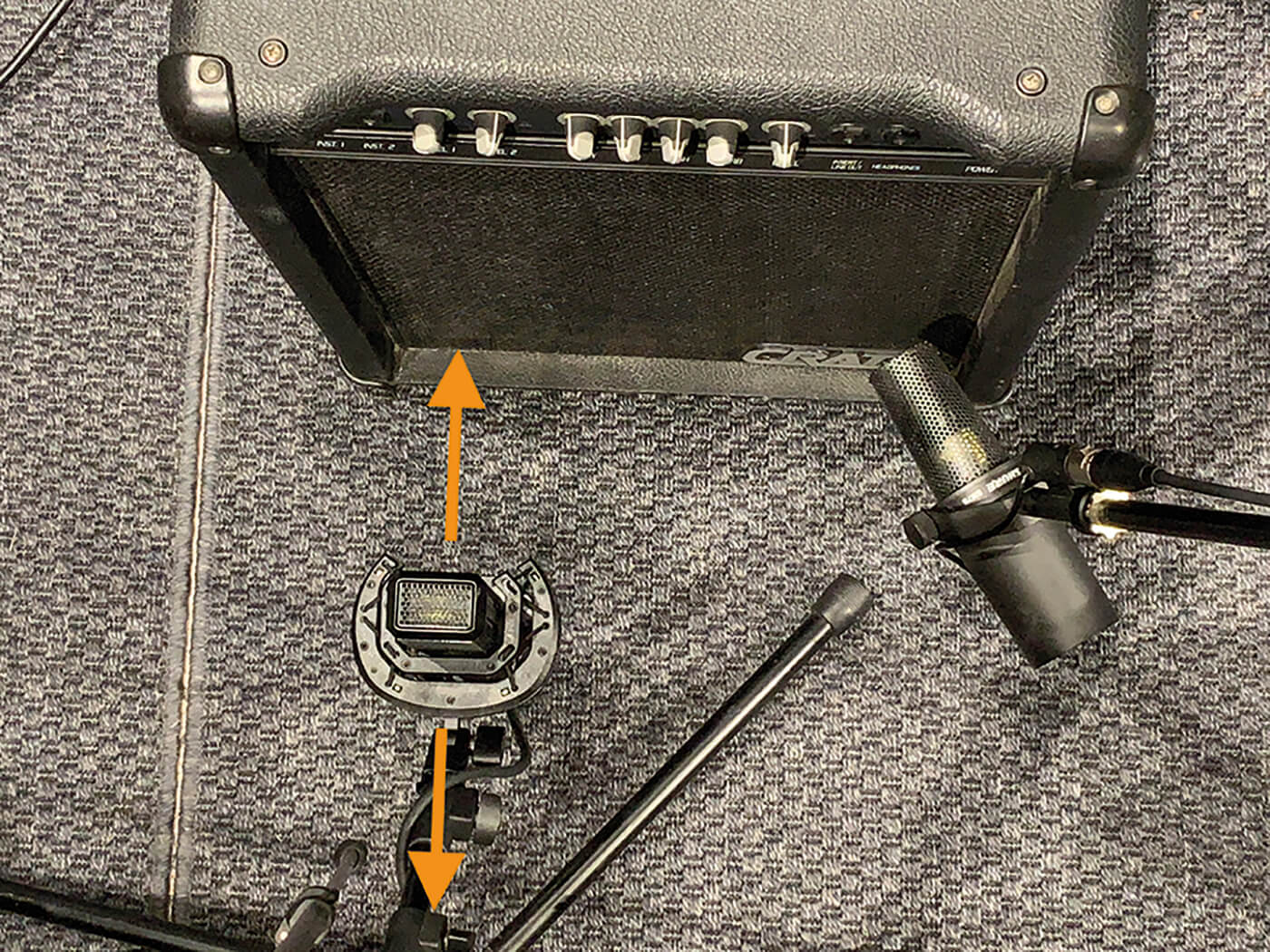 13. Add a large-diaphragm condenser mic and assign it to a track in Studio One. Experiment with the mic’s position, moving it farther away for a more open sound. 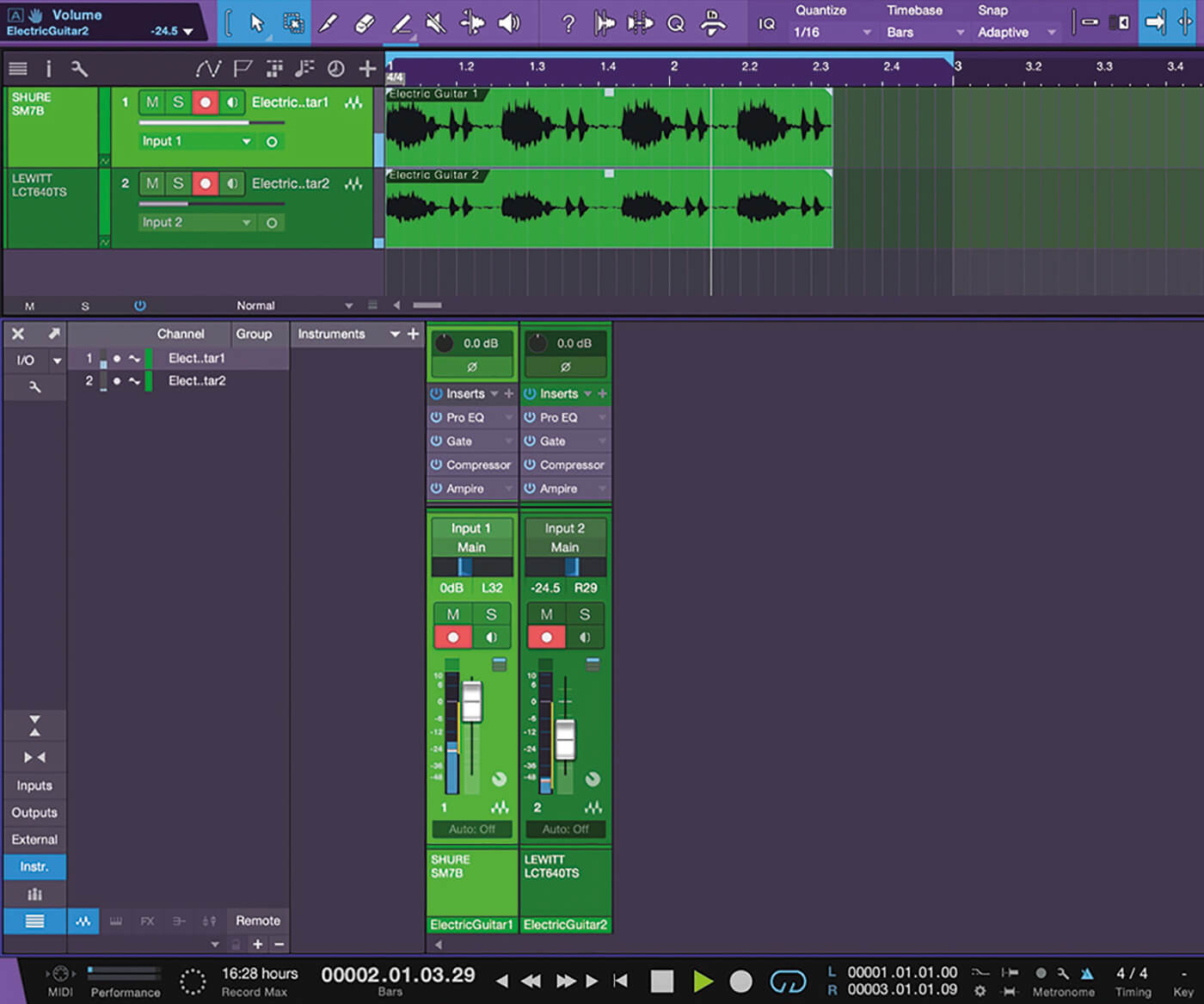 14. Try blending the two microphones in Studio One and explore all the tonal options you can achieve with this technique. 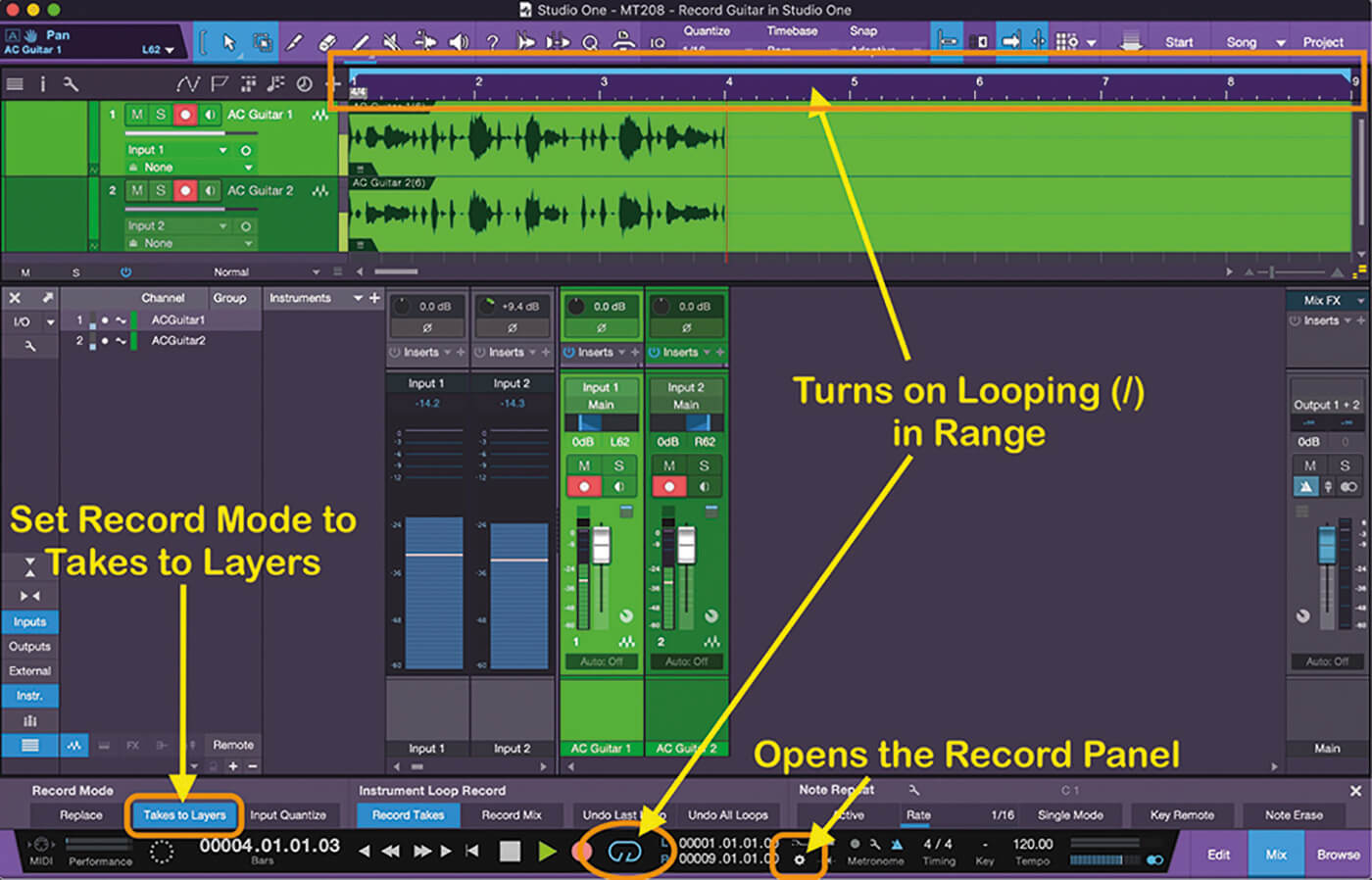 15. To get several takes of the guitar part, set up a loop of the correct length and open the Record Panel. Make sure to set Takes to Layers in the record mode. 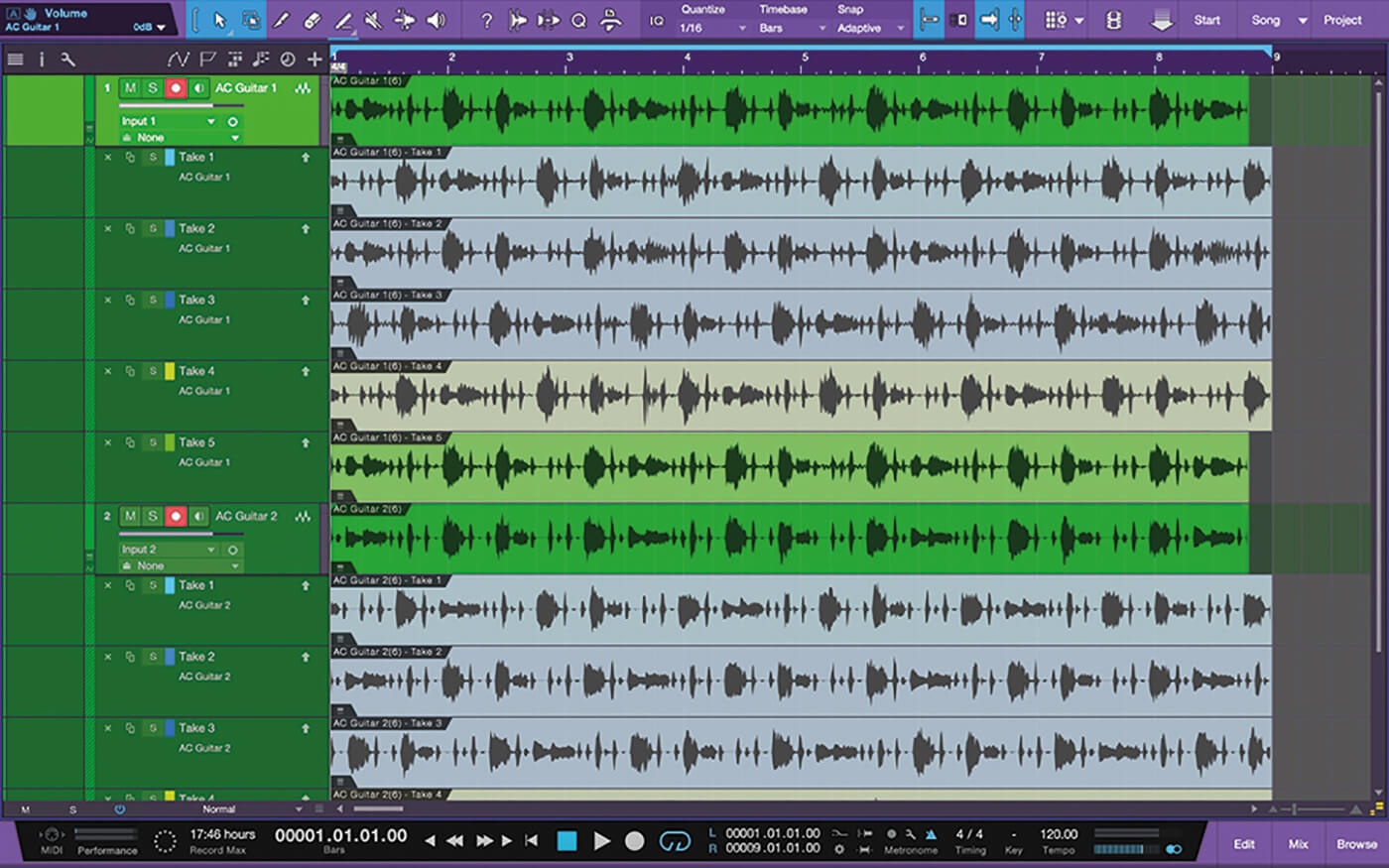 16. Hit record and play through the track (or loop) as many times as needed. Hitting stop will open the layers and allow you to choose or comp together the perfect take. 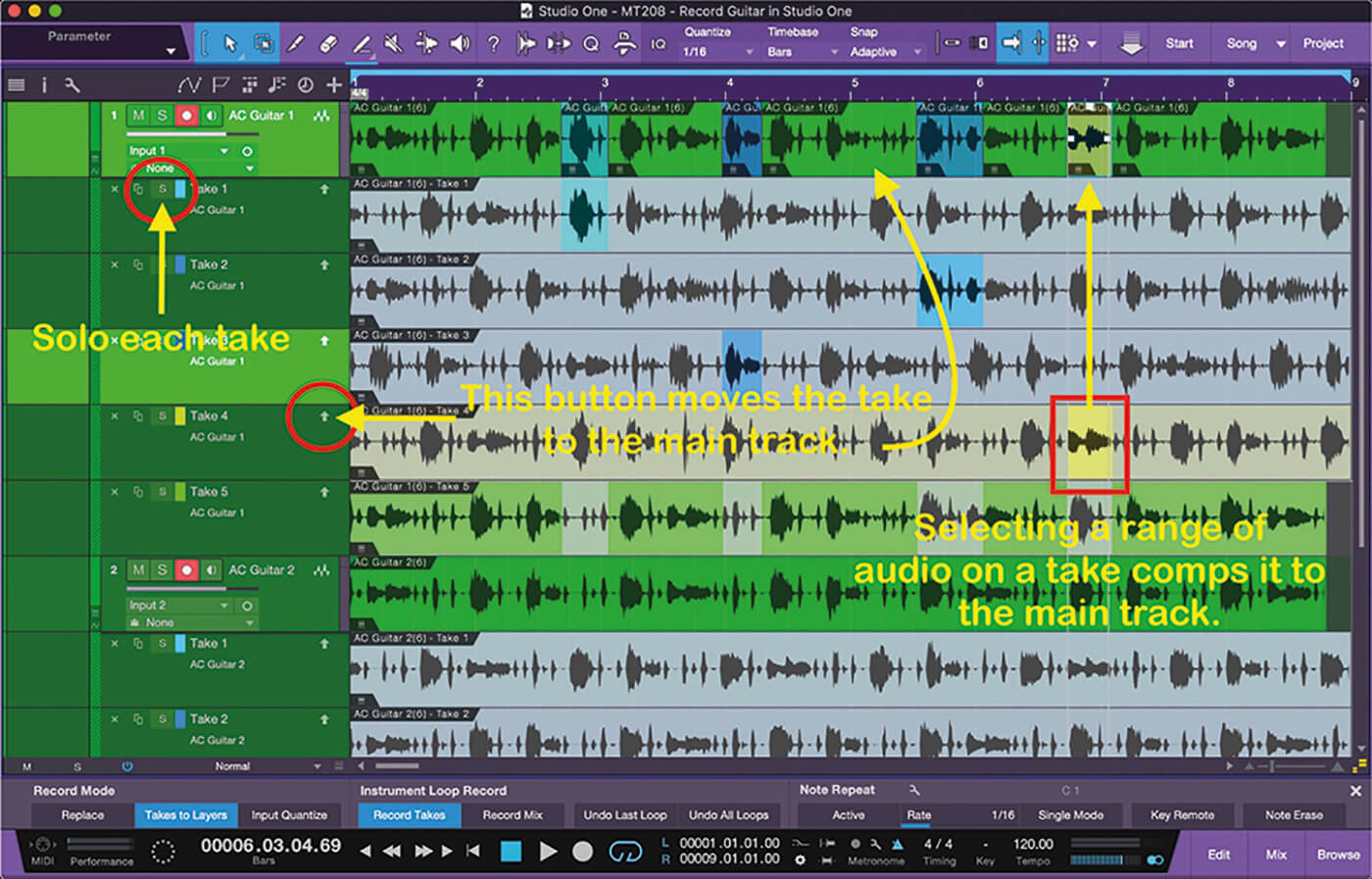 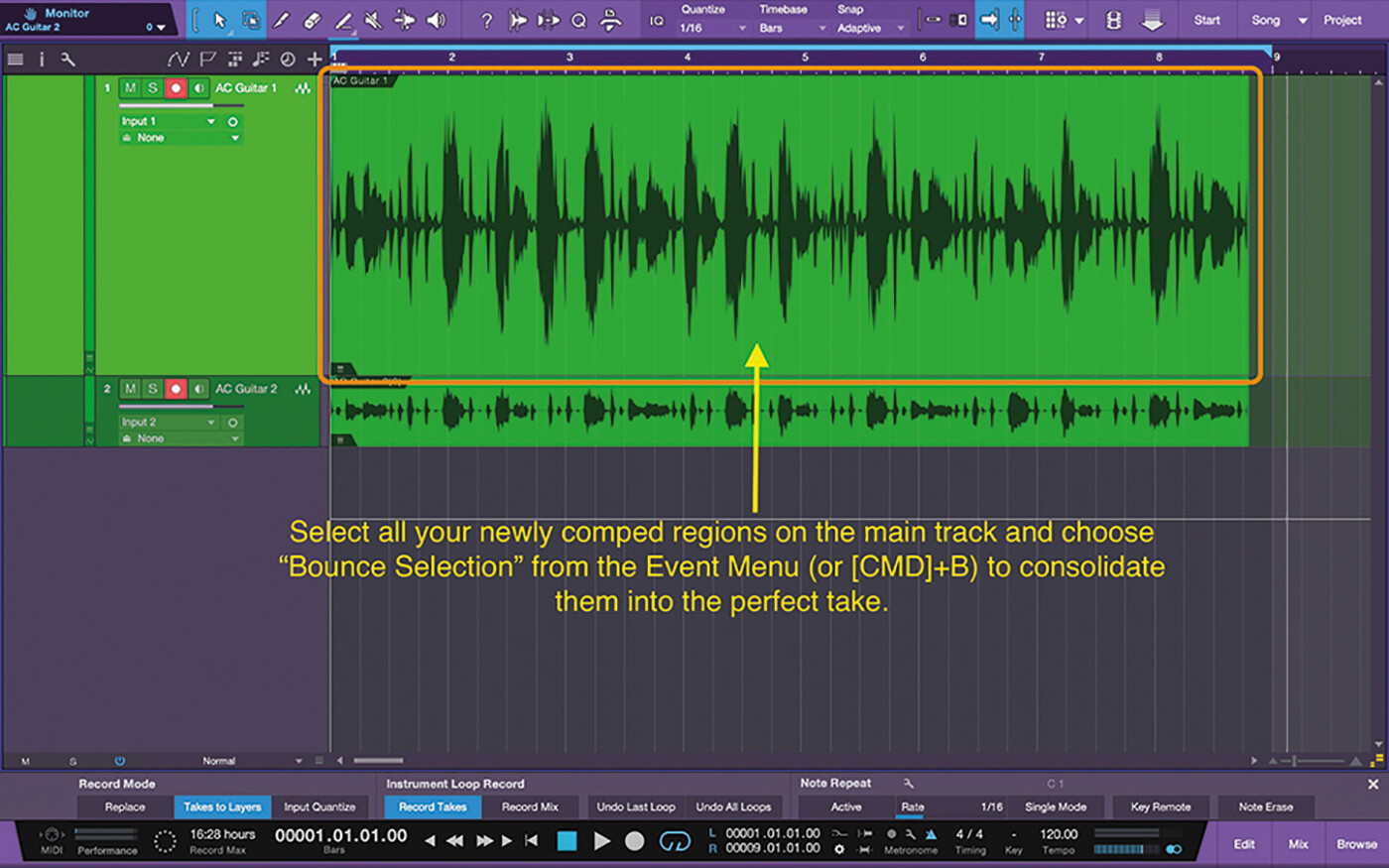 18. Once you’ve comped together the perfect performance, select all the parts on the main track and hit Cmd+B to bounce them all to a new consolidated part. Now you have a complete separate take ready for post-production.