In seven steps, the Norwegian trance producer shows us how he combines sounds to create an evolving bass tone. 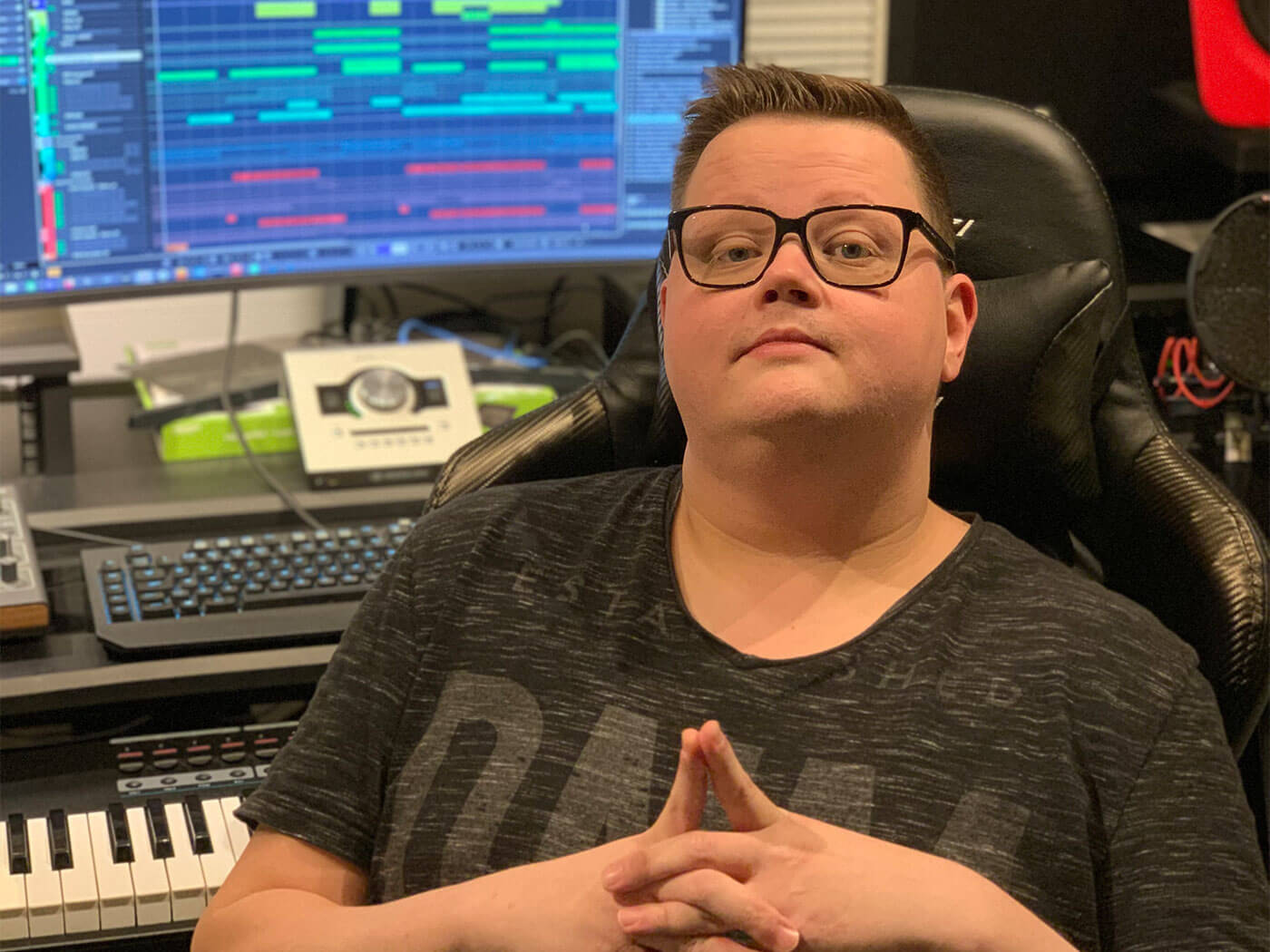 Ørjan Nilsen has been working on his craft since the late 90s, so it’s no wonder he is regularly found among DJ Mag’s Top 100 listings, amassed millions of Spotify streams and worked with some of the biggest names in trance music.

In this walkthrough tutorial, Ørjan shows us how he effectively creates and combines bass tones, using just a couple tracks and some nifty modulation. 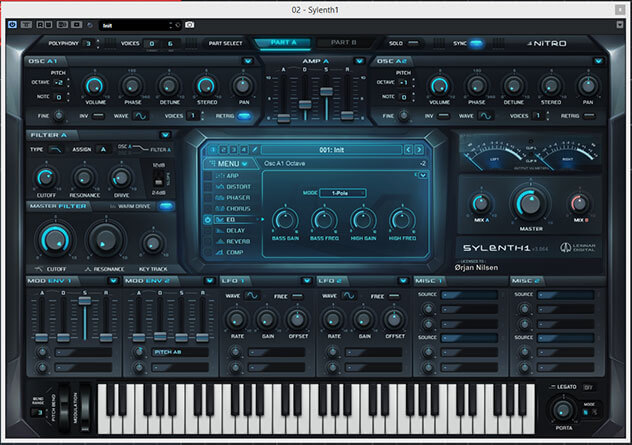 First, let’s find a synth – I’ve chosen Sylenth for this one, but you can use your preferred software or hardware synth here. Now, from the oscillator section select a sine wave, then adjust the pitch envelope on it. What you want to do here is add a little bit of envelope on the plus side on the pitch envelope. On Sylenth, this is achieved by navigating through the modulation envelopes and selecting ‘Pitch AB’ – this will create an envelope that will affect the pitch of both oscillator sections A and B.

The only fader to change right now is the decay fader, because that one is going to instantly open up the envelope. Increase the decay a little bit until you hear a nice little ‘knock’ sound. If it’s too much then turn down the pitch envelope amount. 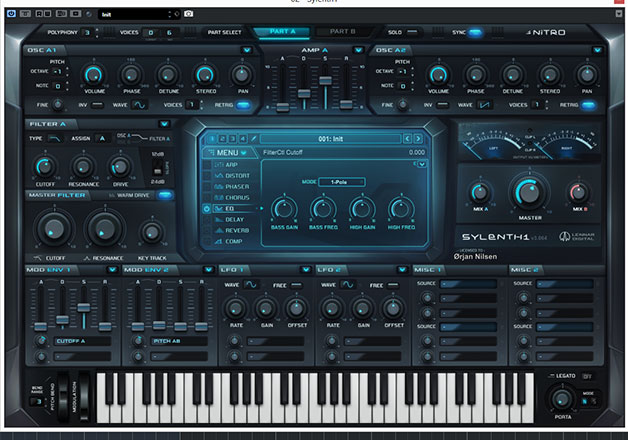 Now, do the same with the other modulation envelope, this time affecting ‘Cutoff AB’. At this point, I activate the EQ built into Sylenth itself because it actually has a pretty nice gain as soon as you switch it on. It gives it more of a rougher tone. I would also suggest adding some drive and pushing the warm drive button on Sylenth. It gives you a noticeable tone as you add some overdrive into the patch.

Now add another oscillator. Go to Osc A2 and select the saw wave, its harmonics give a little more grit than the sine wave in Osc A1. Make sure it’s in the same octave as Osc A1. Set the filter to low pass and bring it down until it sounds almost like an 808 drum bass – deep, but with a little punch passing through in the mid frequencies. 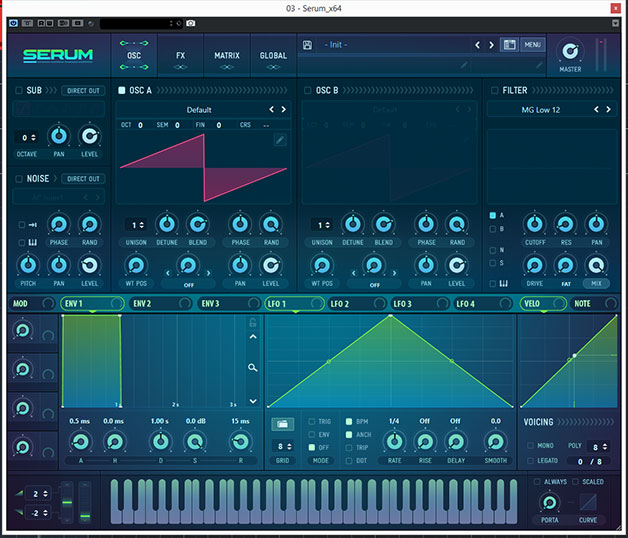 Now let’s move onto the mid-bass; I’m using Serum for this part. I would suggest, considering you already have a pretty nice sub-bass, to keep this mid-bass wider. It can be a mid and high bass all in one. As long as you make sure they do not conflict with each other in the lower end of the frequency spectrum.

I use one of Serum’s wavetables here called Monster, which starts off high and goes really deep. You can evolve the sound by modifying the wavetable position, this is where we can have some fun with the LFO. Right now we are going to make activate unison so it has two voices on the actual sound, and then we are going to take the Rand knob and put it all the way up, because this means stereo widening. You can do this with stereo widener plug-ins within your DAW, too. 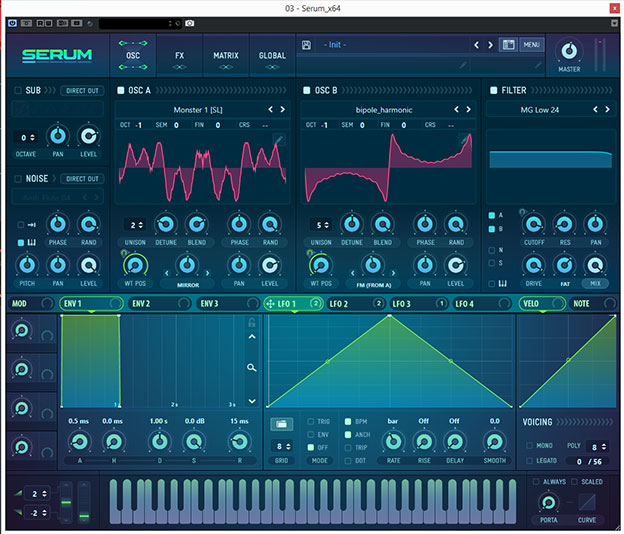 Now comes the modulation part. Let’s take one of the LFO’s and route it to the wavetable position. By doing this, we are modulating and morphing the wave throughout the whole wavetable at different speeds and with a rhythmical pattern to make it feel a little more alive and dirty. As soon as you’ve done that, you can change the waveshape and rate of the LFO to figure out which rhythmic pattern suits your track the most

Using LFO 2, put it on the same wavetable knob, but in a different pattern. You can get so many fun results by just playing around with those two things. 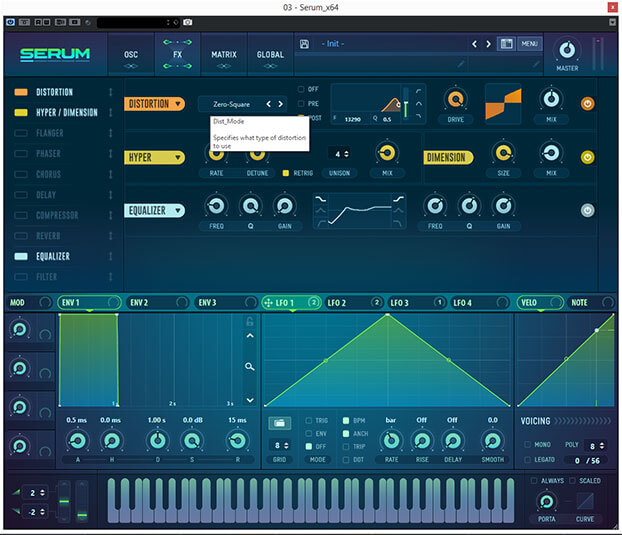 Right now I’m using all the stock effects inside of Serum. There are no third party effects here, but you can apply your own in whichever DAW you’re using. I’ve applied a post-fader distortion, which means the distortion happens after the sound has played. It’s wet/dry blend is at 50% with the drive all the way up. I’ve set the distortion so that it only affects the higher frequency range of the bass tone. That’s where I want it to do most of its damage. 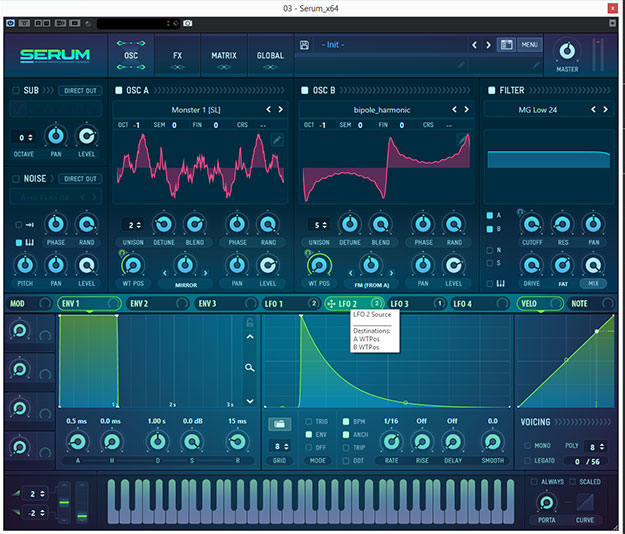 Now we are going to use the hyper/dimension effect in Serum to create a bit more of a spacious sound. On the dimension part, I’ve applied a huge size but kept the mix at about 15-20%. The hyper part acts as a de-tuner and thickens up the sound slightly. I’ve added four voices and I’ve told it to retrigger so it resets every time a note is played.

Now its EQ time – one of the most important parts of a high-mid bass. Simply, all you need to do is make sure the mid-bass doesn’t conflict with your sub-bass line that you have. I usually apply low-pass from 120 Hz. Once this is done, you should have a pretty slick mix that should work really well on the dance floor.

To make the sound a little more interesting, add a second oscillator. Set Serum’s unison on 5 voices and put the Rand on 4, making it feel really wide. Make sure you also route the LFO’s we already had on oscillator one to this one. 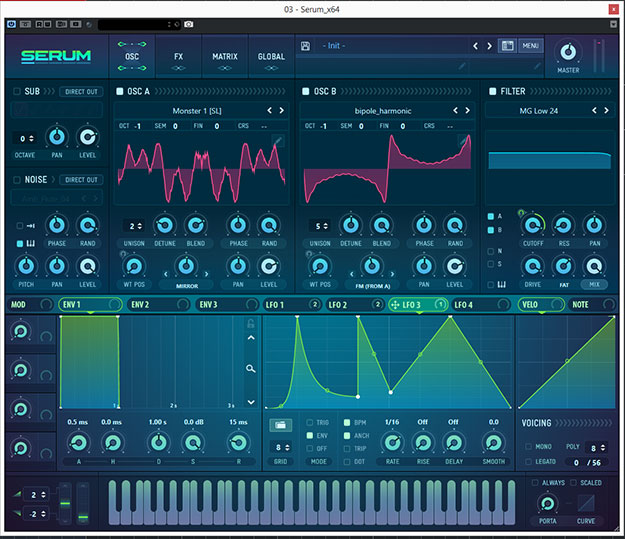 Now let’s have some fun with the filter. I’ve chosen the MG24 filter (low pass filter) and routed it to a third LFO to let it evolve a little bit. Now if you want to retrigger or keep the LFO on a constant, that’s up to you. I’ve chosen to have it play out through the LFO just to make it feel more alive. Enjoy, have fun!